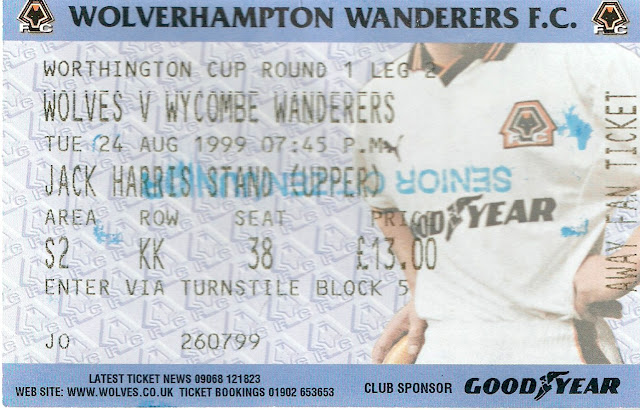 Wolves were founded in 1877 under the name 'St Lukes', changing the name to the current monicker early on in their history. They were founding members of the Football League in 1888 and are one of a handful of clubs to remain in the league for it's entire duration (aside from seasons in the Premier League) They have spent most of their time in the top 2 divisions, and though they have spent a few seasons in the Premiership recently, their heyday was back in the 1950's when they were league champions on 3 occasions. The mid 80's saw the darkest days league wise with them spending a couple of seasons in Division 4 but a couple of quick promotions saw them return to the more familiar surroundings of the second tier.
The club have won the FA Cup on 4 occasions, most recently in 1960 when they overcame Blackburn Rovers in the final at Wembley. On the flip side they will want to forget those couple of seasons in the basement division FA Cup wise. Following a 6-0 defeat to Rotherham United in 1985, the following year saw a defeat to non league outfit Chorley who won at the third attempt after the first 2 games went to replays.  The League Cup has been won twice - 1980 seeing them defeat Brian Clough's Nottingham Forest at Wembley when Forest were at the height of their powers.
In Europe Wolves were runners up in the first ever UEFA Cup final. Despite beating Juventus along the way, they fell just short, losing 3-2 over 2 legs to fellow English side Tottenham Hotspur. Plenty of famous players have donned the Wolverhampton Wanderers shirt over the years and the club can call on support from a whole host of celebrity fans. Gadget Show presenter Suzi Perry, Led Zepplin's Robert Plant and tennis ace Andy Murray are just a few of the famus names who have pledged their allegiance to the club.

My first visit to Wolves turned out to be a right cracker. Back in those days, most of the rounds of the league cup had 2 legs, this was in the days when players and managers didn't harp on about too many games and players being tired. So, the situation from the first leg, Wolves had put out a pretty strong team, and led 1-0 thanks to a Keith Curle penalty, the only goal of the game. They had been the better side but not by a huge margin. We were considered outsiders to get any kind of result in the 2nd leg, even by some of our own fans, as Wolves had a decent side at the time. 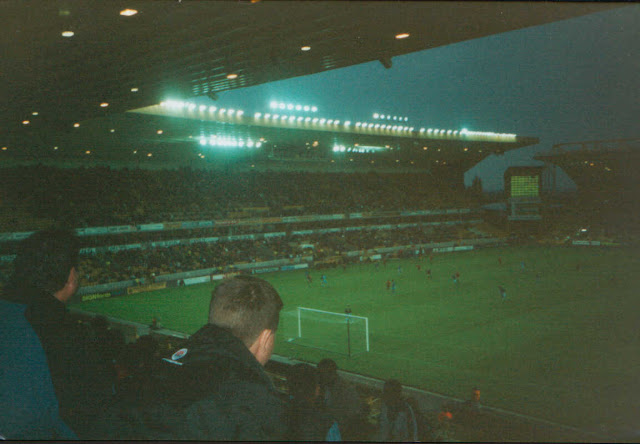 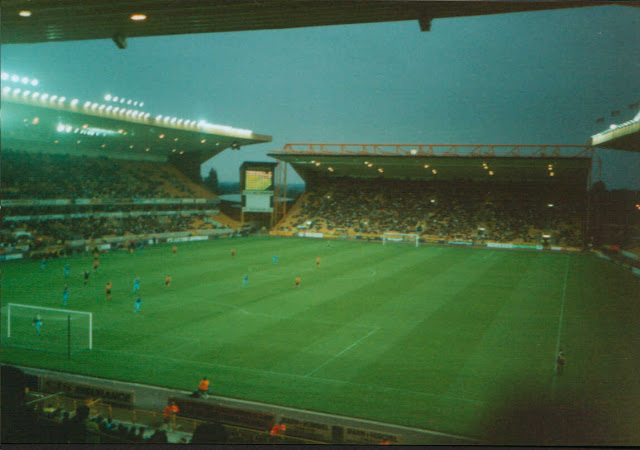 I got my ticket about a week before and it only cost me £1 as I could sneak in as a junior at the time! I travelled up on the day on the supporters' coach, though I don't remember much else about the day. That was apart from the game - Wycombe tore Wolves apart and it remains one of my favourite days supporting Wycombe. Jermaine McSporran tore Wolves apart that night and soon after was subject to a rumoured £1M bid, which was probably exaggerated. In any case, the club rejected any bids, McSporran had trouble with injuries later on and wound up playing for a succession of non-league sides. That night at Wolves remains his finest performance in a Wycombe shirt, the match report below is from the Bucks Free Press. 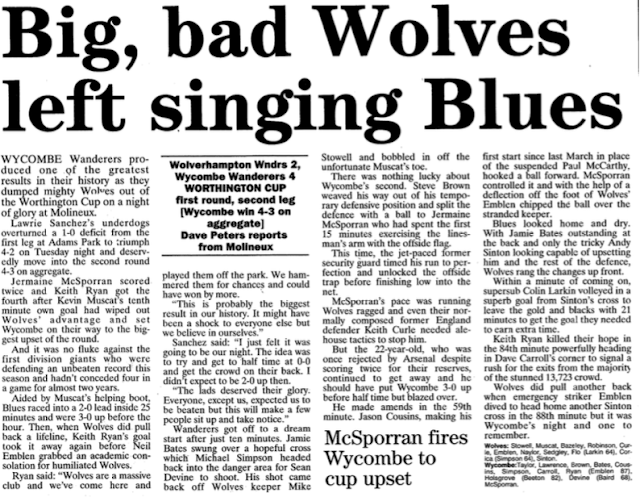 I was always planning on doing a groundhop on this Friday, and my original intentions were in the west and Wales, with my most likely destination being Caldicot, near Newport. However I wanted to go to Wetherspoons to have a Haggis Burger for Burns week, and all other days I’d been busy with Wycombe games. All the grounds on my list were a long way from Wetherspoons and so I’d have to drive there and then to the game, something I really didn’t want to do. I’d recently subscribed to ‘The Football Traveller’ fixture list for £2 a week and the first issue proved it’s worth when it informed me that there was an FA Youth Cup game at Wolves against Met Police on Friday night. I’d long fancied a revisit to Moulineux, even entering a competition late last year to try and win tickets to a Wednesday night game. While I was unsuccessful on that occasion I’d only got basic pictures of the ground on my last visit as digital cameras were not around back then. So after discovering that the town of Wolverhampton was 15 minutes walk away, I decided where I’d be going on this particular Friday night. 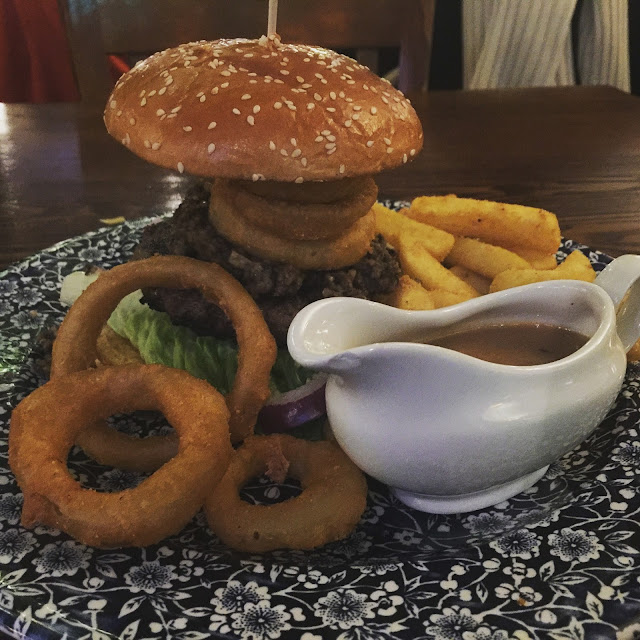 It was a pretty easy day at work and I was finished by 12.30. After getting changed, getting some shopping and having lunch I left at 1.15, stopping for diesel on the way. By the time I'd had a leisurely drive up the motorway it was 3.30 by the time I got to the ground. I'd hoped to park there and emailed the club 2 days ago to ask, but has no reply. Instead I pulled over and looked on the Football Fans Guide website. That sorted me out a treat and I found somewhere on an industrial estate which was free and 15 minutes from the ground. I then killed an hour shopping, getting a few bits from Poundworld and also some new trainers as my work shoes were damp. By then it was past 5, so I went to my intended dinner place of The Moon Under Water. It was a decent Wetherspoons and I had Highland Burger with all the trimmings and a pint of Thistly Cross cider for the full Burns Week experience. It was excellent for £7.25 and I wished I didn't have the responsibility of driving as I had to stop at one pint. I went back to my car, put my shopping in the boot and got my stuff for footy. I walked the 15 minutes to ground, arriving at 6.40. I paid £4 entry and 20p for a team sheet. It was nice to have a relaxed atmosphere with more interference from the stewards, though only the lower tier of the stand was open. I sat in a nice padded seat and checked Facebook while I waited for the game to start. 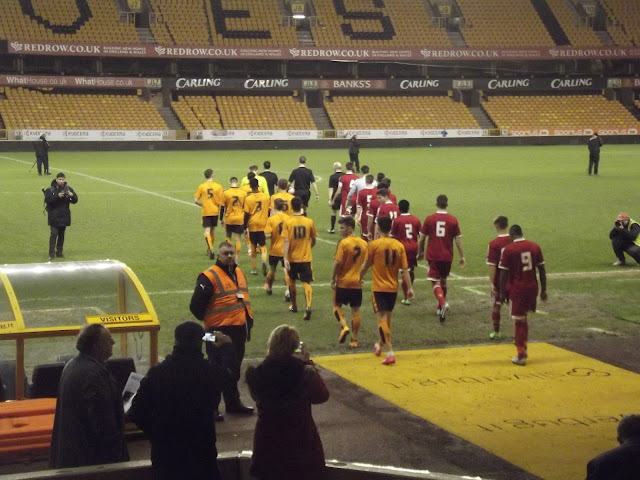 Metropolitan Police FC actually played a pivotal part in the history of my own team Wycombe Wanderers. It was their 3-1 humbling of the Chairboys in an FA Trophy match in January 1990 that hastened the resignation of then-manager Jim Kelman. The club then appointed Martin O’Neill who turned around the teams fortunes and set us on a 5-year spell of unprecedented success, which saw us go from Conference strugglers to Division 2 promotion challengers. The youth team of today’s Met Police side were also rewriting history and their FA Youth Cup story started way back in the Preliminary Round where they defeated Reigate based side South Park 7-1. A 3-0 victory over Hampton & Richmond saw them safely through the first qualifying round before Knaphill were defeated by the same scoreline. Folkestone Invite were defeated by a single goal in the final qualifying round and this set up a game against Dulwich Hamlet which ended in a 2-2 draw before Met Police triumphed 4-2 on penalties. After a long run of home games, they would have to travel at last and must have been ranked as outsiders when they faced a trip down to Somerset to play Yeovil Town. However, another penalty shoot out win saw them awarded a trip to Burnley in the 3rd Round. Again the odds were against them but keeper Callum Lunn was again the hero as they won their third penalty shoot-out in a row to set up tonight’s game. 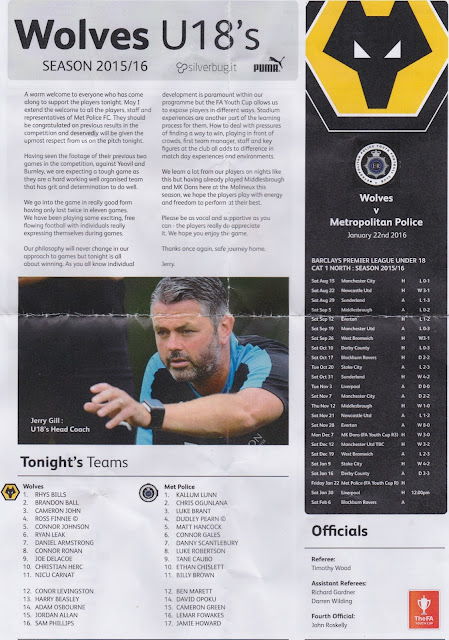 Despite Met Police having the better of the opening period, it was Wolves who opened the scoring on 7 minutes. Good work from the right saw the ball crossed in and Joe Delacoe finished neatly past visiting keeper Kallum Lunn. It was the hosts who then had a period of domination. 27 minutes and they doubled their lead. Lunn parried the initial effort but Dan Armstrong was on hand to follow up from just outside the 6-yard box. 3 minutes later and the game looked to be as good as over, Armstrong getting his second with a header at the far post. Wolves went further ahead in the second half, Connor Levingston finishing from close range, 9 minutes after the restart. With 20 minutes remaining it was 5-0 thanks to a second from Joe Delacoe. The final attendance was announced as 308. Wolves were fully deserving of the result, though the scoreline was a tad harsh on Met Police who worked hard and played some neat stuff at times. After the game, I took the 15-minute walk back to my car after what was an enjoyable game. Within 2 hours I was back home, getting home around 11 and spending the rest of the night online. 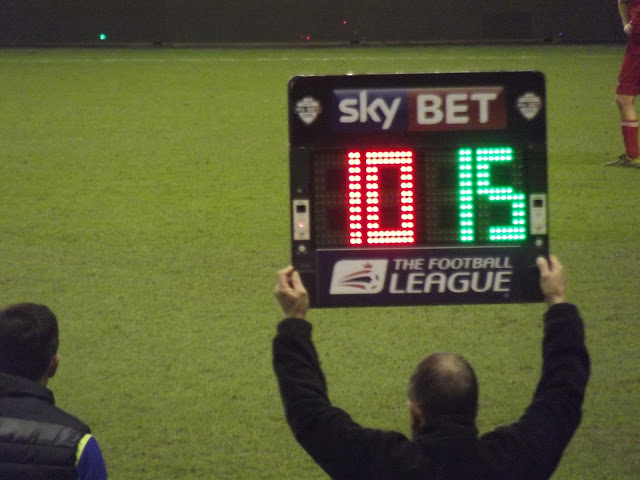 THE GROUND
MOLINEUX is one of the better stadiums in the Championship, having an all-seated capacity of around 30,000. Views and legroom are great and the ground is very easy on the eye. Food in the ground, as to be expected is fairly expensive, so if you have time the town centre just under a mile away is a good bet. There is even free parking along the way - just bung Kennedy Road into your Sat Nav and you are good to go with plenty of spaces. 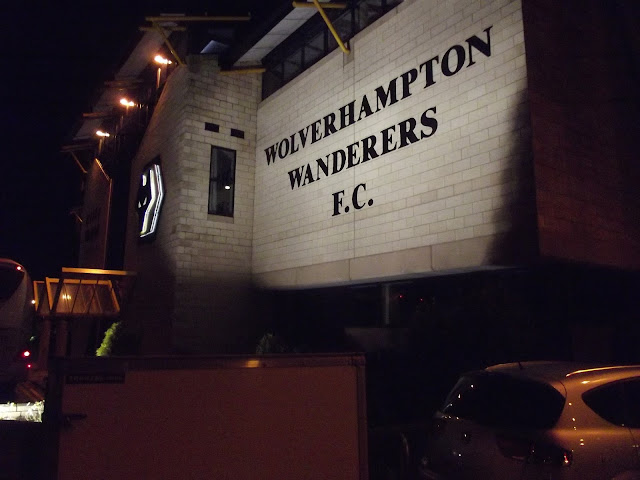 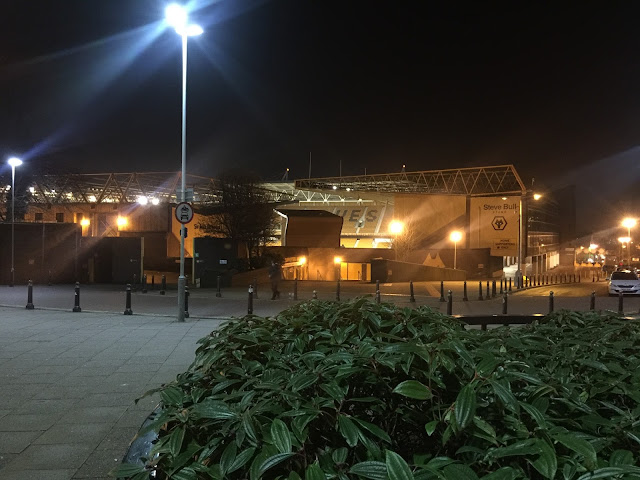 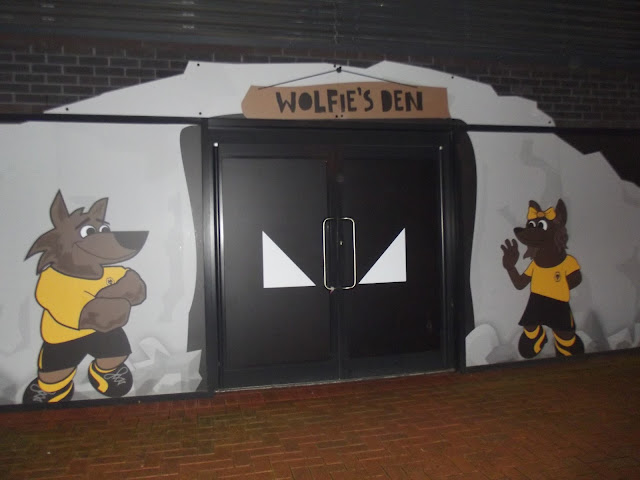 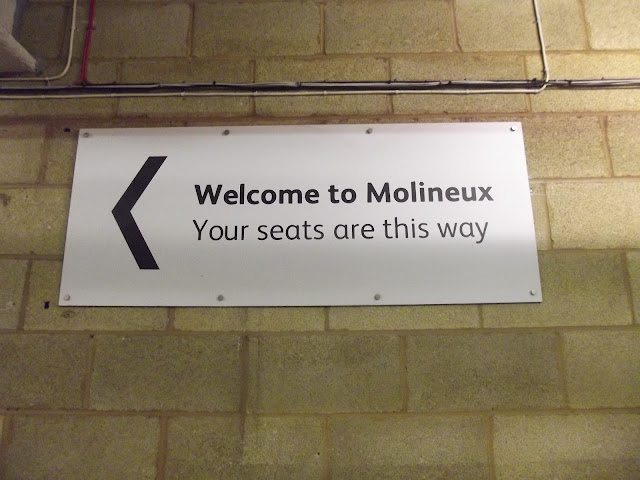 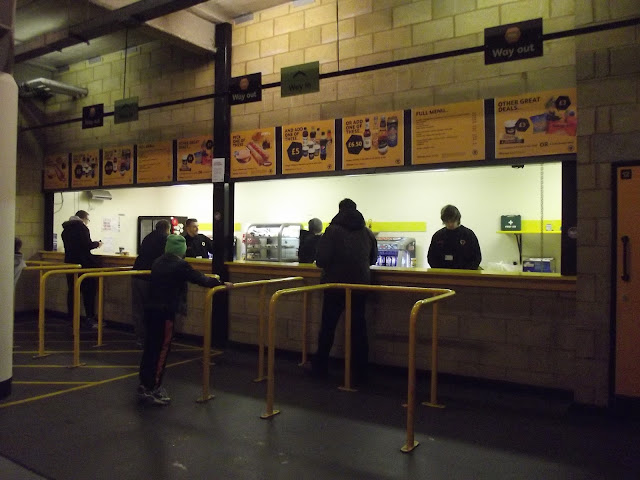 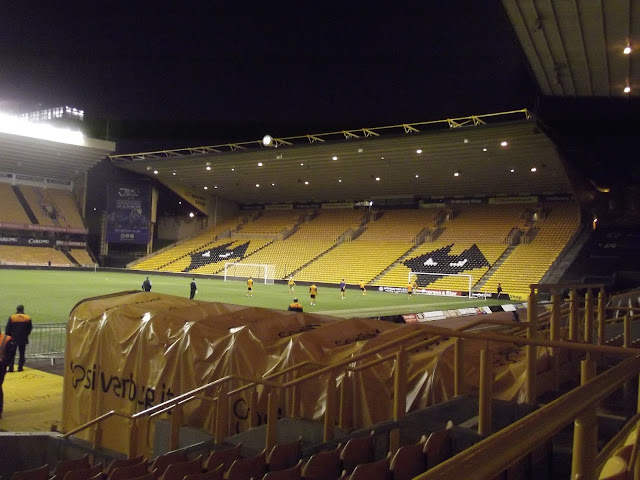 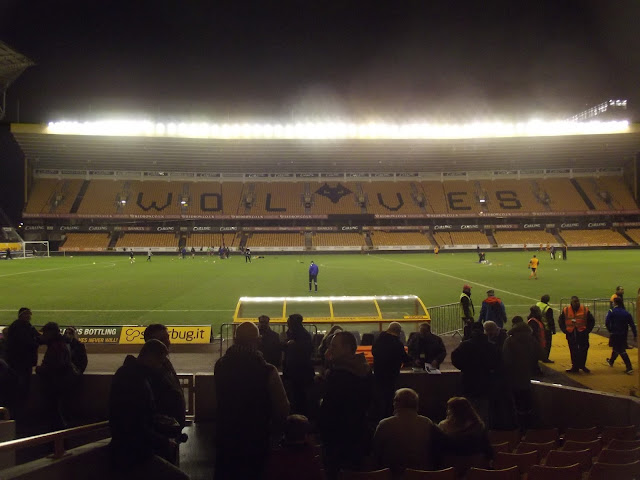 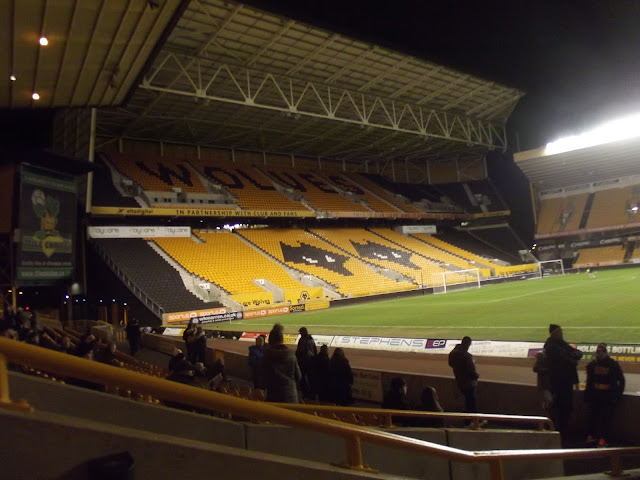 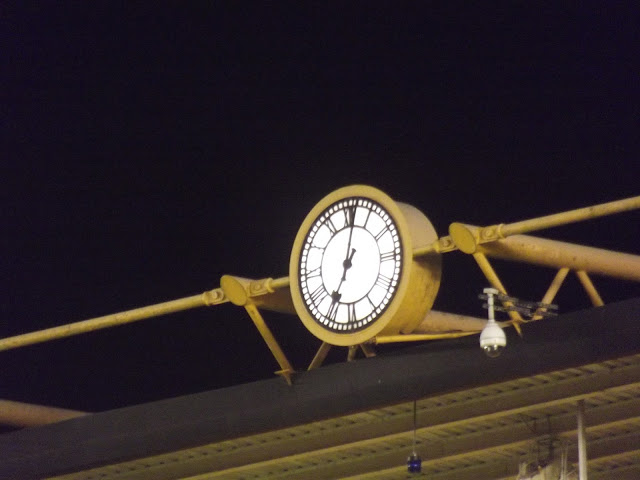 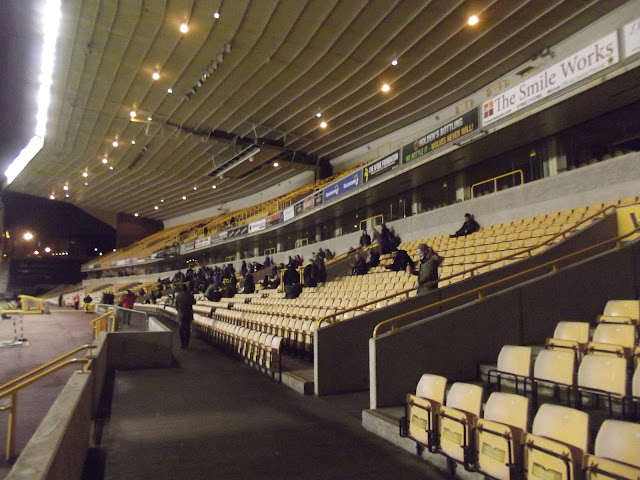