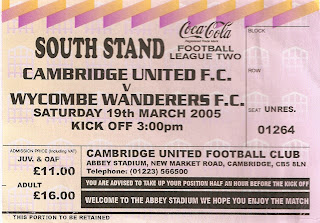 The club were formed in 1912 and originally went under the name ABBEY United until they changed their name in 1951. They spent their early years in the United Counties & Eastern Counties leagues before gaining promotion to the Southern League in 1958. Back in the day there was no automatic promotion to the league but being champions of the Southern League twice in a row was enough to persuade the Football League in 1970 as they replaced Bradford Park Avenue. Inspired management from Ron Atkinson saw them progress up the leagues and in 1980 saw them have their second best ever league finish of 8th in the second tier under John Docherty after Atkinson had left to join West Bromwich Albion 2 years previously.

The next couple of decades were turbulent with the progressing up and falling down the leagues at rapid rates. Their last real heyday came under John Beck when in 1992 they finished 5th in Division 1, losiung against Leicester City in the playoffs to get into the Premiership. Things soon declined though, mainly due to financial issues and by 2005 they were back in non league football. It took them until 2014 to climb back when promotion was sealed by beating Gateshead 2-1 in the playoff final at Wembley. 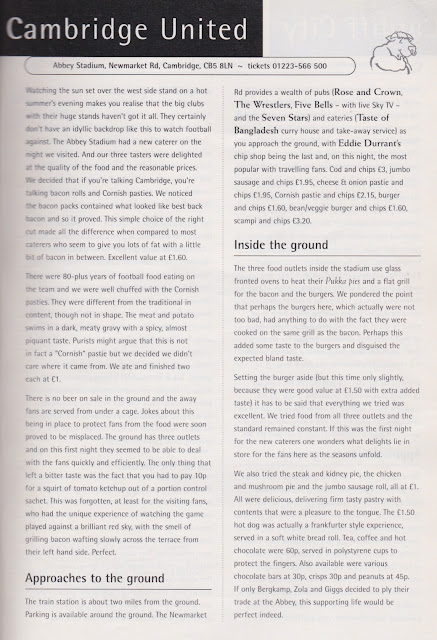 The FA Cup Quarter Final was reached twice in a row at the start of the 1990's but defeats to Crystal Palace and Arsenal denied them a place in the Semi Final.  They were also League Cup Quarter Finalists in 1993 as they lost out to then Premiership side Blackburn Rovers. They were runners up in the Football League Trophy in 2002 but 12 years later won the FA Trophy, beating Gosport Borough 4-0 at Wembley Stadium. On the flip side they will want to forget a 5-0 humbling by one time local rivals Histon which occurred in the 2006/07 season. One lesser known award came at the end of the 1997/98 season when the club were nominated as doing the best food in the Football League, that at least according to the Colman's Football Food Guide - a one time publication distributed free with the now defunct 'Goal' magazine.

Several players have played for both Wycombe & Cambridge. Most notable is Dion Dublin. Back in 1988 when he was a 19 year old, Jim Kelman signed him on loan for the Chairboys. The story goes that Wycombe were offered Dublin for £5000, but the club opted to spend the money on decorating the boardroom instead. Dublin would go on to have a glittering career, appearing for the likes of Manchester United, Coventry City and Aston Villa. He'd not be the last big name player that we would let slip through our fingers. 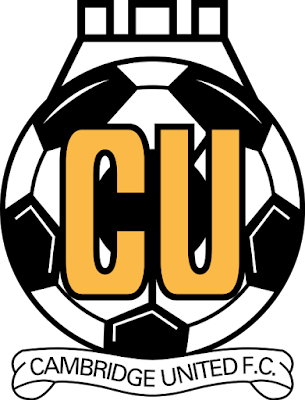 My first visit to the Abbey Stadium came at the end of the 1999-2000 season in a game that was a typical end of season encounter, where both teams had nothing to play for. The day was notable for the debuts of Ben Townsend and Roger Johnson, the latter going on to have an excellent career, before moving to his latest club Wolves. Wycombe eventually finished 12th that season, Lawrie Sanchez starting to have a positive effect after saving the team from relegation the previous season. And the season ended with a win - goals from Andy Baird and Jermaine McSporran gave Wycombe a win, despite Cambridge dominating the first half.

The game was notable for me seeing my mate Paul punch Ian Baker in the face after he insulted Paul's wife Sue, with Baker landing in a cow pat on walk through some allotments & fields from the away coach parking to the ground. Mr Baker recovered well, going on ti get a good job in media, indeed he was the reporter that Nigel Pearson called an Ostrich in a press conference during his reign as Leicester manager. 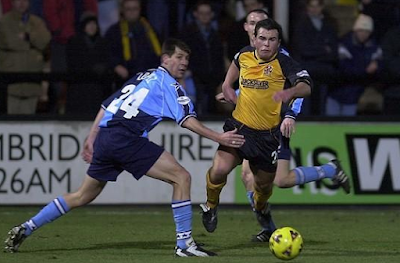 After an excellent start to his time at the club, Lawrie Sanchez's reign was turning sour. After performing miracles to save us from relegation in 98/99, getting us to the FA Cup Semi Final in 2001 and get us within spitting distance of the playoffs in the March of the previous season, we had fallen away badly and finished mid table. The season had started badly with us struggling in the lower reaches of the League 1 table, though we never looked like going down to be honest, something that would be a big achievement if it occurred today.

This game was notable for the appearance of Carlos Lopez, the mystery trialist who looked like Lawrie Sanchez's love child. In his only ever appearance in the football league he gave the worst performance of anyone I have ever seen in a Wycombe shirt as Shane Tudor tore him apart all evening. The bored Wycombe fans watched their team barely register a shot all game and resorted to singing the entire lyrics of Queen's 'Bohemian Rhapsody to keep themselves amused. 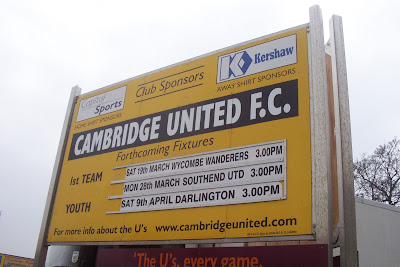 
Wycombe, now under John Gorman and recovering from the reign of Tony Adams travelled to bottom of the league Cambridge hopeful of a win. The U's were non only struggling on the pitch - mounting debts were threatening their very existence and as a result a 'Fans United' day was organised and that bought in nearly 1500 extra fans It was a poor performance from Wycombe and Gus Uhlenbeek's goal was not enough as Cambridge scored 2, including a spectacular 30 yard strike from Tes Bramble. 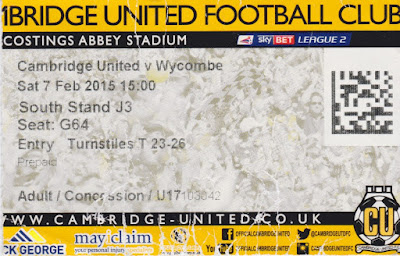 For the first time I drove to Cambridge, with Anwar, his son Hicham and Lewis as passengers. The journey there was fairly uneventful until Hicham decided to be sick everywhere and we need to stop to clean it up. Still, we still got there nice and early and I made my way across a nice park to a brilliant pub called The Haymakers. There I had a couple of pints of good cider and a freshly made pizza. It was a little more expensive than I normally pay but it was good to treat myself to something good.

As for the game, a solid performance saw us continue our promotion challenge, with Hogan Ephraim getting the only goal of the afternoon. The game was more notable for a Cambridge's Cameron McGeehan being sent off after our keeper Matt Ingram went down very easily after a light kick. The fact that Ingram had twice stood on the Cambridge player's toes might have had something to do with it and although he lashed out, barely any contact was made. 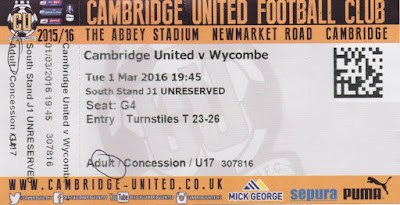 Due to the discovery of the Haymakers pub and the fact that the Abbey Stadium is probably my favourite ground in League 2, chances of a revisit were high, with the game being pencilled in pretty much as soon as the fixtures came out. I'd have preferred a nice sunny afternoon, rather than an evening at the back end of winter but that's the way the fixtures fall. I sorted out giving Anwar a lift again, also buying my ticket the Saturday before when we beat Bristol Rovers 1-0.
After a good night's sleep on the Monday I was unable to complete my usual Tuesday morning walk down town as it was raining. So I left a little bit early, stopping in Aylesbury to get some stuff for the game before picking Anwar up at 4. We had a good journey over to Cambridge and by 5.40 we were parked up near the ground. That said there must have been a problem on the Milton Keynes route as it took us via the M25 and M1 though we made good time and were still there in good time and with little delay. Owing to my previous experience I headed straight for the Haymakers pub, enjoying a couple of new ciders. The place was excellent again, with the added bonus of being dog friendly should you wish to take your pet there. On the way back I stopped at the ’Small Fry’ chippy, having a decent portion of chips for £1.50 before stopping at my car to pick up my stuff for the game. 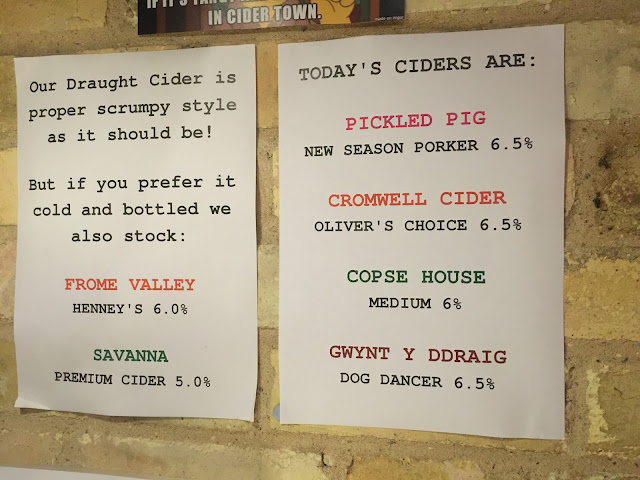 We got back to the ground at around 7.10, having a nice chat to various Wycombe fans before the game, the mood was good and so had been the evening, though as is so often been the case with Wycombe, that evaporated soon after kick off. Though it wasn’t too bad up until Cambridge scored on 28 minutes. The goal was credited to the home side’s Josh Coulson, but to me it was an Anthony Stewart own goal after it was heavily deflected on it’s way in. As with our previous 2 defeats at this venue, we absolutely stunk the place out. There was no idea going forward, no width whatsoever and the negative tactics and blatant cheating that we have earned a reputation for was there for all to see. Team selection was questionable too, with once again the substitutions being made far too late. Sam Wood has been woeful all season, yet he continues to get chance after chance while Ryan Sellers has to rely on a few minutes here and there. Michael Harriman, imperious on loan, is a shadow of the player he was on loan since getting a 3 year contract. And add to that our tiny squad has some decent players who could perhaps change things for the better and you could see why it was a miserable evening for the 325 strong Chairboys following. 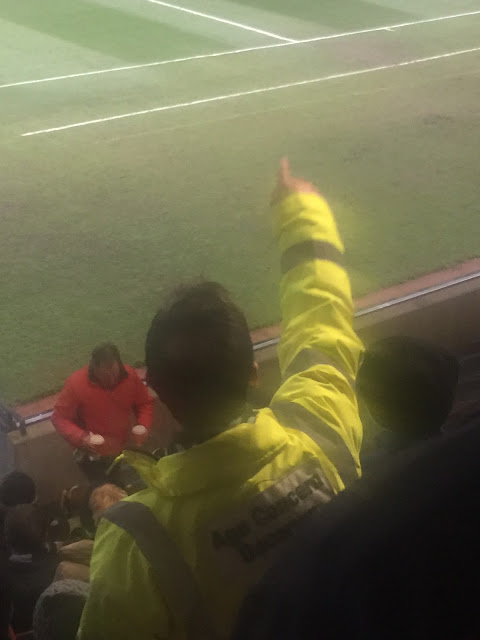 Myself and Anwar left our seats as soon as the clock hit 90 minutes and walked down the front of the stand. There were a few boos at the final whistle. I did not partake but the players certainly were not going to get my applause either. We made our way back to the car, chatting to some friendly Cambridge fans along the way. After a good journey home I dropped Anwar back at his, before getting home at 11.20. As usual I couldn’t get to sleep straight away, only dropping off at 2am, leaving me with 2 hours sleep. Though I wasn’t tired the next morning, I caught up with a few hours shut eye the following afternoon, with only one more day at work after that before my first week off since October. 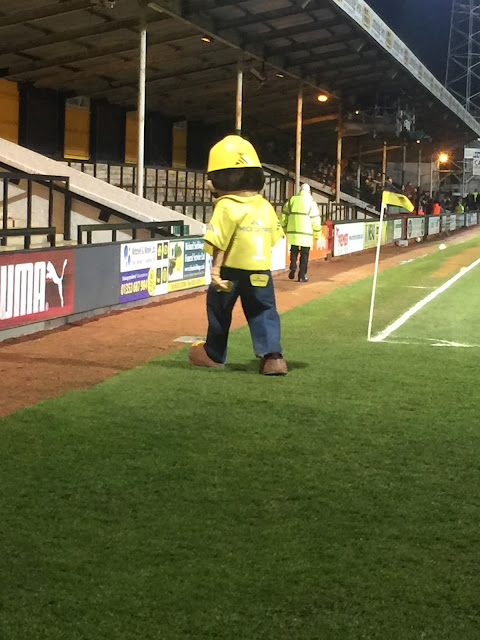 THE ABBEY STADIUM is located nearly 2 miles from the city centre, but there are still plenty of places nearby. Your best bet is to walk across the park to the Haymakers pub, where there is also a  good chip shop. As for the facilities at the ground, the tea bar won an award for being the best in the Football League by Colman's Football Ground Food Guide but that was back in the late 90's. There is a pretty standard club shop outside the ground selling the usual array of merchandise. 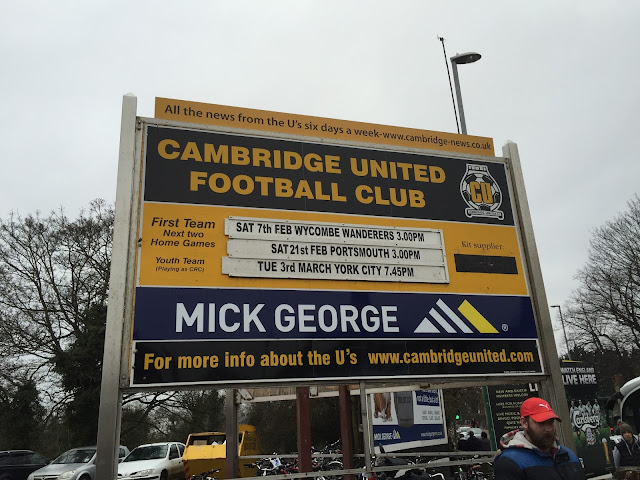 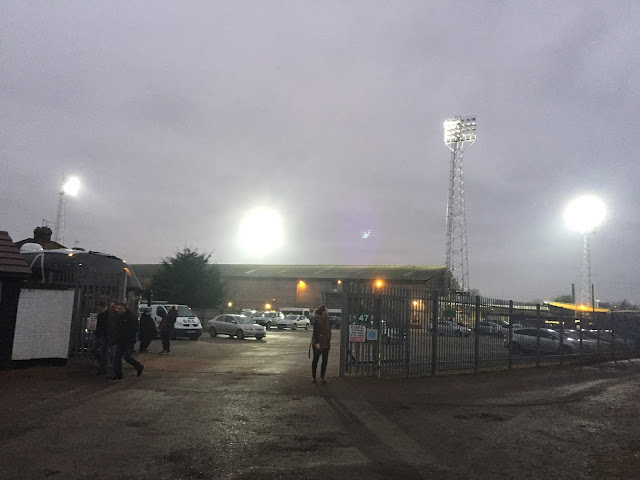 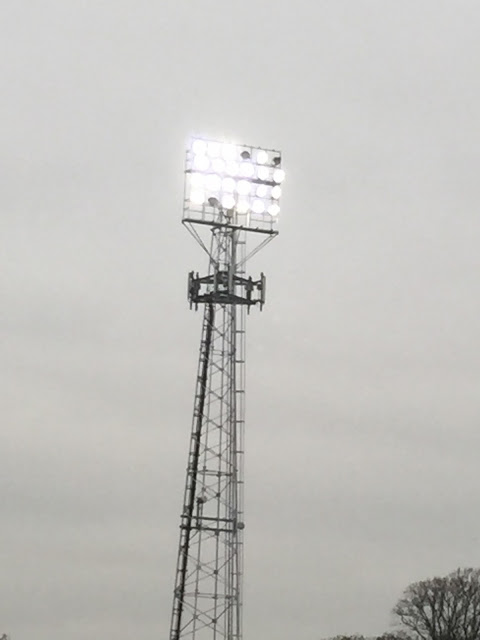 THE MAIN STAND is the original seating area at the ground and holds around 2500, It looks like it originally had terracing at the front, with extra seats added after but I can't be sure. 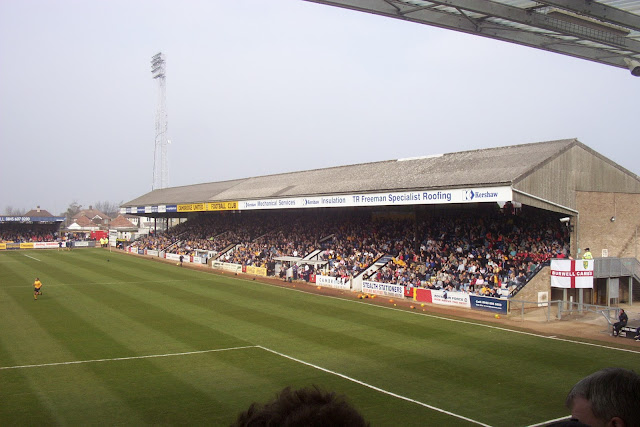 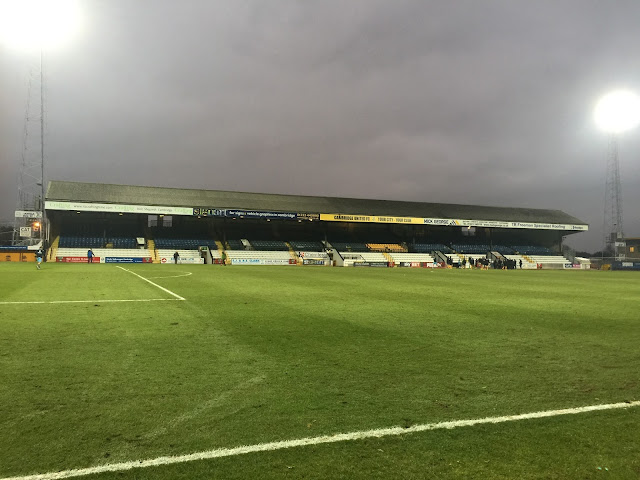 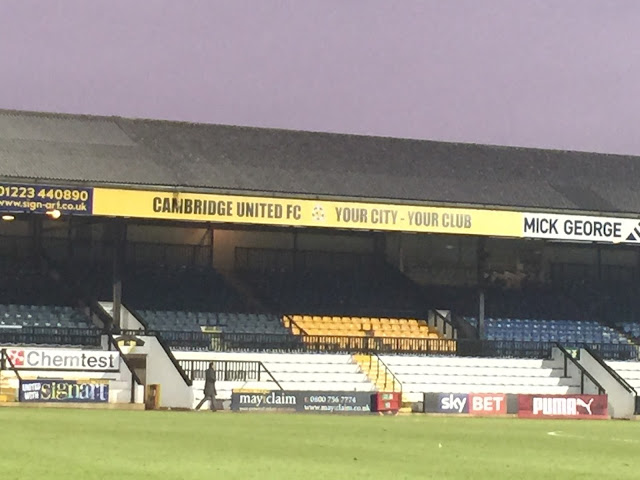 Opposite is THE HABBIN STAND and this is probably my favourite part of the ground. A fairly rare thing in the League being a side terrace. In recent years the walls have been painted in the club colours which really adds to the character of the stand. 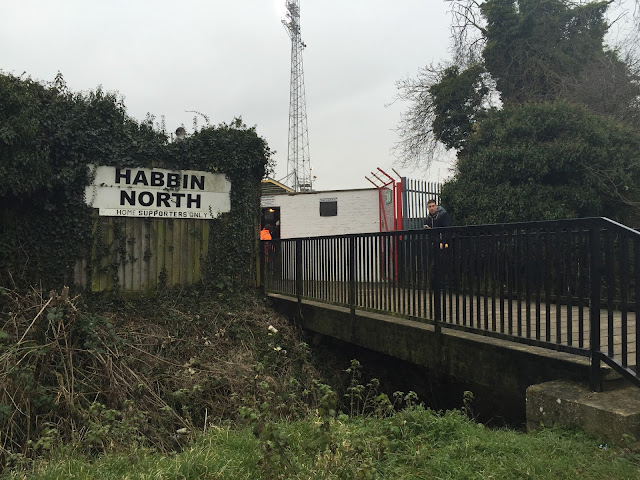 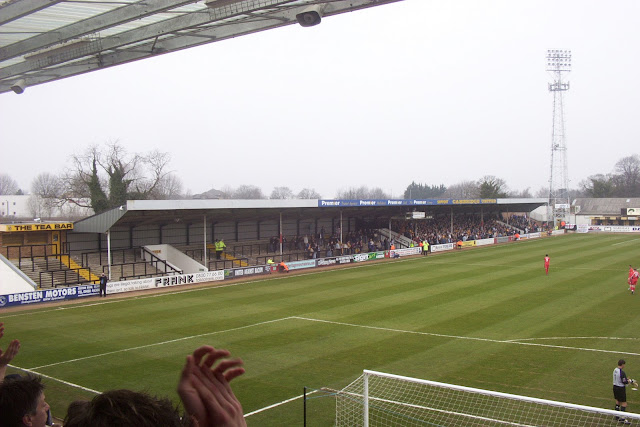 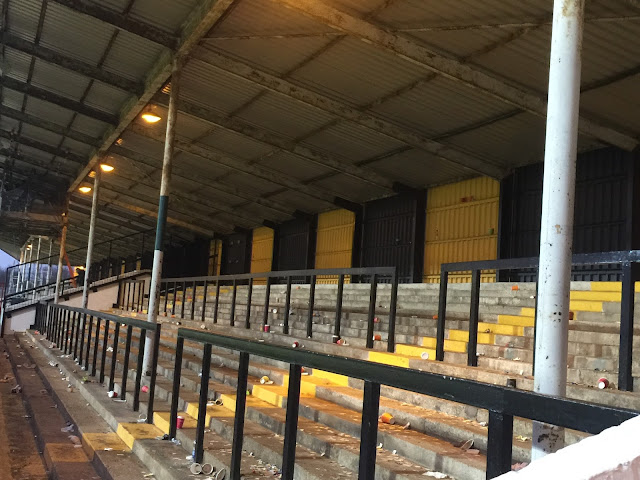 THE NORTH TERRACE would be a fairly small and unremarkable covered terrace normally. But the club have really gone to town decorating it and it looks absolutely fantastic. It holds around 800 and there is a small disabled enclosure to the left of it too. 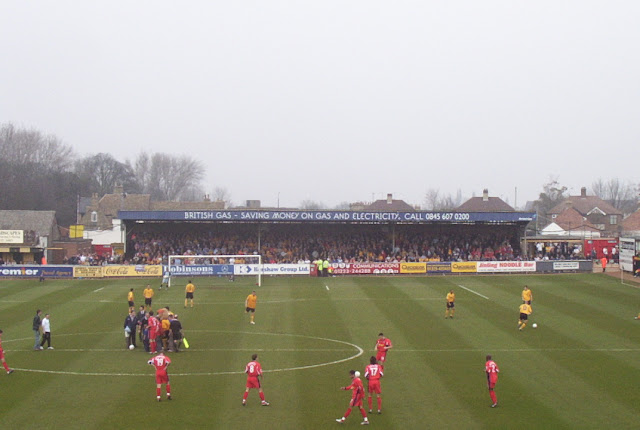 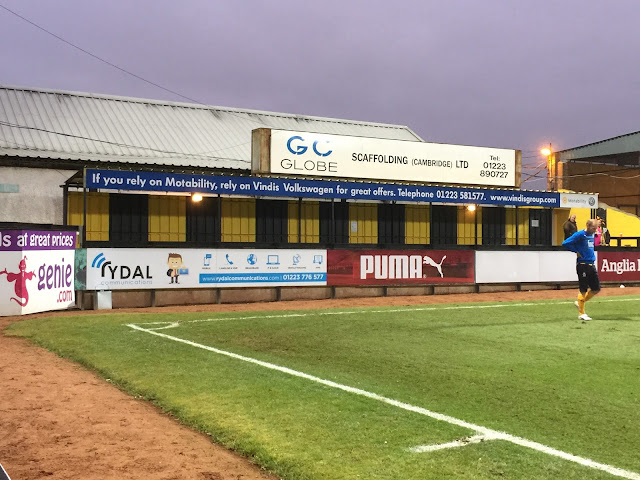 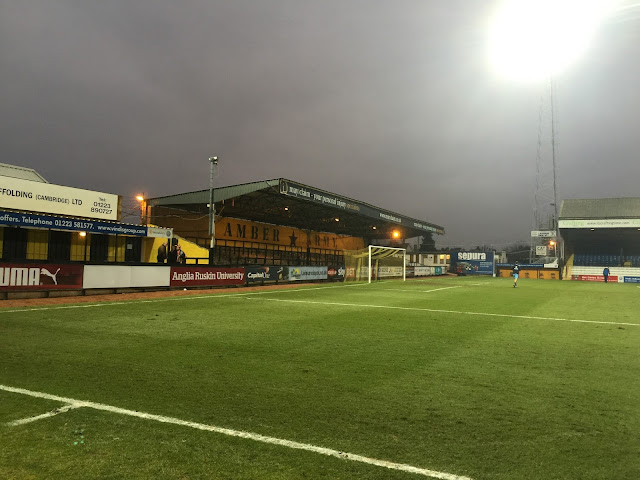 The last part of the ground is THE SOUTH STAND which replaced an uncovered terrace. This is an excellent stand and the most modern of the lot, having been built in the mid 2000's. This is given over to away fans and offers excellent views as it is elevated above pitch level. 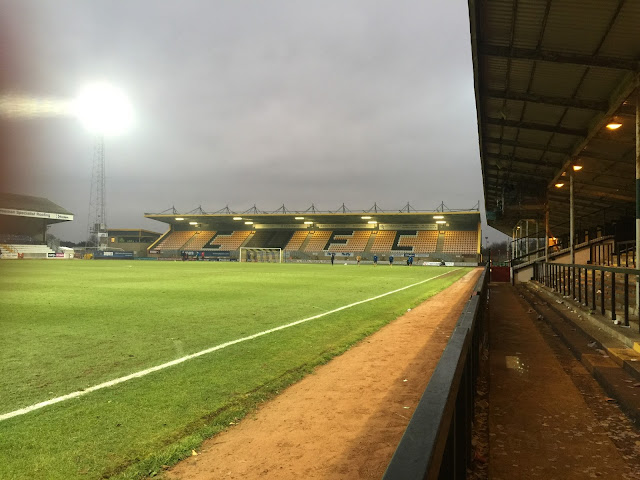