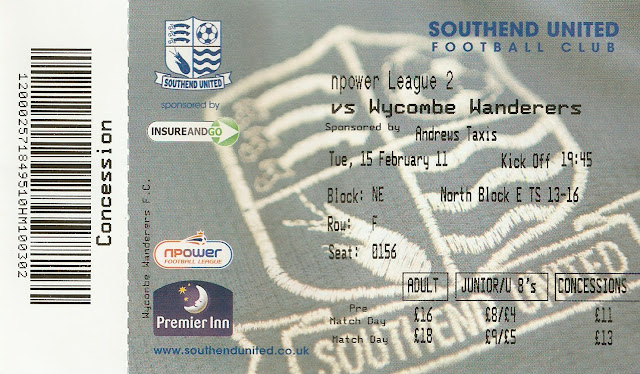 1: The club was established in 1906 and spent the first 14 years of their history in the Southern League. They were champions of its second-tier twice in a row in their first two seasons, being promoted on the second occasion. Despite a 12th place finish in their first season, they were relegated back in 1912, bouncing back after a couple of seasons when they finished as runners-up in 1913. After a break for the first world war, they enjoyed their best ever finish of 11th in 1920.

4: In the League Cup, Southend United reached the Quarter Final in 2007. They beat AFC Bournemouth, Brighton & Hove Albion, Leeds United and Manchester United prior to a narrow 1-0 defeat at Tottenham Hotspur. The hero of that run was striker Freddie Eastwood who scored the goal to beat Manchester United.

5: The club has played at Roots Hall in nearby Prittlewell since 1955. It was not until 1988 that another Football League side changed ground when Scunthorpe United moved to Glanford Park. Plans are afoot to move to a new ground at Fossetts Farm - though they've been saying the same thing for years. Previous homes include Kursaal (situated on the current Roots Hall site) and Southend Stadium which carried on being used for greyhound racing up until 1985 when it was demolished.

7: Southend United's main rivals are neighbours Colchester United. The Shrimpers have slightly the better record against their rivals with 32 wins to Colchester's 28 and 17 matches ending in draws. Other lesser rivalries are enjoyed with Leyton Orient, Dagenham & Redbridge & Gillingham to a lesser extent.

9: The two clubs have played each other 20 times with Wycombe winning 7, Southend winning 9 and 4 draws. These do include 4 games in the Southern League in the early 1900s. At Roots Hall, the record in the league is all square with 2 wins for Southend and Wycombe apiece and 2 draws. Wycombe also won 1-0 in the December 1997 at Southend in the Football League Trophy. 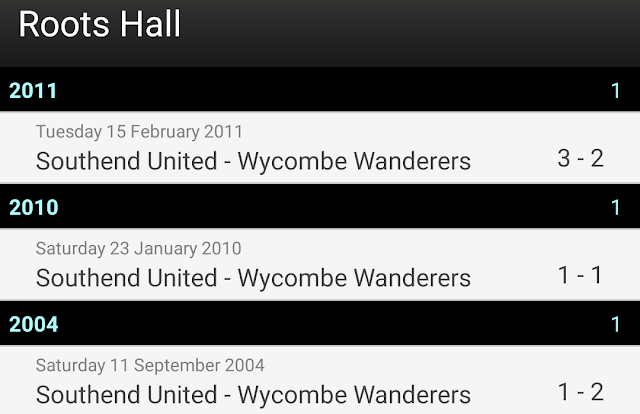 I don't recall a huge amount about my previous trio of visits to Roots Hall. My first came in 2004. Wycombe had been relegated from Division 2 the previous season and were now in the newly renamed League 2. They had started well and travelled to Southend in high spirits. Despite the hosts have the better of the game, it was Wycombe who won 2-1 after Mark Bentley gave Southend the lead, but Wycombe came back with goals from Nathan Tyson & Danny Senda. This win took us to the top of a football league for the first time since we joined in 1993. Sadly it wasn't to last however, we didn't win another game for ages and Tony Adams departed in November with the team in 17th place. The nature of his leaving was bizarre, the first chairman Ivor Beeks knew of it was when he switched on his TV and saw the news - he wasn't even notified by Adams. 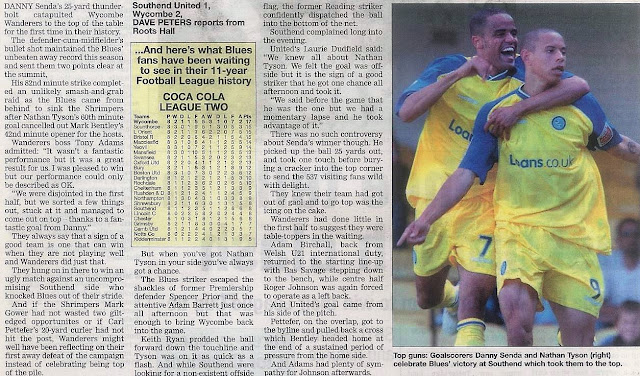 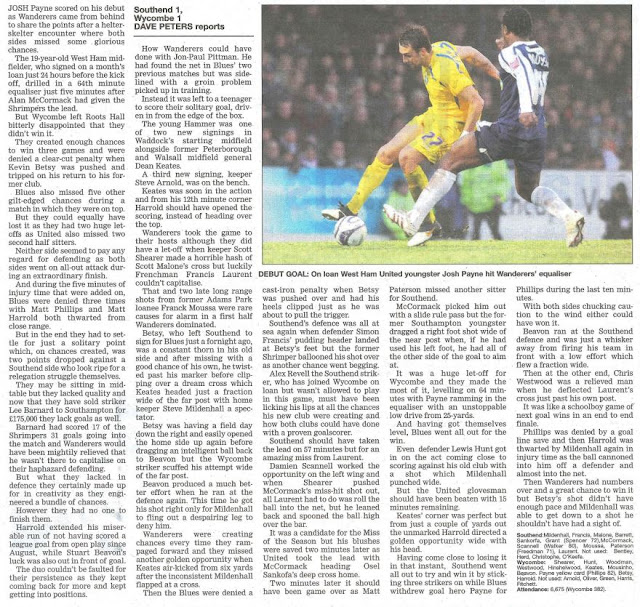 Further visits came in January 2010, that day we came from behind again, this time Josh Payne equalised after Alan McCormack had given Southend the lead. The midfielder had only signed on loan from West Ham United the previous afternoon but he was the hero that day. He certainly had an eventful career afterwards, dropping down to non-league and being sent to prison for a year after assaulting someone. My third visit came just over a year later, where we finally faced a defeat. I went with my Dad & Brother and remember us going for a decent pre-match curry. This was also around the time that our previous owner was trying to move us into a new ground against the fans will and so there was much amusement when I started the chat 'He's fat, he's round, he's wants to sell our ground, Stevie Hayes, Stevie Hayes'. Thankfully, those plans were vetoed by the council in a rare show of common sense. That evening, we took the lead through Jon-Paul Pittman but Barry Corr and Kane Ferdinand gave Southend the lead. Nicky Bull saved a penalty from Blair Sturrock before Wycombe thought they'd got a share of the spoils thanks to a Scott Rendell penalty. However, the man who conceded the penalty, Craig Easton, made amends after he took advantage of poor Wycombe defending to score an injury-time winner. 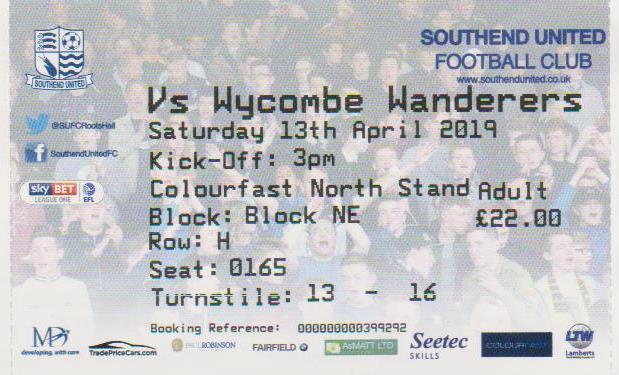 This would be my 7th and final Wycombe Wanderers away game of the season. I'd originally intended to do a lot more but I'd missed out on Plymouth Argyle, Portsmouth, Fleetwood Town, Sunderland and Barnsley for varying reasons, mainly financial. The night before, I had a sober Friday night and an early night. The former was put severely to the test by a stressful week at work, thanks to many factors, not least that they are planning to change our contract by force, rather than what was previously a voluntary option. In short, it means that rather than the present situation where I have fixed hours, it would mean that they could call me in when they want, potentially ruining football plans. It's funny how 'flexibility' only works one way. Also despite the much-vaunted wage increase, it would also mean losing paid tea breaks, bringing the wage down to something comparable to what I'm currently getting. I figured there was no point worrying about something that is beyond my control though. I managed to get in bed at 8.30 and asleep at 9.30 but it did have the drawback of me waking at 5.30 the following morning. I had nearly 4 hours to pass but come 9.20 it was time to go down the local shop and buy a paper before getting the coach at 9.45. It was a double win for me what with getting a double seat to myself and my Mum paying for my coach fare. Despite only being a fairly short journey, it dragged a bit, but we were there by 12 after driving through a hail storm which put my walk to another pub at risk. 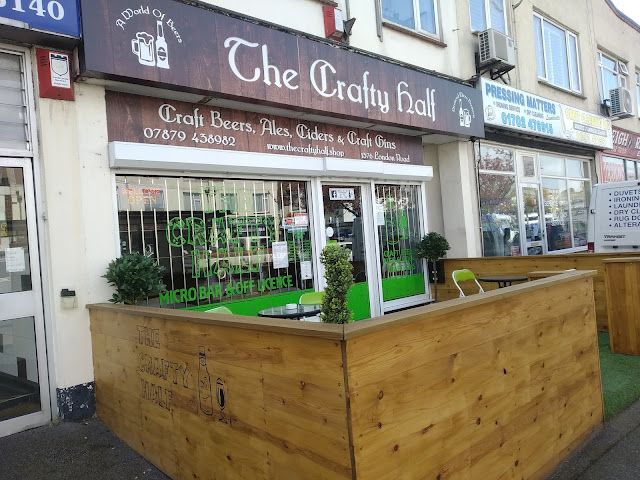 But all was fine for my walk to Wetherspoons 188, the Elms in Leigh-on-Sea. There I had Sausage Beans and Chips for little over £4 as well as a pint of Black Dragon. It was good, though I had bigger fish to fry. Next up was the Crafty Half Micropub where I had a couple of bottles of cider that I had not had before. There was a small issue finding the coach, but soon we were on our way. We got to the ground around half an hour before kick off and took a seat to the left of the goal. The game was never going to be a classic, what with both teams struggling, so it was no shock when it was goalless at the break. The second half saw Wycombe start to carve out chances and Southend continue to offer little. Not for the first time, Akinfenwa was the hero, firstly sliding home Scott Kashket's cross and then heading home a goal a few minutes later. I was delighted that Wycombe had won their first game in 13. After applauding the team off, I got back to the coach pretty sharpish, listening to football phone-ins on the may home.  I decided to stop in Wycombe on the way time as I wanted to go to Lidl to pick up various things. I also popped into the local shopping centre to go to the toilet and use the cash machine although I had a little trouble getting out after I found most of the doors locked. Eventually, I found my way out through the side exit and made my way to Wetherspoons. As usual, Wycombe was dreadful for drinking and the Barbourne Cherry Bakewell 'cider' was one of the worst drinks I'd ever had. I decided to walk to the local Chinese takeaway, Peking House which was excellent and good value as ever with salt and chilli chips costing just £2. I listened to the Grassroots Gossip podcast on the way home which was really interesting and got in just in time to see the goals on TV. It was then the standard Saturday night watching Match Of The Day before going to sleep around midnight.

ROOTS HALL is now an all-seater stadium. Some of the stands were former terraces with seats bolted onto them, so the views are not the best. Away fans are located behind the goal in the North Stand, which is probably one of the worst for this, but it isn't too bad. Behind the other goal is probably the most modern stand, a 2 tiered double-decker stand, whilst the 2 side stands are pretty similar. There aren't really any pubs that let away fans in near the ground, but there is a half decent chippy. 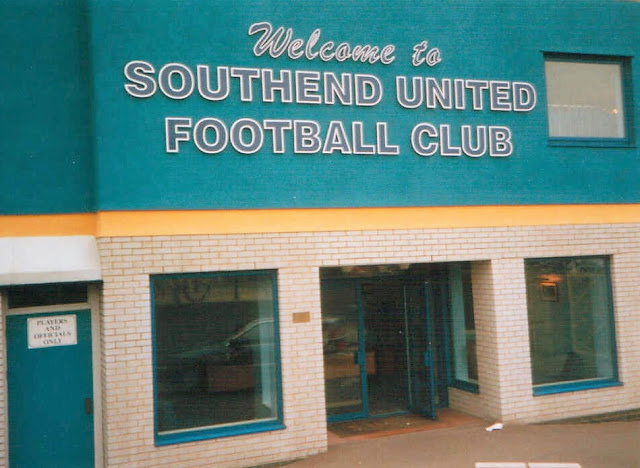 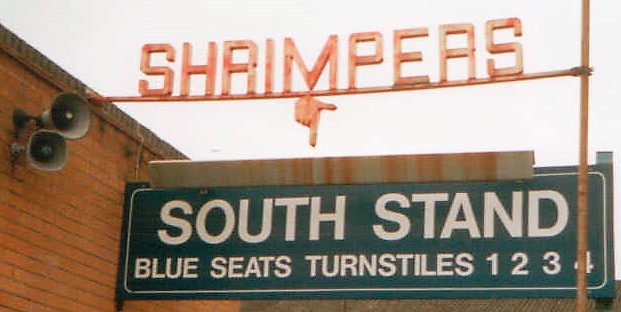 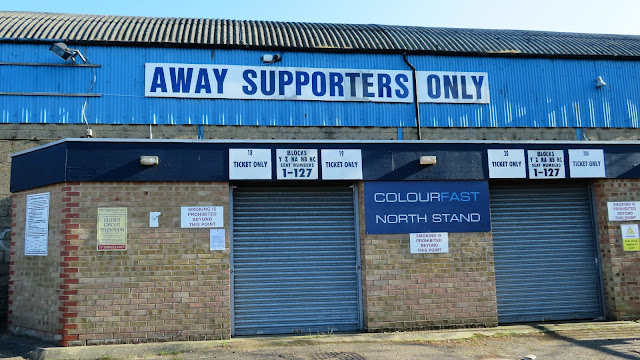 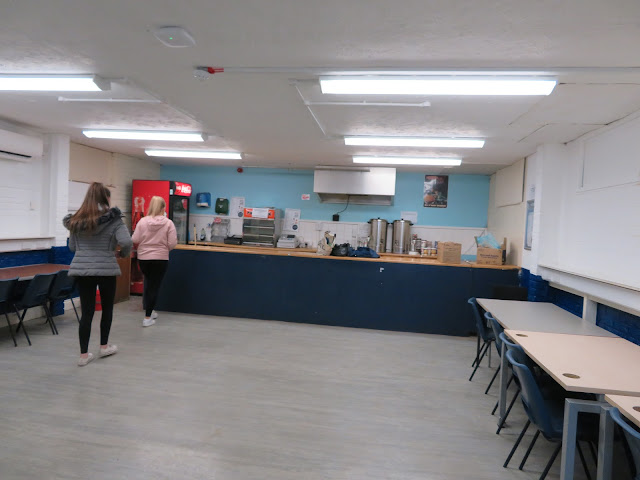 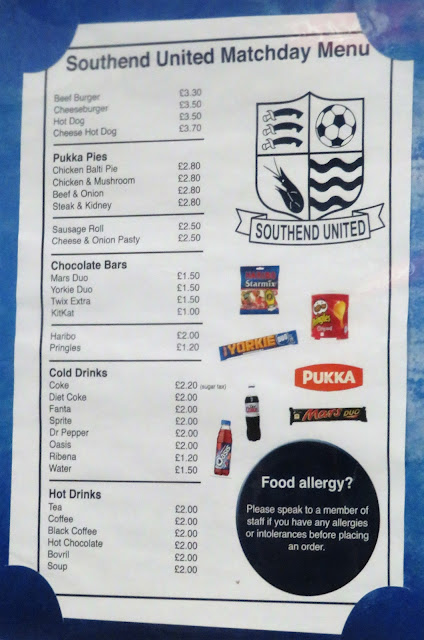 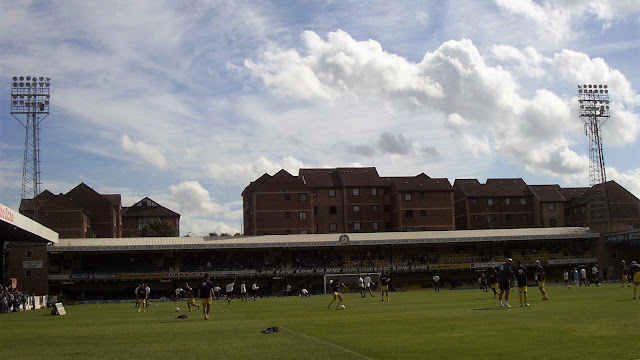 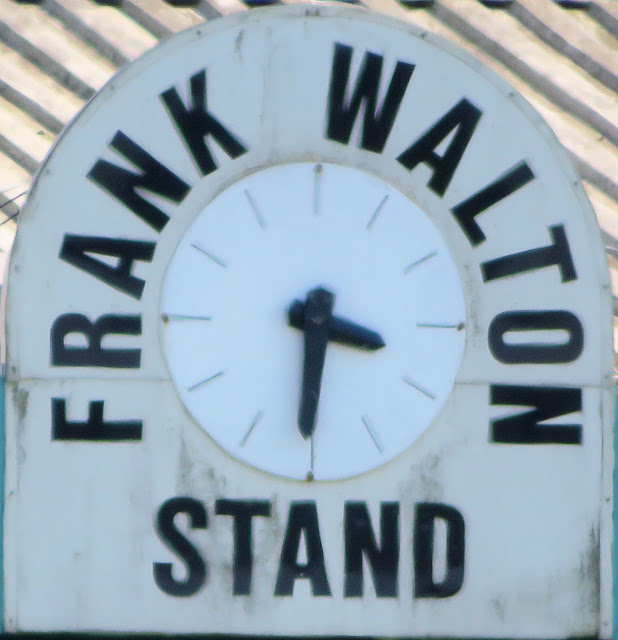 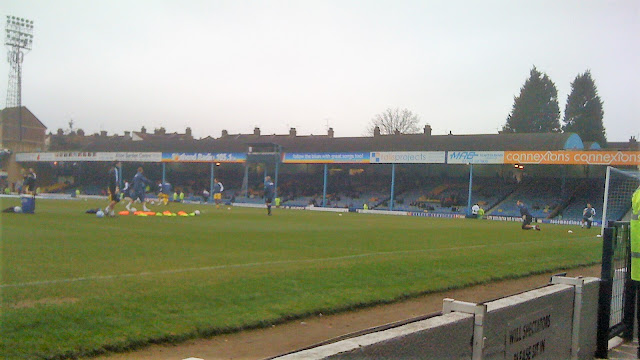 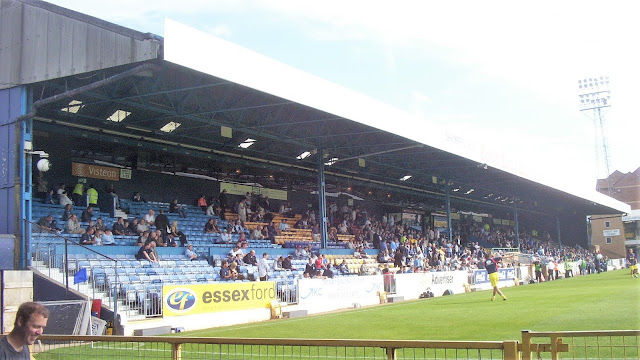 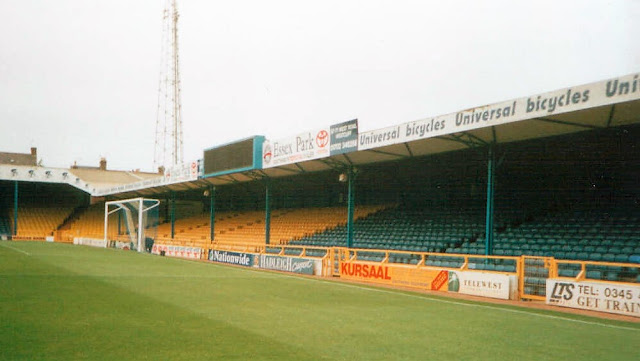 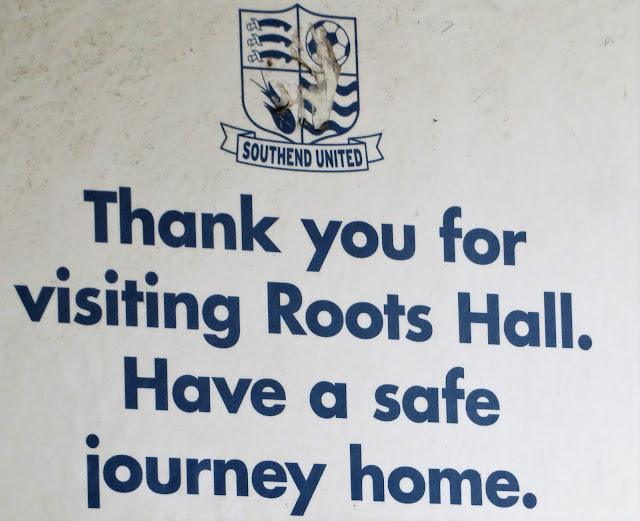