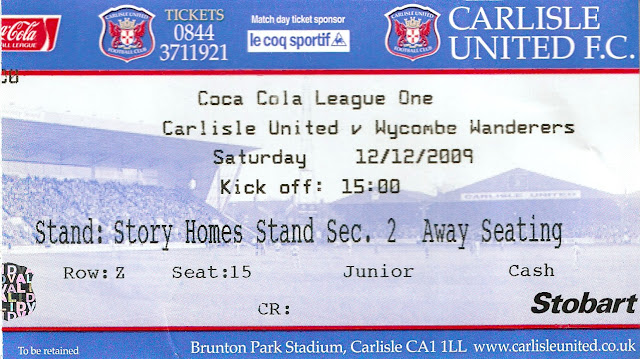 1:  Carlisle United FC was established in 1904 when they took over Shaddongate United's ground. They moved to Brunton Park in 1909 and were a non-league side until 1928, playing in leagues such as the Lancashire Combination and North East League.

2:  For the 1928/29 season, the club joined the Football League. They've had one season in the top flight - 1974/75. Despite winning their first three games to go top of the table and doing the double over Everton, they'd go on to finish bottom. This was in the midst of Carlisle's most successful period when they were regular finishers in the top half of the second tier.

3:  After their sole season in the top flight, a period of inconsistent form followed. The nadir came in 2003/04 when after several near misses, they were finally relegated to the Conference. They'd bounce straight back, however, winning the playoff final against Stevenage Borough after a third-place finish in the league.

4:  Carlisle United's best run in the FA Cup came in 1974/75 when they reached the Quarter Final. After beating Preston North End, West Bromwich Albion and Mansfield Town, they lost 1-0 at home to eventual finalists Fulham. Their most embarrassing result in the competition in 1999 as they lost 2-1 at non-league Ilkeston Town.

6:  The Football League Trophy has been Carlisle United's most successful competition. They've reached the final six times, winning it twice. In 1997 they beat Colchester United 4-3 on penalties after a goalless draw. They didn't need penalties in 2011 as they narrowly beat Brentford 1-0 at Wembley Stadium.

7:  Carlisle's record win came in 1928 as they beat Hartlepool United 8-0. Eleven years later, they suffered their record defeat as Hull City beat them 11-1.

8:  In local football, Carlisle have won the Cumberland Cup eight times and have been runners-up four times.

9:  Record appearances for the club is Alan Ross who played 466 games between 1963 and 1979. Record goalscorer is Jimmy McDonnell with 128 goals between 1928 and 1932. The record sale came when Matt Jansen was sold to Crystal Palace for £1.2m in 1998 after turning down Manchester United previously.

10: Due to their geographical isolation, Carlisle United can't lay claim to many celebrity fans, the only ones I could find were actresses, Helen Skelton and Roxanne Pallett.

My first visit to Brunton Park came on a cold November day in 2005. I was staying the weekend in South Shields to cut down on the travelling when I got up there. I had a good Friday night shopping in the massive Metro Centre in Gateshead, before going out on the town for a few pints. The day after, I set off for Carlisle, visiting some football grounds and then into Carlisle town centre for a look around. We got to the ground about 1PM and were lucky to get some free tickets that were left behind from the player's allocation. I then went to the club bar for a pint, before getting a couple of Scotch Pies from a local shop. 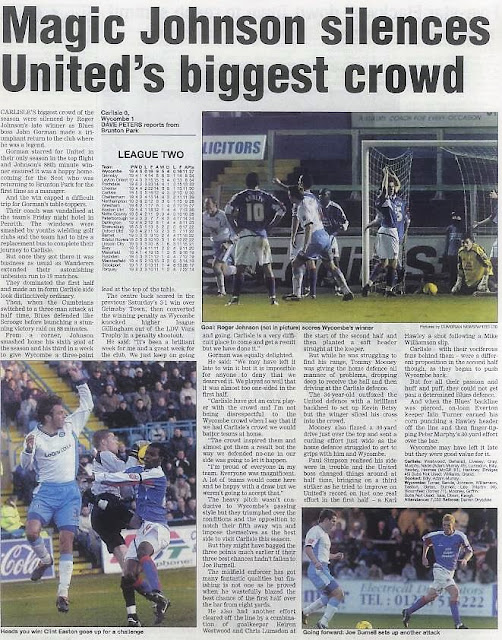 The game itself will not live long in the memory. It was a tense top of the table clash between 2 teams slugging it out for promotion. Wycombe showed their steel by absorbing lots of pressure coming from the home side, before going up the other end and getting an 87th-minute goal from Roger Johnson. This continued our unbeaten run to the start of the season, which we would go on to hold until the Saturday before Christmas under manager John Gorman. My only other visit came in 2009, this time Wycombe were battling against relegation and slipped to a 1-0 defeat in another dull game.

On the day of the game I woke around 8 am. After catching up online over breakfast, I had a shower, packed my bag and left just after 9.30. At 11, I stopped at Hopwood Park services for a comfort break and was disappointed to learn that I'd have to rely on my phone for pictures - Carlisle's helpful supporters liaison officer replied to my email to say that the media team had banned cameras inside the ground. All a bit overzealous in my opinion, but you can't fault the club for their quick reply. The stop added a bit of time to my journey, especially with a diversion and delays due to traffic. I stopped again at Lymm for lunch around 1. I'm not usually a fan of McDonald's, but with them doing their normal prices at a service station, I was quite impressed. I had a chicken, bacon and cheese burger along with fries for little over £2.50 and although it won't win any awards, it was decent enough. I still had a fair way to go though, with some of the journey through the scenic Lake District, spoiled a bit by drizzle. Luckily, it was dry by the time I reached my guest house at 3.20, the Corner House Hotel. I checked in, put the parking permit in my car and went up to my room for 45 minutes to relax. I then popped to the shops across the road, buying amongst other things, an emergency phone charger for a quid from Poundland. This would be useful, as I’d forgotten my normal one and am forever on my phone, so the battery often runs out. 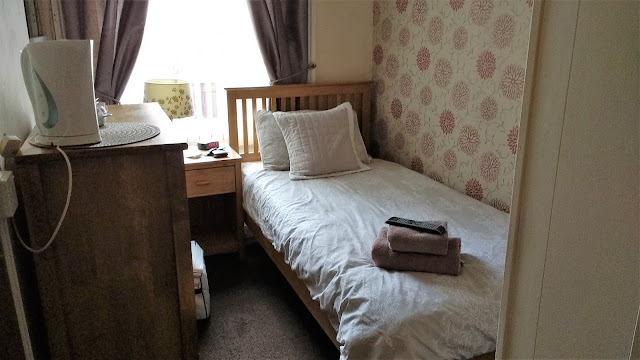 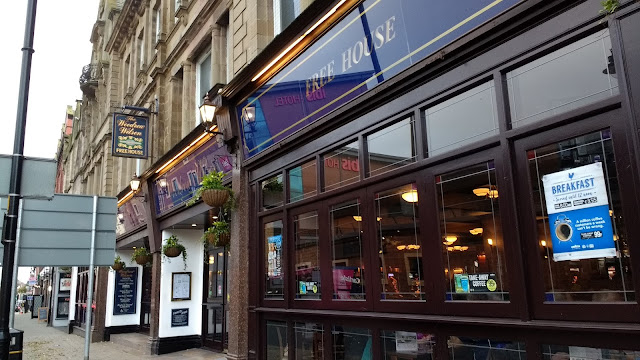 After going back to my room for a bit, I left for the local Wetherspoons at 4.50. It took a while to find a cash machine that wasn't broken or that didn't charge and I left the first Wetherspoons for the moment due to a disappointing range of cider. The second, the Woodrow Wilson was a lot better, having one of my favourite ciders, Black Dragon, in stock. This was made all the more pleasurable by the fact that it was only £2.45 a pint with my CAMRA voucher. With a few pints down me, I was feeling good. A stop at a chippy for Haggis and Chips didn't dampen my enthusiasm and by 7, I was at the ground. Ticket bought for the high price of £22 I was made welcome by the stewards and had a decent seat. The first half was frustrating, Carlisle breezing into a 2-0 lead without much resistance and Wycombe lucky to grab a goal back from a great Sam Saunders free kick. Again, I was cursing the satan of the Football League, Shaun Harvey for sending us on a ludicrous Tuesday night trip. What was done was done though and despite Mr Bean style incompetence from the Football League we had a second half to fight for. The 126 Wycombe fans, a decent number for the distance on a Tuesday night, were sent into raptures when Adebayo Akinfenwa equalized on 74 minutes with a trademark header, but ten minutes later, Carlisle were back ahead thanks to Reggie Lambe. There then followed five minutes injury time, where the hosts attempted to run the clock down. In the dying seconds Wycombe won a corner and Cowan-Hall headed home for Wycombe, much to the delight of the traveling fans. I then went into town with Paul and some other mates, where a couple more pints (or so) were had before I got a parmo and headed back to my room. After a considerable amount to drink, I was out like a light and had a decent night's sleep. 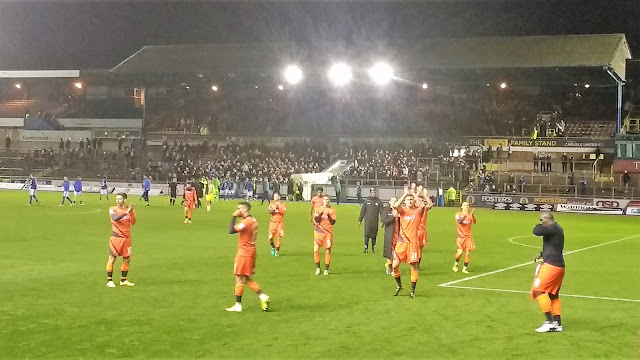 BRUNTON PARK is a classic football ground and one well worth a visit if you are a groundhopper. The East Stand is the newest in the ground, having been built in the mid-1990's. Unusually, it overlaps some of the pitch on one side and falls short on the other - a sign of an abandoned revamp of the whole ground. Away fans are usually located here unless they bring a huge following and views from here are good. If there is a big following then the Peterill End is used. This is a small, open terrace which has seen a small number added in recent years. Opposite is the main stand, this has seats at the back and terraces at the front. Finally, the Warwick Road End is probably the nicest end, a cavernous terrace with an interesting triangular shaped roof.

Food and drink at the ground are pretty standard. Though I've not been there, the Beehive is a recommended pub near the ground and there are a few others. The town is around a mile away and this includes a couple of Wetherspoons. No doubt I'll be visiting some of these in the entry of my latest visit, which inspired me to update this blog. 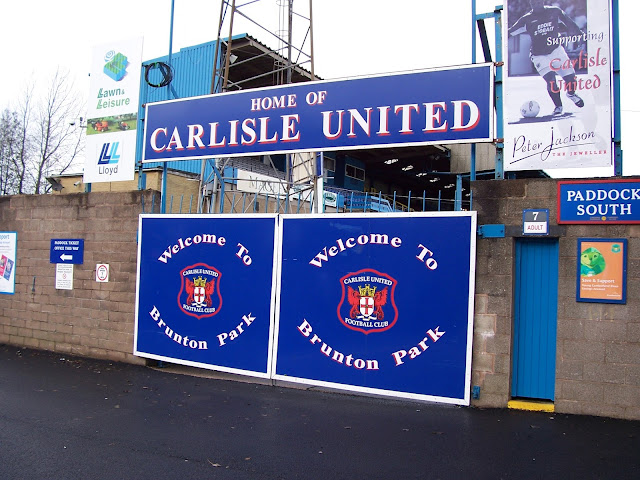 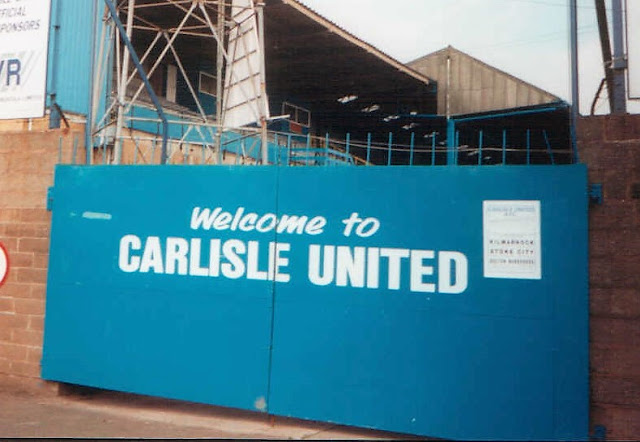 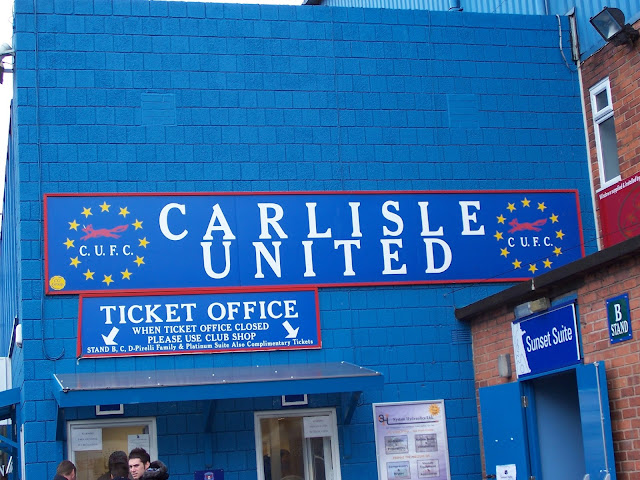 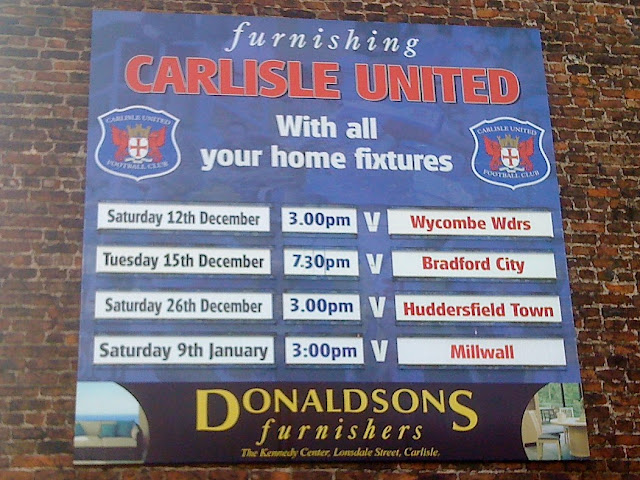 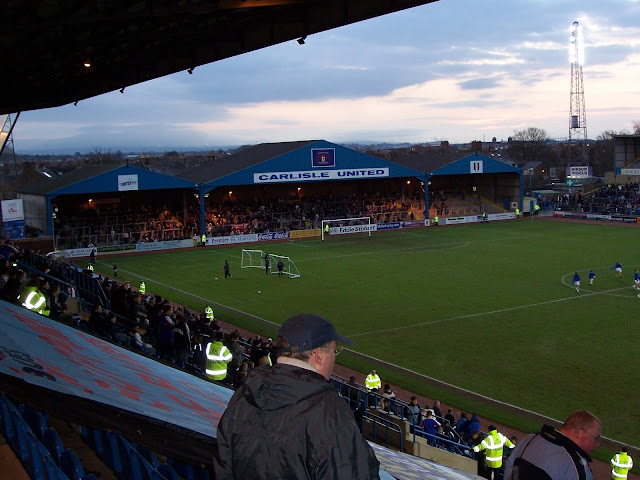 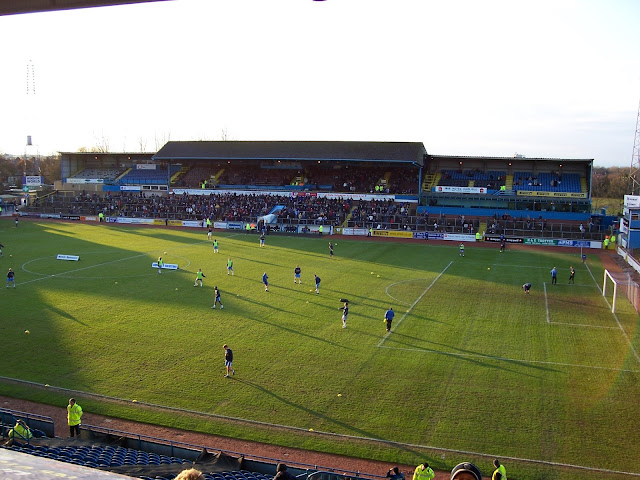 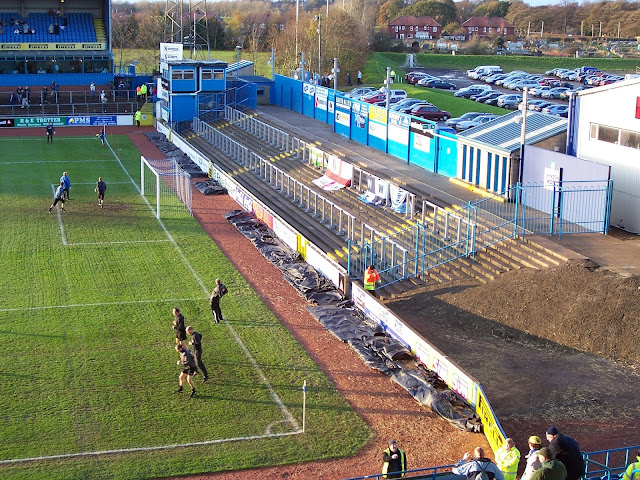 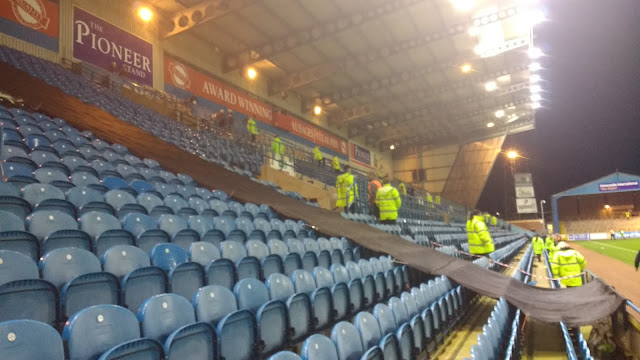 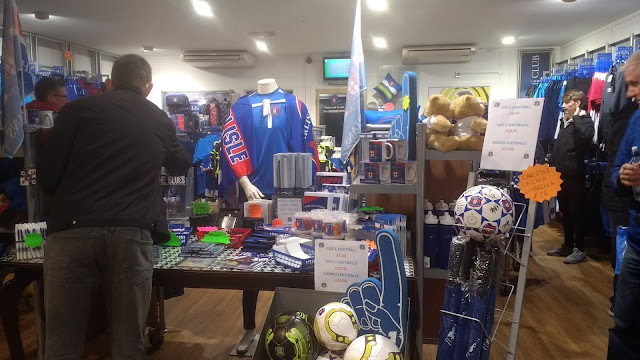 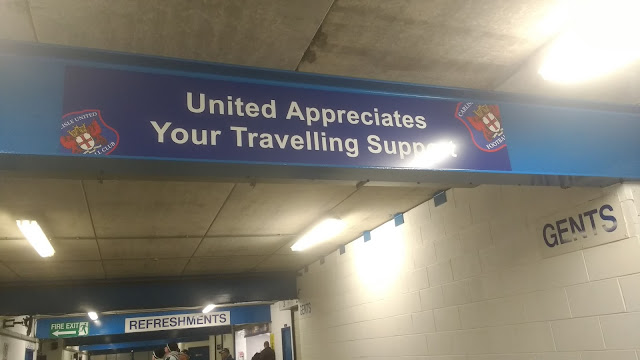 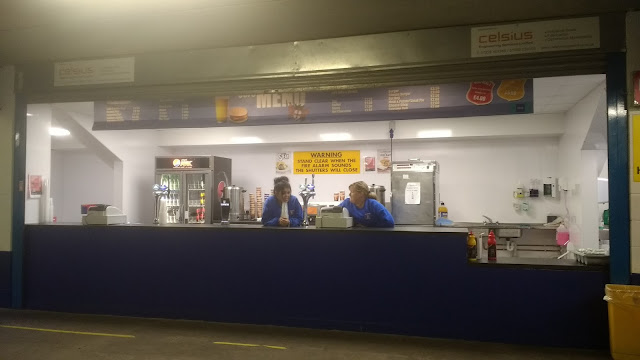