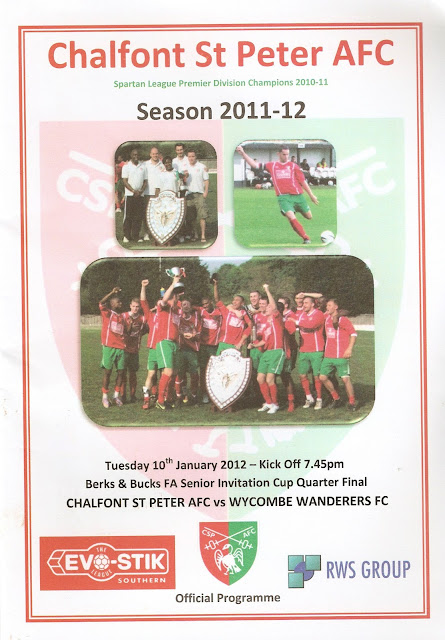 The club was formed in 1926 and spent much of their early years in local football. In 1963 they joined the Spartan League, enjoying their best ever finish of 6th in their debut season. In 1976, Chalfont joined the Athenian League with their best ever finish coming in 1984 when they finished as runners-up to Redhill. The following season they joined the Isthmian League, initially at Division 2 level. After winning the league in 1988 they progressed to Division 1 with their best ever league finishes of 11th coming in 1990 and 1991. This, was, at the time, step 3 of the non-league pyramid. Fortunes soon declined however and they were relegated to Division 2 in 1994 and then Division 3 at the turn of the century. Finishing bottom of Divison 3 (step 5) in 2001 represented one of the club's worst ever seasons. There was a lot of league reorganisation around this period and in 2006 Chalfont joined the Spartan South Midlands League. This galvanised the club and results soon picked up. After several near misses, they won the league in 2011, gaining promotion to the Southern D1 Central where they remain to this day. Generally, it's been lower-half finishes, but they did finish 6th in 2016, just missing out on the playoffs.

Chalfont St Peter's best run in the FA Cup has been to the third round. They've achieved this on several occasions, losing out to Braintree Town (after a replay) in 1985, Basingstoke Town in 1998, Bishops Stortford (after a replay in 2012 and Evesham United in 2014. The 3rd Qualifying Round has also been the club's best ever progress in the FA Trophy with the club losing to Ashford Town in 1989. There have also been a number of FA Vase runs, not least in 2009 when they were one game away from Wembley. Totton & Eling, Clanfield, Selsey, Dunston Federation and Christchurch were beaten on the way to a Semi-Final clash with Glossop North End. After a 3-3 draw in the home leg, they drew 2-2 up at Glossop. The game went all the way to penalties with the current NPL side triumphing 6-5 on penalties.

Locally, Chalfont St Peter has won the SSML Challenge Trophy twice, the Berks & Bucks Intermediate Trophy twice, the Berks & Bucks Benelovant Cup in 1965 and the Wycombe Senior Cup in 2007. The record attendance of 2,550 came in 1985 for a friendly game against Watford. Their biggest ever win came in 2008 as they beat Kentish Town 10-1 in a SSML Premier game whilst the record defeat was eight years earlier as they crashed 13-0 to Lewes in an Isthmian Division 3 game.

My first visit to Chalfont St Peter's Mill Meadow was in the October of 2003 when Wycombe's youth team traveled to play Chalfont St Peter's youngsters in the 1st Round of the FA Youth Cup. The winners would play Swindon Town and it was the Chairboys who won 3-0 to progress. None of the youth team progressed to the first team from that season, with the exception of Andy Reilly, who played a few games at left back. For the record, the goalscorers that night were Mark Boland, Leon Gordon and Matt Heggie. 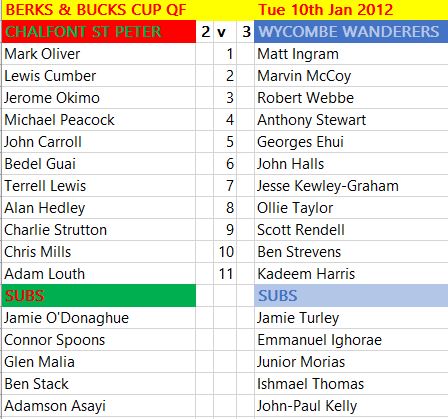 My more recent and more memorable visit came in January 2012, when a Wycombe reserve team went to play a Berks and Bucks Cup game down at Chalfont. The previous first team fixture had seen an awful 6-0 defeat at home to Huddersfield. To make things worse, the game was shown live on Sky, for the whole nation to see our half-arsed efforts. After that sort of performance, the whole "first team" or at least those that had performed badly should have played for the reserves. This turned out not to be the case although several players that had been in the first team this season played - namely Marvin McCoy, John Halls, Scott Rendell, Ben Strevens and Kadeem Harris. Few of them made any lasting impression to suggest that they should be in the first team.

I had a bit of a nightmare getting to the ground, thanks to me relying on Google Maps. Firstly I set it to direct me to Chalfont St Peter FC and I ended up in the middle of nowhere, up some deserted country road. Secondly, I chose the name of the road that the ground was in - Gravel Hill. Again it sent me to the wrong place, albeit nearer the ground. Finally, after entering the postcode, I got to the ground, though it was still hard to find the entrance in the dark. I actually got there dead on kick-off, but then my nightmare continued - there was nowhere to park! Eventually, after 10 minutes of driving around, I found somewhere and after a short walk got into the ground 15 minutes into the game. At least the scoreline was good news, Wycombe led 1-0 through youth teamer Ollie Taylor's goal. And Wycombe were 2-0 to the good before halftime, Scott Rendell cooly slotting home from just inside the area.

So with Wycombe looking comfortable but not really excelling, it was set to be a second half where maybe the players would step up a gear and add a couple more goals to show why they should be pushing for a first-team place. But goals from Adam Louth and Charlie Strutton made it 2-2 as Chalfont had much the better of the second half and really should have had a winner. This meant extra time, not brilliant as I had to be up at 4am the next morning for work. But my mood was improved when youngster Junior Morias drove home after going past a couple of Chalfont defenders to give Wycombe the win, despite Chalfont making a late push for a winner by sending their keeper up for corners towards the end of the game. So Wycombe progress to the Semi Final, and according to Wikipedia face the winners of the Chesham v Slough game, that would be played in a weeks time.

I'd discovered I'd be on my own on this Tuesday as both my groundhopping pals were busy doing other things. I, therefore, wanted to keep it local so it would have to be a revisit. After thinking about it for a bit, I whittled it down to two options - either Chalfont St Peter v Windsor in the Berks & Bucks Cup or Staines Town v Dulwich Hamlet in the Isthmian League Cup. As they were both minor cups, I thought that the prices might drop for entry. However, with neither team announcing any cuts, I decided to go with the nearest option at Chalfont St Peter, being as it was only 10 miles and 20 minutes from home. I also needed some decent pictures of the ground, as the ones taken previously were not the best quality. 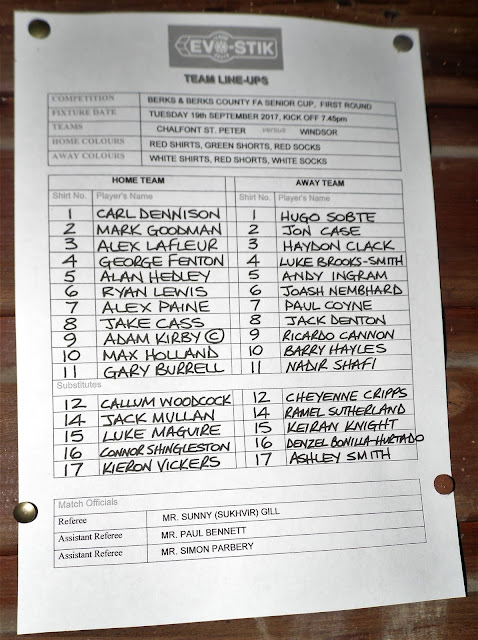 On the day of the game, I woke up after a good night's sleep and after getting dressed did my usual walk down town on my day off. After my Dad gave me a lift home I was glad to sell my digital camera that I broke at Wembley a fortnight ago on eBay. Once all fees had been taken into account, I got £70, half of the money I paid for it 17 months ago, therefore making the best of a bad situation. After walking to the post office to post it, I came home and started updating my blog for tonight's game. I also started planning my trip to Bilborough Town with fellow hopper Chris on Friday.  After having some dinner, I got my stuff together and left home at 7. I listened to TalkSPORT on the way as they were previewing the night's League Cup games and got to the ground at 7.25. Entry was one of the more expensive at step 4, costing £9, but by no means the worst offender. At least I had my updated pictures of the ground including the sign outside which I spotted on my way in. 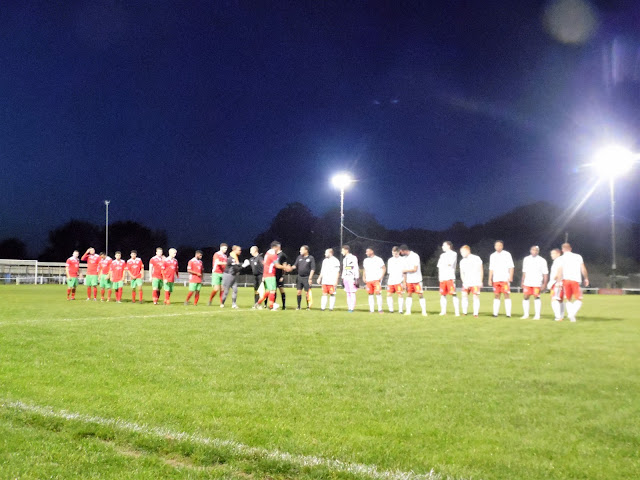 One notable player for Windsor was the 45-year-old Barry Hayles with the former football league player starting for the visitors on the night. I took my place on the far side near the halfway line on what was becoming a chilly evening. Both sides had chances early on but it was visitors Windsor who were having the better efforts and they'd already forced a couple of good saves out of Chalfont keeper Carl Dennison before they took the lead on 18 minutes. A ball was lofted forward into the area and Nadir Shafi finished from close range to give Windsor the lead. The game was end to end, but there wasn't too much quality in the final third, that said both keepers were called upon in the opening half. The second half saw things improve and the game saw some goals. On 53 minutes Chalfont got the equalizer when a cross from the left was headed home by Gary Burrell. Their joy was short-lived, however, as a couple of minutes later the visitors were back ahead. It was a rising shot from Haydn Clack that put them ahead and this prompted another good spell for them. They looked to have sealed the game on 68 minutes when a penalty was awarded for a foul in the area. Barry Hayles who played the full 90 minutes and had a good game stepped up to take the penalty which found its way in off the left-hand post.  The hosts wouldn't lie down however and they reduced the arrears on 78 minutes when Alan Kirby headed home a floating cross. Despite coming close, including a shot cleared off the line, they couldn't force an equalizer and penalties. I left at 9.40 and was back home by 10, going home shortly after.

MILL MEADOW is fairly average ground for this level, but it does have some nice touches. There are 3 areas of cover - firstly along the side is an old-looking wooden main stand. This has seen some refurbishment in between my visits and has a capacity of 220. Behind the goal to the left is a home-built looking stand. This features a small area of terracing flanked by around 80 blue seats, which looking at them, must have been recycled from another venue. Behind the other goal is a newer seated stand with around 100 capacity. The rest of the ground is open. There's also a bar which doubles as a community facility and a tea bar although I didn't buy anything from either.The town is a short walk away, but I've never visited it.

1: Ground facilities & condition (for the level)
Fairly standard ground with some nice touches (7)

2: Area around the ground (parking, food/drink, public transport)
Enough parking for most games, a short walk away from town (7)

3: Welcome / Club Friendliness
A nice atmosphere around the club (7)

6: Programme
The 2012 effort was a good solid effort, well presented and with relevant info (7)

9: Bar / Clubhouse
Not the best range of drinks and looked like a creche. More of a community facility than a bar (3) 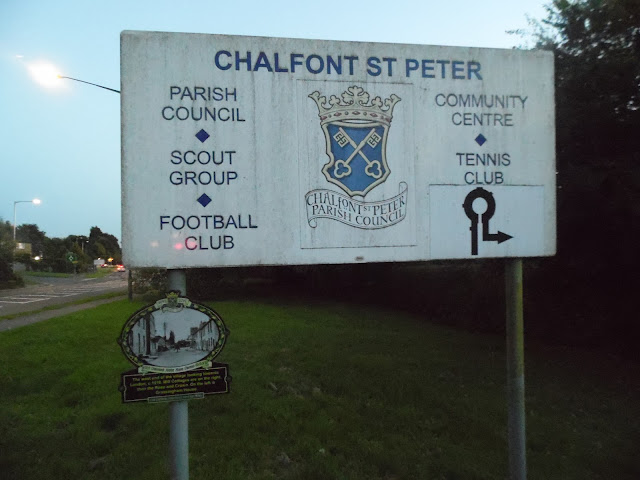 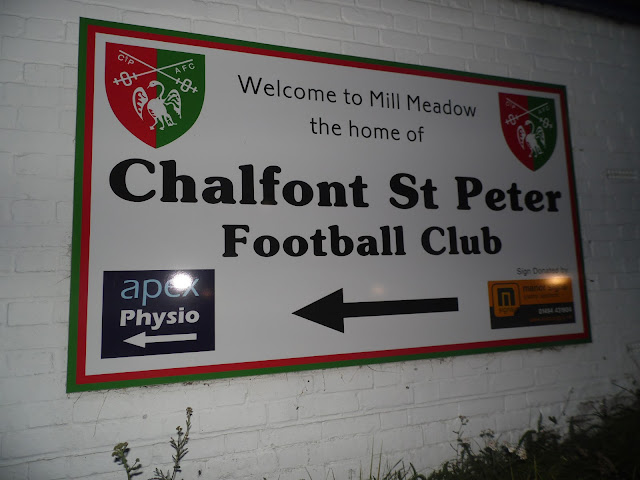 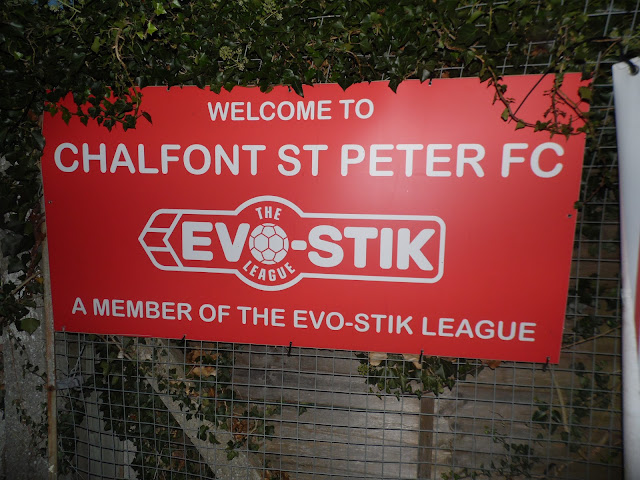 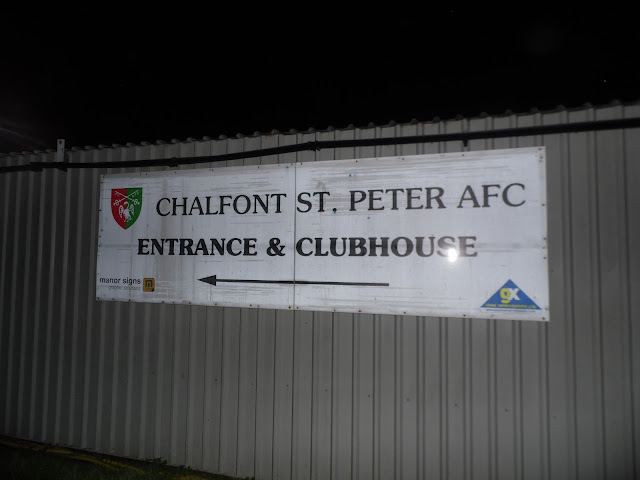 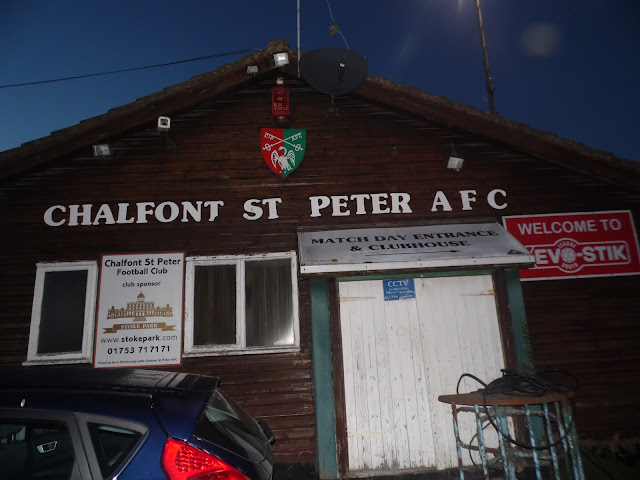 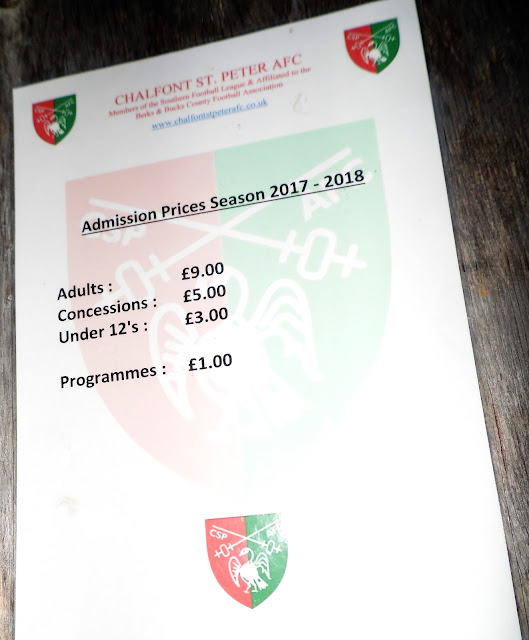 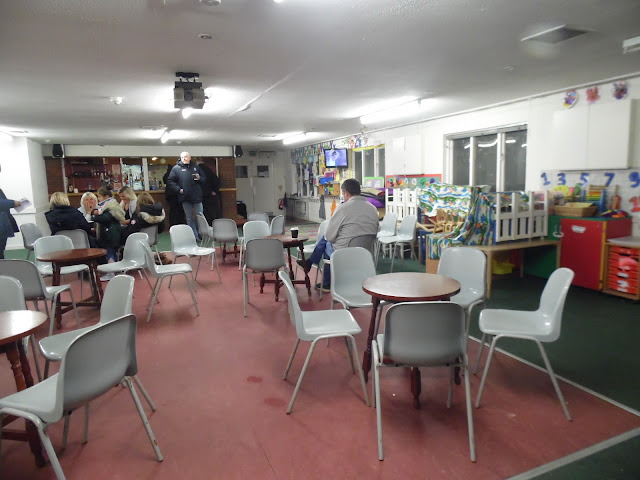 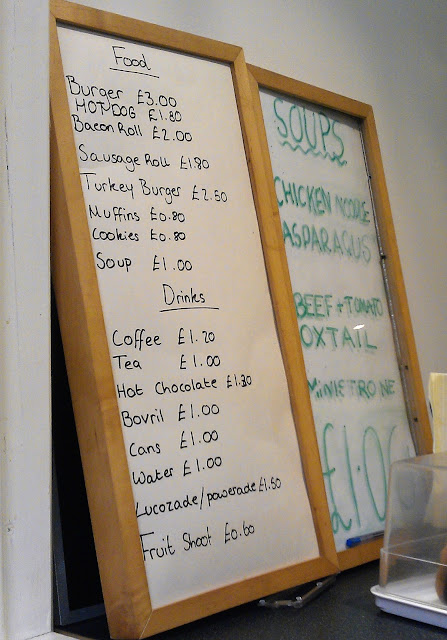 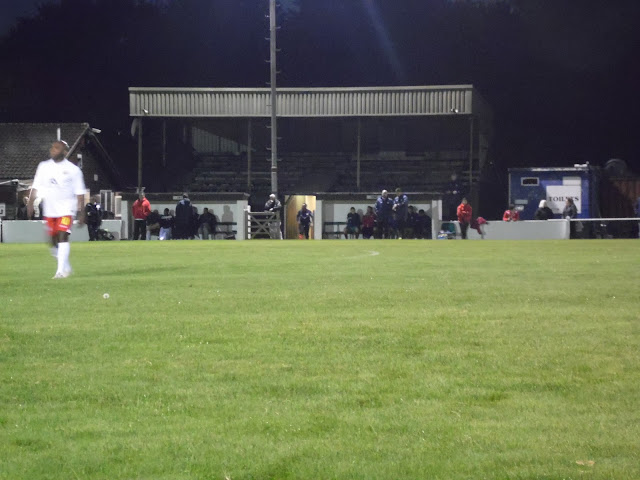 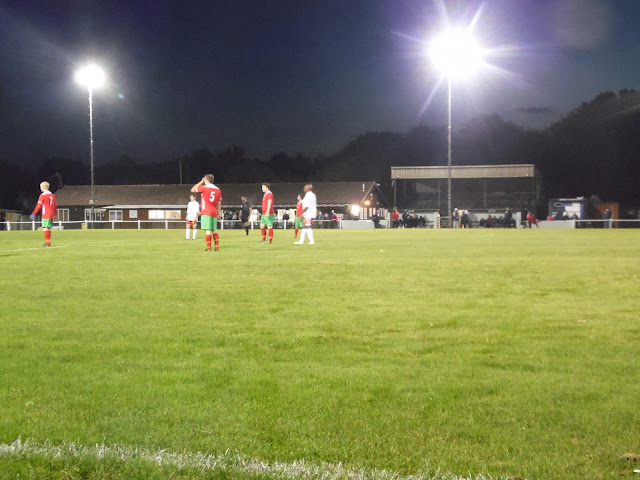 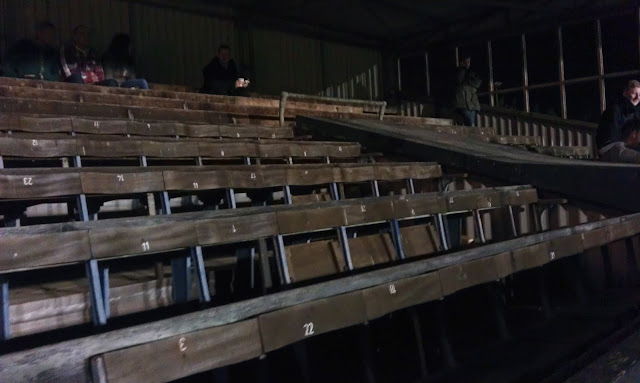 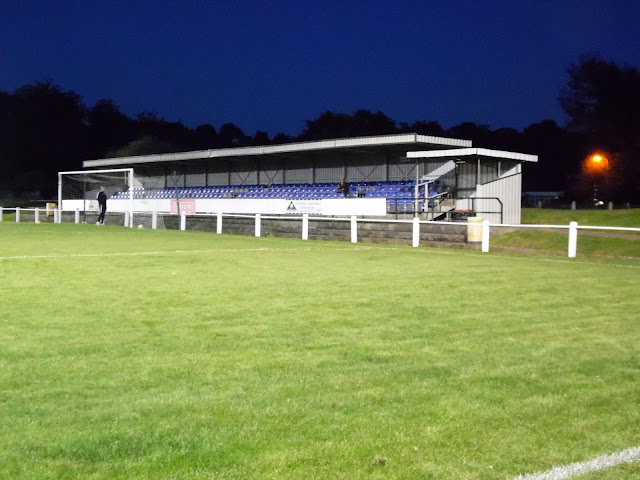 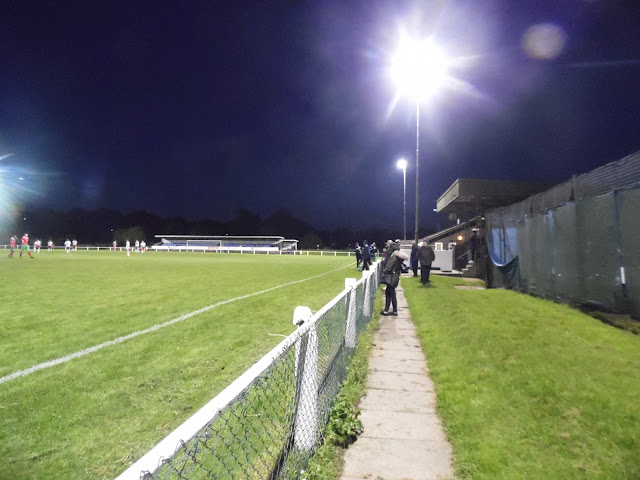 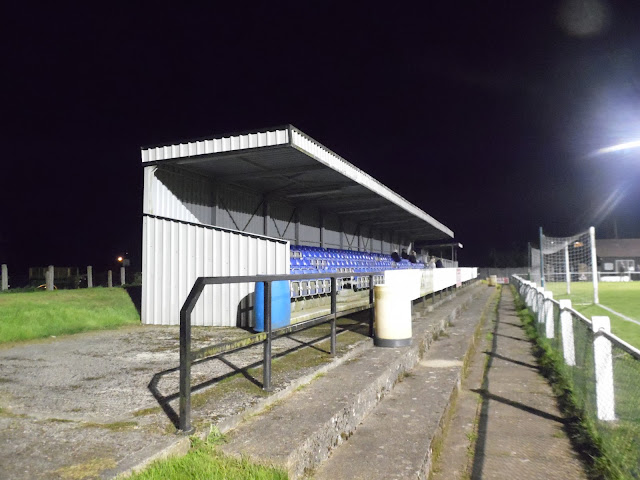 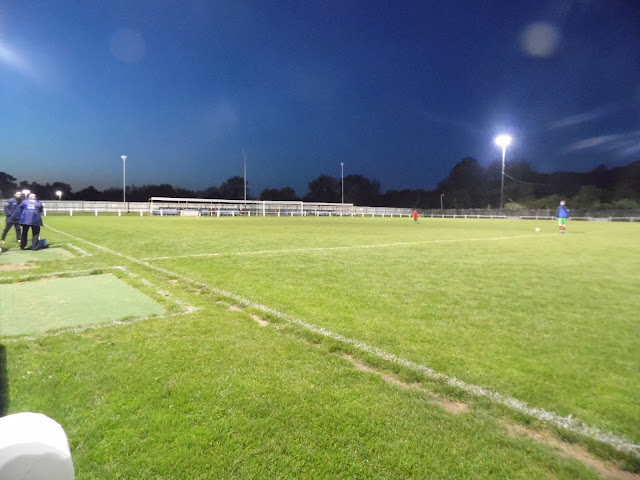 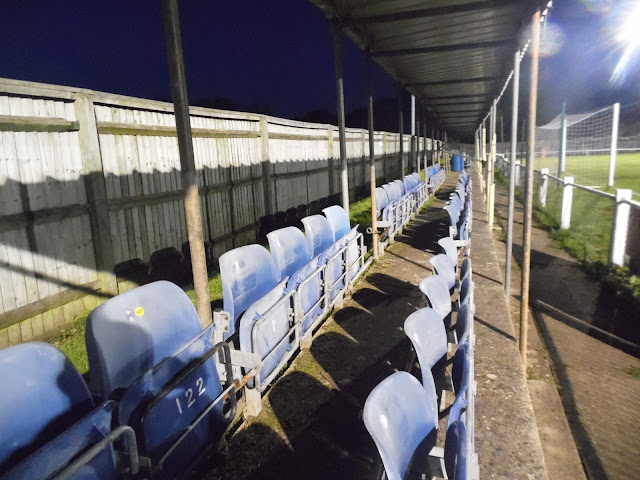 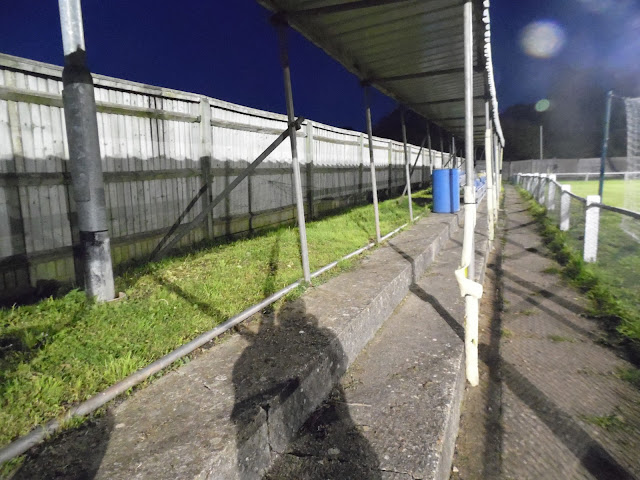 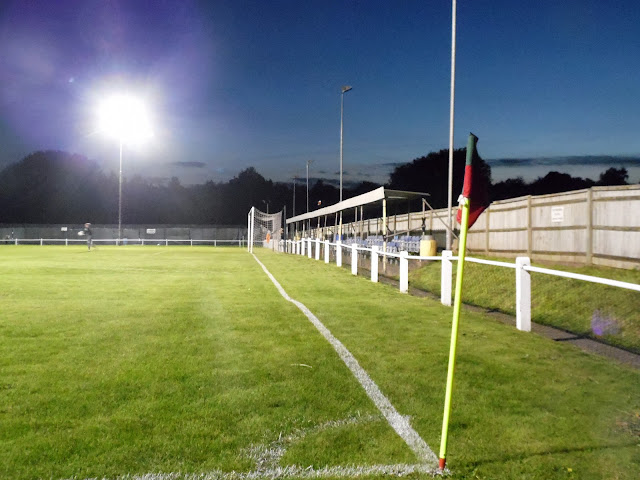