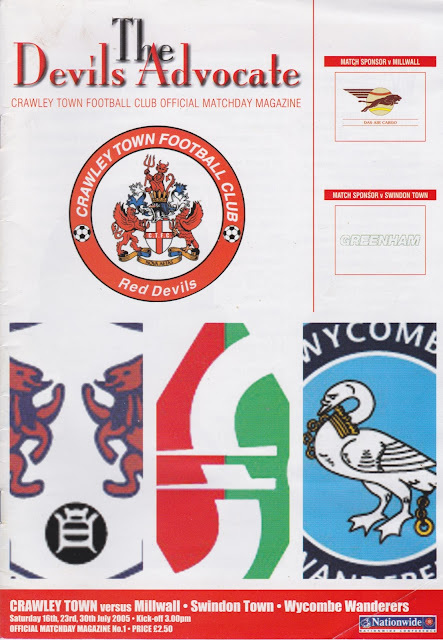 Crawley Town FC was formed in 1896. They spent most of their history in the Southern League, that was until 2003/04 when they won promotion to the Conference. After a series of mid-table finishes, they won promotion to the Football League in 2011, obtaining a record points haul in the process. In their first season in the league, they finished 3rd in League 2 and that was enough to win promotion under the controversial Steve Evans. A record finish in 2013 of 10th in League 1 was part of the reason why Evans got the job managing Rotherham United in the Championship. And Crawley's loss was part of the reason why they finished 22nd last season, returning to League 2 and thus playing Wycombe for the first time in a competitive league game.

The ebullient Scotsman was also part of Crawley's best ever FA Cup run in 2011/12 and 2012/13 when they reached the 5th round 2 seasons in a row. The most famous was the former when they beat Derby in the 3rd Round. Former Wycombe man Sergio Torres ran the show, live on TV. The end of the match was memorable for Steve Evans hopping around like a madman during injury time, waiting for the game to end. The 2-1 win set up a game with Torquay which they won and found themselves with a 5th Round tie at Old Trafford. Manchester United won 1-0 but it was a solid performance from Crawley, winning the nation's acclaim in the process. 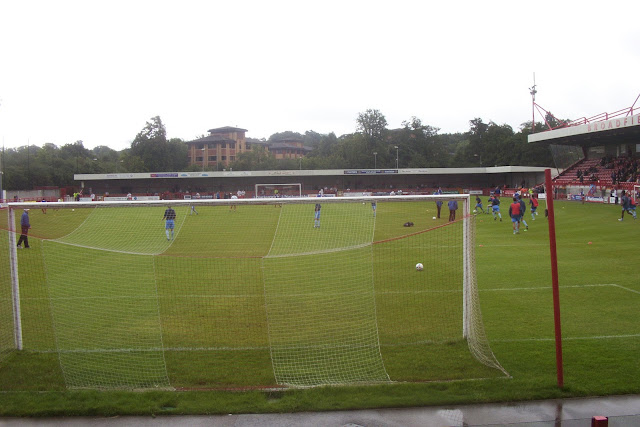 My first visit to Crawley Town's Broadfield stadium came in the preseason before the 2005/06 season. It was a first-team Squad that made it's way to West Sussex to take on the non-league side. In a dull first half, Crawley, captained by former Wycombe youth player Ian Simpemba took the lead from Allan Tait. Wycombe came roaring back in the second half, however, and goals from Tommy Mooney and Nathan Tyson gave Wycombe victory and capped off a productive outing. There was one sad incident of note - I dropped my digital camera down the steps of the terrace, meaning it got damaged and was unable to save pictures to the SD Memory Card! I'd originally got that camera in January 2002 after a cock-up on the Kodak Website. They were supposed to be selling for £329 but a mistake meant that they went up for £100. After much legal intervention by a group of our consumers, we got our deal. I wish I'd had a digital camera from the start of my football adventures but in any case, I was a fairly early adopter, meaning I got some pictures of some the grounds that are now defunct. 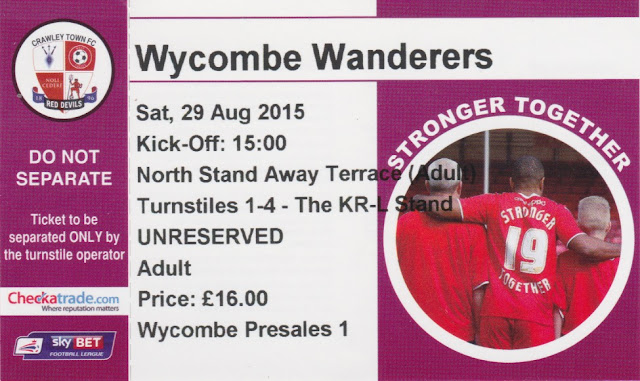 I had plenty of choices of places to go on this day. Firstly there was the Welsh Groundhop which would have seen me attending 5 games over Friday and Saturday. I could have gone to a fair few nice places but I decided against this as it was right up in Anglesey in the far North West corner of Wales and it would have cost a fortune in fuel and accommodation. Then there was the FA Cup Preliminary Round, with several attractive ties from which I would probably have plumped for Bexhill United v Faversham Town. But in the end, I decided to watch my own team Wycombe, who were playing at Crawley. I had some money left over from my birthday presents fund after the Wycombe club shop failed to get my original presents in stock. So I asked for the day out to Crawley instead, to which my parents agreed to. This was good news as it would help out with costs, after an expensive week or so.


On the day of the game, I woke around 6am and couldn't get back to sleep. I killed time until 10 when I and my parents got the coach from the end of our road. My brother joined us later on, so for the first time in ages, the whole family was going to a game together. We went to the Lambs Inn in Lambs Green which was pretty near the ground. To be honest I got fairly intoxicated and don't remember much else. It was a dull 0-0 draw, well at least that was the case for the second half where I was awake. It may have been edge of your seat stuff in the first half but I was asleep and from what I hear it was the correct decision to have forty winks. Nonetheless, it has been a decent day with the family. Crawley fans were a good bunch and the stewards minded their own business which was good. I made the trip home, getting back around 7 and watching MOTD before going to sleep. 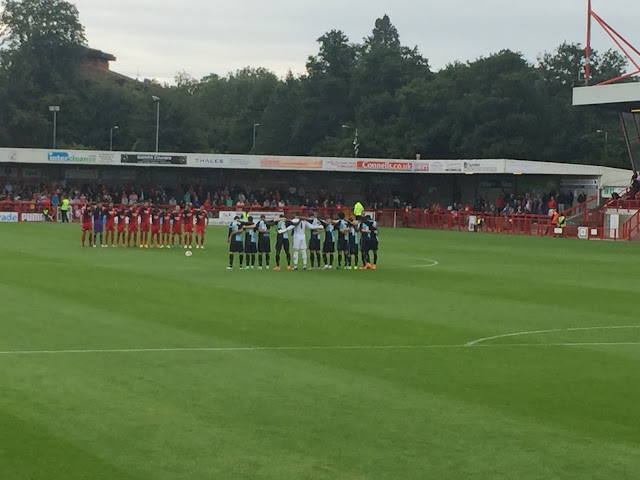 THE BROADFIELD STADIUM is a smart former non league style stadium. 3 sides are
excellent, a covered terrace behind each goal, plus a good sized seated stand that is elevated to offer a good view. The remaining side used to be am open terrace but since entering the league Crawley have put an unattractive but functional seated stand on the 4th side. It's a kit stand rather than a proper concrete one but it provides much needed extra seats. 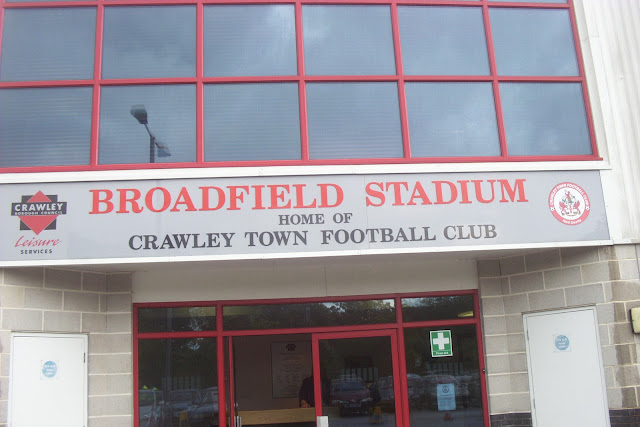 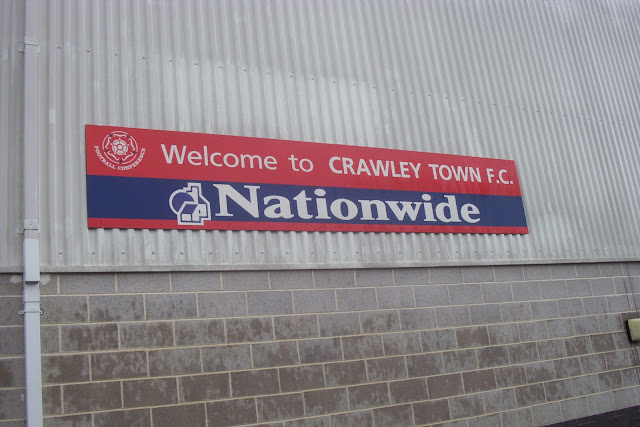 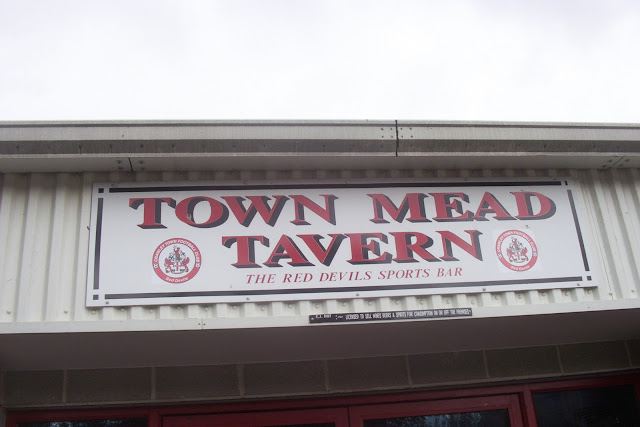 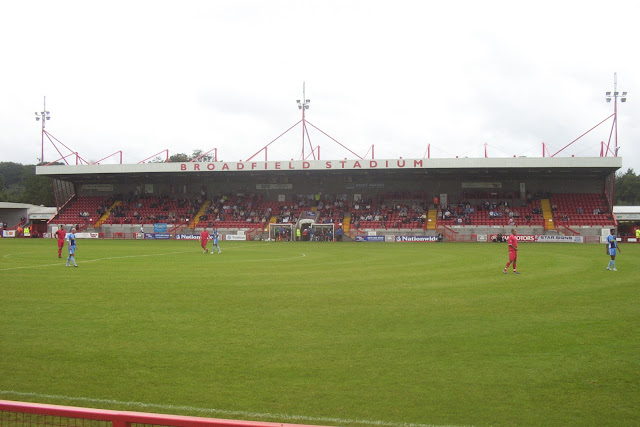 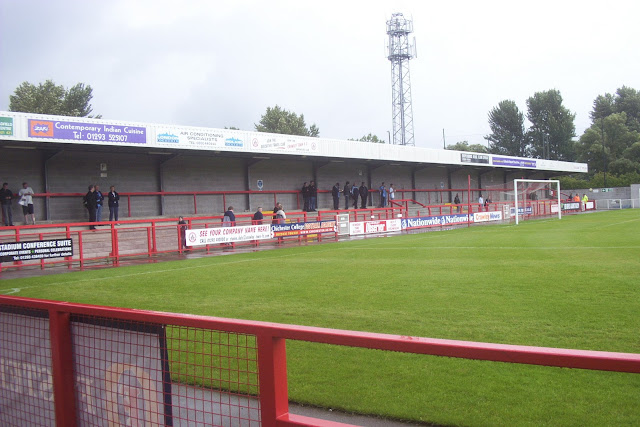 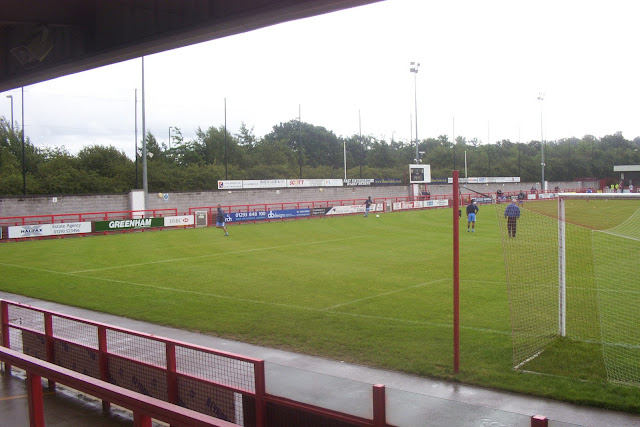 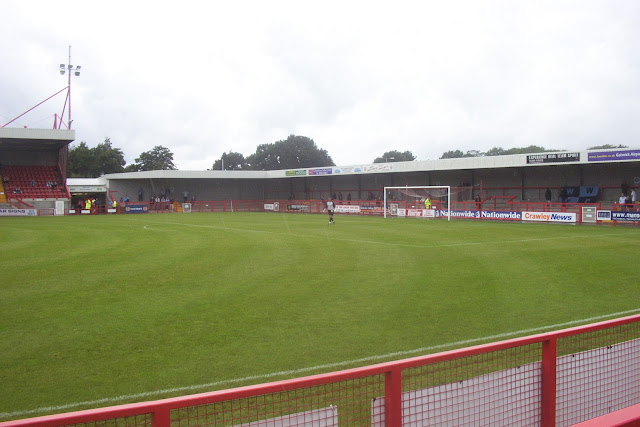 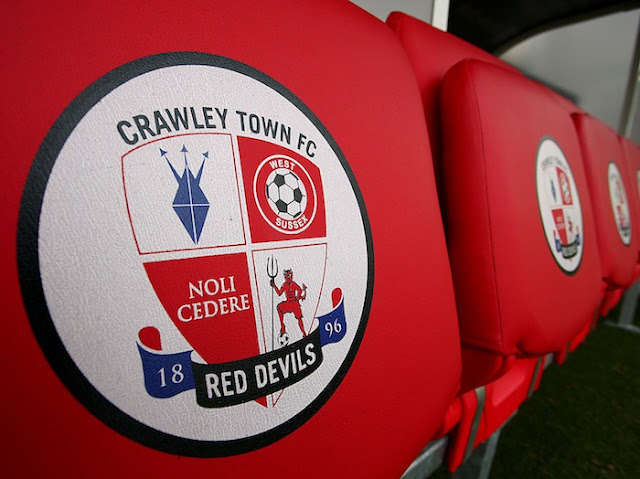 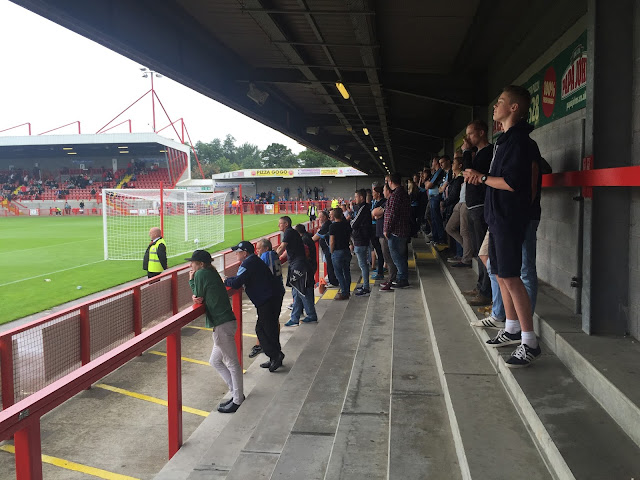 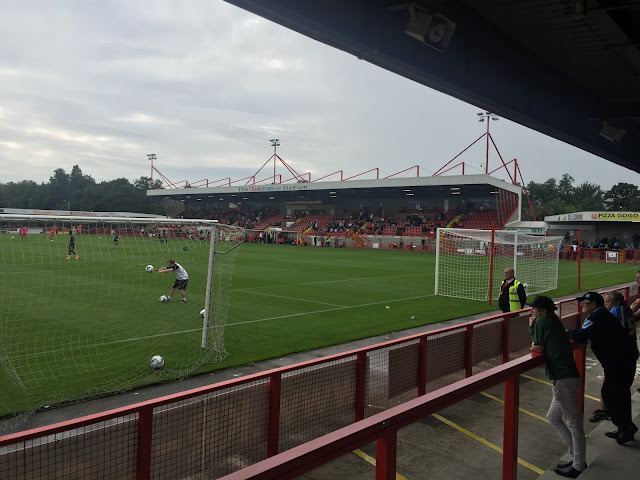 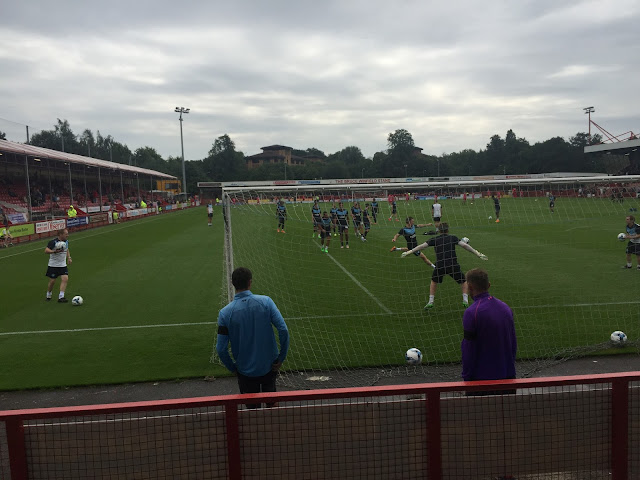 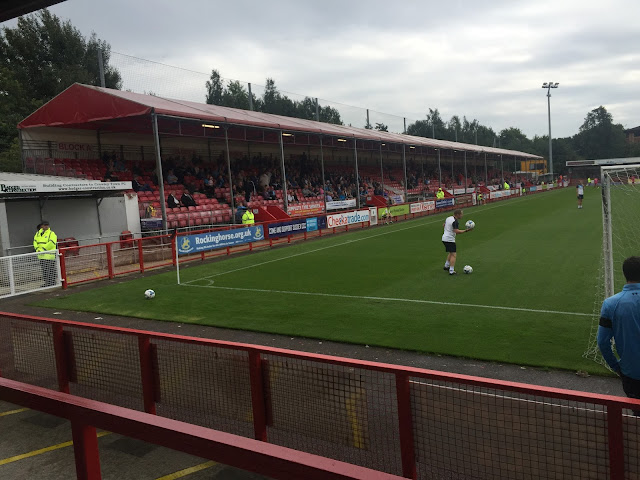