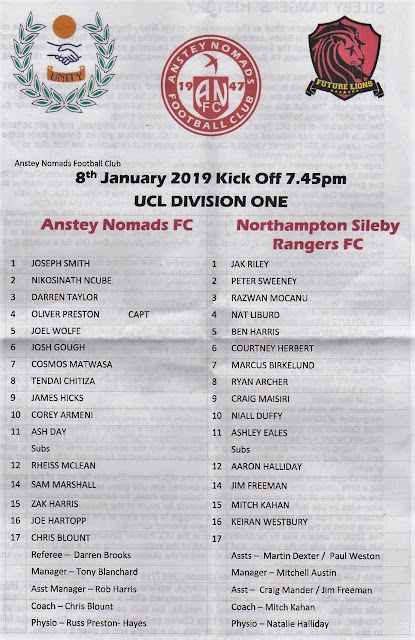 The club was established in 1946 following the end of hostilities in the Second World War. They were the result of a merger between Anstey Methodists and St Mary's and were initially known as Anstey Meths and Mary's which they kept until 1948 before switching to their current name. They joined the Leicestershire Senior League in 1947, starting in Division 1 where finishes ranged from top in 1952 and 1954 to bottom in 1956. They left the league that year before moving to the Central Alliance before progressing to the East Midlands Regional League in 1967. They remained there until 1973 when they rejoined the Leicestershire Senior League. This time, they started in Division 2, winning it at the first attempt and gaining promotion to Division 1. They won this division in 1981 and 1982 with it being renamed the Premier Division soon after. The years between 2002 and 2004 were a tough time for Anstey Naomds with one second-bottom and two bottom-placed finishes but by 2009 they had recovered sufficiently enough to win the league for the 5th time and earn promotion to the step 6 East Midlands Counties League. The first season at the higher was a real struggle - just one win all season and a rock-bottom finish. Results gradually improved and last season they finished as runners-up to Dunkirk only on goal difference, with 24 goals the difference between the two sides as they both finished on 89 points. Changes to the Non-League pyramid saw a transfer to the United Counties League Division 1 where they currently sit 2nd with the chance to go top if they win their games in hand.

Progress had been limited prior to this season in the FA Cup with Ansey Nomads going out at the first hurdle in all three of their previous campaigns. However, they won their first tie this season in the Extra Preliminary Round, beating step 5 Hinckley 4-3 in a home replay after the original game had ended 1-1. Clipstone were next up and it was another notable victory over a side from the step above, with a 2-1 home win. The 1st Qualifying Round saw another home win, this time over fellow United Counties League side Oadby Town. The dream ended with a heavy 7-1 defeat at home to NPL Premier side Mickleover Sports in the 2nd Qualifying Round. Anstey Nomads reached the FA Vase 5th Round in 1996 before a heavy 6-0 defeat at the now-defunct Collier Row. Local cup wins include the Leicestershire Senior League Cup (2009), the Leicestershire & Rutland Senior Cup (1995), the Leicestershire Junior Cup (1995), the Rollestone Charity Cup (2009) and the Battle of Britain Cup (2009 & 2012). The record attendance came during the 1954-55 season when 4,500 saw them play Hayes in the FA Amateur Cup. 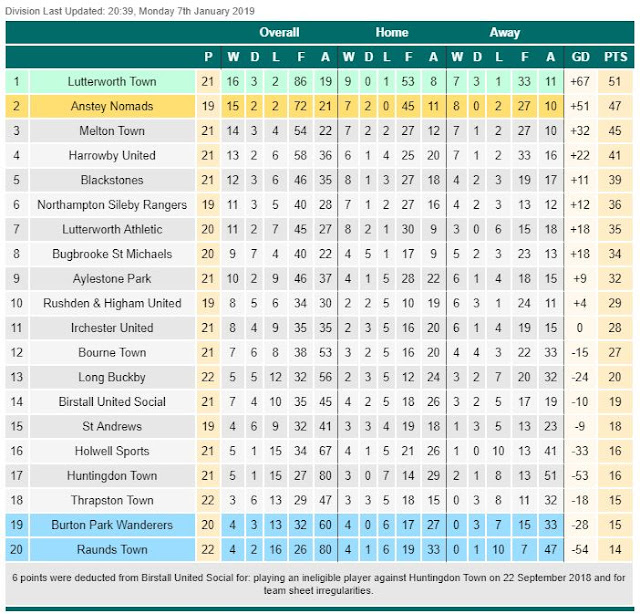 Fellow hopper Chris and I had originally been looking to visit Anstey Nomads just before Christmas. However, torrential rain had wiped out the limited choice of fixtures that we had to choose from that night and so I ended up doing a solo revisit to Edgware Town. He let me know well in advance that he would be free on this Tuesday night though and so with Anstey Nomads again at home and a wide choice of pre-match eating and drinking places near the ground, it was always going to be first choice, with it also being one of the closest we were yet to visit. I did, however, have a list of backups planned in case of an unlikely postponement. For varying factors, it would be my first new ground in nearly a month and so after a mixed bag of revisits, I was looking forward to it. The day of the game came and it was my usual day off work, with me going down town to get a few bits done before coming back in the afternoon to start tonight' blog. I left home at 3.30, meeting Chris around an hour later and we were soon on our way. Our journey started at a slow pace on the M1 with the long-running roadworks still in place. But unusually, the rest of the M1 was a breeze and we only hit traffic (around 10 minutes delay) at the junction to get off for Anstey. The car park at the ground was already pretty full when we arrived at 6 so we parked in a side street just down from the ground. 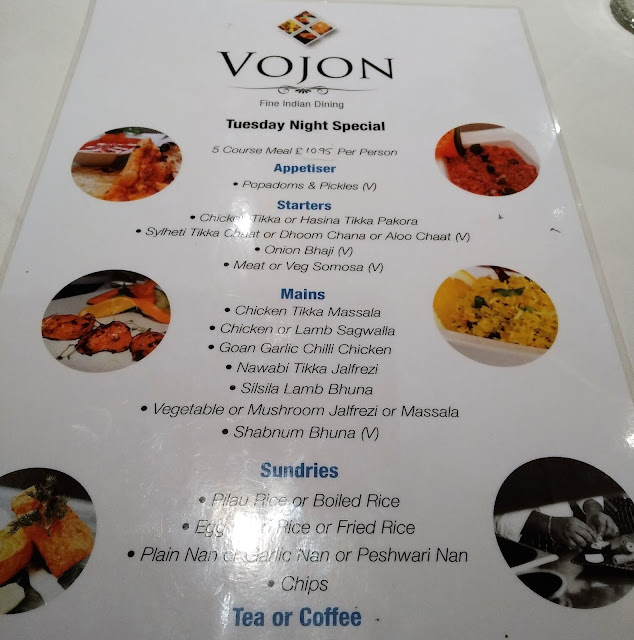 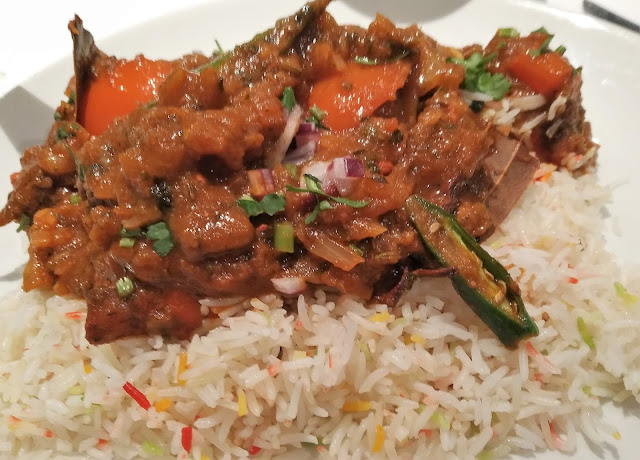 We were both hungry by now where we headed to an Indian restaurant called Vojon where they were doing a '5-course meal' for £10.95. Surprisingly, cheap didn't mean substandard and my Poppadoms, Meat Samosa, Nawaba Tikka Jalfrezi and Pilau Rice were all excellent and as good as I've had in an Indian restaurant. We skipped on the last 'course' of tea or coffee and made our way to a local club called 'Stadon' where they were supposed to do some local cider. This turned out to be true and so we both had halves of Charnwood ' One-Third Pear and 'Cocky Fox' which were both decent. It was also a really nice friendly bar and I met the brewer of the cider who was there having a pint. On the drinks front, I was also pleased to find that I had won a case of Irn Bru thanks to a competition on the 'Nisa' Twitter account. From there, we walked back to the ground which took us around 10 minutes with us getting there at 7.35. I'd have preferred to get there a bit earlier, but we were pushed for time. Admission was £5 which included a free teamsheet with Northampton Sileby Rangers history on the back. There was no actual programme but to be fair, I prefer a teamsheet as its more up to date. 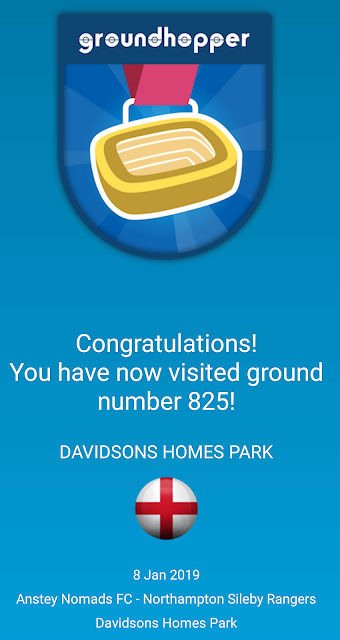 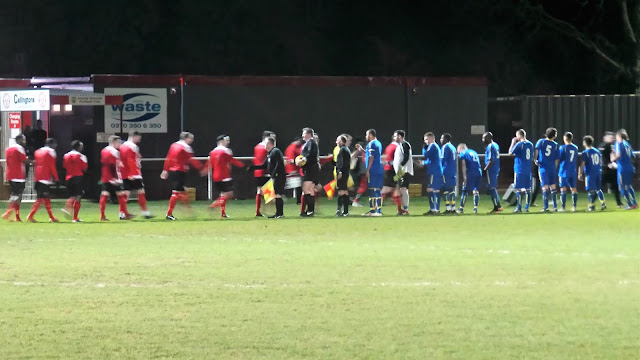 After getting some pictures of the ground, we took our place on the far side on the far side, near the halfway line. It was fairly equal early on, but the visitors were failing to hold the ball up in the final third, something that would become a theme of the evening. After 19 minutes, Anstey Nomads took the lead. It was Ash Day with a good run down the left and then a shot from outside the area. The visiting keeper did get some gloves on it, but it wasn't enough to prevent it from going in the bottom left-hand corner. It was 2-0 after 26 minutes thanks to a quickly taken free-kick and a hesitant Northampton Sileby Rangers defence with James Hicks sliding home. Their keeper Jak Riley was not amused, bellowing 'You don't back off until that c*nt in the black tells you to'. Talking of the man in the middle, despite a few moans from both sides, the portly Darren Brooks had a decent game, not that it was that hard to referee. The third goal on 33 minutes was not too dissimilar to the first, this time it was Corey Armeni running through the Northampton defence and putting a shot past the outstretched fingers of Riley. The second half was more competitive, but the visitors never really threatened to get a goal back, with Anstey sitting back, content with their three-goal lead. We were both peckish by now, so we stopped at a local Chinese with me getting some salt and chilli chips. We left at 10, making good time home, me dropping Chris off at 11. I was back home myself 50 minutes later, but it took me ages to get to sleep, meaning I was knackered when I woke at 4 am the following morning. Our next groundhop was supposed to be on Friday at Barnton, but Chris's employer demanded that he work beyond his normal hours for the next two Fridays, so that put paid to any Friday night football for me, with choices extremely limited.


You can read an alternative view of the game, thanks to the excellent 'Base Of The Pyramid' website, this was a good read and helped me identify the goalscorers which were difficult to identify on the night due to poorly printed numbers on the Anstey shirts. The link is HERE 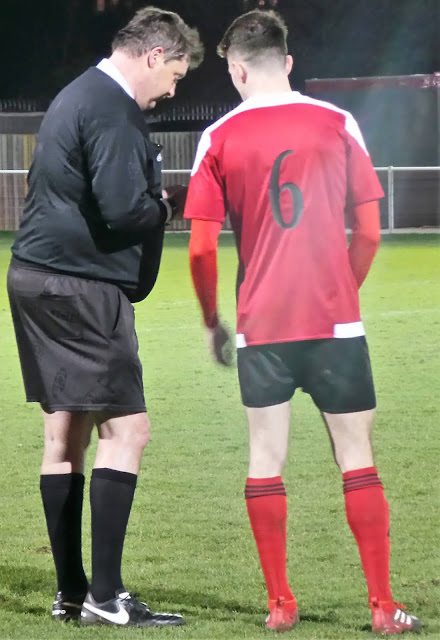 CROPSTON ROAD or DAVIDSON HOMES PARK as it is currently known due to sponsorship is a nice and unique venue. One-third of the ground is closed off to spectators. What remains is mainly open hard standing, but there are two areas of cover. Firstly a seated stand holding around 70, then covered standing around the other side, holding around 150. The total capacity of the ground is 1,000 and it is refreshing to see it free of the modern curse of the metal flat pack stand. I didn't really check out the facilities at the ground but I know that the bar had Guinness, Coors, Worthington, Carling Lager and Carling Cider on draught, as well as bottles in the fridge. The village is 10 minutes walk away, with a large choice of places to eat and drink. I'd highly recommend the Stadon club and the Vojon Indian restaurant. 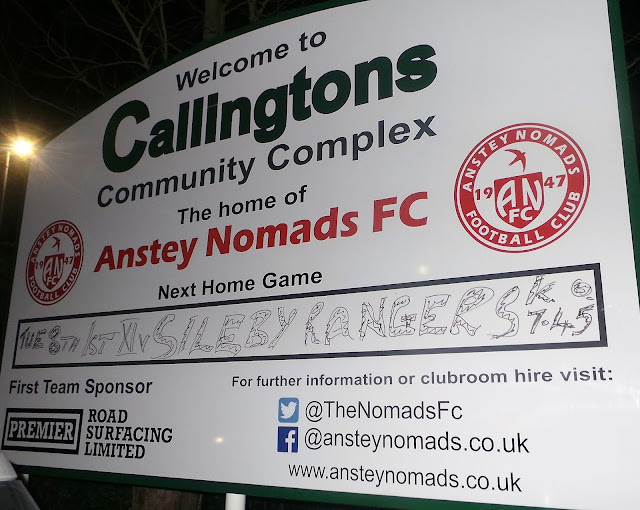 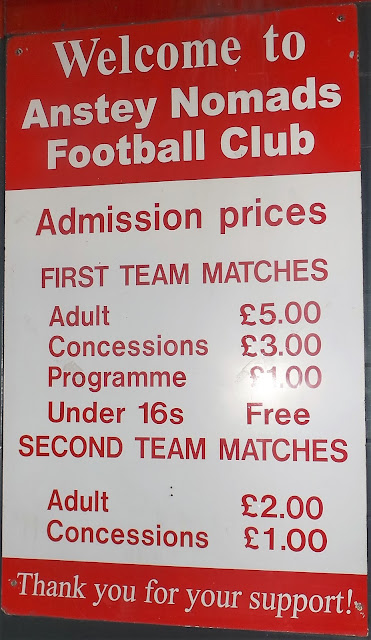 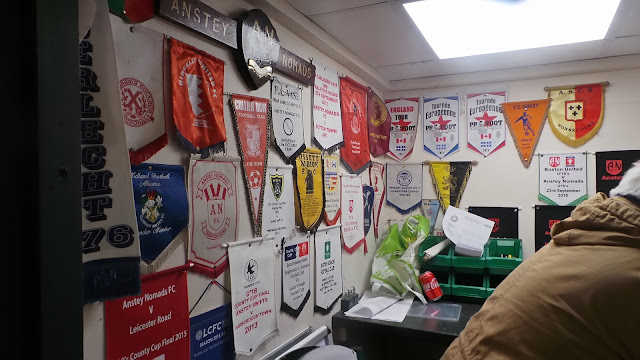 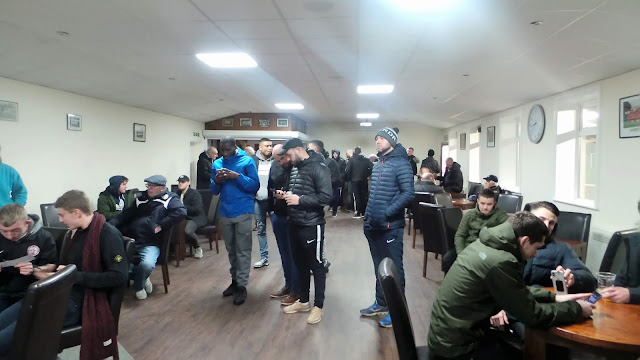 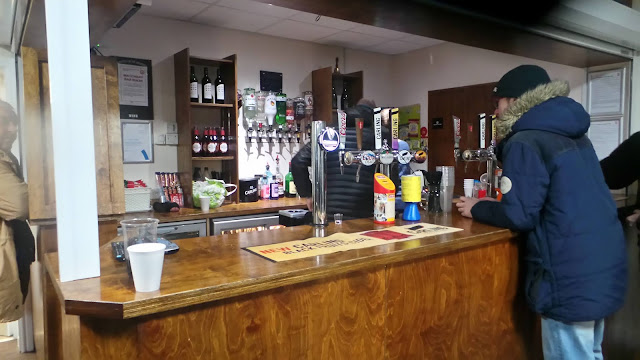 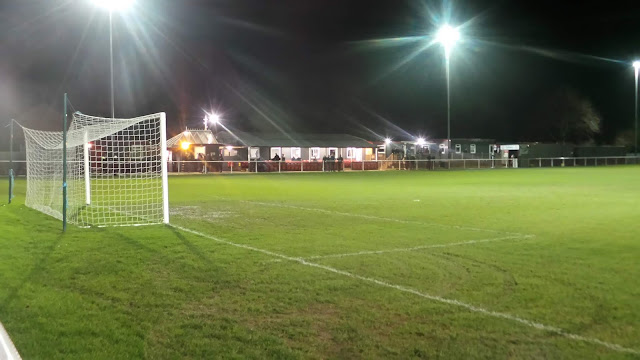 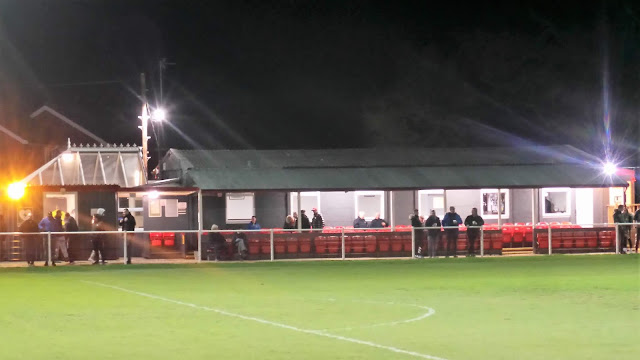 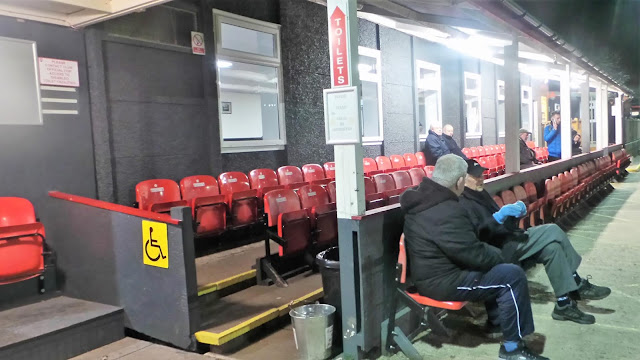 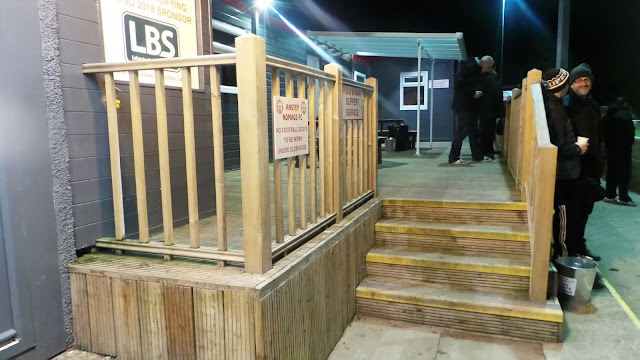 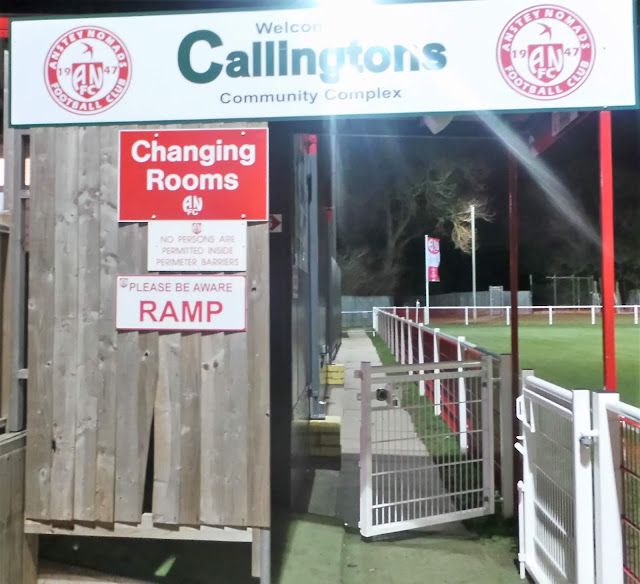 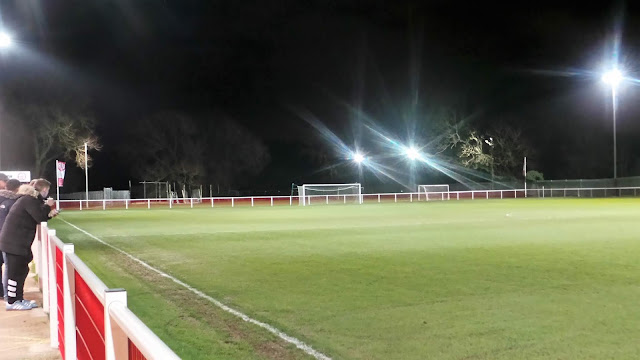 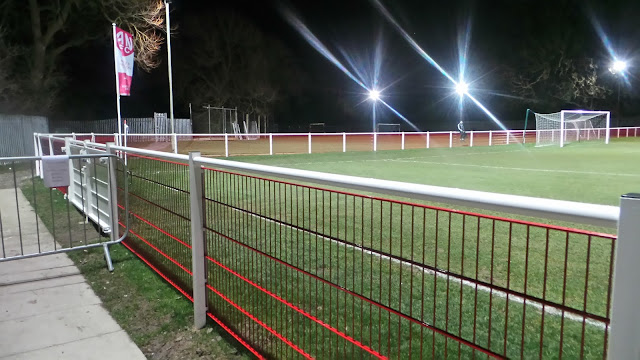 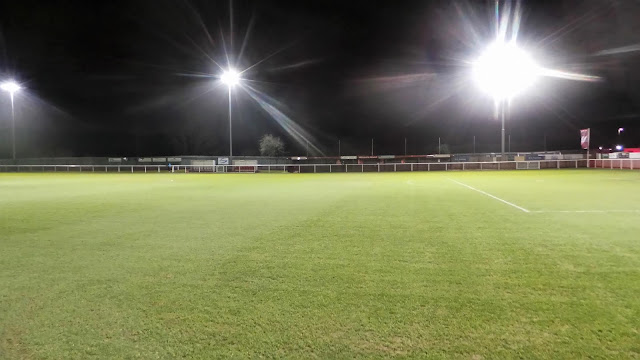 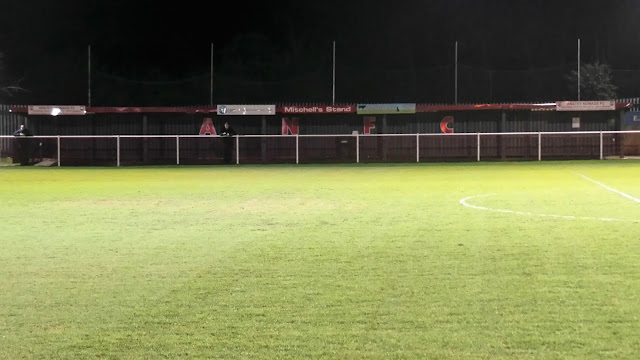 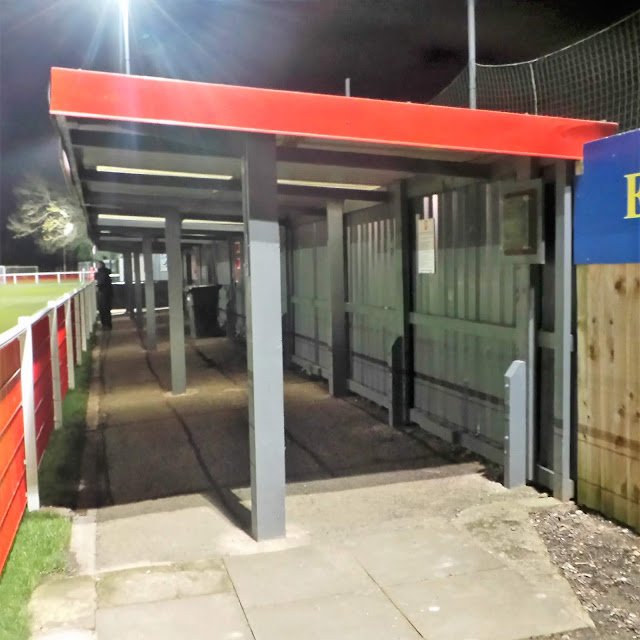 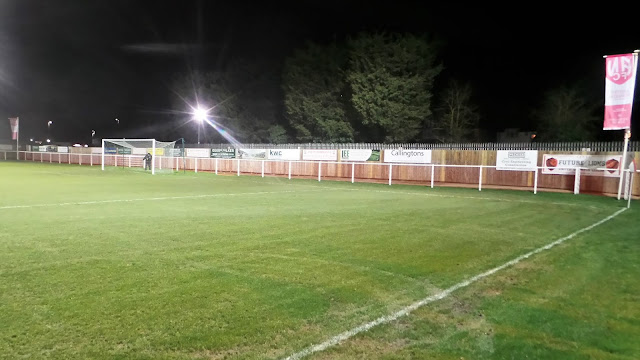 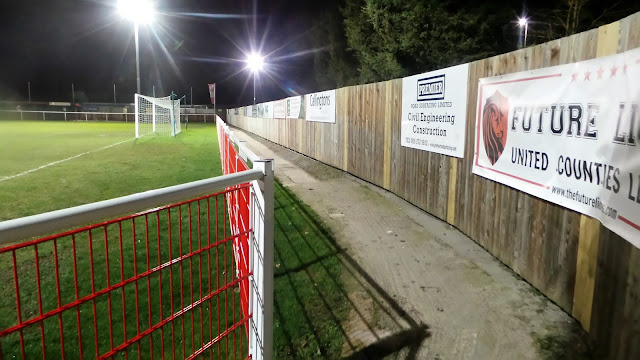