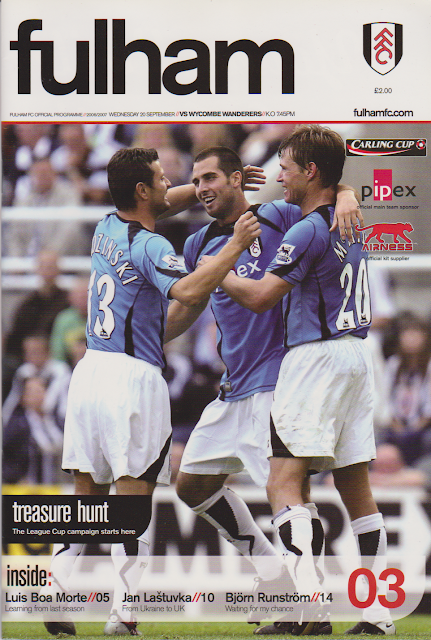 1:  Fulham FC were formed in 1879, as FULHAM ST ANDREWS CRICKET & FOOTBALL CLUB, changing to FULHAM EXCELSIOR later on, before settling on their current name in 1888.

2:  After playing in the West London and Southern Leagues, Fulham joined the Football League in 1907 and have remained there ever since. Their best ever finish of 7th in the top flight came in 2008/09 Premiership season. Their lowest finish came in 1995/96 when they finished 17th in the basement division.

3:  In head to head league records, Fulham can boast a 100% record against both Macclesfield and Southport, although they have not played each other much. Similarly, they have failed to beat both Nelson and Peterborough United in clashes so far. They also have a poor record against rivals Chelsea, winning just 10% of their 70 clashes so far.

4:  Fulham reached the FA Cup Final in 1975, only to lose the final to West Ham United. They were winners on the song front, releasing the brilliant 'Viva El Fulham' by Tony Rees and the Cottagers to the masses. The song included the brilliant line 'And there behind him steady as a rock, that softly spoken tiger Alec Stock'

5:  The club reached the Europa Cup final in 2010 when they lost 2-1 to Atletico Madrid in Hamburg under the guidance of future England manager Roy Hodgson. They also won the Intertoto Cup in 2002, beating the Italian side Bologna 5-3 over a two-legged final.

6:  In 1914 Fulham were the subject of an attempted merger with Arsenal, however, plans were thrown out by the Football League. A more well-known example of a failed merger was in 1987 when a proposed merger with QPR would have seen the club known as Fulham Park Rangers. Fan protests including a half-time pitch invasion as well as Jimmy Hill helping to buy the club saw off the plans which were nothing more than an opportunistic attempt to snaffle the valuable land that Craven Cottage stands on by new chairman David Bulstrode.

7:  Fulham have a number of celebrity fans including David 'Diddy' Hamilton, former TV presenter and Radio 1 DJ who is also matchday announcer at the club. Other fans include Hugh Grant, Daniel Radcliffe, Keith Allen & Richard Osman.

My first visit to Craven Cottage came in 2002. The season before, Wycombe had reached the FA Cup Semi Final and were up to their tricks again this season. In the original game, Wycombe had been leading 2-1 until a late Fulham equaliser had saved the Premiership side from embarrassment.  This replay was a bit more of a tame affair. Jason Cousins was sent off as Wycombe defended stoutly but went out with a whimper, losing 1-0 to the Premiership side, thanks to a Barry Hayles goal. Fulham complained of Wycombe's dirty tactics, but in truth, we missed our chance in the original game. 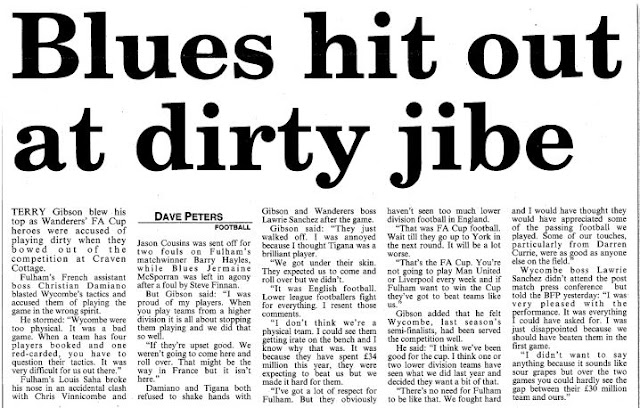 My second visit came at the start of 2006. I was trying to see a game in every round of the FA Cup, a feat I managed up until the Quater Final. In what was my 11th FA Cup game oif the season, Fulham fielded a reserve side. Craven Cottage was a much-changed ground by now, having been redeveloped whilst Fulham groundshared at QPR. Despite Fulham fielding a much-changed side, they were expected to triumph over their League 2 opponents. However, Orient had other ideas and were 2-0 up at half-time, thanks to goals from Joe Keith and Craig Easton. Collins John missed a penalty in the second half for Fulham thanks to a great save from Orient keeper Glyn Garner. Though John pulled one back after 50 minutes, Orient hung on for a famous victory and a notable giant-killing. 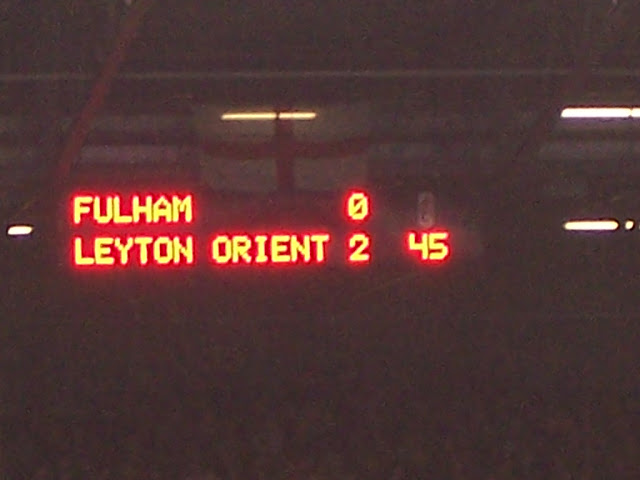 The 3rd visit was my most memorable. This time it was my team Wycombe who were doing the upsetting, Goals from Jermaine Easter and Tommy Mooney were enough to see Wycombe progress to the 3rd round of the League Cup for the very first time. That run continued to the Semi Finals where they met Chelsea, drawing 1-1 at home before losing the tie at Stamford Bridge. 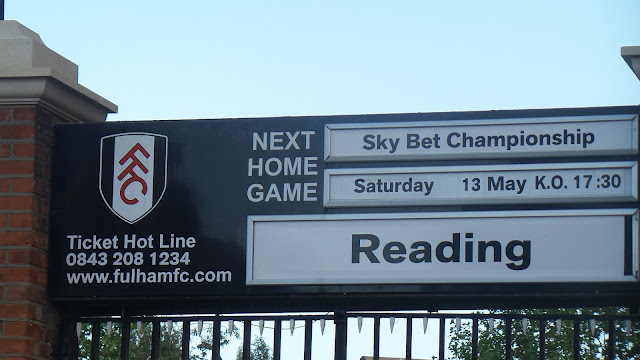 I'd enjoyed making revisits to various grounds over this season, sampling them as a bone fide groundhopper for the first time and also being able to update my blog. Originally on this day, I'd been planning a treble of games at Studley, Stonehouse and Abingdon, however owing to my car being in for repair for longer than I expected, I was going to be restricted to public transport. Due to the lateness of my planning, the only viable and cost-effective option was something in London. It boiled down to two options - either the Combined Counties League Cup Final at Bedfont, or the Fulham v Reading game in the Championship playoffs. The latter was my preferred option, especially when tickets were a bargain £20 for Adults. I've paid more than that in League 2 on several occasions in recent seasons, and the Conference Playoff Final the following day was over double that for a ticket. Considering that a pleasant walk along the River Thames to a nice ground was a lot nicer option so sitting in a quarter full soulless plastic bowl, I was getting the better option on more than one count. 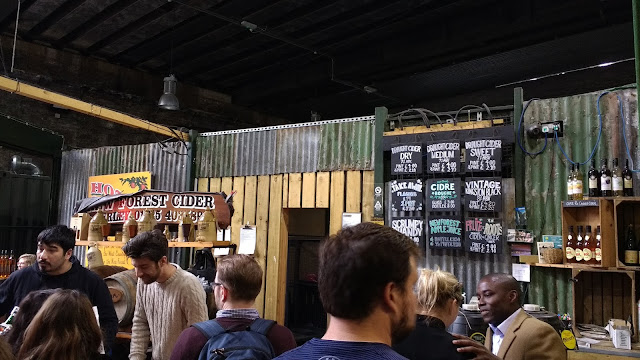 However, it looked as if I was going to have to do my second choice at Bedfont. Tickets were on sale for previous purchases only, and I had none, well, not unless you count the Leyton Orient game in 2006 and that was long before the current ticket system came into place, so they had no records of my purchase. Thankfully my mate and fellow groundhopper Dan came to the rescue. Despite being a Braintree fan, he had already been to Fulham this season and was also going to this game. A quick tweet and a Paypal transfer was arranged, with him ordering my ticket and sending it back to me via email. I'd have preferred it in the Riverside Stand as opposed to the Putney End, but beggars can't be choosers. The best thing about this game was the late kick off of 5.30 which meant I could have a full day out in London at Borough Market and The Stable Cider Bar which I had a voucher for a free tasting board. I'd be without the worry of driving home later too, although it would be tight for me getting home. The buses from Amersham to home were infrequent and I'd have to wait for 2 hours if I didn't get the 9:42 bus home. 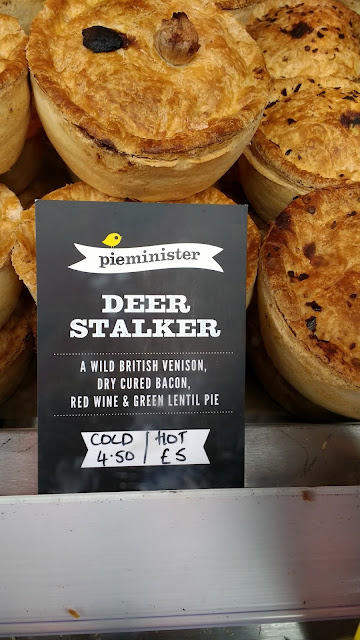 On the day of the game I woke around 8 am, having a burger for breakfast before getting ready and getting my things together. I left around 10, walking to the bus stop around a mile from my house. The return to Amersham Station was £5.20 for the 5-mile journey with me having to wait a fairly reasonable 15 minutes for the next bus at 10.30. It took a while longer than driving as the driver hadn't a clue as to what route he was taking and turned around to have a five-minute debate with passengers as to what was the best option. As a result, I missed the 10.47 train and had to wait nearly half an hour for the next train. When I got on, I was glad to see fellow hopper Anwar who was off to Bedfont with his son Hicham as it was a new tick for him. We discussed options for Tuesday and decided that Ibstock United was our best option out of that, Walsall and Bishops Stortford. The conversation didn't last that long as we both had to change at Harrow on the hill, as I made my way to my first planned stop at Borough Market. I discovered this place thanks to Mike Graham of the Two Mikes radio show on TalkSPORT and every time I had a game in London I totally spoiled myself. Favourite place by far was the New Forest cider stall where I had a pint of Olivers Cider. I really pushed the boat out later with a £13.50 bottle of champagne cider from a small producer called Gospel Green which I was unlikely to be able to find anywhere else. All were nice, as was the Deer Stalker pie that I got from the Pieminster stall to soak it all up. Usually, I go for the cheaper options, but I totally throw that idea away when I am at Borough Market and love to indulge my appetite for discovering new tastes. 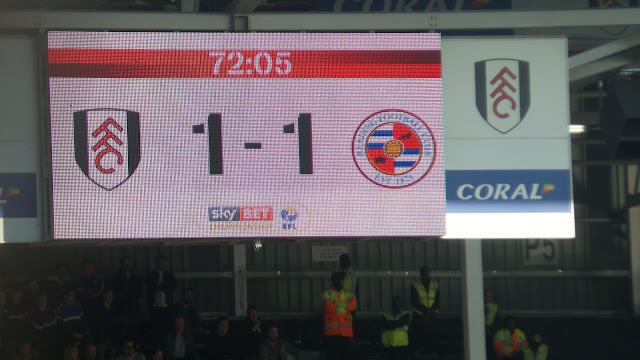 After that, I walked the 1.5 miles over London Bridge to the Stable cider bar in Whitechapel. There I had a free tasting board, plus another pint. I got on a nice direct train to Fulham, but complacency got the better of me. I thought I'd have a nice half hour kip on the way, only problem was, I woke up 2 hours later in Stratford. With the time two minutes before kick off, there was no way I was going to make kickoff as I was an hour away. Wide awake by now, I nipped over to the other platform and made my way back the other way. I tried to watch the game on my Sky app, but as soon as we got nearer the city it was all tunnels and no signal. I got to the ground after half time, and after pleading my case at several gates, I was finally let in by a steward that looked like former Reading keeper Shaka Hislop. I was in there five minutes before Fulham equalised to make it 1-1 and joined in the celebrations. By some quirk of fate I got a decent seat along the side for the time I was in there. Soon the game was done and it was time to go home. Time was tight to get back to Amersham for the last bus, but I made it, having ten minutes to spare. I got in 10 minutes before Match Of The Day, having had a good day despite my sleepy mishap. 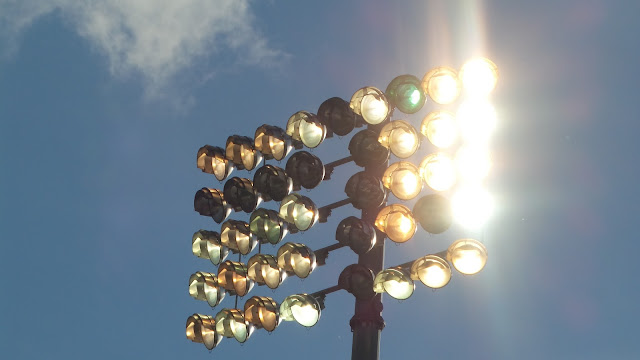 The walk to CRAVEN COTTAGE must be one of the most pleasant if you are coming on the train. Getting off at Putney Bridge Station, you have a lovely 15-20 minute walk along the side of the Thames to get to the ground. There's plenty of options for eating and drinking around that area, though I can't really recall any places that I went on my previous visits. Looking online, there appears to be nothing special, although the Rutland Arms, just over a mile away in Hammersmith looks as good as any and was famous for being in the opening titles of the TV series 'Minder'. If you have specialist tastes like me then you are probably better off doing your own thing in London then travelling in. 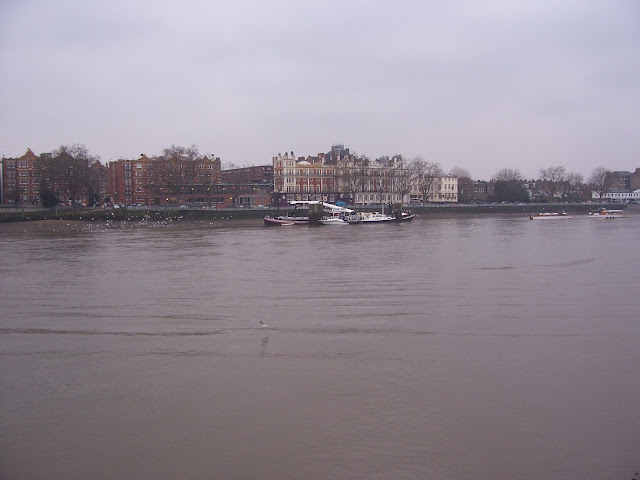 Once you get to the ground, it's set in a really nice area and is well-kept. The famous cottage that the ground is known for is actually a cricket pavilion after the original cottage was demolished many years ago. The Johnny Haynes Stand is the oldest of the four stands, with supporting pillars, having dated from the 1930's. The other three stands - The Putney End (part of which houses the away fans), Hammersmith End & Riverside Stand are all new looking stands and although these also have supporting pillars, you'll be unlucky to have your view impeded. Food in the ground is the usual overpriced fare, but overall the ground is well worth a visit and one of the better 'big' grounds to visit. 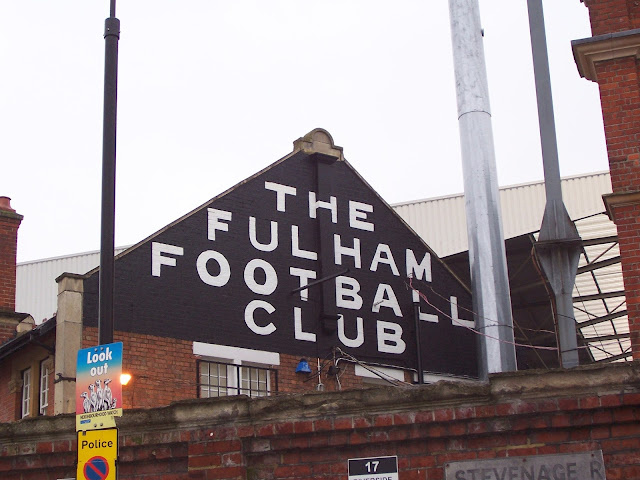 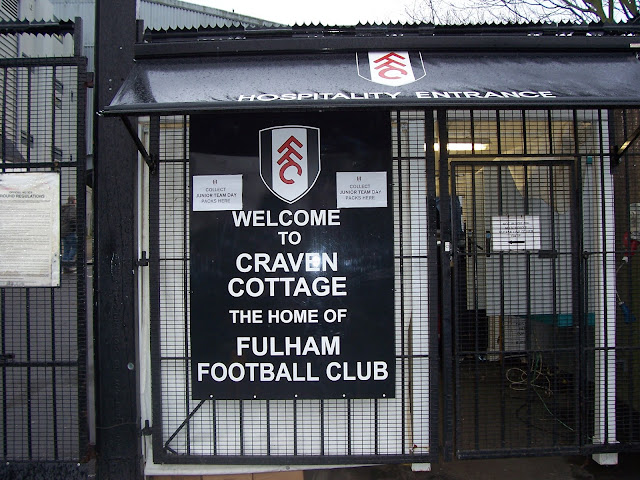 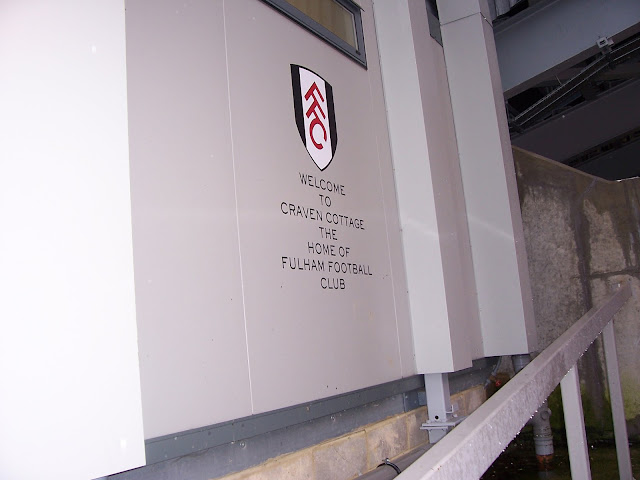 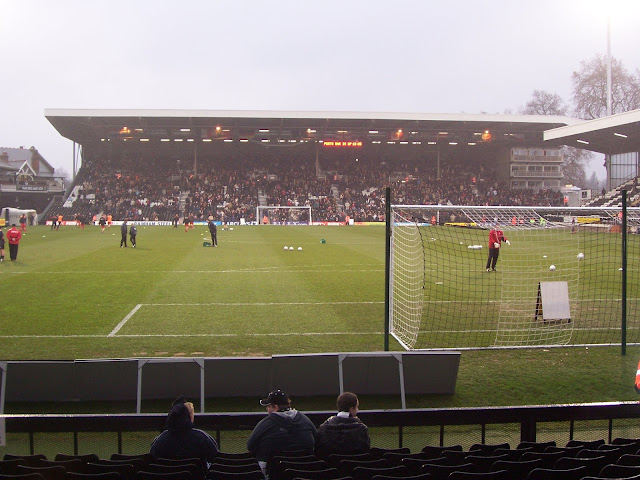 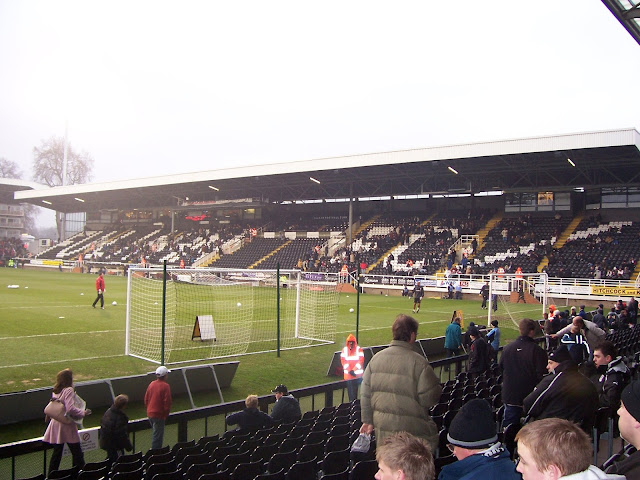 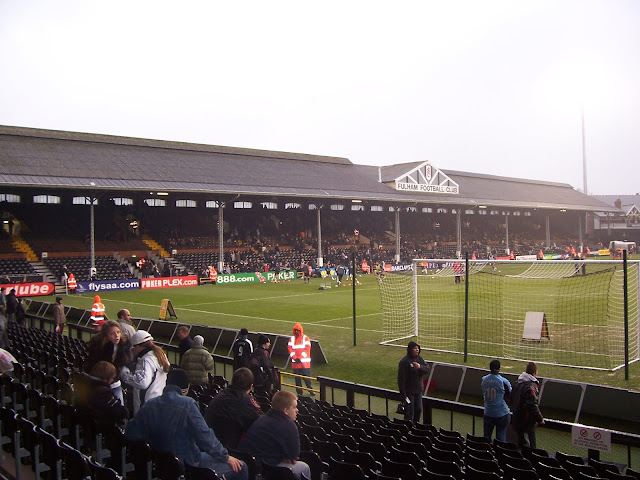 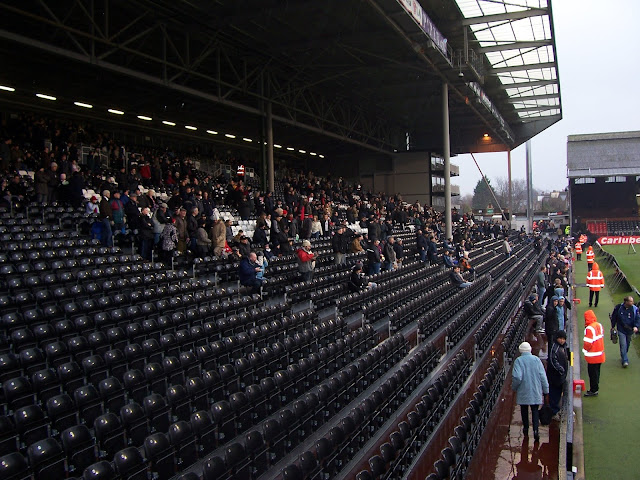 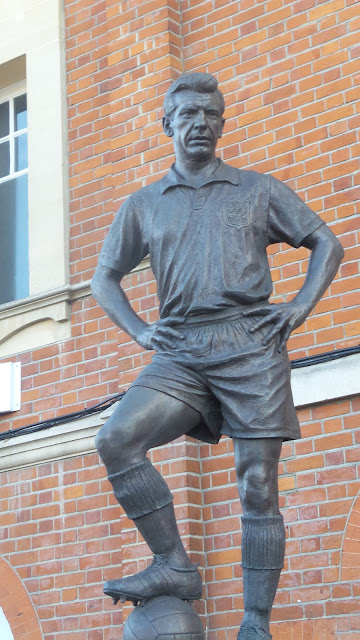