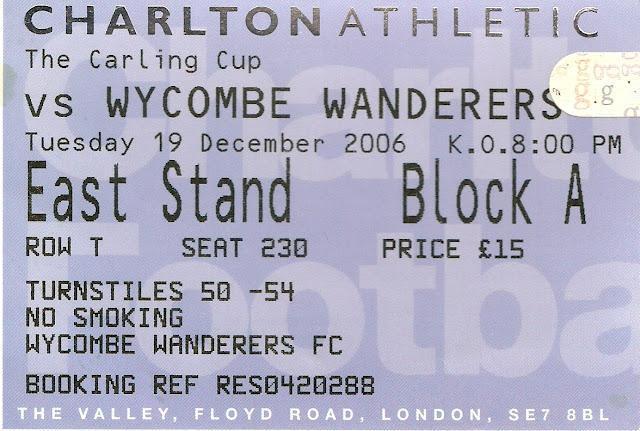 1:  The club was formed in 1905, thanks to an amalgamation of a number of local youth clubs. They've played at The Valley since 1919 after a nomadic start to their existence.

2:  After playing in the Kent League and Southern League, Charlton Athletic joined the Football League in 1921. The club stagnated at first but enjoyed rapid progress up the leagues between 1934 and 1937. In consecutive seasons under club legend Jimmy Seed, they progressed from Division 3 South to Division 1, culminating in their highest ever finish of 2nd in Division 1 in 1937. The success continued up until the outbreak of World War 2.

3:  Despite finishing 7th in the Premiership in 2004, the club endured one of their worst ever seasons since joining the Football League last season as they finished 13th in the third tier. Under controversial owner Roland Duchalet, recent times have seen fan protests and regular management changes, culminating in stagnation and eventual relegation.

4:  Happier times came just after the war when Charlton reached two consecutive FA Cup Finals. After losing 4-1 to Derby County in the 1946 final, they lifted the trophy a year later, beating Burnley 1-0 at Wembley. In recent times, their best progress was the Quarter Final, last reached in 2014 with a 2-0 defeat to Sheffield United.

5:  In the League Cup, 2006/07 saw Charlton's best ever progress. After beating Carlisle United, Derby County and Chesterfield, they suffered a giant killing at the hands of League 2 Wycombe Wanderers who triumphed 2-0 at the Valley.

6:  In 1984, due to severe financial difficulties and concerns over ground safety, the club were forced to move away from the Valley as they couldn't afford to make the necessary ground improvements. They lodged first at Crystal Palace's Selhurst Park and then West Ham's Upton Park before returning to a revamped Valley in December 1992 thanks to sales of players such as Rob Lee.

7:  Charlton Athletic are nicknamed 'The Addicks'. The nickname is believed to originate from the early days when the players were rewarded with a win by fishmonger Arthur 'Ikey' Bryan with a haddock & chips supper.

8:  Charlton Athletic's main rivals are Millwall, established as far back as 1910 and Crystal Palace which came about as a result of the groundshare in the late 1980's.

10:  Famous Charlton fans include comedian Jim Davidson, TV producer Michael Grade and Bucks Fizz singer Cheryl Baker. Fictionally, they can also count Joan Mavis Trotter. This was famously announced in Only Fools and Horses as she gave her son Rodney Trotter 'Charlton' as a middle name. 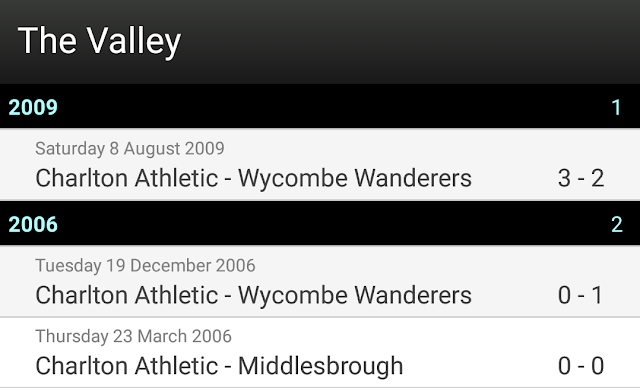 My first visit to the Valley was for a dull 0-0 draw against Middlesbrough in the FA Cup Quarter Final. I had been planning to do a game in every round of the FA Cup that season, starting at the Extra Preliminary round (which in my case was Stourbridge v Glossop North End) and carrying on to the final. This sadly proved to be my last in that run, a £400 price on a semi-final ticket from a tout website really put me off completing my journey.


I was lucky enough to get a ticket for this game through my mate Adam, who was a member at Charlton Athletic, so I was able to get in at the cost of £25. On the day, he picked me up at mine and gave me a lift to our local train station, from where we got the train to Charlton. Upon getting there, I got myself a chicken biriyani (little did I know then that that wouldn't be the last I would hear of it) Then off to the pub for a pint. The game itself was shown on the BBC, and they must have wondered why they bothered, as both sides played out a dismal 0-0 draw. On the way home I started to feel really ill and when I got home I was violently sick and was up all night with the trots. I had a hospital appointment (for an unrelated matter) the following day and they told me it was probably down to some uncooked rice. I also went up to Birmingham to see my brother at Uni in Birmingham but was too ill to do anything. Even the day after, the Saturday when I went to Leyton Orient v Wycombe, I was still too ill to eat anything and had to pack a spare pair of pants 'just in case'. Luckily they were not needed and I was rewarded for my determination with a 2-1 win. 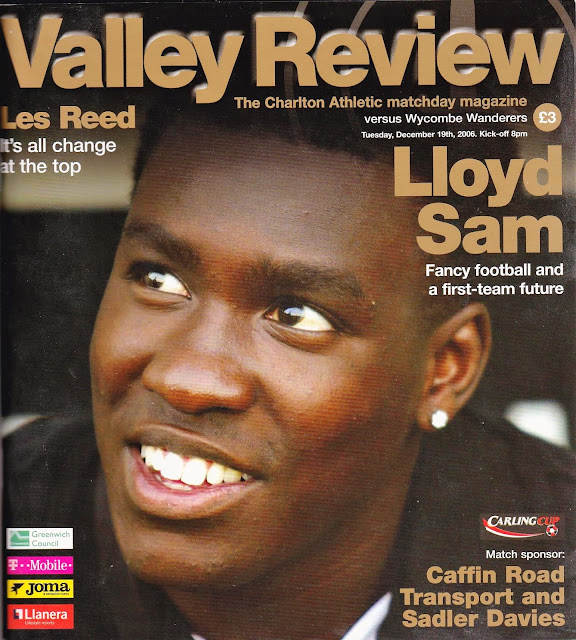 Luckily the next trip held much better memories. Wycombe had been on a great run in the League Cup, and against all the odds had made the Quarter Final. The fairytale continued as Wycombe won 1-0 at a side who the previous week had played Liverpool. Jermaine Easter was the hero, just as he was in the next round where we drew 1-1 with Chelsea in the first leg of the semi-final. I decided to play it safe this time, having Saveloy and Chips, not wishing a repeat of last time. I don't recall a huge amount about the trip, but I believe I took the supporters coach to this one.

I also made a visit a few years later, for Wycombe's first game back in League One. In an untypical Peter Taylor performance, it was a good game and we were unlucky to lose 3-2. Five players made their debut for Wycombe, but it was former West Ham and Scotland man Christian Dailly who gave Charlton the lead before Nicky Bailey made it 2-0 a couple of minutes later. The hosts dominated and looked as if they were going to win at a canter, but Chris Zebroski pulled one back before halftime. Charlton restored their two-goal lead with a header from Miguel Angel-Llera before Zebroski got his and Wycombe's second with 20 minutes to go. Despite keeper Scott Shearer going up for a number of corners, Wycombe couldn't find an equaliser and started the 2009/10 season with a defeat. The Charlton fans were great and I was amongst a group of Wycombe fans that went for a few pints in London with them after the game, as I'd opted to go by train that time. 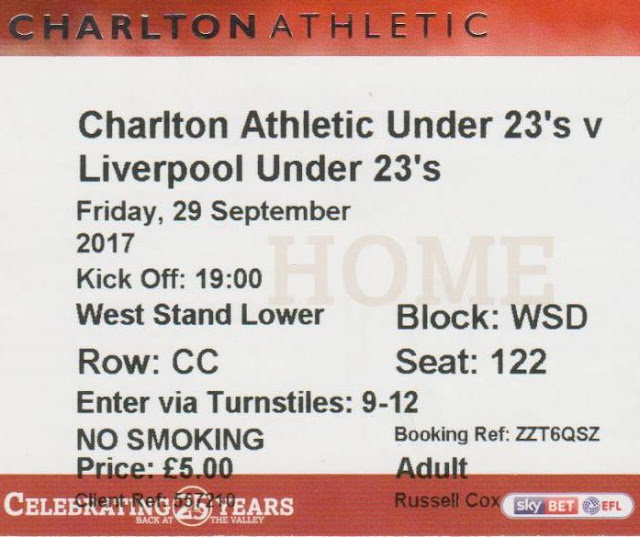 I'd been hoping to do a game up north on this Friday, but with both of my hopping pals busy elsewhere, I decided to go south. There was an option in Corinthian, but it would more than likely involve a Friday night slog round the M25. I didn't fancy that and with my Charlton blog needing a spruce up, I decided to do a revisit for their Premier League 2 game against Liverpool as entry was only a fiver. It would be a good start to my week off and would mean that I could have a couple of pints in central London before getting a train straight to Charlton. It was a shame that a couple of my usual haunts had closed and that there was nothing nearer Charlton itself, but it would still be a decent day out. 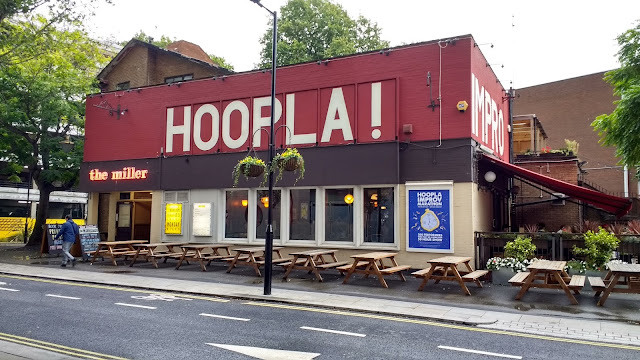 On the day of the game, it was one of the busiest days at work for a while and I didn't get away until 1. I then did my shopping, getting som fancy 'Men's Health' Sausages for my lunch. I didn't have much time to spare after luch, having a bath and getting dressed, as well as catching up online. I left around 3.10, getting to the station 20 minutes later. I then had a 10 minute wait for my train, changing at Harrow On The Hill and Finchley Road to get to London Bridge, the stop near Borough Market. Instead of going to the market, which was closing soon, I went to the Miller pub, near Guys Hospital. I had a pint of London Glider Medium Sweet, which was nice enough, although I prefer a dry one. I was going to have a second pint, but the Farmer Jim's one that I had wanted had sold out. Instead, I headed back to the station, getting the 5.20 train which was 15 minutes earlier than I had planned. I got to Charlton just before 5.50 and after a wander around opted for Satay Chicken skewers and chips for £6.80 at a Chinese called the Dragon and Phoenix. I was a bit dismayed when the  Satay Sauce arrived in a side pot as it bought back poor memories of the rubbish Chinese I'd had at Radcliffe with cold sauce. Luckily though, it was very nice and everything was really well cooked. I went to the ground, getting some outside pictures before collecting my ticket from the swanky reception and going in. 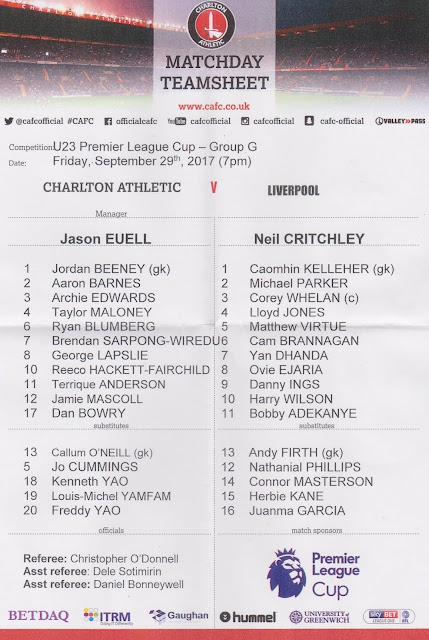 It was just before 6.30 when I got in and I noted that the most well known player was Danny Ings, who was starting for Liverpool. There were a few others I recognised from Football Manager and watching Liverpool youth sides previously at St Helens. I had a great seat anyway, near the halfway line and at a decent height. Liverpool had the bulk of the possession at the start, but it was Charlton who opened the scoring after 18 minutes . It was a really well-worked goal, splitting the visiting defence open. Reeco Hackett-Fairchild supplied the final ball for Terrique Anderson who slotted calmly past visiting keeper Caomhin Kelleher. Both sides had chances and played some good stuff leading up to half time. Just before the break, Liverpool got an equaliser out of nothing. Bobby Adekanye crossed from the left, Charlton keeper Jordan Beeney made a hash of what should have been a simple cross and Harry Wilson was there to poke home, right on the line. Despite his error, Beeney comes from a real goalkeeping football dynasty - brother Mitchell plays for Chelsea U23 whilst Dad, Mark, was a well known keeper for Leeds United in the 1990's. The second half saw no further goals, but chances for both sides. Apart from a Danny Ings header straight at the keeper, Charlton had the better chances. It was an impressive result for them, seeing that Liverpool had won six in a row prior to this game.

The game ended quite late and it was past 9 by the time I got out the ground. It was nice to be wished a safe journey home by the stewards, not often that it happens, let alone at a league club. All in all it was a nice relaxed atmosphere at the ground. According to TFL, the best bet was to take a bus to North Greenwich and luckily my bus was just arriving as I got to the stop. We drove past Canary Wharf and it looked really smart lit up in the dark. I was content that I'd made the right choice, had my Braintree pals been available, I'd have headed to Haverhill. That game saw someone collapse, with it being serious enough to see game postponed, so I'd dodged the bullet of a wasted journey there. From the flashy looking North Greenwich station, I got a train to Finchley Road and after a further change at Harrow, I got back to Amersham at 10.35.  Twenty minutes later, I was back home. I finalised my blog whilst listening to the Two Mikes before watching Coronation Street and going to bed. 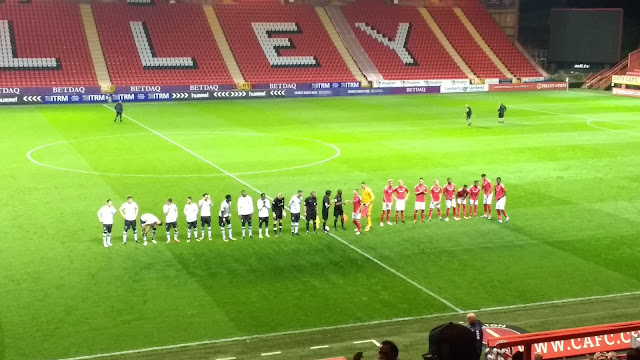 THE VALLEY, having been in the Premiership have a smart ground which is one of the smartest in the lower leagues. It's all-seater with a capacity of over 27,000. Away fans are given the Jimmy Seed (South) stand which stands alone with a capacity of 3,000. The other 3 sides are joined in the corners. For parking, you'll have to walk a bit as the roads in the vicinity of the ground are 'residents only' parking. There are also a number of industrial units that provide parking for a price, while the nearest train station, Charlton, is a short walk away. 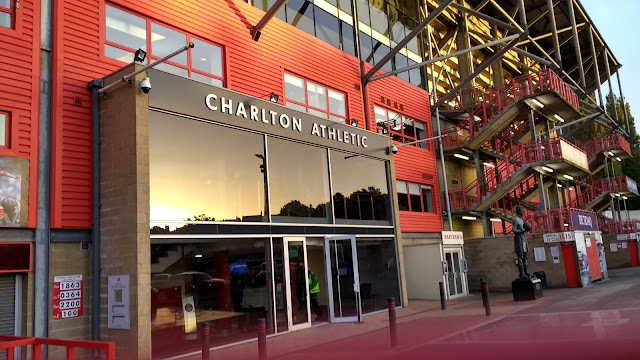 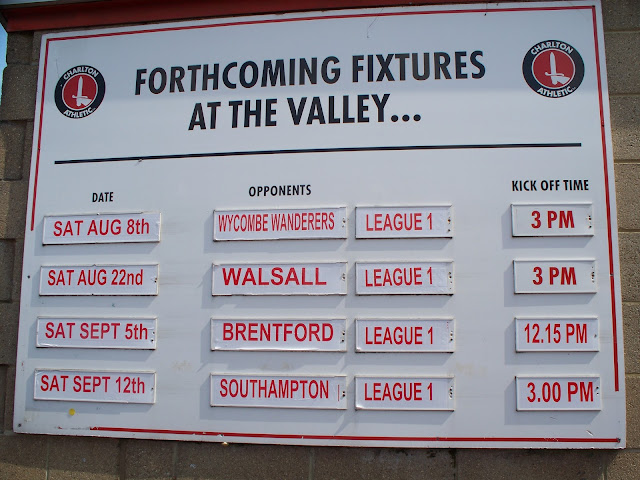 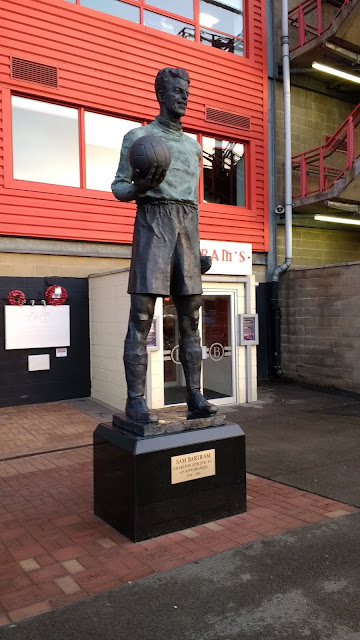 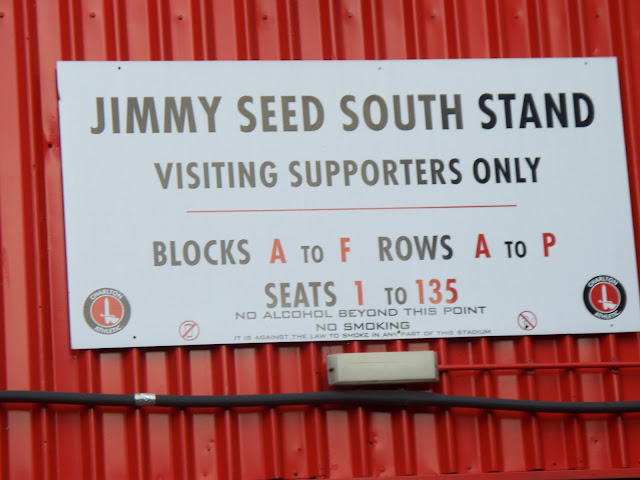 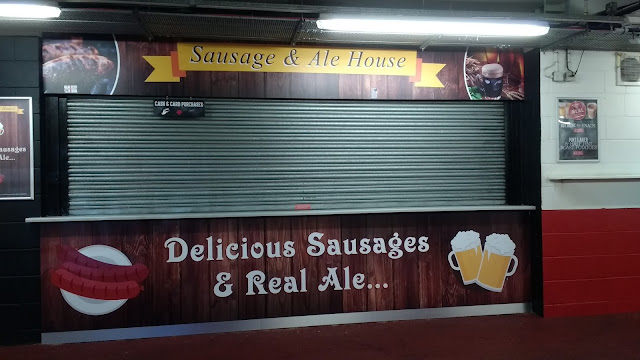 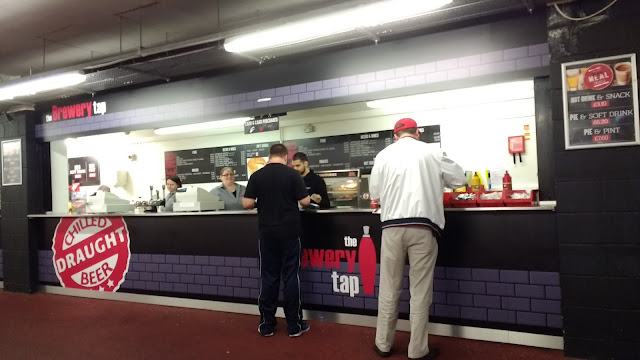 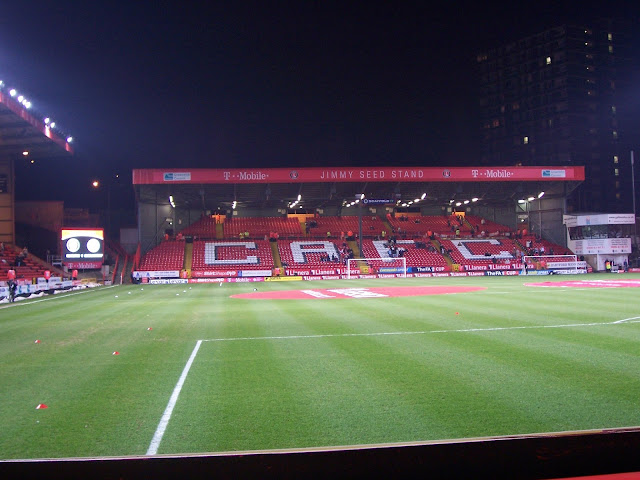 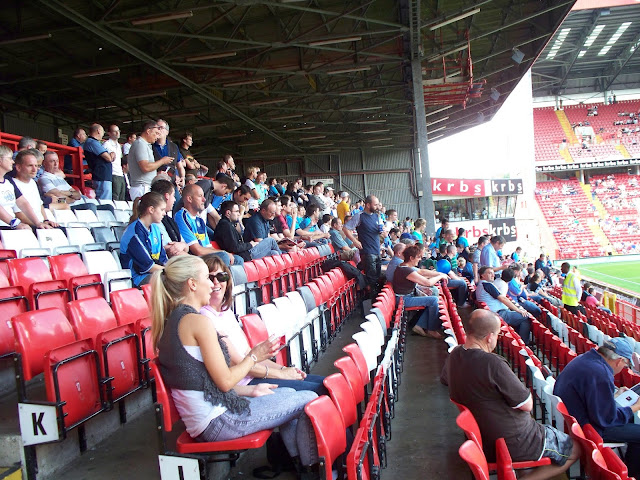 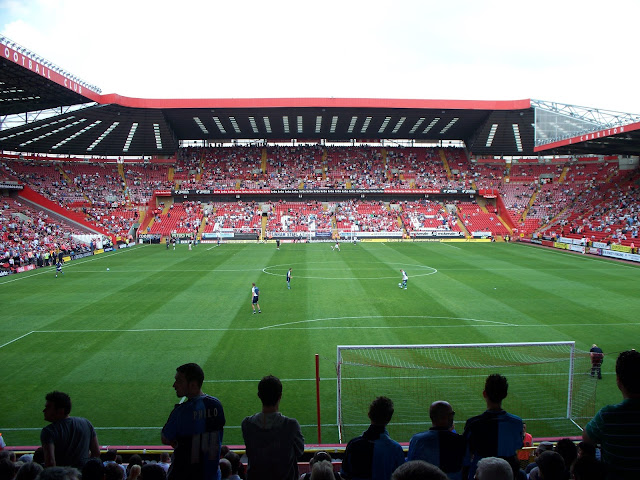 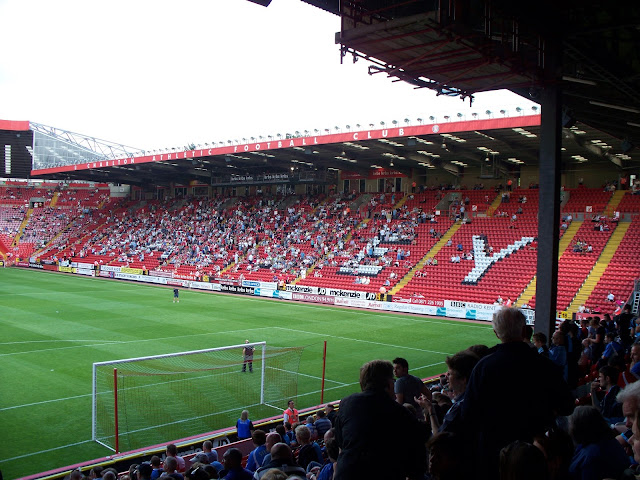 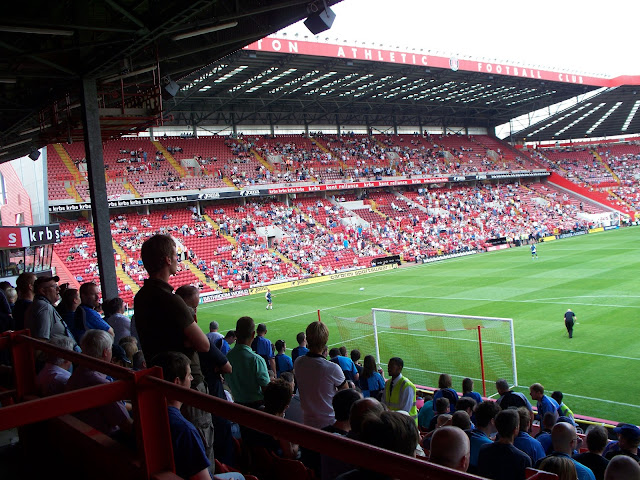