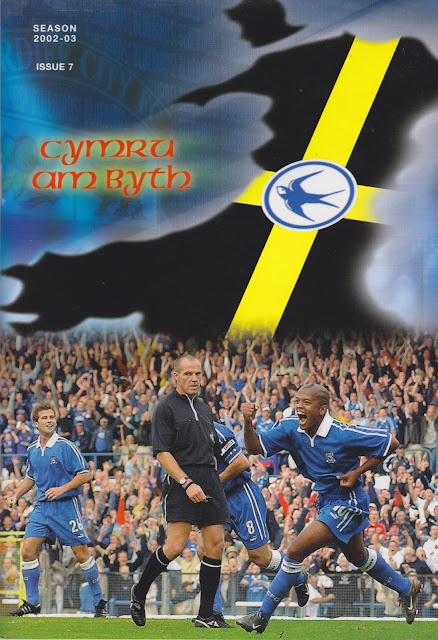 1:  Ninian Park was opened in 1910. It was named after Lieutenant-Colonel Lord Ninian Crichton-Stewart who was a British member of parliament killed during the first world war.

2:  Cardiff City's most successful period came in the 1920s when they had a prolonged spell in the top flight. Their best ever finish came in the 1923/24 season when they finished runners-up to Huddersfield Town.

3:  In 1927 Cardiff City became the only ever team to take the FA Cup out of England as they beat Arsenal 1-0 at Wembley Stadium. They have also reached the final on a number of other occasions - most recently in 2008 when they lost to Portsmouth.

4:  Cardiff Ciry reached the 2012 League Cup Final, losing on penalties to Liverpool after a 2-2 draw at Wembley Stadium.

5:  Regular forays into Europe have been enjoyed with them reaching the 1968 Cup Winners Cup semi-final where they lost to Hamburg. They got into Europe by winning the Welsh Cup, a route that was closed in the mid-1990's as UEFA would only allow sides that play in the Welsh domestic league to represent Wales in Europe from then on.

6:  Ninian Park's record attendance came in 1959 when over 62,000 crammed in for a Wales v England international.

7:  The ground hosted a number of internationals. The most notable came in September 1985, a Mexico 86 qualifier between Wales & Scotland. The Scots eventually went through but the sad death of Scotland manager Jock Stein who died in the dugout will be remembered more than the result.

8:  In total 7 rugby games were played at Ninian Park. Wales won 3 and lost 3, with the other being a neutral game as Samoa beat France 56-10.

9: Legendary reggae singer Bob Marley once held a concert at the venue. As part of his Rastaman Vibration Tour he played through pouring rain on the 19th June 1976. He was only a fill in though as Steven Stills (no me neither) was originally meant to play but was unavailable.

10: The last ever Cardiff City game to be played at Ninian Park was on 25th April 2009. Roy Keane guided his Ipswich Town side to a 3-0 win in his first ever game in charge of the Tractor Boys. 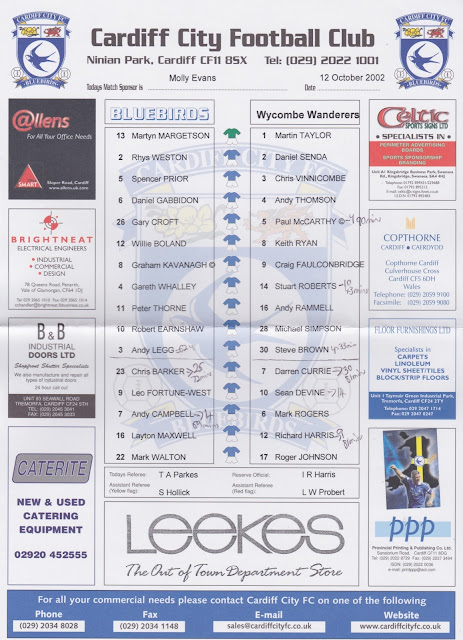 My first visit to Cardiff City's Ninian Park came at the start of the 2001/02 season. Wycombe came into this Division 1 season fresh from an FA Cup Semi Final appearance the previous season but were always going to be second favourites against big spending Cardiff City. Over 17,000 fans packed into Ninian Park for this season opener which was the Bluebirds' biggest opening day attendance for over 30 years. The passionate Cardiff City fans roared their team on to victory with a 17th minute Daniel Gabbidon strike being enough to separate the two sides. Wycombe had a fair bit of possession but just didn't have the quality up front to turn it into goals. It was a rare mistake from Martin Taylor that gave Cardiff victory but my overriding memory of the game was the home fans. They spent all game staring at us and not watching the game with their chants about hating the English being sung at regular intervals.

My second and final visit to the venue came on Saturday 12th October 2002. Again the result was 1-0 to the Welshmen. Cardiff were a bit depleted due to some of their players being called up to their national team, but they were still the overwhelming favourites. It looked as if that tag was well justified too when the hosts dominated the opening 15 minutes and really should have gone ahead. Wycombe soon got a grip though and probably had the better of the game for large periods. However, it was Cardiff's million pound man Graham Kavanagh who got the winner ten minutes from time to net them victory. Again it was a hostile set of home fans with them chanting 'Played Four, Won Four; in reference to their country's excellent start to the Euro 2004 qualifiers, a start they sadly never managed to continue. Coming out of the ground was an eye opener too. The police formed a line to let the Wycombe fans get back to the coach safely, but without provocation a minority of planks started kicking the policemen and trying to trample over them to get at us.

NINIAN PARK was Cardiff's home before they moved a few hundred yards away to their new stadium. With their hardcore fans it could be an intimidating venue. Away fans were given half of a terrace called The Grange End behind a goal, shared with the hostile Cardiff fans, who just tended to not bother watching the game, just staring and shouting abuse, and on occasions trying to throw stuff over the netting into our half of the stand! The other end was called the Canton End and was all seated. The 2 side stands both had 2 tiers, with terracing at the bottom and seating at the top.

The ground had a great atmosphere when full, thanks to the passionate fans. I never ventured far from the ground but there were a few stalls near the ground with a decent hog roast being had on one occasion. The pictures below are not my own, I can't remember where I got them from but I never had a digital camera when I visited. The ground has since been demolished and is now residential housing. 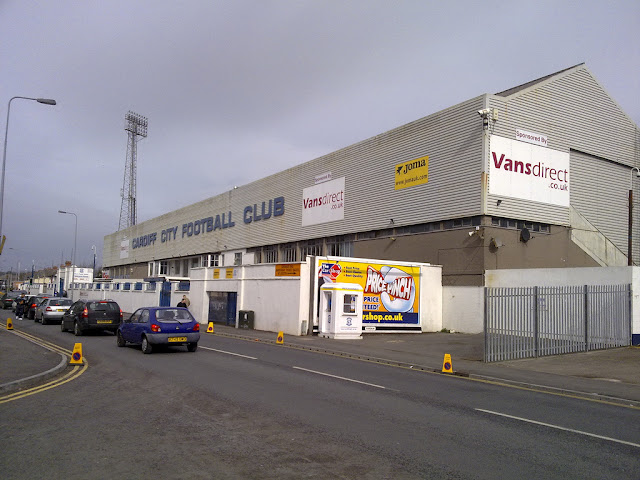 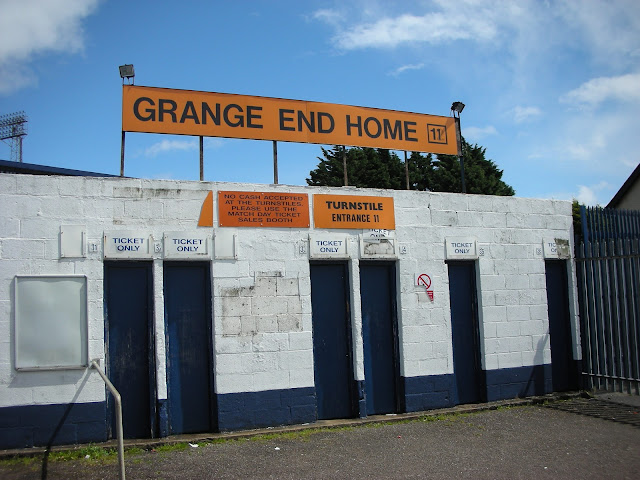 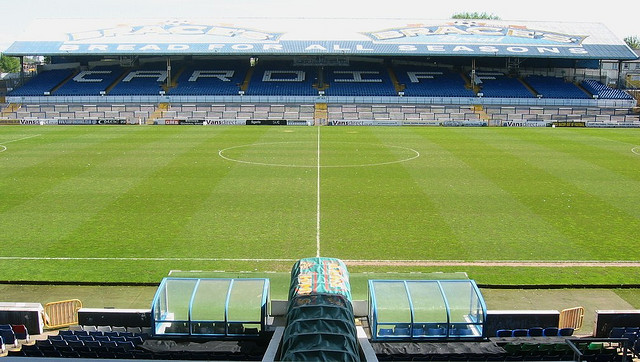 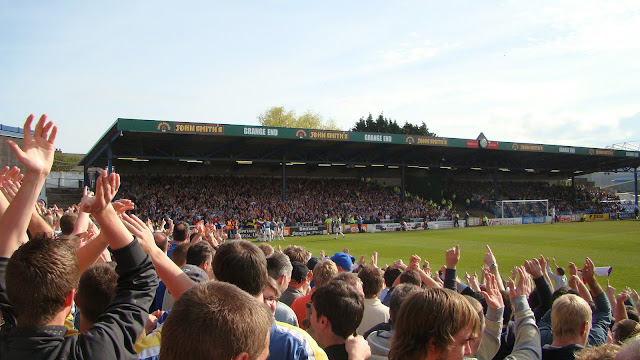 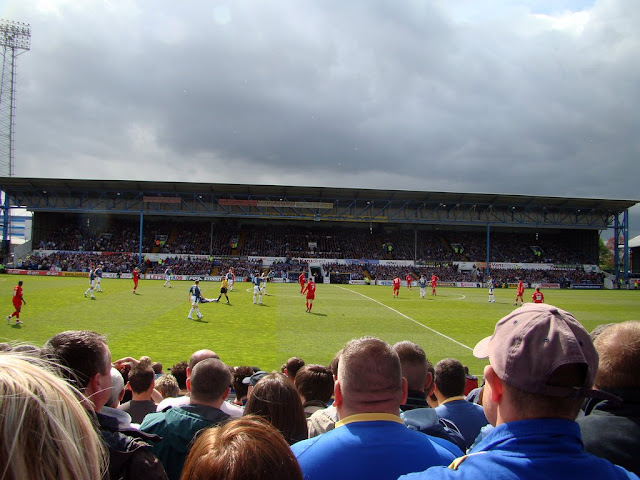