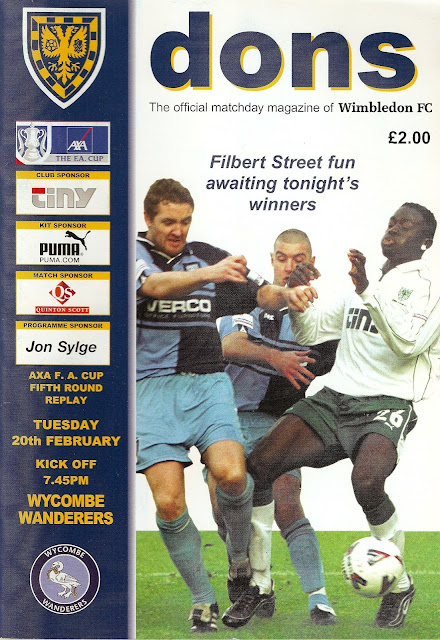 1:   The club was formed in 1905 when owners of the Crystal Palace FA Cup Venue wanted a team to play on their ground and take advantage of the local catchment area. The venue hosted 20 FA Cup Finals and the site is now home to the Crystal Palace Athletics Centre which was home to current Combined Counties outfit AC London for a short while.

2:  Crystal Palace stayed at their original home until the outbreak of World War 1 until they were forced to move out by the authorities. They used two temporary venues - Herne Hill Velodrome and The Nest, former home of the now defunct Croydon Common FC. In 1924, they moved to Selhurst Park where they remain to this day. As well as being home to Crystal Palace, London rivals Charlton Athletic shared there from 1985-91 and Wimbledon FC lodged there from 1991 until their demise in 2003.

3:  Originally a non-league outfit, Crystal Palace played in the Southern League until 1920 when they joined the Football League Division 3 South. They were a 4th Division side in the early 60's and a 3rd Division side in the mid 70's, however, since 1976, they have never dropped out of the top two tiers of English football, alternating between the two divisions on a regular basis.

4:  Their best ever league finish came in the 1990/91 season when they finished 3rd behind Arsenal and Liverpool in the top tier.

7:  Crystal Palace were denied a European place in 1991 as English clubs were facing a ban from Europe following the Heysel Stadium tragedy. They did enter the much-maligned Intertoto Cup in 1998, only to lose 4-0 to Turkish side Samsunspor over two legs.

9:  A fierce rivalry with Brighton & Hove Albion exists after a number of controversial incidents in the late 1970's whilst locally, Millwall and Charlton Athletic are their main foes. 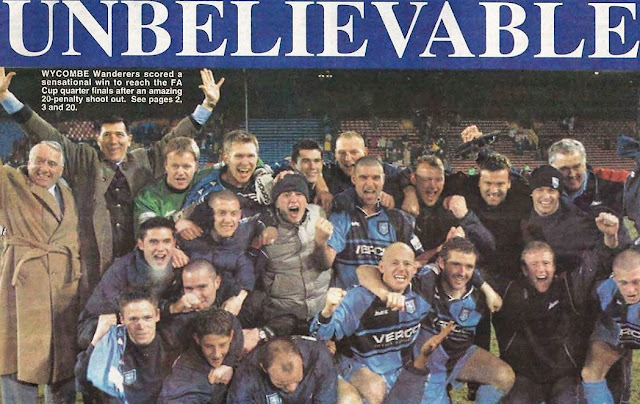 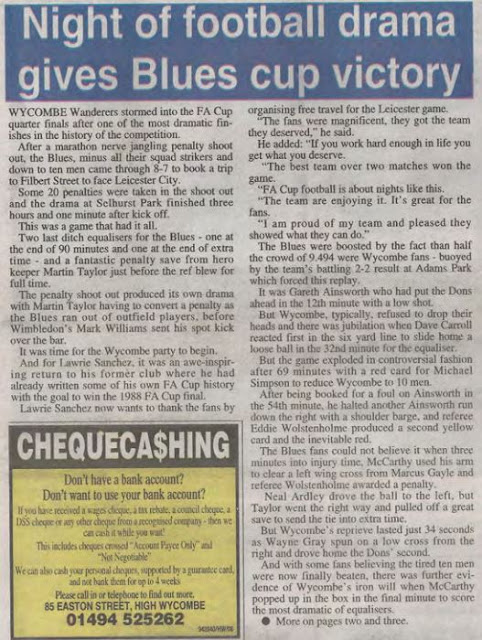 My first visit to Selhurst Park came during Wycombe Wanderers' memorable run to the FA Cup semi-finals of 2001. Sadly, with no digital cameras at a reasonable price and this being long before social media, I don't have much to remember the game by. A few days previously, Wycombe had drawn 2-2 in the first game and that had plenty of drama and controversy. However, the replay would be far better and I'd rate it as the best and most memorable game I have ever seen in my life. I travelled with my Dad's mate Dave and despite us leaving at 4, we were lucky to make kick off. The M25 was as pathetic as it is today and had it been now, I'd have gone on the train and made a day of it. We got to the ground at 7.30 after chronic delays on the cursed road, with a large number of our support didn't even make kick-off.

Current Wycombe Wycombe manager Gareth Ainsworth put Wimbledon ahead after 13 minutes but Dave Carroll equalised two minutes after the half hour. On 69 minutes Michael Simpson was sent off for a second yellow card and Wycombe looked to be out when Wimbledon were awarded a penalty with almost the last kick of the game. However, goalkeeper Martin Taylor was the hero when he saved the spot-kick to take the game into extra time. Again, Wycombe's cup run looked to be over when Wayne Gray scored after 34 seconds, but Paul McCarthy's 119th-minute equalizer took the game to a penalty shoot out. Keeper Martin Taylor was again the hero in a tense penalty shoot-out. Although it was another slow journey home, with me having bad toothache, it was still the most memorable and enjoyable night of me supporting Wycombe.

I'd wanted to go back to Selhurst Park for ages, especially seeing as I'd seen my best ever game there. But the opportunity rarely came up, and when they did, tickets were crazily expensive or you had to buy a membership to even be sold a ticket. I was therefore pleased, when the League Cup draw had them at home to Ipswich, although I didn't actually confirm until I looked online until the next morning, due to the farcical nature of the draw. I was a bit worried that there would be some decent FA Cup replays that I'd miss out on, but in the end, I got to Littlehampton Town on Sunday anyway and there were only a few games at new grounds that I'd have been able to get to. Though the match day price of £20 was reasonable by Palace standards, it was still amongst the most expensive ties of the round, especially for what was effectively a reserve team game. I selected my ticket in the Holmesdale End behind the goal, as it was the only one without supporting pillars and it should, in theory, give a decent view of the action. 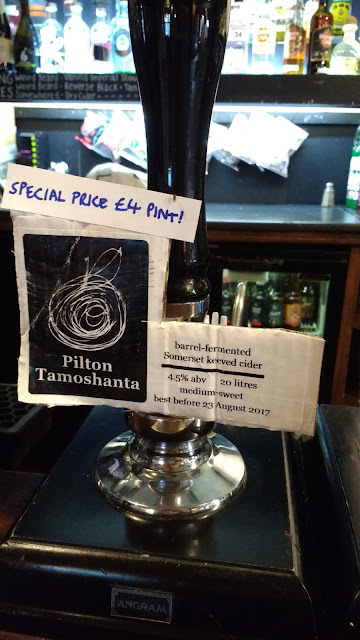 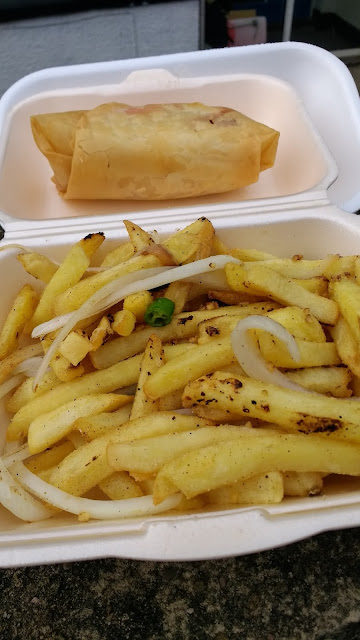 It was my usual Tuesday off on the day of the game, and as per usual, I walked down town before meeting my day for a lift back. I had an unexpected bonus of getting a ticket for the England v Slovakia game for £11.50, thanks to the HotUKDeals newsletter. I'm no fan of playing games at a half-empty Wembley Stadium, but when it's England, it's a different matter. I've not seen them live for 10 years and it will be a good start to my fortnight off work. After leaving just before 2, I got to Amersham Station around 2.20 I had to wait over 20 minutes for the next train, which is pretty poor by London standards. Eventually, I was on my way, changing at London Marylebone and then Baker Street to get to London Bridge. It was at this point that I realized I'd left my headphones at home as I'd had them on charge before I left. I eventually got to Borough Market, enjoying a couple of drinks at the excellent cider stall, plus a further one at The Miller pub near Guys Hospital. That was my end of my drinking with the time approaching 5 pm and with all the stalls at Borough Market keen on packing up and going home, I was hoping for a decent Chinese near Palace's ground. I got a train from London Bridge to Norwood Junction which conveniently didn't involve any changes and was pretty quiet for the rush hour. I found my way to a Chinese takeaway, Yao's Oriental Delight, where I had salt & chilli chips along with a pancake roll. It was a bit of a mixed bag with the chips nice but the pancake roll wasn't fully cooked and I ended up throwing some of it away. 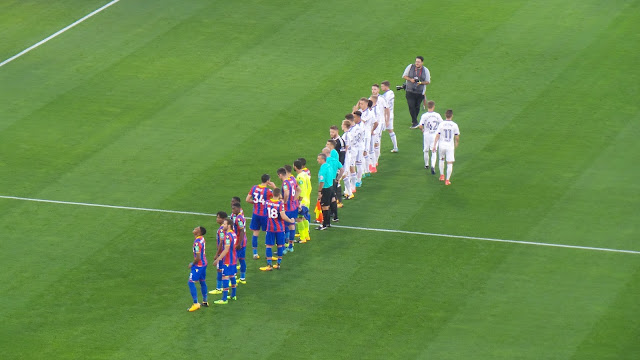 I went into the ground just before 7, past the overpriced tea bar and into my seat which gave a good view of the action, to be honest. Shame about the game then, the first half was a non-event, with both sides appearing content to let the other do the work. Palace did go for it more in the second half and they got their reward on 76 minutes when James McArthur opened the scoring with a very nice strike. He got a second around five minutes from time and despite Bersant Celina pulling a last minute goal for Ipswich, the game was only going to go one way. On reflection, apart from a short spell, it had been a very poor game. Ipswich's team of youngsters battled hard but didn't offer much going forward. Palace were especially disappointing - despite having a number of big names playing, they found Ipswich hard to break down and on this showing, Frank De Boer looks a justified 9-4 favourite for the first Premiership manager to be sacked, even though he has only just been appointed. The Palace fans deserve credit, despite the crowd of under 10,000 and the poor fare on the pitch, they kept singing all night. 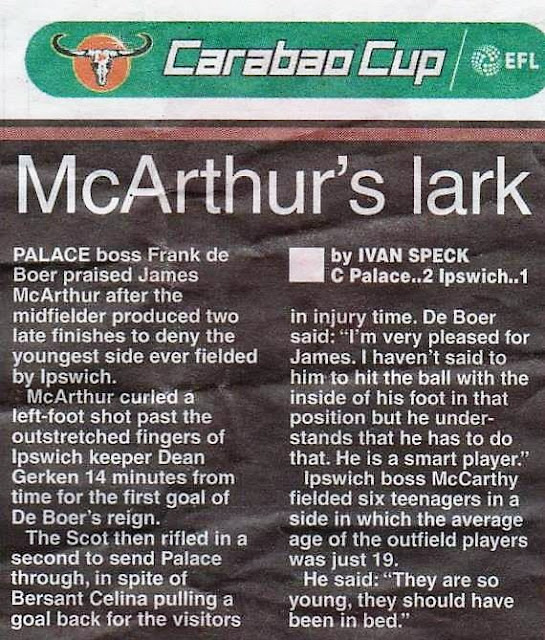 After the game, my first aim was to get a picture of the stand that I had watched the game from. This was accomplished fairly easily by nipping around the other side, going up into the nearest side stand and getting a picture from there. With that done I made my way to Selhurst station, waiting just under 10 minutes to get the 21:50 train back to London Bridge. On the way, I encountered a scarf seller trying to flog his match day scarves for a fiver, though unsurprisingly, there were not any takers for a low key game. I got a train from Selhurst to London Victoria where I purchased a meal deal at WH Smith as I was pretty peckish and thirsty by that point. From there, there were a couple of changes in central London to get to Marylebone for my final train home. I caught the 22:57 train back to Amersham and after my drive home, I got in shortly before midnight. After staying up for a while I went to bed around half an hour later. With my usual 4 am wake up time, I was tired the next day and needed my customary afternoon sleep. Next up for me is potentially Aveley for me on Friday, though this depends on other hoppers. If not, it will most likely be something on the train again on Saturday with Bridon Ropes, Croydon, Kent Football United and Ramsgate being the most likely options. 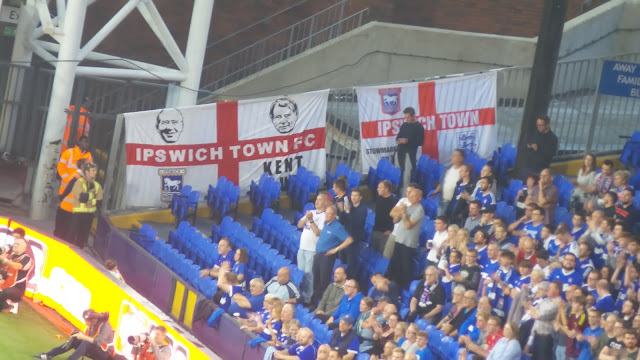 SELHURST PARK is one of the older grounds in the Premiership and unlike most of the modern bowl arenas, this has four separate stands. Both end stands have unobstructed views with the Holmesdale Stand being-two tiered and the Whitehouse Lane stand being a smaller stand with a Sainsbury's built into the back of it. The two side stands have supporting pillars, but they don't look like they get in the way too much. Part (or all of) the Arthur Wait Stand (named after a former chairman) whilst home fans get the Main Stand which has some interesting looking floodlights on the top of it.

Food and drink in the ground is expensive and I don't recall seeing an official club bar. The Flora Sandes is probably your best bet, this is your average Wetherspoons with its associated good value. There are plenty of takeaways to suit every taste and a number of other pubs too so you won't go hungry or thirsty.

1: Ground facilities & condition (for the level)
Bit of character, but not one of the better in the Premiership (6)

2: Area around the ground (parking, food/drink, public transport)
Lots of choice of takeaways, but not the best for parking. Three train stations nearby  (6)

4: Value for money
Poor compared to others in this cup, especially for what was a reserves game (3)

5: Social Media & Website
Interactive and informative, if a little impersonal (7)

7: Game entertainment
Only worth watching for 10 minutes (3) 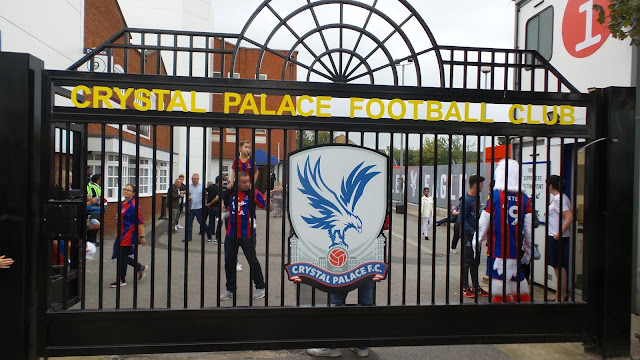 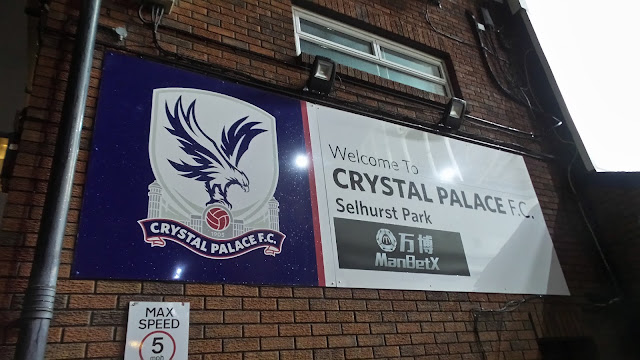 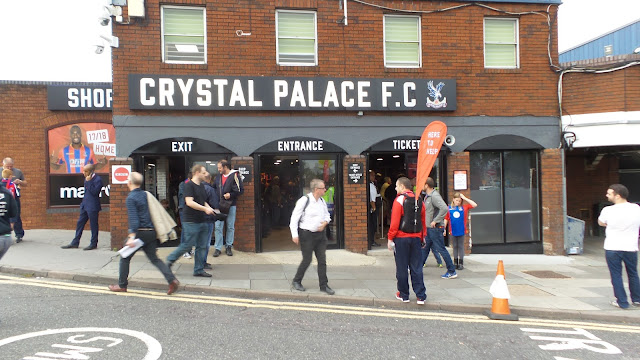 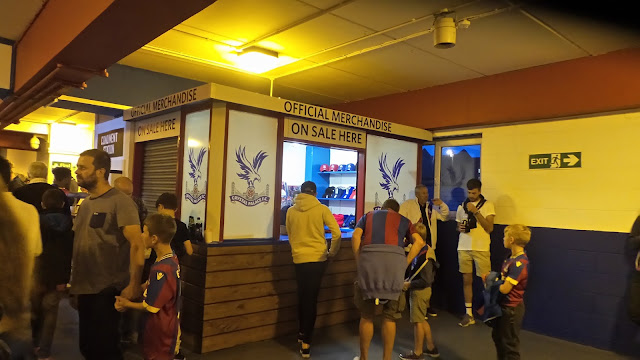 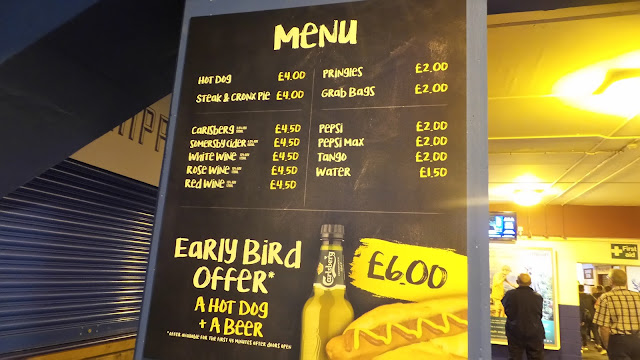 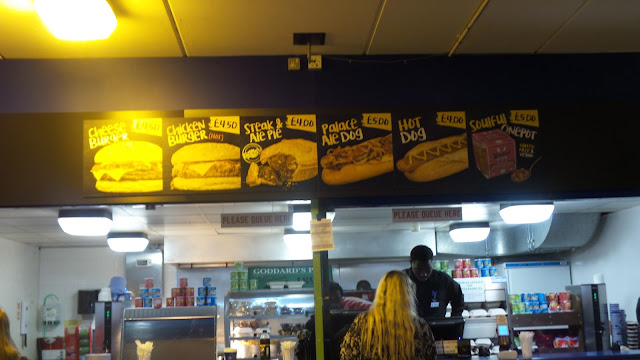 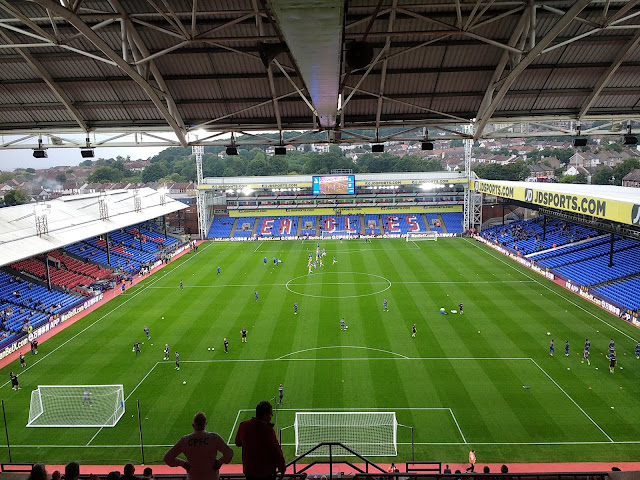 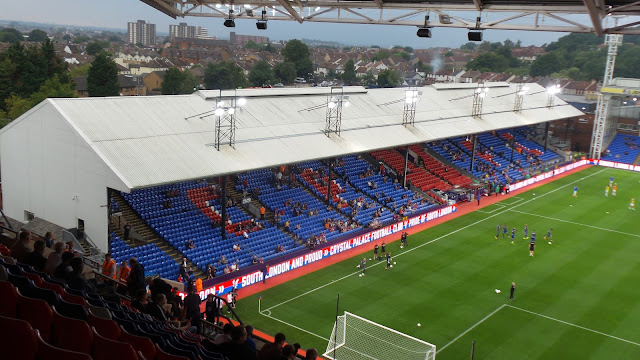 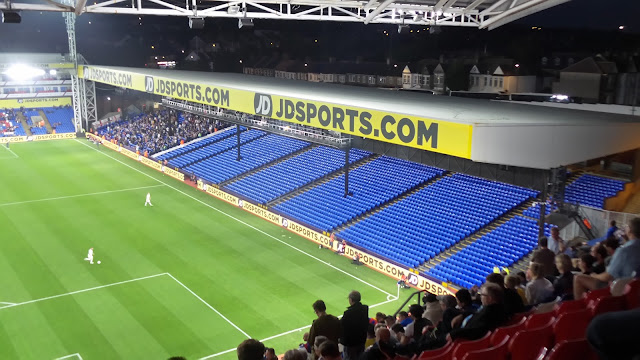 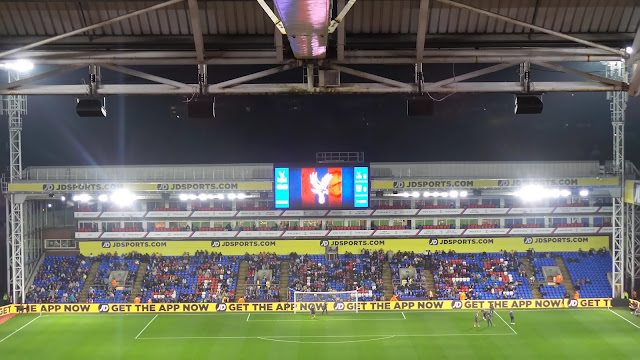 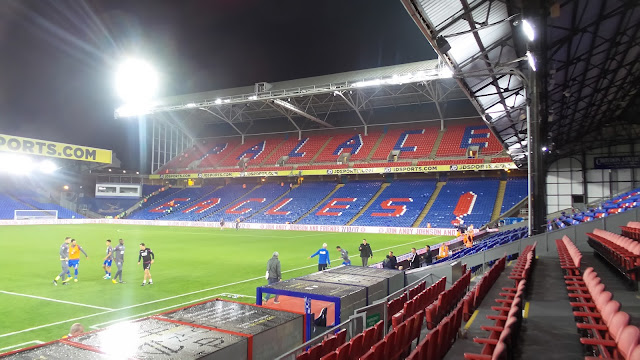 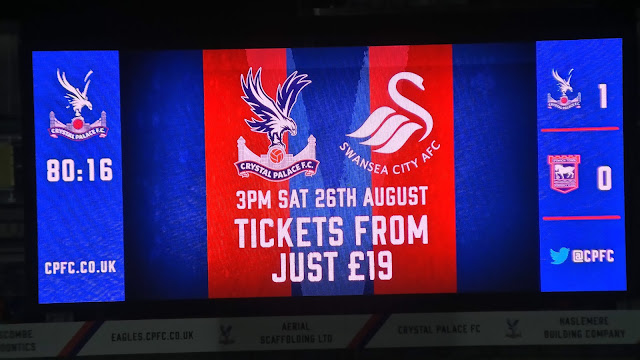 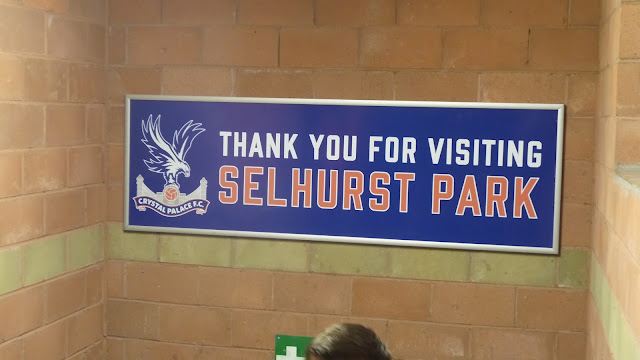