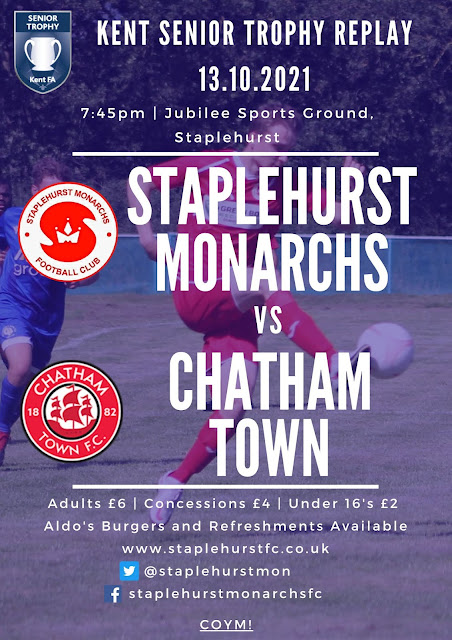 STAPLEHURST MONARCHS - A BRIEF HISTORY
The club was established in 1893 but played in local leagues for much of its history. Originally known as Staplehurst, the Monarchs suffix was added in 2005. The date they joined the Kent County League is unclear but they spent 2002/03 in Division 3 West, finishing 7th before being moved to Division 2 East. They were champions in 2006, moving up to Division 1 East. Following two 4th place finishes in 2010 & 2011, Staplehurst Monarchs moved up to the Premier Division. They were champions in 2019 but remained in the league for the seasons that were abandoned due to Covid restrictions. They were leading the league in the first season and that was good enough to see them promoted to the Southern Counties East Division 1 this summer. They've managed to remain competitive but sit just outside of the relegation zone prior to my visit.

Staplehurst Monarchs United made their debut in the FA Vase this season, getting off to a winning start with a 3-2 win against Sporting Bengal United. They then went on to win 2-1 at Hailsham Town and now face a strip to Stansfeld for a 1st Round game on 23rd October. The village of Staplehurst has a population of 6,000 and is situated around 9 miles from Maidstone. In the early 19th century, Staplehurst was often visited by invalids seeking recuperation, especially those from Romney Marsh and East Kent, apparently attracted by the purity of the air. The Staplehurst rail crash, in 1865, is a significant event in the history of the village. Charles Dickens, who was on board, was uninjured but affected by the incident for the rest of his life. Ten people were killed and forty injured in a derailment caused by botched engineering works. Staplehurst won Kent village of the year in 2003 and is also home to cricket and tennis clubs. Famous people from the village include the comedian and TV presenter Harry Hill. 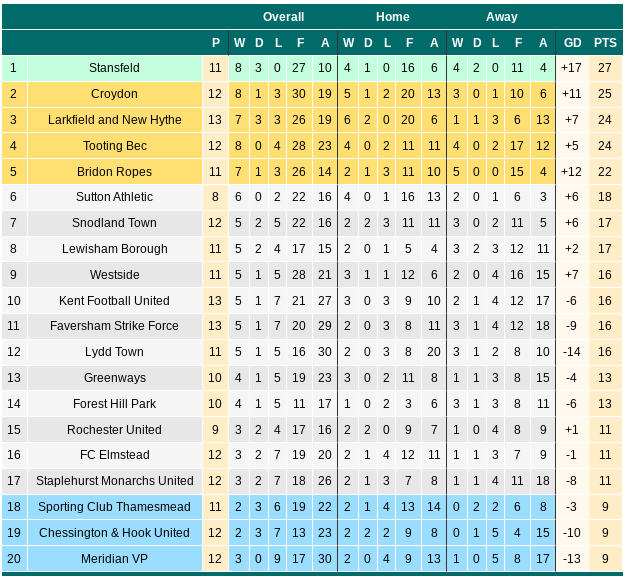 MY VISIT
I was keen to do a game on the Wednesday of my week off, but choices were rather limited. My usual Wednesday hopping partner Chris was in Devon and Anwar didn't have the budget to go hopping two nights in a row. I did ask Colin but as ever, he wasn't available and so I planned as if on my own. Going via train worked out cheaper for once and I checked and double-checked that I could get back after if needed and although it would be a later night, I could spend the time travelling typing my blog. There was also the possibility of an afternoon game and a day out in London with the change of train in London happening at London Bridge which had plenty around it to keep me occupied for a couple of hours. I did consider going to Hanworth Villa for a 1 PM kick-off in the Conference Youth Alliance but on the train, it was a right rotten journey from where I was. I had the option of going from either High Wycombe or Amersham but in the end, I reverted to going by car, even though it would be pricier. I'd be most likely be catching the last train of the night and if there was any problem with it, I would be stranded in Kent. 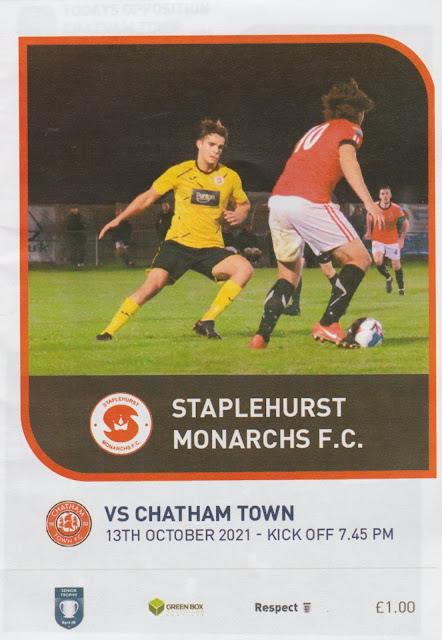 I'd had a late night after my game at Boston the previous night and had a good nights sleep. Therefore, I didn't wake up until 11. I wanted to go to town and so walked down and back an hour later after having a bath and getting dressed. I'd been hoping to pick up a new digital camera as I find my current one too bulky, but no such luck. I did get some nice bits for lunch from the Lidl bakery though as well as some Irn Bru. I was back around 3.40 and had an hour to kill so I got on with this blog and watch TV. I left at 4.45 and stopped to get the petrol I needed. It was a few pence a litre pricier than in town but the detour was not worth it. It was a lot cheaper than I'd seen along my route too. The journey down was decent and I was at Staplehurst by 6.50. I headed for the local Chinese called Zen Wok and wanting something that wasn't chips for once, ordered a Singapore Chow Mein for £5.50. I took my dinner back to the ground, parked up and went in. It was £6 entry and £1 for a programme. I learned that the original game had been abandoned due to a Staplehurst player breaking his leg and that the gate money had been donated to him to help him out financially, a really nice touch. 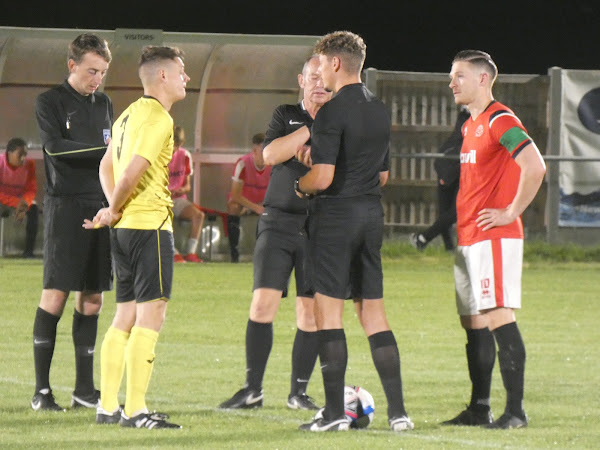 Staplehurst Monarchs United were in mixed form. Since their win at Hailsham in the FA Vase, they'd also beaten Rochester United 2-1. They'd drawn 2-2 a Chessington & Hook United but had lost 2-1 to Larkfield and New Hythe and in their latest game, 1-0 to Snodland Town. Chatham Town meanwhile were in sparkling form. They'd suffered a 5-0 defeat to Abbey Rangers in the FA Cup, but since then, they'd won all five games. They'd beaten Holmesdale 3-0, Kennington 3-1 and Tunbridge Wells 5-1. On their travels, they'd won 1-0 at Fisher and 5-1 at Lordswood. Chatham were dominant early on and they had a goal disallowed on 10 minutes. A cross from the right was headed home, but it was ruled offside. Staplehurst took the lead on 20 minutes, Keiran Pallett taking advantage of a mix up in the Chatham defence. The visitors were still dominant and it took a good save by the home keeper to preserve his teams lead. It lasted until 38 minutes, a cross from the left was poked home through a crowd of players by Andy Pugh. The floodgates opened and on 40 minutes, Pugh and Chatham had their second, this time getting on the end of a cross from the right. Jude Watts shot from the edge of the area found the bottom corner on 42 minutes. A brace from Jack Richards including a shot that went straight through the keeper made it 5-1 to the visitors at the break. The second half was a bit more even and it wasn't until 65 minutes that Watts made it 6-1, finishing from just inside the area. On 69 minutes Kian Garlinge finished from point-blank range to make it 7-1. 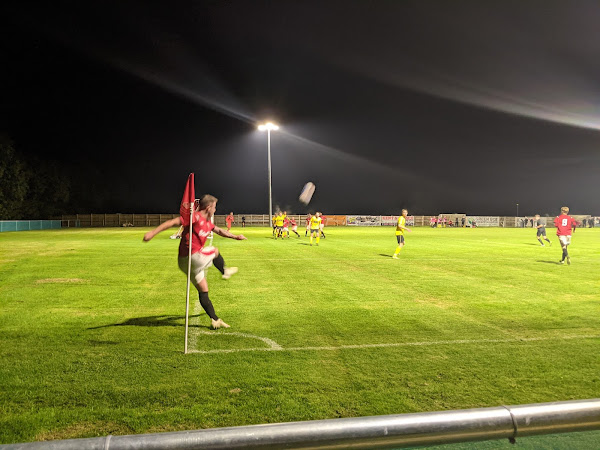 Chatham had the better of the rest of the game and it was a deserved victory for them but off the field, it was a decent night for Staplehurst. The attendance was 151, including a fair few travelling fans. I left at 9.40, listening to Greatest Hits Radio on the way home and getting the guess the year competition right again. Mainly from the news clues though, rather than the music. There were of course some closures on the way home, the M25 between junctions 9 & 10 was the main one. It added 20 minutes to the journey and a few miles as I went through Hampton Court and Esher with some 20MPH zones which were really unpleasant to drive in. I was back home by 11.40 and I spent the rest of the evening typing my blog and watching TV. Next up for me is a weekend in the north east and a trip to Durham Corinthians on Friday night. 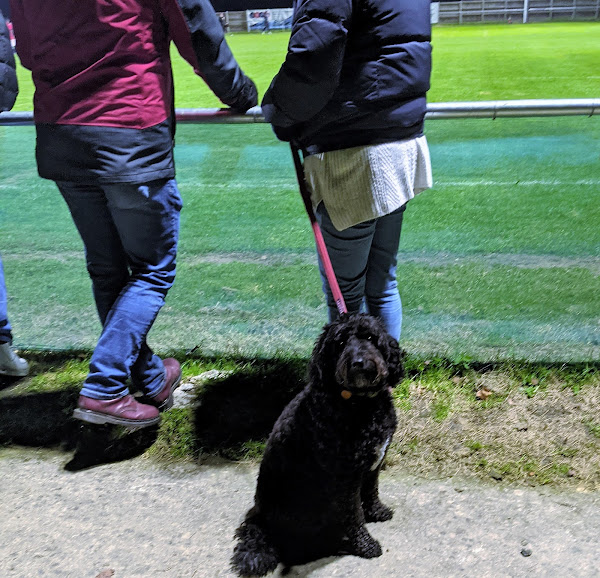 THE GROUND
JUBILEE FIELD is a fairly basic setup, as you would expect from a newly promoted team. The standard metal stands are in place, holding around 50 seating and 50 standing. Only two sides of the ground are available to fans but the facilities are new and well maintained. There's a tea bar that does burgers drinks and snacks and a bar selling booze but I didn't visit the latter. There's a decent-sized car park with good sized spaces, otherwise, the train station is a mile away or you can get a bus from Maidstone. In the village is a range of takeaways with Zen Wok being decent. 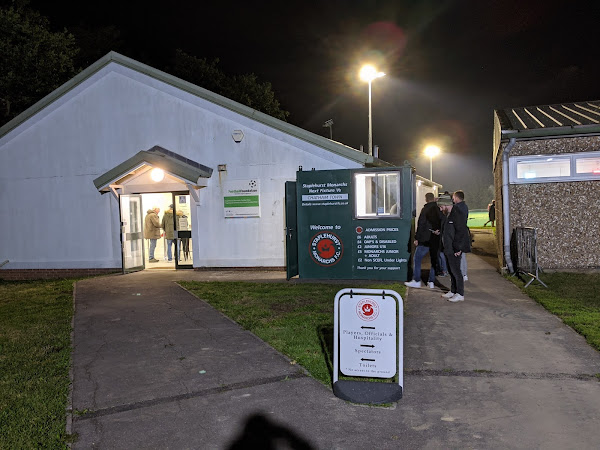 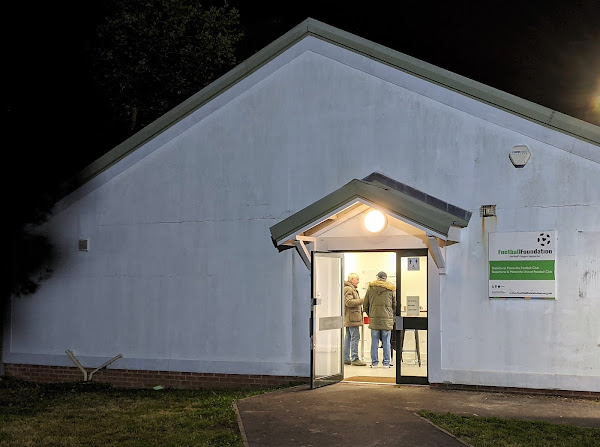 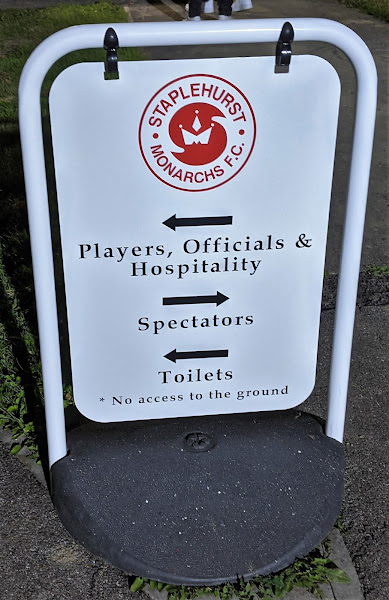 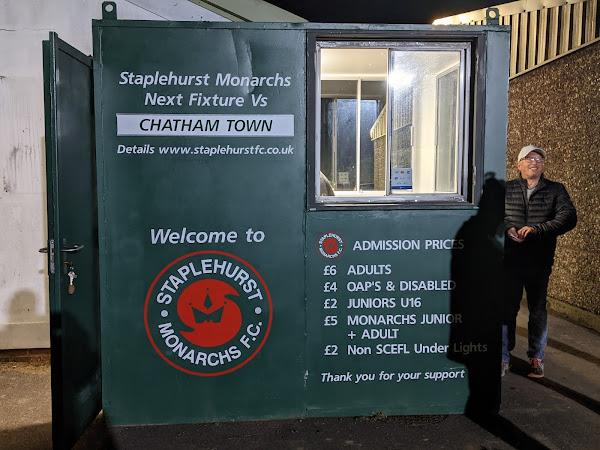 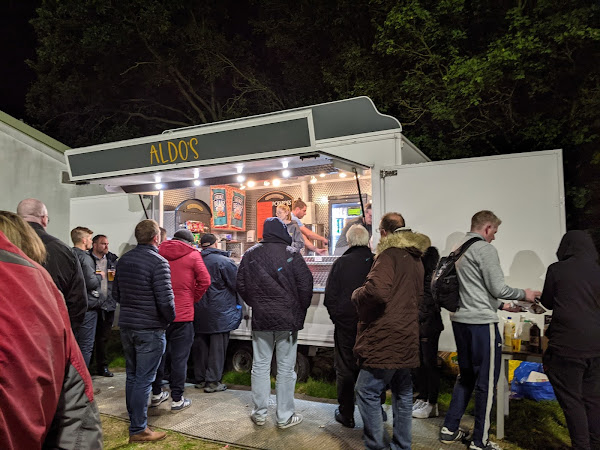 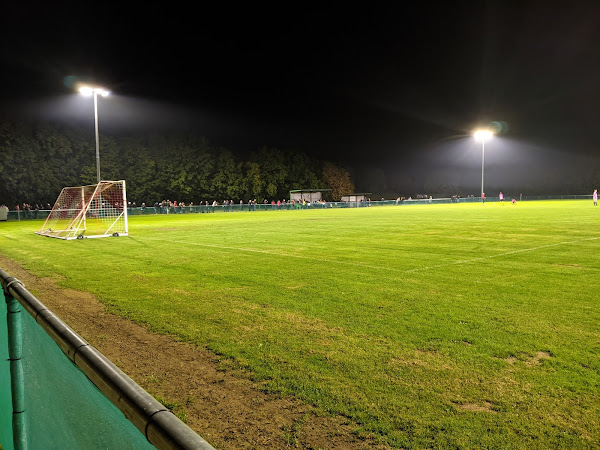 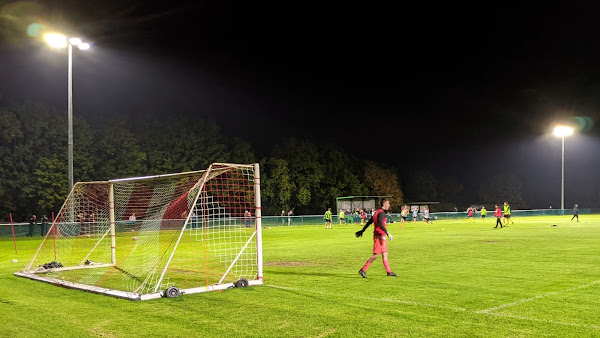 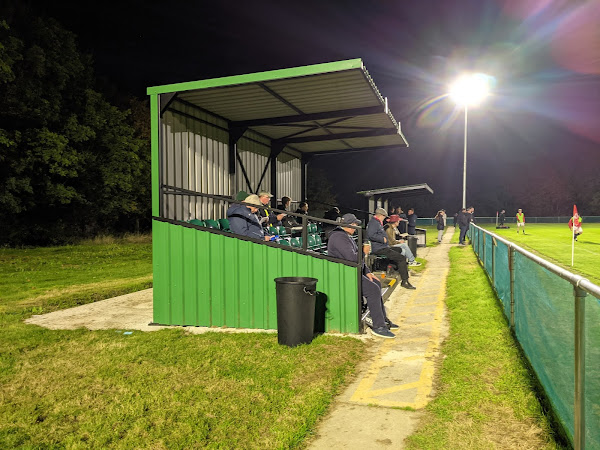 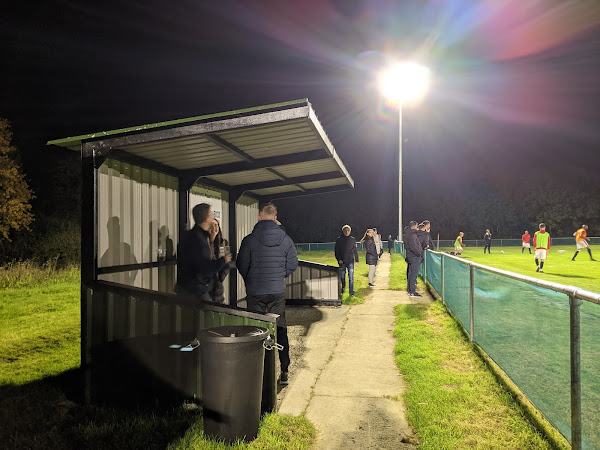 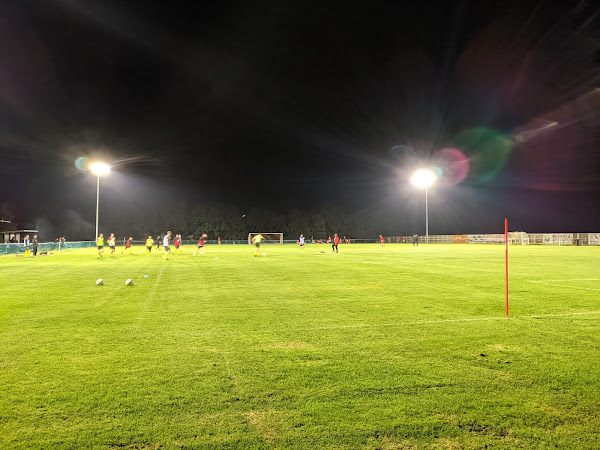 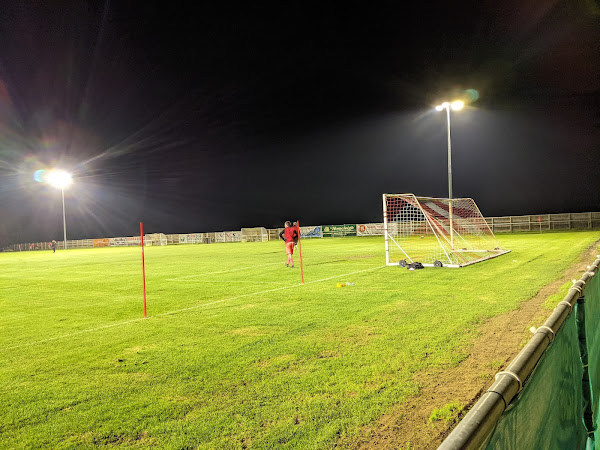 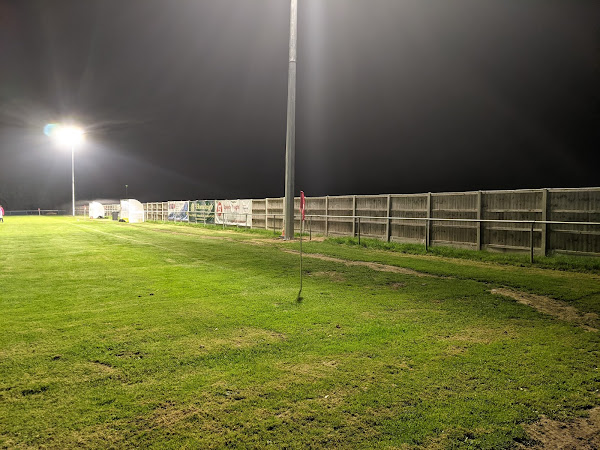 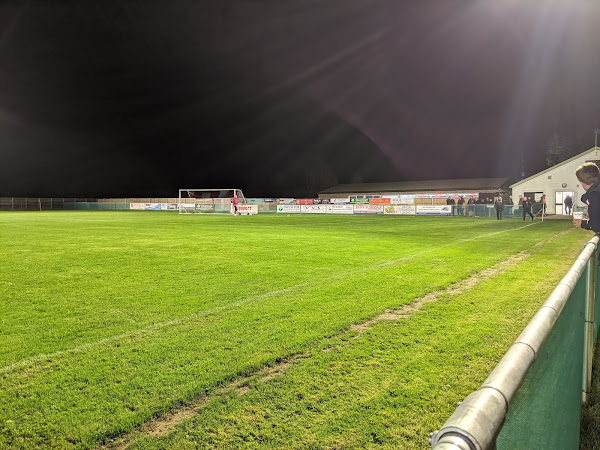