Bonnymead Park
Recreation Road
Amesbury
Salisbury
Wiltshire
SP4 7BB
Official Website
Twitter
Ground Number: 1013
Tuesday 19th October 2021
Amesbury Town 0-4 Shaftesbury
Wessex Premier
AMESBURY TOWN FC - A BRIEF HISTORY
The club was established in 1904 as Amesbury FC and they would use that name up until 1984 when the 'Town' suffix was added. They spent their early years in the Salisbury & District League which they won in 1956. Following this triumph, they joined the Wiltshire League, starting out in Division 1.  They finished 3rd in 1959 but left the league, not returning until 1972.  The club struggled at first but would win the league in 1975. The league would later merge with the Wiltshire Combination to become the Wiltshire County League. Amesbury Town were champions here in 1980, 1991 & 1992. In 1994, the club made the step up to the Western League Division 1 in 1994, spending three seasons there before they left the league in 1997. A season back in the Salisbury & District League followed where the club finished as runners-up. They joined the Hampshire League in 1998, following 4th in Division 3. Following league reorganisation, the club was placed in the Premier Division and they won the title in 2000. The club joined the Wessex League in 2004, joining its newly formed second tier. In 2016, Amesbury Town followed as runners-up to Portland United and won promotion to the Premier Division. They struggled at this level but their 19th place finish at step 5 in 2017 remains the best ever in the club's history. The following season, they finished bottom and were relegated back to Division 1. They bounced back immediately though, finishing as runners-up to AFC Stoneham in 2019. The last two seasons were abandoned due to Covid but the club again struggled and were bottom on both occasions. This season has seen a slight improvement with them sitting second bottom at the time of my visit.
Amesbury Town have never pulled up any trees in the FA Cup, progressing to the Preliminary Round in just two of their ten seasons in the competition. They've fared better in the FA Vase, reaching the 3rd Round in 1979. That season, they beat Stonehouse, Bristol Manor Farm and Ottery St Mary before a defeat to Hungerford Town who would go on to reach the semi-finals. In terms of local cups, the Wiltshire Senior Cup was won in 1984 and 1994. Amesbury is in Wiltshire, 7 miles from Salisbury and has a population of around 11,000. It is known for the prehistoric monument of Stonehenge which is within the parish. The town is claimed to be the oldest occupied settlement in Great Britain, having been first settled around 8820 BC. 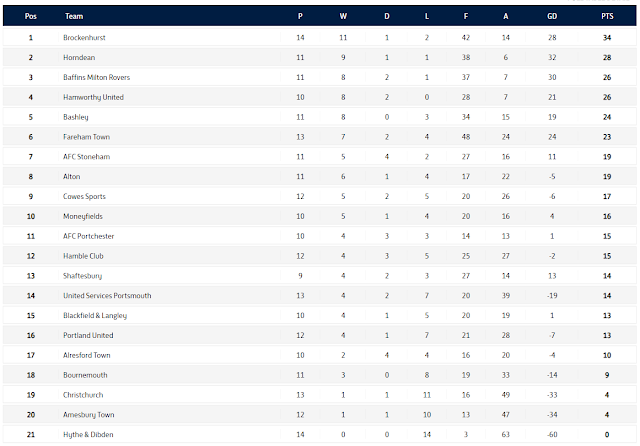 MY VISIT
Following a busy extended weekend in the North East, it was back to hopping from home. I'd arranged with fellow hopper Anwar to go to Kenilworth Sporting on Monday but on Tuesday morning, he messaged me to say that he couldn't make it as he was ill. Another plan was needed and with another fellow hopper Colin keen to do a game, I tried to find a game to include him. Options for a new ground were sparse but it would be nice to have company. Time would be tight though and so I selected the closest which was Amesbury Town v Shaftesbury. There were a couple of backups around Southampton should they be needed. Time would be tight though and we would more than likely end up having to eat at the ground. This was all arranged after I'd grabbed a good nights sleep, needed after three nights away where I only got a few hours a night. I woke up at 9.30 and had a shower and breakfast. I wanted to go down town, I'd spotted a mini HiFi system that I'd wanted in the British Heart Foundation shop last week and thought I'd go down and see if it was still there. 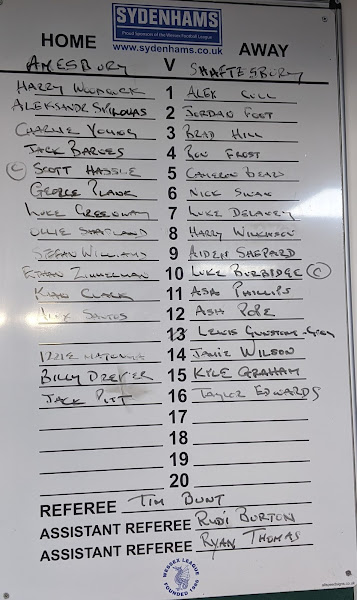 I left at 11, walked down and got the few things I needed from Aldi. I then headed to the shop, happily, it was still there and was pretty decent for a tenner. It helped out a charity too and would provide an extra couple of speakers for my TV. I was back by 2 and ordered the parts for it online that I needed - an aerial and a converter to allow me to connect it to my TV which set me back another £15. I also hadn't done my research for tonight's blog, so spent the afternoon doing that whilst watching TV whilst doing that. I left at 5.20 and was in our pre-arranged meeting place to meet Colin at 5.45. The journey down was perfect for once, the only delay was a few minutes getting into the M25 due to an issue going the opposite way around. It was helped that we got off before we hit the troublesome Heathrow section. The only negative was that it was absolutely tipping it down. We were at the ground by 7.25 and it was still raining. Entry was £6 and an excellent programme was £1. Colin also got a roll and some crisps from the club building but with it only being cold food, I made do with what I'd bought with me. It seemed the visitors were keen to get started, as they were out a good five minutes before the officials and hosts. 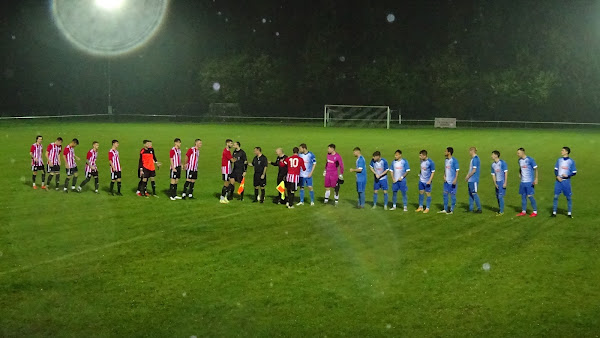 Amesbury were in awful form and had lost their last seven games. Their last point came on 4th September when they drew 2-2 at Cowes Sports and their only win came on 21st August when they beat Christchurch 2-1. The two sides had met twice so far this season with Shaftesbury winning the return league fixture 9-2 as well as winning 4-1 at Amesbury in the FA Cup. The visitors were in reasonable form. Though they had lost 3-0 at Baffins Milton Rovers in their last game and at 2-3 home to Alresford, they'd won 3 of their last 5. These included a 9-0 win over Christchurch, 3-1 at Blackfield & Langley and 4-2 against Andover Town. It was an even game at first, but gradually Shaftesbury took control, forcing the Amesbury keeper into a good save with his legs. They look the lead on 30 minutes, a shot from the edge of the area by Asa Thomas hitting the post on its way in.  The visitors also hit the bar before they doubled their lead on 68 minutes, Luke Burbidge bundling home. A couple of minutes later. it was 3-0, a well-worked move ending with Ashley Pope finishing from ten yards. On 78 minutes it was 4-0, Kyle Graham advancing down the left before cutting in and slotting the ball home. 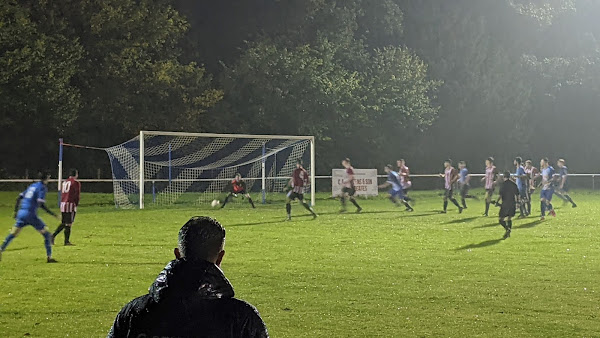 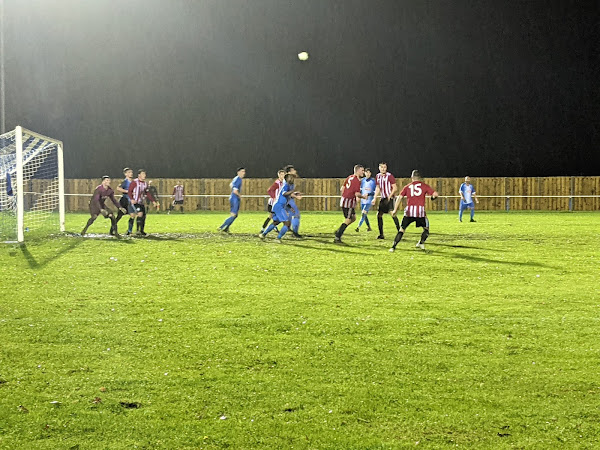 It had been a decent game with Amesbury competitive in the first half before Shaftesbury completely controlled the second. There were 40 in attendance, including a fair few from Shaftesbury. We left around 9.45, listening to the roundup on BBC Three Counties Radio. Wycombe had gained an excellent point up at Rotherham in a 0-0 draw. Once that was finished, we listened to Greatest Hits Radio with me dropping Colin off at 11.20. I needed petrol so I popped to Tesco but for the second time in recent times, the 24 Hour Pay at Pum station was all closed up. Instead, I had to pay slightly more at the garage in Holmer Green but it was worth it for the convenience. I was in by 11.45 and stayed up for an hour and a half doing my blog and watching YouTube. 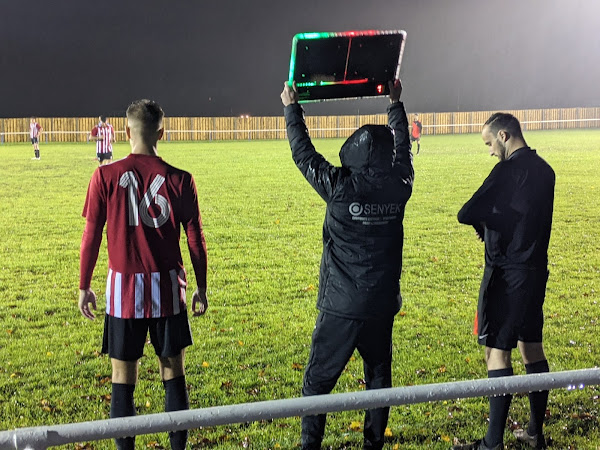 THE GROUND
BONNYMEAD PARK is a nice ground for the level and happily not a metal stand in sight. The main seated area consists of benches and could probably hold around 200. There is also an area behind the goal next to the clubhouse which has an overhang, this could hold another 30. Aside from that, the ground is open hard standing.
There's a clubhouse, which offers a selection of drinks and snacks as well as rolls but no hot food. For a greater selection, the town is around 15 minutes walk away and has a wide selection of places. The car parking is plentiful but I'm not sure about public transport links. Pictures are below, a couple of them are from September 2009 when I called in on my way down to Salisbury. 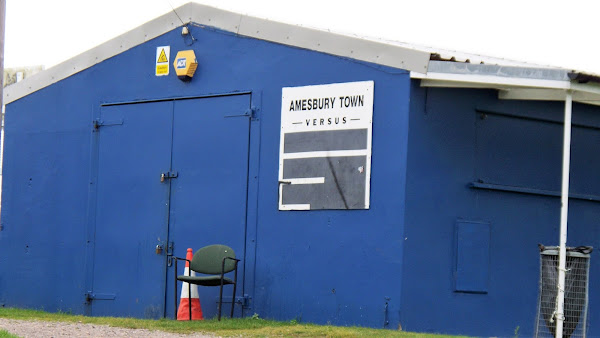 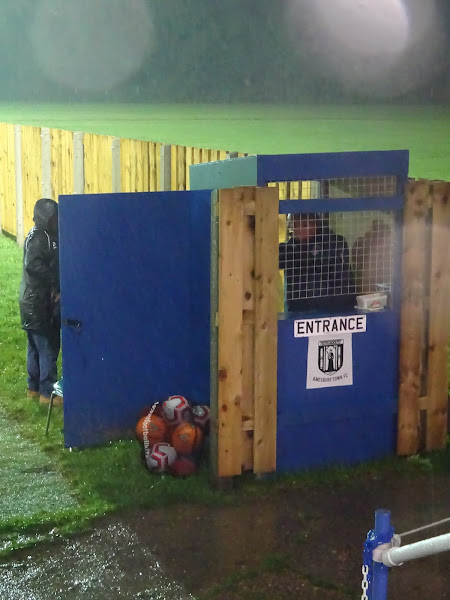 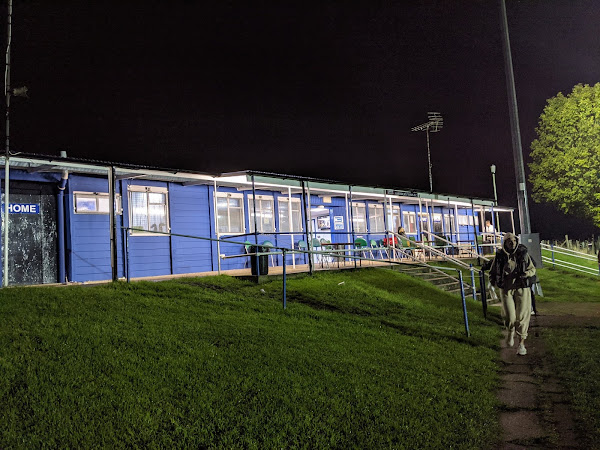 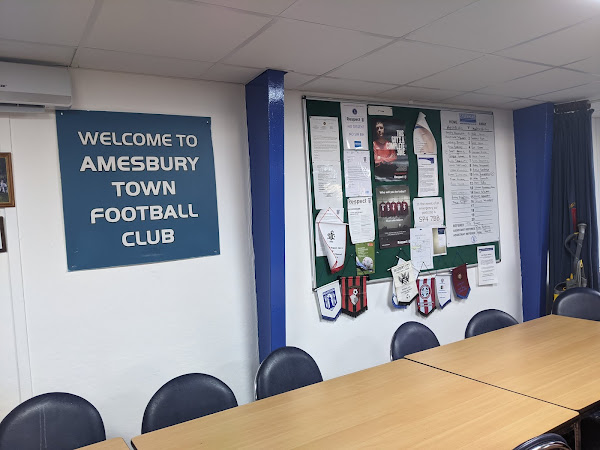 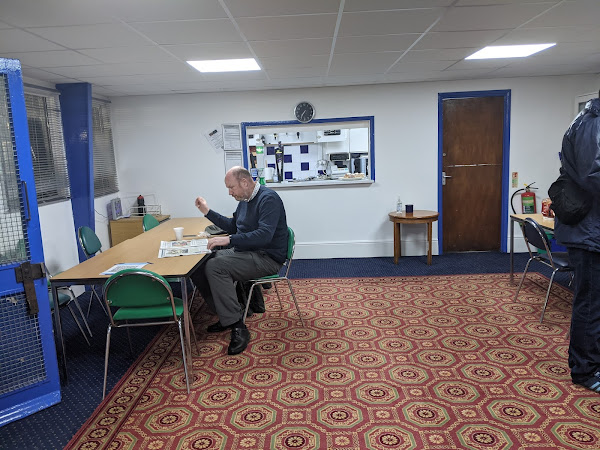 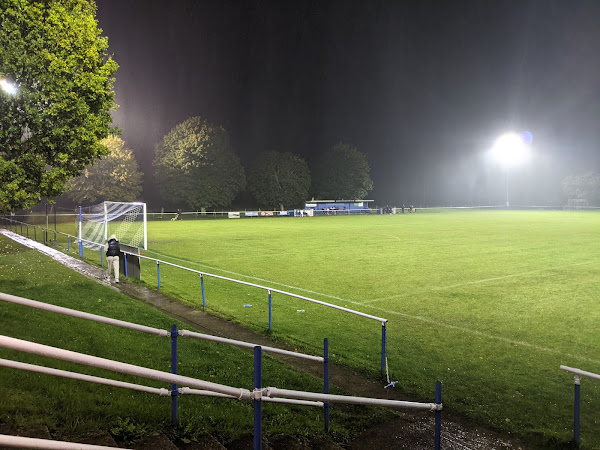 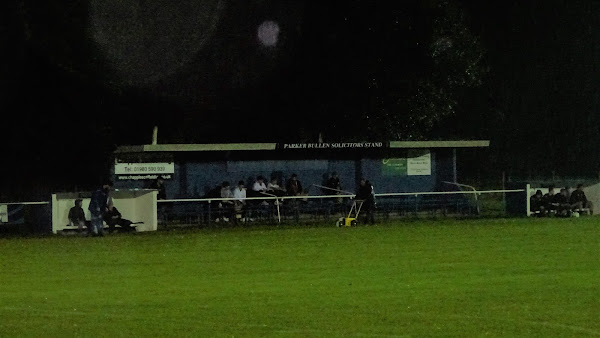 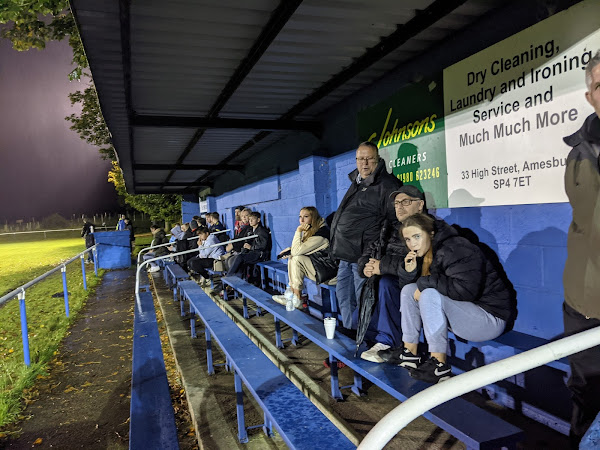 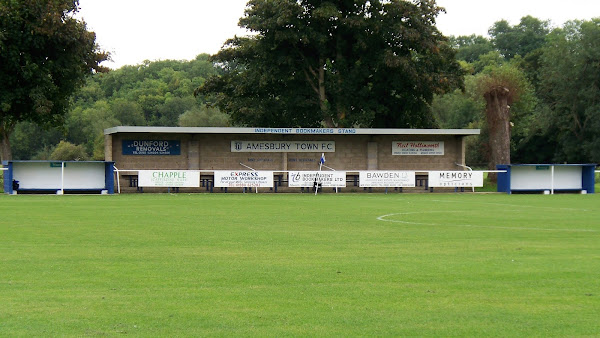 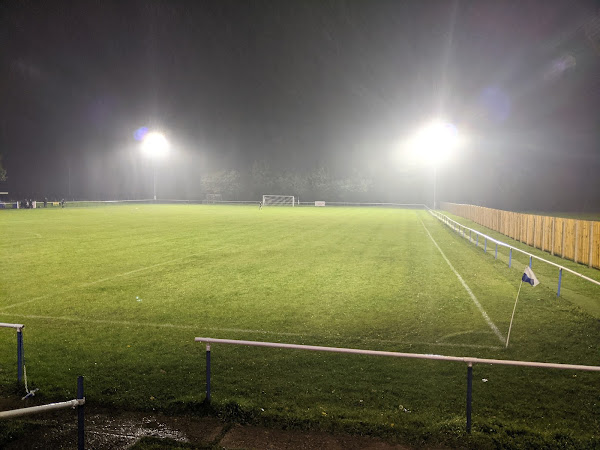 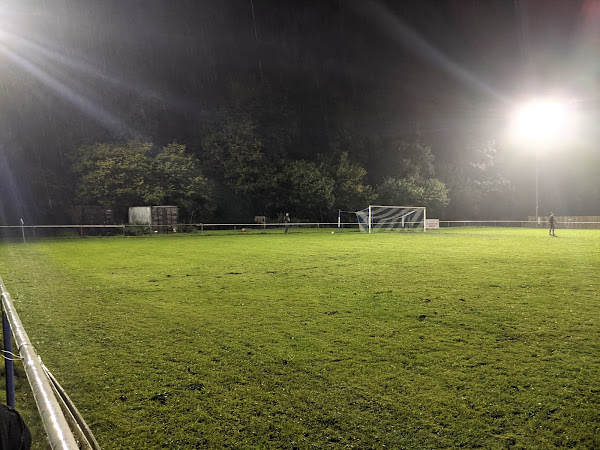 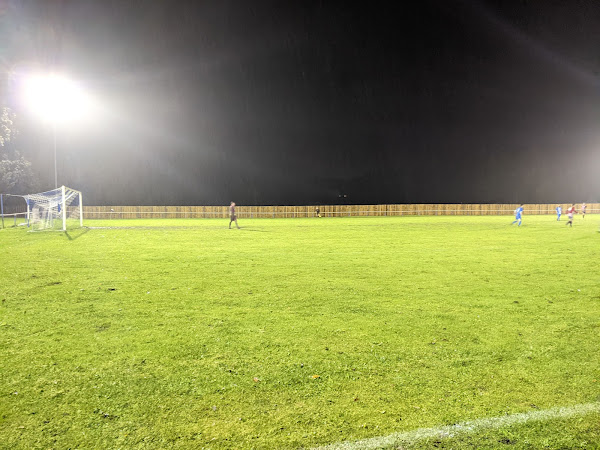 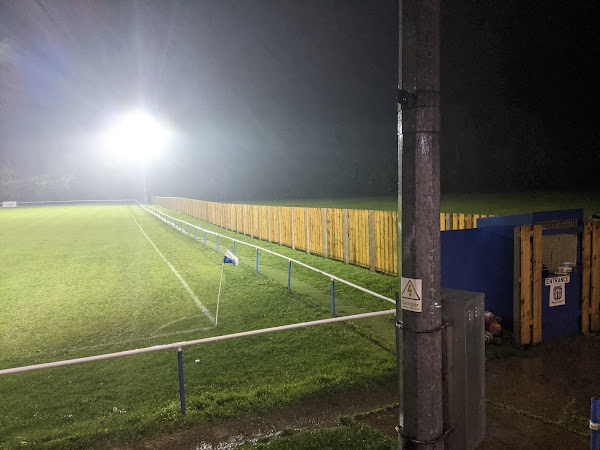 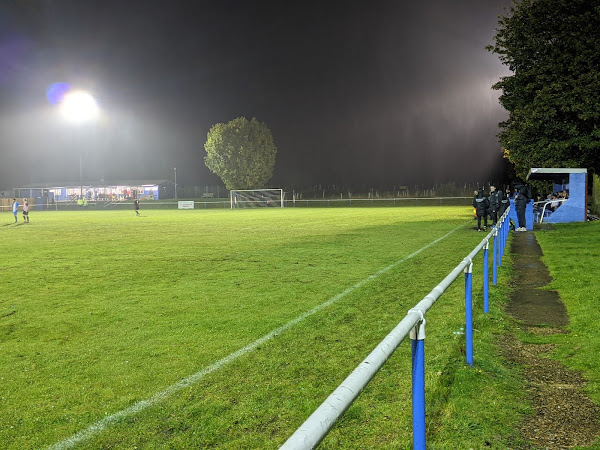 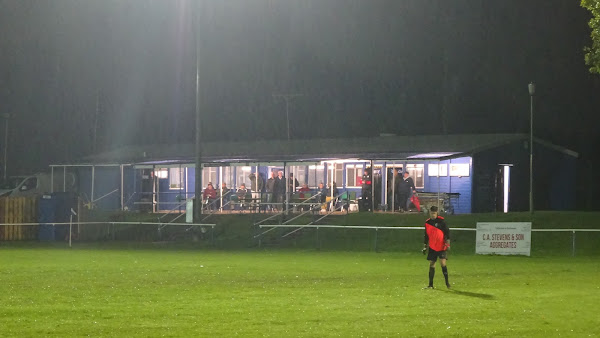