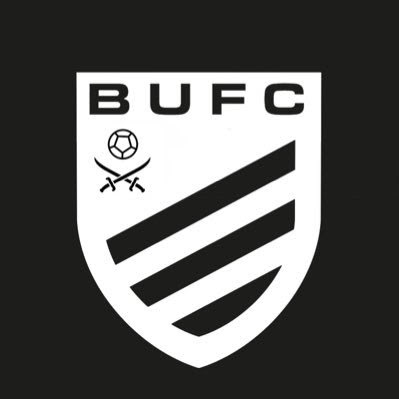 Bexhill United FC
The Polegrove
Brockley Road
Bexhill On Sea
East Sussex
TN39 3DP
Official Website
Twitter
Ground Number: 1018
Saturday 30th October 2021
Bexhill United 1-1 AFC Uckfield Town
Southern Combination Premier
BEXHILL UNITED FC - A BRIEF HISTORY
The club was established in 2002 following a merger between Bexhill Town and Bexhill Amateur Athletic Club although the latter reformed on their own four years later. Bexhill Town themselves were formed as a part of a merger - this time in 1927 between Bexhill United and Bexhill Town and were originally known as Bexhill FC. They've played in the Sussex County League for pretty much all of their history, winning it for the first time in 1957 and finishing as runners-up to Arundel the following season. The title was won again in 1967 and 1968 with them finishing runners-up in 1969 to Chichester City by virtue of a slightly inferior goal ratio. They'd remain in the top tier until 1981 but the early 1980s saw some real struggle with them finishing bottom of Division 1 in 1981 and bottom of Division 2 in 1985. They'd bounce back as runners up in Division 3 to Seaford Town in 1986 and would be back in Division 1 as Division 2 champions in 1990. Bexhill never really pulled up any trees in the top tier and by 1994, they were back in Division 2 and just as last time, could not arrest the slide, going down to Division 3 in 1997. This time they would stay in the bottom tier for longer, finishing a record low of 13th in Division 3 in 2002. The years between 2005 and 2010 saw them bouncing between Division 2 and Division 3, with two runners-up spots in this time. Since 2010, they had been in what is now called the Southern Combination Division 1 which sits at step 6 of the non-league pyramid. Last season was abandoned due to the pandemic but following an excellent showing, winning 10 and drawing 1 game. They are now back at the level that they last played at in 1994 and sit 5th in the table.
In the FA Cup, Bexhill's best progress has been to the 2nd Qualifying Round which they last reached in 1972, losing to Sittingbourne in a replay. Their best run in the FA Vase came during the 1976/77 season with them beating Horley Town, Deal Town, Faversham Town and Eastbourne United before a 3-2 defeat at Epping Town in the 4th Round. Local cup honours include the John O'Hara League Cup in  1956, the Sussex County Division 3 Cup in 2000 & 2008, the Sussex Royal Ulster Rifles Cup in 1958 and 1974, the Hastings Senior Cup in 2012 and the Sussex Intermediate Cup in 2008. The club is based in Bexhill on Sea, not far from Hastings and has a population of around 43,000. The town was the location for the UK's first-ever motor race in 1902 and draws much of its economy from tourism, with there being several pieces of architecture. Other local clubs in the area include Sidley United and Little Common whilst rugby is played at Hastings and Bexhill Rugby Club. Famous former residents include TV inventor John Logie-Baird, celebrity chef Fanny Craddock, writer Spike Milligan, actor Andrew Sachs and actress Gwyneth Strong. 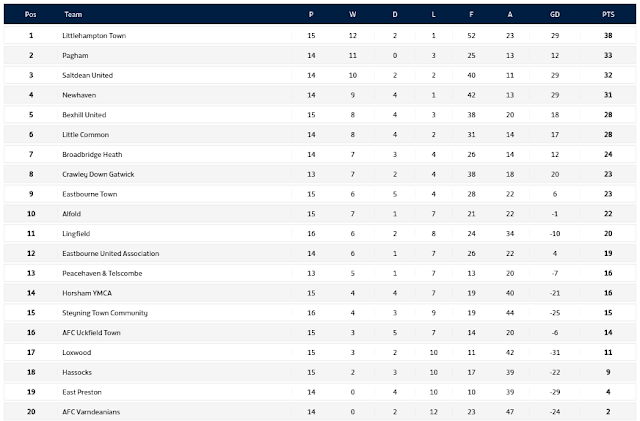 MY VISIT
For this Saturday, I had a ton of options to choose from. These were eventually whittled down to ten choices and included a revisit to Fleetwood Town for Wycombe's game up there and a local trip to 61FC Luton for the completion of the Spartan South Midlands D2. However, I'd put a fair few miles on my car during the week and fancied a day out on the train. I looked for the best bang for my buck, as well as places with decent pubs and it came down to two options - Worthing United and Bexhill United. The latter was 20 miles extra each way by car and only a fraction more cost-wise. The fare of £31.65 was already reasonable compared to driving costs - including servicing - of £40 - £45 what with the way petrol prices are going. However, I managed to knock another fiver off by using split ticketing, bringing the fare down to £26.20 with my Network Railcard. This practice is above board, but it's a shame you have to do it and don't get the best price by default. I decided to leave it until the day of the game to buy the ticket in case of any late changes but it was shaping up to be a good day out, with an hour stop in Hastings to sample some of their pubs too. 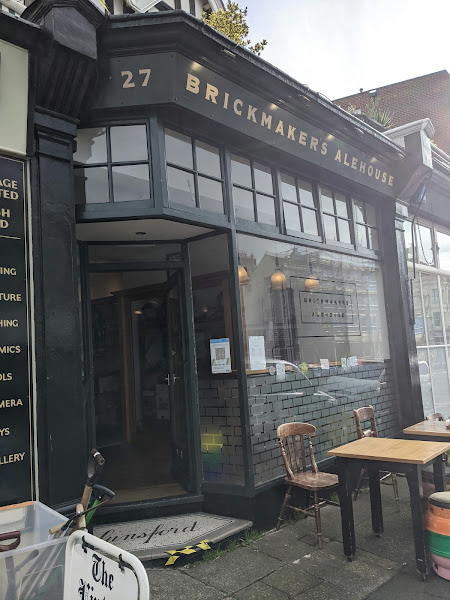 The day of the game came and I awoke at 7.10, ten minutes before my alarm was due to go off and feeling fairly decent despite only around five and a half hours sleep. I had a wash, got dressed and had a porridge pot for breakfast before leaving at 7.55. It was a rainy morning, but it didn't really amount to anything more than drizzle so I was happy to walk to the station as planned. I was there just after 9 and after buying my tickets, headed to the platform. It wasn't the greatest of starts, the train that I was due to take was cancelled and it was the decent service that went straight to Marylebone. I had to wait another 8 minutes for the slower service but it didn't matter too much as I should still make my connection. That I did with 20 minutes to spare, following a Bakerloo line train. I'd have gone to the pub for a swift pint but it was not yet open. I got the 10.45 train to Hastings which made slow but steady progress down to the south coast. The passengers were the usual mix of chronic coughers, mindless witterers and the other 99% of normal people. I got to Hastings at 12.20 and it was just a change of platform and a couple of minutes wait for my train to Bexhill. I was there at 12.34 and walked the short distance to the Brickmaker's Alehouse for a pint of Battle Organic Special Vintage Reserve which was superb. It was disappointing that they didn't have the other Battle cider listed, so I headed off to Spoons, The Picture Playhouse, 214 in the chain. The Cider selection was poor so I had a pint of Strongbow with my hot and spicy chicken. It was decent, though not as good as fish and chips. I then had a bottle of Hooch. A real nostalgia trip for me, a return to the Orchard Nightclub in Holmer Green when I was a young whippersnapper. I'd not had it for 20 years or so, but it made a nice change. From there it was to the ground where I paid £6 entry and also got a pint of Thatchers Gold for £4. The pint was not planned, but at least it helped out the club. 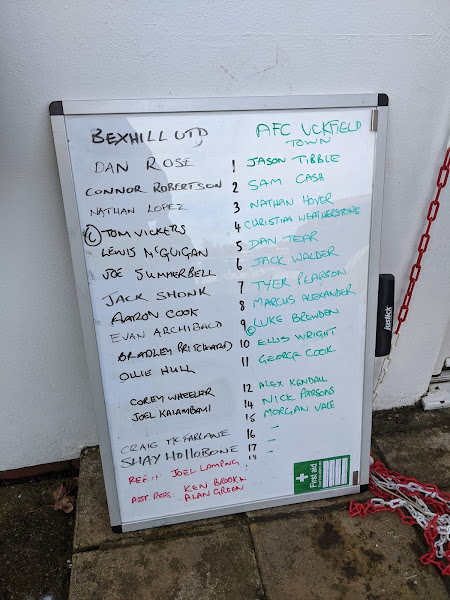 Bexhill United were in excellent form and unbeaten since a 4-1 defeat at Saltdean United on 11th September. Recent games had seen them beat Wick 3-0, East Preston 6-1 and Loxwood 5-0 as well as drawing 1-1 at Horsham YMCA and Broadbridge Heath. AFC Uckfield were in disappointing form. Having beaten Loxwood 3-1in recent times, they'd also lost 5-2 at Lymington Town, 1-0 at Peacehaven & Telscombe and 1-0 at Pagham as well as drawing 0-0 with East Preston. The hosts lead 1-0 on 14 minutes, Evan Archibald heading home a cross. The equaliser came on 32 minutes, a brilliant corner was put in and this was headed home, scorer unknown, as was the attendance as of writing this at 7PM. The second half petered out, maybe Bexhill deserved the win but AFC Uckfield played their part. It was just a shame it wasn't the same team that I saw triumph 4-3 against Langney Wanderers in 2018. 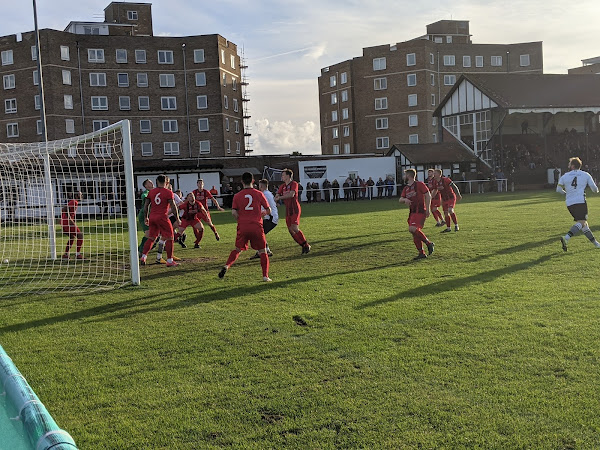 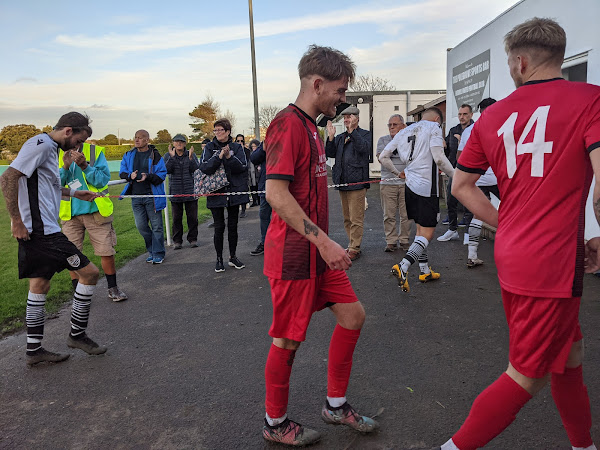 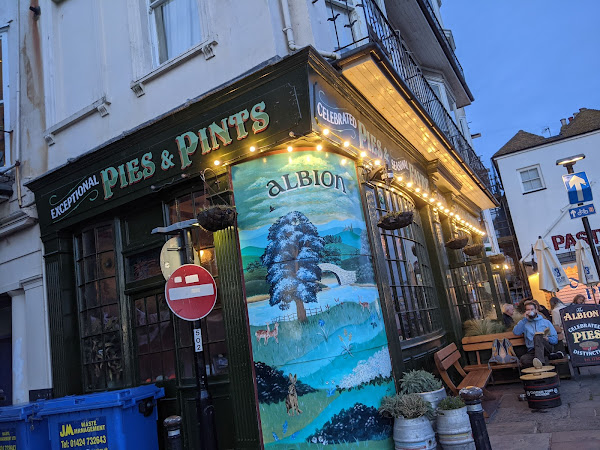 THE GROUND
The Polegrove is a nice venue. There's just the one stand, a large structure holding around 500. The view from here is not the best in a lot of places but it really is a lovely building. The club room is OK, it sells drinks and food but there are better options in town, ten minutes walk away. The town has its own train station which is well served and there is also a range of buses and plenty of parking available. 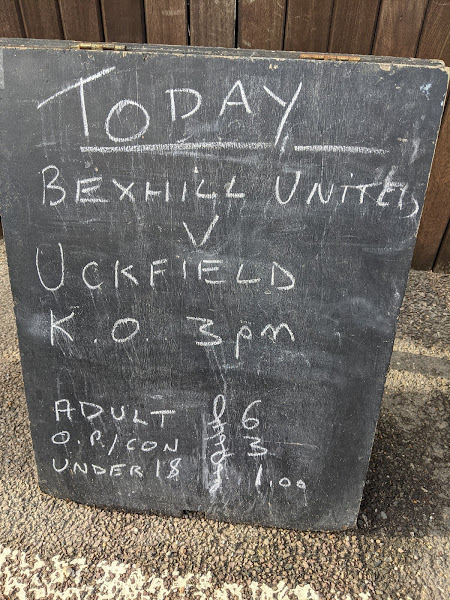 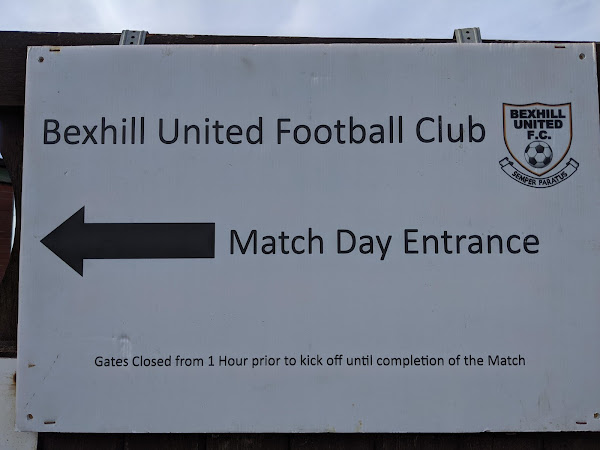 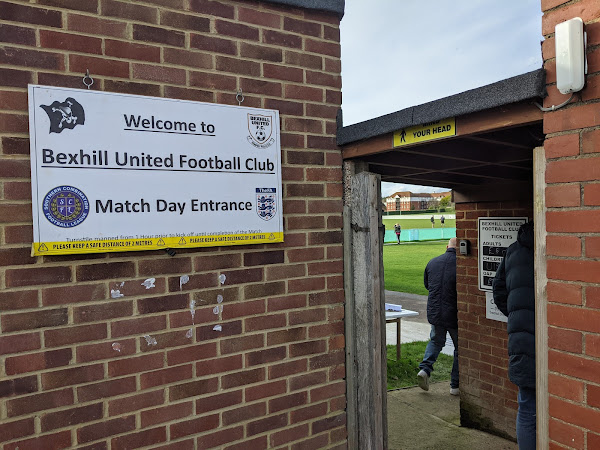 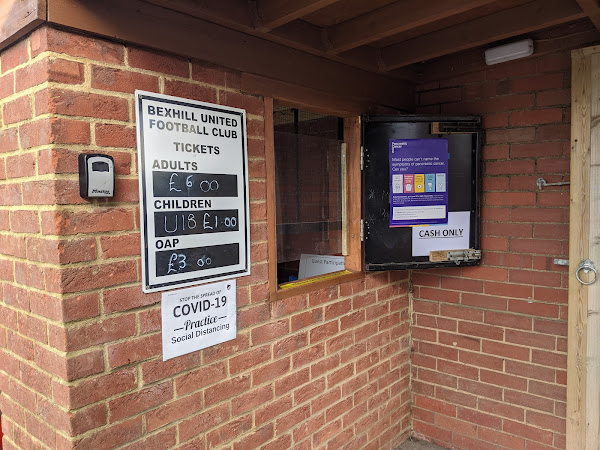 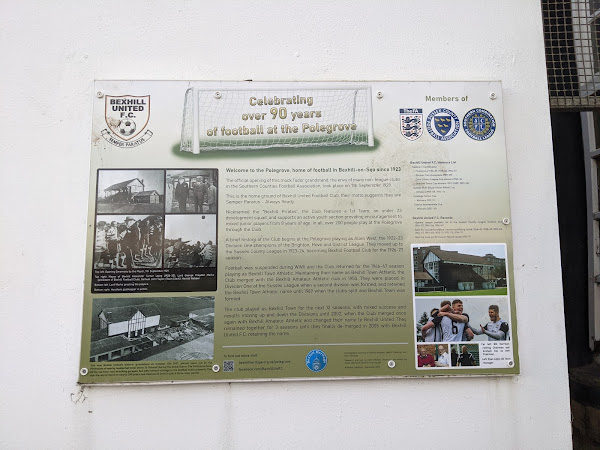 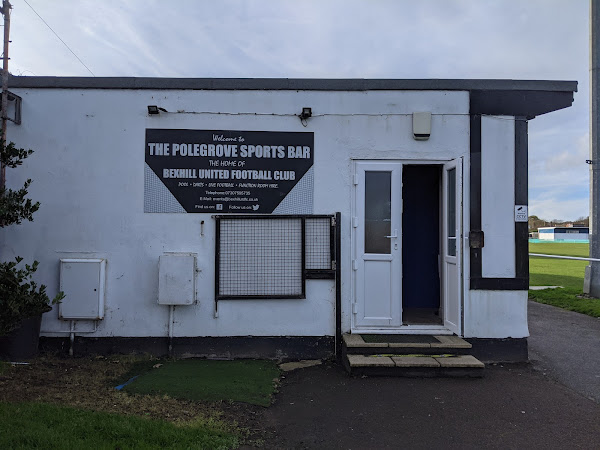 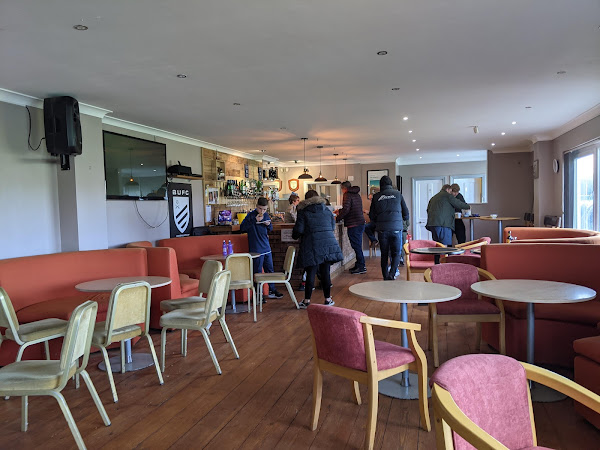 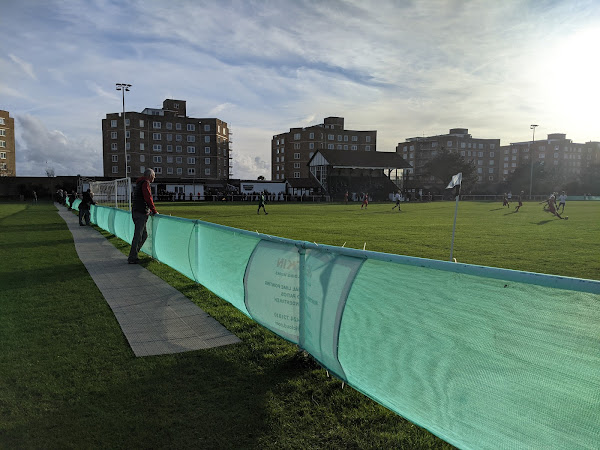 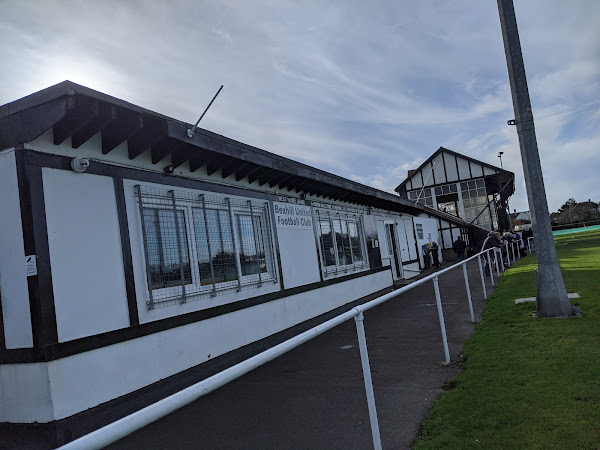 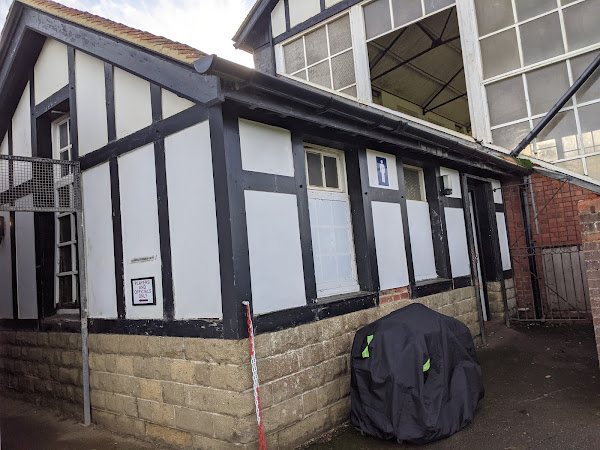 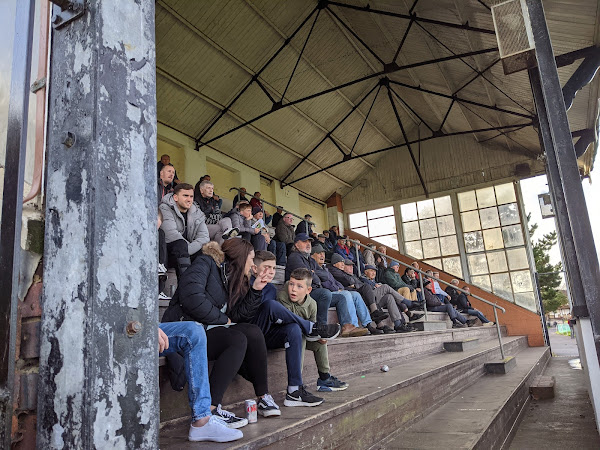 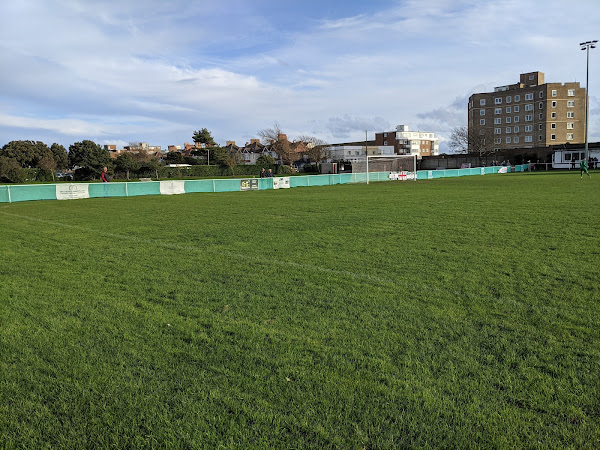 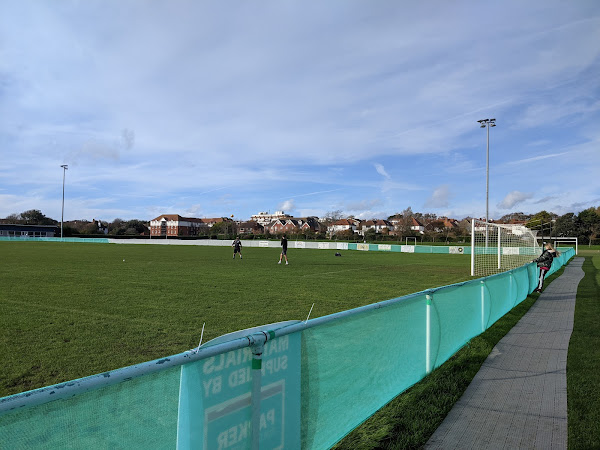