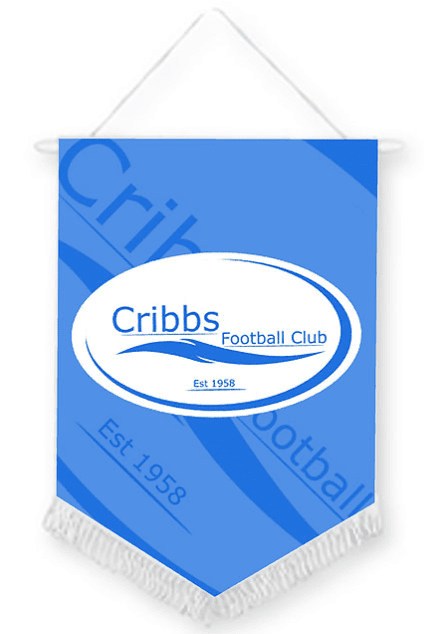 Cribbs FC
Cribbs Sports & Social Club
The Lawns
Station Road
Henbury
Bristol
BS10 7TB
Official Website
Twitter
Ground Number: 1005
Friday 8th October 2021
Cribbs 3-2 Hallen
Hellenic Premier
CRIBBS FC - A BRIEF HISTORY
The club was established in 1958 and was originally known as Sun Life Assurance and based in London. The company moved their offices to Bristol in 1976 and with it the football team but not a lot is known about what leagues they played in during their formative years. From 1976 until 1978, the club played in the Brsitol & Avon League at Dundridge Park in the Hanham area of Bristol near the River Avon. In 1978 they moved to their current home and played in the Avon Premier Combination, which was later renamed the Bristol Premier Combination. After finishing as runners-up to Roman Glass St George in 1999, they won the title the following year. They joined the Gloucestershire County League in 2000, changing their name a number of times to reflect the changing ownership of their parent company. They were known as AXA Friends Life, AXA and Cribbs Friends Life before settling on their current name in 2013. They held their own in this league at first but in 2011 they finished as runners-up to Brimscombe & Thrupp. The following year, they were champions, winning promotion to the Western Division 1 in the process. In 2015, Cribbs finished 3rd behind Barnstaple Town & Welton Rovers to win Promotion to the Premier Division. They remain there to this day, their best finish of 8th being achieved in 2017 & 2019.
Cribbs enjoyed their best FA Cup run during the 2020/21 season. After beating Newent Town 3-1 and Berkhamsted 2-0, they bowed out 3-1 at Chichester City in the 1st Qualifying Round. The 2018/19 season saw the clubs best-ever FA Vase run as they won 5-1 at Shortwood United, 3-2 at Brimscombe & Thrupp, 2-0 at Newport IOW and 4-2 at Saltash United. In the 4th Round, they finally got a home draw but bowed out 2-0 to Sholing. Local cup honours include the GFA Minor Cup in 2005, the Las James Cup in 2012 and the GFA Challenge Trophy in 2019. The club is named after the Cribbs Causeway area of Bristol which is known for it's shopping centre with 150 stores, car dealerships, hotel and bus station. Over 6,000 people are employed by the various companies in the area. The ground is in the Henbury area of Bristol which has a population of around 11,000. 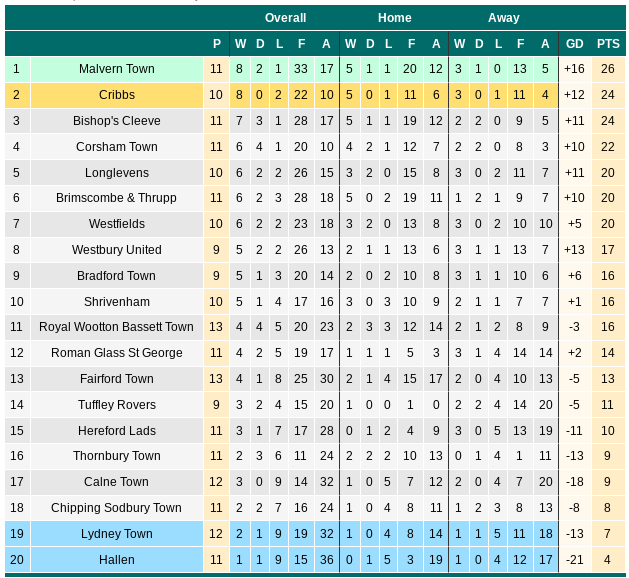 MY VISIT
This would be the first day of my fortnight off work and I was keen to do a game. I knew that I would be on my own on this day as all my hoppers were otherwise engaged. There was really only one choice, Bristol-based Cribbs against Hallen in the Hellenic Premier. I'd been hoping for something closer but as of Thursday evening, my Football Traveller magazine had not arrived as we had not had any post for three days. I did my research on Thursday evening, looking at the club history and potential pre-match plans. Friday was my first day off work and I walked to town and back. Having something to eat when I got home, I was glad when we had our first postal delivery in three days and I got my ticket for Newcastle and the latest Football Traveller. The latter proved to be a slight disappointment for the immediate future with nothing showing on Sunday and Monday. I left just before 4. It was a decent journey down but I had a fair amount of thinking time. I'd originally looked for a hotel in Newcastle for my trip to the North East next weekend as that's where I'll be on Sunday. I found one in nearby South Shields although a lot of my football will be in the Sunderland area. With that in mind, I looked to see what was available. The choice was far more abundant than Newcastle and I found somewhere for a couple of nights on Roker Beach for a few quid cheaper and that would also save on bus fares and time. I did all this whilst ordering Thai Green Curry and Salt and pepper chips at AJ Takeaway a few miles from the ground. It was over a tenner but the portions were large and taste excellent. I eat some in the car and saved the rest until I got to the ground. I got there at 6.50 and decided to park on the lane outside. Entry was a well priced £6 and a programme £1. I caught up with things whilst waiting for the game to start, strolling around the ground and finding a spot on the halfway line before kickoff. 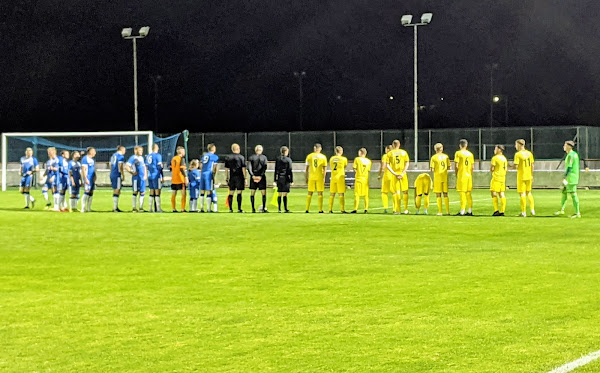 Cribbs were in great form and sat 2nd in the table. In the league, they had suffered a defeat against leaders Malvern Town on Saturday but otherwise had won their last six games. Results included a set of 1-0 wins against Fairford Town and a 5-1 win at Hereford Lads Club. Hallen were down in last place but had a morale-boosting 1-1 draw against Chipping Sodbury Town on Tuesday. Their only league win had come ten days ago, 5-2 at Brimscombe & Thrupp. In between these results had been a 6-0 loss against Westbury United and they had lost nine of their eleven games played so far this season. In terms of geography, the teams were closer with just 2.5 miles between the two grounds. Cribbs were in blue with Hallen in yellow. The hosts were on top early on and a header from a cross forced the Hallen keeper into a good save within the opening minute. It was Hallen who took a surprise lead on 7 minutes with their first chance of the game. It was a good goal too, a shot on the turn from the edge of the area by Tommy Backwell. This spurred the visitors into a good spell and they headed just over a minute later. Cribbs equalised after 20 minutes, George Kellow poking home from inside the area after Hallen failed to clear their lines. The hosts took the lead on 34 minutes when a penalty awarded for a foul was converted by Ross McErlain. Cribbs hit the outside of the post on 55 minutes but Hallen equalised after an hour. The ball fell nicely to a player on the edge of the area and he slotted into the bottom right-hand corner. The visitors could have taken the lead on 72 minutes, forcing the Cribbs keeper into a great save before heading over the resulting corner. Cribbs had a chance of their own on  75 minutes, Nick Jones forcing the keeper into a good save with the ball eventually cleared. Six minutes from time, Cribbs got the winner, Jones slotting home from inside the area. 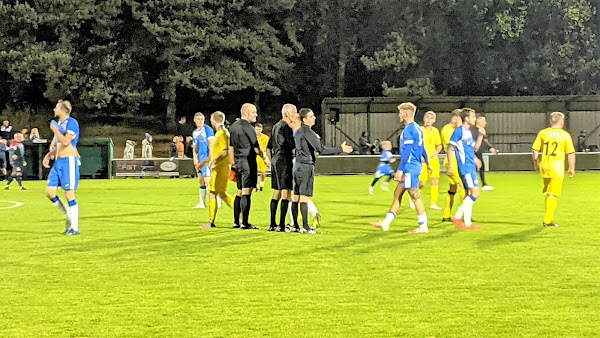 It had been a decent game but the result had been a bit Harsh on Hallen who certainly didn't look like a bottom of the league side. Cribbs edged the game though and the majority of the 202 crowd would have gone home happy. With their average so far this season being just over 130, it was a good crowd for Cribbs. It was yet another advert for Friday night football but not enough leagues and clubs go for it. I left the ground around 9.40, stopping at a local Co-Op on the way. I was disappointed there were no local ciders for me to buy but I did get a soft drink for on the way home. I listened to an audiobook on the way home and was sent via Cirencester and Oxford as part of the M4 was closed. I stopped to top up with petrol at ASDA on the way home and got in at 11.50. Unusually for a Friday night, I wasn't drinking, just not being in the mood. I still stayed up though, typing my blog and watching Coronation Street. I went to bed around 1.30, looking forward to the Wycombe game tomorrow. I'd enjoyed my night at Cribbs and the programme was also a great effort for £1, well-produced and with a decent amount of information. 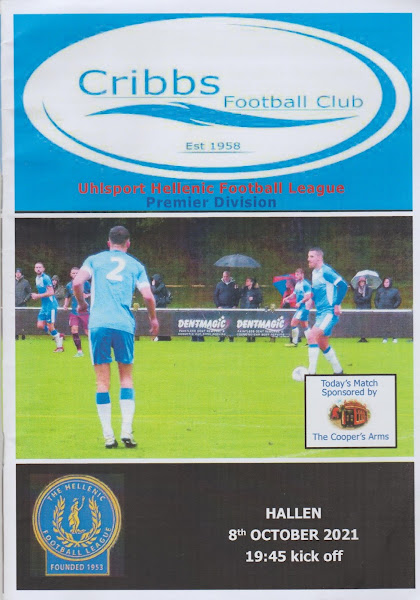 THE LAWNS is a very well kept venue, but the facilities are quite basic. In keeping with recently developed non -league grounds, there are two metal 'Arena' type stands, these tick boxes but are not especially attractive. They do keep you reasonably dry in the event of rain though and hold 100 people between them. The rest of the ground is open hard standing. A lot of these pictures were taken in daylight back in September 2020 when I was on my way home through the area. The bar was really smart and along with the food hatch, offered a reasonable section. There's plenty of parking and a bus stop down the road around 10 minutes away, alongside a parade of shops. 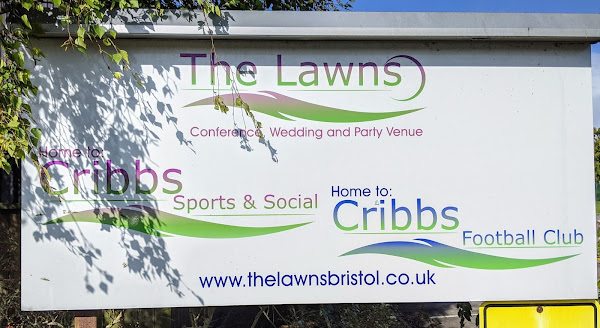 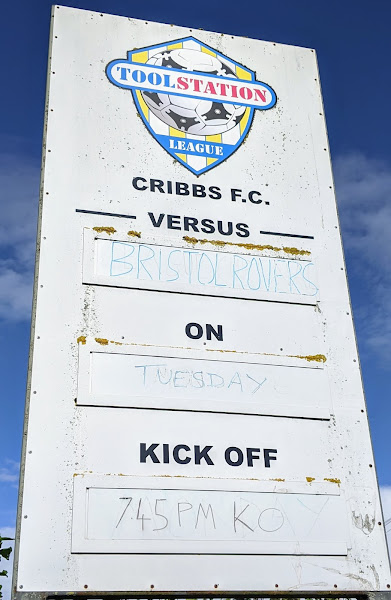 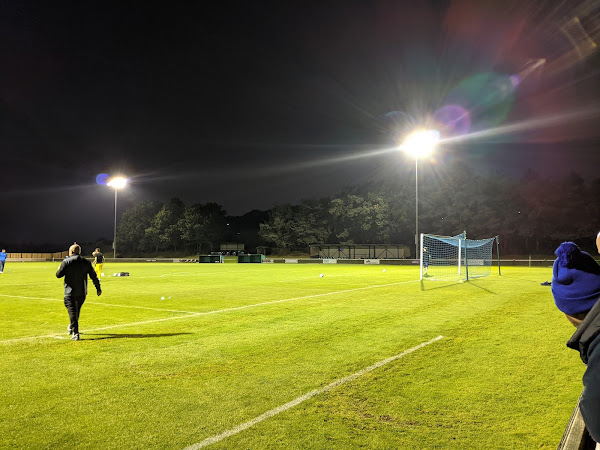 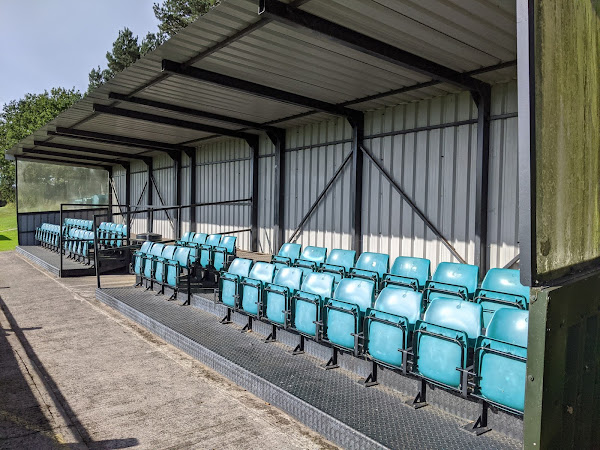 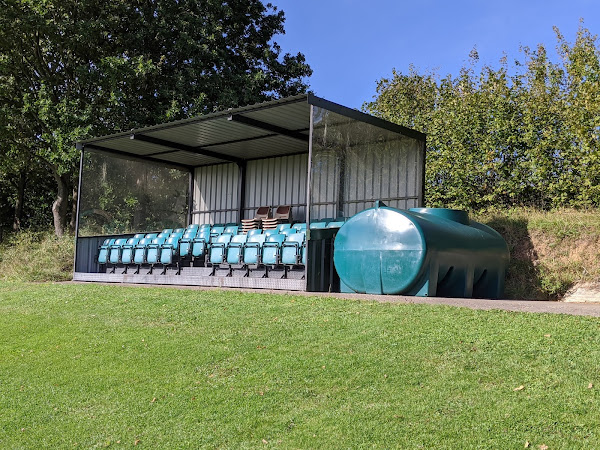 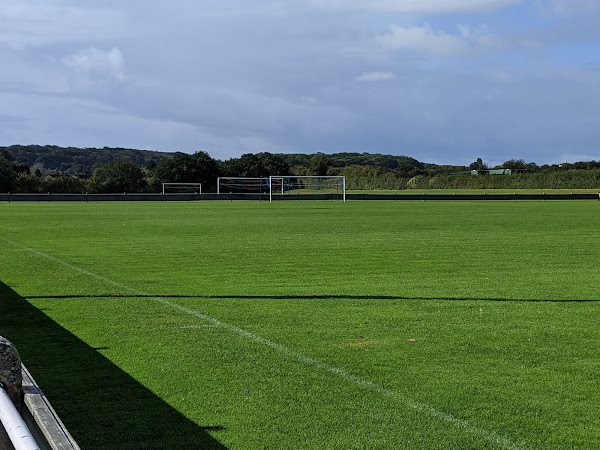 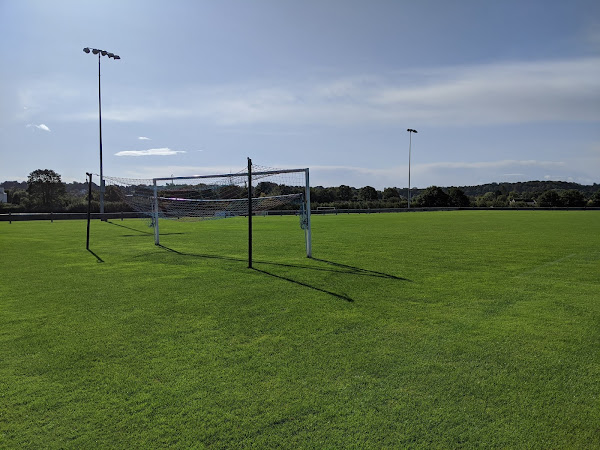 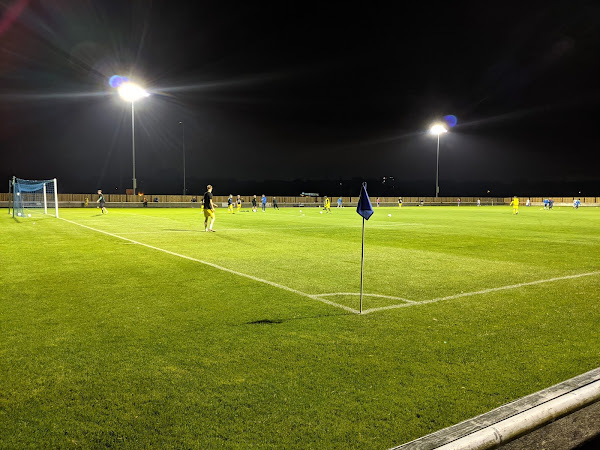 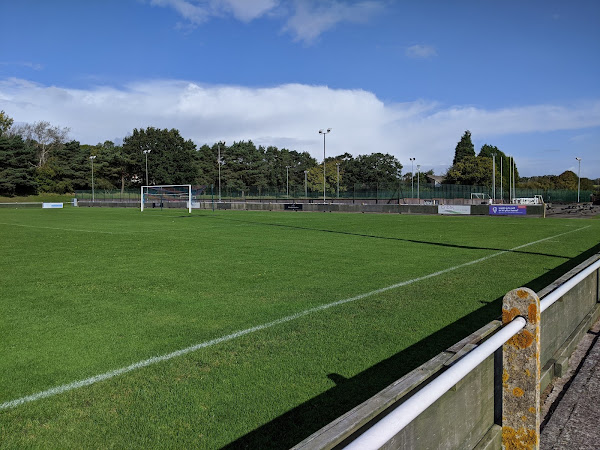 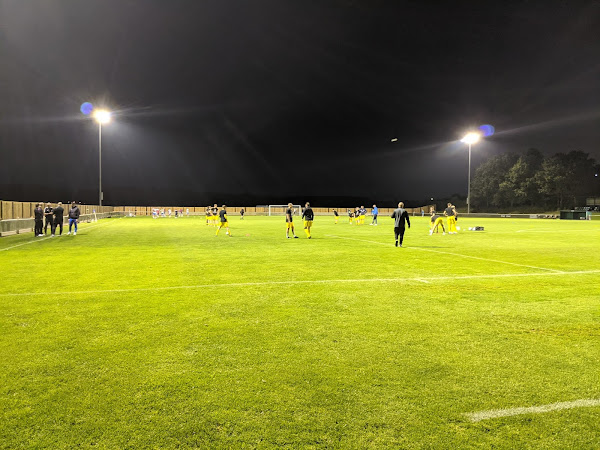 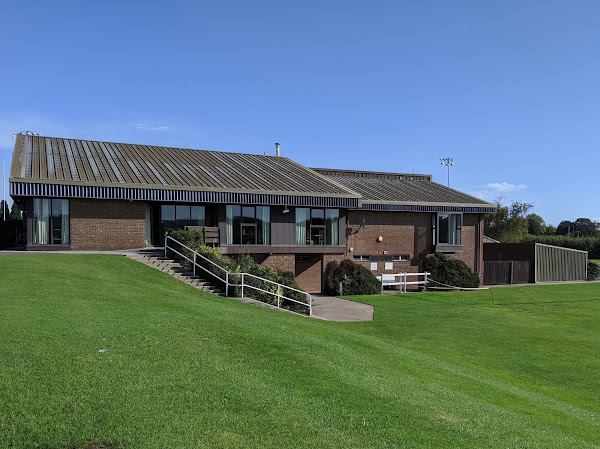 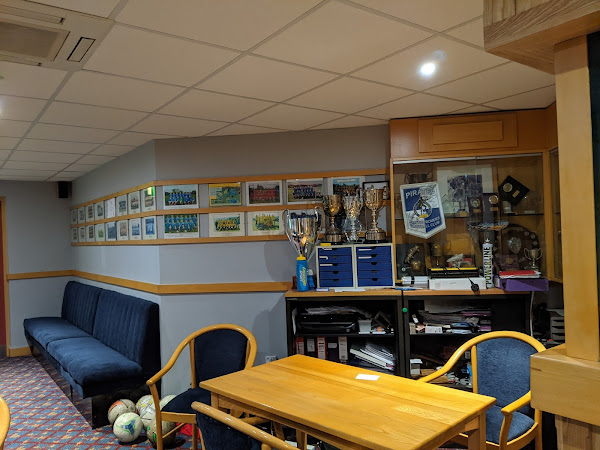 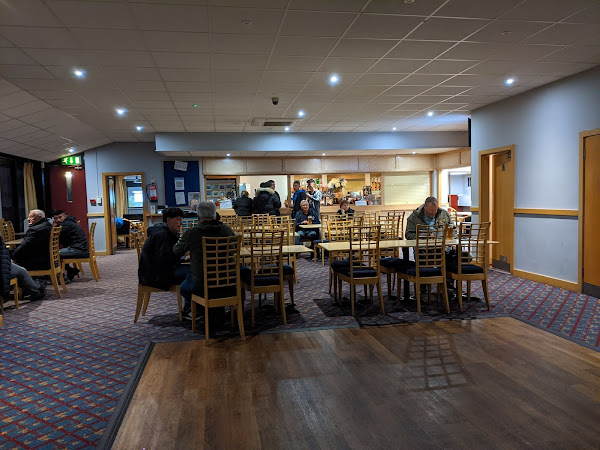