After visiting Tottenham on Sunday, I was looking forward to ticking off the other big ground in North London as Arsenal played Shrewsbury Town at The Emirates Stadium. Having seen that Arsenal always did cheap tickets for Carling Cup ties, and having not bothered in previous seasons, I was determined to get a ticket this time. The Shrews were the side that Wycombe stopped going up after a controversial non-goal by Gareth Ainsworth in a 1-1 draw at the New Meadow, last March. Actually, there were 45 other games that shaped that season, but this is the one incident that will stick in the mind of the Shrews fans. Once again I would be willing the League 2 side to win though, despite sitting in the home end, just as I had done for West Ham United v Aldershot Town a month previous. 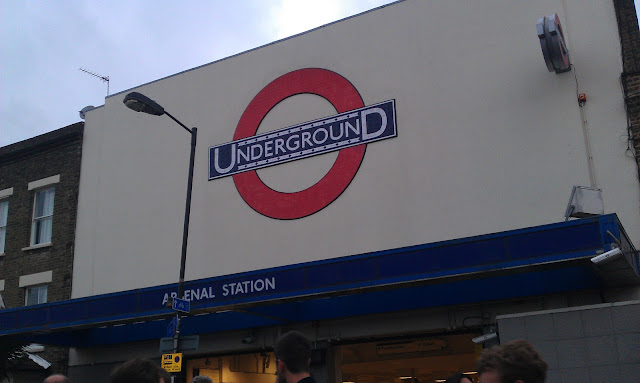 I left home at around 4.30, having elected to go up on the train. Despite the fare being a steep £11, it was cheaper than driving and finding somewhere to park. I met fellow Wycombe fan, Ben Bodger Woodward, at the station by chance, and by a strange coincidence, he was also off to the same game. We went our separate ways though as he was waiting for some other mates. After a pain-free journey across London and into Arsenal Station, I had time to have a look round the outside of the stadium. There were several food and merchandise stalls in the vicinity of the stadium - food-wise, everything from Jerk Chicken to Greek Sausage. I opted for the healthy option - a punnet of grapes from the local Tesco Express, as I wasn't really hungry. I made my way into the stadium around 7pm, having a look around to see what there was. It looked fantastic under floodlights and the tannoy system was nice and loud. Arsenal did their usual thing of only reading out the home side's players first name, something that I have not seen elsewhere.


The game itself was a cracking cup tie, with Shrewsbury taking the lead through James Collins and coming close to adding to their tally. But Arsenal equalised through Kieran Gibbs just after the half hour mark and despite Shrewsbury looking the better side, the teams went in level at half time. Arsenal took control in the second half. Goals from new signings Alex Oxlade-Chamberlain and Yossi Benayoun put the home side through to the 4th round. During the game, there was plenty of banter between both sets of fans. The stewards were constantly telling the Shrews fans to sit down and were getting plenty of stick because they didn't apply the same to the Arsenal fans as much. There were a couple of blokes who were especially persistent in arguing with the stewards, but they didn't get thrown out, yet another person who wasn't nearly as bad, got hauled out for lesser offences. Getting away from the stadium was pretty easy, despite a lot of people saying that it takes ages. I walked up to Highbury and Islington station, got on a train almost straight away and was back in Harrow by 10.30. Unfortunately, I had to wait over 30 mins for a train to Amersham, meaning I got in just before midnight - not good when you are up at 4 the next morning! 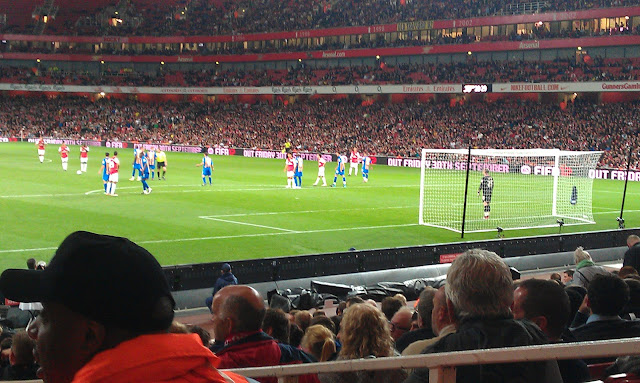 On the football ground guide website, it claimed there was a Ladbrokes and a good selection of food. Both proved to be false though, with there just being match betting by Arsenal Bet and the usual dull selection of food at much higher prices than usual. The concourse was really spacious and the toilets a lot more upmarket than you'd expect to find at a football ground.

Inside the stadium was a lot better. I had read that the lower tier was a bit shallow, and not the best of view, but this turned out to be false. The view was excellent from all areas of the stadium and for the price of £10 was a bargain. The rest of the stadium was mightily impressive too, with large padded seats and plenty of legroom. There were a couple of video screens, one in each corner. This was not your typical "out of the box" new-build stadium, some thought had actually gone into it. 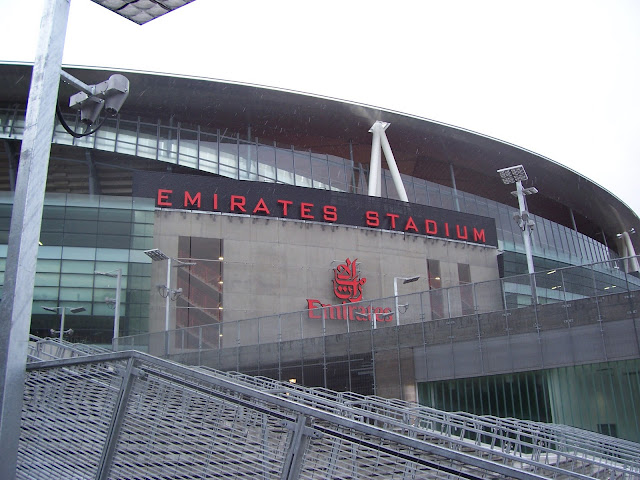 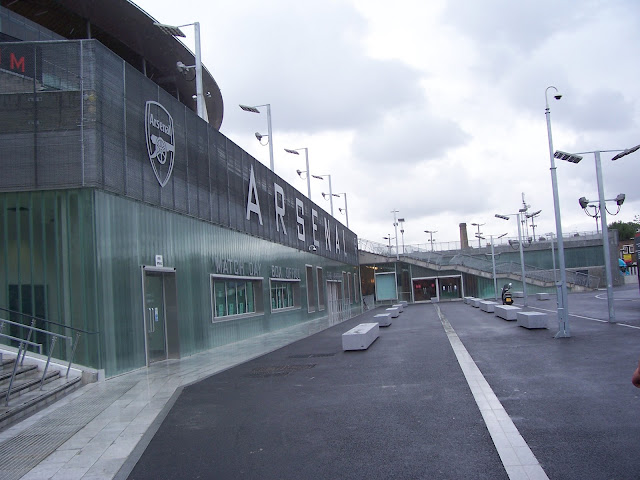 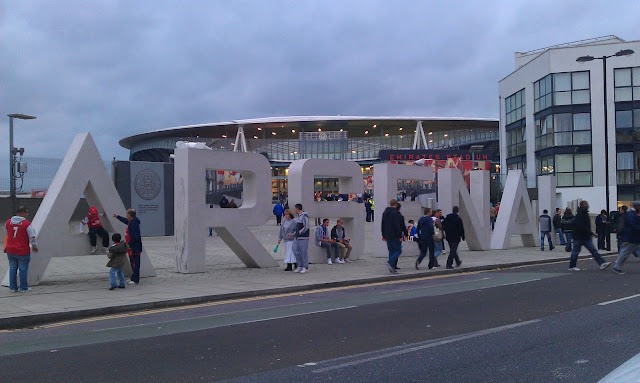 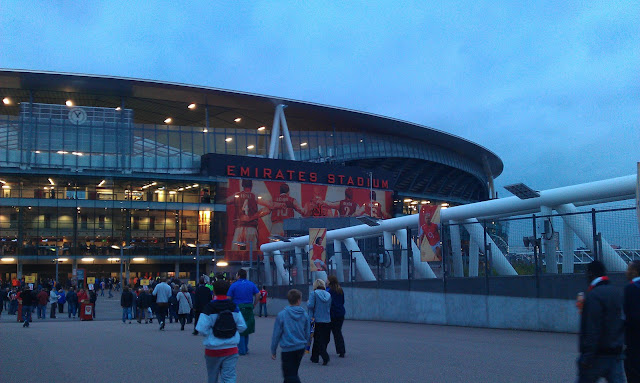 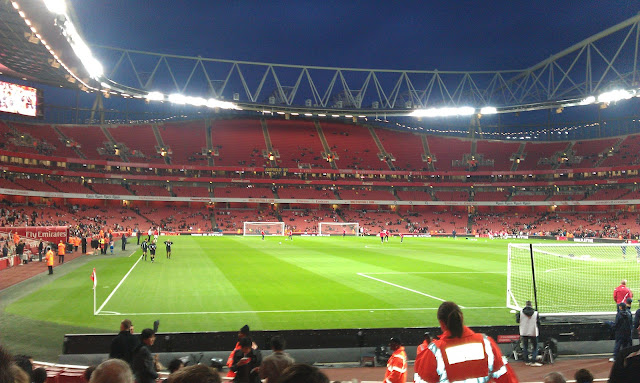 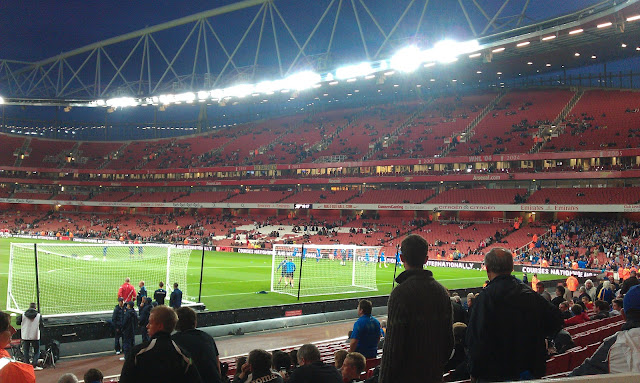 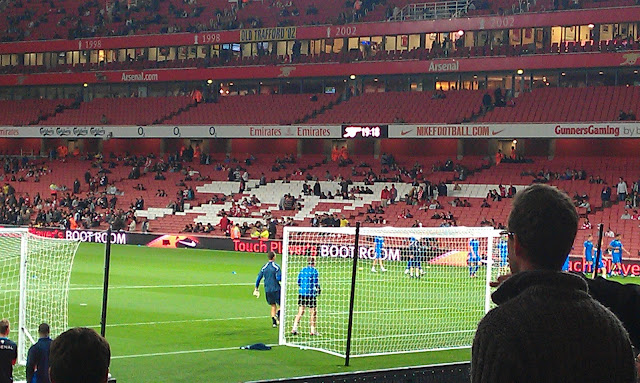 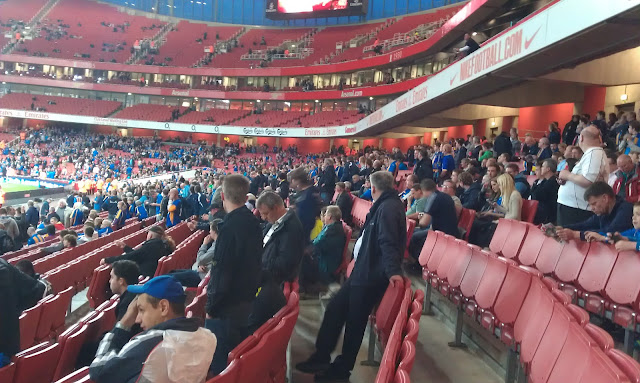 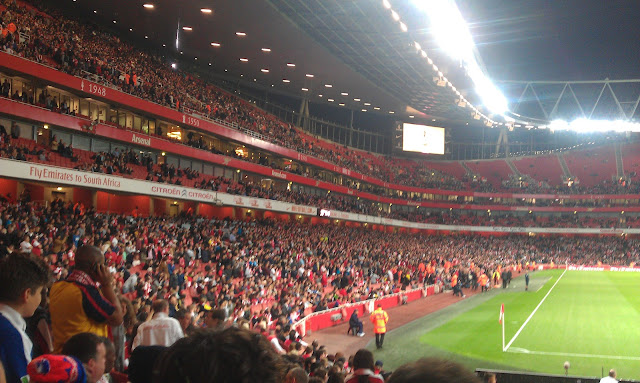