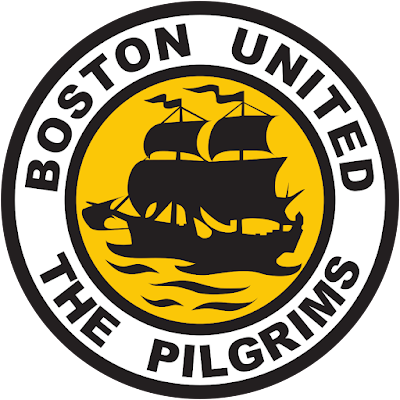 Boston United FC
The Jakemans Community Stadium
Pilgrim Way
Wyberton
Boston
Lincolnshire
PE21 7NE
01205 364406
Official Website
Twitter
Ground Number: 1007
Tuesday 12th October 2021
Boston United 4-1 AFC Telford United
National League North
BOSTON UNITED - A BRIEF HISTORY
The club was formed in 1933 as a response to Boston Town (no connection to the modern-day club of the same name) going bust. They took the former clubs place in the Midland League, staying there until 1958 and finishing as runners-up in 1956. A three-year spell in the Southern League followed before a return to the Midland League. Spells in the United Counties and West Midlands Regional League followed and Boston United won titles in three successive seasons between 1966 and 1968. That year, they became founder members of the Northern Premier League (NPL). They were Champions four times during their first spell here, leaving to join the Alliance League (later to be renamed the Conference) - the highlight of their first spell being a 3rd place finish in 1989. By 1993 however, their form tailed off and despite gaining a credible 3-3 draw at eventual champions Wycombe Wanderers, they were relegated to the NPL. Finishes were in the top 6 for all their time here and this continued when they made the sideways step to the Southern League in 1998. The turn of the century saw them crowned champions and by 2002 they had won the Conference too. Despite irregularities with player registration, they were allowed to take the promotion to the Football League, albeit with a four-point deduction for their debut season. They'd remain in the basement division of the Football League for five seasons, the highlight being two 11th place finishes. Due to the club entering a CVA in 2007, they were forced to drop two divisions after finishing second-bottom of League 2. Despite a 10th place finish in the Conference North in 2008, the club were relegated again due to still being in administration. After a 16th place finish in the NPL Premier, Boston United finished 3rd in 2010, beating North Ferriby United and Bradford Park Avenue in the playoffs to return to the Conference North. They've been there ever since, finishing as low as 16th in 2013 and as high as 3rd in 2011 and 2015 and losing out in the playoffs a couple of times. Prior to my latest visit, they sat in 14th but four points outside the playoffs as it was still early in the season.
Boston United have reached the 3rd Round of the FA Cup on a number of occasions. Firstly in 1956, they lost 4-0 at Spurs in front of a crowd of 46,185. They'd have to work until 1974 for their next appearance, drawing 0-0 at Derby County before losing the replay 6-1 at home in front of a record home crowd of 11,000. The FA Trophy Final was reached in 1985 where Boston lost 2-1 to Wealdstone. Little progress was made in either of the Football League cups but locally Boston have won a number of cups. These include seven NPL League Cups, fifteen Lincolnshire Senior Cups, two Non-League Champion of Champions Cup, the East Anglian Cup and the Eastern Floodlit Cup. Their record win of 6-0 came against Shrewsbury Town came in 2002. The town of Boston has a population of 35,000 and is home to 'The Stump' - the largest parish church in England. It was also the town that voted most for Brexit, with 75% of the residents voting to leave the EU in 2016. Notable people to come from Boston include Blackburn Rovers' record scorer Simon Garner and former Welsh international footballer John Oster. After years of playing at their iconic York Street Ground, they left for pastures new this summer as the upkeep of the ground and the value of the town centre land proved tricky and they now play in nearby Wyberton. 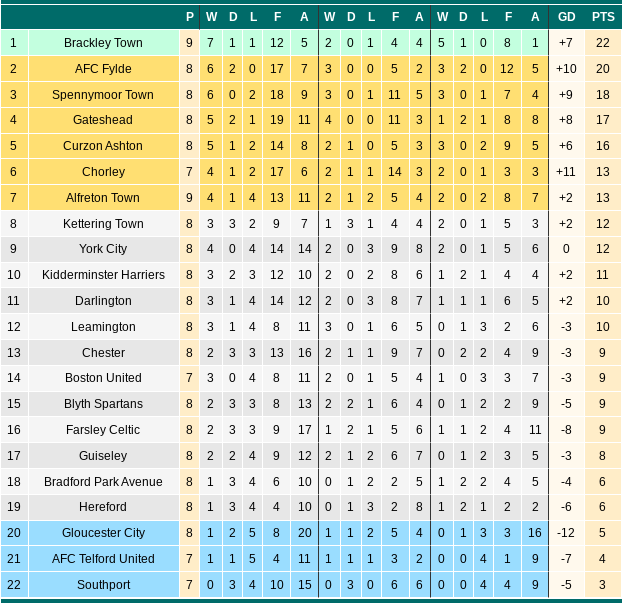 MY VISIT
Unusually, there were plenty of options on this Tuesday and as I was off, there wasn't so much concern about getting back home quickly. I produced a list of options for Anwar and he opted for Boston United - either on the Tuesday night for the AFC Telford United game or on Wednesday for the Chesterfield game in the FA Youth Cup. In the end, I opted for the Tuesday game as it was by far the most attractive game and I could go to Staplehurst Monarchs United on Wednesday. I looked at the price of £14 and it seemed quite pricey initially. But given that I had paid £15 at Darlington a few years back and York City were asking £20 for admission to their games, maybe it wasn't so bad after all. The Kings Lynn FC chairman had been involved in a moment of controversy on Twitter when he named and shamed someone coming in on a child ticket and threatened to ban them. Hardly surprising when the club was asking £21 for a ticket on an uncovered terrace, far too pricey and it seems as if you are a fan at that level, you get some of the worst value for money tickets in football. Looking at my old blog, I was surprised that it had only been two years since I had visited the old Boston ground as it seemed a lot longer than that. The day of the game came and after a walk in the morning, I came back and had lunch.

I left at 3.20 as I'd planned to meet Anwar at 3.45. Normally I'd have got there comfortably but the waste of money that is HS2 had other ideas. They'd stuck up temporary traffic lights which caused 25 minutes delay and when I drove past there were huge groups of people standing around doing nothing. I got to Anwar and we left at 4.10, having to divert through Wing because of yet more roadworks on a road there. There were then delays on the Black Cat roundabout and around Peterborough but nothing unexpected for that time of the day. We arrived at our pre-match food place of Big Boy Takeaway at 6.35 and I ordered a spicy burger meal for £7 which was very nice and decent value. It was then five minutes drive to our parking spot near Wyberton FC. It was a shame it was dark as I'd liked to have got some photos of their ground. We got to the ground at 7.15, having a stroll around and opting to go in the East Terrace, standing along the side. The food choice and prices inside the ground were surprisingly decent and as good a value as I've seen anywhere. I later had a portion of curry sauce and chips for £2 which were OK but could have been fresher. I noted with interest that the interim Boston manager was Dennis Greene who had played for Wycombe in the early 1990s and done fairly well. He had gone on to do a great job at Windsor & Eton as manager but had a mixed record elsewhere. 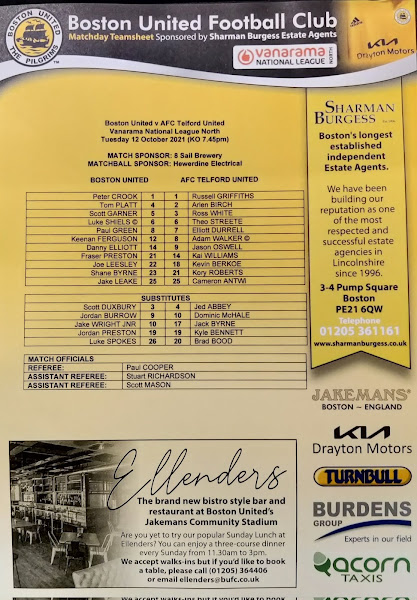 Boston United were in mixed form and sat 14th in the table. In the FA Cup, they had been in fine form against lower league opponents beating Corby Town 6-0 and East Thurrock United 4-0. In the league, they had lost 3-1 at Gateshead in their latest game and also been defeated 2-0 at Leamington. But they'd won 2-1 at Bradford Park Avenue and beaten Guiseley 2-1 at home. AFC Telford United were second-bottom. Their season and recent results had been a big disappointment and they had gone out of the FA Cup 2-1 to lower-division Stamford. They'd also lost 3-0 at Alfreton Town,  2-0 to Brackley Town, 3-0 at Darlington and 1-0 at Spennymoor Town. The last time they had avoided defeat was 30th August when they drew 0-0 with Hereford and their only win of the season came as they beat Chorley 3-0 on 21st August. The hosts started on fire as per the formbook, hitting the post after 3 minutes and taking the lead on 7 minutes thanks to a shot on the turn from Danny Elliott. Elliott got his second on 20 minutes, following up when a great free-kick from Joe Leesley hit the angle of post and bar before bouncing out. AFC Telford pulled a goal back on the half-hour, capitalising on a mistake from Boston keeper Peter Crook who kicked the ball straight to Jason Oswell who had the simple job of putting the ball back past him. At the other end, the Telford keeper Russell Griffiths produced a great save to tip the ball onto the bar and keep his side in the game. Telford dominated the second half but lacked the quality up front to test the keeper. Boston turned the game in their favour on 80 minutes thanks to a deflected shot by Leesley to make it 3-1. The game was sealed when the hosts were awarded a soft penalty which was converted by Jake Wright.

There had been plenty of hoppers in attendance including Man City fanatic Tony who I said a brief hello to. There were 1,436 fans in attendance overall. The result had been harsh on Telford, yes, they deserved to win, but only by the odd goal. They'd looked far from a struggling side during the second half but a poor opening half had cost them. They'd had to make a ludicrous trip for a Tuesday night, 133 miles and nearly three hours each way in a so-called regional league. The North is by far the toughest of the two leagues and is far more spread out than the south. We had 10 minutes walk back to the car, leaving just before 10. As per usual I listened to Andy Crane on Greatest Hits Radio and got the guess the year contest correct. There were a couple of minor road closures on the way home but Anwar slept most of the way and I got back to his at midnight. Another road closure meant that I had to take a back route home. I wanted to fill up with petrol as I've almost certainly decided to drive to Staplehurst tomorrow. However, the only garage at Holmer Green was still closed and has been for some time as it's one of the few stations around here to take part in the so-called 'fuel crisis'. I was back home by 12.35 and stayed up for a couple of hours typing my blog and watching TV. 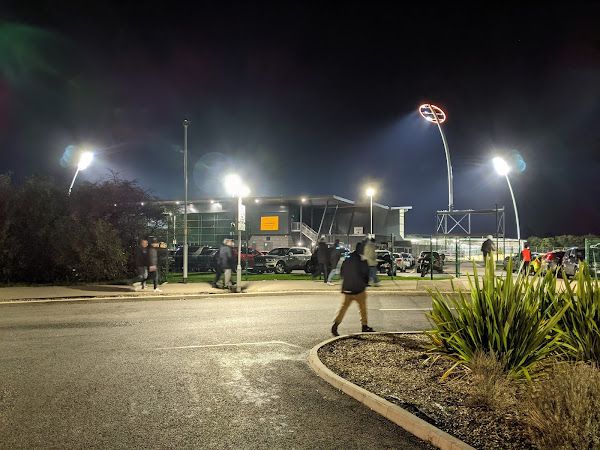 THE GROUND
The Jakemans Community Stadium will never be as good as the clubs former home at York Street, but it's a pretty fine effort. The seated stand is the standout area and is of a nice design with the club's name and colours picked out on the seats. It has a capacity of around 2000 and is a step up from the stand at the old place. One side and one end are smallish terraces, these have a large space at the front for emergency use and in the case of the terrace behind the goal, getting out of the ground. Part of the side terrace is given to away fans. The terraced capacity is around 3000. There's one end that was not used, though it could probably hold a few hundred on open flat standing if the need arose.
Facilities at the ground are decent. The bar looked very smart and the food offering in the ground was varied and well priced. There was also a club shop with a decent range. Outside the ground are some takeaways - Costa Coffee, Burger King, Papa Johns and maybe a couple of others. Parking is limited at the ground, although there are regular shuttle buses to the town and a couple of car parks. There is also plenty of street parking near Wyberton Sports Club, around ten minutes walk from the ground. 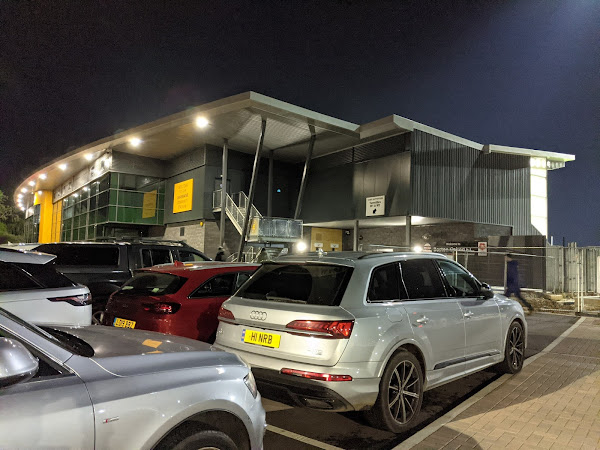 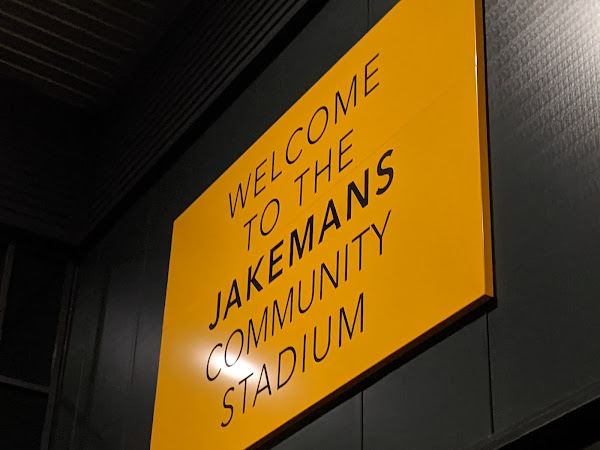 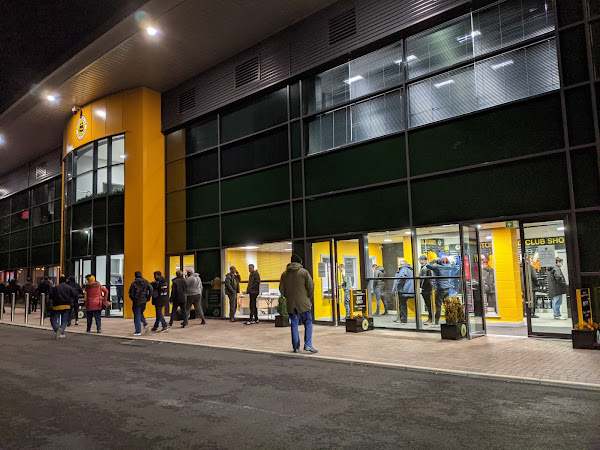 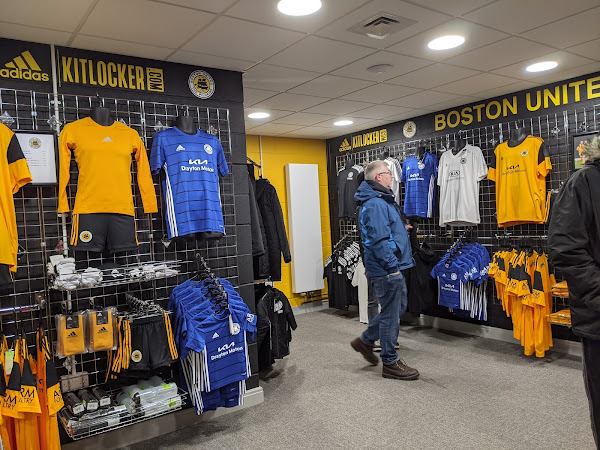 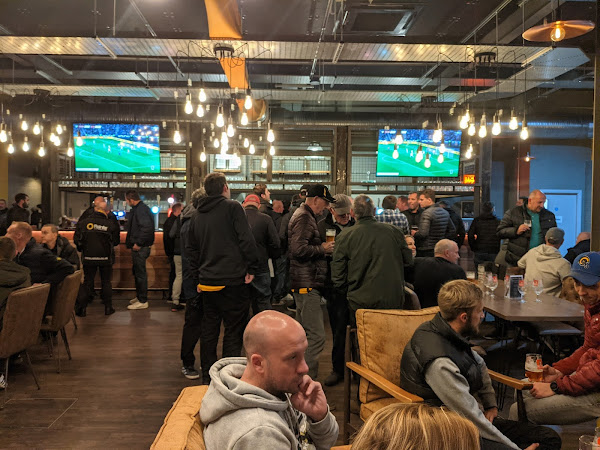 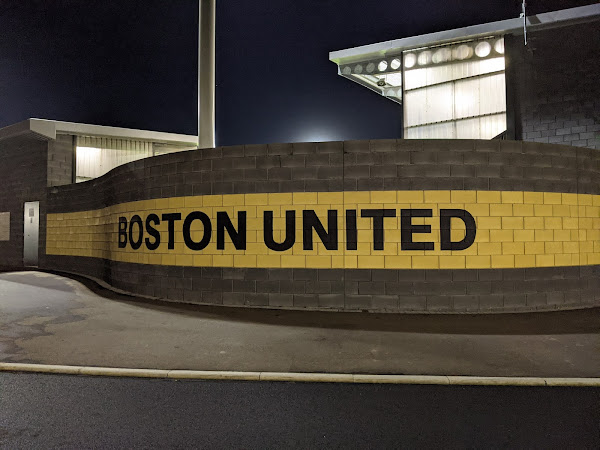 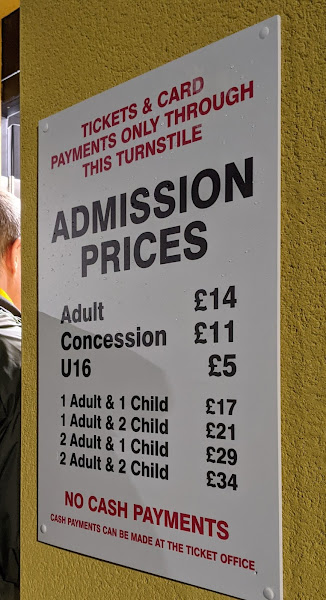 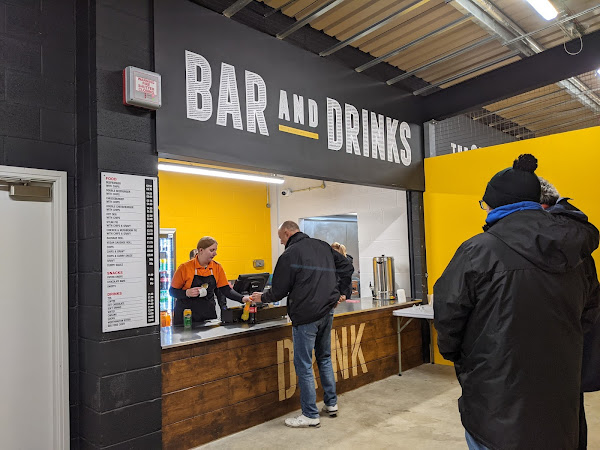 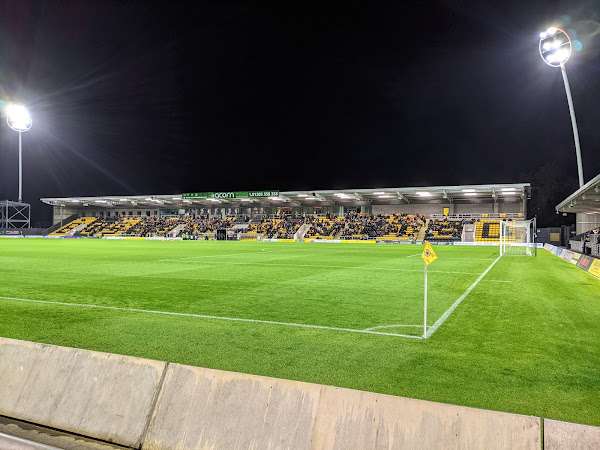 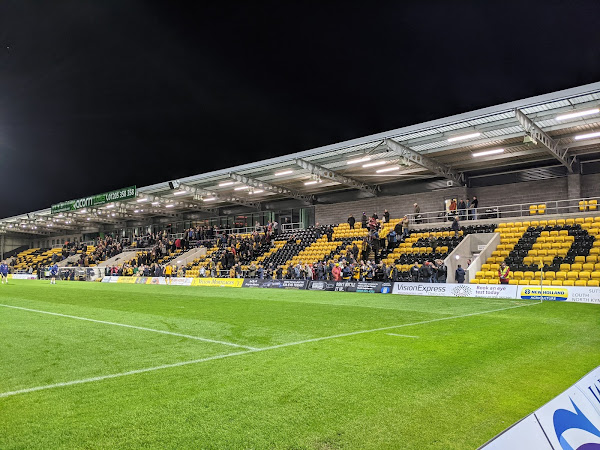 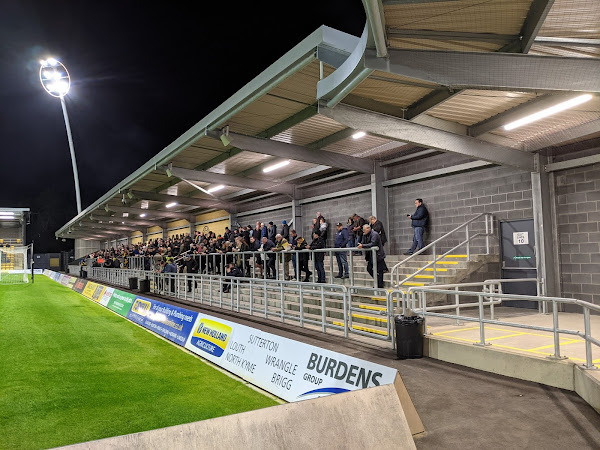 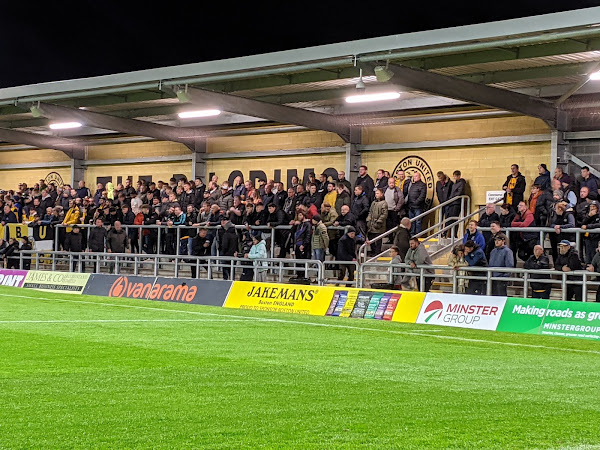 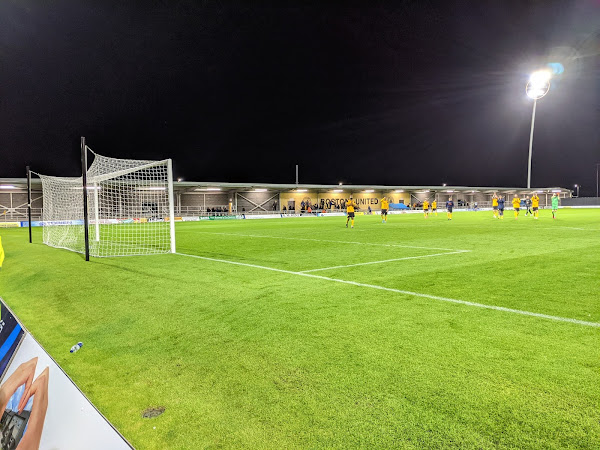 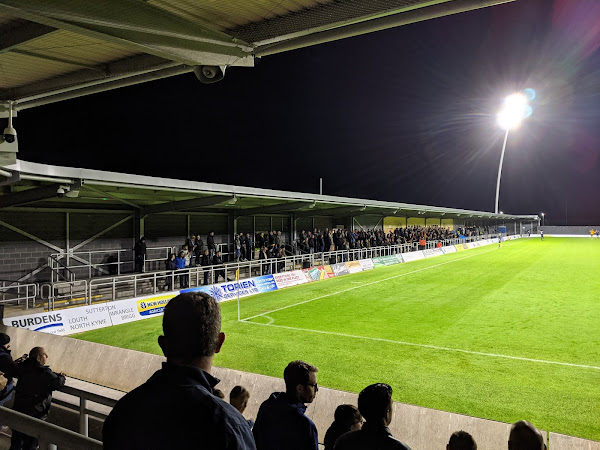 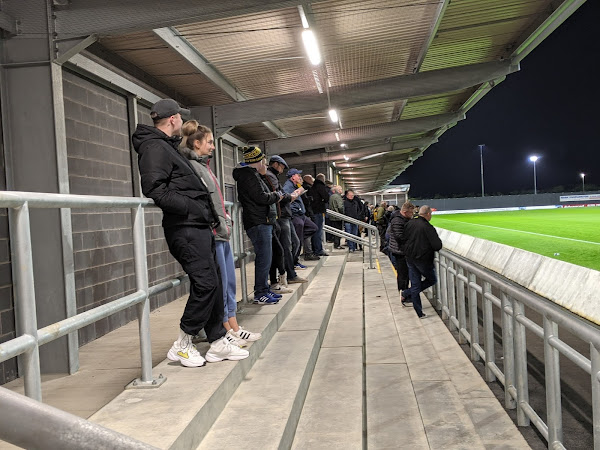 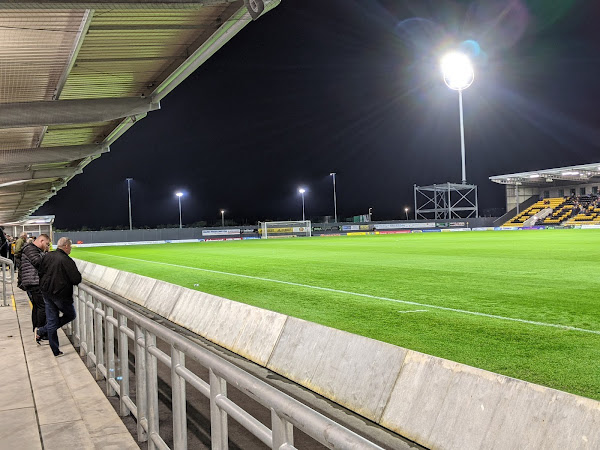 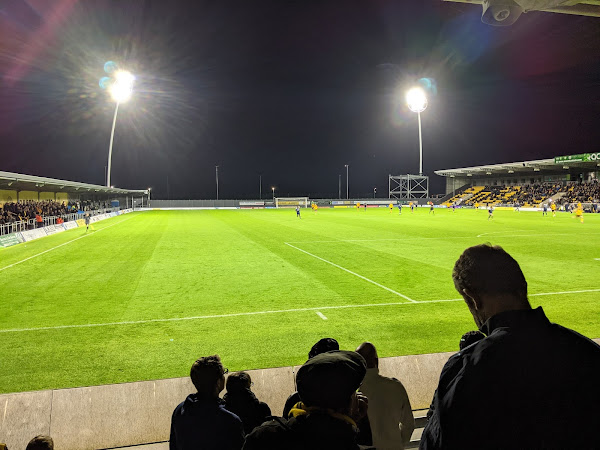