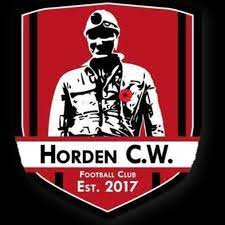 The current club was established in 2017 as an attempt to bring football back to the village that the original club left the previous year to become Darlington 1883 Reserves. The chairman of the original club had claimed that the club would have been dead by Christmas and the move was sanctioned mid-season. They started out in the Durham Alliance Combination but after one season, the league was swallowed up by the Wearside League. The club finished 8th in their first season but their performance was good enough over the two abandoned seasons to see them admitted to the Northern League D2 for this season. So far they are in a mid-table placing of 10th.

The original club, Horden Colliery Welfare were established in 1908. They played in local leagues at first, before joining the North Eastern League in 1935. They were champions here in 1938 and aside from four seasons in the late 1950s and early 1960s where they played in the Midland League and Northern Counties League. They would win the North Eastern League again in 1964 but would leave to return to local football after this latest success. They would resurface in the Wearside League in 1972, winning the title in their first season. The club would make the step up to the Northern League in 1975. Their best finish here was 3rd in 1980 and 1983. By the time of the second finish, the league had expanded to two divisions but this proved to be their undoing in 1985 when they were relegated to the second tier after a second-bottom finish. The first half of the 90s was a tricky time for the club and they finished bottom of the league twice and rarely finished outside of the bottom places. By 2003, they had recovered sufficiently to get back up to Division 1 after finishing as runners-up to Penrith. Horden Colliery Welfare would last here until 2007 when they were relegated back and aside from one season, would remain in the second tier until they were relegated to the Wearside League in 2013. After three mediocre seasons, the local parish council served notice of eviction from the ground for unknown reasons and despite a court appeal, the decision was upheld. With no firm home, the club shared at Hartlepool FC's Grayfields Enclosure. They eventually upped sticks and moved to Darlington to become the National League North side's reserve team. Horden Colliery Welfare reached the FA Cup 2nd Round in 1938, losing 3-2 to Newport County. They would also reach the 1st Round five more times, the latest in 1981 when they narrowly lost 1-0 to Blackpool.

The village of Horden is located near Peterlee in County Durham. It was a mining village from 1926 until 1987 and the loss of jobs hit the village hard. It has a population of 8,500 and its most famous former resident is Bob Taylor, the ace striker who played for Bolton Wanderers, Leeds United, Bristol City and West Bromwich Albion. MY VISIT
I only decided I was going to come here on the Thursday before the game, having already decided my morning game in the Sunderland Over 40s League. I'd whittled it down to eight choices, none of which were an especially simple journey, nor with any amazing pubs en route. I put my dilemma out on Twitter to canvass opinions. In the end, the top 3 all started with H - Horden Colliery Welfare, Heaton Stannington and Hebburn Town. In the end, I realised that I didn't have the luxury of too much time between the games and so I headed to the Wetherspoons site to see if there were any nearby. Horden Colliery Welfare came up with the closest, therefore sealing the deal. It was also the best-looking ground and the only one that was not easily doable from Newcastle, so the decision made even more sense. 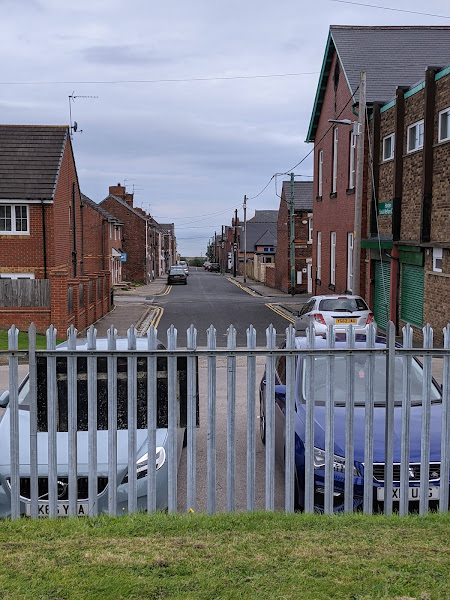 After my morning game in Castletown, I got a bus back into Sunderland. I wanted to visit CEX and Cash Converters in search of a new camera. The former came up trumps and I got my hands on a nice Sony one for £42. I've only had my current one less than a year but its too big and bulky to carry around and the app for transferring photos to your phone is hopeless. I did forget one small detail though - an SD card. I decided to try and lookout for a cheap one until I can get home to get my original out of my current camera. I walked to the interchange and for once my luck was in. I only had to wait 2 minutes for my bus and I was in Peterlee just after 1.40. Time was quite tight and so I headed straight for Wetherspoons number 213. The Five Quarter was fairly average but provided me with a decent pizza and a bottle of Aspalls for around £9. I left the pub at 2.25, walking straight to the ground and getting there at 2.50. It was a fiver to get in and I had a good chat with a hopper I met in Snodland in July whilst watching the game. 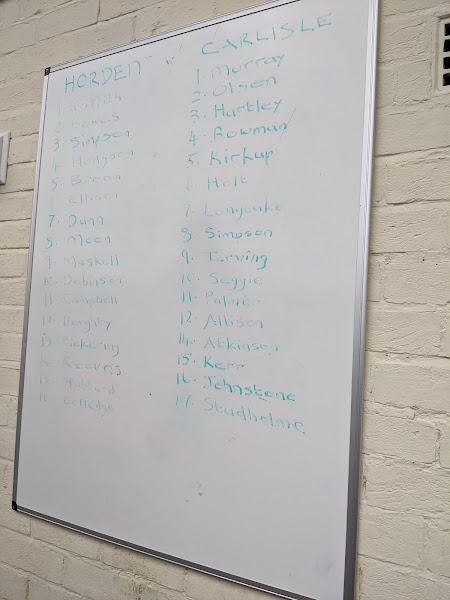 Horden CW were in excellent form, unbeaten in their last seven games. They'd beaten Washington 3-1, won 4-1 at Blyth Town, beaten Bedlington Terrier 1-0, won 1-0 at Redcar Town and beaten Esh Winning 3-0. They'd also drawn 1-1 at Billingham Synthonia and 1-1 against Boldon CA. Carlisle City were in decent form also. In their last five, they had beaten Brandon United 3-1, Sunderland West End 2-1 and Billingham Synthonia 4-2. They'd also drawn 2-2 at Heaton Stannington and lost 2-1 at Jarrow. Horden started strongly but didn't really test the keeper. Carlisle City soon took control though and they took the lead on 28 minutes. A ball was put across and Jordan Irving finished from close range. It was 2-0 on 34 minutes, Jordan Longcake with a lovely curling shot from the edge of the area. Strangely, the club played goal music for the away team goals too, the classic Tom Hark song. Horden finished the half strongly and didn't really deserve to be two behind. On 59 minutes, it was 3-0 to the visitors, a shot from the edge of the area by Jordan Holt. Horden got one back on 70 minutes, David Doughty finishing from six yards out. There was then a hat trick of penalties for the visitors, one for a tug back, one for a trip and one very soft one. They were all successfully converted, two by Irving to complete his hat trick and one by Keighran Kerr to make it 6-1. Horden Community had a few chances and they reduced the arrears on 87 minutes Barney Dobinson with a deflected shot.

It's now 5-1 to Carlisle City. Another penalty. I don't appear to be bringing much luck to the teams I'm visiting this weekend pic.twitter.com/4LV4Wc3dpV

It had been a deserved win for Carlisle City but maybe the margin was a bit harsh on Horden. I left at full time and was in town at Argos by 5.15. It was about the only place that was open and the town was dead. I got the SD card I needed for £6, this will prove useful to get better pictures at Newcastle tomorrow. I then headed to Lidl to get some cans for later and a soft drink. I headed back to the bus station and waited less than five minutes for a bus I was back in Sunderland about 6.30 and with the app indicating that Wetherspoons had replenished the Black Dragon, headed there. They had indeed and it gave me a good chance to have a rest, charge my phone and work up an appetite for dinner. I had a couple of pints as I still wasn't hungry after my first. I still wasn't peckish after the second, so I headed to a pub near my hotel, The Avenue. This wasn't a bad place and I had a pint of Sandford Orchards. But I was hungry now, but all the sit down Indian places were back in town. I couldn't be arsed with that, so just got some salt and chilli chips from a Chinese called Amigos. I was back at my room by 9.30, cans in reserve, waiting for the football highlights and hoping for a good nights sleep. 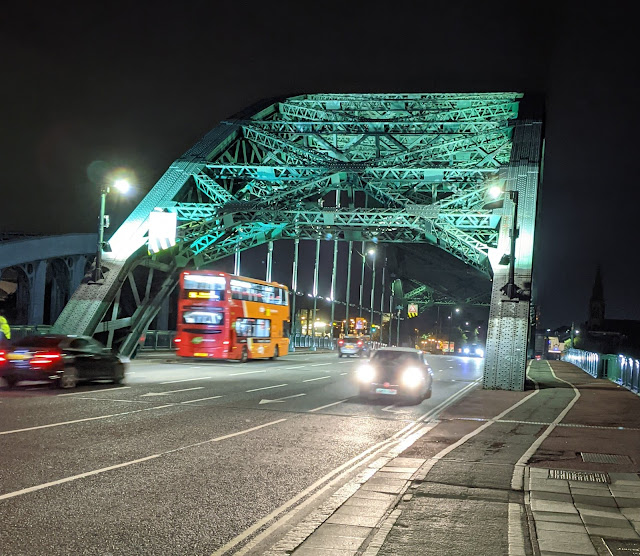 THE GROUND
THE WELFARE GROUND is a delightful venue. The centrepiece of the ground is the main stand, which still looks pretty solid. It's got a leaky roof, hence a lot of seats are covered over but apparently, the council have condemned it and want rid. It'll probably be replaced by some metal monstrosity which is a real shame. The council probably aren't football people so they don't understand the importance of such structures and in my mind, they should have preservation orders on the stand, unless they want to provide something better. In its heyday, it would have held 500 but it must be around 150 today.
The rest of the ground is also great, with plenty of terracing which would give it a capacity of about 3,000. The tea bar at the ground is excellent, although there is no proper clubhouse, only cans. The only merchandise I saw was badges. There's plenty of car parking and the ground is well served by buses. It's a must visit for any serious groundhopper. 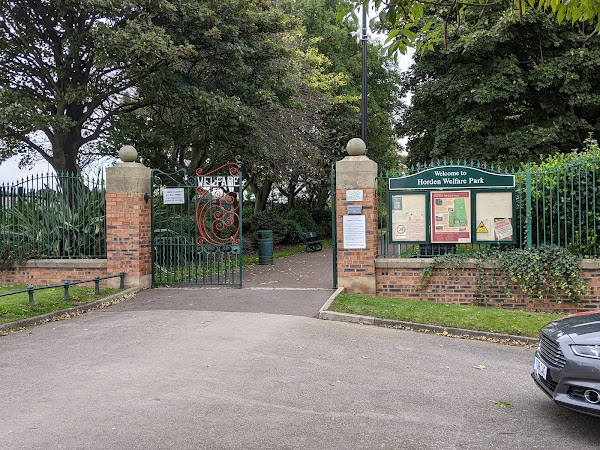 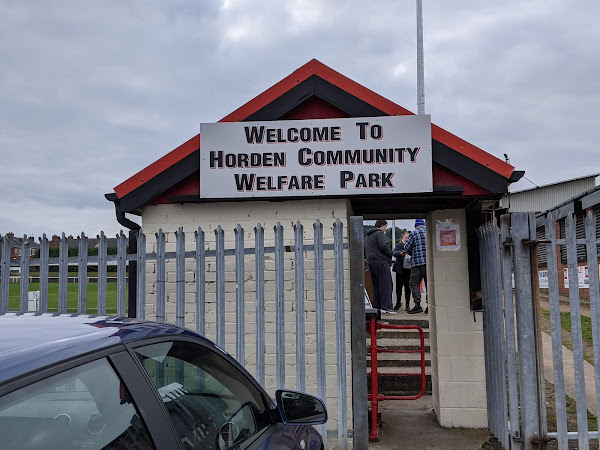 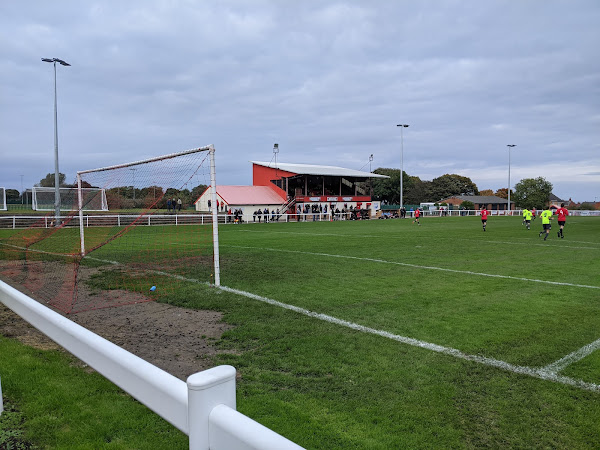 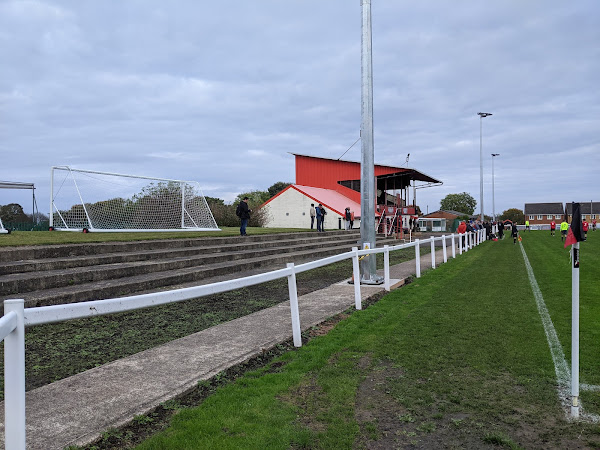 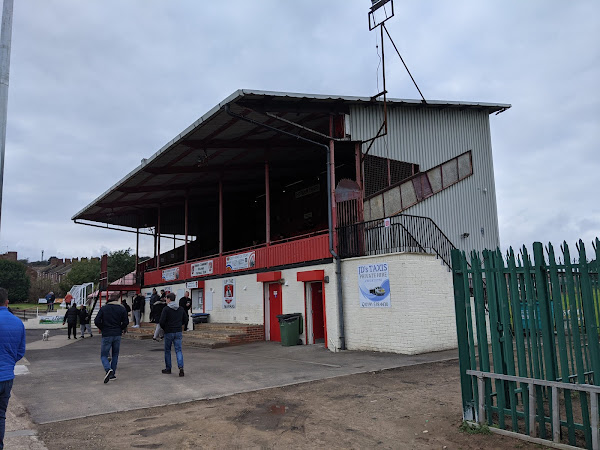 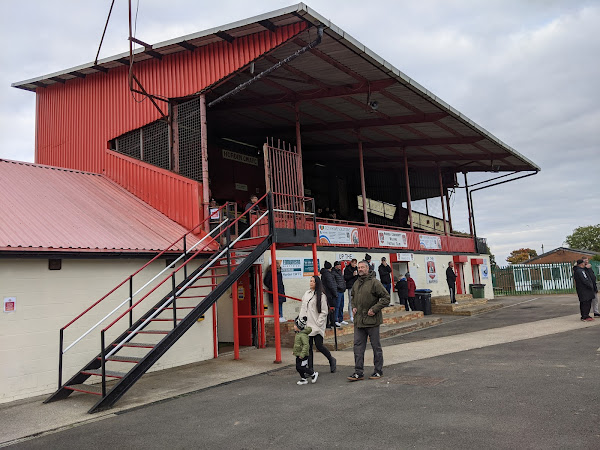 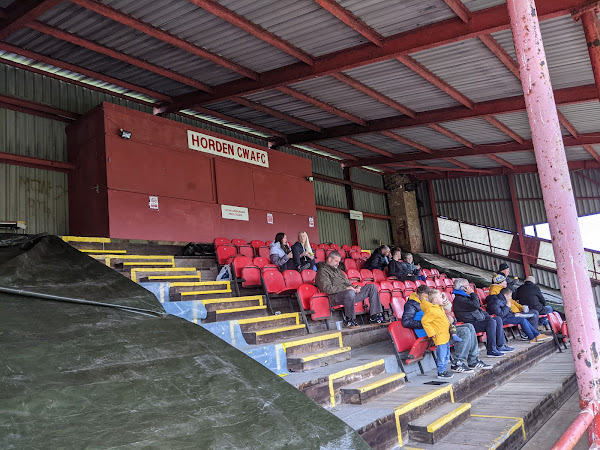 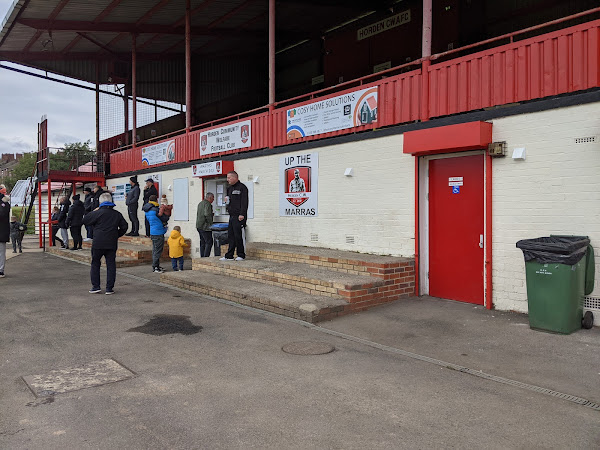 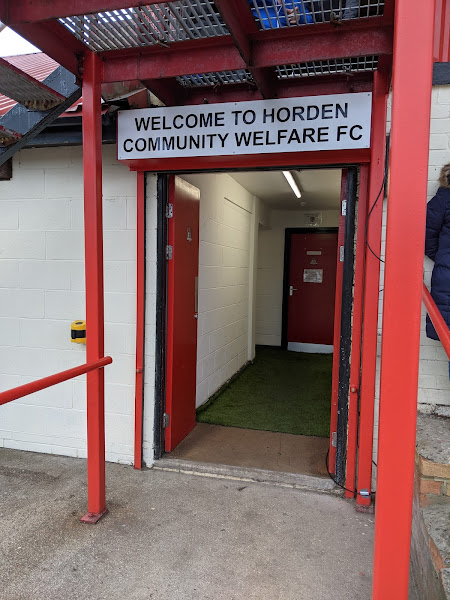 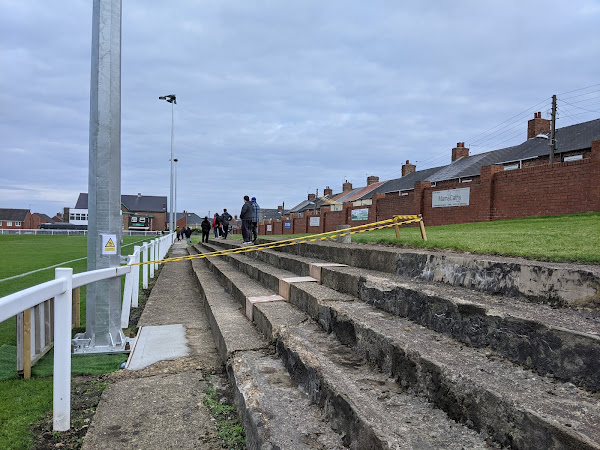 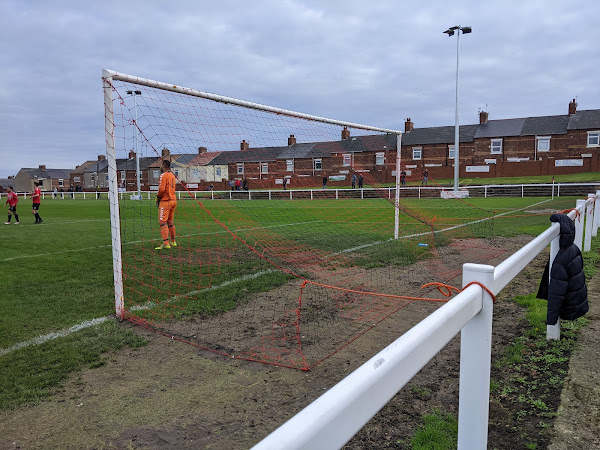 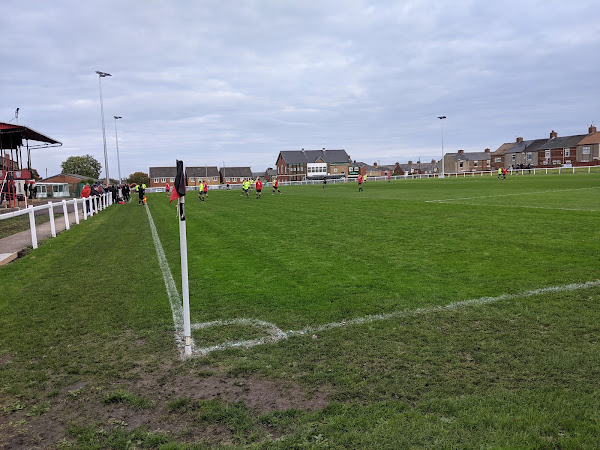 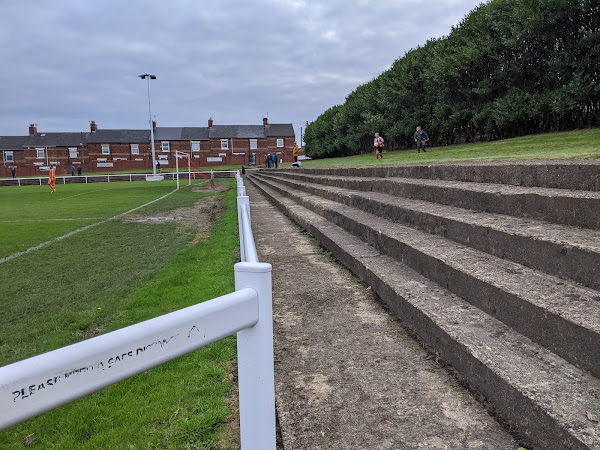 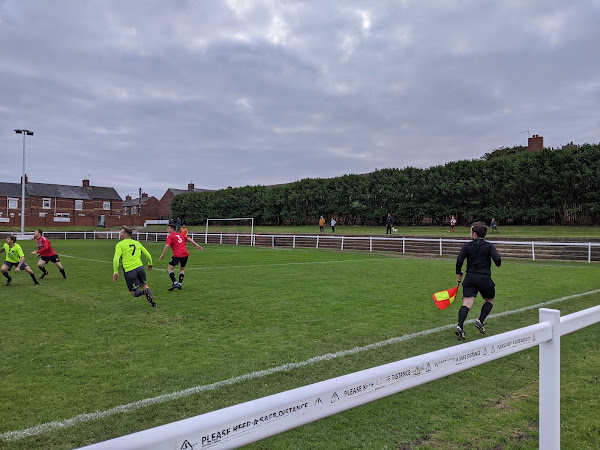 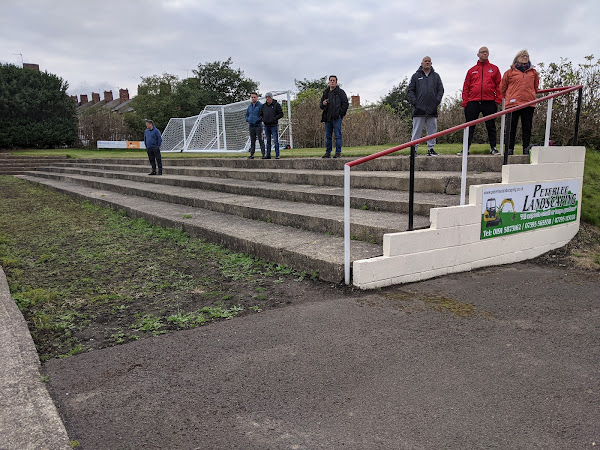 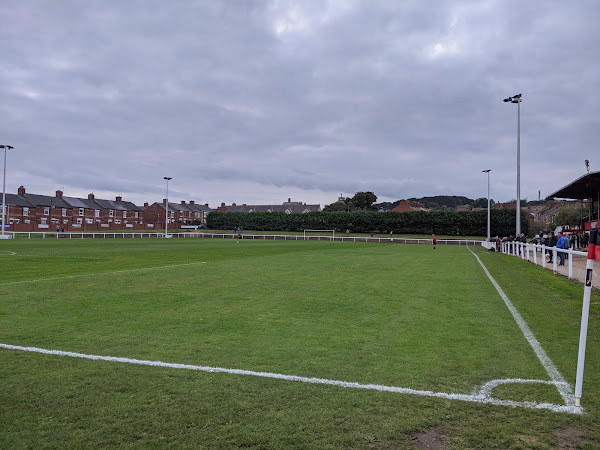 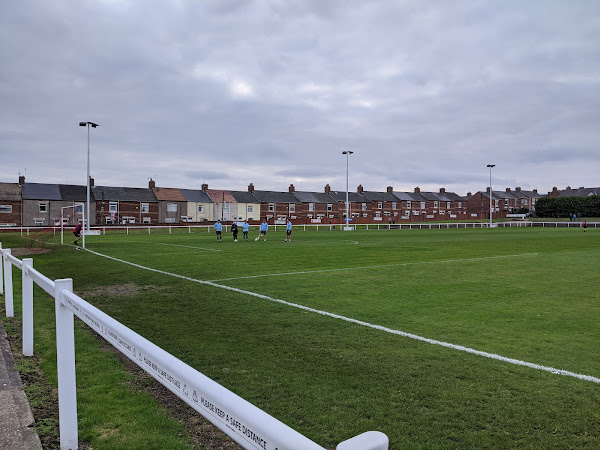