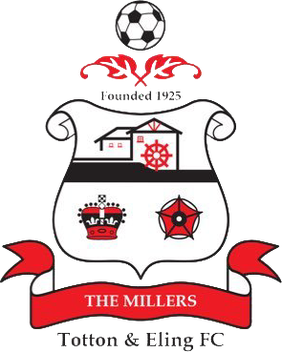 The club was formed in 1925 as Bramtoco, changing its name to BAT Sports in 1971 and then Totton & Eling in 2007. The reason for the first two names was that they were established by the workers of the British American Tobacco company. After 50 years of playing local football, they joined the Hampshire League in 1975. Playing in both tiers of the league, they were Division 1 champions in 1988 and 1989, after which they moved to the Wessex League. Whilst the league was a singular division, finishes ranged from 3rd in their debut season to 19th in 1997.  Multiple divisions were added in 2004 and the club remained in the top tier until 2007 when they were demoted two leagues due to the loss of their ground. After finishing 5th in Division 2 and with a new ground on the way, they rejoined Division 1 in 2007.  They won the league, losing just once all season in 2009, gaining promotion to the Premier Division. Despite an excellent 7th place finish in their debut season, they couldn't build on this and in 2015 were relegated after finishing second-bottom. Since then, they've been struggling in Division 1 and this season has been no exception with them 15th at the time of the game.

The best progress in the FA Cup has been the 1st Qualifying Round, a stage reached on six occasions. The latest of these came in 2012 when they beat Fleet Spurs and Hamble before taking Southern Premier side Weymouth to a replay, losing 3-0 after gaining a 2-2 draw at home. The FA Vase 3rd Round has twice been reached, the latter in 2004 saw them face AFC Wimbledon, a 'home' tie that was switched to Kingsmeadow and drew a 3,000 crowd with BAT Sports narrowly losing 1-0. Local cup wins include the Hampshire Intermediate Cup in 1938, the Russell Cotes Cup in 1990 and 2010 and the Southampton Senior Cup in 1976 and 1989. The town of Totton & Eling has a population of around 29,000 and is made up of several smaller villages. Totton & Eling share the area with Southern League side AFC Totton with their stadium being adjacent. There's also a successful cricket club and a rugby club that is based at the local college. 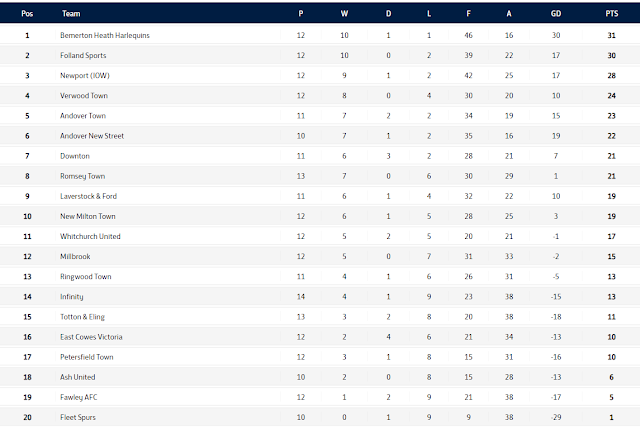 MY VISIT
Totton & Eling had been a long term target for me, as they had been down as a Friday night game a few times. However, the weather had always thwarted things due to them not having the greatest pitch. I think it had been two failed attempts, the latest had been for an October 2019 game against Ringwood Town. I love a bit of Friday night football and so do other hoppers it would appear, looking at the vastly increased attendances. It was just a shame that after Totton & Eling made the effort to stage a game, the weather had other ideas. It looked as if the same would be the case for this visit - when I looked on Thursday there was rain on and off up until 1 PM. At least this gave them time to call off the match before I left, to save a wasted journey. This was something that they had been excellent about on my two aborted attempts, making sure people knew early. I was keen to see any game on this night, so had revisits at Canterbury City (Faversham Town) and Britwell (Burnham) in reserve. 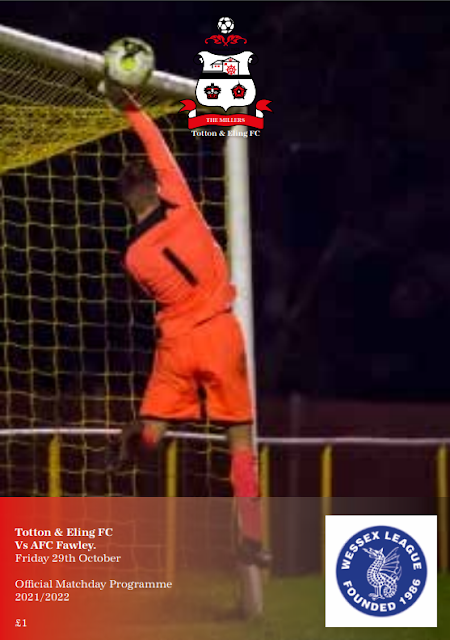 The day of the game came and I hadn't been getting the greatest nights sleep again. It was a busy day at work, as per usual for a Friday but I still got out at 3. I'd sold my old camera overnight, making a small profit on it which was a bonus. I wanted to get the label printed so that I could send it ASAP, so that took up most of the half an hour I had at home before leaving. It was all a bit of a rush, with me also getting ready for an early start for a train trip to Bexhill tomorrow. I left just after 4, stopping at Tesco to drop off the parcel. I picked Colin up at 4.30 and we were soon on our way. It was not as easy as Tuesday, journey wise. Due to the M3 being knackered, we had to come off at Basingstoke and go through the back end of beyond. We were in Totton at 6.30 and had a decent range of takeaways to choose from. There were 3 Chinese so I went for the New Happy Palace for salt and chilli chicken wings and salt and pepper chips. Both were excellent and portions were huge, though they did take a while to come with it being Friday night. We eat them back at the car, getting to the ground at 7.20. Entry was £6 and I'd downloaded the programme earlier. There were a few groundhoppers in Attendance and I recognised several familiar faces. 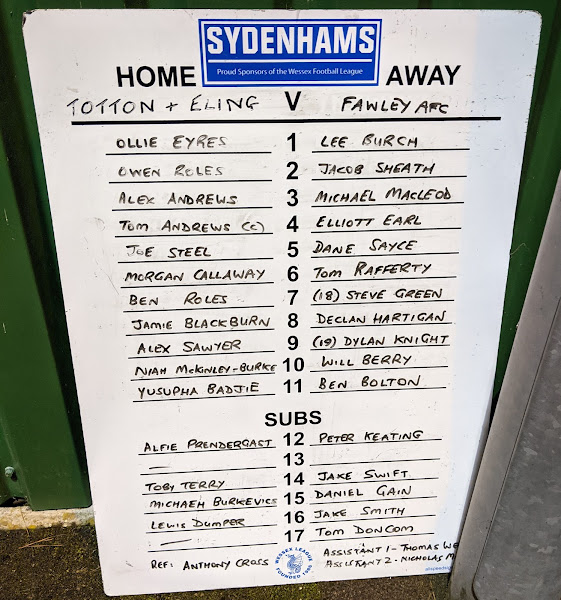 Totton & Eling had been in mixed form recently. They'd beaten Infinity 5-1 in their last game and also overcome New Milton Town 3-1. However, they had lost 6-0 to Bemerton Heath Harlequins recently as well as a 3-1 defeat at Downton and a 2-1 loss at Verwood Town. Fawley's only win in the last five had come against the bottom side Fleet Spurs as they triumphed 4-2. They'd lost 3-2 against Newport IOW, 3-0 against Verwood Town, 3-1 against Andover New Street and 4-0 at Laverstock & Ford. Totton and Eling were edging the game and had a goal disallowed for offside. But it was Fawley that took the lead on 33 minutes. It looked like the home keeper failed to gather the ball on the deck and Dylan Knight was on hand to put in the rebound. On 52 minutes it was 1-1, Yusuphe Badjie putting home across. He had been excellent all night and deserved the goal but the goal disrupted the game and the play became a bit wayward, at least in terms of clear-cut chances. On 79 minutes, the hosts took the lead, Alex Sawyer finishing from 10 yards following a ball into the box. It was all square on 85 minutes, Knight heading home a right-wing cross from around five yards out. Fawley looked the most likely to get a winner but in the end, there were no further goals. The game finished bang on 9.30 and five minutes later, we were away. I needed to stop for petrol at ASDA in Eastleigh but I dropped Colin off at 11.20 and got home 20 minutes later. I typed my blog whilst having a drink or two, my target being getting to sleep by 1.20 so that I could have six hours of sleep before my morning alarm. 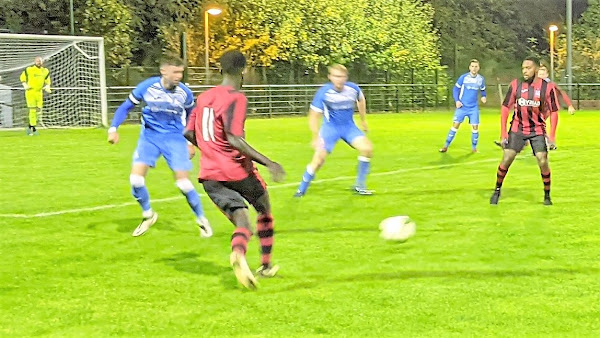 THE GROUND
MILLER PARK is a nice venue for step 6. The stand is large, holding around 300 on a mixture of benches and seats. There's also a further covered terrace behind the goal holding 100 and further cover under an overhang for another 20. The rest of the ground is open hard standing. There's a basic tea bar at the ground and I believe they make use of the AFC Totton bar if you fancy a drink. They also share a car park with their adjacent neighbours and there is a kebab van nearby. Otherwise, the town is a mile away and is reasonably well served by local bus routes. 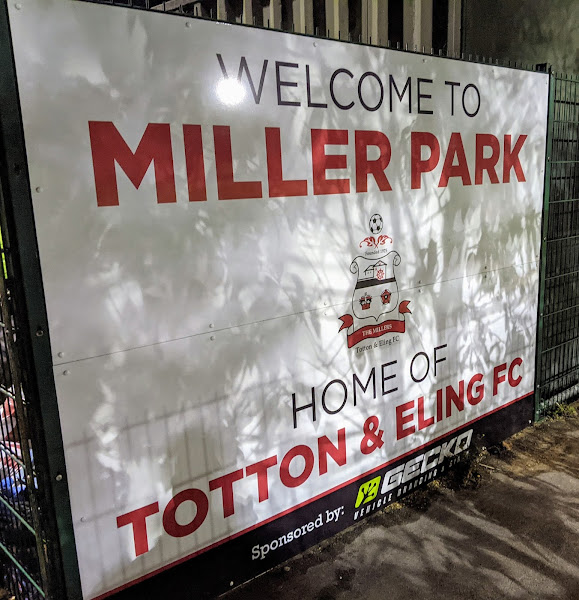 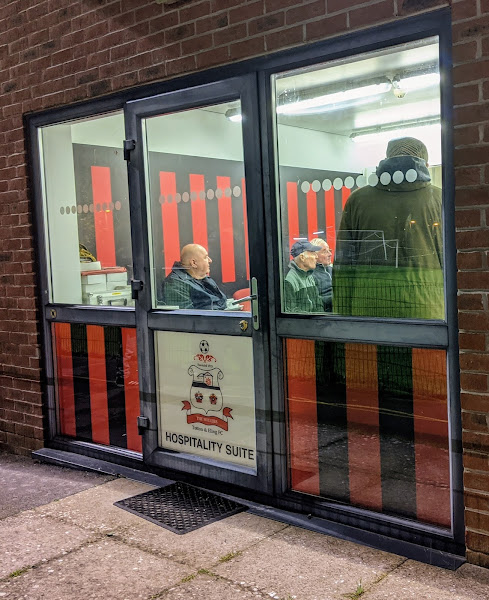 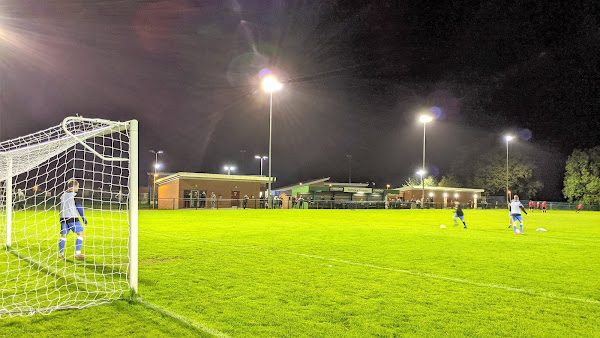 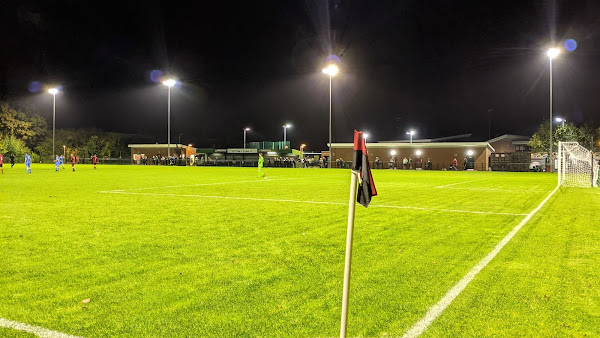 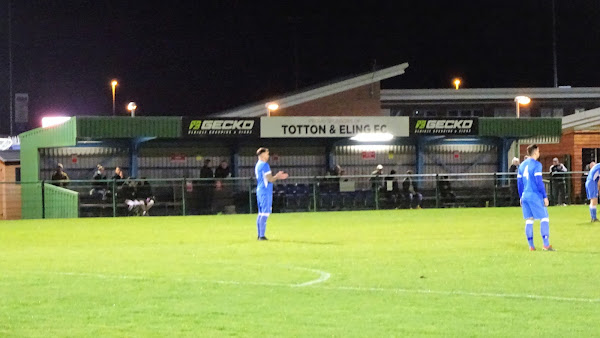 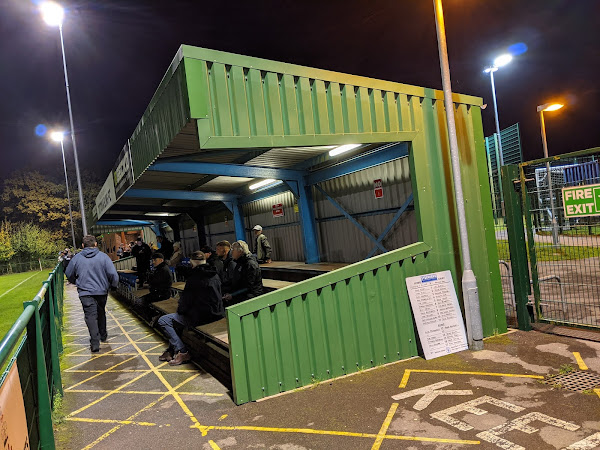 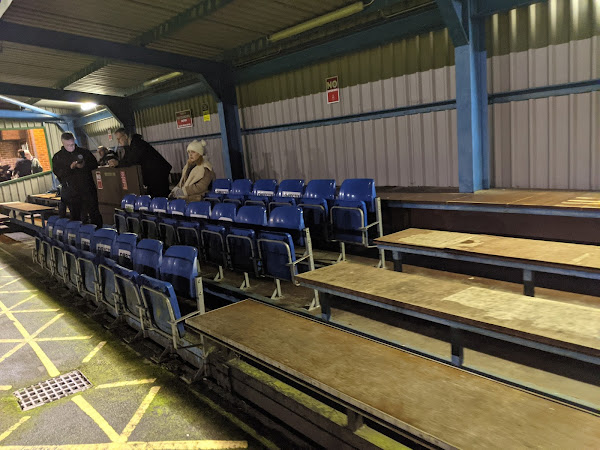 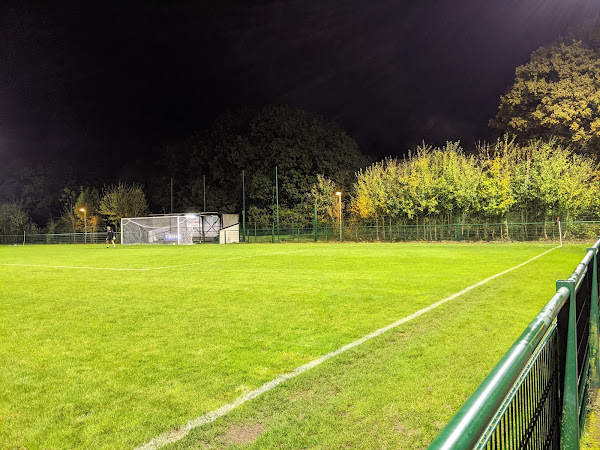 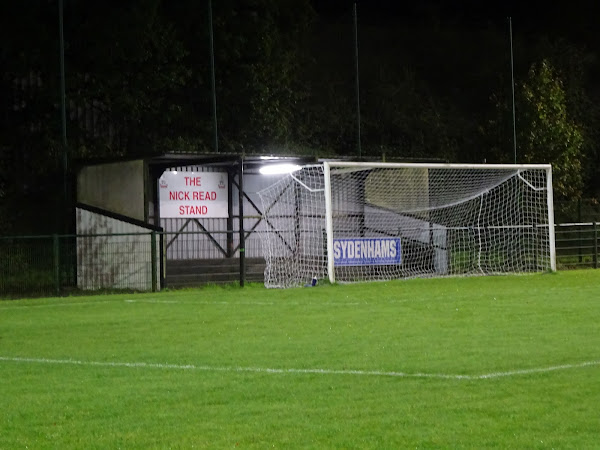 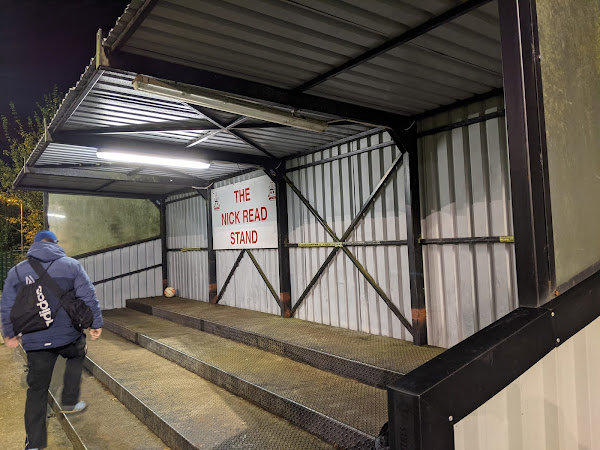 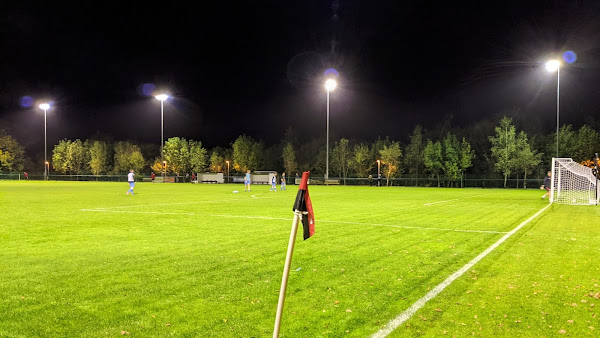 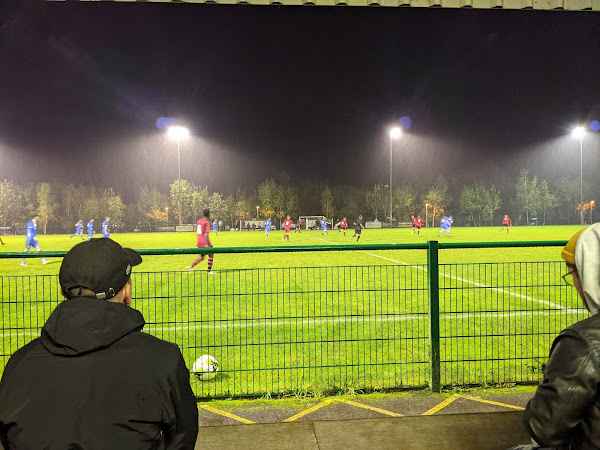