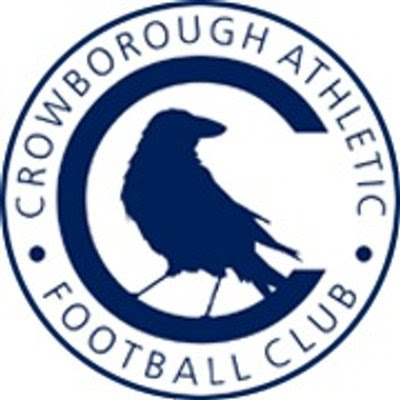 The club was established in 1894 and initially played in local leagues in the Tunbridge Wells and Crowborough areas. After much success, they made the step up to the Sussex County League in 1974. They joined Division 2 but despite a 4th place finish in their debut season, they generally struggled and were relegated to Division 3 in 1984. Three seasons were spent here until they bounced back as runners-up to Langney Sports (now known as Eastbourne Borough). They fared slightly better at Division 2 level this time and were champions in 1993. Three seasons were spent in Division 1 (with 1994/95 seeing technically their best-ever finish of 14th at step 4) before they were relegated back and the next nine seasons were spent yo-yo-ing between Division 2 and Division 3. By 2005, Crowborough Athletic were back in Division 1 and in 2008 they were champions. They spent a single season in the Isthmian D1 South, being relegated straight back from whence they came. They generally struggled back in the Sussex County Division 1 and in 2014/15 they were switched to the Southern Counties East League due to geographical reorganisation. 2016/17 saw Crowborough Athletic finish as runners-up to Ashford United, missing out on promotion back to the Isthmian League by a couple of points. Before the season was declared null and void back in March, the team sat in a disappointing second-bottom place.

Crowborough Athletic's best-ever FA Cup run came in 2008 when they beat Ringmer, Walton Casuals and Leighton Town before a defeat to Harlow Town after a replay saw them exit in the 3rd Qualifying Round. The club has twice reached the FA Vase 5th Round losing 2-0 to Kirkham & Wesham in 2008 and 6-3 to Coleshill Town in 2017, The club's only season in the FA Trophy in 2008 saw them reach the 1st Qualifying Round - beating Eastbourne Town 3-0 before a 2-0 defeat against Northwood. In terms of local competitions, Crowborough Athletic have won the SCFL John O'Hara Cup in 2007, the SCFL Division 2 Cup in 1978, the SCFL Division 3 cup in 2002 & 2004 and the Mid Sussex Charity Cup in 1952 and 1954. The town of Crowborough has a population of just over 20,000. Famous people who have in the town include Doctor Who's Tom Baker, David Jason - most famous as Delboy in Only Fools & Horses. singer Kerry Katona and celebrity cleaner Kim Woodburn. They share the town with another team, Jarvis Brook who play a couple of levels below in the Southern Combination Division 2. The town is twinned with Montargis in France and Horwich in Lancashire. The latter occurred in April 1990 and was the first time in history that two English towns have been twinned with each other. 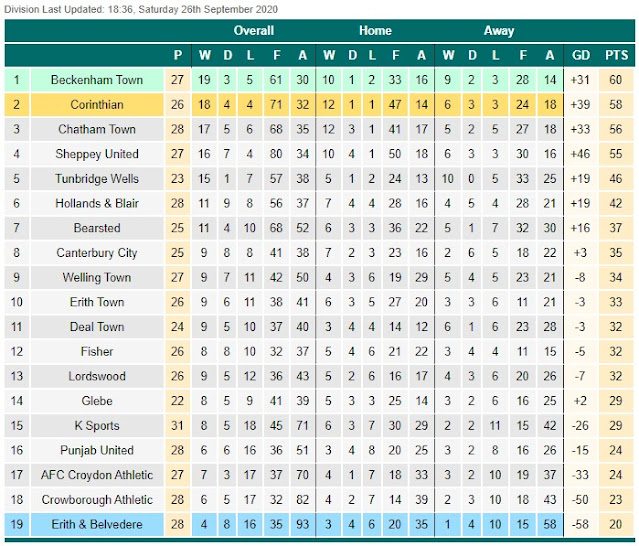 MY VISIT
I'd had a couple of days rest after my marathon ten games in nine days on my week off and so was keen to get my usual dose of Tuesday night football. Luckily, fellow hopper Anwar was keen to come along and so I presented him with a list of possibilities and he picked out the game at Crowborough Athletic. That was fine by me, it was one of the better grounds - I'd been there to take photos sometime around 2008, though the date on the photos didn't make sense, neither did a cross-reference with the Wycombe fixture for that season and couldn't find a possible match of what game I may have taken them on the way to. I did my usual research into the club's history and also searched for potential places for our pre-match meal. The day of the game came and I had a good lie-in waking at 9 am. A couple of bits of bonkers news were doing the rounds in the football world - firstly Kings Lynn Town charging £15 for a programme with a £3.50 cover price for their game against Yeovil effectively charging £11.50 postage. Despite the ludicrous mark-up, you can hardly blame clubs for trying to cash in when later on the FA carried on trying to kid everyone that clubs in the Conference North & South are 'elite'. With all due respect to the likes of Curzon Ashton & Leamington from the North and Chippenham Town and Hugerford from the North, great clubs though they are, they are more aligned to step 3 of non-league than they are to Liverpool and Manchester United. To compound the idiocy, the FA decreed that though step 3 and below clubs are allowed to host FA Cup games, away fans are banned. From an organisation that claims to be against discrimination, it's a ludicrous decision. It's one bonkers ruling after another with the FA, though the shower of charlatans in government have a lot to do with it too. I left at 3.50,meeting Anwar at 4.15. Amazingly, the M25 gave us a hassle free journey and the only place with delays was East Grinstead with their 'Pop Up Covid 19 Cycle Lanes'. The last part of the journey was through country lanes and we were at the Nee How Chinese takeaway by 6.20. I had my usual of salt and pepper chips which were £3.50 and fairly average. It was only a couple of minutes drive to the ground from there and so we sat in the car for a while before going in around 7. Admission was £8, slightly above average but it was a great ground for the level. I got some pictures of the ground before settling on a spot on the far side near the dugouts. 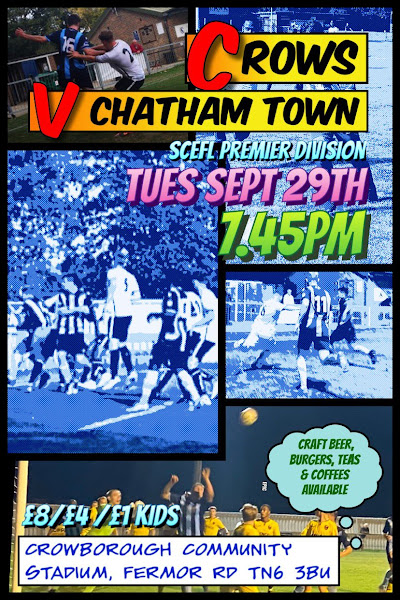 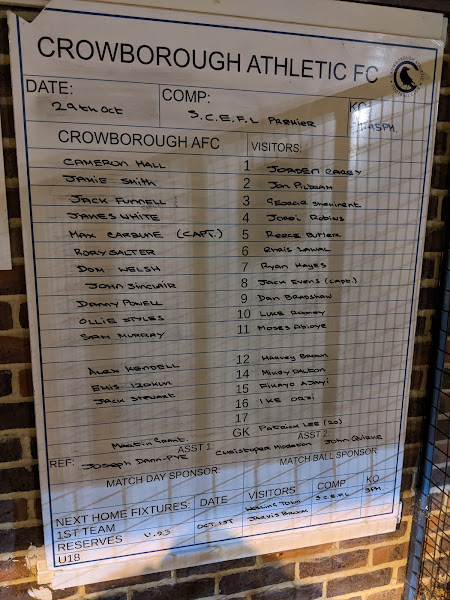 At the time of the game, hosts Crowborough Athletic were sitting in a mid-table position of 13th. In the league, they'd won 5-2 at Tower Hamlets, drawn 0-0 against Fisher and 1-1 against K Sports and lost 2-0 at Hollands & Blair and 3-2 at Erith Town, Chatham Town were in 2nd and had enjoyed a blistering start to the season with home wins against Punjab United (5-0) and Tower Hamlets (6-1) as well as victories on the road at Erith & Belvedere (4-3) and Bearsted (5-2). With a 100% record and the top scorers with 20 goals in the league so far, they were big favourites going into tonight's clash. Inded, they were on the front foot and were ahead after a couple of minutes, a cross was whipped in from the left and Dan Bradshaw headed in from a few yards out. Crowborough had not been out of their half at this point and had barely been in the final third when the lead was doubled on 6 minutes. It was a good move down the left and then a 20-yard shot from a tight angle by Ryan Hayes that gave Chatham a commanding lead. The game was as good as over on 17 minutes and Crowborough only had themselves to blame. Two defenders were caught ball watching and Bradshaw took advantage, getting his second, nipping in and rounding the keeper. The hosts had a good spell just before half time, forcing a goalline clearance and a good save from Chatham goalkeeper Jordan Carey. The visitors were still dangerous on the break and on the stroke of half time, they were awarded a penalty. It was a decent effort but Crowborough keeper Cameron Hall dived full stretch to make a great save. It was 4-0 on 55 minutes, a corner was curled in from the right and George Shemiant headed home. Chatham made it 5-0 on 80 minutes, a ball was squared from the left and Harvey Brown finished from a few yards out. The final goal came on 86 minutes, Bradshaw completing his hat trick when he followed up a shot that was parried by the keeper. 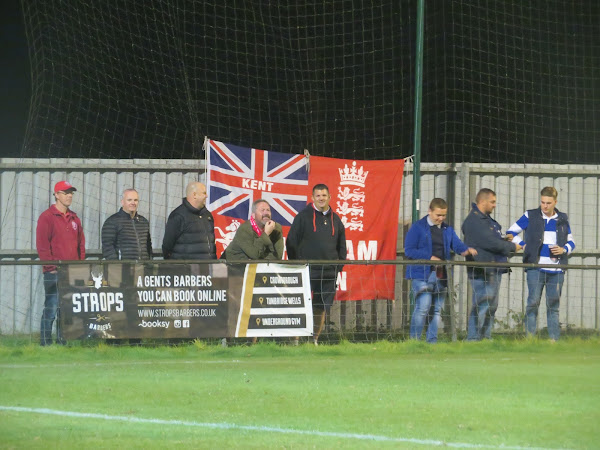 We chatted to a couple of Crowborough fans during the evening including one who did a bit of groundhopping and everyone was really friendly. The Chatham fans were in good voice as we left as they had been all night. They had good reason to be happy, keeping their 100% record going and dominating from start to finish. Of course, it was only down to Tracey Crouch, the local MP for the Chatham area. Back in August, she got behind the #LetFansIn campaign, forcing the government to re-issue guidance that they'd earlier sent. This led to the FA actually reading the guidance and realising that non-elite fans were allowed in all along. She was still trying to press for the rest of non-league to have fans but the FA's refusal to drop the 'elite' tag meant that the government were still banning them. There was at least reassurance that the clubs would be given financial help to compensate for lack of fans. However, it's still no help for supporters, whose mental; health will suffer without their usual football fix to look forward to at the end of the week. We left at 9.40, listening to the Carabao Cup game as Spurs beat Chelsea on penalties. We then switched to Union Jack for the rest of the country but the first 30 miles were on mickey-mouse roads with it taking an hour. The rest of the journey was decent with only the occasional roadworks slowing us down. I dropped Anwar off at 11.30, getting home myself twenty minutes later. I went straight to bed, but couldn't get to sleep for a couple of hours. It meant that I was tired the next morning, but I coped by having a catchup the following afternoon. Hopefully, my body clock will get back to work mode soon. The current plan for Saturday is a trip to Witney & District League side Carterton, though inclement weather may force a change of plan. 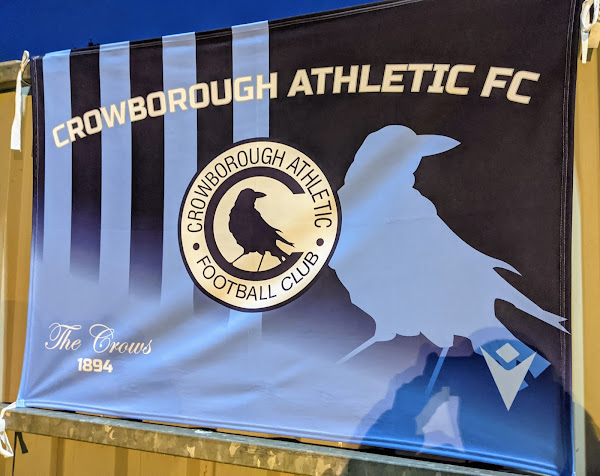 THE GROUND
THE CROWBOROUGH COMMUNITY STADIUM is a decent setup for the level. There are three small stands on one side with seating for around 150 and standing for 50. Behind the goal is covered standing for around 350. The rest of the ground is open standing with a total capacity of around 2000. There's an outside bar with a reasonable selection including local ales. There's also a tea bar with a decent selection at reasonable prices. The Nee How Chinese takeaway and fish and chip shop is 10 minutes walk away, right next to a pub. Everything is really well kept and the club are nice and friendly, so it's well worth a visit. 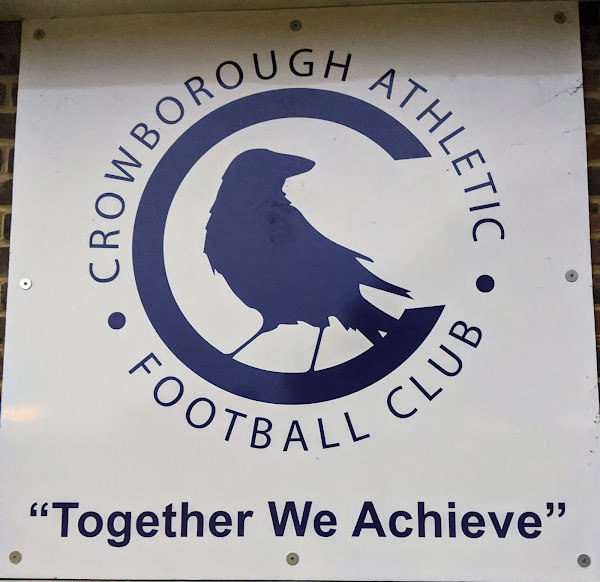 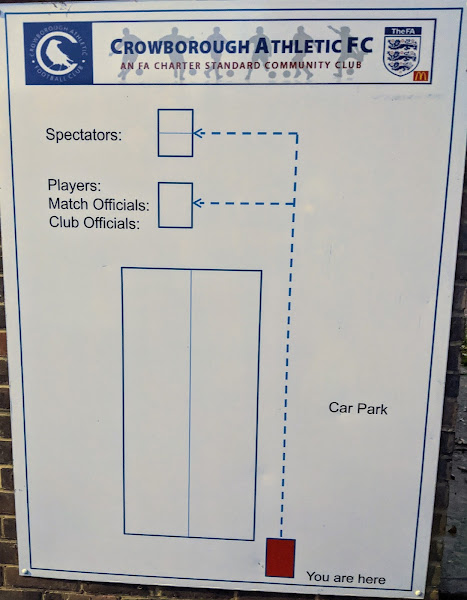 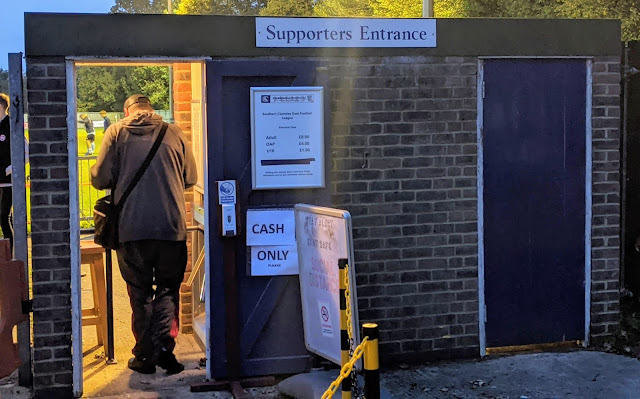 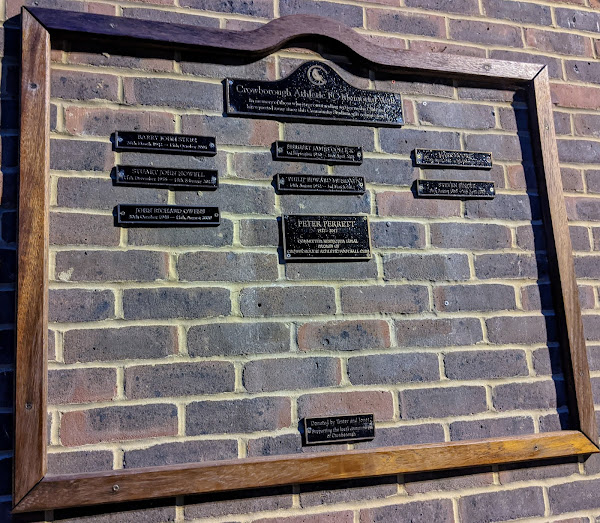 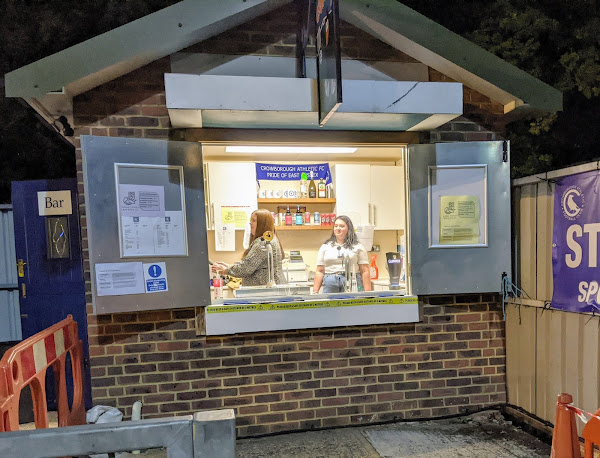 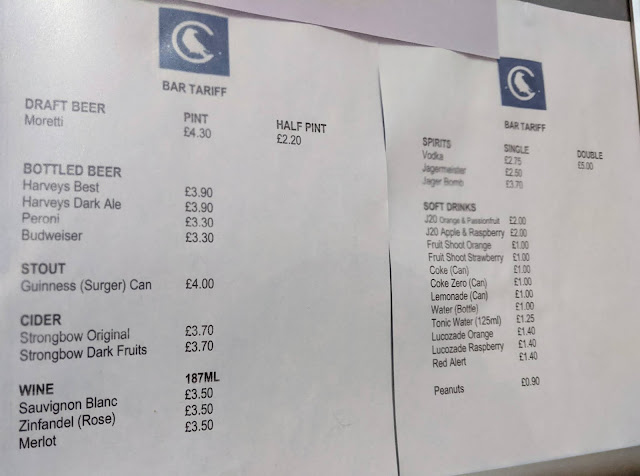 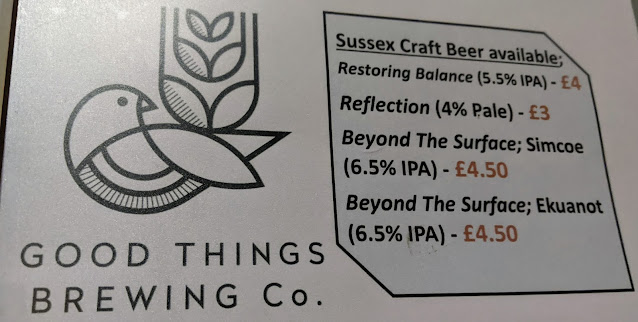 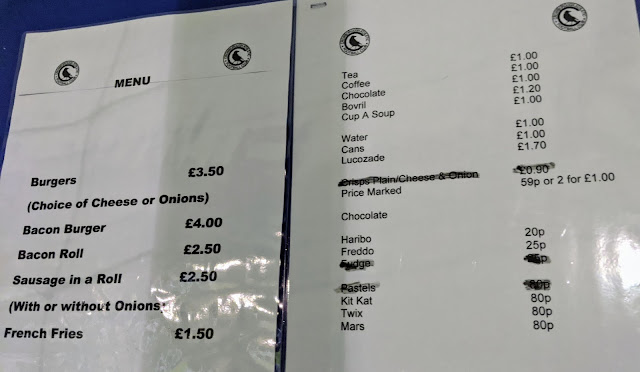 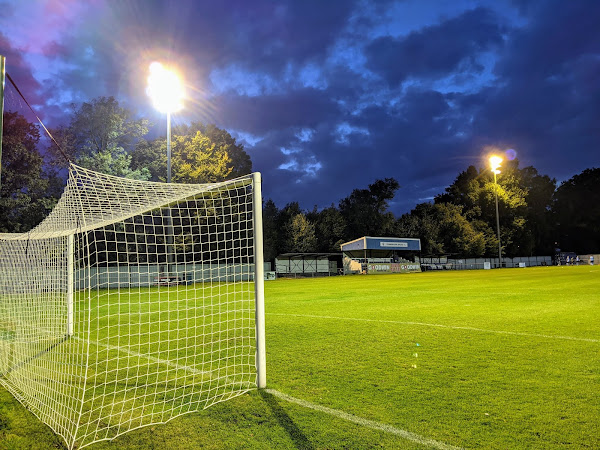 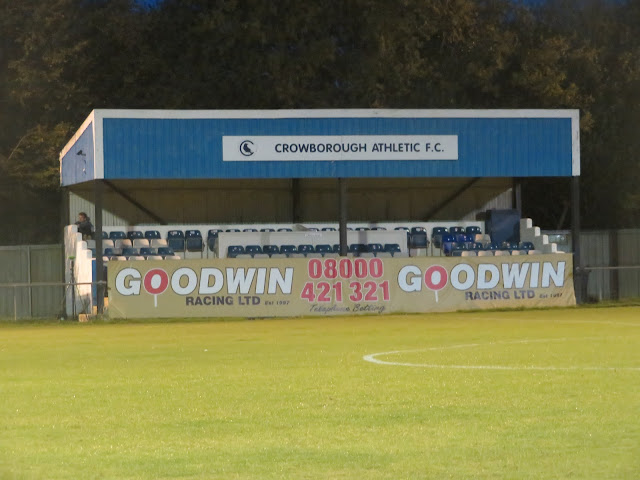 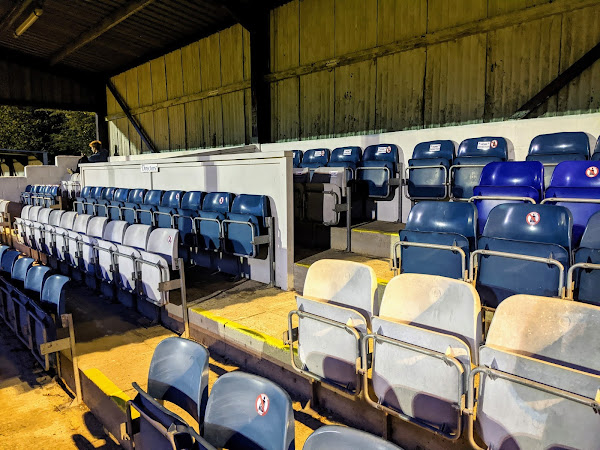 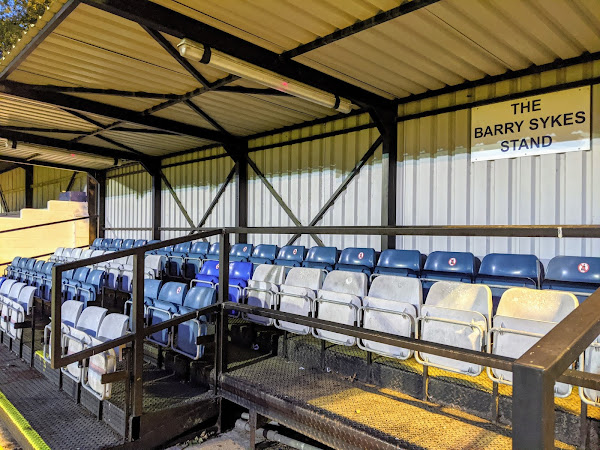 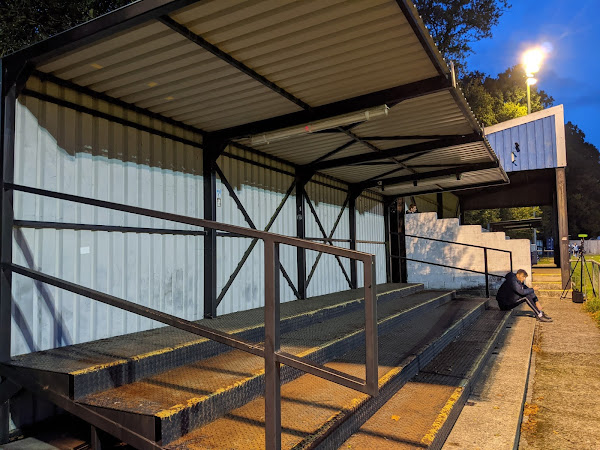 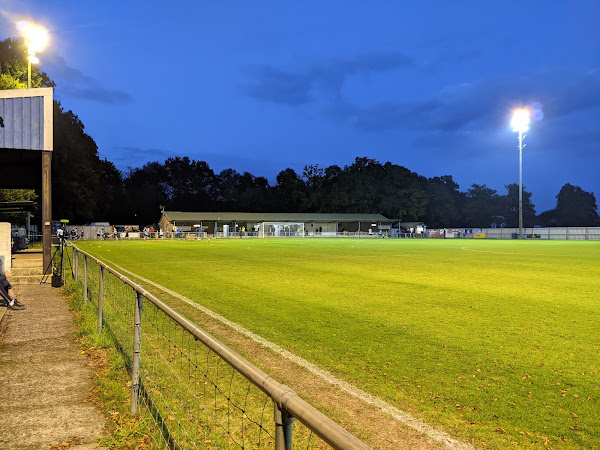 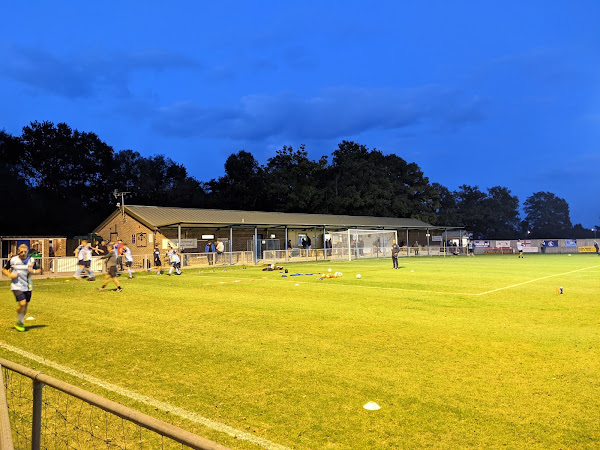 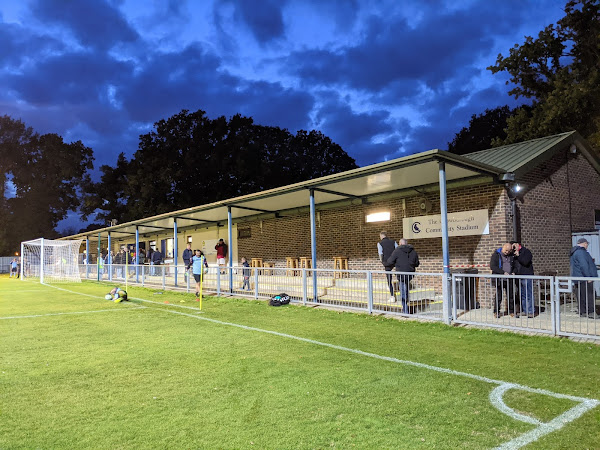 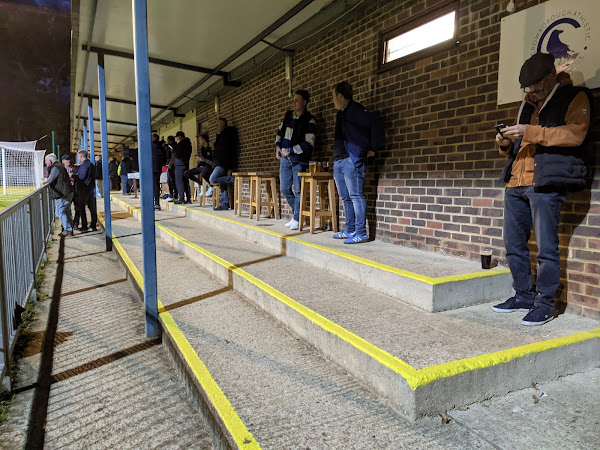 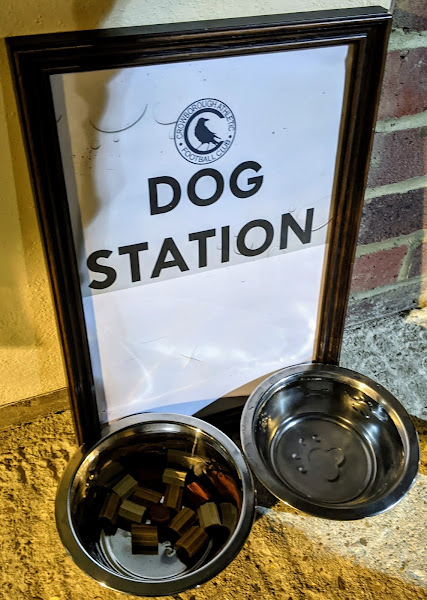 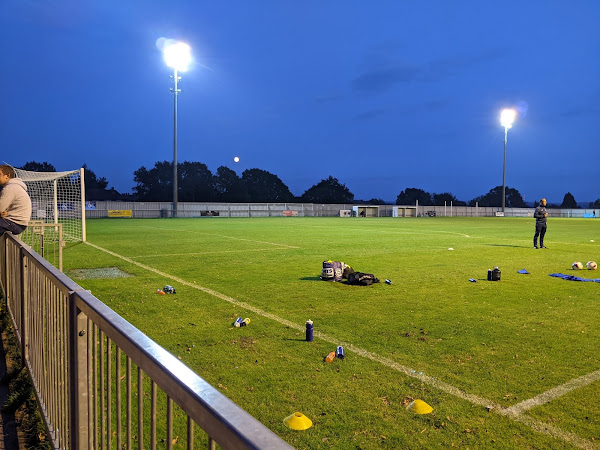 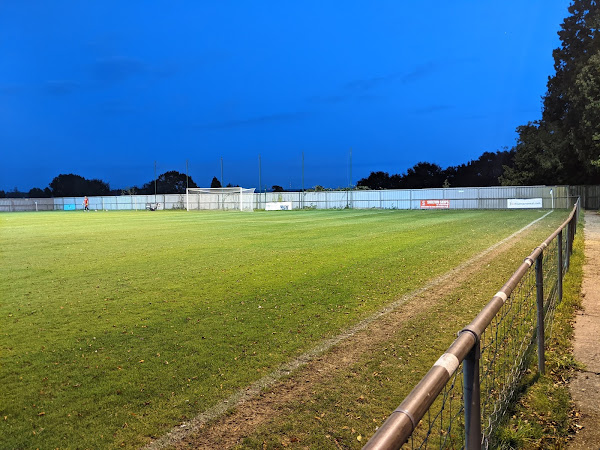 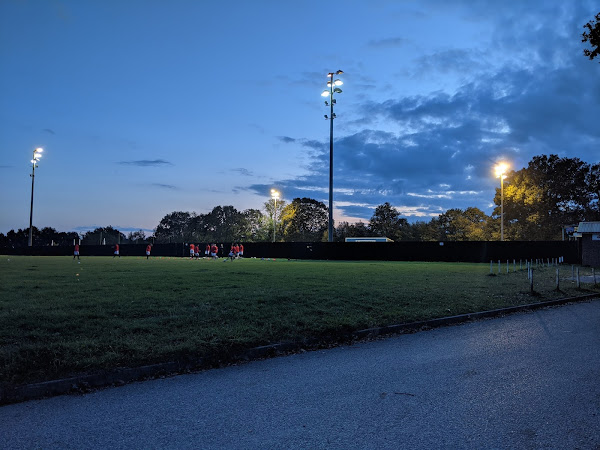