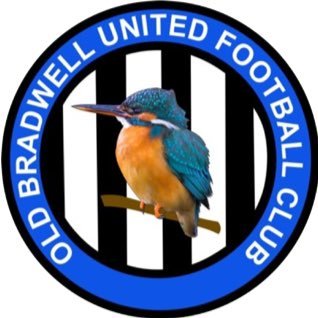 The club was established in the late 1920s and joined the North Bucks League in 1930. They struggled at first, finishing bottom in their first season and suffering relegation from Division 1 a few seasons later. They were Division 2 champions in 1938 before the war interrupted proceedings. They remained in the league on and off for several years, winning Division 1 (now the league's second-tier) in 1978 to secure promotion to the Premier Division. They remained here until 1995 when after finishing as runners-up they joined the South Midlands League. Starting in Division 1, they had a decent finish of 5th in 1997 before the league merged with the Spartan League to create the Spartan South Midlands League. Due to their basic facilities and lack of floodlights, they've remained in the bottom tier (known as Division 2 since 2001) for the entirety of their stay. They finished as runners-up to Bovingdon in 2019 which was the best in their history. Before the season was abandoned in March, they were leading the league with five games in hand on 2nd placed Pitstone & Ivinghoe.

The club has never entered the FA Cup or FA Vase due to lack of facilities but they have won a number of local cups. These include the Buckingham Junior Charity Cup and North Bucks League Cup on several occasions. They also won the Berks & Bucks Junior Cup in 1995 & the Berks & Bucks Senior Trophy and the Spartan South Midlands Division 2 Trophy in 2019. The team is based in Bradwell, a suburb of Milton Keynes with a population of around 9,600. 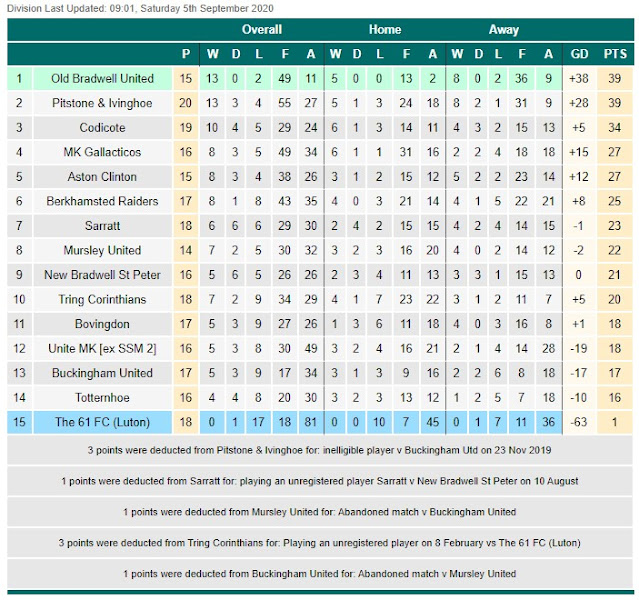 MY VISIT
When I was looking for a game this Saturday, I fancied staying local as I was doing a lot of travelling in the days after. Fellow hopper Anwar concurred and we chose the game at Old Bradwell United over the one at Sandridge Rovers. I'd had a late night on Friday, after getting in from Fawley and writing my blog, so I didn't get up until 9 am. I finally got round to doing my 'Salt & Chilli Chips League' spreadsheet with my local 'Peking House' in High Wycombe taking the lead out of the first five surveyed due to great value and service. I had a shower before getting dressed and spent the rest of the morning at home, starting some of my blogs for my upcoming week in Devon & Cornwall. After catching up on a few other bits and having lunch, I left at 1.15, meeting Anwar half an hour later. It was a good journey over, though there wasn't a huge amount of parking available. Eventually, a space on a nearby road was found and we were pitchside by 2.30. I caught up online and got some pictures of the ground before kick-off. 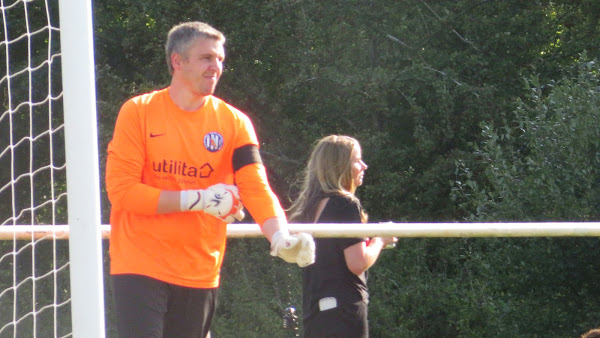 In pre-season, Old Bradwell had enjoyed some good results with wins over Bugbrooke St Michael (3-2), Crawley Green (5-1), Amersham Town (5-2) & Cranfield United (5-1). They drew with MK Irish (2-2) and Risborough Rangers (2-2) as well as defeats to Newport Pagnell Town (0-1), Eynesbury Rovers (1-4) and Buckingham Athletic (1-2). Sarratt had played fewer games that I could see with wins over Harpenden Town (1-0) and Mill End Sports (5-2) but a 5-0 defeat to Leverstock Green. The hosts started well on top and as early as the second minute Ben Green shot into the keeper's arms from close range. They took the lead on 7 minutes when Valentine was fouled in the area and Daryl Smith converted the penalty. The rest of the half saw Old Bradwell on top without really threatening, Green had another good chance, getting away from the defence but he fired wide of the left-hand post with only the keeper to beat. On 54 minutes it was 2-0 when Green got on the scoresheet when he cut inside and fired into the bottom left-hand corner. Old Bradwell got their third on 62 minutes, this time on the break as Toby Cribb finished with a low shot after a good through ball. On 70 minutes, the scoring was complete, a free-kick was headed back and Cribb finished from close range. The hosts could have made it five around ten minutes from time when the Sarratt keeper miskicked but the shot from 30 yards hit the bar. 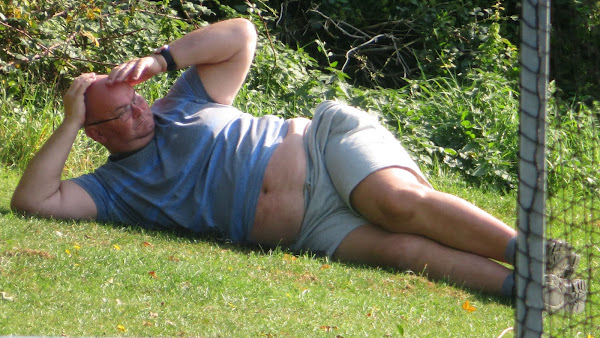 Whilst all this had been going on Wycombe had been getting pummeled 5-0 at Blackburn and along with all the Coronavirus bad news, it was not the happiest of Saturdays. As for the game I attended, 52 were there including a decent amount from Sarratt. The visitors were disappointing with Old Bradwell United never really having to get out of second gear to win the game and having seen them before, I know they can do better. We left at 4.55 and drove back to Aylesbury. We stopped at Farmfoods where I got some Scotch Pies amongst other things. I dropped Anwar off at 5.50 and was home by 6.15. I had a great Chicken Dhansak for dinner before typing this blog. The rest of the evening consisted of Jay's Virtual Pub Quiz and watching the Football League highlights before Match Of The Day came on. 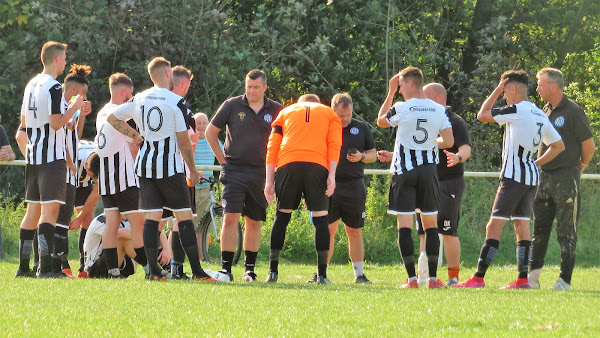 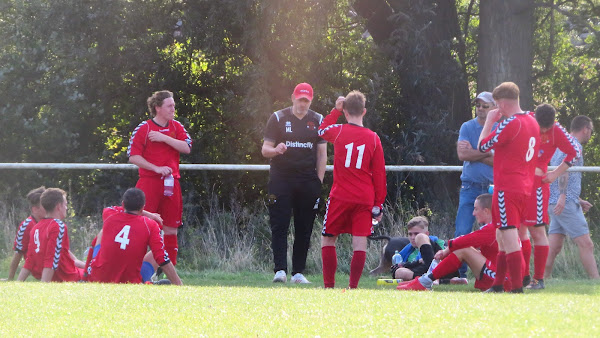 THE GROUND
ABBEY ROAD is a basic setup, three sides railed and a little bit of hard standing thanks to a pathway. There's no cover, but the dugouts are decorated in club colours and look great. There is a small bar nearby, but this is officially members only. The ground is set in a pleasant park with quaint cottages nearby - not what you would expect in Milton Keynes. However, the narrow roads mean parking is at a premium, but it should be OK for most games. 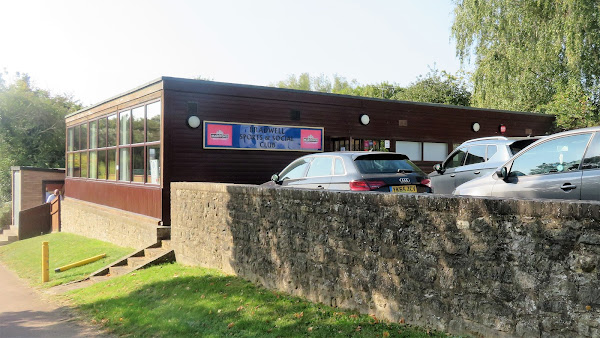 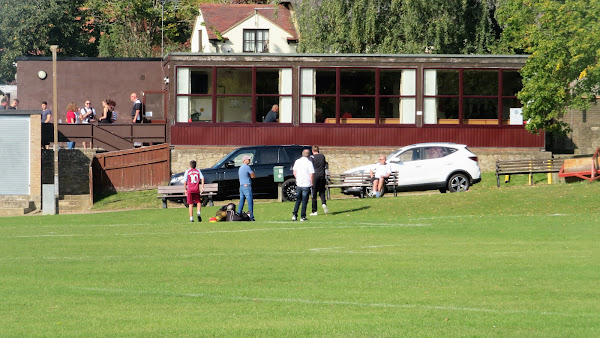 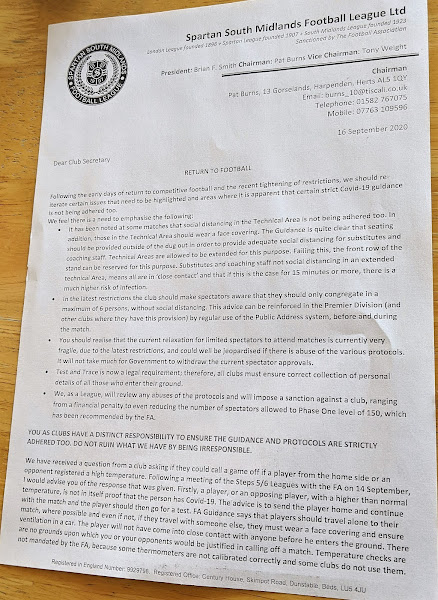 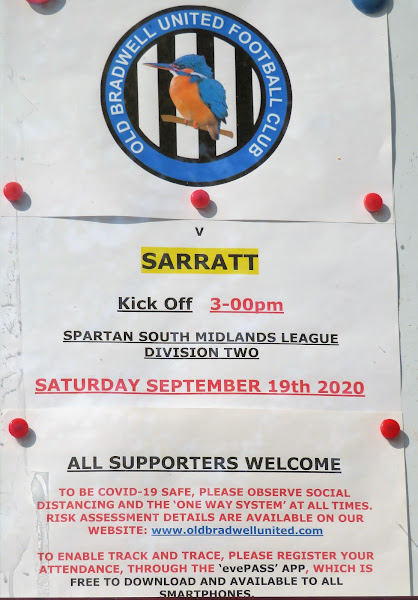 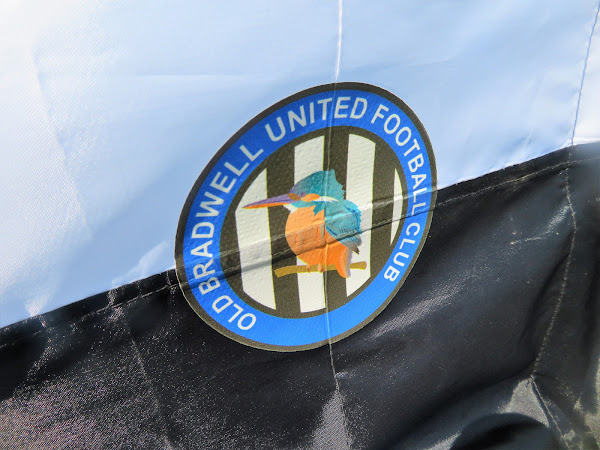 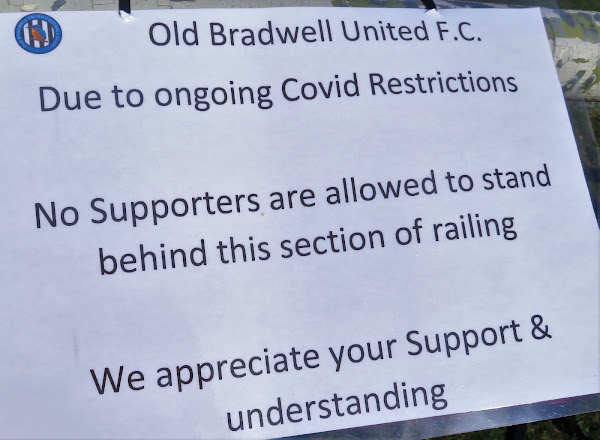 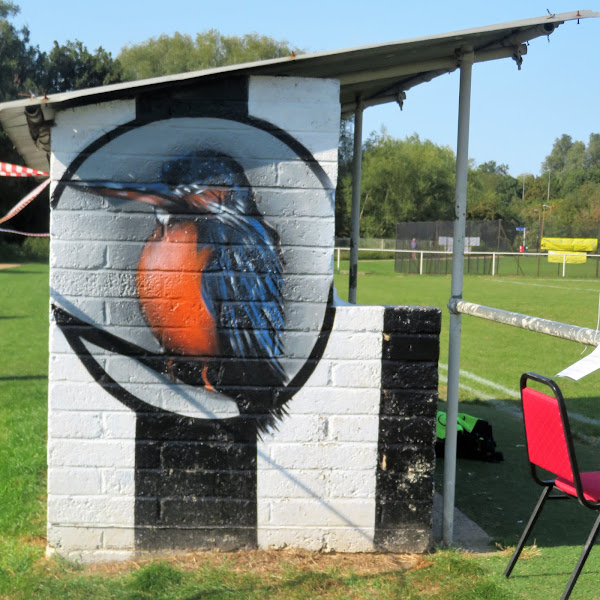 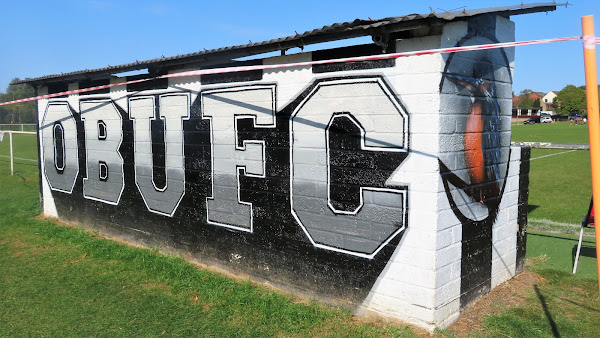 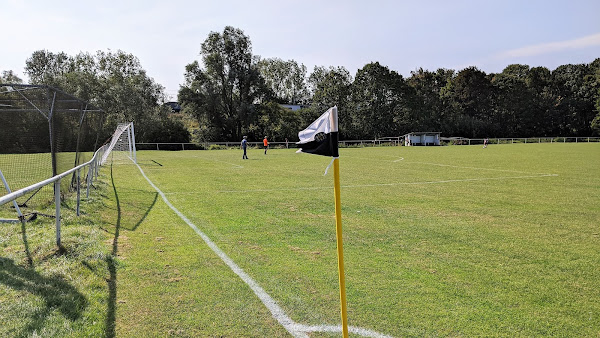 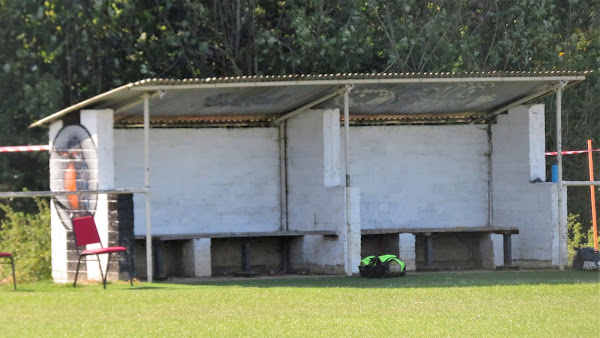 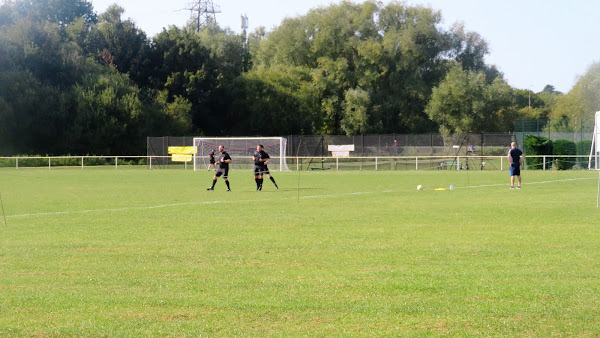 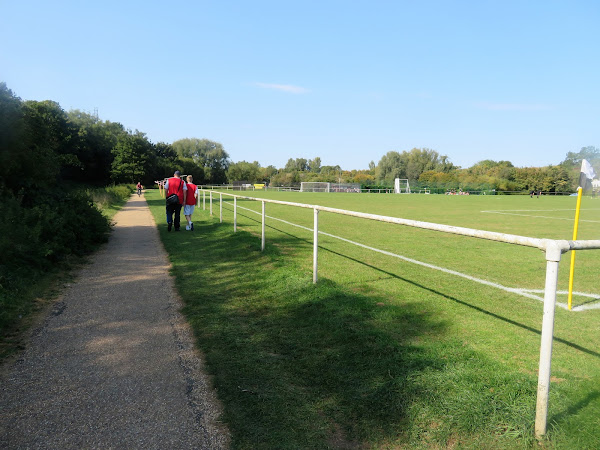 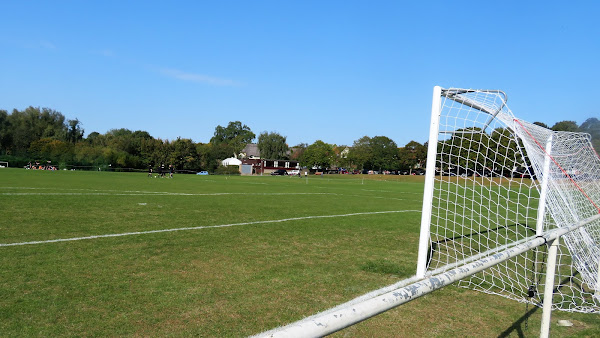 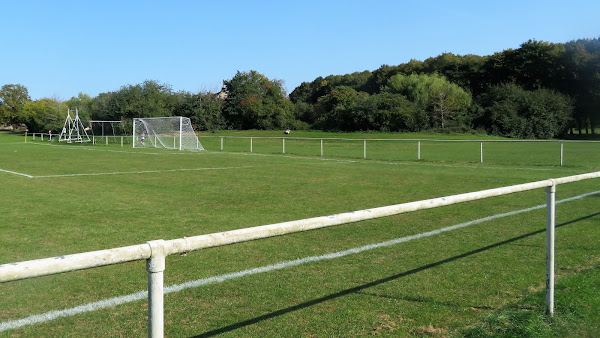