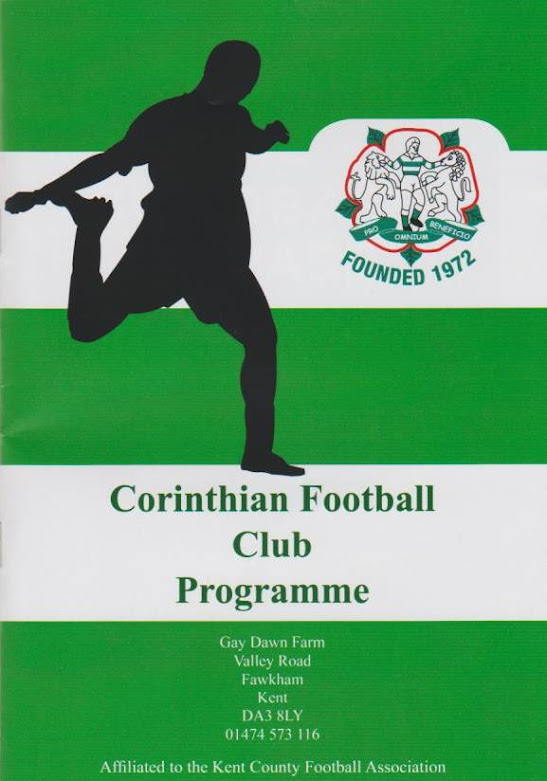 Corinthian FC was established in 1972 by Ron Billings and was named after the original Corinthian FC - a strictly amateur club that played during the early part of the 20th Century. Though initially a youth side for eight and nine-year-olds, they progressed to open age football, though keeping the amateur ideals. They were without a league until 1985 but still managed to play friendlies against the likes of Tottenham Hotspur, Norwich City and Charlton Athletic. Amazingly, in their first season in competitive football, they were admitted to the Southern League's Southern Division (step 3) and finished a credible 5th. Results gradually deteriorated and in 1991, they were relegated to the Kent League after finishing bottom. Despite an 8th place finish in 1994, they finished bottom of the league in 1998, after which they withdrew from senior football completely to concentrate on their youth setup. They'd remain this way until 2008 when they rejoined the Kent League Premier (step 5) and although they found things tough at first, have remained here ever since, albeit in the renamed Southern Counties East Premier Division. Their best-ever finish of 2nd came in 2019, just a point behind eventual champions Cray Valley PM. Last season, they were right in the title race again, this time sitting in 2nd place before the whole season was abandoned.

#OnThisDay 1979: "Some men play football, others watch it. But that's not good enough for Ron Billings."

Nationwide paid a visit to Corinthians football club in Kent, where founder Ron Billings was trying to improve the image of the game. pic.twitter.com/apVeXIC4gi

Corinthian's best run in the FA Cup came in 1993 when they reached the 2nd Qualifying Round - beating Croydon Athletic before losing 2-0 at Molesey. They are currently enjoying their best run in the FA Vase - having beaten Sheppey United, Canterbury City, Ascot United, Chatham Town, Sporting Khalsa and Leighton Town to set up a semi-final against Hebburn. The tie was reduced to a single leg tie due to the coronavirus pandemic and Corinthian won the toss to play it at their home ground. Famous players to turn out for the club include cricketer Sam Billings (grandson of the club's founder) as well as Alfie May, Mo Eisa, Jimmy Bullard and Andy Hessenthaler. The club is based in the small village of Faulkham (despite it being listed in most places as Longfield) which has a tiny population of just 429. It is situated near the bigger towns of Sevenoaks, Dartford and Gravesend and also not far away from the Brands Hatch racing circuit. 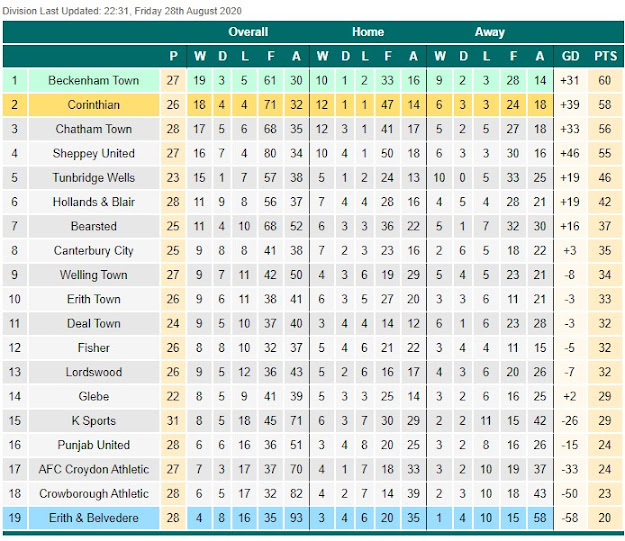 I'd first eyed this game up way back in February, following Corinthian's win in the Quarter-Final. At that point, I was expecting it to be a two-legged semi-final and was hoping that the Corinthian home leg would be on a Saturday when Wycombe had an away game. As it turned out, the coronavirus pandemic bought a crashing end to the whole season and everything was in limbo. With the competition so far progressed though, the FA decided to carry on with the competition. There was a draw to decide who would play at home and happily, Corinthian got drawn out. Though I've not been to Hebburn, it is 250 miles away and I'd not have been able to justify the cost. I kept my ear to the ground for ticket news, what with capacity limited to 300 due to social distancing. I had Joseph, AKA 'Groundhopping FC' to thank for letting me know whilst we were both at the Sittingbourne v Gillingham game last Saturday. Tickets were available online and although the Corinthian end sold out within a couple of minutes, we both managed to bag a space in the Hebburn section. The price was a very reasonable £7.50, crazily, 50p cheaper than they were charging for that day's friendly against Lewes. I was happy enough to be in the Hebburn end as I normally feel really 'at home' when I go up that way. I was a former resident too - if only for around 18 hours when I stayed in a bed and breakfast whilst watching a few games in October 2018. I'd popped in for a look at their ground too, which was pretty smart and it's one I'm likely to do as it's in one of my favourite areas and easy to do on public transport after a pub crawl. 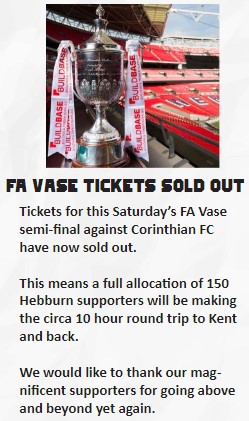 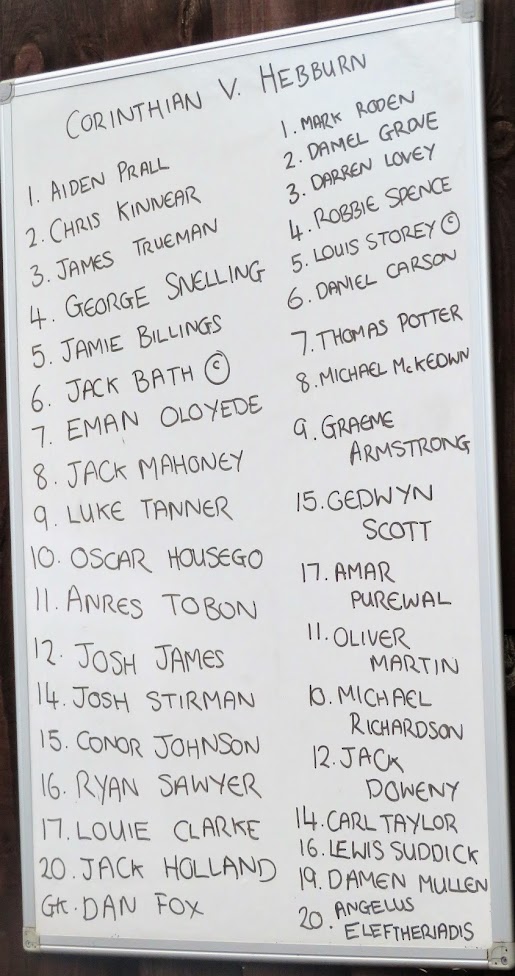 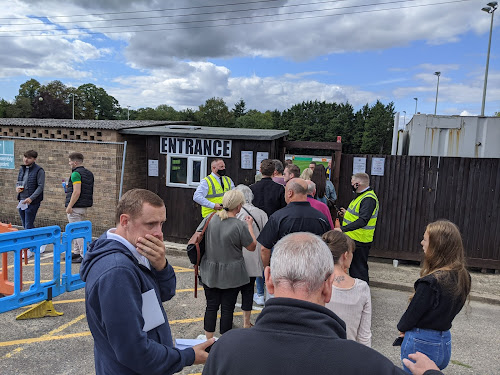 I'd been disappointed with my search for a Friday night or Saturday morning game. Also, when I checked the route on Thursday evening, the ground was in the middle of nowhere with no decent place to stop for food en route. It had been a busy week at work and so I was glad to get for my usual couple of pints down the Rose and  Crown on Friday afternoon. There was disappointment at Lidl after as with the chillers broken, I couldn't get the steak and haggis pies that I wanted, nor the chicken for the game. I checked on my PC when I got home and decided to take a slight detour to the branch in Sevenoaks in the vague hope that I'd get what I wanted. I had a fairly early night on Friday and so woke around 5 am on Saturday. I had another hour or so in bed before getting up and having breakfast. The morning was spent killing time, with me trying to plan some games for my week off work. Devon looks like my preferred destination and so I spent time plotting out a map of potential games before leaving at 11.15. I needed petrol, so I stopped at Harvest in Holmer Green. The price was impressive for one out in the sticks, just 1p more expensive per litre than the cheapest in the country. I filled up and was on my way. The M25 was it's usual self and I suffered around 20 minutes delay, getting to Lidl in Sevenoaks at 1.20. I once again drew a blank when looking for my pies, though looking at the website again, it was Scotland only. I picked up some lunch in any case - a Pretzel (at which Lidl excel) and some BBQ chicken as well as some cider for later. I was about 20 minutes overall and so after leaving, had a short drive to the ground, arriving at 2.10. I had my lunch before going in, entry was good and efficient with Covid Protocols being followed. I picked up a programme for £1, this was fairly thin but didn't have a single advert in it, much like the ground itself, obviously a conscious decision to keep up with club traditions. Both teams were well-represented fan wise, though there was quite a lot of space left, even with one side closed and social distancing observed. I chatted to Joseph - AKA Groundhopping FC and we both reckoned it would be going to penalties with Hebburn triumphing in the end. The phone signal was very patchy at the ground, though the surroundings were very beautiful and rustic. 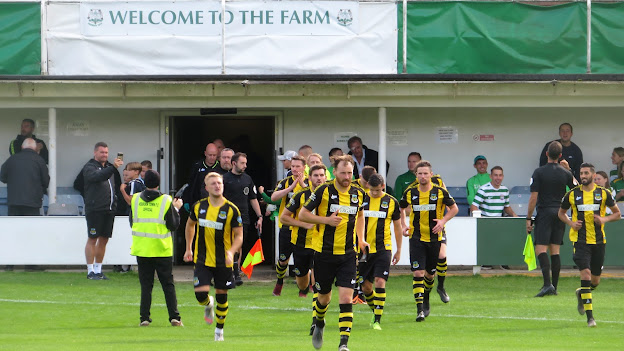 Both teams had been on excellent form during pre-season. Corinthian had beaten Barking 1-0, SC Thamesmead 4-1, AFC Uckfield 3-0, Cray Wanderers 4-2 South Park 3-1, Corinthian-Casuals 5-1 and Lewes 2-0. They'd also progressed in the FA Cup on Tuesday, overcoming Sheerwater 2-1. Hebburn Town had beaten Heaton Stannington 3-0, West Allotment Celtic 4-2, South Shields 1-0, Jarrow 4-1 and Blyth Spartans 3-0 as well as drawing 2-2 with Morpeth Town. They'd also gone through in the FA Cup, thanks to a 4-1 win over Hemsworth Miners Welfare. They'd got this far with a 3-0 win over Sunderland RCA before victories on the road over Lower Breck (5-1), Vauxhall Motors (1-0) and Longridge Town (1-0). They'd beaten Plymouth Parkway 2-0 to set up today's game. The visitors had the best of the game, but couldn't make the breakthrough. Eman Oloyede was the main threat for the hosts but it was Andres Tobon that went twisting and turning in the area, shortly into the second half. Penalty awarded and Oscar Housego stepped up and blasted the ball confidently past Mark Roden in the Hebburn goal to give the hosts the advantage. There then followed a period where Corinthian were well on top and looking comfortable with being ahead.   The task was made all the more difficult for the visitors when Oliver Martin lunged in on the keeper a bit late. There was not a lot in it, but the referee adjudged a red card and the visitors were down to ten men. Hebburn then laid siege to the home goal, there were a fair few goalmouth scrambles, but they just couldn't score. Graeme Armstrong, the former Darlington man smashed a free-kick off the underside of the bar, but it came to nothing. An equally iffy penalty was awarded to Hebburn Town in the dying embers of the game but Armstrong stepped up and blasted it past Prall in the Corinthian goal. The visitors had a couple of good chances but they appeared to have won it around 10 minutes into extra time, Armstrong's stooping header evading the Corinthian defence. It was another dodgy penalty awarded to Corinthian, an offence that looked well outside the area. Even so, Jamie Billings converted and it was 2-2.  All the way to penalties then and so Hebburn converted all five of theirs. Corinthians were stymied though - firstly by  Jack Bath having his effort saved and then by Louie Clarke blasting over the bar to break his team's hearts. Both teams had battled hard, but there was only to be one winner. 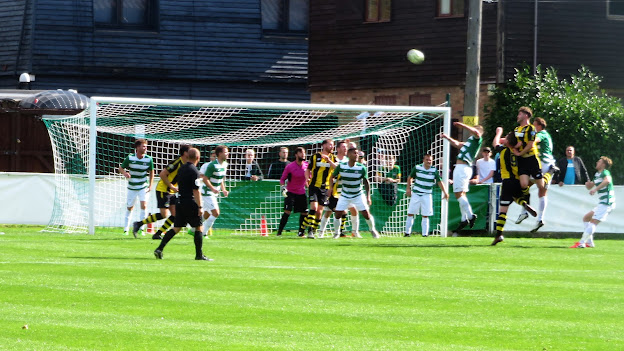 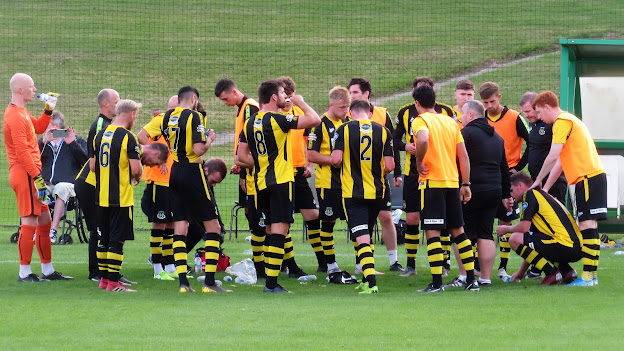 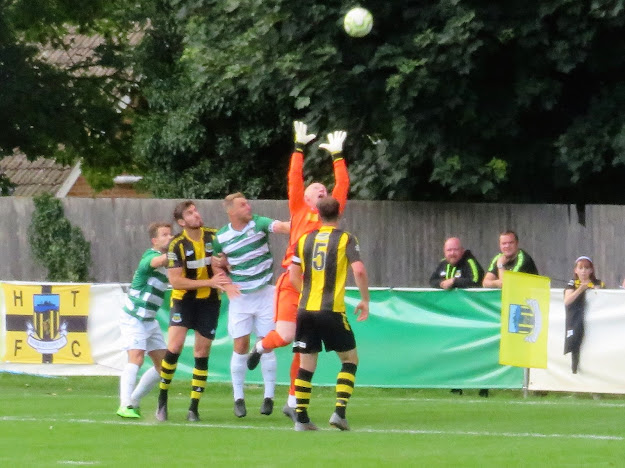 It was nearly 5.50 by the time I left but after a queue out of the car park, I had a good journey home. I listened to the England game on the way home, initially on Radio 5, but then on TalkSPORT. It was a hard-fought win over Iceland with the game going a bit crazy in injury time, with a penalty apiece for either side. England scored theirs and Iceland missed their kick, so we won 1-0. There was the usual pathetic negativity online, but England have come on leaps and bounds under Gareth Southgate since the dark days of the 2016 defeat to Iceland. The M25 was well behaved for once and with no stops,  I was back home by 7.10. I learned that Consett had overcome Bitton in the other semi-final to make it yet another all Northern League Final. So much had gone on in my own game, that I'd been too engrossed and so held off writing the match report part of my blog until I'd viewed some video footage and reports. I was I bed and watching TV shortly after 9.30 and awaiting my least favourite day of the week. With England playing again on Tuesday, there's a good chance I'll give football the swerve, making Chesham United v Wycombe Wanderers XI on Friday my next game. 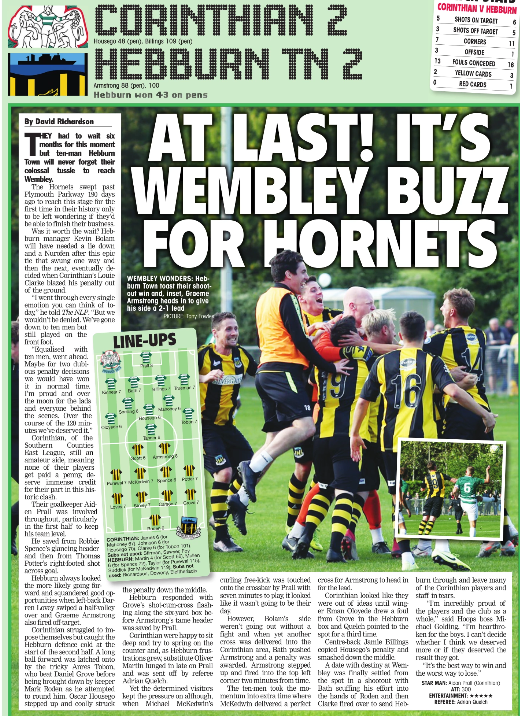 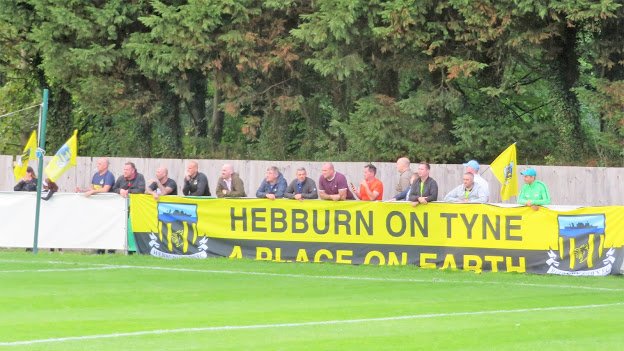 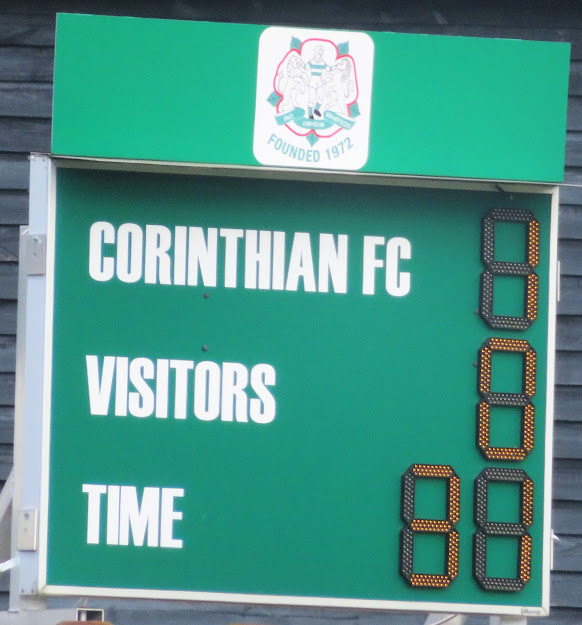 GAY DAWN FARM is exactly as it says - a farm and so it is set in lovely green scenery in the middle of nowhere. The ground is nice and rustic - behind the goal where you enter is a seating area for spectators, plus one for the directors - around 70 seats in total. Along the side is a converted shipping container with another 50 seats - this has an arena-like stand on top, though it has seats salvaged from the Olympic swimming arena. The rest of the ground is open hard standing, with the far side closed off, presumably for cricket. Food and drink options were fairly basic on my visit with independent vendors bought in to cope with the demand as the clubhouse was reserved for players and officials. 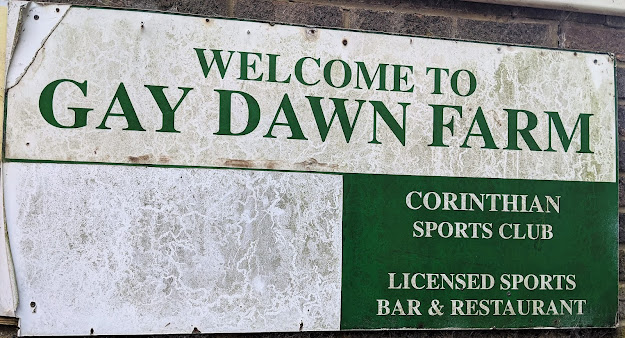 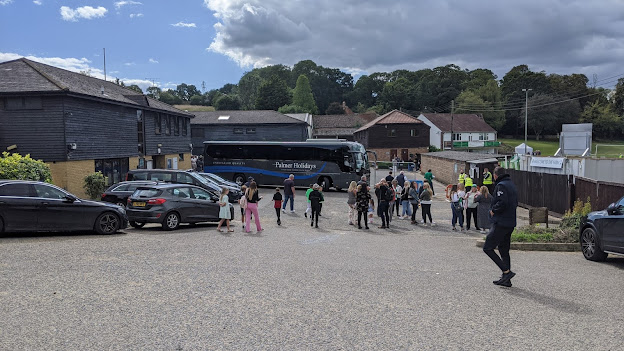 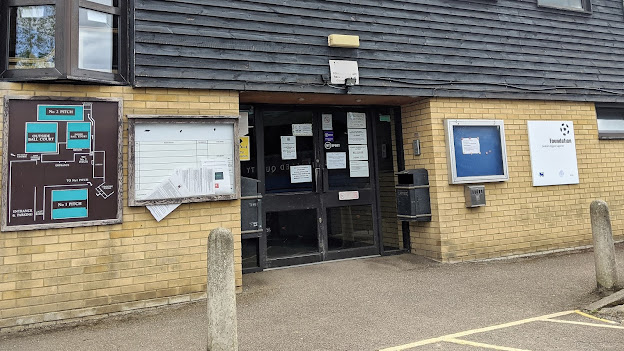 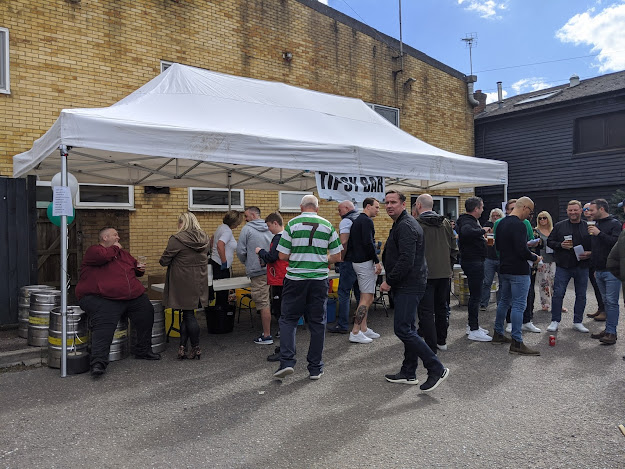 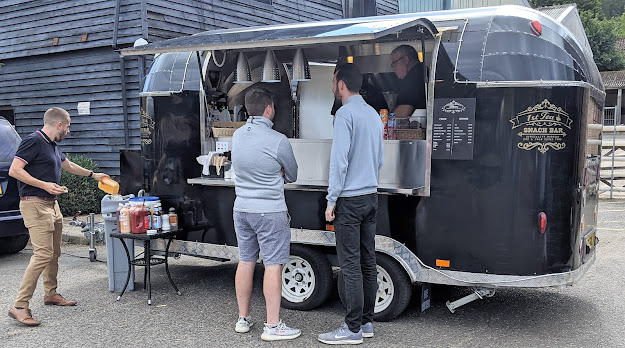 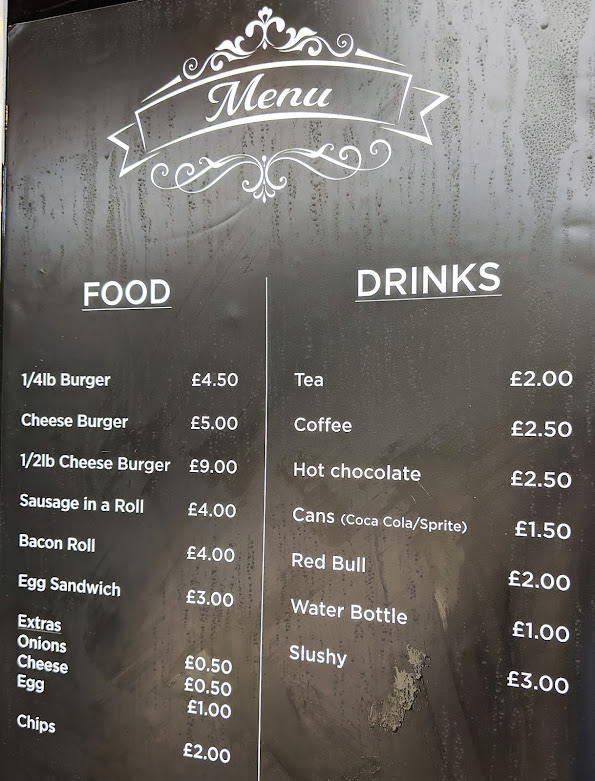 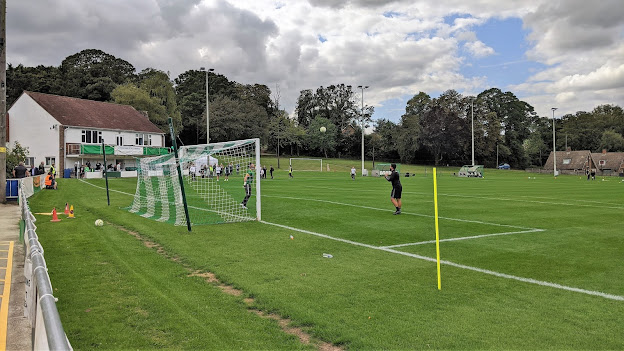 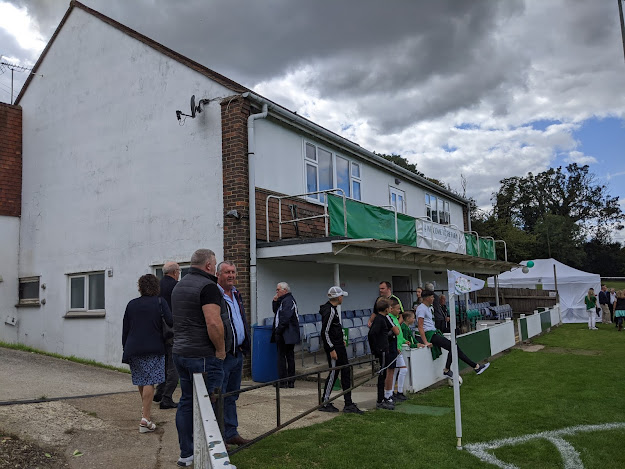 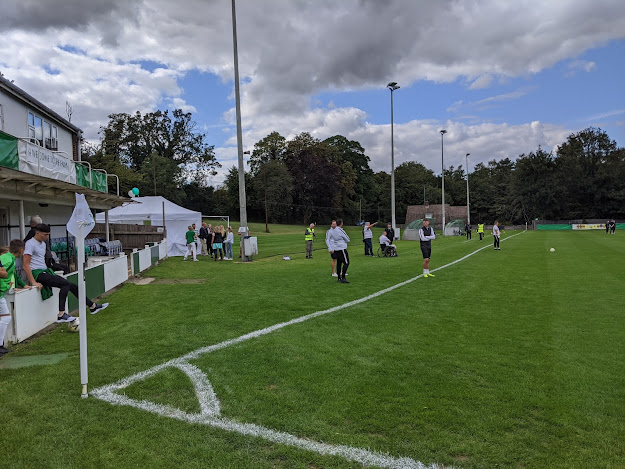 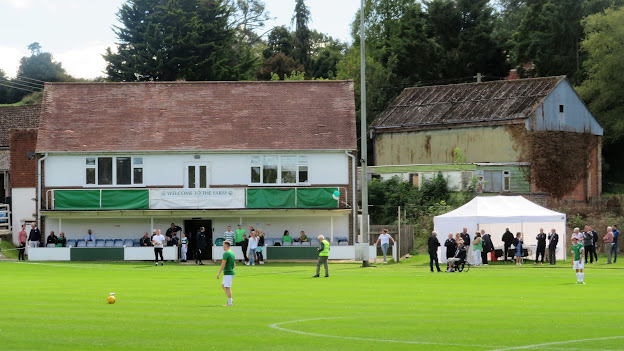 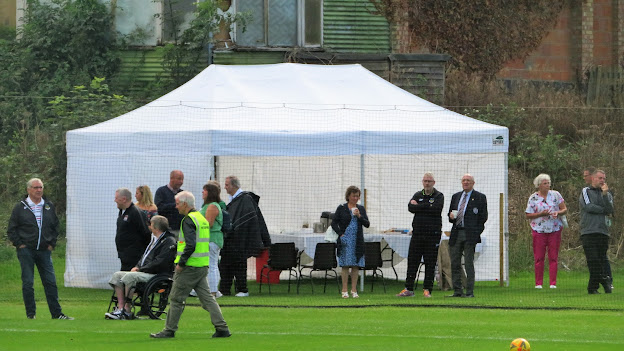 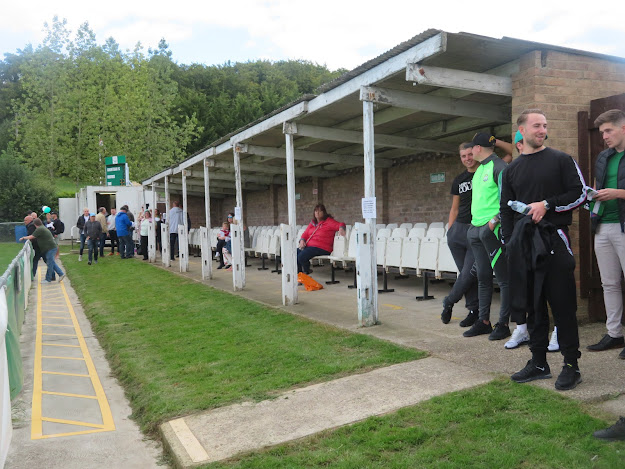 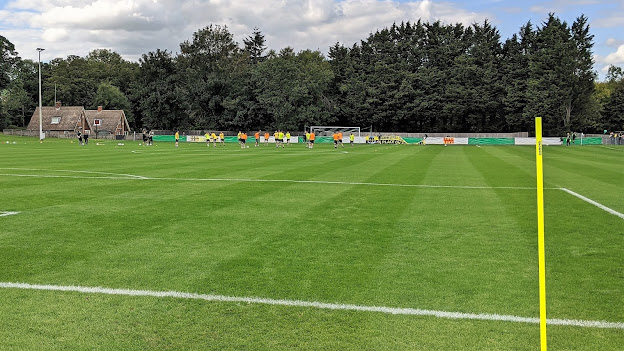 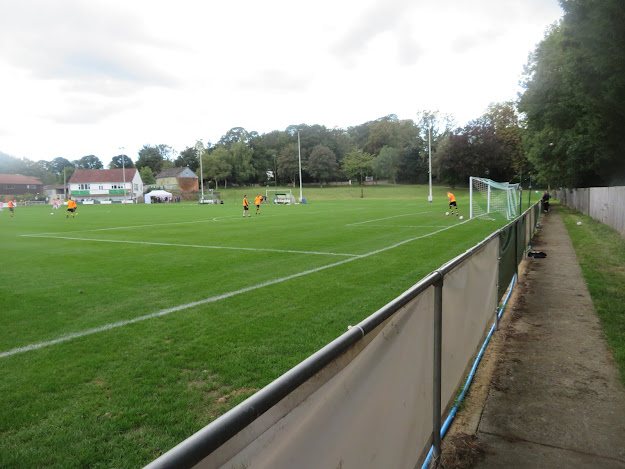 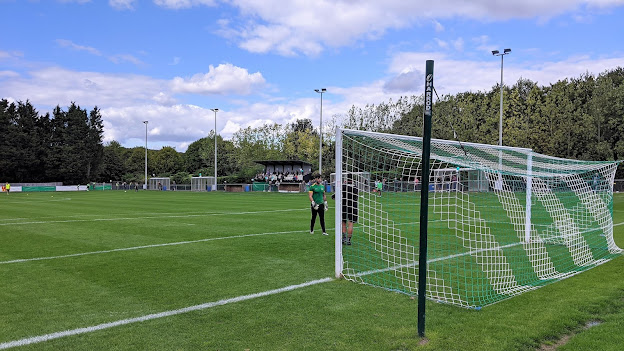 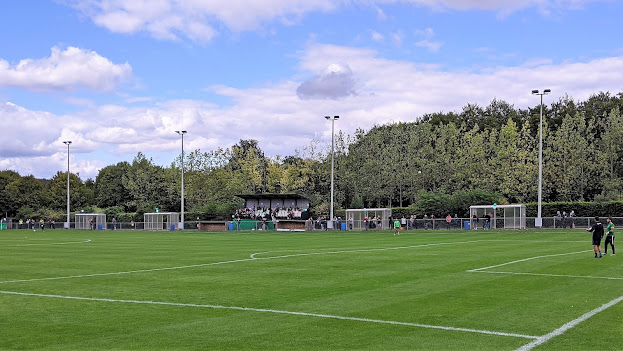 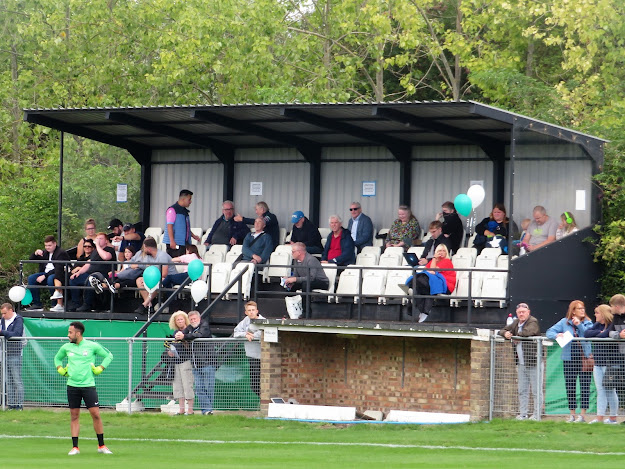 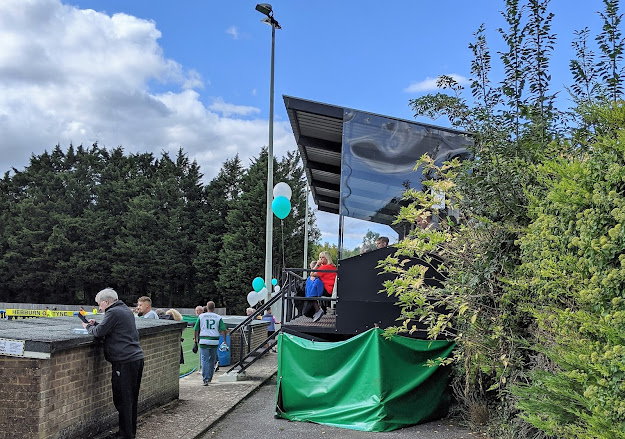