The club is a fairly young one, having been formed as recently as 2001. They were initially a youth club, but in 2009, they joined the Worcester and District League. They spent four years here before joining the West Midlands (Regional) League in 2013. Their first season in the step 8 Division 2 saw them finish 3rd behind AFC Ludlow and Team Dudley and win promotion to Division 1. They spent five seasons here before they were champions in 2019, winning promotion to the Premier Division in the process, following upgrades to their home ground. The club was in mid-table when the season was abandoned in March. In the summer, higher league Worcester City took over Claines Lane. Raiders were offered the chance to play at Worcester Warriors Sixways Stadium and were taken over by their owners Colin Goldring and Jason Whittingham in the process. The future now looks bright for the club with security at their new home. The club entered the FA Vase for the first time this season but went out on penalties to Midland Premier outfit Coventry Sphinx on penalties at the first hurdle. 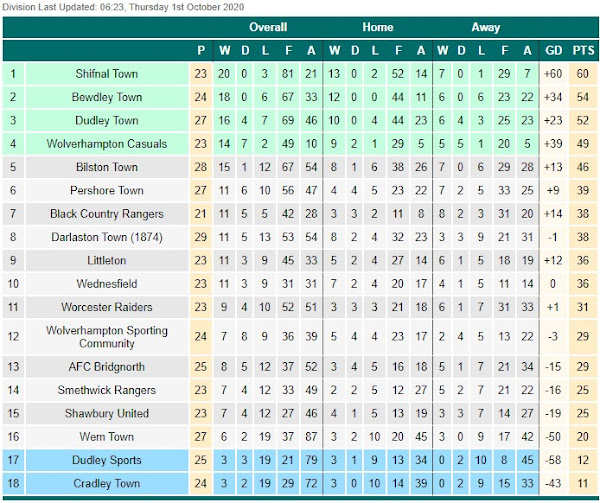 With the government not allowing fans back into the first six steps of football, despite almost every other single industry being open, I'd be groundhopping for the foreseeable future, What with there not being an infinite amount of grounds with floodlights, I was keen to do a step 7 ground. This also had the added bonus of being more local and a lot cheaper on the costs. It also meant that with my first and second choices - Carterton & Lambourn Sports - kicking off at 2, I'd be able to listen to the second half of the Luton Town v Wycombe Wanderers game on the radio. Fellow hopper Anwar was keen and so would join me for the trip. The only fly in the ointment was the good old British weather, doing it's often repeated trick of remaining dry all week and then pelting it done at the weekend. Because of this, I had a total of 12 backups planned, including two 3G's at Worcester Raiders and AFC Stoneham. Friday came and I was stuck at home thanks to the stinking weather. A 'rescue package' was announced for the National League by the government, but as ever with those mercenaries, it was all about money, without a thought for the mental health of the supporters that were missing out on seeing their team due to the excessive measures on watching football in the first six levels of the English leagues - despite no such measures on most other leisure activities. I had a few drinks on Friday night and was asleep before 10. 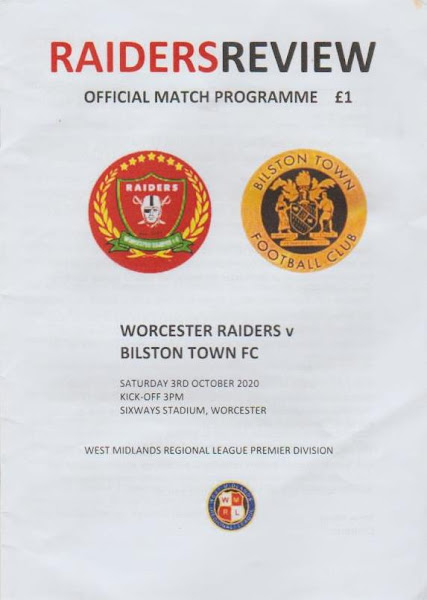 As a consequence, I woke up really early, even before my normal work time of 4 am. I watched TV and YouTube for a while before getting up around 7. I'd set up a Twitter list for all of today's possibilities, but obviously, at this time, news was thin on the ground. I spent the morning at home, trying to keep updates but with step 7 being geared far more towards playing than spectating, there wasn't much news. As usual, I was just killing time before I was set to leave at 11.30. I met Anwar at 12 and with the rain still coming down heavy, we decided not to chance it and go to Worcester Raiders v Bilston Town instead. We'd both have preferred to stick with our original plan but didn't have much confidence in the game going ahead, what with the weather. Added to the fact that Carterton were not tweeting, we decided to play it safe.  I got us a pair of tickets on my phone for £5 each, plus a £2 booking fee for the pair. As we made our way up towards the Midlands, the rain became heavier and heavier. We got to Worcester at 2, picking u[ a few bits from Lidl for lunch. I was disappointed that they didn't have any of the cider I like in stock but picked up a cookie, a pretzel and some chicken. We got to the ground at 2.25 and parked up. We picked up our tickets and I bought a basic programme for £1. There was quite a visible stewarding presence, but they were fairly relaxed and amiable. There wasn't much time before the game once I'd eaten and I also got some pricey but decent chips for £3. 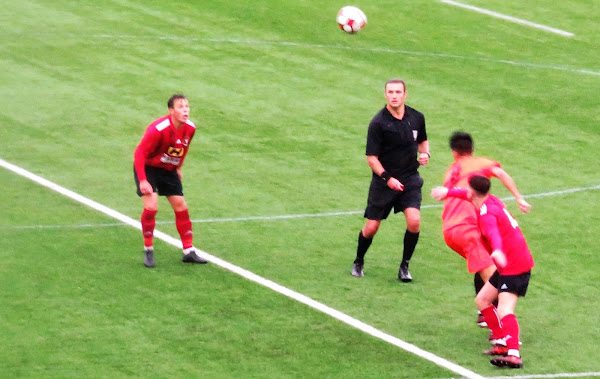 It was a game involving two of the early pacesetters in the WMRL Premier. Worcester Raiders were 4th having beaten Wolverhampton Sporting Community 4-0 and drawn 1-1 away at Bridgnorth Town. They'd also taken higher division Coventry Sphinx to penalties in the FA Vase before ultimately losing. Bilston Town were 2nd and had won both of their games - beating Wolverhampton Sporting Community 4-2 and Bewdley Town 4-1. They'd also taken a higher division side in Rugby Town to penalties, though they also went out. It was a quick start to the game and the visitors were ahead after three minutes when a home defender cleared the ball against Bilston's Ben Podmore but only succeeded in deflecting the ball into the net. Worcester Raiders sought to get back into the game and they had a good chance when visiting keeper Brad Clarkson saved a close-range drive from Isaac Cooper. The equaliser came on 15 minutes when Luke Molloy's low shot from the edge of the area found the bottom left-hand corner. The hosts nearly went ahead on 24 minutes but Lewis Gills shot hit the bar. The game was fairly equal in the first period, but Worcester Raiders dominated the second half. They were ahead on 64 minuted when Isaac Cooper's long-range effort was deflected home by Kyonn Evans. They nearly extended their lead a couple of minutes later but Cooper's free-kick from 20 yards struck the bar. Liam Matthews headed in a corner to equalise against the run of play on 86 minutes, but there was still time for a late sting in the tail. Zaq Hussain scored the winner in the 90th minute, poking home the ball from few yards out from a goalmouth scramble to win a thoroughly entertaining game.

Late equaliser for Bilston Town. 2-2 after Worcester Raiders dominated the second half. pic.twitter.com/LPWP72WqSG

All whilst this had been going on, or beloved Wycombe had been beaten 2-0 at Luton in another disappointing performance, with it now being four Championship games without a goal or a point. Thanks to the wonders of the Internet, we were able to listen to BBC Three Counties on the way home and it didn't make for particularly optimistic listening. This gave way to 6-0-6 with Robbie Savage and Chris Sutton which was a decent listen. I dropped Anwar off at 6.35 and got home myself just after 7. I was glad to be able to crack open a cider and relax. I caught up with things and was surprised that Carterton went ahead as they beat Stonesfield 5-3 in what must have been a decent game. Nevertheless, I'd really enjoyed my game and my day but had quite a lot of work to do on my blog without any prior research. It was a bit of a hopper-fest with Chris Berezai (from the brilliant GroundhopUK), Craig Dabbs, Alex Craig and 'Burnley' in attendance. I went to bed around 10PM, not really looking forward to my 4am alarm on Sunday morning. 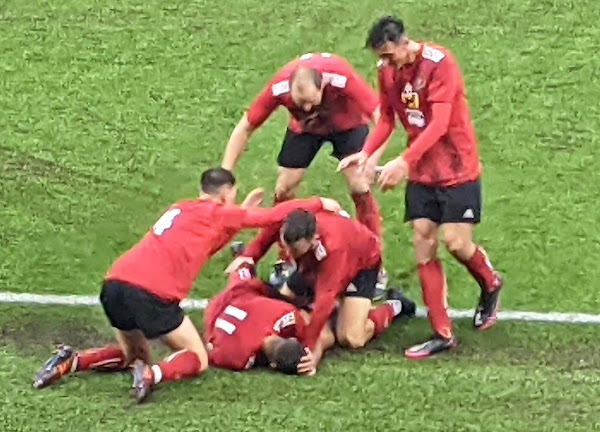 SIXWAYS STADIUM is the home of Worcester Warriors Rugby Club and is a top decision stadium in that sport. The ground is a modern and interesting one. The overall capacity is 11,000. For the football, spectators get the lower tier of the East Stand, this offers great views and has a capacity of around 5,000. To the left is the attractive South Stand which is seats and a couple of rows of executive boxes, capacity around 2000. Opposite is the West Stand, this houses all the players' facilities and has an attractive roof, again capacity around 2000. Finally, the North Stand is a temporary looking stand with a plastic roof and green seats, similar to ones at Bristol Rovers and Crawley Town. Again, the capacity is around 2000.

The ground is an out of town one, miles from anywhere with no obvious places around the ground for food or drink. There's plenty of free parking though and it's very close to the M5 Motorway. The bar is smart and has a range of drinks, for cider drinkers that is Stowford Press cider and the mixed berries one. The food is decent but pricey, they tend to go for the gourmet vibe. The chips I had were very nice and the portion was generous too 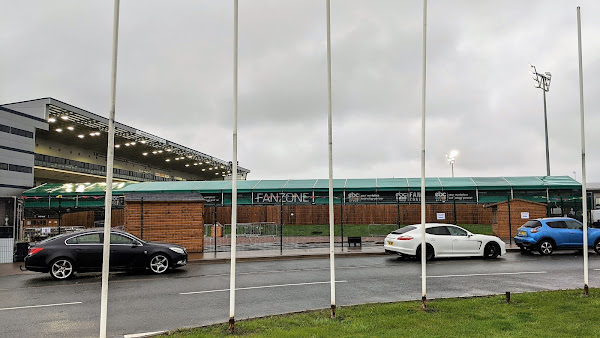 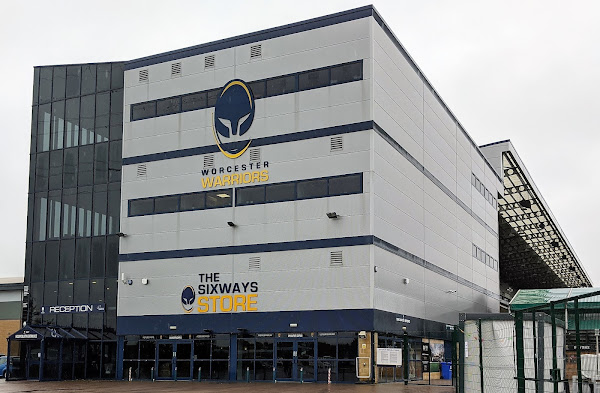 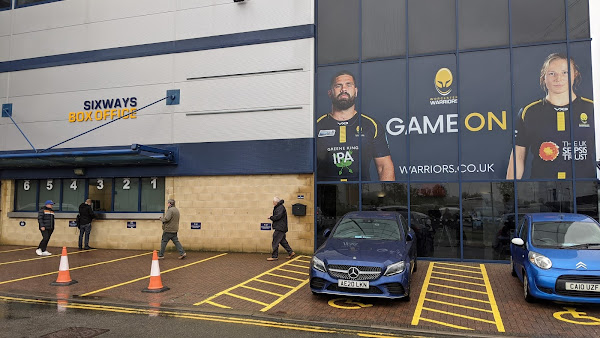 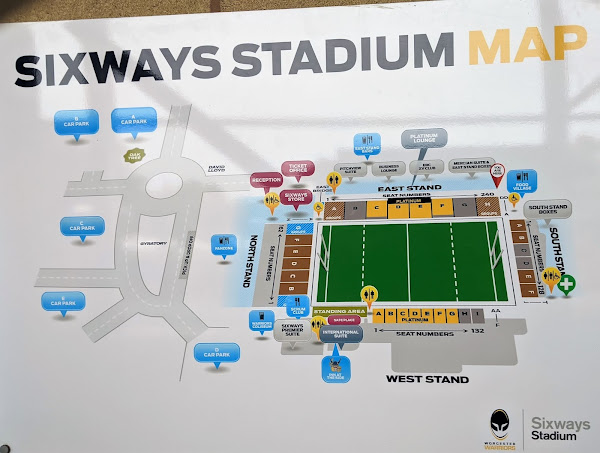 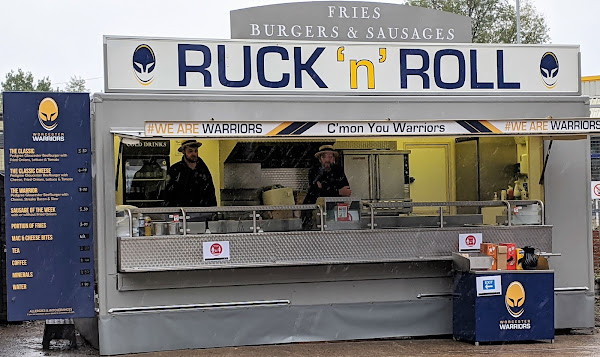 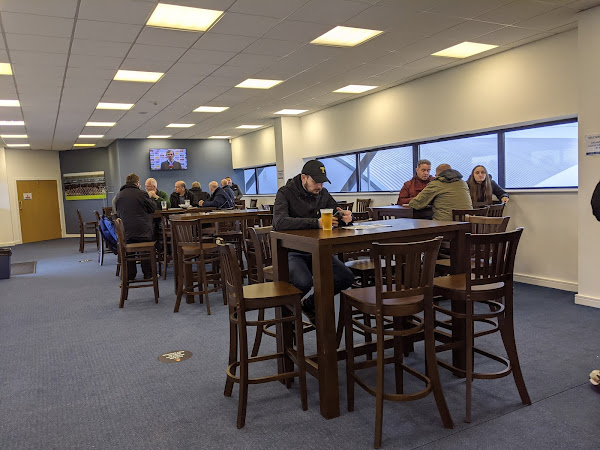 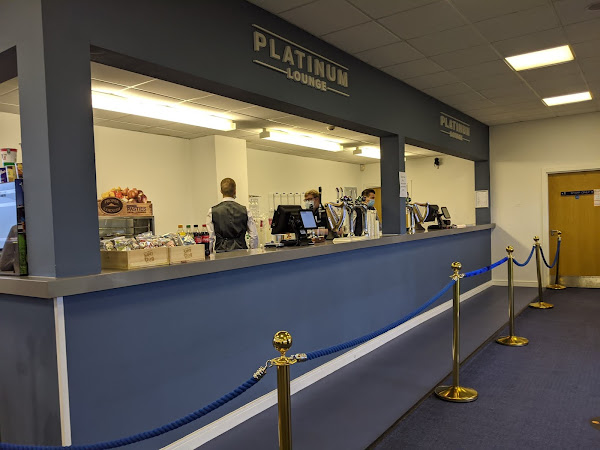 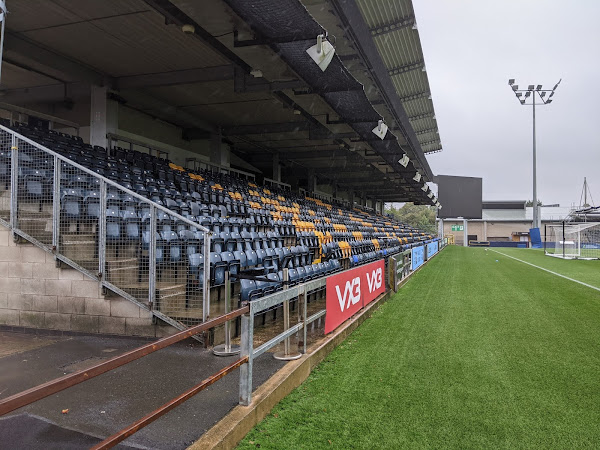 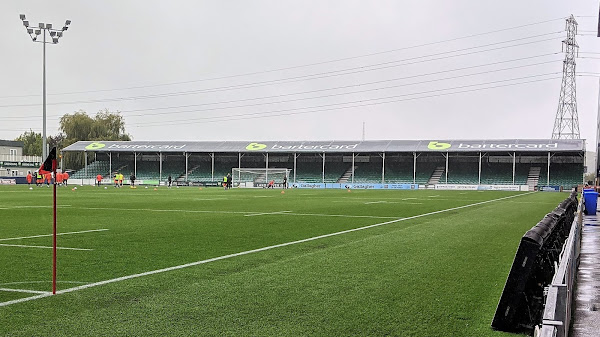 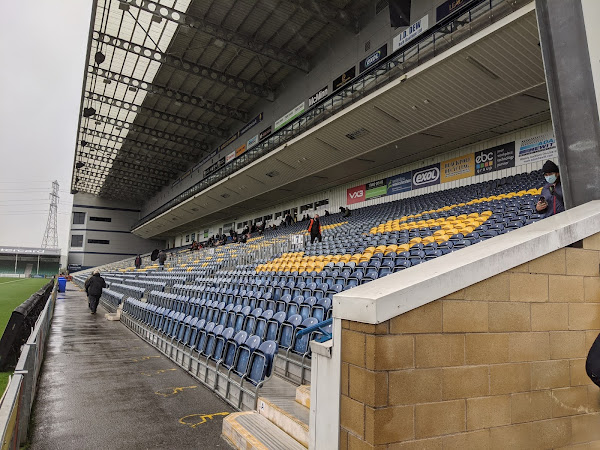