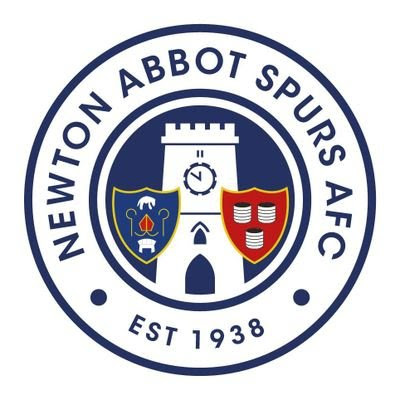 The club was established in 1938, joining the South Devon Minor League upon formation. The Second World War interrupted proceedings and so for the next five or so years, they played only friendly games. When football returned, they played in the South Devon & Plymouth & District Leagues, winning the latter in 1950. In 1951, they were founder members of the South Western League and stayed for a couple of seasons before drop[ping back to local leagues such as the Plymouth & District and Exeter & District before a second spell in the South Western League from 1959 to 1971. Results were unremarkable and so they dropped back down to the South Devon League. Newton Abbot Spurs were Divison 2 champions in 1977, this earned them promotion to the Premier Division. They won the title on nine occasions, after the last of which in 1996, they joined the Devon County League. Their best finish here was 3rd in 2000 with the league merging with the South Western League to become the South West Peninsula League in 2007. The club was placed in the step 6 Premier Division but was relegated after finishing bottom in 2009. They remained in Division 1 East for ten years, the best finish coming in 2018 when they finished as runners-up to St Martin's. Restructuring at the start of last season saw the club bumped up to step 6 and before the plug was pulled on last season, Newton Abbot Spurs were in 6th place.

The club's best progress in the FA Cup came in 1947 when they beat Wells City before losing to Street. This season, they entered the competition for the first time in 54 years, beating AFC St Austell 3-0 before a 4-0 defeat at Larkhall Athletic. They had their best run in the FA Vase last season, beating Welton Rovers and Wells City before an 8-0 defeat to Herefordshire side Westfields in the 1st Round. Local cup wins include the South Devon Challenge Shield on five occasions, the South Devon League Herald Cup five times, the Devon Senior Cup three times, the Devon Premier Cup twice, the East Devon Senior Cup twice and the Plymouth & District Charity Cup in 1948. The market town of Newton Abbot has a population of just over 25,000 and is situated near the River Lemon, part of the River Teign. It's home to one of only two cider houses in the UK and as well as Newton Abbot Spurs, Buckland Athletic also play in the town. 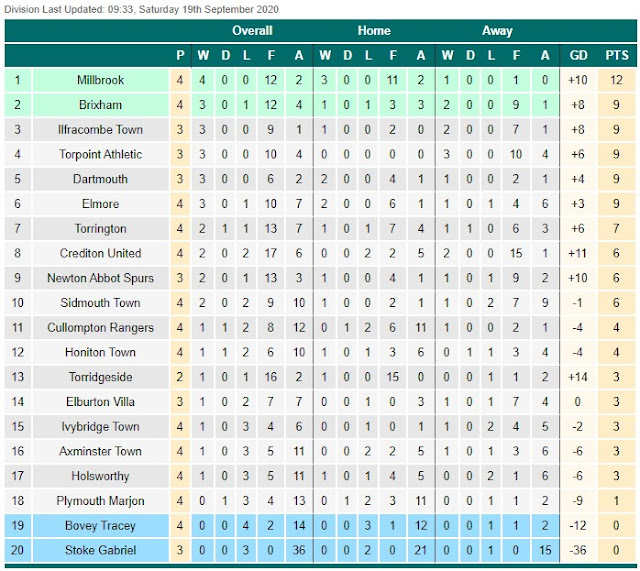 MY VISIT
Back when choosing games for my week away, I'd not really considered the town as a deciding factor. Wednesday was different, however, with Newton Abbot having a couple of great cider pubs, I was glad when they had a home game. I even arranged to stay over for an extra night which had the added bonus of driving home in the daytime. I booked a camping spot at a place around two miles from town. The day of the game came and it had been a rainy night in Saltash where my previous game had been. This hadn't been forecast when I'd looked a few days ago. I didn't have the best night's sleep but I did feel OK in the morning. I stayed at my campsite, uploading my blog in my thankfully dry tent, leaving at 10.15. Before I left Cornwall I got pictures of a rainy Lakeside Athletic and Plymouth Parkway grounds. I then headed through blazing sunshine only to arrive at a drizzly Teigngrace where I was camping. It was a very nice site and I arrived at 12, pitching up in about 15 minutes then waiting in my car until the rain stopped. 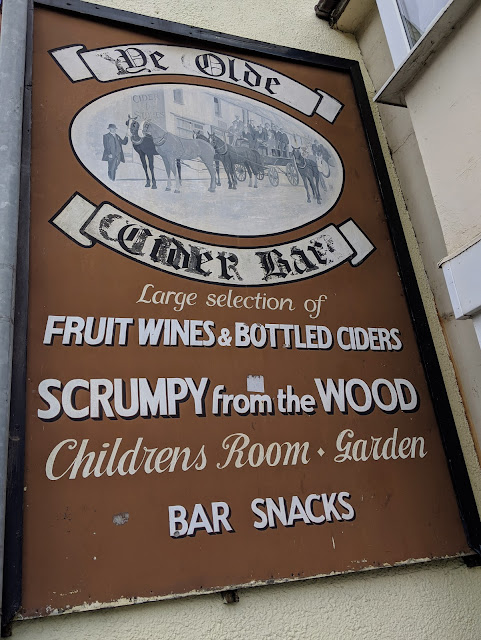 It was a 40-minute walk into town and after going in a couple of shops, I arrived at Ye Olde Cider bar at 2.15. My first choice was out but I had a retry of Sam's Medium which I'd had in Stockport last year. It was then a half of Thatchers Diesel which was very similar to Cheddar Valley. I had a look around some more shops, picking up some Irn Bru and snacks. I was pleased that the forecast rain had not come and it was a double whammy when I got a free audiobook from Audible. I chose Alan Partridge - From The Oasthouse and this kept me company as I walked a few miles to get pictures of the Devon FA ground and Buckland Athletic. I was pleased to get good pictures of both. By the time I got back to town, it was just after 5. Peckish, I made my way to a Chinese takeaway called Hoi Shan where I had a decent portion of salt and chilli chips for £3.50. I then walked to my second pub, the Teign Cellars where I had a pint of local Reddaways cider for £3. I was tempted by the Maltings Taphouse and bottle room but sadly it was closed. Instead, I had a pint of Hunts Devon Wobbler which was probably my favourite of the trip so far. I was dismayed to have used all my 15GB of data a week before it refreshed, so had to pay a fiver for some more as I'd be stuck without it. From there it was to the ground, a 10-minute walk with me getting there at 7. Entry was £5, an excellent programme £1. I headed to the bar to sit down and read my programme before kick-off, having a pint of Thatchers Haze for £3.80. 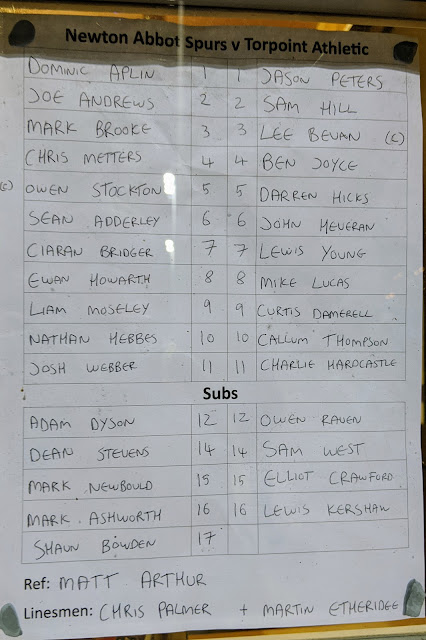 The hosts had won two and lost one in the league so far, beating whipping boys Stoke Gabriel 8-0 and Sidmouth Town 4-1. The only negative was losing 2-1 at league leaders Millbrook. Torpoint Athletic had won all three of their games beating Torrington 4-3, Bovey Tracey 4-0 and Brixham 2-1. Spurs were the better side early on - Nathan Hebbes firing over after a good run and Liam Moseley screwing just wide. There were several other openings too, but they just couldn't hit the back of the net. They dominated the first half but it was goalless at the break. The domination continued after the restart but Torpoint nearly grabbed a goal on the break amongst Spurs protestations of offside. The visitors grew into the game and forced a good save from the home keeper as the half wore on. Spurs came close with a rebound from a free-kick but it wasn't to be. Groundhoppers had travelled from as far as Shildon in the North East to get their football fix and as good as the game was, it remained 0-0.  Just as it looked to end an entertaining goalless draw, Josh Webber finished from a tight angle to give the hosts the lead around 15 minutes from time. I did a headcount of the attendance which numbered 102. There were further chances for Spurs to extend their lead but it wasn't to be. 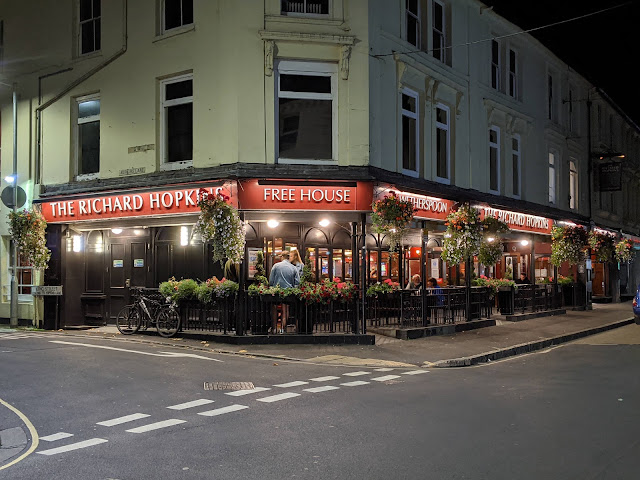 It had been a good game but there was a noticeable drop in temperature so I headed to the local Wetherspoons, the Richard Hopkins. It took an age to be served as there appeared to be no staff but eventually I got served a pint of Back Dragon. I drank it slowly whist I caught up online, leaving at 10.10. There were some rowdy people banging on a shop front as they enjoyed their last night of freedom before the 10 PM curfew comes in tomorrow. My headphones ran out of batteries so I had to listen to my phone through the speaker, though that wasn't a problem as no one was about. I was back at my tent by 11 and had one last cider to send me to sleep. I got a good nights sleep for once and must have slept through whatever rain was forecast. I woke around 6.30 and a couple of hours later, I was all packed up and ready to go. The plan was to stop at Shirehampton & Cribbs grounds to get pictures on the way home. It had been a good time away, though, with a lot of drink taken, I'll be giving it a rest for a couple of days. 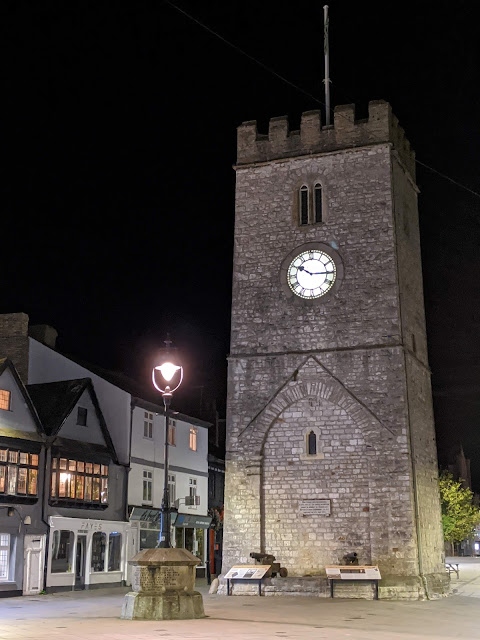 THE GROUND
THE REC is a decent setup. Unusually, both covered seated stands are behind each goal, both are unique and hold about 100 between them. The rest of the ground is open hard standing. Basic bar and food facilities are provided but the town is a short walk away and offers better choices. There's plenty of parking and public transport is good too.  The pick of the pubs is the Teign Cellars with a good range of drinks and decent looking food. 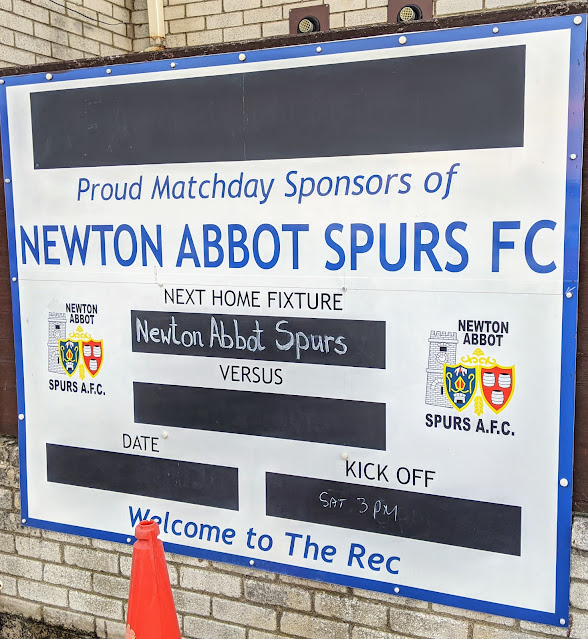 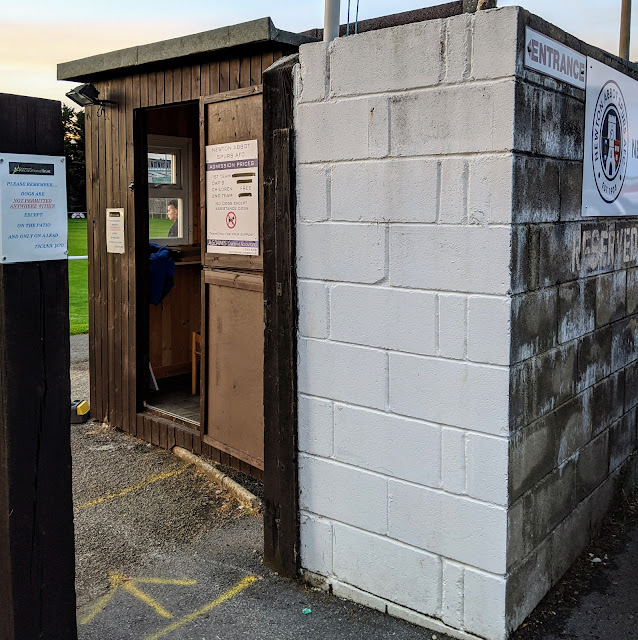 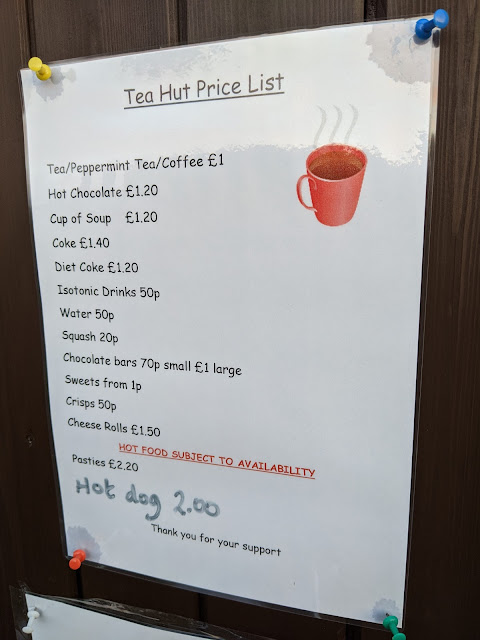 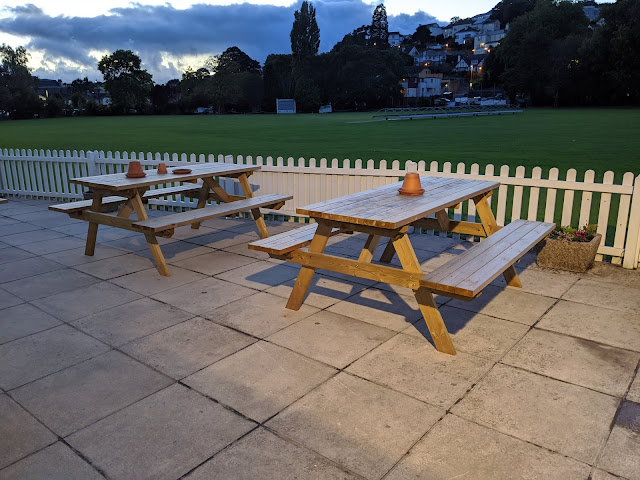 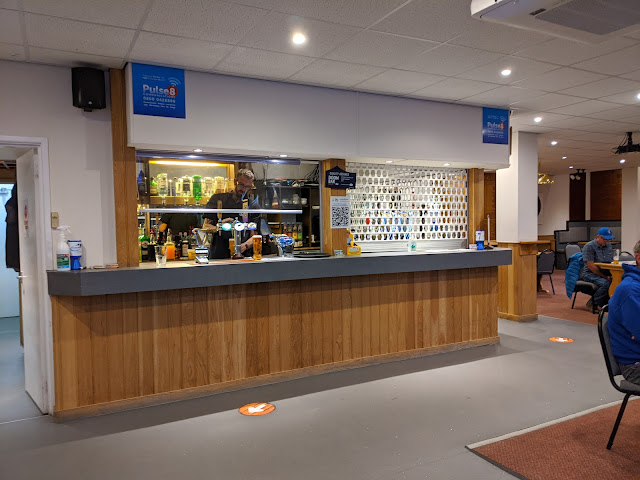 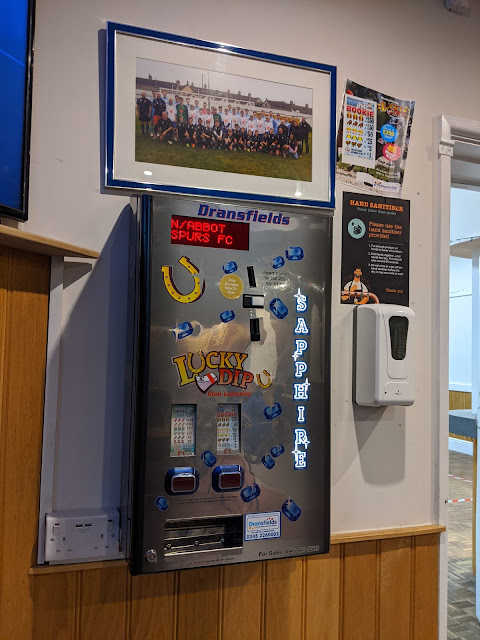 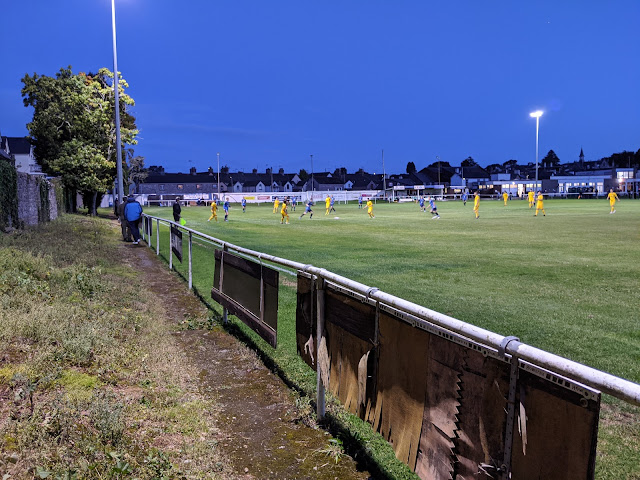 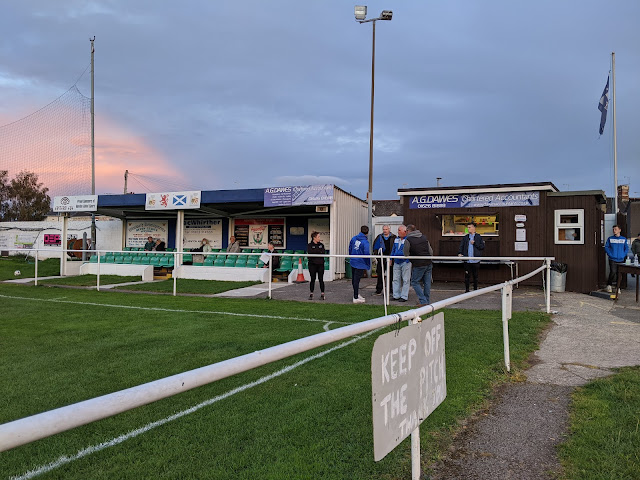 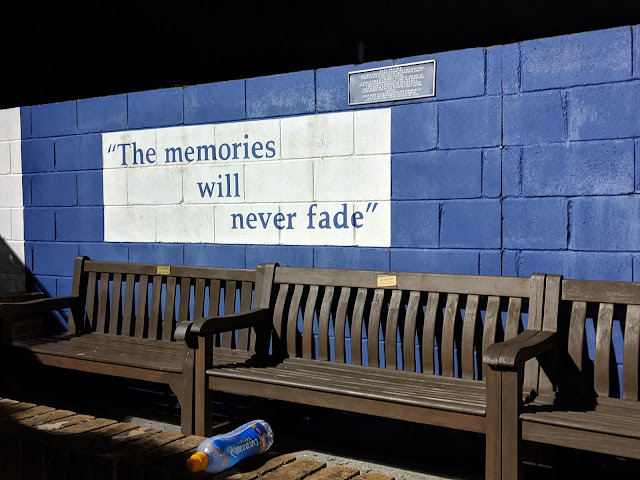 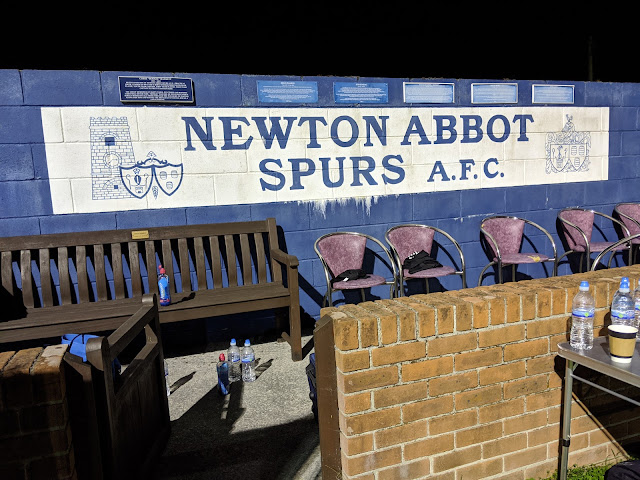 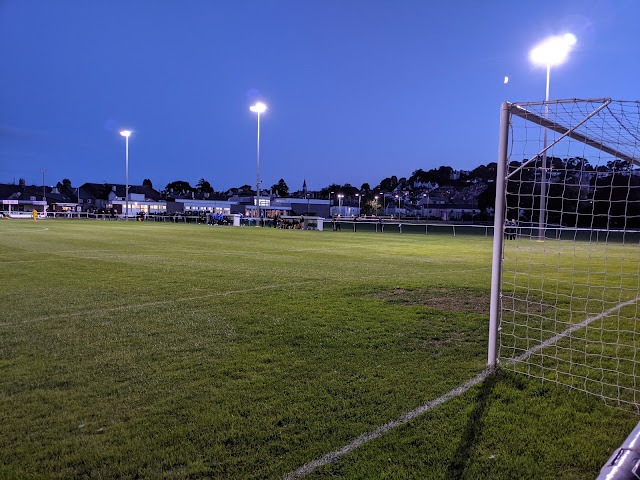 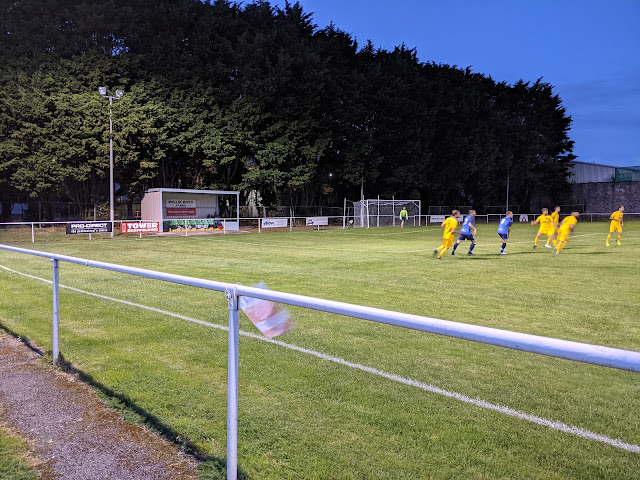 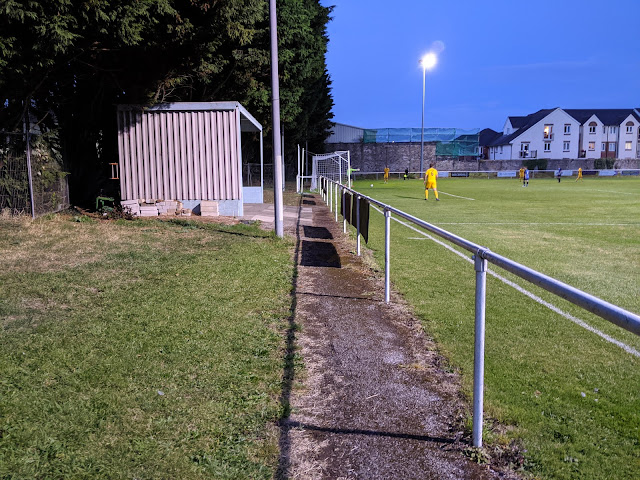 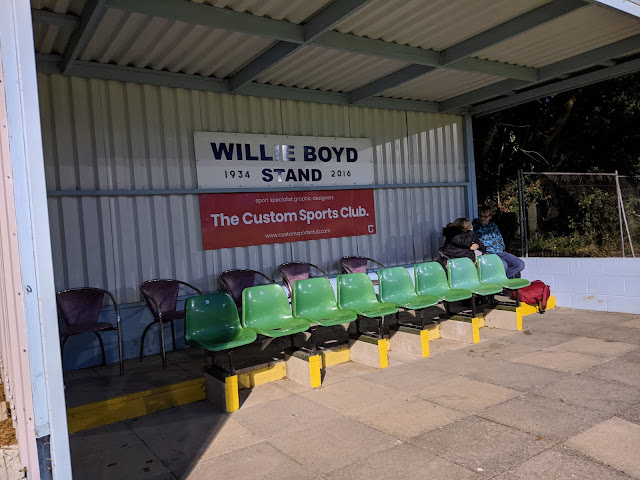 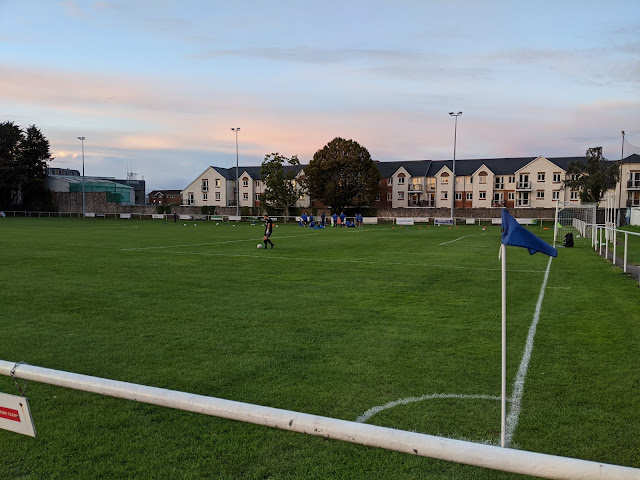