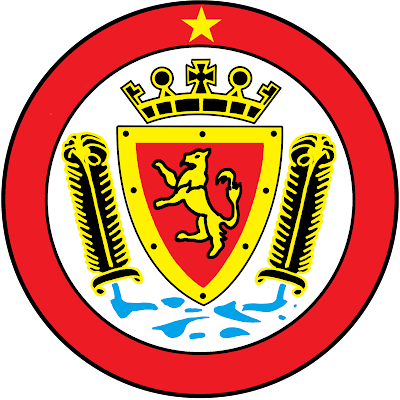 Saltash United's best-ever FA Cup run came in 1987. That year they beat Taunton Town, Ottery St Mary and Tiverton Town before losing at Farnborough Town in the 4th Qualifying Round. They've twice reached the 1st Round of the FA Trophy. In the FA Vase, they've reached the 3rd Round on three occasions. Local cup wins include the Cornwall Senior Cup on seven occasions, the Cornwall Charity Cup in 1951 and 2001, the Western League Cup in 1987 and 1988, the SWPL Charity Bowl in 2008 and 2019, the South Western League Cup in 1953, the SWP Charity Cup in 2008 and the SWP Walter C Parson Cup in 2019. The town of Saltash has a population of 16,000 people and was judged the most desirable place to live in the UK according to a 2009 survey. 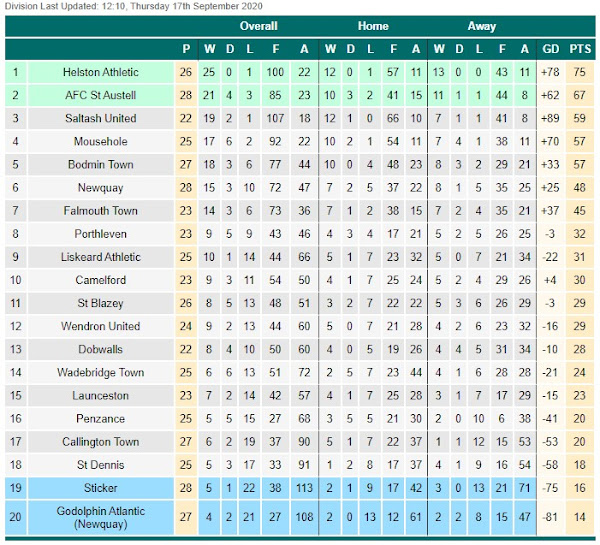 MY VISIT
Back when deciding where to go for my week off, I was really keen to see a game in the FA Cup. Therefore, I was pleased when the FA Cup draw threw up Saltash United v Cirencester Town. It was an attractive tie with a chance of a giant-killing and fitted in with my plans of a trip down to the Westcountry. It was easy enough to buy a ticket online the evening after the draw and so I did so at the cost of £7. The day of the game came and I was camping overnight in Crediton after the game the day before. I woke at my usual work time of 4 am and unable to get back to sleep read the previous nights programme and league handbook by torchlight. With no mobile signal, I was limited in what I could do, so I listened to a couple of podcasts before it got light. I decided to pack up as soon as it got light and so after doing so and having a shower, I left at 7.45. Another good reason to leave early was the single track road that I had to go along was quite long and it would be a right pain if I was to meet someone coming the other way. Thankfully, there was just one car and it was in a pretty convenient spot. I drove to Tesco as I needed petrol and some shopping. Whilst I was there, I also had a nice cooked breakfast and a drink. With everything being half price thanks to an offer, it only set me back £2.95 and it was also a convenient place to sit and type some of my blog. I left around 9 and visited a few grounds - Alphington, Buckfastleigh Rangers, Ivybridge Town and Elburton Villa to get photos. I also stopped at a local farm shop, picking up some ciders I'd not had before. 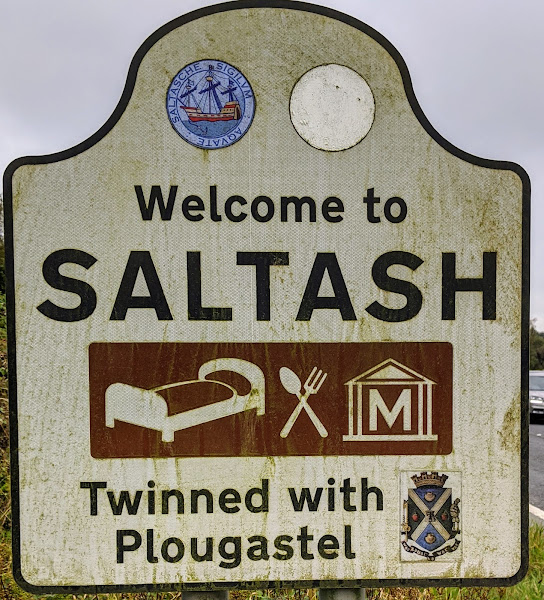 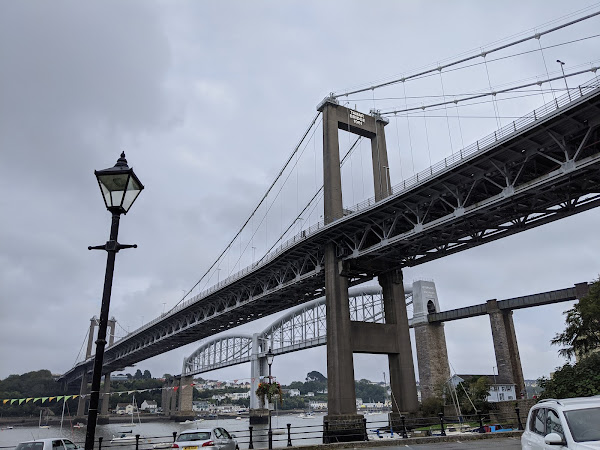 I was at my campsite by 12.30 and pitched up in light drizzle which thankfully soon stopped. I spent some time sorting out my photos and uploading last night's blog. By the time I'd finished and caught up with things it was 3.15 and with a 55-mile walk to the game, I decided to leave. It was actually longer than that as I took a safer route. It involved a lot of walking along fast roads with no pavement and so I vowed to get a taxi back. After getting some pictures of the Tamar Bridge and waterside, my first pub was the Union Inn with me getting there at 5.15. I had a pint of Sam's Dry cider and was glad of the rest and the chance to catch up. After that, I went to the Two Bridges Inn and had a pint of Cornish Rattler. From there, I tried to find a takeaway, but all I found were vastly overpriced. Instead, I got some chicken from the Co-Op and walked to the ground. All the COVID stuff was taken care of and it was a breeze with my pre-booked ticket. I had a pint of Berry Rattler in the bar as kick-off was still 45 minutes away. After downing that I got myself sausage and chips for £3.20 which was far better value than anywhere outside the ground. I sat on the halfway line on the other side of the pitch thanks to a random chair being left there. 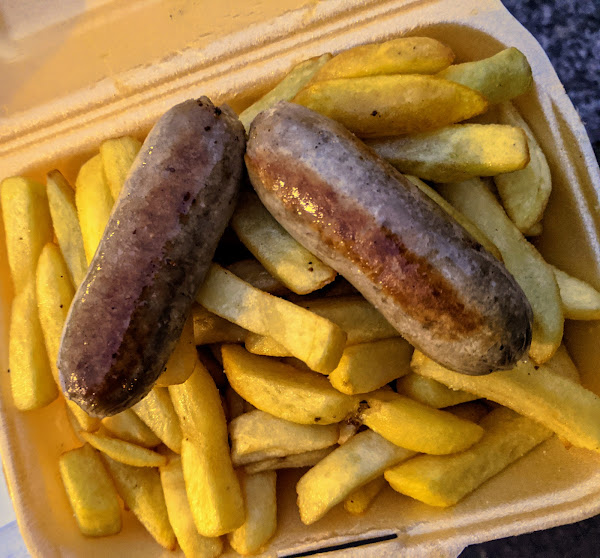 The hosts were unbeaten in the FA Vase and league so far this season. To get this far, they'd beaten Plymouth Parkway and Paulton Rovers, both of whom play at higher levels. Visitors Cirencester Town played in the step 4 Southern League Division 1 South and had started their league campaign with a 2-0 win at Bristol Manor Farm. They'd won 3-0 at Flackwell Heath to get this far in the cup. The game started with Saltash well on top, much to the chagrin of the Cirencester manager who was very animated barking orders at his team. The hosts were ahead after 11 minutes when a cross from the right was headed home at the back post by Ben Holter. Saltash continued to dominate, a shot narrowly over the bar on 21 minutes saw them come close again. On 23 minutes, they doubled their advantage, another cross from the right was met by a glancing header from Sam Farrant. Cirencester quickly pulled a goal back, a penalty was awarded for a trip just inside the area and Ross Gabe converted.  After the break, Saltash restored their two goal advantage when a good through ball found Reece Thompson who finished calmly beyond the advancing keeper from around 15 yards. The visitors were seeing quite a lot of the ball, but not doing much with it. Their number 4 let frustration get the better of him and tripped a Saltash man as he tried to get away. He was booked for that and there were plenty of other flare-ups too. There was a late rally by Cirencester and they had a shot cleared off the line but in the end, it was a fully deserved win for Saltash against a side that played two levels higher.

The lead is doubled on 23 minutes but Cirencester halve the arrears through a penalty pretty much straight away https://t.co/fJVr4M2TKa pic.twitter.com/59rvP3qfwn

After the game, I tried a number of taxi firms before success. Double 4 taxis were decent enough, just under £12 for the 5-mile journey. I was back by 10.15 and got into bed trying to sleep. I didn't have the best night's sleep as it was very rainy, something that was not scheduled earlier in the week when I looked. Thankfully I was kept dry though with my tent doing a great job. 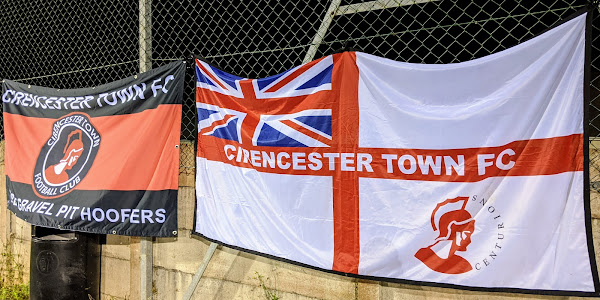 THE GROUND
THE KIMBERLEY STADIUM is a decent setup for step 6. There is just the one covered stand which seats around 200 and is attractively designed. The rest of the ground is open standing, with hard standing around the pitch. There is also grass banking on two sides which aids social distancing. The bar at the ground offers a reasonable range whilst a better bet if you have time is the Union Inn which is in town, just over 15 minutes walk away. The town is limited in terms of takeaways, but luckily the food at the ground is both decent and well priced. 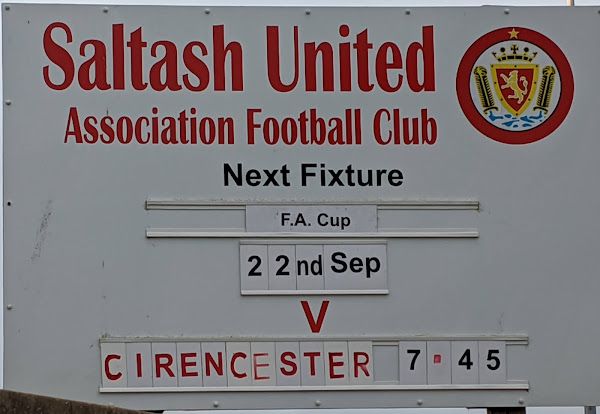 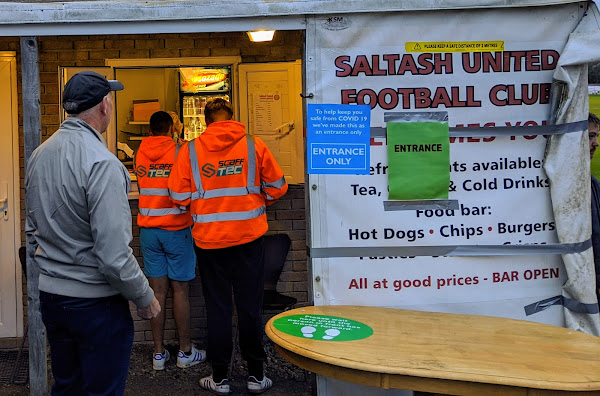 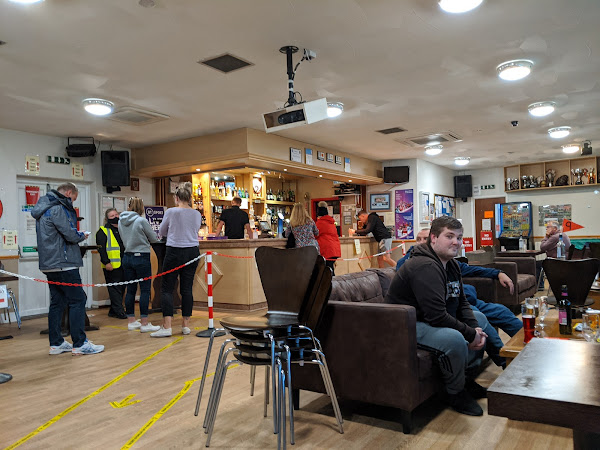 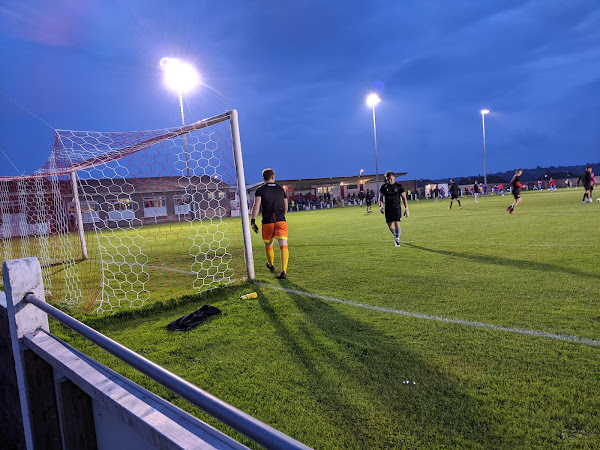 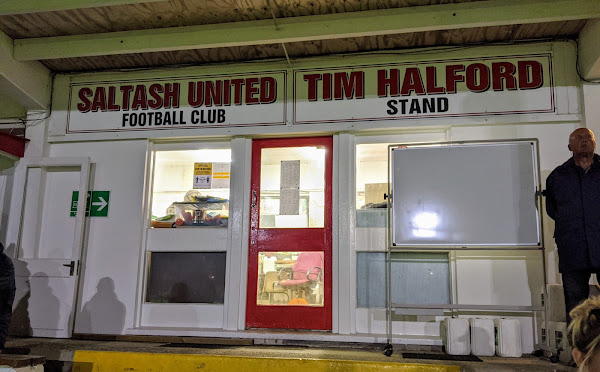 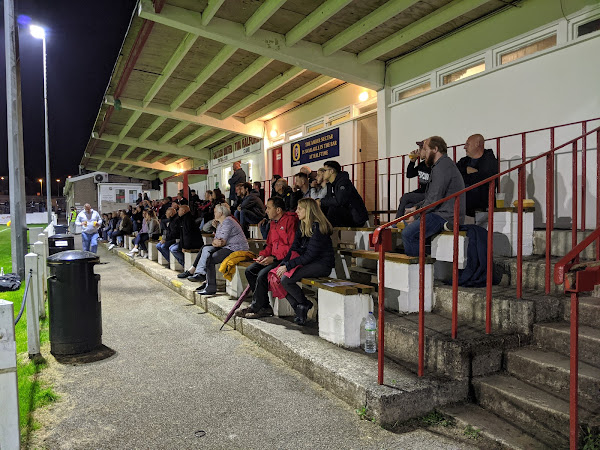 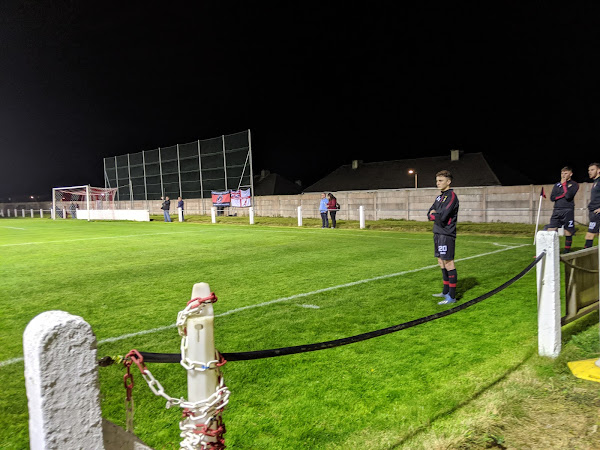 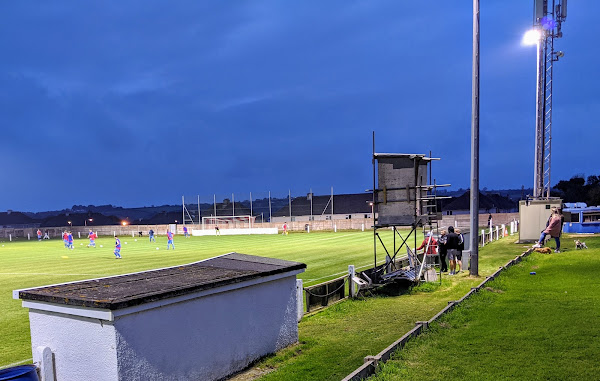 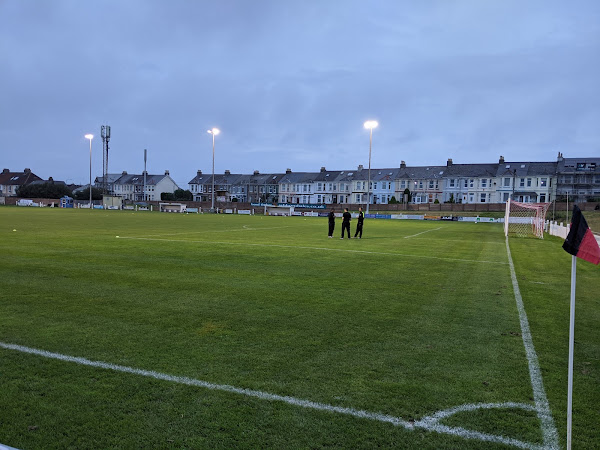 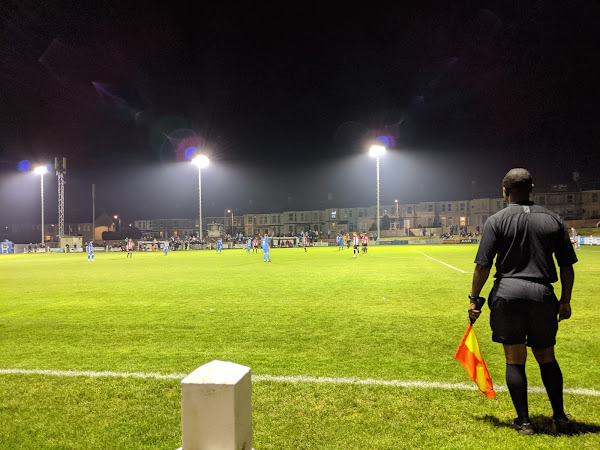 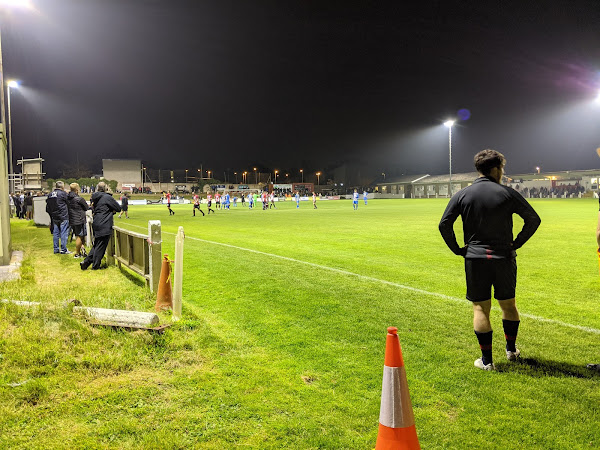 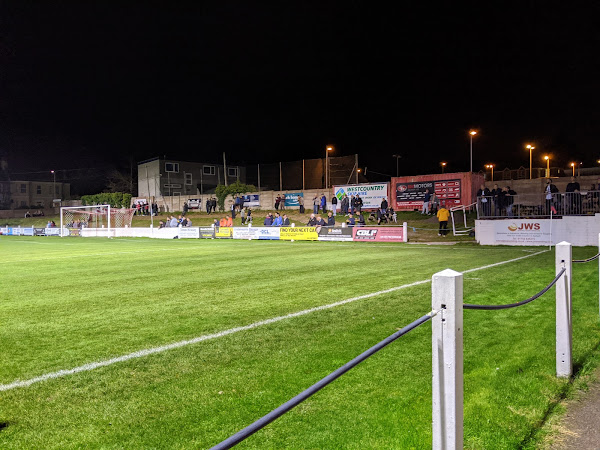 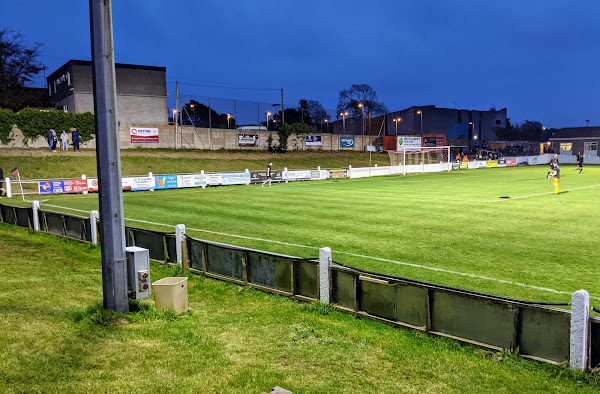