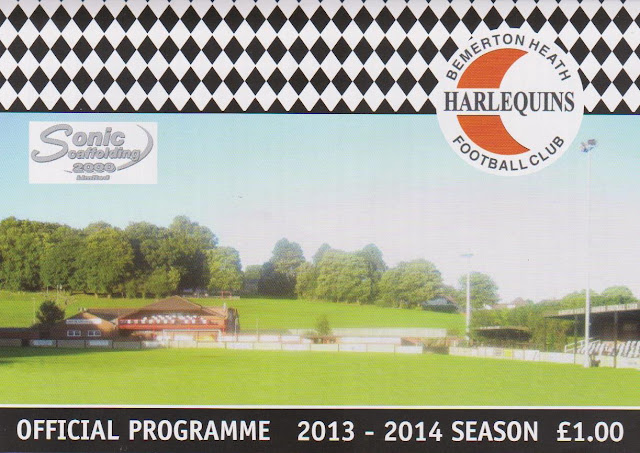 The club was established in 1989 following the merger of three local sides - Bemerton Athletic, Bemerton Boys and Moon. They joined the Wessex League upon formation and have played there ever since. Whilst the league was a single division, finishes ranged from 3rd in 1992/93 to 18th in 1990/91. In 2004 the Wessex League expanded to two divisions, Bemerton Heath Harlequins made the cut for the upper tier and have remained there ever since. They've never finished lower than 14th and in twice in a row in 2011 and 2012 they were runners-up.

In the FA Cup, the best ever run was in their debut season of 1992/93. After winning 2-1 at Sholing Sports in the Preliminary Round they faced another trip, this time to Abingdon United where they won 5-0. They'd have to again for the 2nd Qualifying Round, this time to Isthmian Premier side Bognor Regis Town. It would take four games to separate the sides, two at each side's home ground before Bemerton Heath Harlequins won 1-0 in the third replay. Their dream came to an end in the 3rd Qualifying Round with a 1-0 loss at Witney Town. In the FA Vase, the club has twice reached the 5th round, losing at Clitheroe in 1999 and Spennymoor in 2013. Local cup wins include the Wiltshire Senior Cup in 1993 and 2011, the Wessex League Cup in 2010 and the Russell Cotes Cup in 2012. The club's record attendance of 1,118 came for a 1994 FA Cup Preliminary Round game against Aldershot Town. 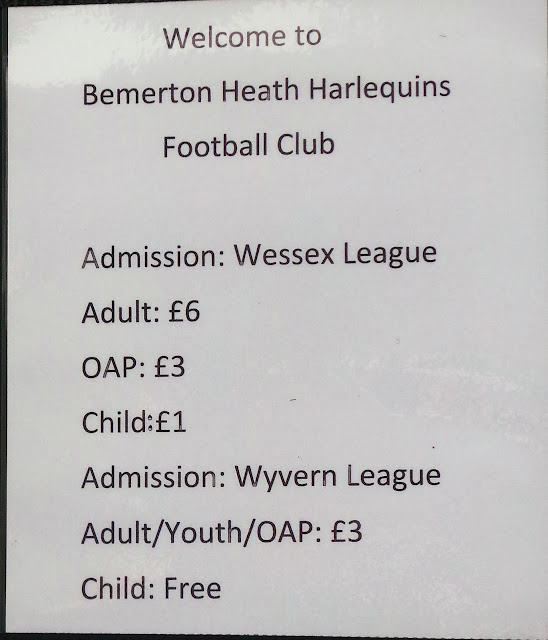 I knew that I'd be on my own on this Tuesday as the two hoppers I usually go to games with were both busy. I was initially hoping to keep it local but with no revisits taking my fancy and all the new grounds being a long way away, I decided to look for something that was down south and that was also in the FA Cup or FA Vase. There were around 5 or 6 options, with me eventually whittling it down to two options - those being Corinthian v Fisher in the FA Vase and Bemerton Heath Harlequins v Thatcham Town in the FA Cup. The former ended in an exciting 4-4 draw and would save me 60 miles on the round trip, but it was against two teams from the same league. I decided to put it to the vote on Twitter and the FA Cup game came out on top - the original match having been drawn 0-0 at Thatcham Town, probably the highlight of Bemerton Heath Harlequins' disappointing start to the season so far.  They'd yet to win in the league with a home draw against Bashley their sole point of the season, the defeats coming against Sholing (0-4) and Tadley Calleva (0-3). Cup form had been a little better - a win over Cowes Sports (1-0) had seen them progress in the FA Cup, whilst Hythe & Dibden had been defeated on Saturday (2-1 after extra time) to progress in the FA Vase. Thatcham Town's start to the season had been fairly disappointing too, last season's Hellenic League champions had won just 1 of 4 games so far, albeit a thumping 6-0 win against Fleet Town on 27th August. 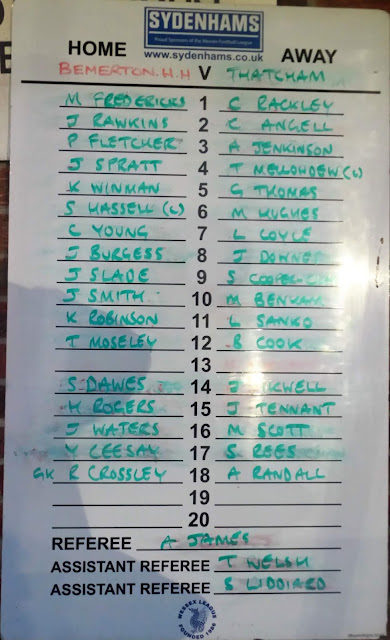 On the day of the game, it was my day off work. I did the usual thing of walking down town, doing some shopping and getting a lift back with my Dad. After lunch, I whiled away the afternoon, catching up on various things before leaving around 4.30. It was a good journey down, even with a brief stop I was there by 6.30. I was in need of dinner so I went in search of the local chippy. Contrary to the impression I gained, it was actually 15 minutes walk from the ground, so I decided to drive. It was a decent decision as my chicken nuggets and chips took a while to be cooked, but they were tasty and good value for the £3.20 I paid. From there I went back to the ground, meeting a Leicester based hopper called Alan who I’d not seen for a while. We had a brief catch up before I went into the bar to get some pictures. When I came out, the turnstiles were not yet open, so I had another chat before they opened at 7.20. after going around and getting pictures, I caught up online, including news of Wycombe’s Checkatrade Trophy game at Northampton. The entry there was a bargain at £5 in a desperate attempt by the Football League to convince themselves that adding Premiership youth teams into the competition was not harming attendances. I’d have been there in any other competition, perhaps even a friendly but I decided to put principles over personal enjoyment and continued my boycott. 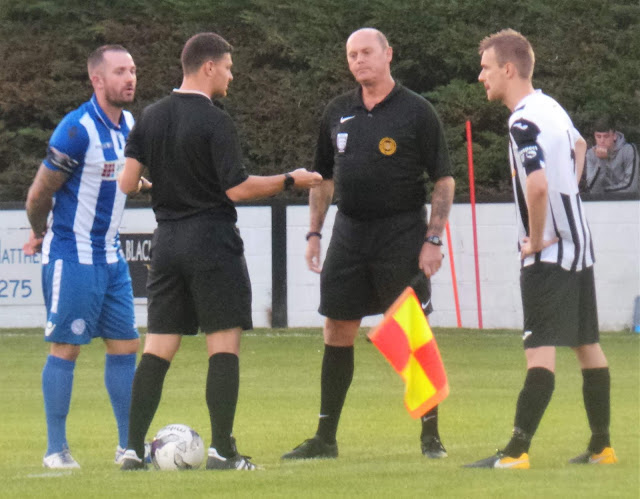 The purchased programme was pretty poor, even for the quid paid. The outside was five years old from the 2013-14 season and the insert was pretty basic too. In this situation, I’d rather pay 20p for a teamsheet rather than a forced publication where the heart is not truly in it. Thankfully the game was far better, attracting 154 fans, their biggest crowd in 3 years, I believe. The game started with Thatcham creating a fair few chances in the opening 10 minutes, but gradually the hosts took control. They made it 1-0 on 25 minutes when a looping free-kick from the right was headed home by Jake Burgess. They doubled their lead a few minutes later, this time it was a finish by Kelvin Robinson, though I didn't have the best view of it as I was up the other end of the pitch.  The third, on 40 minutes was the goal of the game and the goal of my season so far, Charlie Young lobbing Thatcham keeper Chris Rackley from some 35 yards out. The visitors had been really poor in the first half, but they stepped it up for the second period. 52 minutes saw them reduce the arrears, James Tennant with a scrappy goal from close range. A penalty was awarded to Thatcham Town on 62 minutes, Shane Cooper-Clark's effort was initially saved but he followed up for the rebound. The rest of the game saw the visitors put pressure on Bemerton Heath Harlequins, but never really come close to scoring. In fact, it was the home side that came closest to getting a goal, very nearly being caught out on the break and needing a goal-line clearance to stay in the game. From the resulting corner, the hosts tried to keep it in the corner to run down the clock and although the ball broke free, soon enough it was full time and Bemerton Heath Harlequins could celebrate a giant-killing. Thery will now face a tip to Southern Premier side Taunton Town on Saturday.

Thatcham Town second goal from last night, penalty saved but was followed up by Shane Cooper-Clark. Finished 3-2 to Bemerton Heath Harlequins
A post shared by Russell Cox (@russ_wwfc) on Sep 5, 2018 at 6:17am PDT


I met various other hoppers on the night, including Cherry Hopper off of the Non-League Matters forum. I left at 9.40, hoping to tune in to BBC Three Counties on my phone. However, they were doing their usual daft midweek thing of not broadcasting the show over the internet for 'commentary rights' reasons, even though it was just a round up. Wycombe won 1-0 in any case, thanks to a goal early on from Scott Kashket. The other game I was considering going to - Corinthian v Fisher also ended 3-2 to the home side. Instead, I listened to the end of the Yeovil game on BBC Somerset, before switching to other stations for the journey home. I made good time, getting in at 11.15 though I didn't go to bed straight away. As ever, I found it tricky to sleep after football, but I felt fine when I awoke for work at 4 am the following morning. It had been an enjoyable night, but a pricey one, costing £36 including fuel, food, entry & programme, my most expensive trip of the season so far. 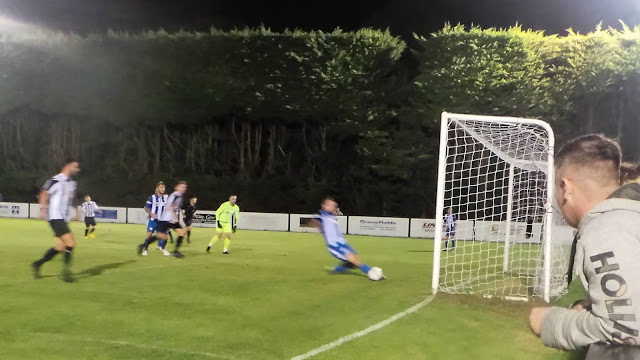 MOON PARK as it has recently been renamed (in honour of one of the teams that were part of the merger that formed the club) is on the edge of a housing estate. It is surrounded by pleasant greenery and on three sides of the ground are trees which give it a more enclosed feel. The most interesting stand is behind the goal and is part of the clubhouse. Approximately 30 seats are available on the balcony and although these appear to be reserved for VIPs, it’s an aesthetically pleasing stand. There are two further areas that provide cover - a decent sized main stand with seating for between 200-250 and this has further standing behind. There’s also more standing cover to the side of this, around 150 capacity. The rest of the ground is open, with a few raised areas.


The bar is spacious and pleasant, this has Sky Sports and a reasonable range of drinks. The cider on draught is from Blackthorn, but I’m unsure of prices. There’s also a tea bar available, though I didn’t see the price list I had a good hotdog for £2. Burgers are also available, as are snacks and drinks. Not too far away from the ground is Mitchell’s Chippy which has won local awards and provides decent value. 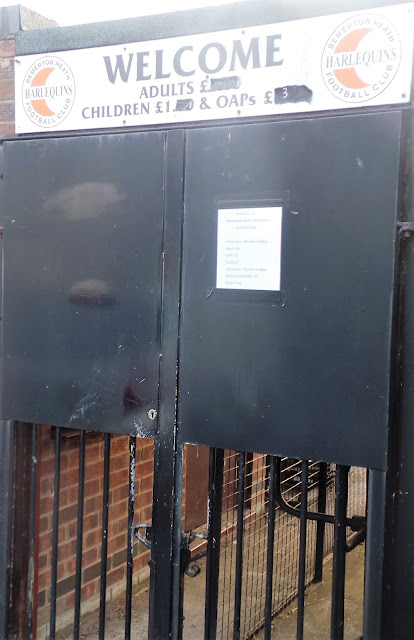 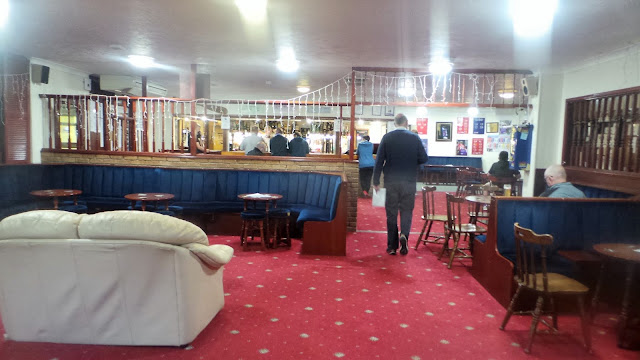 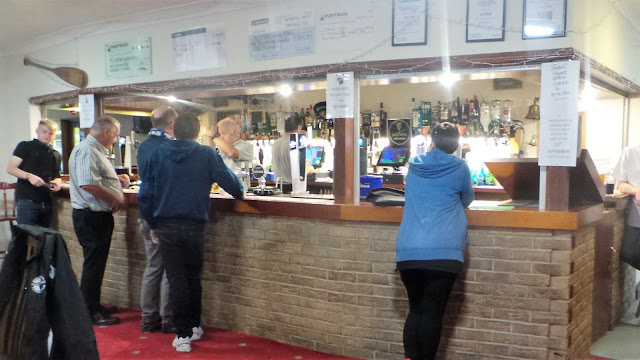 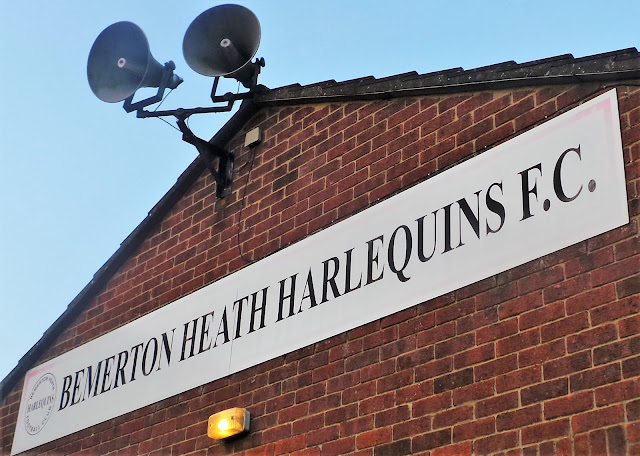 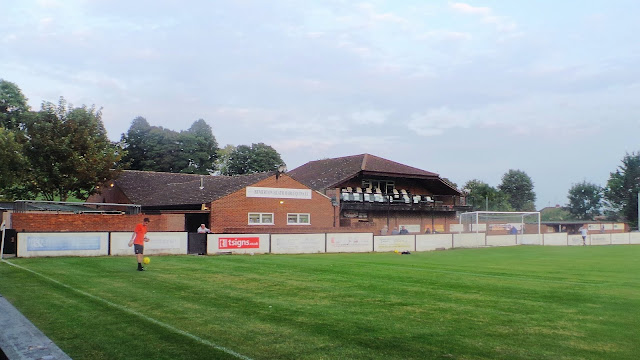 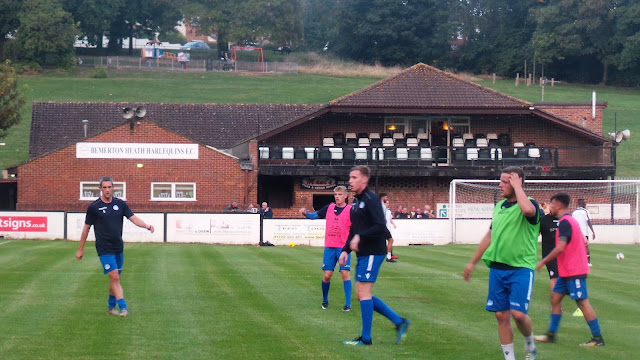 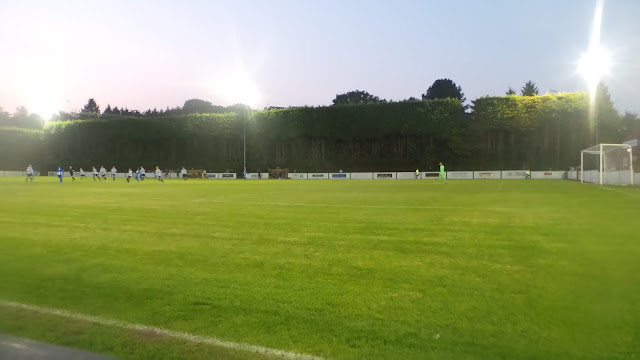 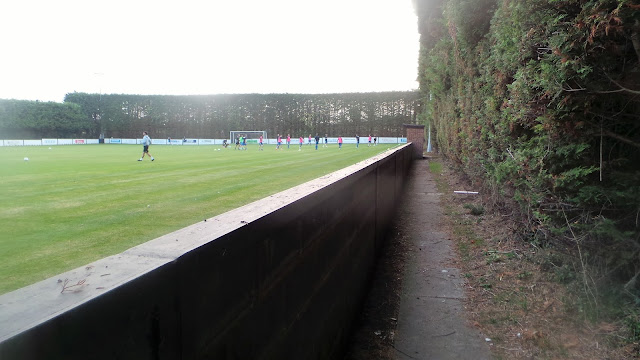 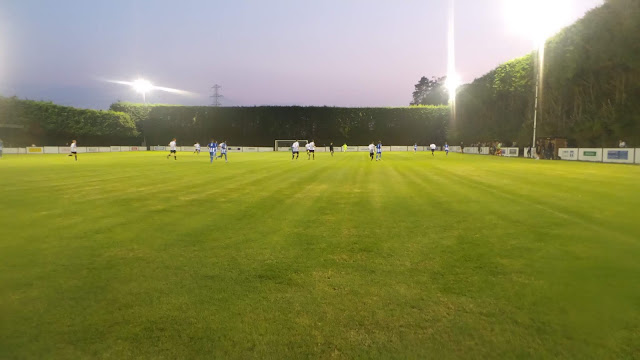 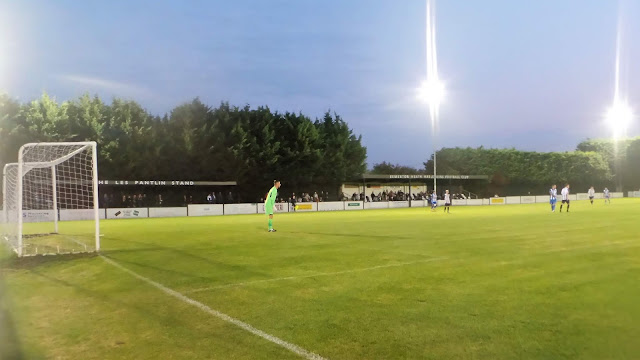 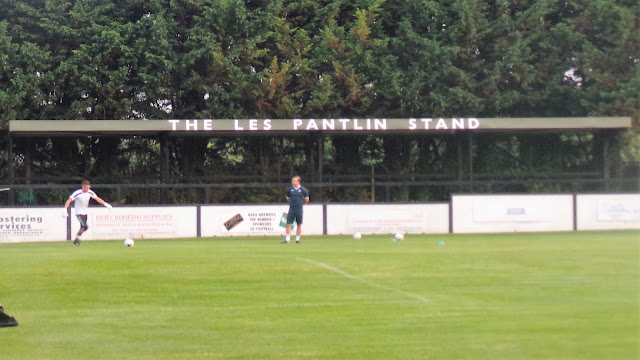 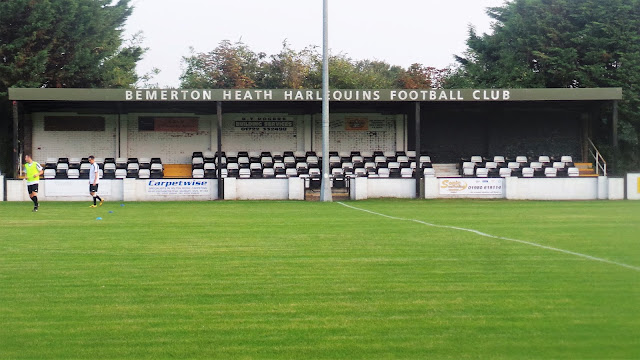 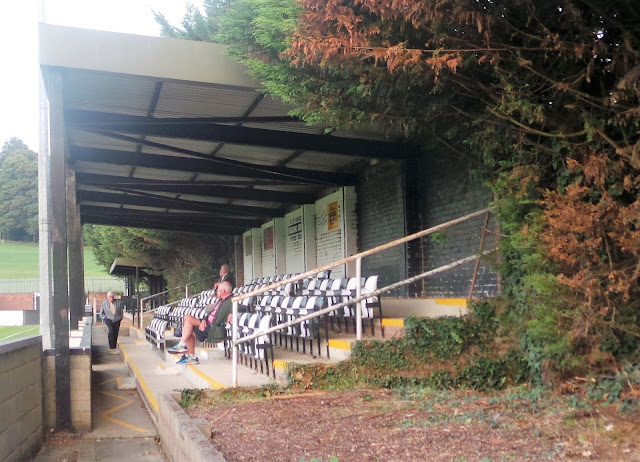