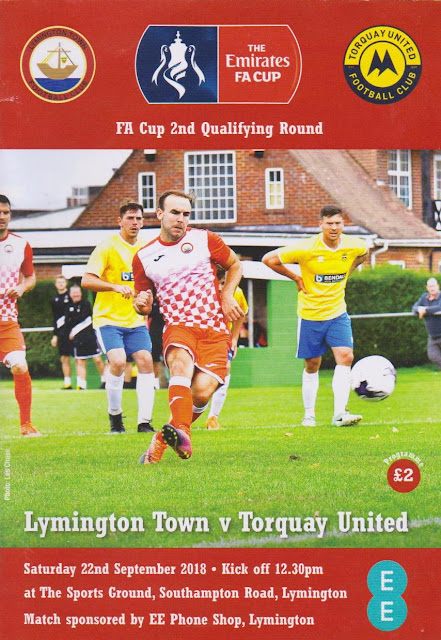 The club was established as far back as 1876 as Lymington FC and initially joined the Hampshire League in 1903. There were plenty of times where they left and came back as well as moving around its various divisions. They were East Section champions in 1923, West Section champions in 1927 and Division 3 champions in 1967. In 1986 they merged with Wellworthy Athletic to form AFC Lymington and then 12 years later another merger took place with New Milton Town to become Lymington & New Milton. This resulted in the new club moving to New Milton and so Lymington Town established a new club to remain in the town. The New Milton club retained the place in the Wessex League, initially earned in 1986 whilst the Lymington club had to start in the Hampshire League. After spending a season in Divison 3 where they finished 3rd, reorganisation saw them placed in the in the Premier Division. After a 7th place finish, they joined the Wessex League in 2004. Starting in the second tier, they were champions in their first season and have played in what is now known as the Premier Division ever since. There have been a few close calls with relegation but last season Lymington Town enjoyed their best ever finish as they ended the season in 8th place.

The original Lymington club enjoyed their best season in the FA Cup in 1951, beating Blandford United, Poole Town & Portland United before defeat in a replay at Barnstaple Town in the 4th Qualifying Round. AFC Lymington reached the 3rd Qualifying Round in 1992 as they lost 1-0 to Cheltenham Town whilst the current incarnation are enjoying their best run yet. They've beaten Sandhurst Town 5-1 in the Extra Preliminary Round Replay after the initial game ended goalless while Frimley Green were beaten 2-0 in the Preliminary Round. Lydney Town were next up in a game played at New Milton Town where the teams shared a 2-2 draw. I was present at the replay in Gloucestershire as they triumphed 2-1 to set up a plum tie against Torquay United. The best run in the FA Vase came in 2007/08 - Fareham Town, Blackfield & Langley, Marlow United, Hassocks & Sherborne Town were beaten before a defeat to Crowborough Athletic in the 4th Round. The town of Lymington has a population of 9,385 according to the latest census and is famous for its history in sailing and further back, salt mining. Famous people from Lymington include the DJ 'Adamski' who collaborated with musician 'Seal' to produce the 1990 hit 'Killer' which hit the top of the charts in both the UK and Belgium. 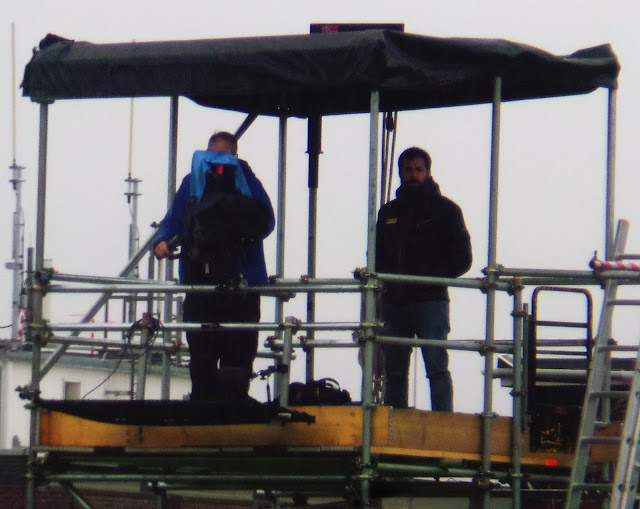 Initially, on this day I'd been planning to go to Portsmouth v Wycombe Wanderers to redo my blog for that ground. But with my parents away, I'd be footing the entire bill myself which could run to over £60. I decided to wait until the supporters club announced what pre-match pub they would be stopping at. When it transpired that the meals were around £15 each, I decided to look elsewhere. The FA Cup was my first port of call, with a number of ties taking my fancy. The best of these was Lymington Town v Torquay United. Not only was it a great tie, but I'd seen Lymington overcome Lydney Town in the previous round. Therefore I was really pleased when the BBC announced it as their 12.30 kick off to stream online. This meant that I could double it up with a 3pm kickoff, in the end, I chose Bashley v Fareham Town. I was pleased to have fellow hopper Anwar on board as it would give me company and help out with fuel costs. I also planned to get their early as the town was really close by and it would be a big crowd. 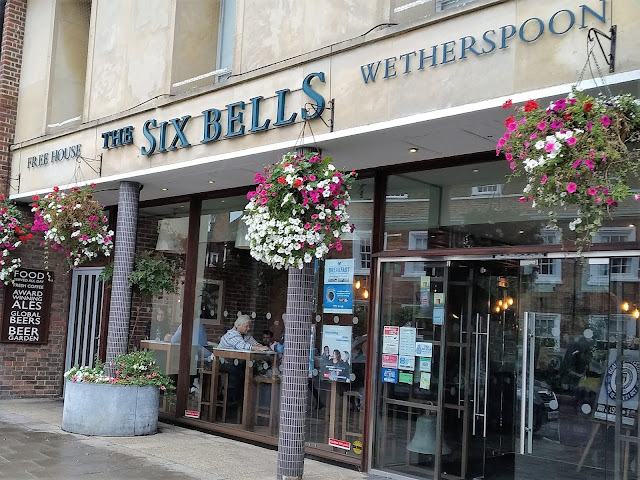 The day of the game came and I awoke around 7.30, having only got to bed around 2 the previous night. It was all a bit of a rush and I was supposed to out of the house by 7.45. Even though it was getting on for 8 when I left, I still arrived to meet Anwar at our pre-planned 8.15 meeting time. Soon enough, we were on our way and for once, it was a good journey. We were in Lymington by 10.30 though my sat nav directed me to a tiny public car park rather than the club one. So, we programmed our next stop of Bashley in and parked in a side road away from the town. It would make getting away easier later on, but there was a near miss when I parked in a residents only place, it was only a postcard-sized sign about 100 feet down the road that I noticed thankfully. From there we headed into town which was very pretty and had a market on. First stop was Poundland for some drinks, then it was Wetherspoons number 169, The Six Bells, for a pint of Pear Mania for a very reasonable £2.95. There were plenty of Torquay fans in there, with them expecting to bring 400. Outside there were plenty of dogs around, more than I’ve seen in any other town in fact. Last stop was a local bakery for a slice of rocky road before heading to the ground. 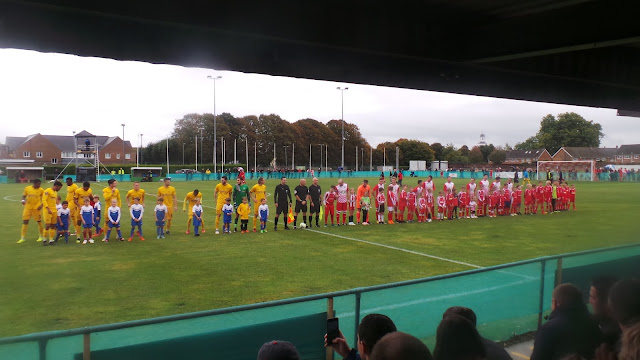 Entry was an excellently priced £6 with the programme at £2. First stop was the bar where I had a new cider, Orchard View for £3. It was only 11.20 so I sat in the bar and caught up online, as well as typing this blog. It was pretty rainy by now, so I joined Anwar in the stand and chatted to some fellow hoppers including a bloke born in Wycombe and a few familiar faces who were good company. The game was played in very wet conditions and so the stand got pretty full of fans wanting to keep dry. As for the game, a match report is pasted below but Lymington matched Torquay for the first 36 minutes and even had a few good chances of their own. The visitors' opener came via an unfortunate own goal when Lewis Brailey deflected Ben Wynter's cross into his own net. Jamie Reed doubled the advantage a couple of minutes later, tapping home after good work by the highly impressive Opi Edwards who was on loan from Bristol City and ran Lymington ragged all afternoon. The hosts would not concede again for another 20 minutes, but in the end, they looked tired against a full-time outfit and ended up losing 7-0 with keeper Nic Jones turning in an impressive performance to keep the score down. It was a good day off the pitch for Lymington Town though. The attendance of 639 was good, though it might have been even better had it not been so rainy and they hosted very well given the larger than usual crowd. 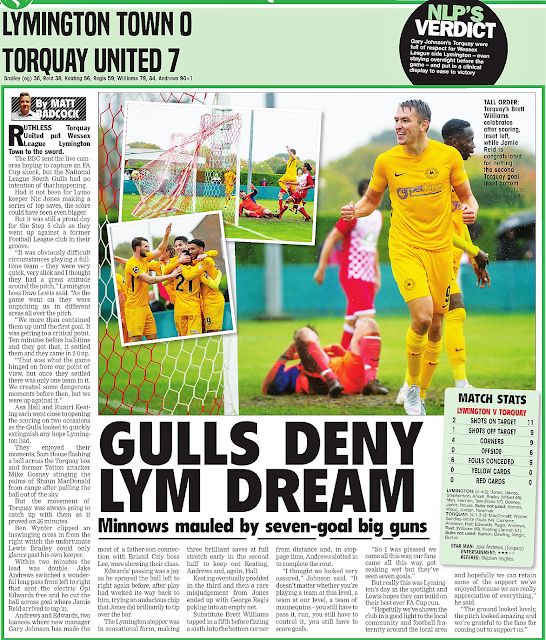 
THE SPORTS GROUND is a pretty decent venue for the level. The sole covered area is the main stand, this holds 200 according to the 1993 Non-League Directory though in reality, because it is benched seating, you can squeeze a lot more in. The rest of the ground is open hard standing and is well kept. Facilities at the ground include a tea bar from an outside caterer, though this may only have been for the cup match. The bar itself is smart and modern and has an interesting range of drinks. It also has a small serving hatch that sells pasties, pies and hot and cold drinks. Many more options are available in the town, which is a short walk away and include a decent Wetherspoons. There's a decent sized car park at the ground, though you should aim for the entrance off Avenue Road as the one on the postal address directs you to a council car park which charges and has a maximum stay of 3 hours. 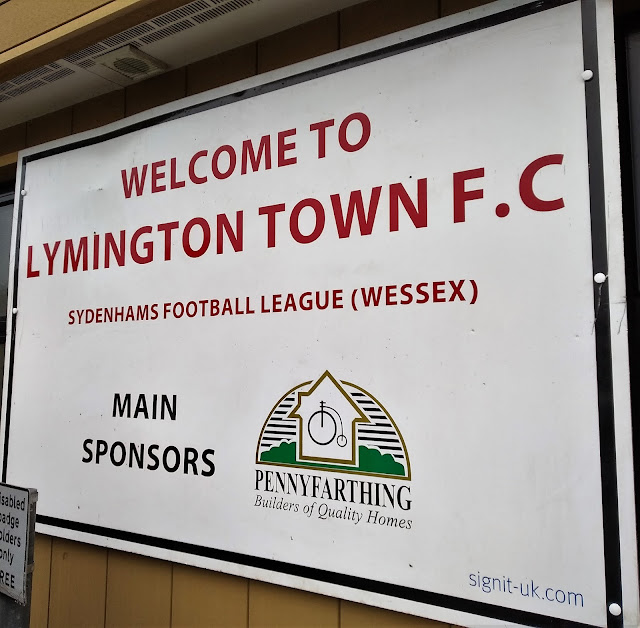 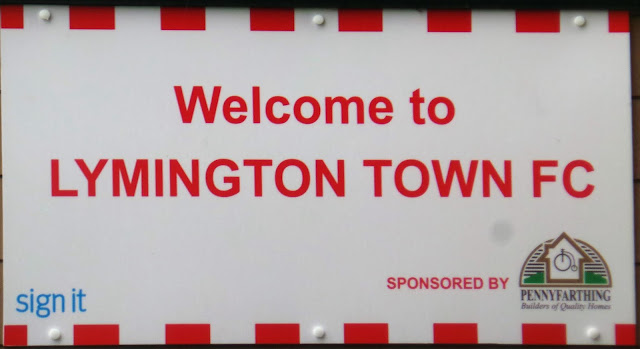 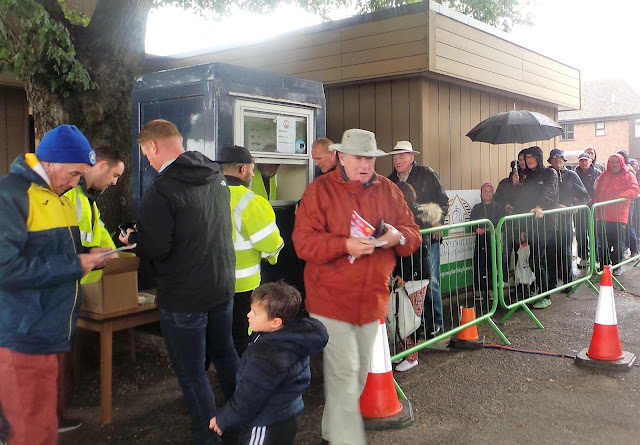 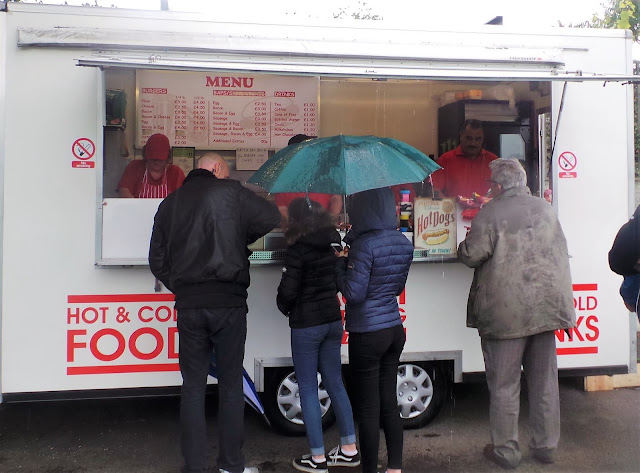 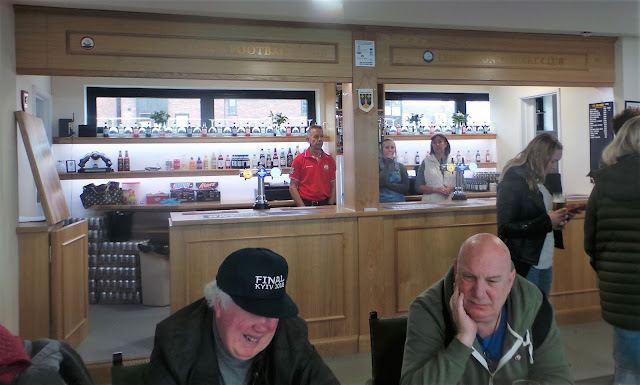 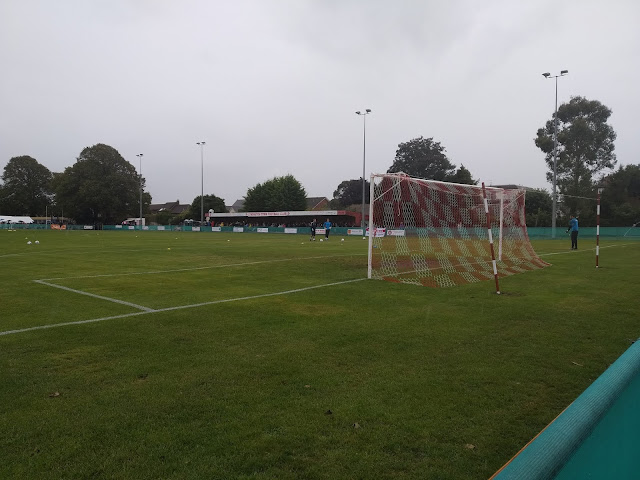 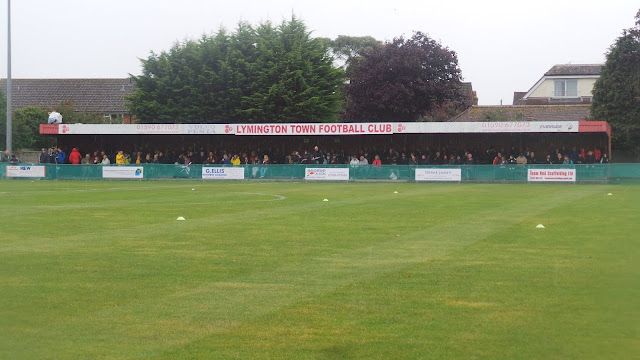 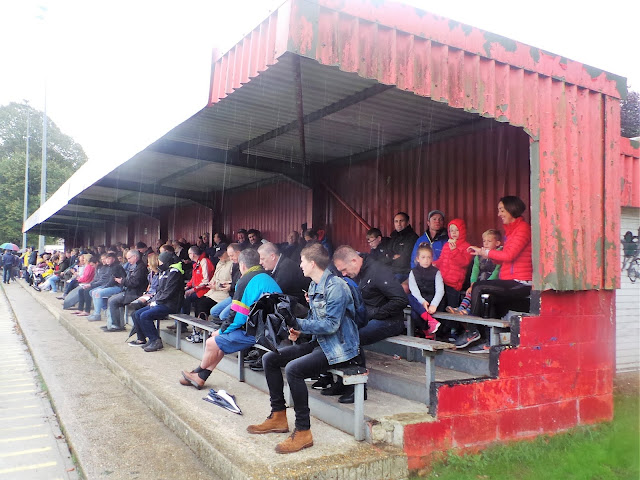 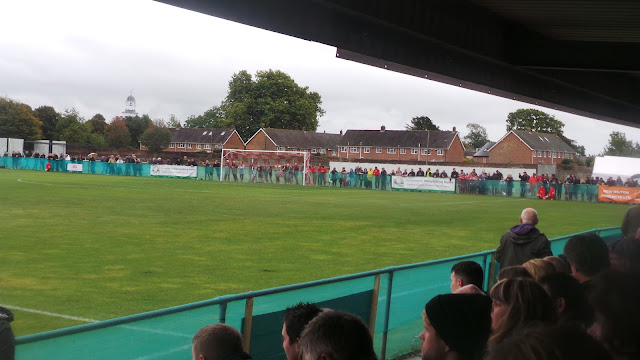 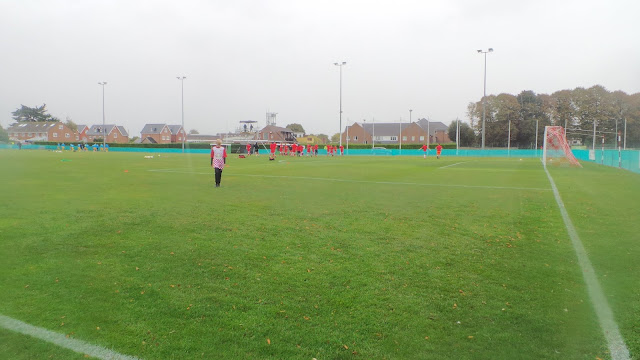 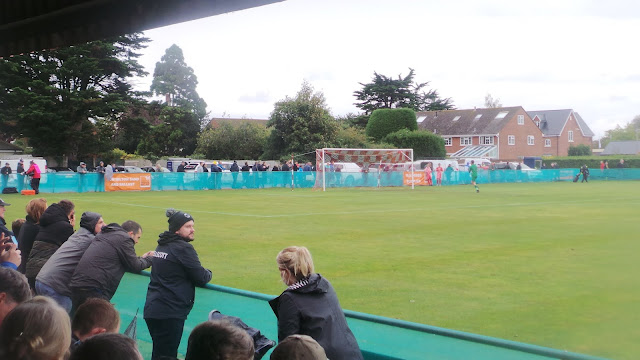 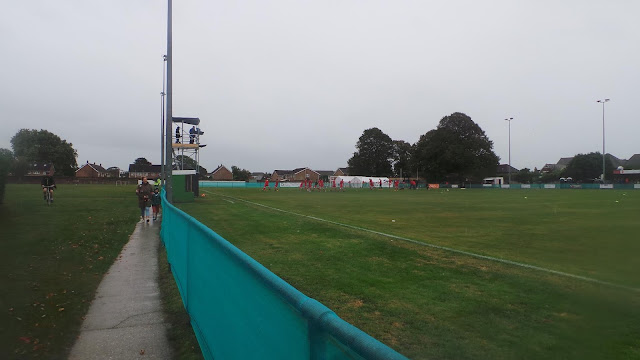 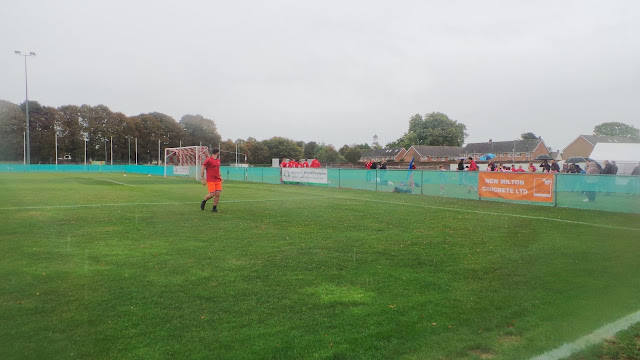