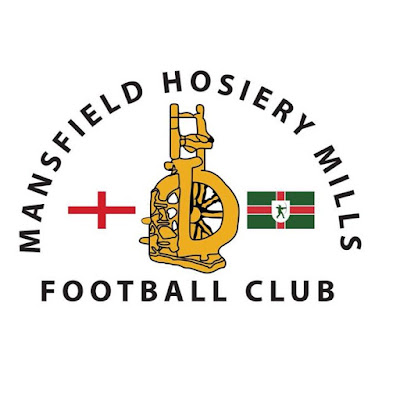 There is very little information online about the club, but one thing that I can be sure of is that they started out as the works team of Mansfield Hosiery Mills, a local textile manufacturer. The factory has long since been closed, but the social club arm still remains, with a cricket club, formed in 1947 also playing on the same complex. The football team currently play in the Notts Senior League Division 1, this sits at step 8 of the Non-League Pyramid or Level 12 of the English League structure. Last season they finished in a mid-table position of 7th, that after a 9th place finish in Division 2 the previous year. The only other record I can find is of the 2014/15 season when they withdrew mid-season from the Midland Amateur Alliance. They were Division 2 champions of this league in 2012.

They are based at The Fieldings, which once hosted step 5 football in the NCEL Premier. Formerly known as North Notts FC, they changed their name in 2002 and this brought about a period of great success. Runners-up in the CML Supreme Division in 2003 allowed them to progress to NCEL D1. They won another promotion to the NCEL Premier in 2005 and in their first season enjoyed a record high finish of 7th. In 2008, they dropped back down into the Central Midlands League, generally doing well. They were champions in 2013 and earned another promotion, this time to the East Midlands Counties League. Despite an 8th place finish, the club appears to have folded at the end of the season, owing to problems with the lease on the ground. 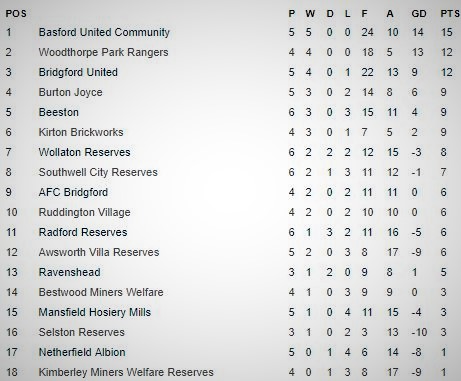 Opportunities for fellow hopper Chris and I to do a groundhop together were extremely rare. A combination of him being unavailable on Tuesdays and Saturdays and me having to be up for work at 4am in the morning had limited our outings to just one in the past year. However, the Notts Senior League was to be our saviour, as they scheduled regular Friday night football. A lot of the grounds were pretty basic, so I'd resisted until now. But one fixture caught my eye - Mansfield Hosiery Mills v Kirton Brickworks. This was being played at the former home of Sutton Town FC, a ground I had visited 10-15 years ago on the way to a Wycombe away game at Bradford. Knowing that it was a decent venue, I made contact with Chris earlier in the week and happily, he was available. Plans were put in place to go, and so I started my research for the trip. 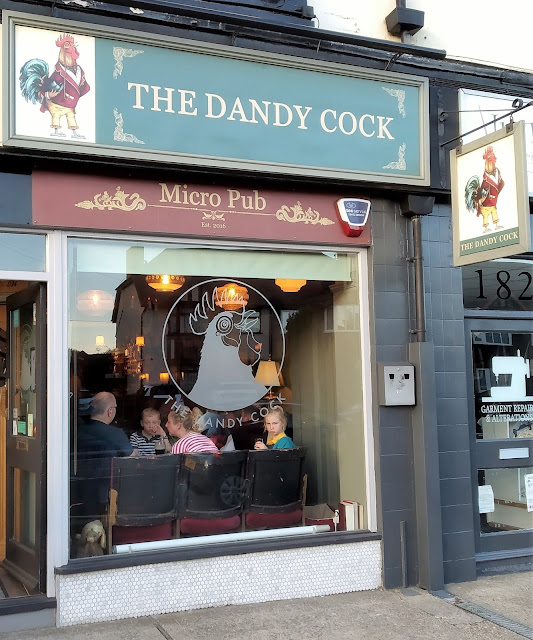 On the day of the game it was a busy day at work and so I didn't get back home until after 1.30. That left very little time to have lunch, have a bath, catch up with things and get ready to leave, just before 3. Getting to Chris was an absolute nightmare. There were roadworks in Aylesbury town centre which added 15 minutes to the journey, then for some reason, the authorities decided to close the A4146 dual carriageway. This led to me being diverted through Leighton Buzzard where the town was unable to cope with the deluge of traffic. As a result, there was a further 35-minute delay, meaning I got to Chris at 4.20. He was there waiting for me and we had a reasonable journey up. The M1 is usually a disaster zone but today the delay was only 20 minutes through the roadworks - of course, as per usual, no one was working on them. We got to our pre-match stop of The Dandy Cock micro pub at 6.30 where I had a Thirsty Farmer dry. This was a pretty light one, but it helped me chill. Then it was next door to Mr Chan's Chinese where Chris and I had Singapore Vermicelli and Chicken Satay Skewers. It was a mixed bag. The Vermicelli was great, although the Chicken Satay Skewers were poor with battered chicken and separate sauce. We had our dinner and made our way to the ground, getting there at 7.25. 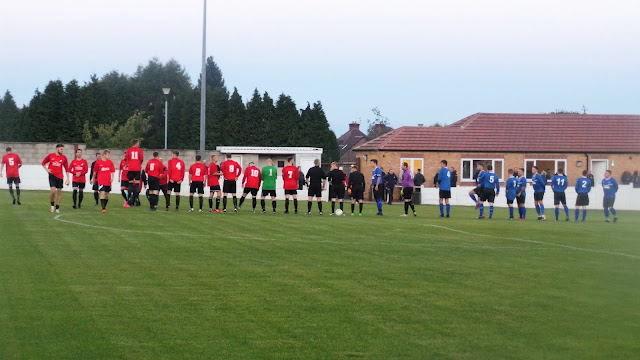 Mansfield Hosiery Mills were having a poor start to the season, sitting 15th and having won just one of five games so far this season. This had come against Radford Reserves (4-1) but they'd lost the other four against Wollaton Reserves (4-5), Burton Joyce (0-3), Awsworth Villa Reserves (2-3) and Southwell City Reserves (1-3). Visitors Kirton Brickworks, by contrast, had enjoyed a good start and were sitting 6th. They'd had wins over Awsworth Villa Reserves (3-2), Wollaton Reserves (3-1) & Southwell City Reserves (1-0). The only blot on the landscape came in the latest game at home to Beeston, where they'd suffered a 2-0 defeat. It was good to see League secretary and charity fundraiser Rob Hornby at the game and we all had a nice chat with some other hoppers. The game was very open with Kirton hitting the post with a header in the opening few minutes. They took the lead 11 minutes in when Kyle Clarkson lifted a shot over Mansfield keeper Matt New from 10 yards out. A few minutes later the lead was doubled when a foul just inside the area resulted in a penalty. Jon Rowley converted successfully, hitting it fairly central past the home keeper. The second half had fewer chances with Mansfield Hosiery Mills coming close to reducing the arrears just before the hour with a long-range shot that hit the bar.


There were a few other chances for both sides but there were no further goals. It had been a decent evening in good company, but it was time to go home. We left at 9.40 and true to form, the M1 was a pain in the neck. Several stretches were down to one lane and this resulted in delays thanks to drivers waiting until the last minute to merge in. All in all, there must have been 20 minutes delay meaning I dropped Chris off at 11,40. The Two Mikes had made the journey go reasonably quick, thanks to their show on TalkSPORT and by 12.30 I was back home. I stayed up for a while having a few drinks and catching up on my blog before going to sleep at around 2 am.

Click this link to read Rob Hornby's report of the game. 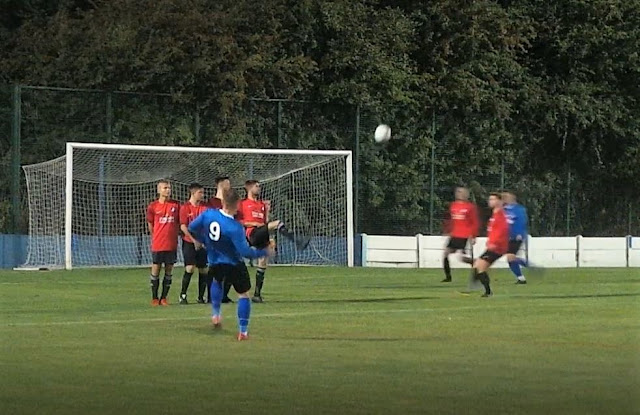 THE FIELDINGS is a smart ground which has a pretty tight and enclosed feel. The sole covered area is a stand holding around 200. Overall, I'd guess the capacity at 1,500. There's a tea bar at the ground, this sells hot food, tea, coffee, cold drinks and snacks. There's also a clubhouse outside the ground and plenty within walking distance of the ground in terms of takeaways and pubs. 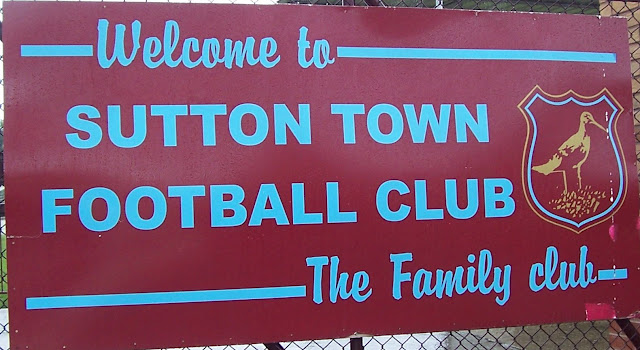 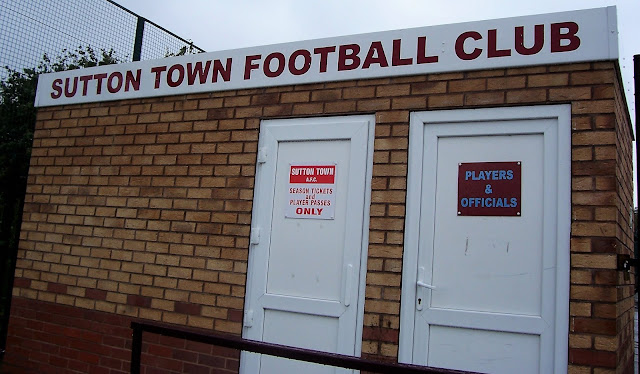 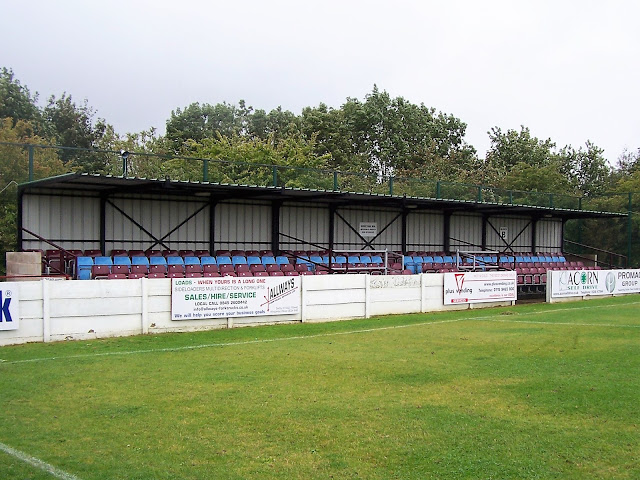 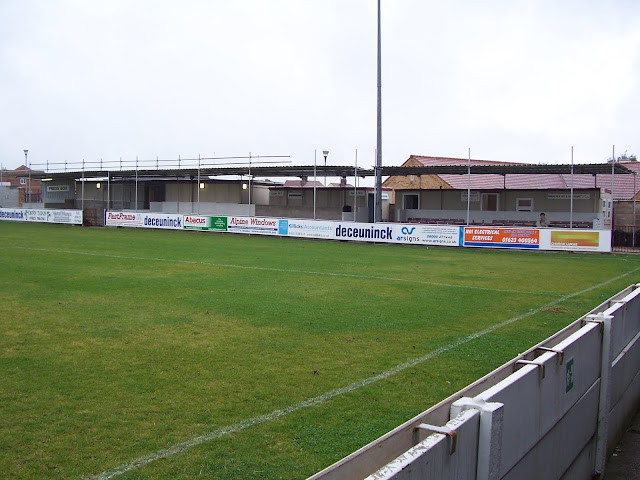 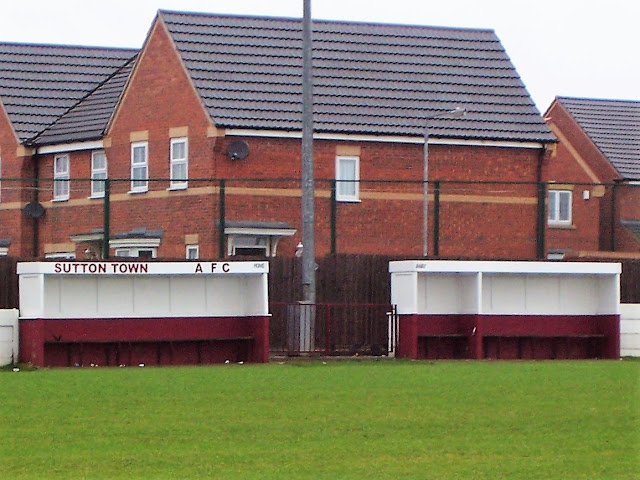 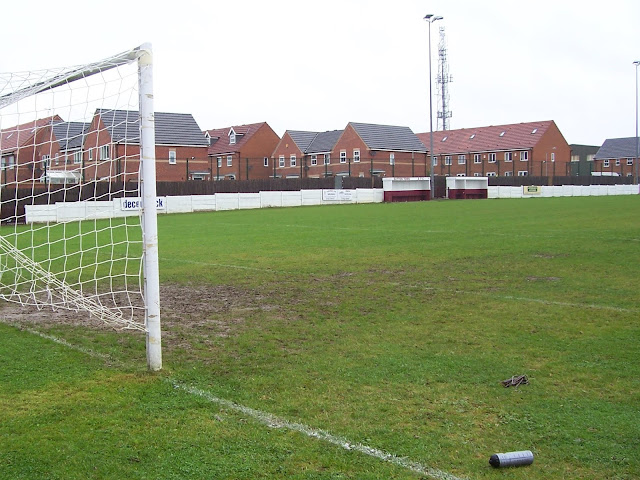 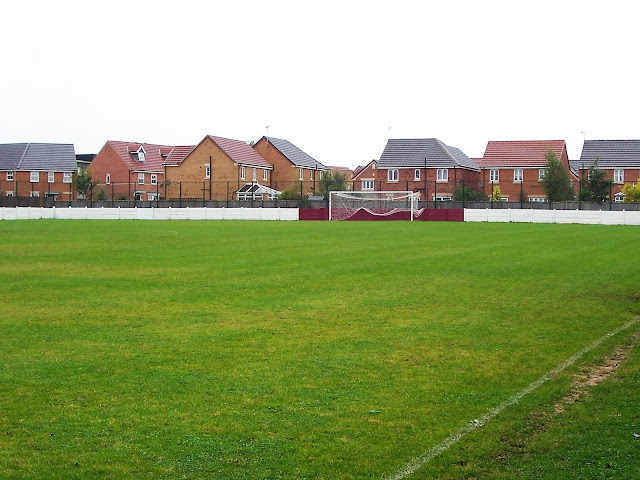 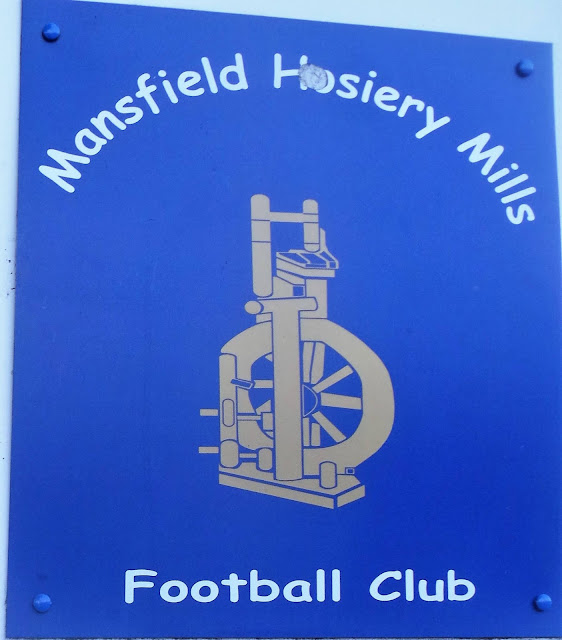 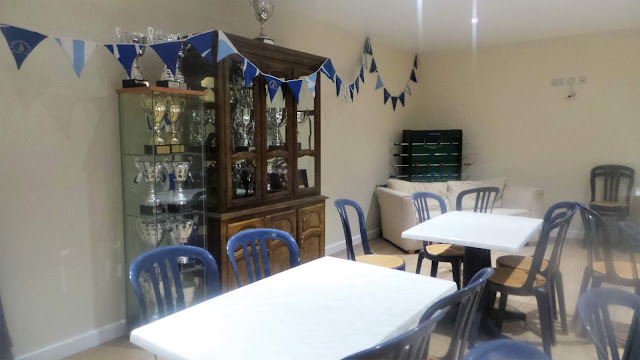 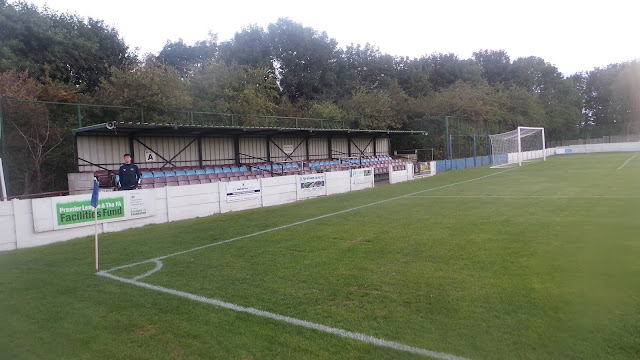 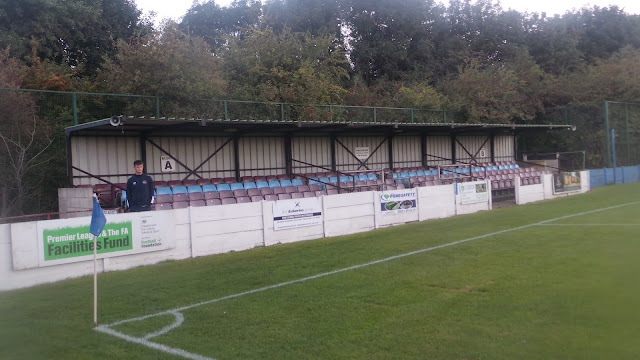 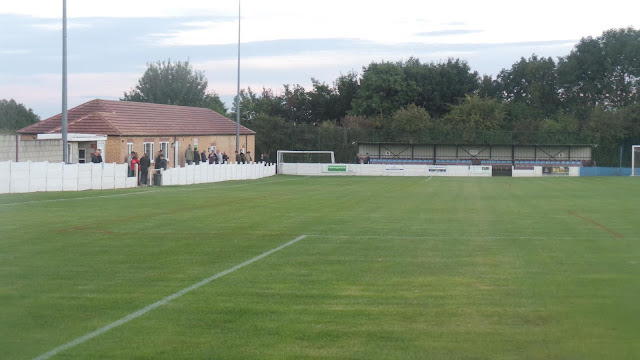 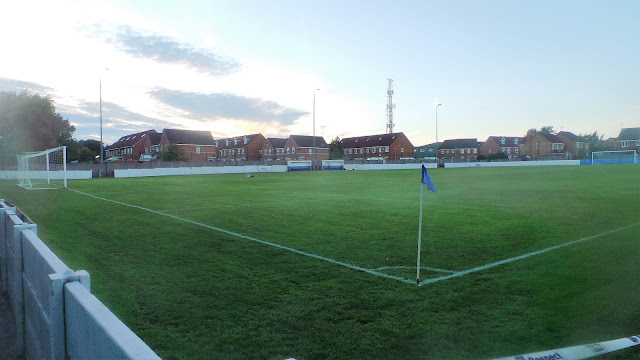 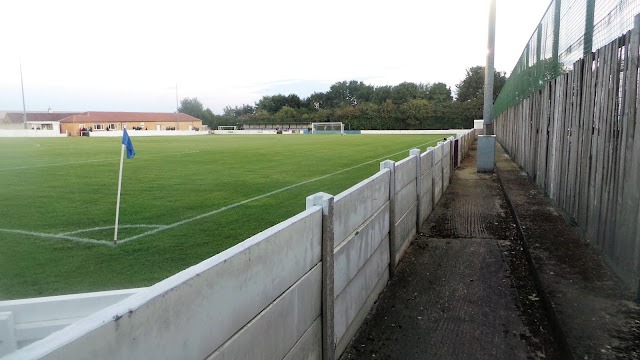