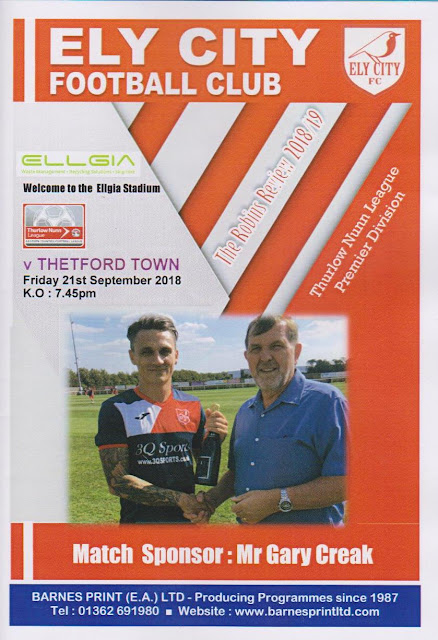 The club was established in 1885, making them the oldest senior club in Cambridgeshire. Early days were spent in the Cambridgeshire League before moving to the Peterborough & District League in 1951. In 1960 they made the step up to the Eastern Counties League. Whilst it was a single division finishes ranged from 4th in 1981 to bottom in 1988. The following year the league expanded to two tiers and Ely City were placed in the Premier Division. The poor form continued and the club was relegated to Division 1 after finishing second-bottom. They'd remain in the lower tier until 1997 when they went back up as league winners. The following season the club enjoyed its record league placing as they finished as runners-up to Wroxham in the Premier Division, just two points short of the title. Despite this, they finished bottom in 1999 and were relegated back to Division 1. The years since have seen them alternate between the divisions on a regular basis, finishing as low as 10th in Division 1 in 2004. The 2011/12 season saw them again finish as runners-up to Wroxham in the Premier Divison. They have been continuous members of the Premier Division since 2016 and prior to my visit sit 6th in the table.

In the FA Cup, the best progress has been to the 1st Round in 1956. That year they beat Histon, Cambridge United, Cambridge City, March Town United & Sudbury Town before a 6-2 home defeat to Torquay United in front of a crowd of 4,223. In the FA Vase, Ely City reached the 5th Round in2017, beating Kirkley & Pakefiled, Diss Town, Northampton ON Chenecks, Wadham Lodge, Welwyn Garden City and Shepshed Dynamo before a 3-0 home defeat to Sporting Khalsa. Local cup wins include the Cambridgeshire Invitation Cup on four occasions and the Cambridgeshire Senior Cup in 1948. The city of Ely has a population of just over 20,000 and famous people from the town include rugby's Clive Woodward. 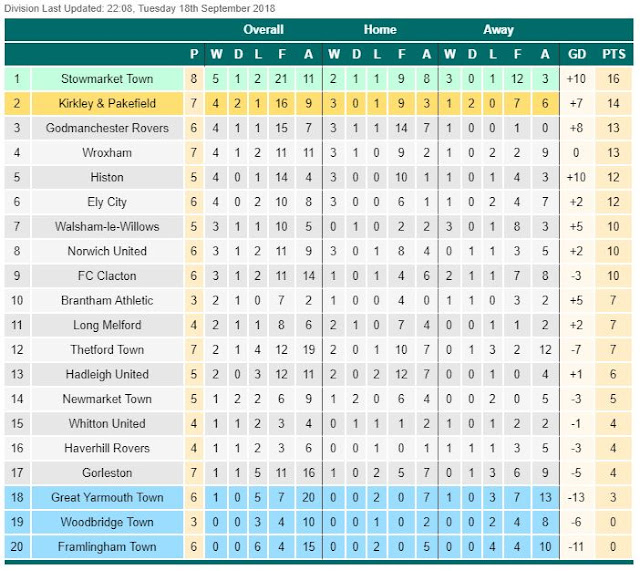 I always like to do a game on Friday night and my week off was no exception. There were a number of options, but Ely City won out by virtue of being the closest. I was pleased to have Anwar as company and so the night before started researching the club's history. I'd initially hoped to walk into town to go to a great looking pub called the Drayman's Son but in the end, it was too far of a walk to make it viable. The day of the came and it was my annual visit to the John Radcliffe Hospital in Oxford for my annual heart checkup. As expected, everything was fine and I was back home by midday. I spent the afternoon at home doing not much and was glad when the 4pm leaving time came. I got to Anwar at 4.30, the journey across was the usual barrel of laughs that you'd expect on a Friday night. It took 2 and a half hours to do the 75 miles and we got to our pre-match stop, the New Dragon Inn around 7. I had salt and pepper chips and spring rolls which cost above average at £6. I'd wanted to top in Aylesbury en route.catch up online but there was no signal available at all on 3. At least the portion size was good and the food was tasty. 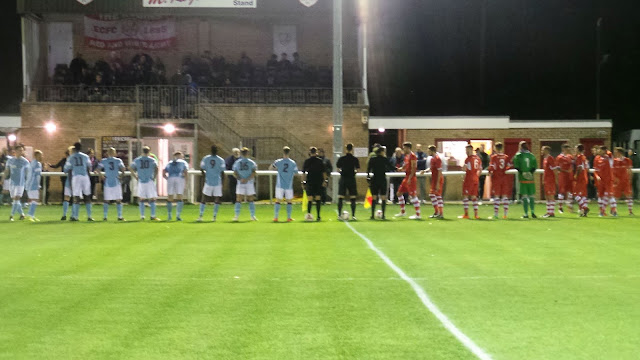 We got at 7.15, paying £7 to get in and £1 for what was a decent programme for the price. It was produced by an outfit called Barnes Print and I've seen them offer programmes free of charge to clubs. So I can only assume that they fund that by selling advertising to meet the costs - therefore a win-win situation for all parties. We watched the game in good company with a Thetford fan called Dave who was pleased that we had made the trek all the way from Buckinghamshire. On the park, it was a very competitive affair, there were chances for both sides but the respective keepers were not really tested. The linesman on our side copped flak from both managers although he took it in good humour and his calls appeared to be correct. Thetford had been by far the better side and they took the lead on 50 minutes when a corner expertly delivered from Ross Bailey was headed in at the back post by towering defender Jon Carver. The lead was doubled on 66 minutes when a great ball over the top was well controlled by the excellent Volta Rocha who blasted the ball into the net from around 15 yards. The same player saw a free kick smack against the post and to be frank, it was only an excellent performance from the Ely City keeper that kept the score down. The hosts did stage a late rally and they scored in the 86th minute when a square ball was put across the box and an inattentive Thetford defence failed to pick up an unmarked man who slotted home from just outside the six-yard box. There were further half chances, but it would have been daylight robbery had they claimed a point. That said, both teams made it an enjoyable contest to watch. 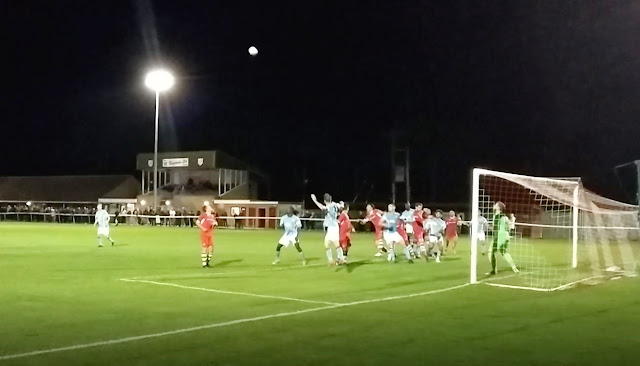 We left the ground at 9.40, with me having one final port of call before we headed home. It was the aforementioned The Drayman's Son. I had a takeout container that I wanted to fill with some cider to take home. While Ely looked a pretty nice place to explore on foot, but by car, it was not as pleasant. Nevertheless, I eventually arrived at the place I was looking for and purchased two pints of Spinney Abbey 'Virgin On The Ridiculous' to take back with me. It was not the cheapest, but being produced nearby, I was never going to be able to pick it up anywhere else.  It was just before 10 by the time came to leave and I wanted to listen to the Two Mikes on TalkSPORT the way home. That was easier said than done though, the MW reception was riddled with interference and the entire city of Ely appeared to be a deadspot for '3' customers. Eventually, I pulled over into a Tescos and got everything set up for the journey home. I was disappointed that an extra 30 miles had been added to the journey, but with the route taking in the M11 and M25, it was more pleasant drive than cramped single carriageways, especially in the dark. The extra mileage was the result of several road closures, and although there were plenty of works, I dropped Anwar off at 11.40. I got home myself shortly after midnight, happy to enjoy my earlier purchase which was excellent. I didn't want to stay up too late though and so after listening to the remainder of the Two Mikes was in bed by 2 am. 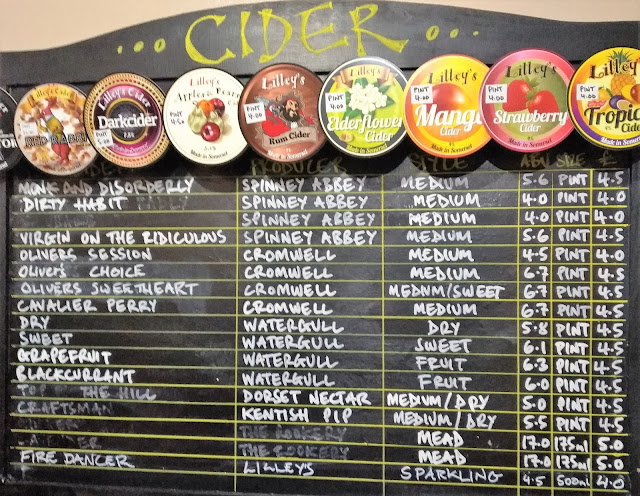 THE UNWIN GROUND is a tidy setup and a decent one for step 5. Pride of place goes to the elevated 150 capacity seated stand. This offers good views and is also pleasing on the eye and unique. There are further covered areas offering both seats and standing, but these are all located on one side of the ground with the rest of it open. The ground is set in a pretty pleasant location, though all that#s really near it is a retail park which offers a few chains like Pizza Hut and McDonalds. The city is around half an hour walk and is a nice looking place with a good range of outlets. Back at the ground, the tea bar and clubhouse are pretty decent and well-priced. 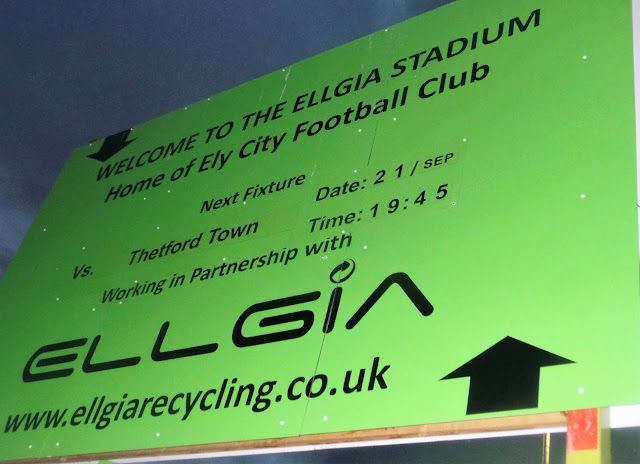 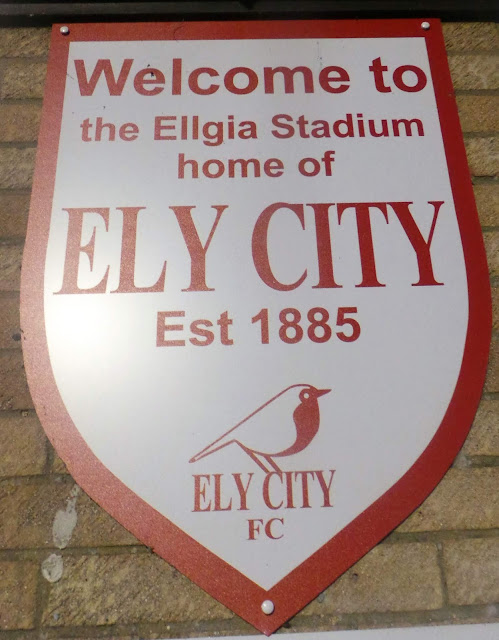 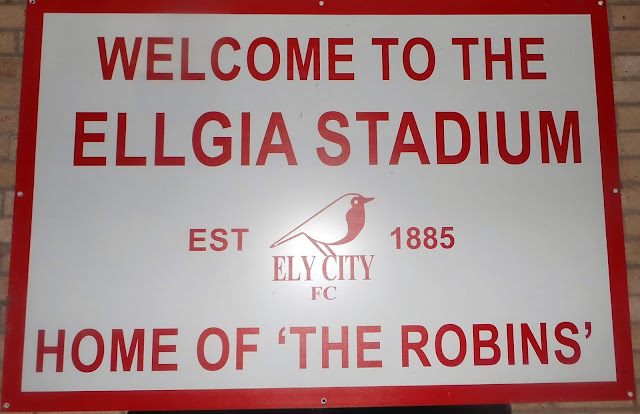 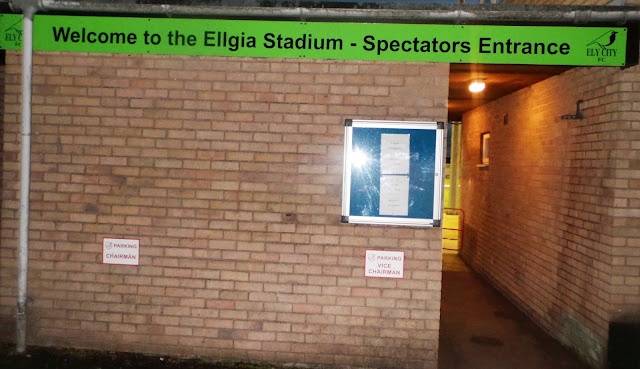 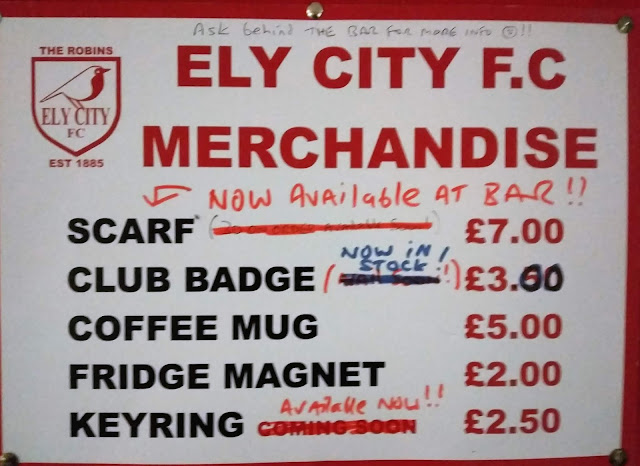 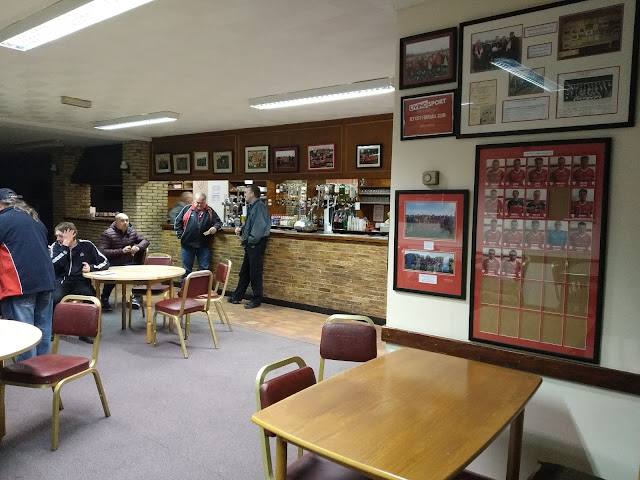 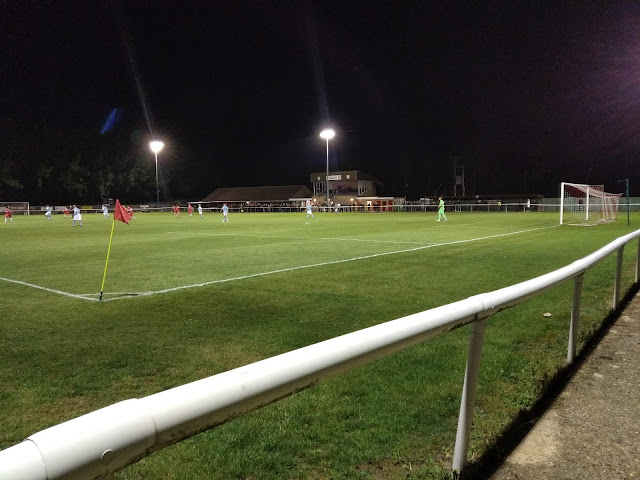 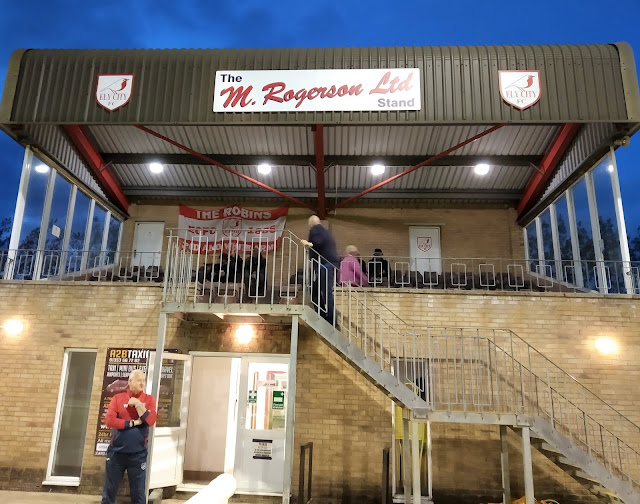 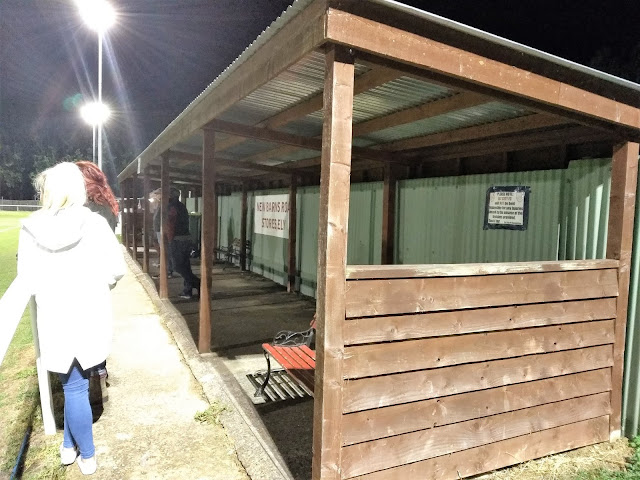 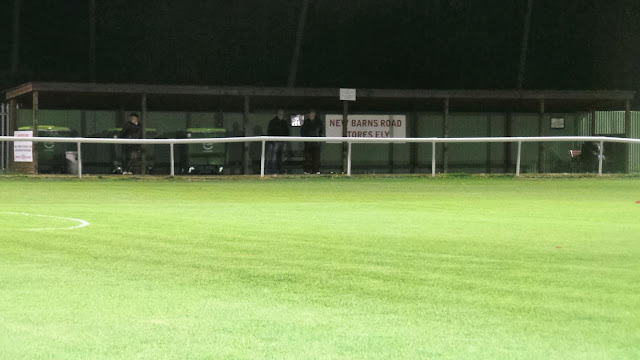 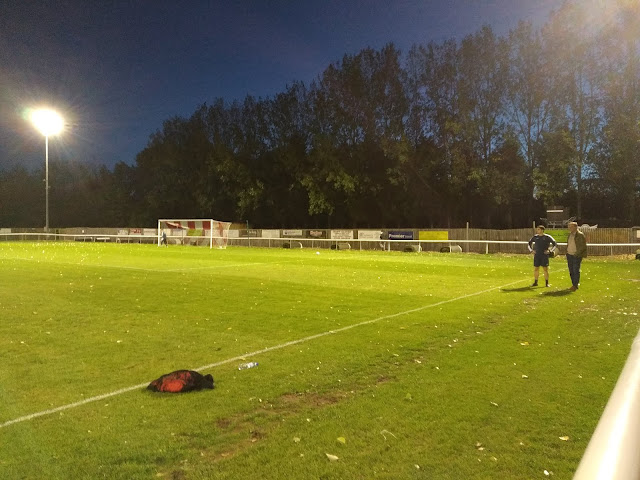 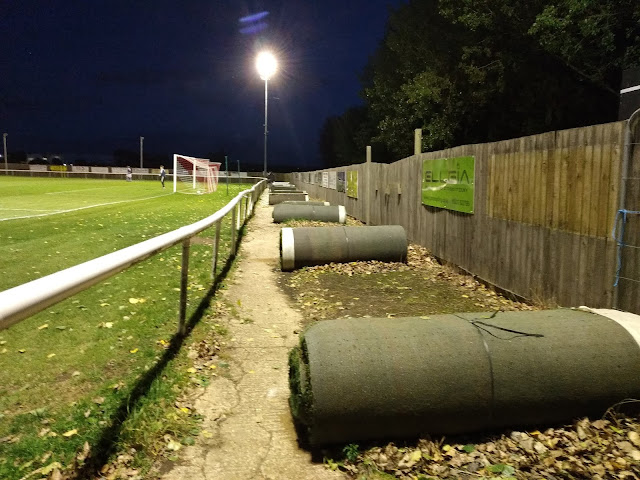 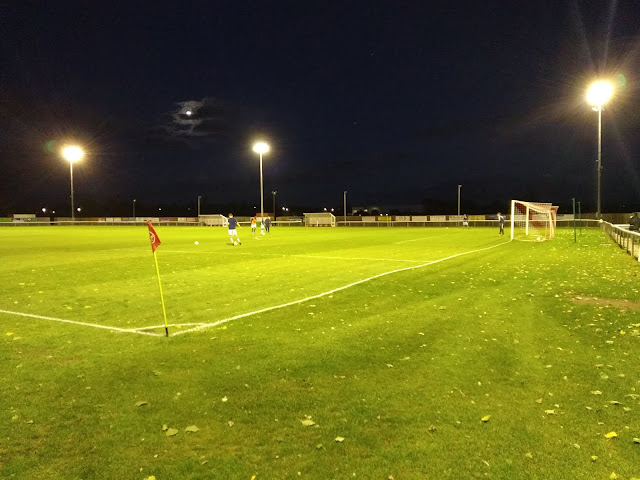