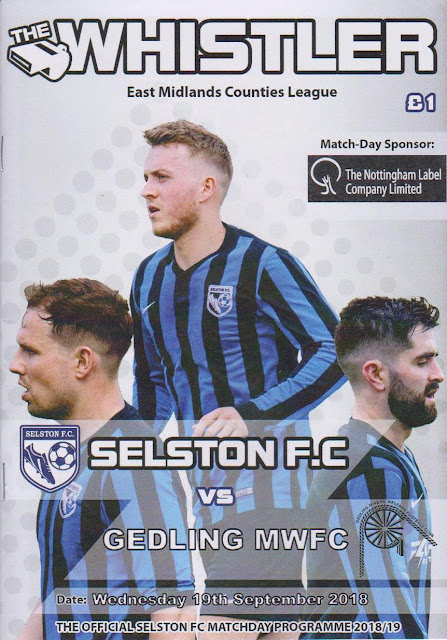 Selston FC was established in 1968 as a Sunday league team and it wasn't until 1986 that they made the move to Saturday game. They started at a decent level, joining the Central Midlands League that year. Their first spell in this league produced a series of mid-table finishes, though regular reorganisation meant that they moved division on a regular basis. In 1992 they switched to the Midlands Regional Alliance, remaining there until 1997 when they rejoined the CML. Their second spell provided mixed results - after earning promotion from the Premier Division in 1999 they would go on to spend three seasons in the higher-tier Supreme Division, two 9th place finishes was an encouraging start but in 2002 they finished bottom of the league and returned to the lower tier. The team continued to struggle and in 2004 they disbanded the first team for a couple of seasons to focus on their youth setup. They rejoined the MRA in 2006, winning the title in 2008 and moved to the Notts Senior League where they were champions in 2014. This signalled a period of great success and in 2015 they rejoined the CML. They were champions of the now-regionalised South Division twice in a row and in 2017 they were promoted to the step 6 East Midlands Counties League. Last season saw an excellent debut season with a 4th place finish and that is where they sat in the league before my visit.

This season saw their second game in the FA Vase and first since 2000 when they lost to Ludlow Town. They've already bettered their progress, winning 3-1 at Radford in the 1st Qualifying Round before winning 3-1 at South Normanton Athletic in the 2nd Qualifying Round. They now face another trip, this time to Eastwood Community in Round 1. The village of Selston has a population of 12,596 according to the 2011 census, though this includes nearby Bagthorpe. 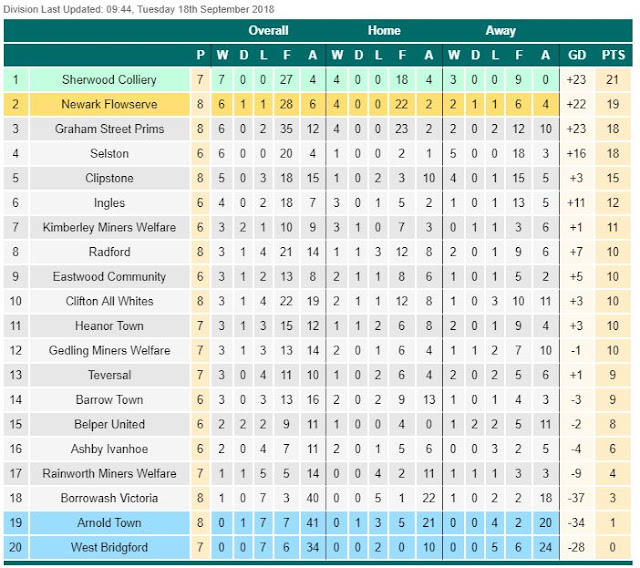 Initially, on my week off, I'd been hoping to do a lot more games with Milton Keynes based hopper Chris. Usually, my early morning starts and his unavailability on Tuesdays and Saturdays severely limit our trips. Though signs had initially looked promising, thanks to his work commitments, he was only able to make the Wednesday. Annoyingly, there was a real lack of options with only a handful of games available. After discussing the options, we eventually settled on Selston v Gedling Miners Welfare although I'd have probably preferred the Bottesford Town v Pinxton FA Vase replay. As usual, I did my research on places to eat for dinner and found a decent looking Indian restaurant a few miles away in Alfreton. 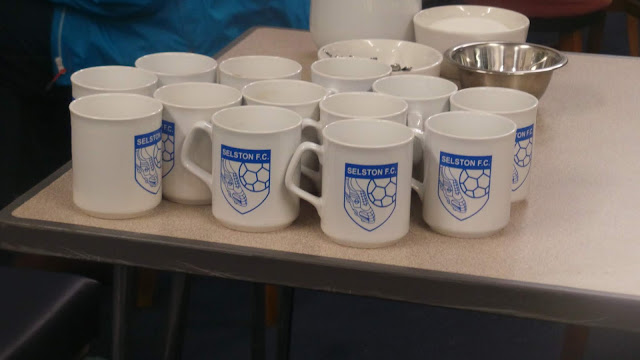 The day of the game came and I spent my morning at home researching future blogs. After lunch, I left home at 2.10 as I wanted to stop in Aylesbury en route. B&M Bargains had the few bits that I needed, including some drinks for the night's game. I made good progress from there, arriving to meet Chris half an hour ahead of our planned 4PM meet time. It turned out o be a blessing in disguise as the journey was up to the M1's usual abysmal standards. There was a delay as soon as we got on but we eventually got going. The worst of the delay was saved for the junction with the M6 where a minor prang with a Volvo going into the back of a lorry resulting in two lanes being closed. A 'report of obstruction' proved to be a hoax near Leicester which resulted in more time being added to the journey before the usual slowdown in the roadworks. All this resulted in over an hours delay with us getting to Alfreton at 6.10. I parked in Tesco and we nipped to the local Wetherspoons, The Wagon & Horses for a swift pint. This was one of the better establishments in the chain and I was pleased that they had one of my favourites, Black Dragon cider available. Chris and I both had a pint of this before making our way across the road to an Indian restaurant called Sanan. There we both had Karahi Chilli Chicken with Pilau rice and I had some orange juice to wash it down. The food was excellent, though there was a bit of a wait for it to come and so we didn't get out until 7.20.

It was then a 6-mile drive to Selston, with us getting there at 7.35. Entry was a fiver and a thin but reasonably decent programme was a quid. I briefly got some pictures of the ground before settling on a spot on the halfway line between the dugouts. It was a physical first half, but even so, I felt the referee was a bit whistle-happy which resulted in the game being broken up a lot. Both benches had plenty to say for themselves but in the second half, the referee let the game flow a little more. The only goal of the game came on 54 minutes when a foul just inside the area resulted in a fairly soft penalty being awarded. It mattered not to Carl Moore who stepped up and slotted past Gedling keeper Danny Brown.  There was an 83rd-minute red card for Selston's Rhys Dolan. It was a tackle in the middle of the park and he got some of the ball but the referee called it right according to the rules as it was a tad high. The hosts survived a late scare as a Gedling goal was ruled out for offside. The visitors probably deserved a share of the spoils but the Selston home win sent the vast majority of the 153 crowd home happy and sent them second with 7 wins out of 7. It had been a better game than the 1-0 scoreline would suggest and I headed home in a decent mood.


We left the ground at 9.45 and I wasn't anticipating any problems. We made a good start and was making good progress until we hit a road closure on the M1. The diversion took us off at Northampton and sent us down a ridiculous back route. The tiny road was unable to cope with the volume of traffic and so a 45-minute delay ensued, the worst of it coming thanks to a 2-mile queue at a roundabout. After stopping for fuel, I dropped Chris off around midnight. It was then a dash for home and although there were plenty of stretches of road having works done, the delays were only around 5 minutes. I got in at 1 am and was pleased to be able to see my parents before they headed off on holiday, something that I was fearing that I'd not be able to do. I stayed up for a bit after that, catching up on my YouTube subscriptions whilst I typed my blog.


PARISH HALL is a venue shared with the local cricket club and as a result, only two sides are available to spectators. These two sides are pretty hemmed in and they contain two stands, one for standing and one for sitting. They'd keep a couple of hundred fans dry and refreshingly they are solid structures rather than the usual metal stands. The pitch had a distinct slope to it and this added to the charm. The clubhouse is set way back and this sells pies, rolls, hot drinks, soft drinks and cans of beer and cider. The village has a few places to eat and drink and the main centre is around half a mile away. 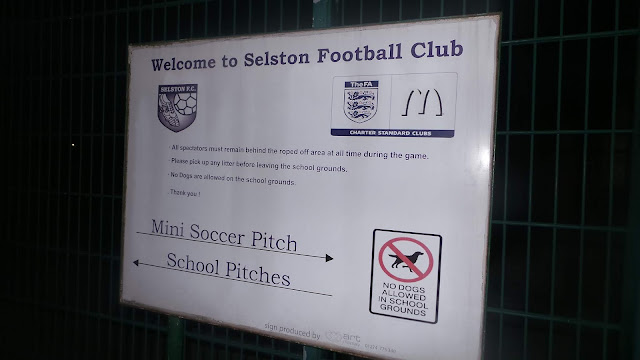 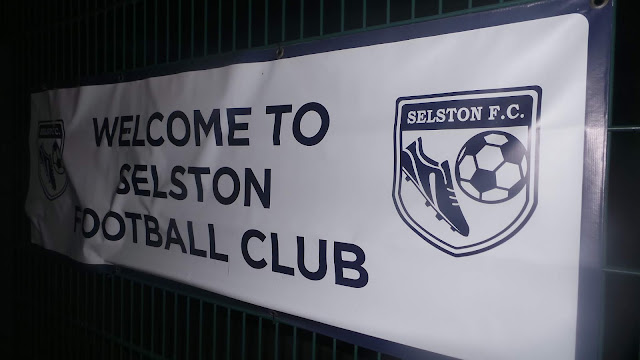 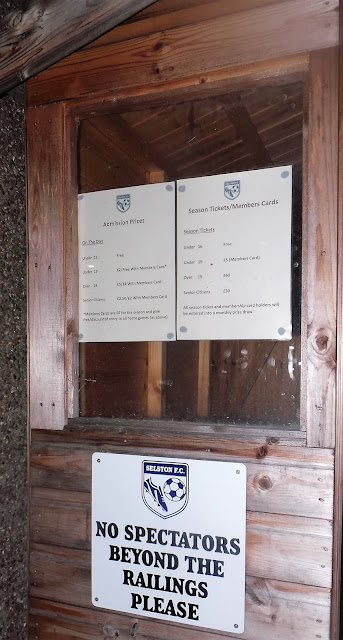 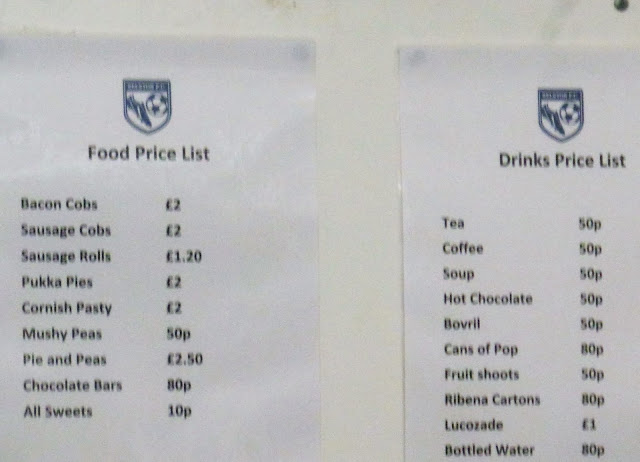 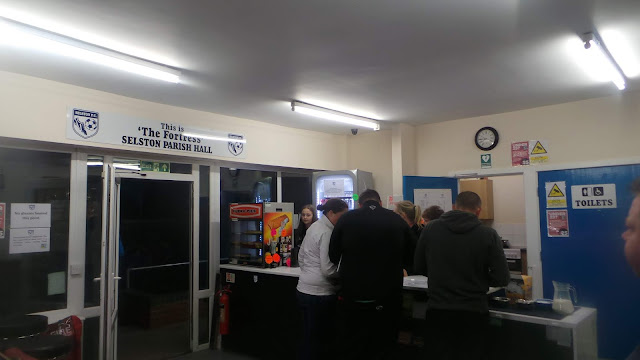 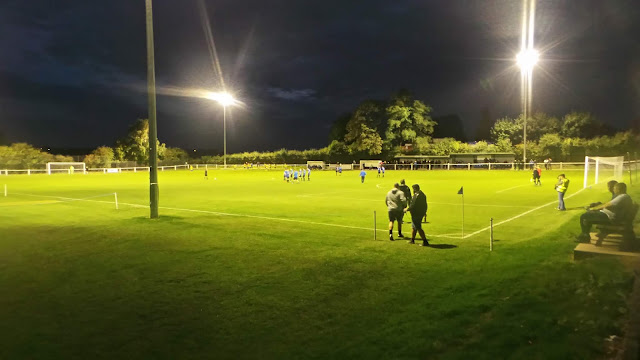 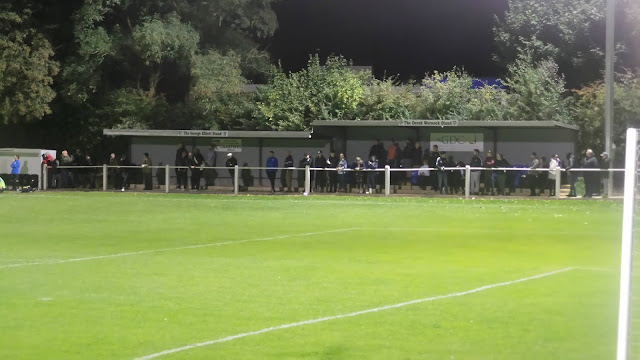 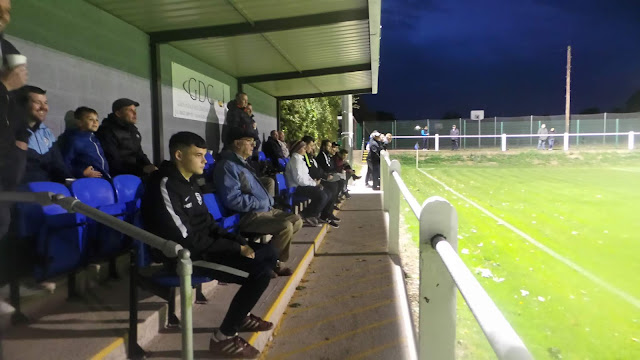 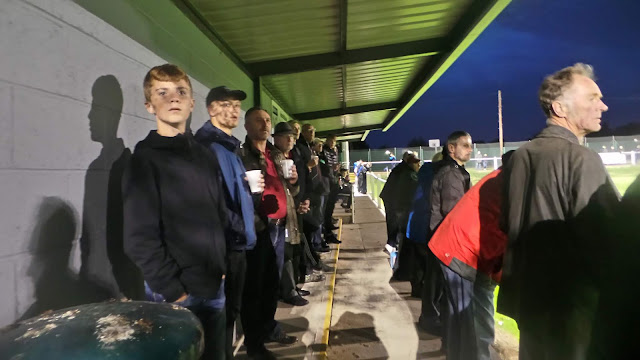 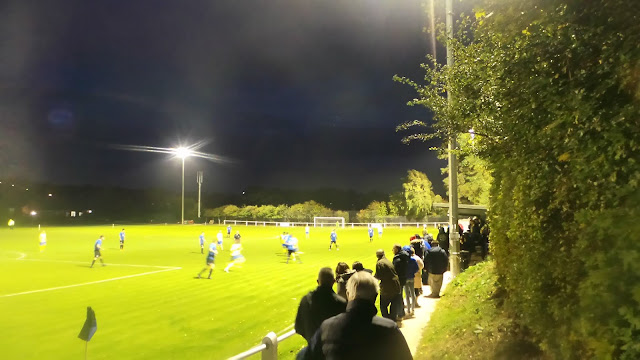 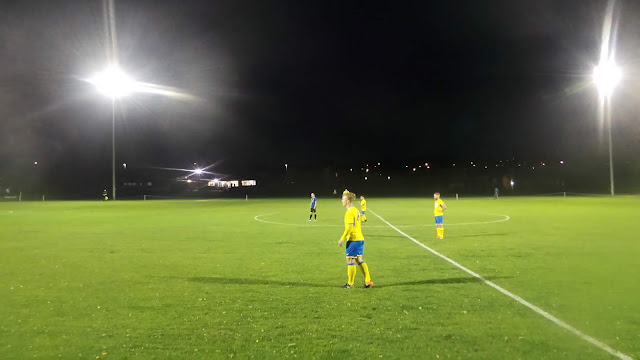 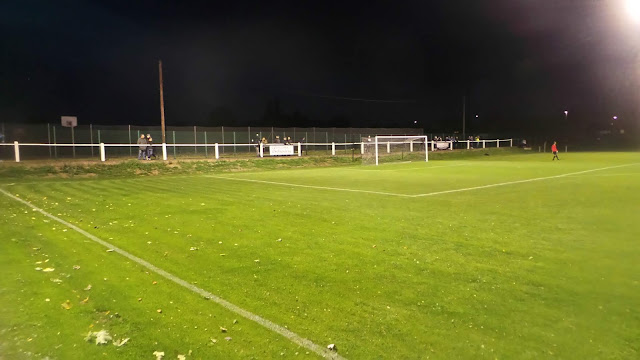 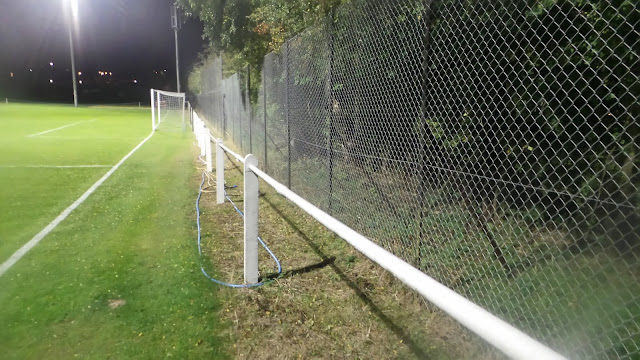 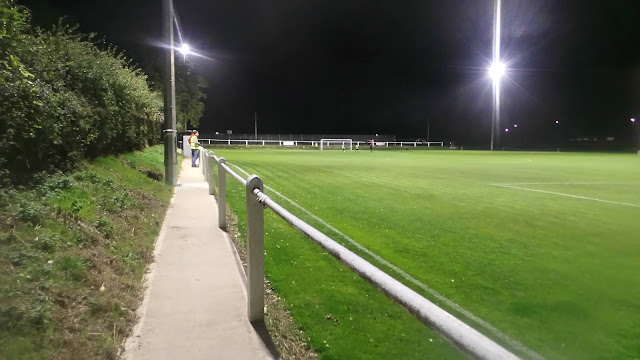 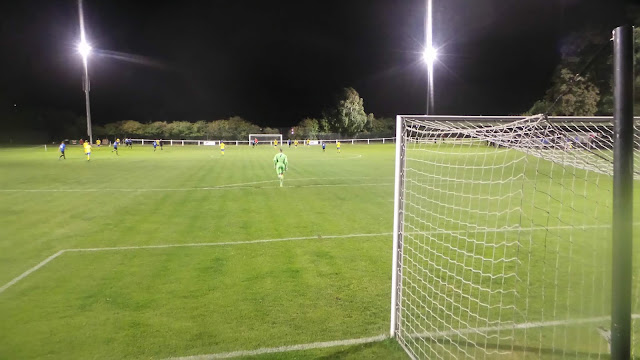