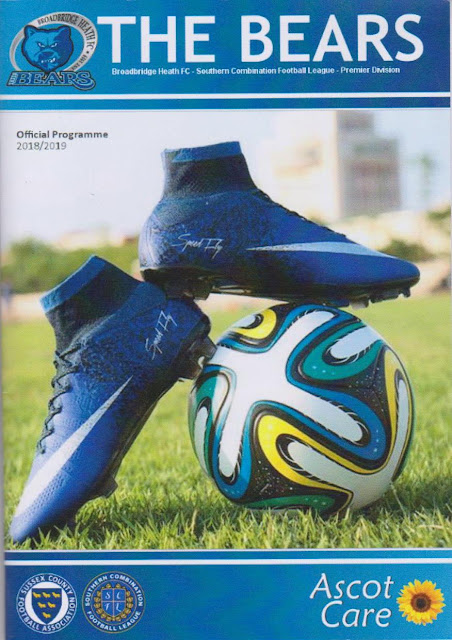 The club was established in 1919 by demobilised soldiers from the First World War. They joined the Horsham & District League upon formation, winning the league and the league cup in their first season. The club would remain here for some time, right up until 1970 when the competition was absorbed into the West Sussex League. Starting in Division 3, Broadbridge Heath won promotion in their second season as well as winning the Charity Cup the season before. They won another promotion to Division 1 in 1976 but two years later left to join the Southern Counties Combination League. In 1983 this was merged into the Sussex County League. Broadbridge Heath started out in Division 3 and remained there until 1988 when a third-place finish behind Ifield and Midway was good enough for promotion. Despite struggling for a lot of their first spell in Division 2, they won promotion after a 3rd place finish behind East Preston & Eastbourne United in 1998. They'd only last the one season in Division 1 with the team winning just 4 games all season and finishing rock-bottom. Aside from a couple of good seasons, Broadbridge Heath continued to struggle and would be relegated back to Division 3 in 2008. a 5th place finish in 2012 was deemed good enough for promotion back to Division 2. This time they would fare a lot better in Division 2 and in 2014 would finish as runners-up to Eastbourne United to seal promotion to the top tier. The club has remained there ever since, though the league has been renamed the Southern Combination. In 2016-17 Broadbridge Heath enjoyed their best ever finish in their history as they finished 8th. They are currently enjoying a good start to the season and stand a good chance of bettering that position if they carry on as they are.

Broadbridge Heath have a very poor record in the FA Cup having lost all three games that they have played in the competition so far. Their record in the FA Vase is not much better though in 2017-8, they did reach the 2nd Round. After beating Southwick, AFC Croydon Athletic and Kensington Borough they travelled to the eventual winners Thatcham Town and found themselves on the end of an 8-2 defeat. The village of Broadbridge Heath has a population of just over 3,000 according to the latest census and is a couple of miles away from the town of Horsham who would provide the opposition for my visit. The club are due to move next door to a new ground soon, having played at their current venue that is a multipurpose facility since 1987. Prior to that, they played at a more basic facility that is now the site of a Tesco supermarket. 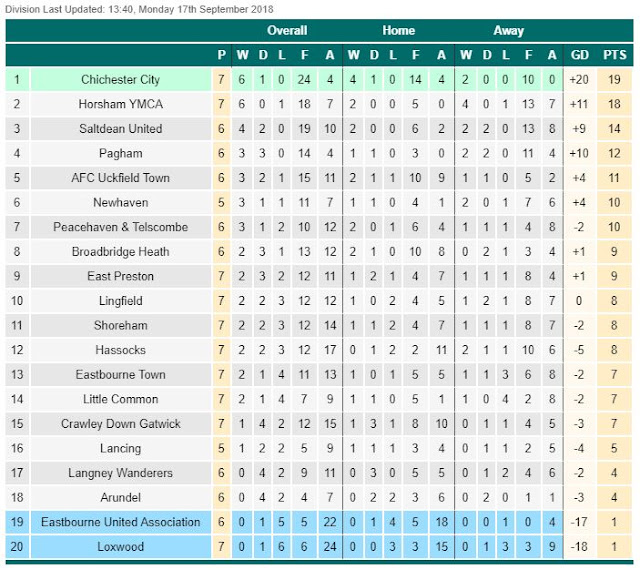 For the first day of my half-week off, I knew that I'd be on my own. Neither of the hoppers that I regularly go with were available. As usual in this situation, I'd be trying to keep the miles down, or indeed head south. With the lack of local grounds that I have yet to do, it was inevitable that it would be the latter. There was around 15 options in all, all involving clubs from the Southern Combination and Wessex Leagues. I'd been hoping to do an FA Vase replay, but there were none available at 'new' grounds. It would be another cup, The Sussex Royal Ulster Rifles Cup that would provide me with a game. Broadbridge Heath v Horsham YMCA had three things going for it - it was my nearest unvisited ground, it was a local derby and the club was due to leave the ground soon, albeit only to next door. It was to be the first game of a busy week for me and so I had quite a lot of research to do for this blog. 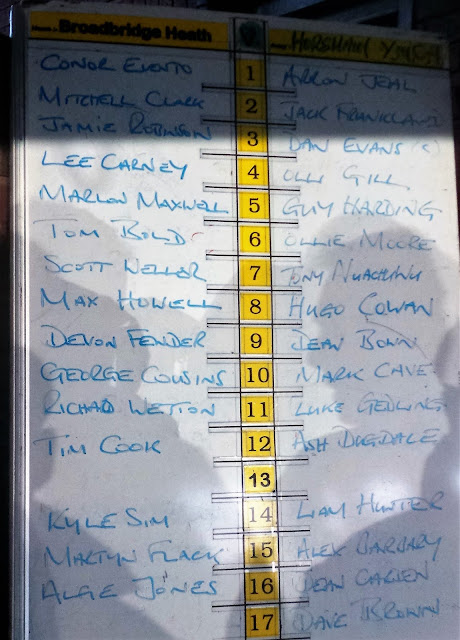 On the day of the game, I'd had a reasonable night's sleep and did my usual walk down town before getting a lift back with my Dad. After a nice Mexican for lunch, I spent the afternoon watching TV and catching up with various things. Earlier, I'd noticed that Dorking had free entry for their friendly against Dulwich Hamlet but I decided to stick with my original plan despite Dorking being nearer. After having dinner, I left at 5.25, hoping for a decent journey. It turned out to be the case, having only 15 minutes delay overall. I listened to the Alex Ferguson Sporting Life CD that I'd picked up from a local charity shop earlier that day and it was well worth the 50p outlay. I got to the ground about 50 minutes before kick off. I noted the 3-hour restriction in the Tesco car park and so headed through to the Leisure Centre car park just in case there was any extra time. I paid £6 for entry and £1 for a reasonable programme before walking round to get some pictures of the ground. After that, I went inside to type some of my blog on my tablet, but I'd not used it for ages so the battery was dead. I got by with my phone, catching up on Twitter before going outside just before kick off. I opted to stand on the grass bank on the opposite side of the ground as it was a lot closer to the action than the main stand.

The first real chance came on 15 minutes when a low shot was tipped around the right-hand post by Horsham YMCA keeper Aaron Jeal. From the resulting corner, a cross in, the ball was fed back across the box and Devon Fender bundled the ball home from close range. The visitors had a chance to get level on 23 minutes when the impressive Tony Nwachukwu fired narrowly past the right-hand post from just outside the area. They did get the equaliser on 39 minutes following a spell of pressure. A corner was put in but was only half cleared. The ball fell to Mark Cave who lashed it into the top right-hand corner from just inside the area for a lovely goal. Broadbridge Heath regained the lead with the last kick of the game when Marlon Maxwell slid the ball home at the back post following a quality delivery from a corner. Four minutes into the second half, a great ball from Lee Carney found George Cousins who controlled well before slotting home from 15 yards. The result was sealed on 79 minutes when the ball fell to Richard Wetton on the edge of the area and his tidy finish found the bottom right-hand corner. A disappointing evening for Horsham YMCA was made worse on 84 minutes when Nwachukwu saw red for calling the referee a 'fuc*king idiot'. I've seen referees being called far worse and not even being booked, but if you go by the rulebook, then referee Oliver Westgate made the correct decision.


Broadbridge Heath 2-1 Horsham YMCA at half time. This goal giving the hosts the lead with the first kick of the first half.
A post shared by Russell Cox (@russ_wwfc) on Sep 18, 2018 at 12:37pm PDT


Despite a couple of minor whinges from the home bench, Mr Westgate handled the game well and let it flow. This contributed to an entertaining contest that provided good value for the £6 entry fee. Elsewhere Wycombe gained a 2-1 victory against Fulham U23 in the Checkatrade Trophy, a competition that I continue to boycott, because of the inclusion of 'B' teams. The attendance of just 595 would indicate that most others feel the same. I left at 9.40, trying to listen to the football coverage, though the crackly MW reception made it difficult. Attempts to pull over and listen to it via my phone proved futile as there were plenty of signal dead spots. I was glad for Liverpool, getting a late winner to beat Paris St Germain 3-2. As I got closer to the M25, things improved although by 10.30 there was nothing worth listening to. Instead, I put my Duran Duran Greatest Hits CD on, another 50p Charity Shop bargain. I got home at 10.55 and caught up online before typing my blog. As it was my week off, I had a couple of bottles of cider while I did this and it was nice not to have to worry about not being up for work in the morning. 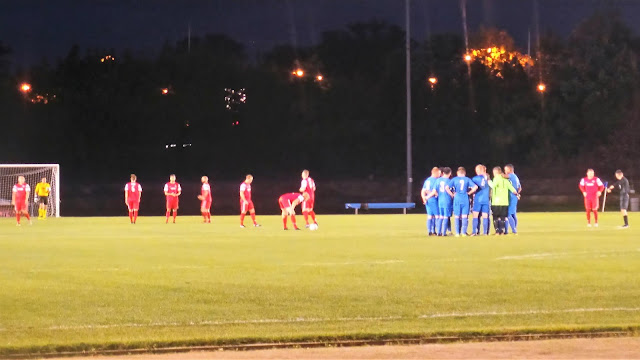 BROADBRIDGE HEATH LEISURE CENTRE is a multi-use venue which frustratingly includes an athletics track. The only area that is covered is the main stand, this stretches the whole side of the pitch and probably contains around 350 seats. It's set a fair way back from the pitch and various athletics paraphernalia gets in your way. The rest of the ground is open with the grass bank on the opposite side providing an acceptable view. There are bar and food facilities at the ground, but these were basic and closed on my visit. The large Tesco opposite is probably your best bet, though be wary of the 3-hour limit if you use the car park. Overall, the club was nice and friendly and I really enjoyed my visit. 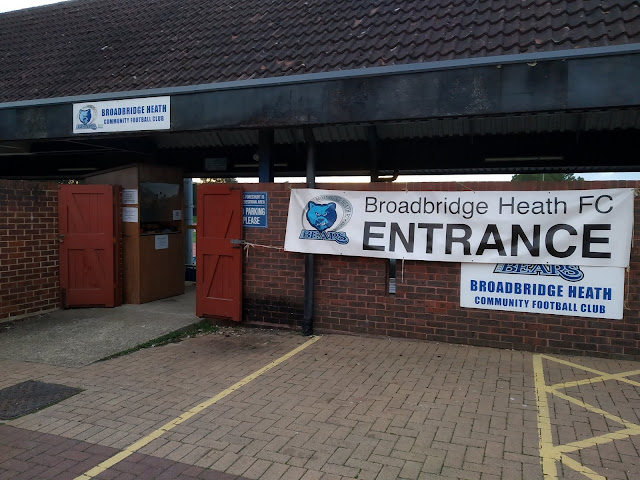 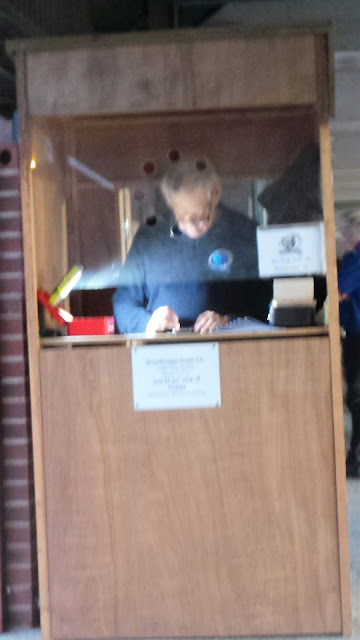 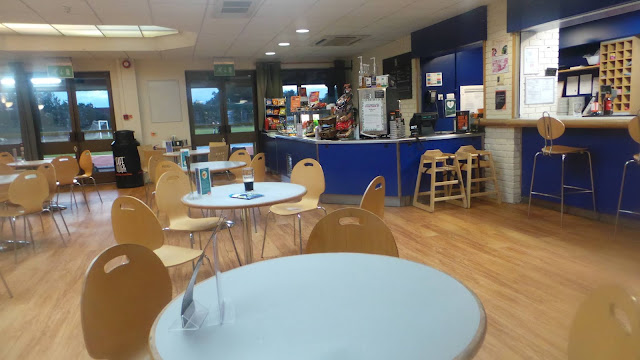 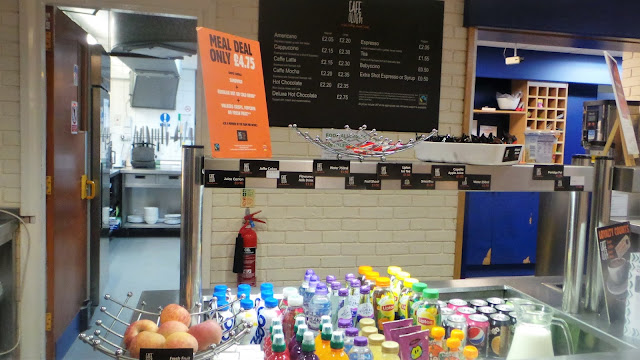 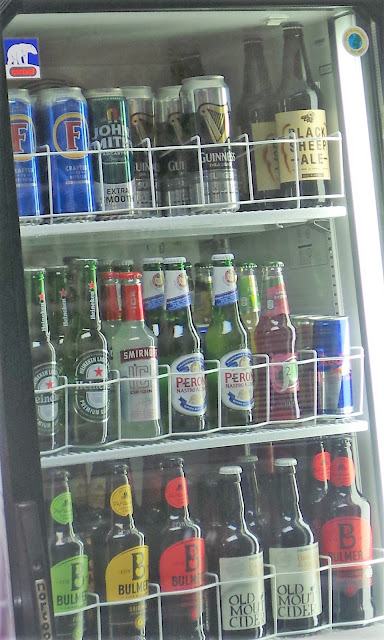 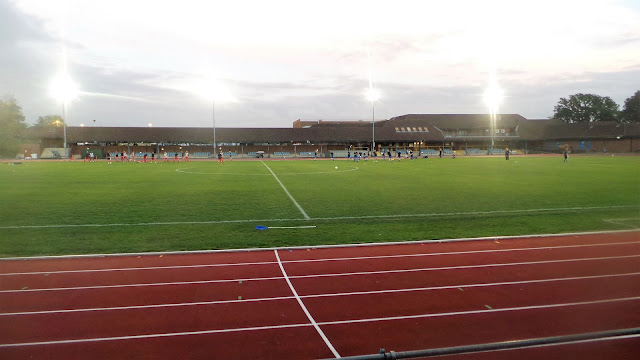 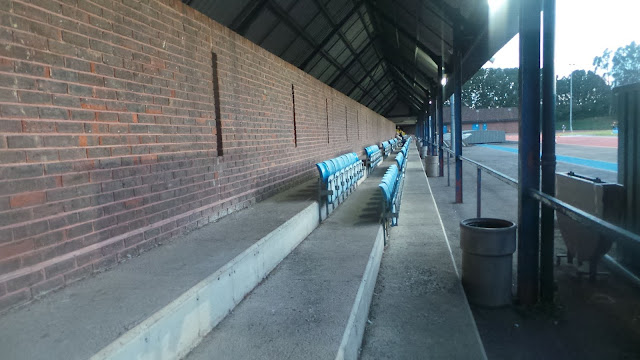 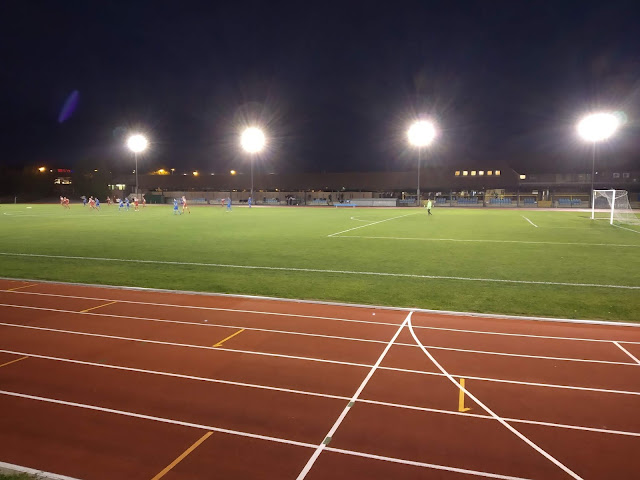 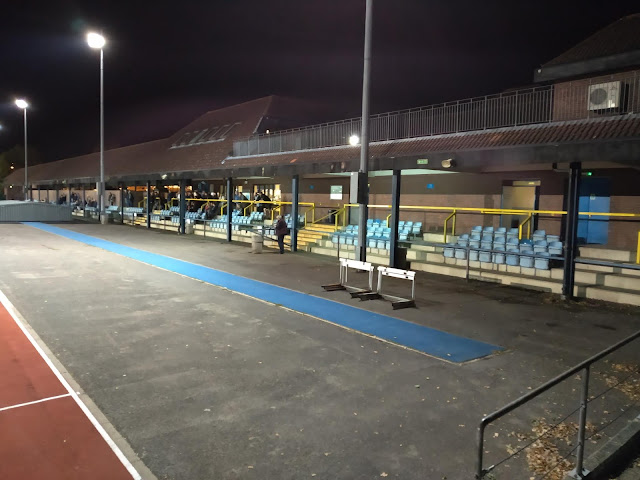 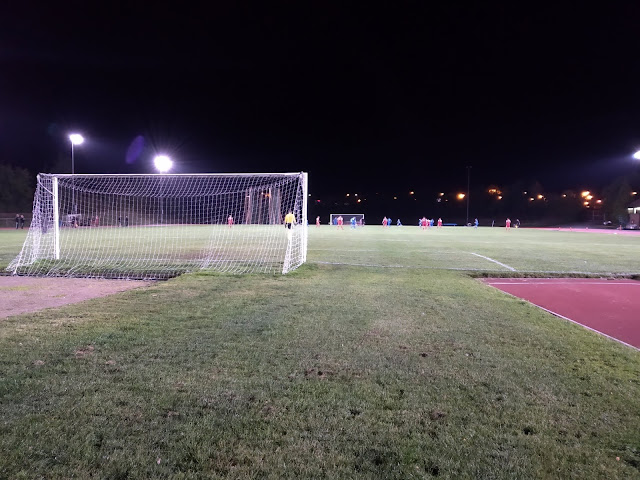 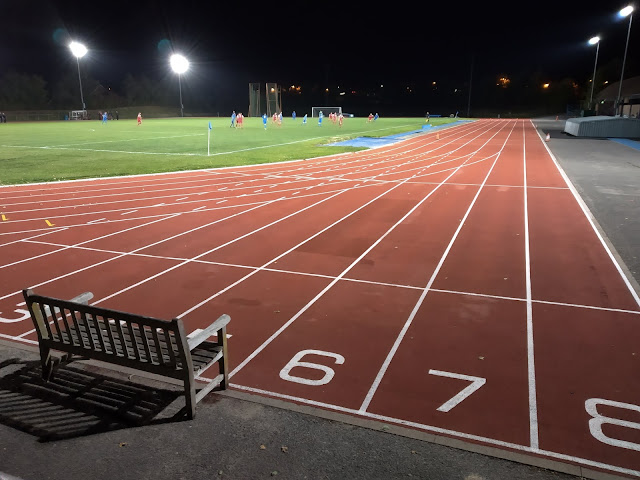 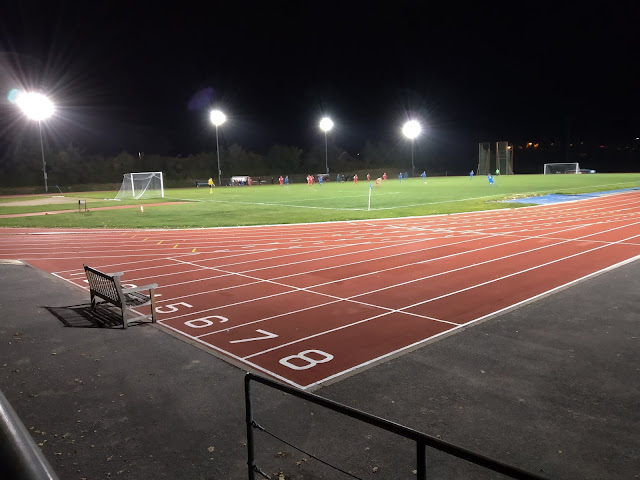 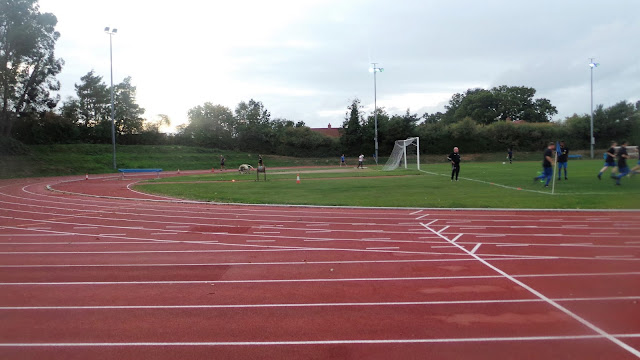 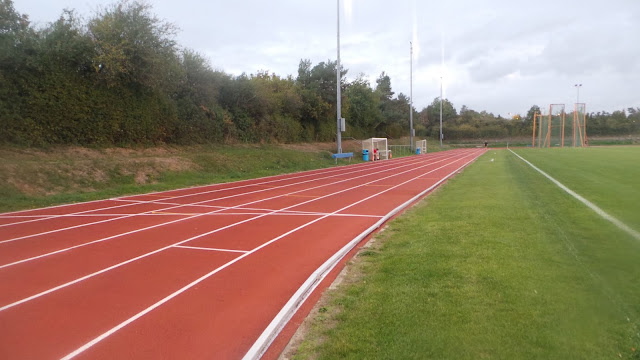 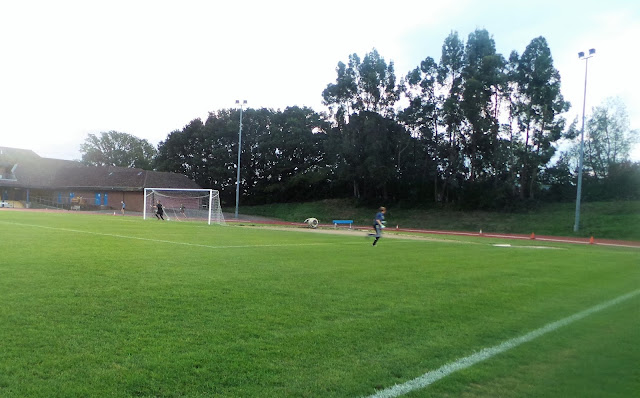