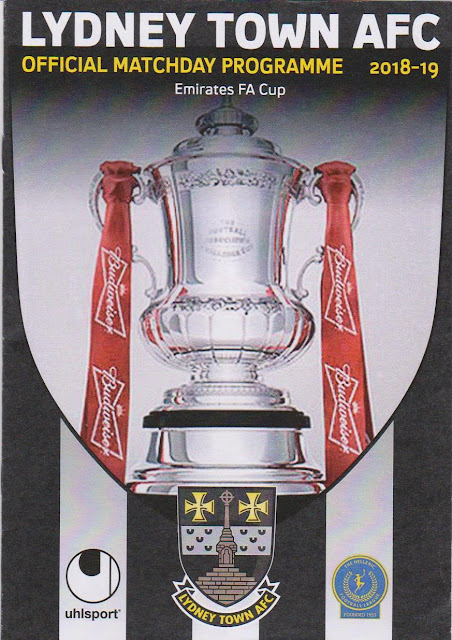 The club was formed in 1911, starting out in local leagues. 1952 saw them join the Gloucestershire Northern Senior League where they were champions in 1980 after finishing as runners-up in the previous two seasons. This led to a four-season spell in the Hellenic League and despite a credible 5th place finish in the first season, the financial strain saw them return to the Gloucestershire Northern Senior League in 1984. They remained at this level for over 20 years until the decision was made to join the Gloucestershire County League. This spearheaded a period of great success, with Lydney Town champions in their first season, resulting in promotion to the Hellenic League. They won Division 1 West in their debut season of 2006/07 and gained promotion to the Hellenic Premier. Despite a 10th place finish in their first season, there were issues with getting floodlights installed and as a result, the club was demoted back to Division 1 West. Lydney Town would stay here until 2015 when they finished 3rd behind Woking & Emmbrook and Brackley Town Saints and were promoted back to the Premier Division. They've remained there ever since with the best finish of 9th coming in 2017.

This current season has represented Lydney Town's best progress in the FA Cup so far. They travelled to AFC Hayes in the Extra Preliminary Round and came away with a 2-1 victory. Next up was another journey, this time to Royal Wootton Bassett Town where the two teams shared a goalless draw. Lydney won the home replay 5-3 to set up another trip, this time to Lymington Town. The two sides drew 2-2 down in Hampshire on Saturday to set up a game that sees the winners face a plum home tie against Torquay United. There has been modest success in the FA Vase, the 1st Round being reached on four occasions. Local cup wins include the Forest Green Supporters Trophy won in 1995 & 1997. 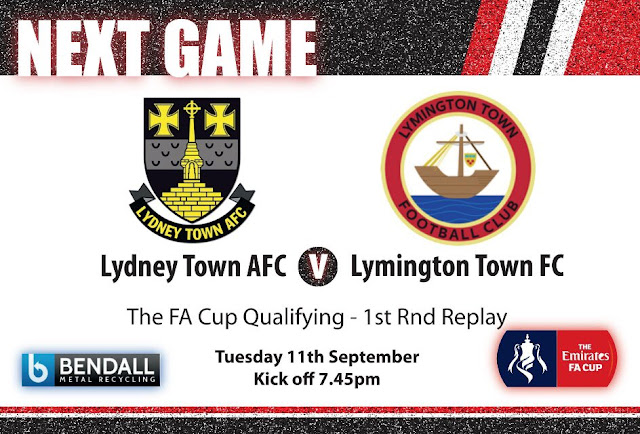 Once again, it was time to hit the FA Cup trail, surprisingly this would be my 6th FA Cup game of the season and the third in little over a week.  The last two had hit me hard in the pocket costing me nearly £90 for the pair, but thankfully I was still keeping within my budget of £20 overall. The quality of the games varied wildly from a thrilling game at Bemerton Heath Harlequins last Tuesday and a dull game at Ramsgate on Saturday. Thankfully, I'd have fellow hopper Anwar back in the passenger seat tonight to keep me company and help out with costs. It was the game that stood out above the other options for me, though I might have been swayed by the dinner choice though. We'd stopped at a place called Muchahos on our way to Longlevens in late June. Here we had both had a really good meal, so much so, that I didn't add it to my football costs for that game. The attractiveness of the game was raised another notch on Monday when the FA Cup 2nd Qualifying Round draw paired the winner with a home game against Torquay United, until recently, a Football League club of many years. It would be a good way to celebrate Anwar and I's 200th groundhop together since we started in September 2012. 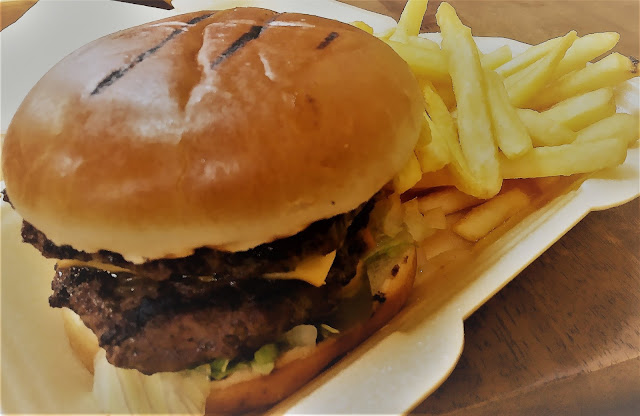 On the day of the game, I'd had a reasonable nights sleep and it was my usual walk down town before meeting my Dad for a lift back. I'd purchased a decent Beef Keema curry lunch from Iceland and I had this before spending the early afternoon starting this blog and making some plans for future games. I left at 3.30, getting to Aylesbury at 4 where Anwar was waiting for me. I was pleased when he said he was unlikely to be going to Portsmouth v Wycombe as it opened up the chance of another hop together. We had a bit of traffic in Oxford and Witney but traffic was a lot clearer than usual. We got to our pre-match food stop in Gloucester at 6 where we both had half pound gourmet burger meal for £7.50. It was all freshly cooked and very nice and filled us up a treat. From there we made the 20-mile journey to Lydney, filling up at a reasonably priced petrol station on the way. We got to the ground at 7.10 and were charged a quid to park in the nearby rugby ground. From there we went in, entry was £6 including a programme. I got some pictures of the ground before finding a spot on halfway to watch the game from. 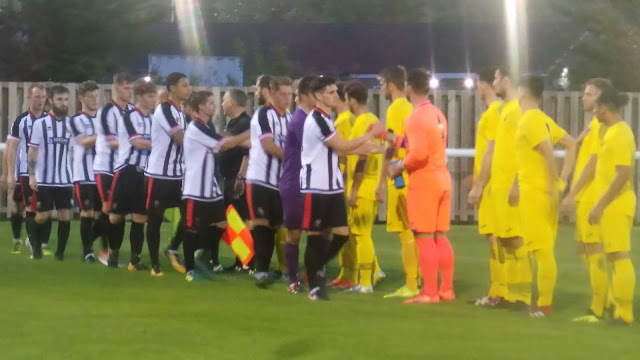 Looking at the league tables, both sides were sitting in mid-table. The hosts were 12th in the Hellenic Premier having played 5, won 2, drawn 1 and lost 1 so far this season. Owing to cup commitments, they'd not played a league game since August 27th when they drew 0-0 at home in the local derby with Tuffley Rovers. As a result, they had up to 4 games in hand on some of the teams. Lymington Town were 11th in the Wessex Premier and were unbeaten, despite being yet to play a home game. They'd not had a game since the 18th August when they got their first win of the season, 2-0 at Andover New Street, having drawn the previous two. I've covered Lydney Town's progress in the competition above but the visitors tonight had beaten Sandhurst Town 5-1 in a replay (after a 1-1 draw) and Frimley Green 3-1 in the competition so far to get to this round. The game started brightly and it was the hosts who were doing all the running in the opening few minutes and a good save from Lymington keeper Nic Jones which resulted in a corner. Lymington soon started to have chances of their own and they too forced an even better save out of Lydney keeper Ellis Boughton. This resulted in a series of corners which came to nothing. Boughton went on to make several good saves during the first half, as Lymington, who included former Andover Town, AFC Totton and one time Wycombe transfer target Mike Gosney had the better of the first half.  The second half saw things evened up a bit but it was the visitors who took the lead on 54 minutes. There was a foul just inside the box and a penalty was awarded, Ashley Jarvis stepped up and converted the spot kick to give his side the lead. The game was becoming a bit lively in terms of fouls and a few booking were handed out by the referee in an attempt to calm things down. Lydney got an equaliser on 68 minutes, the defending could have been better but Lewis Thomson's shot went in off the left-hand post to send the home fans into raptures.  The goal led to Lydney having a spell of dominance but just as it looked as if the game was going to extra time the visitors struck and 87th-minute winner.  Sam House put a good cross in and Jake King headed the ball home to seal the game.

Opening goal from last night as Ashley Jarvis converts a penalty to give Lymington Town the lead. They eventually won 2-1 at Lydney Town and now face Torquay United in the next round.
A post shared by Russell Cox (@russ_wwfc) on Sep 12, 2018 at 7:15am PDT


The attendance of 337 would have been amongst Lydney Town's biggest ever crowds I'd imagine. Though the majority of the crowd went home disappointed, it had been a good night for the club. They'd had their best ever FA Cup run and had hosted the game really well. I found out the next day that they'd had no knowledge of the rugby club charging people to park and were not best pleased that people had been taken advantage of as many would have assumed that they were getting the money. It had been a good value night on their part but from a selfish groundhopper's point of view, I was pleased for Lymington. Their tie against Torquay United in the next round could be potentially shown live on the BBC Sport website and opens up the possibility of an enticing 'double'. We left at 9.45 and made reasonable time home, although the small roads were not most pleasant to drive along in the dark and drizzle. We listened to reports of the England game where they had beaten Switzerland 1-0. This soon gave way to music, with me dropping Anwar off at 11.45. I got home myself 20 minutes later, but couldn't get to sleep for ages. Not great with me being up at 4, but I felt OK for most of the day. 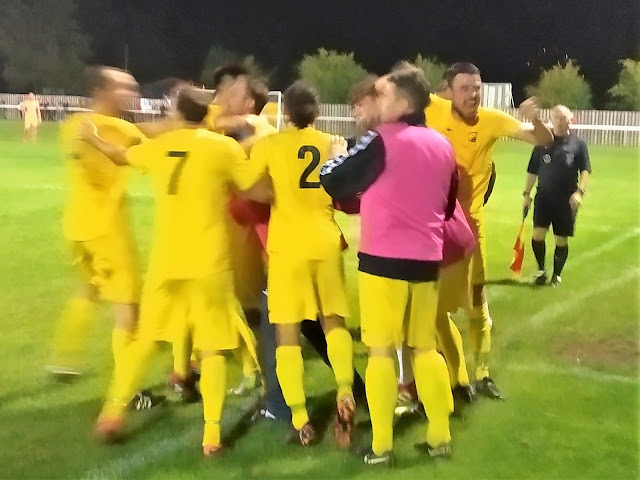 LYDNEY RECREATION GROUND is set in pleasant countryside just outside of town. They are located adjacent to the rugby and cricket clubs. As with most grounds of teams that have seen a rapid rise in recent years, the stands are of the metal 'Arena' type. Though pretty dull, they do have seats in club colours, around 100 in total. The rest of the ground is open hard standing with a capacity of around 1,500.

The tea bar looked decent value and had a basic range of food and drinks at reasonable prices. The bar was spacious and had a decent range of drinks including Thatchers Gold for cider drinkers. Further afield, the town is around a ten-minute walk away and has a decent range of pubs and food places. 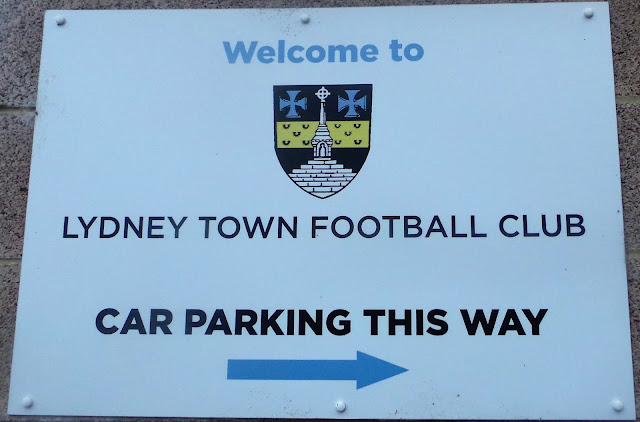 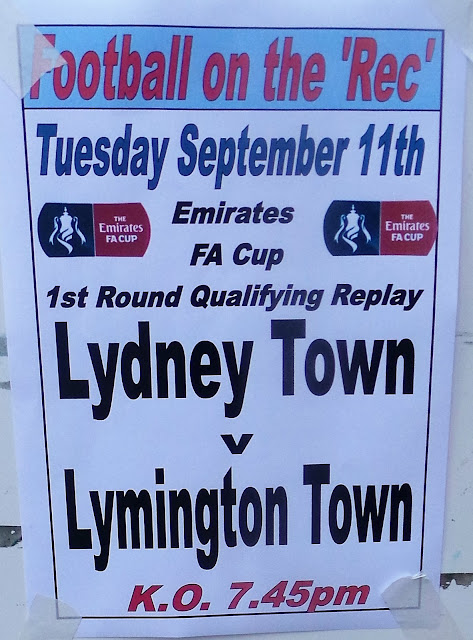 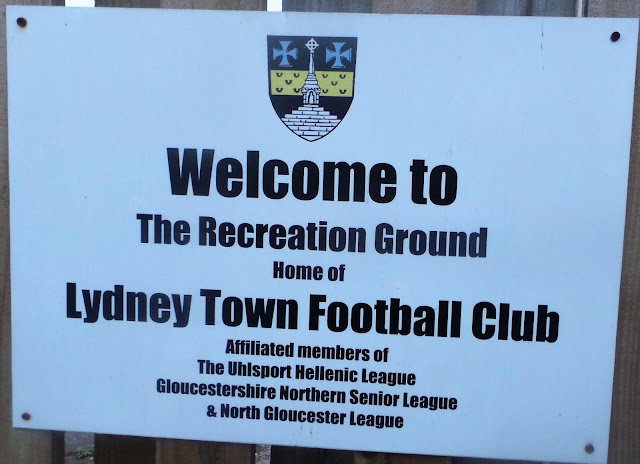 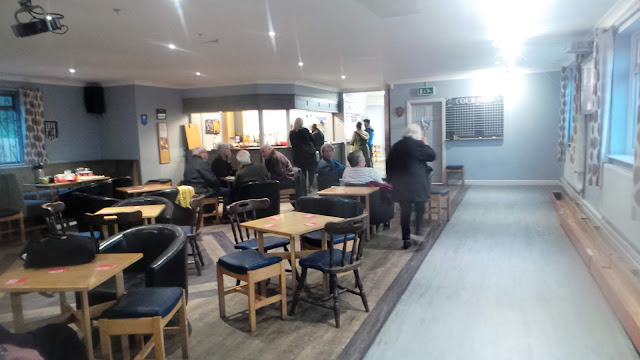 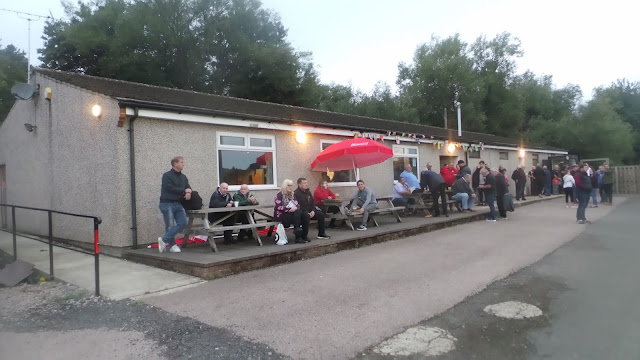 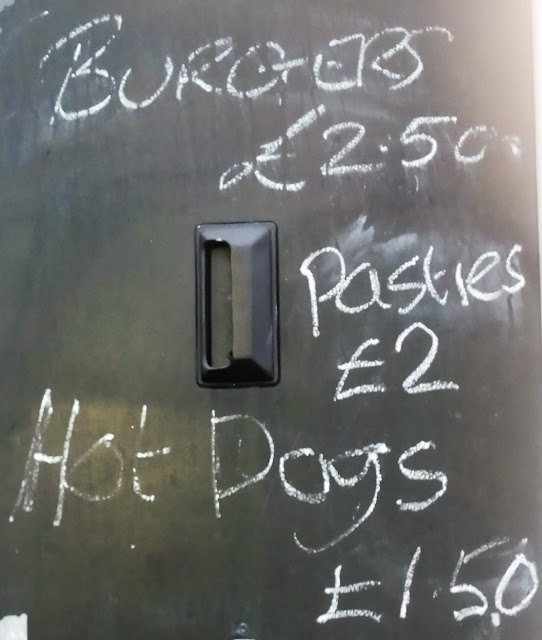 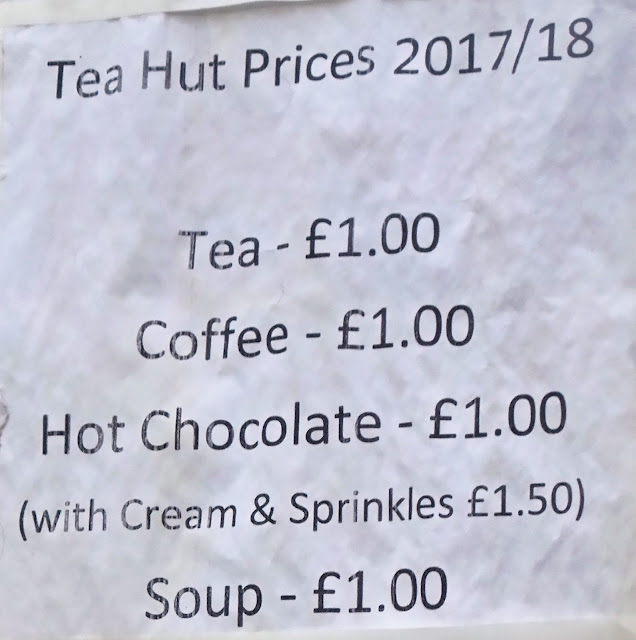 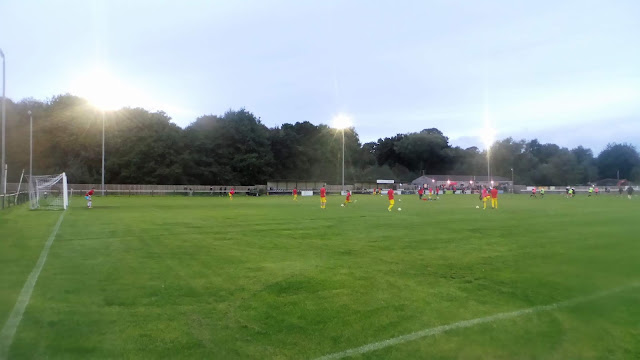 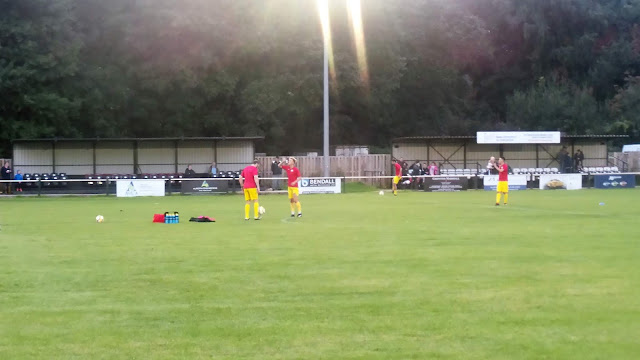 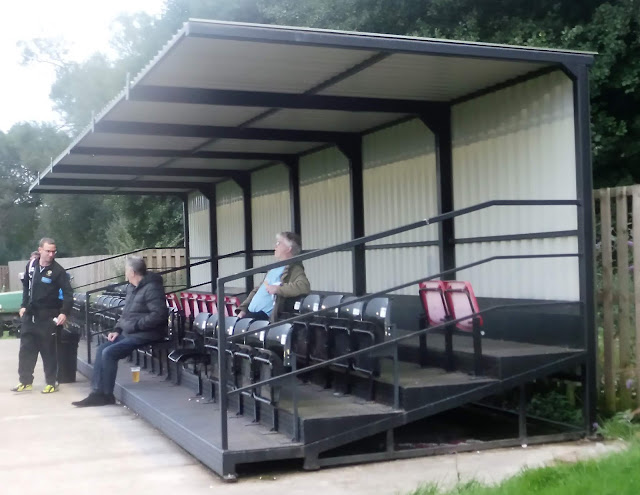 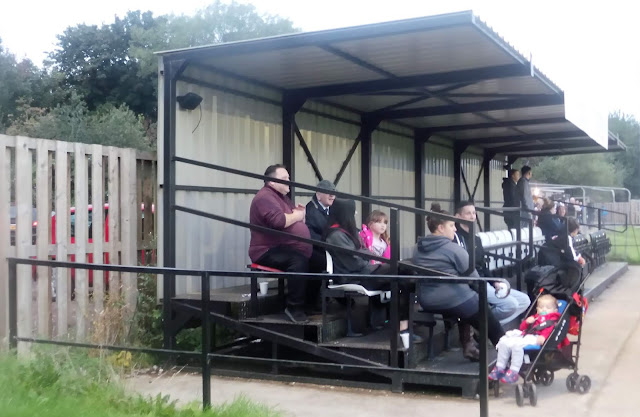 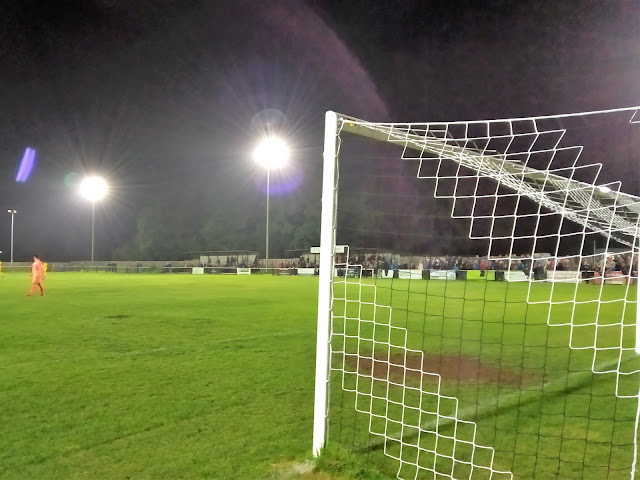 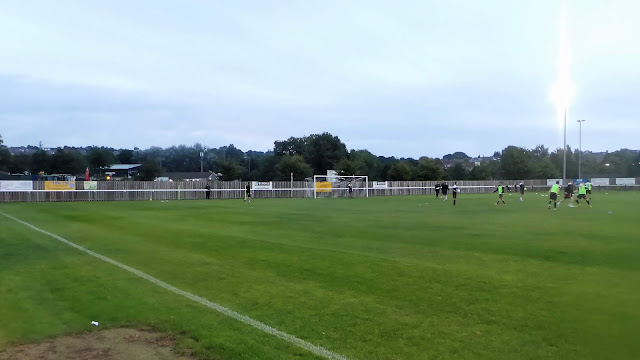 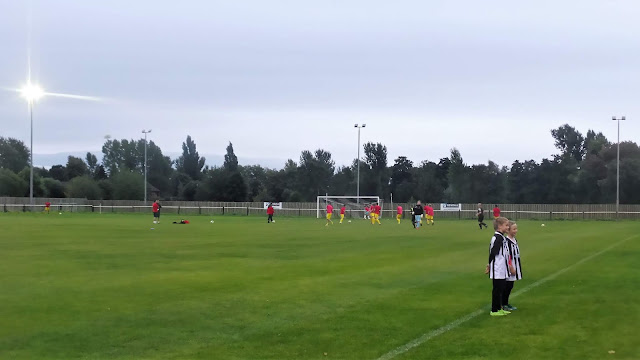 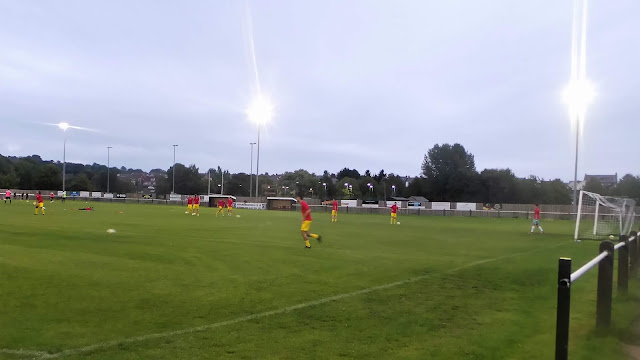