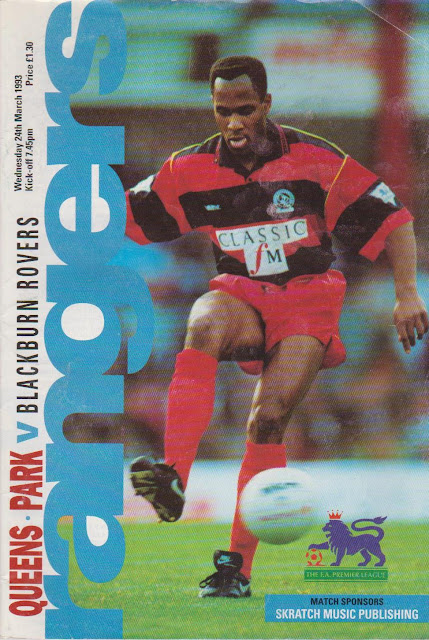 1:  The club was formed in 1886 when two local teams - Christchurch Rangers and St Judes Institute merged. They took their name from their initial base which was Queens Park in Brent.

2:  QPR has had a massive 15 different grounds, the most notable being Wormwood Scrubs (alongside the prison) and the White City Stadium (a 1966 World Cup finals venue for the game between Uruguay and France). They first moved to current home Loftus Road in 1917 and aside from a couple of short spells at the White City stadium, have remained there ever since.

3:  Prior to joining the Football League in 1920, the club played in various non-league competitions including the London League, Western League & Southern League. They've played in the top 3 divisions of the football league, the highest finish coming in 1976 when they finished as runners-up by a single point to eventual champions Liverpool. Low points came during the 1920's when they twice finished bottom of Division 3 South.

4:  In the FA Cup, Queens Park Rangers reached the 1982 final, losing 1-0 to Tottenham Hotspur. A less dignified exit came in 2002 with them going out on penalties at home to non-league Vauxhall Motors in the 1st Round.

5:  QPR won the League Cup in 1967, beating West Bromwich Albion 3-2. Incredibly they were a third division side at the time and came back from a two-goal deficit to bring home the trophy.

6:  There have been a couple of adventures in Europe. Their best run came when they beat Brann Bergen, Slovan Bratislava & 1 FC Koln. This saw them paired with Greek side AEK Athens in the UEFA Cup Quarter Final. Despite winning the first leg 3-0, they conspired to lose the second leg by the same scoreline, eventually going out on penalties.

7:  Queens Park Rangers were the first club in England to have an artificial surface. The brainchild of then manager Terry Venables, the Astroturf at Loftus Road lasted from 1981 - 1988 before they reverted to grass.

9:  Cristopher Samba is both the record incoming and outgoing transfer record fee for the club. He cost £12.5m when he signed from Anzhi Makhachkala in January 2013, only to leave for £12m in the July of that year. My first visit to Loftus Road came in March 1993 for a Premier League game against Blackburn Rovers. My school got free tickets and I was lucky enough to be able to go to the evening kick-off. Goals from Stuart Ripley, Kevin Moran and Mark Atkins saw big-spending Blackburn ease through at the expense of QPR. My next 3 visits came with Wycombe Wycombe in 2001, 2002 and 2003. The latter two visits yielded close games with a 2-1 defeat and a goalless draw. However, my most memorable visit was the 2001 one on a December afternoon. My Dad pulled out of going very late on, but luckily he gave me a lift over to West London before I got the coach home. The players served up an epic 4-3 game, with QPR taking the points. However, referee Phil Prosser's performance was dire. On the stroke of half-time, there was a scuffle after a penalty was awarded for a foul on Kevin Gallen. No problem with that decision, but unbelievably, despite the guilty party being Danny Senda, he sent off Jermaine McSporran who was completely innocent. To cap it all, he then booked Chris Vinnicombe for pointing out his error, then sent off Danny Senda anyway. With Wycombe later going 3-1 down and with a two-man disadvantage, we did incredibly well to pull it back to 4-3 in one of the best games I've ever seen. Later the following year, Wycombe would get their revenge, thumping QPR 4-1 in the home game, with both sides being reduced to nine men this time. 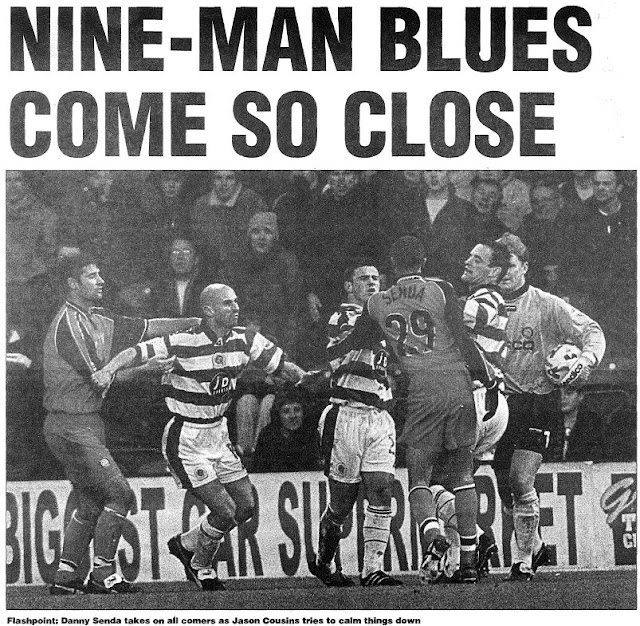 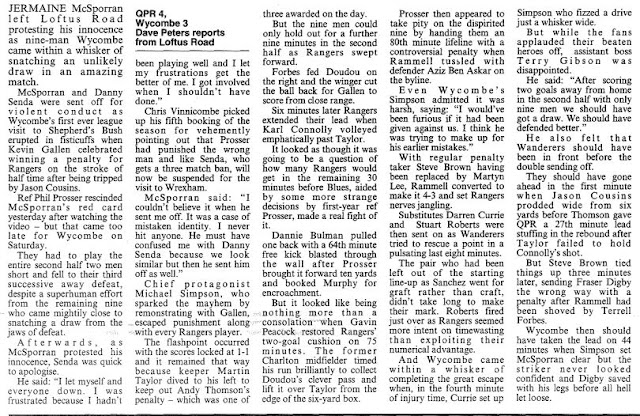 I'd been hoping to revisit QPR for some time, hoping that an FA Cup or League Cup game would come up, but I was always busy elsewhere. The league games were a no-no as tickets started at around £35 when you took booking fees into account. I was, therefore, pleased, when an FA Youth Cup game up, and pleased even more so when an announcement was made a few days before the game, that tickets would be just £3. The weather in the days before the game had been horrible, with 17 cms of snow in High Wycombe. I'd even managed to get my car stuck where I'd parked on the flat near home and had to get the bus to work on Monday, eventually getting it freed and back in my drive after a couple of helpful Everton fans had given me a push. 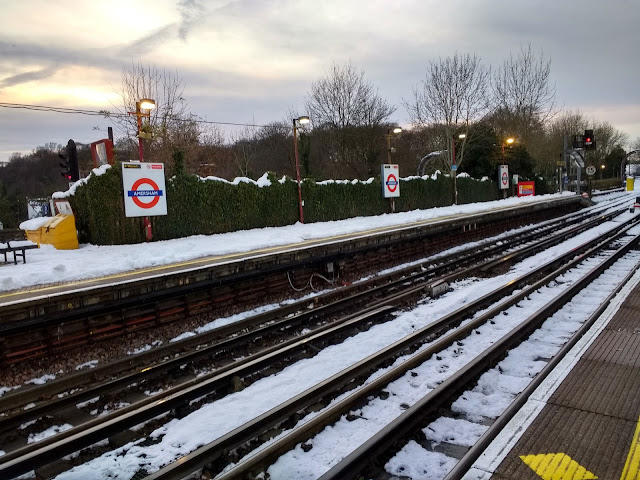 The day of the game was fairly dull, I spent most of it at home, though at least I sold a slightly damaged car wheel for £25 which was a small, but welcome boost to my finances. I saw matches being called off all over the country, though it came as no great surprise. I’d picked a good date to go to QPR as there were no such problems with their pitch or the surrounding areas. I was aiming to get the 3.46 train from Amersham, as if you travel before 4, you save a few quid by travelling off-peak. Despite leaving at 3.10, I didn’t get to my parking spot until 3.45 as there was a set of roadworks delaying everyone. Luckily, I touched into the station well before 4 with my contactless card, so will hopefully get the cheap rate.

After a change at Marylebone and a walk to Edgware Road, I caught my final train to Shepherds Bush Market. I got there around 5.35 and as I had time to kill, went for a look around the market. With that done, I headed for a restaurant I’d earmarked for dinner earlier, namely Merhaba Grill. There I had a Turkish Pizza (called a Lahmacun) with minced meat on it, as well as some fries. Considering it was a fairly nice sit in place, the food came in at a bargain £3.50 and was pretty nice. It was the only time apart from in Turkey that I’d had it, and as there was no cheese on the pizza, it was pretty healthy too. From there, I stopped at a local shop to get a bottle of Ribena and some marmite rice cakes before heading to the ground. It took around 15 minutes as I had to go back after Google Maps tried to direct me through a closed park. One thing I noticed was the complete absence of any snow - either they got none or did a great job of cleaning up. I got there eventually though, getting to the ground at around 6.30. After 10 minutes getting pictures of the outside and buying my ticket, I went in. I chose a seat in the front row which was nice and padded, also offering a fairly decent view as we were in the top tier. 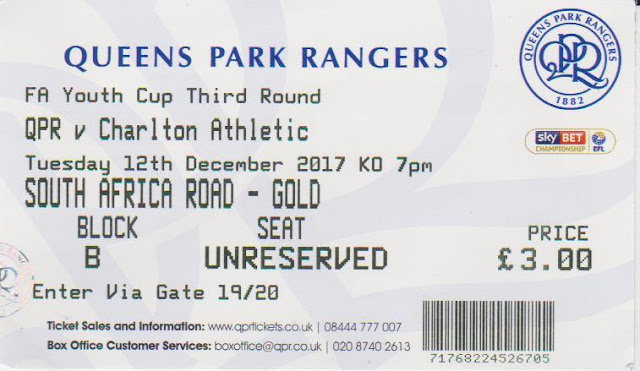 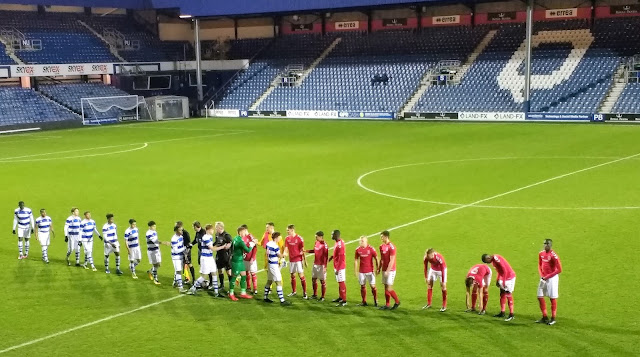 The game started with the visitors having by far the better of the play. They deserved their lead which came on 23 minutes. Following a good run and a smart cutback from Alfie Doughty, Luke Carey finished with a close range deflected shot. QPR had started to get back into the game by now and they were all square 5 minutes later. It was a good ball to Leandro Ribeiro who finished with a great shot on the turn from 15 yards. Despite the visitors still having the upper hand, with QPR having chances on the break, it would take until 70 minutes for Charlton to retake the lead. A penalty was awarded for a handball on the edge of the area and Albie Morgan stepped up and converted successfully. The scoring was completed in injury time. Alfie Doughty spotted QPR keeper Myles Bowman off of his line and curled home from all of 70 yards. It was a spectacular end to a game that had seen some good football but lacked pace at times. There was just the one stand open, it was well populated, but I was unable to find out the actual attendance at the time of writing this blog. 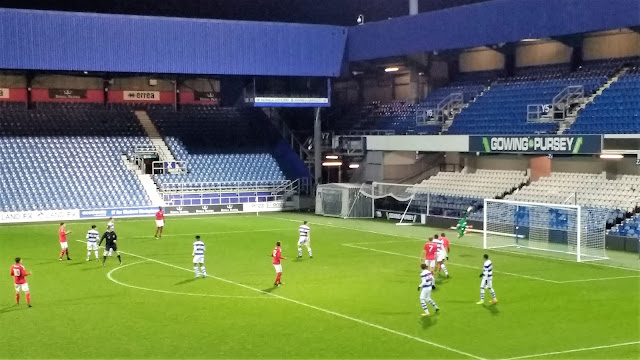 After the game, it was a lot easier getting back. My new found local knowledge from earlier meant that I had a better idea of where I was going. I went via The amusingly named Batman Close and the even better Batman Dental Practice, with it taking 10 minutes to reach the station, plus another 10 minutes for my train. The journey back was a lot simpler too, a seamless change at Baker Street and I was Amersham bound just after 9.30. There were a few delays on the way home, thanks to signalling issues around the Northwood area, but I kept myself busy writing up my blog and catching up online. I got back to Amersham at 10.40. I had to be careful that I didn’t slip over for the second day as the paths were really icy - pretty poor for outside a mainline station. I got back home at 11, watching Dave Gorman’s Modern Life Is Goodish before going to bed an hour later.

LOFTUS ROAD is a fairly old ground. Both ends - the Loftus Road (home end) and School End (away end) are two-tiered and around a similar size. In the top tier of the away end, if you sit further back, the near goal is obscured by the front of the stand which isn’t great. The two side stands - the Ellerslie Road and South Africa Road stands do not suffer this fate as far as I know, aside from not being able to see the near touchline in the front few rows of the latter stand, though this is not as much of an issue.

The legroom is OK, without being overly generous. The stands are pretty close to the pitch and despite its faults, I liked Loftus Road. I didn’t see a bar, nor many pubs, so you might be better off stopping en route. Food wise, the ground is overpriced as all clubs are. The local area is pretty diverse and there are a huge range of places offering great value food and some interesting options from various countries too.

1: Ground facilities & condition (for the level)
They really need to move to be competitive in the Premiership, but it’s OK for the Championship. Lots of restricted views, but I quite like it (6)

2: Area around the ground (parking, food/drink, public transport)
Plenty of stations and takeaways, parking isn’t the most plentiful and the pubs aren’t the greatest (6)

4: Value for money
Pricey for Championship games, but my visit was great value (9)

5: Social Media & Website
Slick and professional as you’d expect from a big team, but a bit corporate (6)

6: Programme
My 1993 issue was a fairly typical example of what was around at the time (6)

7: Game entertainment
Lots of decent play on show, but lacked pace at times (6) 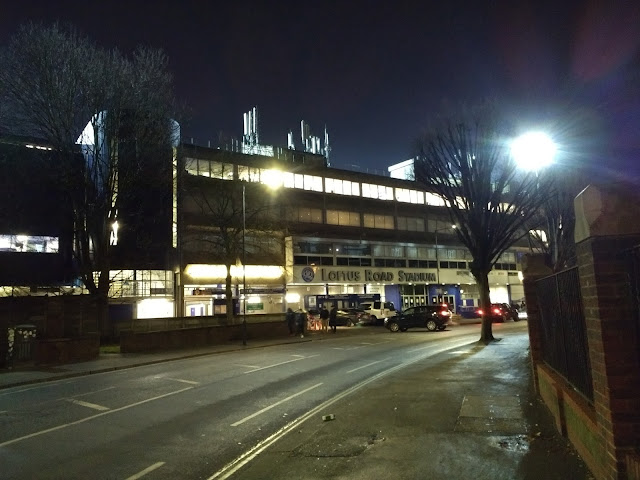 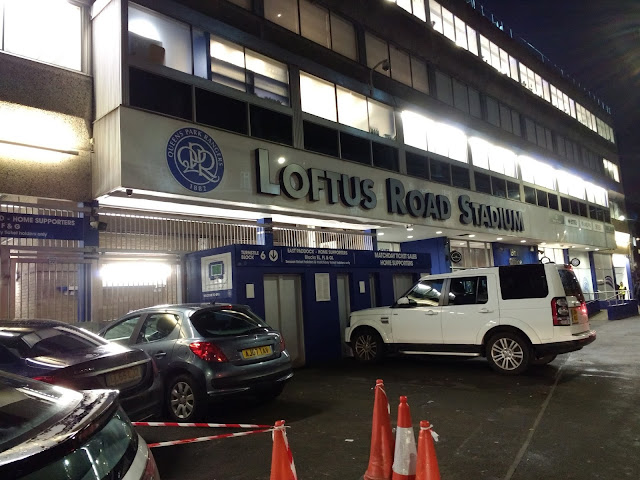 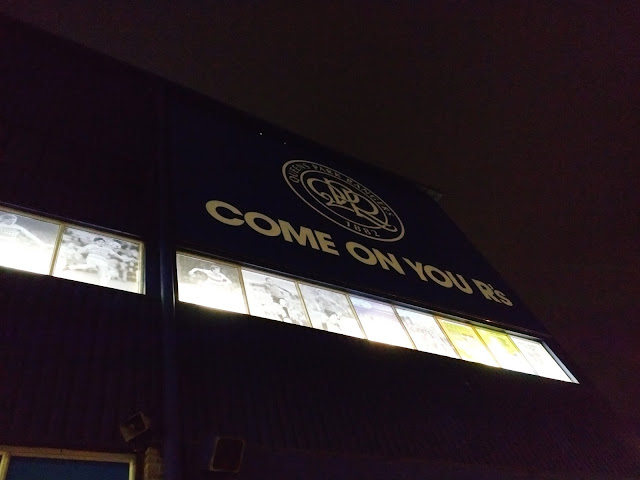 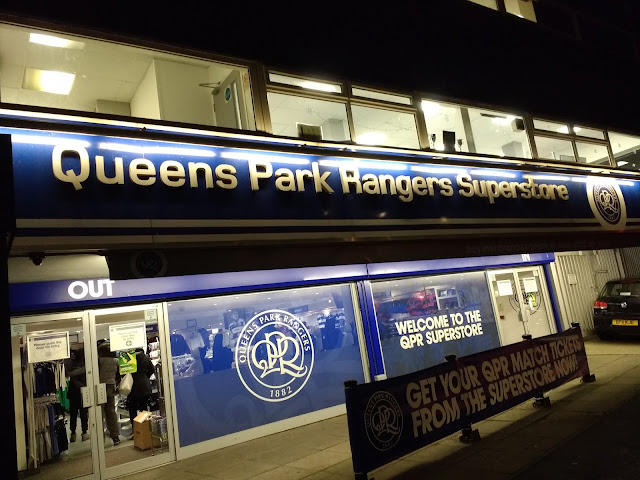 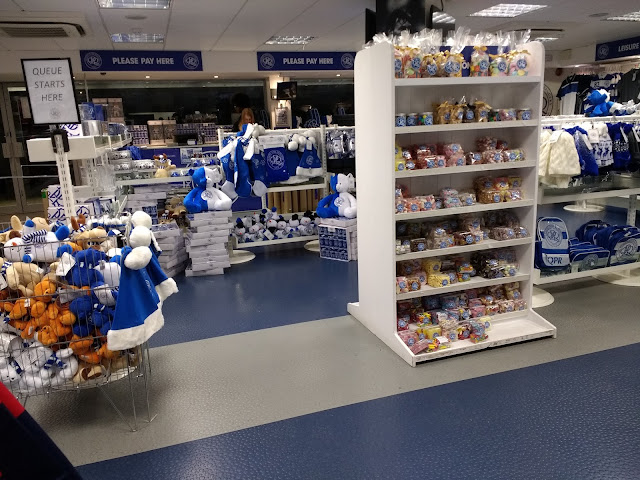 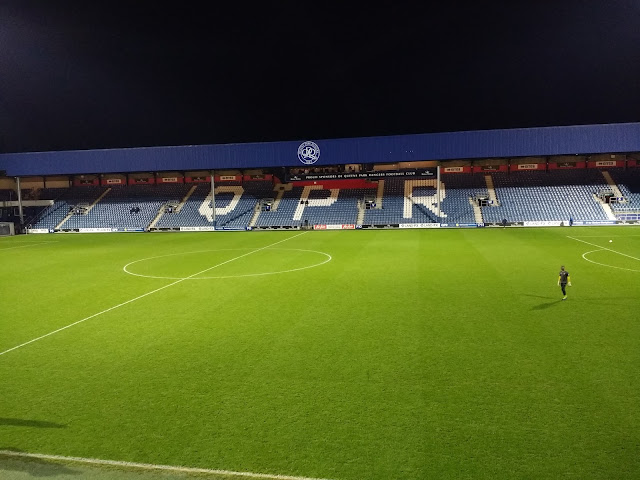 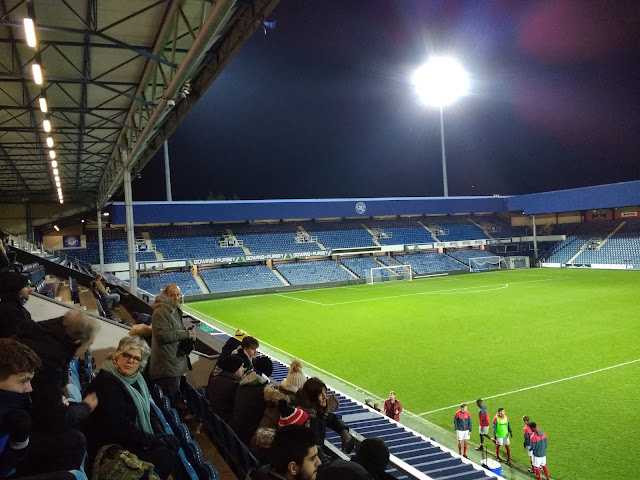 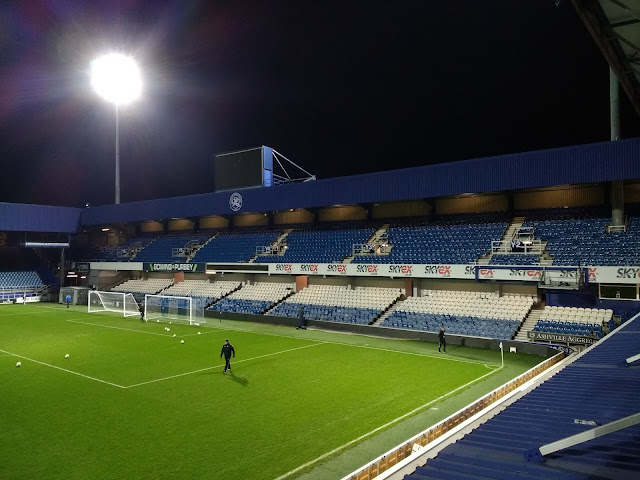