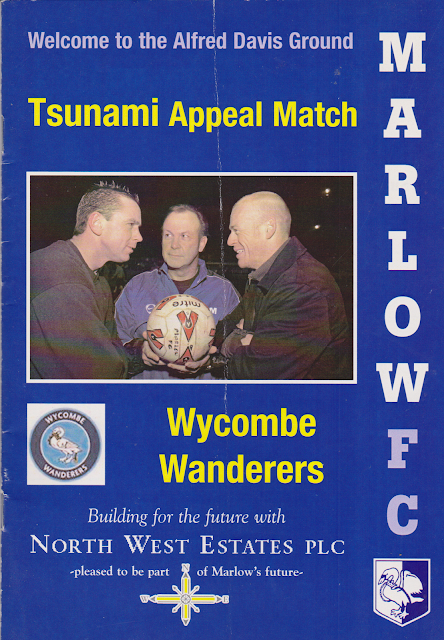 MARLOW FC were formed in 1870 making them one of the oldest clubs in Buckinghamshire, and indeed football. They were also known as GREAT MARLOW during their early years when they opted to remain amateur rather than join the Southern League. After playing in the Spartan and Athenian Leagues they joined the Isthmian League in 1984. They struggled at first, even finishing bottom of Division 2 in 1985-86. However, a remarkable turnaround saw them gain 2 successive promotions and so for the 1988/89 season they were promoted to the Isthmian Premier, which at the time was the second tier of non-league football. An incredible season in 1993/94 saw them finish 3rd in the Isthmian Premier, 15 points behind champions Stevenage Borough.

However, a sharp decline in fortunes saw them relegated the following season, before suffering a further drop two seasons later. League reorganisation saw them effectively move up a level for the 2002/03 season as the Isthmian League chose to switch to a regional second tier rather than 3 non-regional tiers. The establishment of the Conference North & South for the 2004/05 season saw them drop a tier in pyramid terms and also a switch to the Southern League due to geographical reasons. They've remained there ever since, switching between it's 2 regional second tiers. That was apart from the 2012/13 season when relegation the season before saw them go down to the Hellenic League. The bounceback was immediate, and they romped to the league title losing just once all season, and finishing 16 points clear of their nearest challengers Wantage Town. Since returning they have finished in the lower half of the league every season, though never in danger of relegation. That could be set to change this season however, as they sit in 9th at the start of my latest visit. They could potentially beat their previous best finish in the Southern League, which was 6th in 2005/06, though 2nd placed Farnborough would provide a tough test. 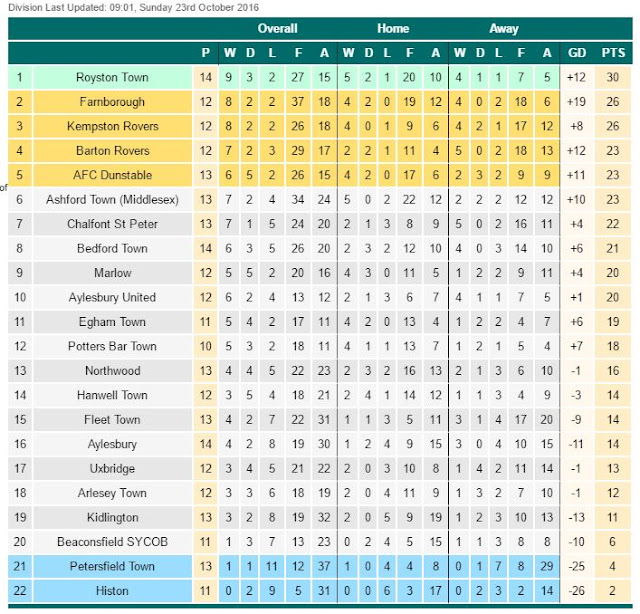 Marlow were one of the leading lights during the FA Cup and are indeed the only team to enter in every single year of its existence. In 1896/97 they reached the semi-final - losing to Old Carthusians in a replay, having also reached the same stage 6 years prior, only to crash 5-0 to Old Etonians. In the modern form of the competition, the first half of the 1990's was most productive with the club reaching the 3rd Round twice in 3 seasons. David Lay's screamer in a 5-1 defeat at Tottenham during 1992/93 season bought the team worldwide attention, but it was the run 2 seasons later that they achieved their most impressive result. Oxford United were a second tier football league side the season before, and would go on to finish 7th in the third tier that season. However that counted for nothing as Marlow causing a huge upset sending them packing 2-0. Sadly there is little coverage of this online, though the Match Of The Cameras were at Marlow the previous season as they lost 2-0 to Plymouth Argyle in the 1st Round.

In the other FA Competitions, Marlow were twice semi-finalists in the FA Amateur cup in their early days. In the modern day competitions, they reached the 4th Round of the FA Trophy in 2004, losing 4-0 to then Conference side Tamworth. The 5th Round of the FA Vase has also been reached twice, the latest being in 2000/01 when they suffered a 1-0 defeat to Marske United. Locally, Marlow are the 5th most successfulul team in the Berks & Bucks Cup, winning it on 13 occasions. The last was in 1994 when they defeated Chesham United in a game played at Reading's old ground, Elm Park. 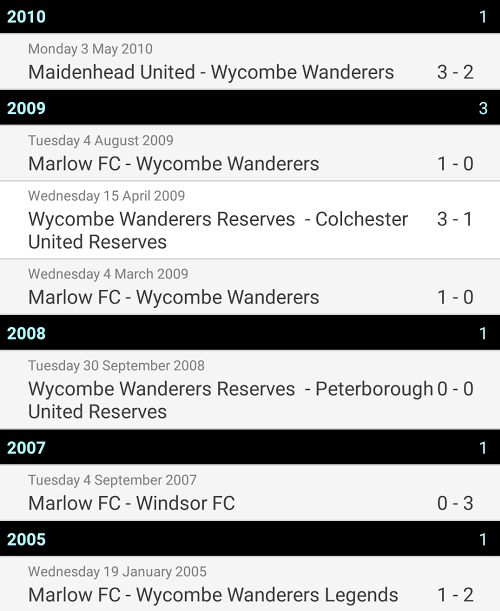 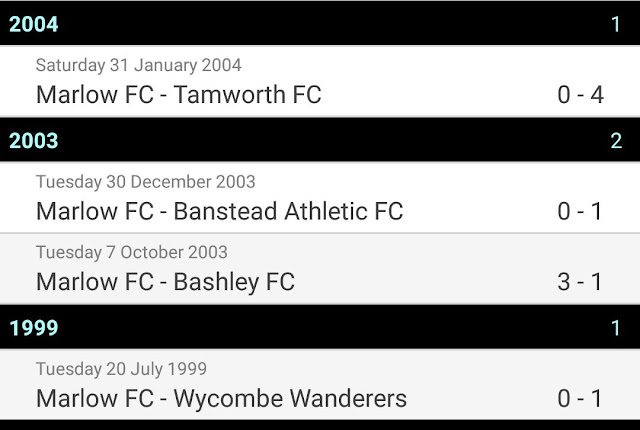 Being fairly local to me, I've visited Marlow FC a number of times before, though not as a groundhopper and none really stand out as being memorable. The first was a 1-0 victory for a strong Wycombe side in a game that I remember for us fielding a Spanish trialist called Jordi. However, he didn't live up to his exotic sounding name, and was promptly sent packing after putting in a mediocre performance. Later visits mainly consisted of Wycombe reserves games and Berks & Bucks Cup finals where Marlow was chosen as a neutral venue for games between Wycombe & Maidenhead. I've expanded on a couple of visits below - my latest visit, and a game between Marlow and Windsor that I happened to go to when Windsor had a number of ex-Wycombe players on their books. I covered this game in my 'Chairboys Forever' blog that I took down some years ago. 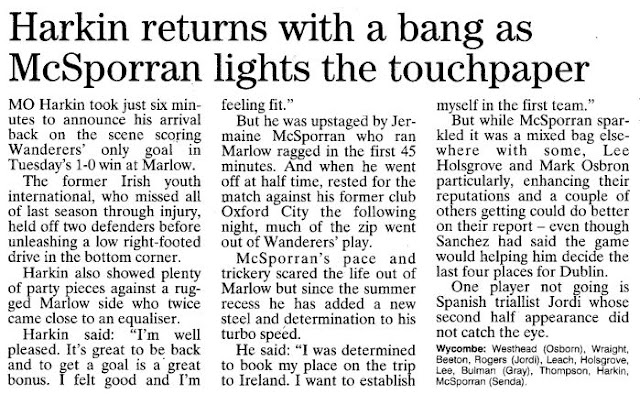 Marlow have been in every FA Cup since it started back in the 1870's, the only team to achieve such a feat. They have also had some great days out, most notably when Dave Lay scored the best goal of the game in a 5-1 defeat at Spurs in 1993.

No such luck this year however as their interest was ended at the Preliminary Round stage. Windsor were a cut above Marlow, who to be fair had a few players missing. But still they were very poor and only started playing once they went down to 9 men.

Windsor are a much-changed side to the last one I saw, back in the days when Dennis Greene was manager. It's fair to say that they ain't as good as they used to be. They had also spent a lot of money upgrading their pitch, only for their tenants Slough Town to renege on a deal that they had signed and pack their bags for Beaconsfield. But they took the lead in the first half. A good through ball found Jon Case who slotted home.

Marlow then had a man sent off for bringing down a Windsor player when he was the last man. From the resulting free kick Ryan Parsons - one of the few players remaining from the Dennis Greene era, and an ex-Wycombe youth teamer, slotted home following confusion in the Marlow defence.

There was nothing scrappy about the 3rd goal. A great shot from Parsons evading the Marlow defence and keeper, and the match was as good as over. A half-time rollicking from the Marlow manager did little to inspire his side and Windsor controlled the second half.

That was until Marlow had another man sent off, this time for foul and abusive language to the referee. This seemed to perk Marlow up, and they had a flurry of shots and were unlucky not to get a goal back.

It was a good evenings entertainment, well worth the admission money. And a lot better than some of the games I've seen from Wycombe this season. 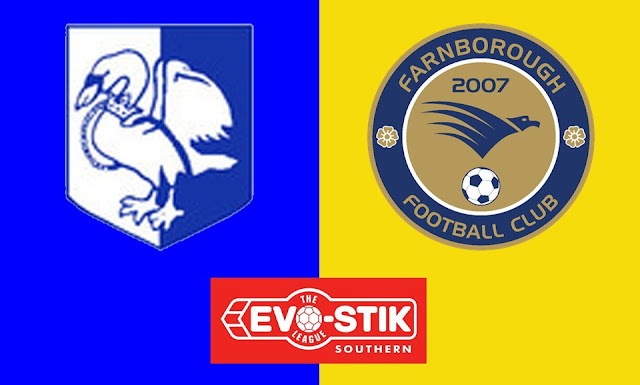 
I was on my own on this week, as all my groundhopping pals busy elsewhere. With the nearest unticked ground at Alton being 50 miles away and it being an expensive time for me, I decided that a revisit was in order. Burnham and Chalfont St Peter were considered, but eventually settled on Marlow v Farnborough. It was a game that appealed to me with Farnborough having several well-known players, having been relegated due to financial issues last season. It would also be a chance to update my blog for a ground that deserves a good write up. Also, despite it being my 12th visit, I had a surprisingly small selection of photos, and with me not having been in over 6 years, it would also be my first time experiencing it as a groundhopper, rather that someone who just went for the choice of game. 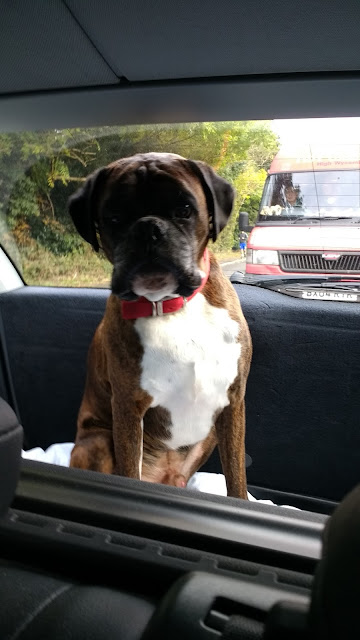 It was my usual day off on the day of the game and so it was the usual walk down town, where I picked up my train tickets for Saturday. I came home and was pleased to see that Baxter, my Aunt's Boxer dog who we were looking after for a few days. had arrived. In the afternoon we took him for a walk and after I came back I spent the afternoon relaxing and catching up on various things. After having a dinner of Chilli Concert Carne, it was good not to have to rush. I left just before 7, getting to the ground 25 minutes later. I paid a reasonable £8 and spent pre-match chatting to various hoppers, one of which, Ken from Leicester, was completing the Southern D1 Central. I'd expected a decent amount of fans from the visitors, considering they were doing so well and it was half term week, but not many had made the trip over from Hampshire. 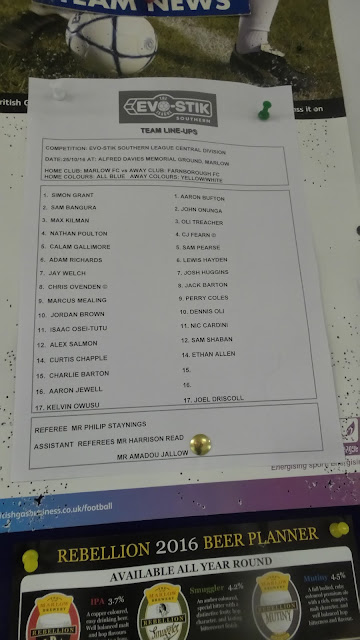 I had a decent elevated view from the main stand for most of the first half and despite the visitors being the better side first half, it was goalless at the break. The second period was not a lot better and for a long time it looked as if it may be a stalemate. It was going to take something special to break the deadlock and it turned out to be the hosts that had it in their locker. Marlow were awarded a free kick not far from the edge of the area following a trip. Forward Marcus Mealing stepped up and smashed the ball into the left-hand side of the goal, past the despairing dive of Farnborough custodian Aaron Bufton. This seemed to open the game up a bit, but it was Marlow who had the best chance of another goal, having a shot cleared off the line, Farnborough had their chances, but just seemed too laboured to make significant impact. The game finished around 9.40 and I was back inside just after 10PM, staying up for an hour when I got in, before going to bed. 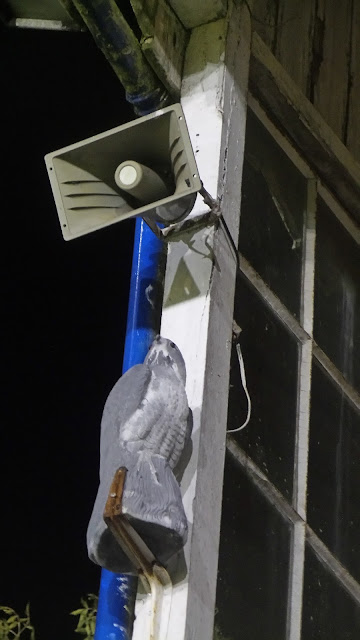 THE ALFRED DAVIS MEMORIAL GROUND, also known as OAK TREE ROAD is a decent non league ground, which suits Marlow FC well. The best area is an imposing main stand, which is quite a classic design and as it is elevated, offers a good view of the action for 250 spectators. The rest of the ground is terracing, with areas of cover along the side and behind the far goal. There isn't too much in the immediate vicinity of the ground, but the bar does Rebellion beer from the local brewery and the catering is good, with home made shepherds pie so I am told. If you have time then the town is half a mile away and has a reasonable choice of outlets. 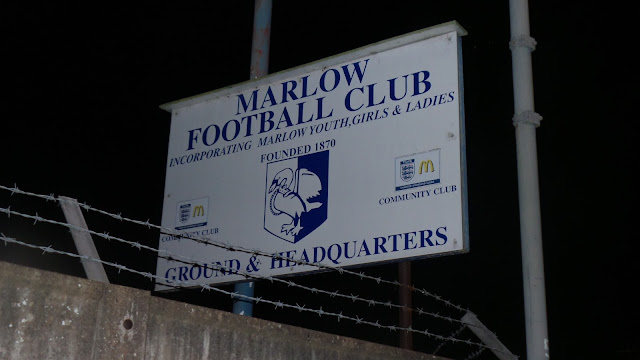 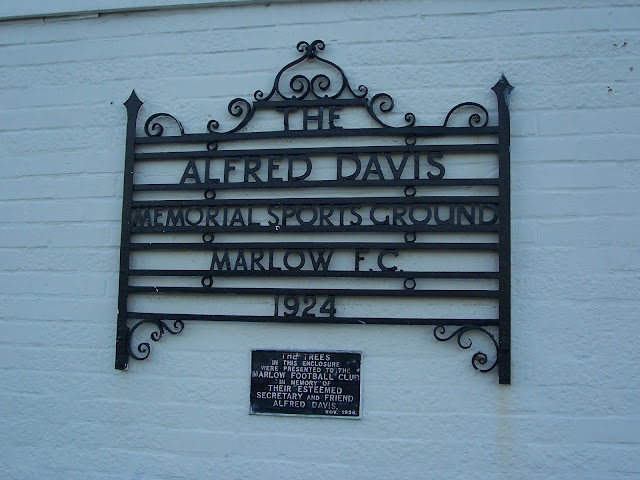 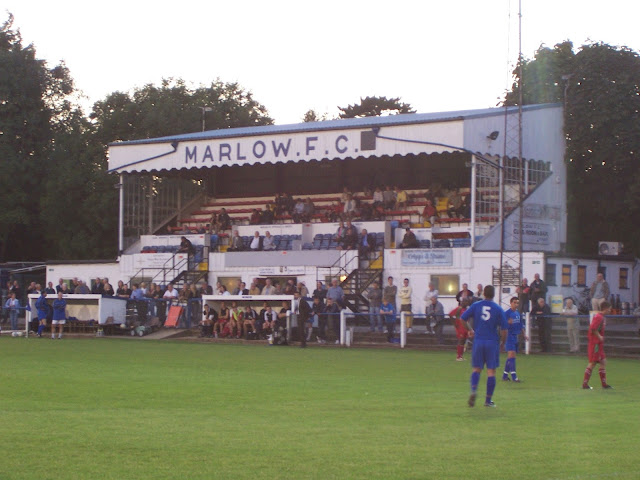 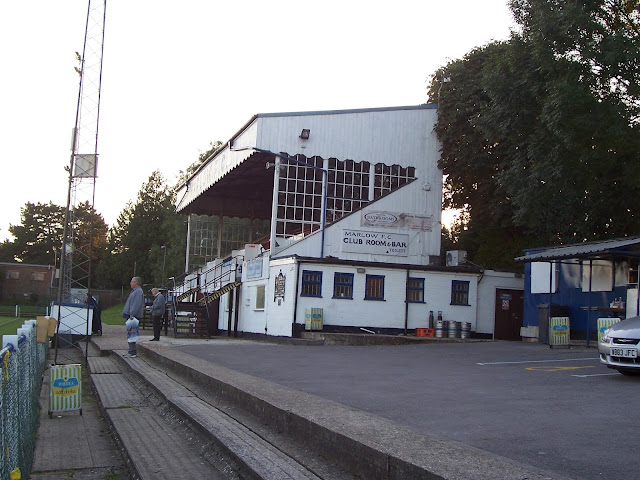 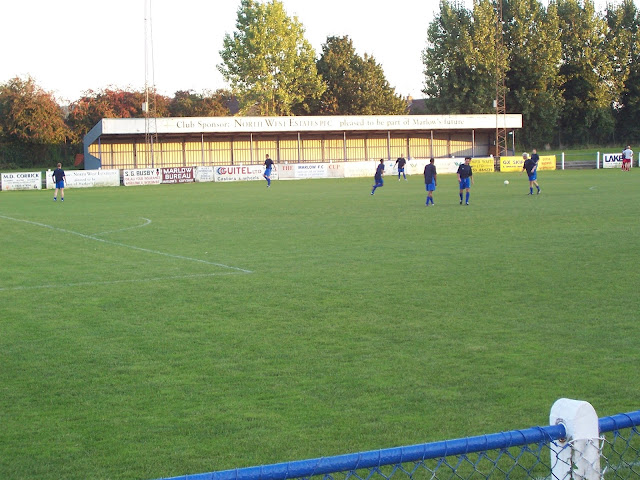 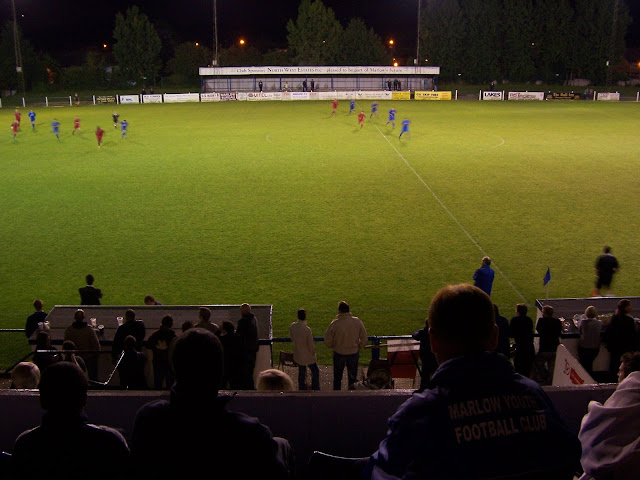 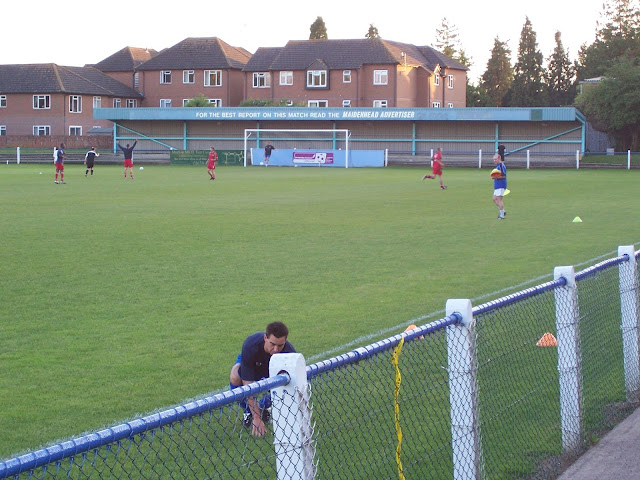 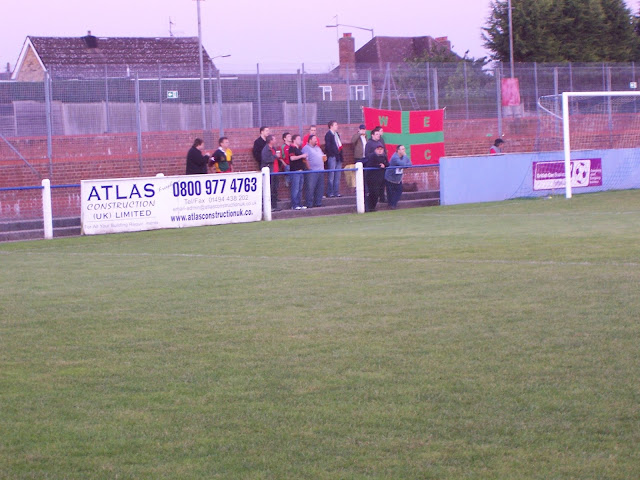 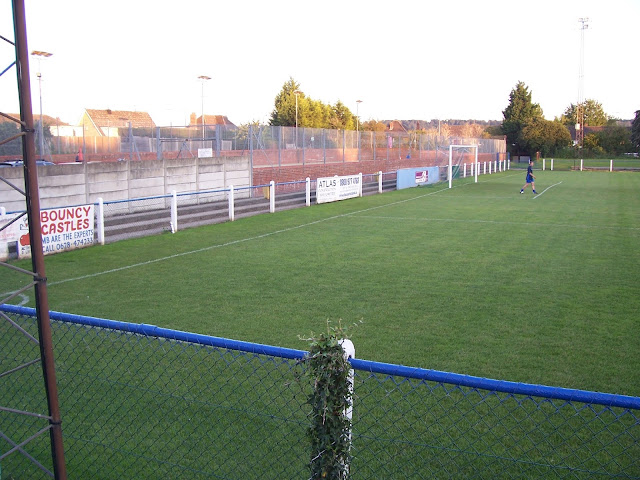 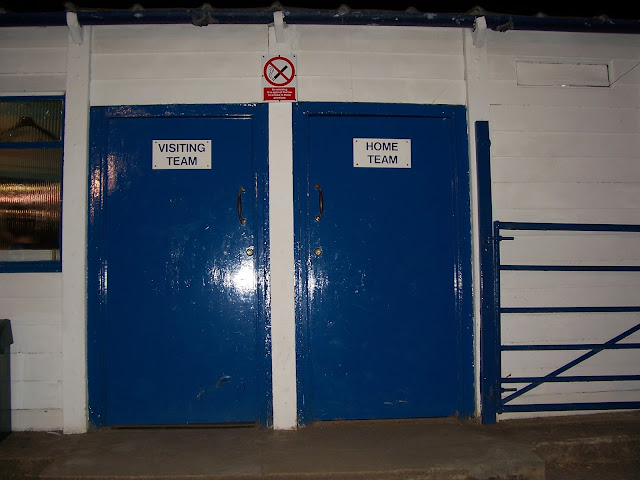 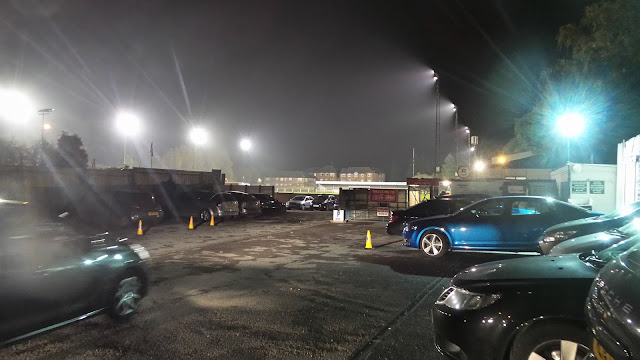 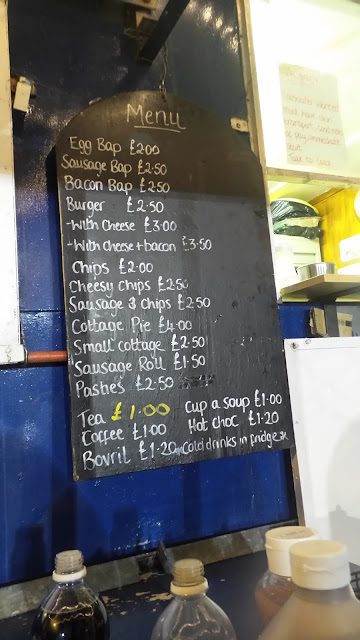 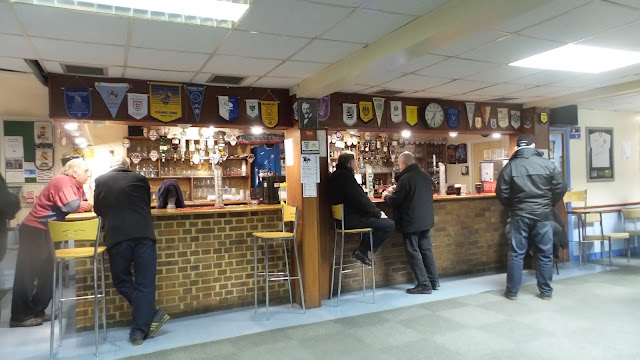 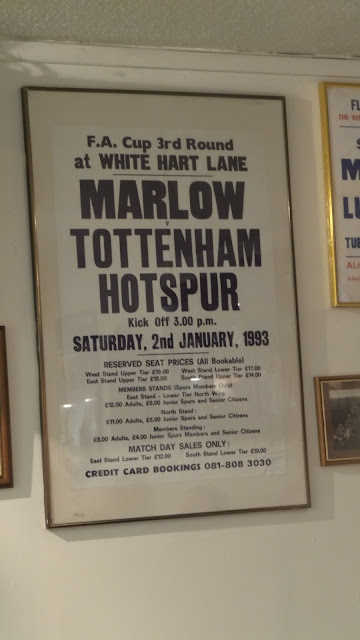