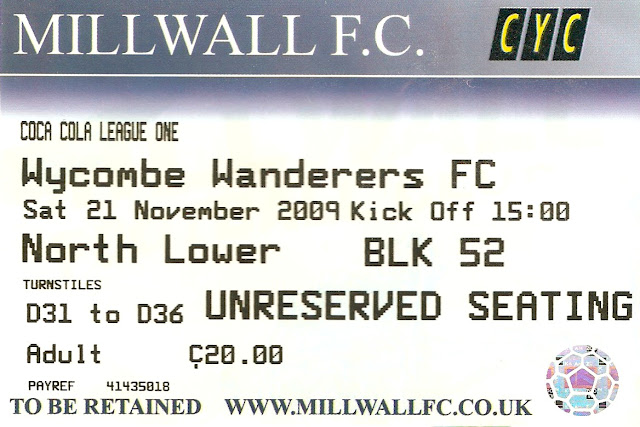 Millwall FC were founded in were founded in 1885. In footballing and general public circles they are most known for the minority of hooligans that congregate within their support. The most famous incident came in the 1985 when football hooliganism was at it's peak. The Fa Cup Quarter Final between Luton Town took place on Wednesday 9th March 1985 and featured massive riots after Luton Town decided not to make the match all ticket and a huge following came down from South London. Despite this most of the 31 arrested for the disorder claimed to be Chelsea or West Ham fans and the incident led to bans on away fans by Luton Town and Margaret Thatcher's clueless Tory government wanted to roll it out nationwide, with no consideration for the normal decent fan.

On the pitch they have had plenty to shout about. There have been turbulent times with their peak coming in the late 80's when they spent 2 years in the top flight. Their best finish came in the 1988-89 season when they finished as the 10th best team in the country under John Docherty's stewardship, the period of success was kick started by Arsenal boss George Graham earlier in the decade. On the flip side a serious period of decline happened in the late 50's and early 60's when the club spent several seasons in the 4th Division, their lowest ever standing since joining the Football League in 1920.

In the FA Cup Millwall reached the final but lost to Manchester United in a game played at the Millennium Stadium in Cardiff. As losing finalists, due to Manchester United's Qualification for Europe via other means, they were entitled to a place in the UEFA Cup. In their sole European outing they lost to Hungarian side Ferencvaros over 2 legs though they did gain a credible draw in the home leg. On the flip side they will want to forget FA Cup giantkillings against non league sides  Slough Town and Woking.  They have 3 League Cup Quarter Final appearances to their name and were Football League Trophy Finalists in 1999, losing to Wigan Athletic at Wembley Stadium. 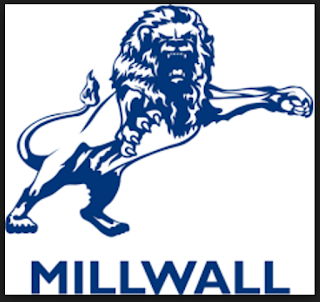 I made my first trip to The New Den just after the turn of the century and as I was not a groundhopper at the time, little did I know it was my landmark 50th ground. Wycombe were actually going well at the time but were not fancied to get anything from their trip to South London. This looked to ring true as Neil Harris gave the Lions the lead in the first half, but Wycombe had an ace up their sleeve. The fact that Millwall were down to 9 men, following a controversial refereeing performance from Phil Dowd might have had something to do with their second half collapse.

In any case Wycombe deserved a great amount of credit for coming back and having large spells of domination. Andy Baird got the equaliser before Dannie Bulman seized on a mistake by former Wycombe player Matt Lawrence to grab a 69th minute winner. Elderly coach organiser Harold was taking no chances on departing the ground, ordering all curtains on the coach to be closed so the natives couldn't see our delighted faces. 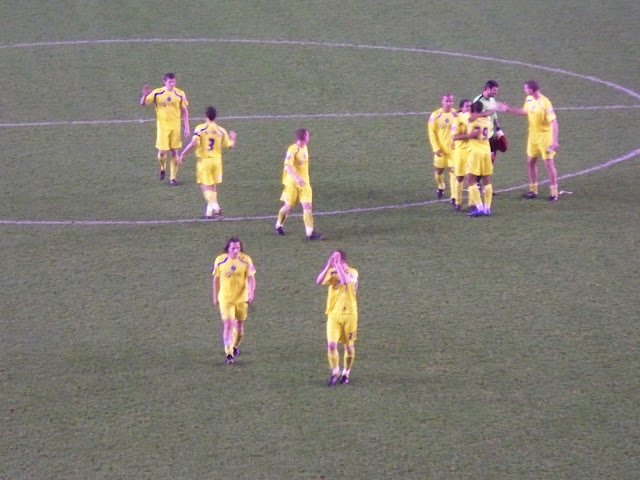 If Wycombe hadn't been fancied in my previous visit The New Den, then a victory on the second visit was nigh on impossible. We were in the midst of a run of 14 games without a win as they travelled to the high flying Lions. This time I decided to go on the train with the rest of the Wycombe fans, stopping off at some fairly bland watering holes. This was before my quest for quality standards in pubs, mainly done on my own as other do not appreciate a good thing when they see it!

This game was notable for future Wycombe manager Gareth Ainsworth making his debut and his control of the midfield was what we had been crying out for as we had looked pretty pathetic in all aspects during the run, including a 6-0 thrashing at Huddersfield, live on Sky. This was a much improved performance with Wycombe winning 2-0 with goals from Chris Westwood & Kevin Betsy. Remarkably it was Millwall's first home defeat in 8 months and 14 games. 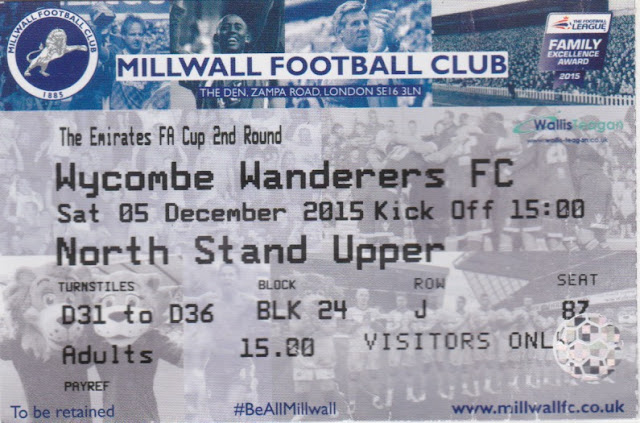 When the draw was made for the FA Cup, I was bitterly disappointed to pull out Millwall away. It would be an exceptionally tough draw, especially with us not being in the best of form when the balls came out. I'd been hoping for Salford away or a meeting with mates and after listing the teams in order of preference, Millwall came out 23rd. After others confirmed that they would be attending, I decided to go along too. It had been a while since I'd been to The New Den, plus it would be a nice day out in London. I'd also get to update this blog and tickets were not too bad either at £15 a pop. 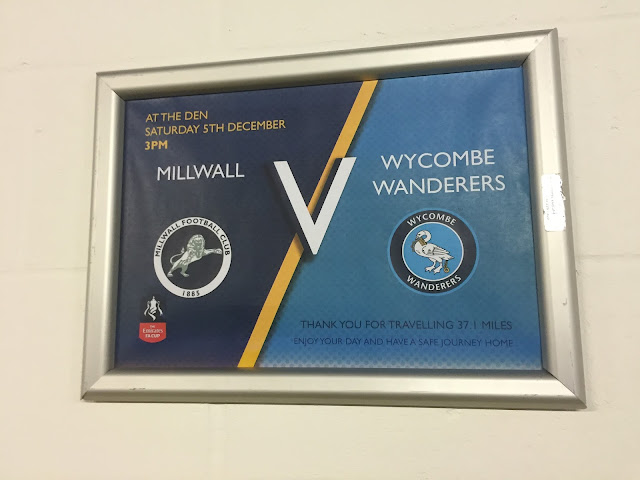 I'd had a fairly decent nights sleep the night before the game and woke up at 9.15. After having some breakfast, a bath and doing some bits online I was ready to go. I had to pick up a prescription plus a paper and some drinks for the journey from our local shops, but by 11 I was parked in a road nearby Amersham station. It seemed a little more busy and chaotic than usual but I still got my train OK, having to get the Metropolitan Line to Farringdon. I was tempted by my usual haunts at Euston as the train went past there but decided to stick with my current plan as it was only a temporary set up. I passed the time by doing the Daily Star football crossword and looking on Facebook. When I got to Farringdon I went overground to Loughborough Junction. I nearly missed my connection as I only noticed that the Thameslink train had parked about 100 meters down the platform. Even then it stopped for ages at each station and information was sparse, so I wasn't even sure if I had the right train. 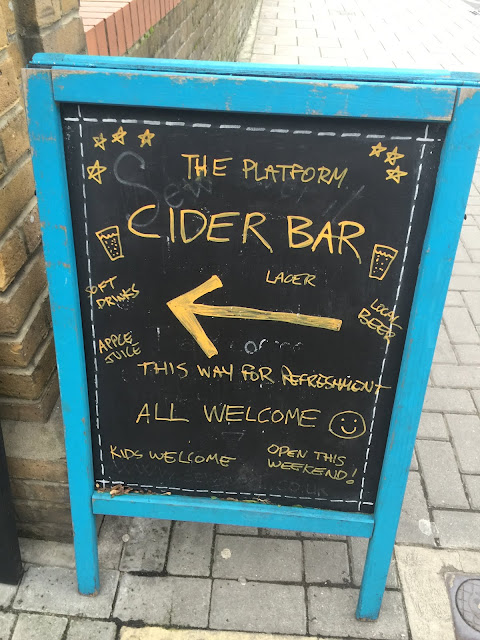 Luckily it was though and around 12.45 I was at Loughborough Junction. The reason for that random location was for a pop up cider bar called 'The Platform Cider Bar' which was there for the weekend. It was a strange old place, sharing a building with an arts and crafts workshop but it was a diamond with some great stuff to try, run by a person who knew his stuff. First up was a pint of Guildford Dancing Juice which was very pleasant and kicked off my days drinking a treat . Second pint was Turners Dry which unbeknown to me I'd already had. Who cares though it was good stuff. Before I left I had a half of Monk's Delight Mulled Cider which set me up a treat for the 3 mile walk to Millwall, I'd chosen this option as the trains weren't much quicker. I stopped for chips at The Flying Fish chippy somewhere along the way but overall it took me an hour to get to Millwall, with me getting there bang on kick off. 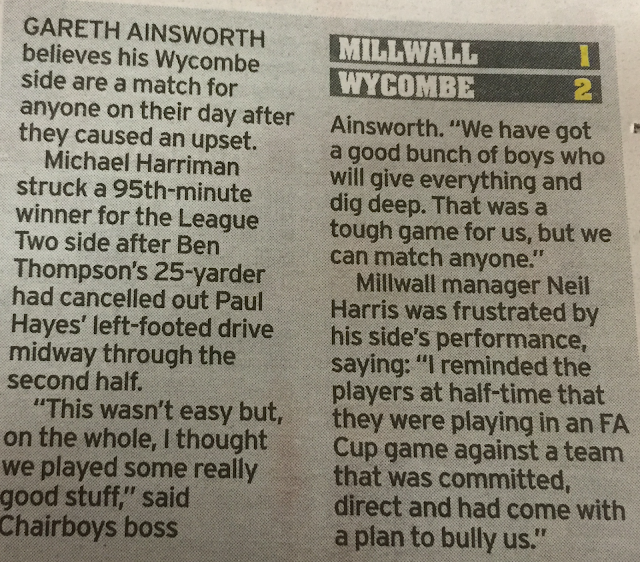 So a brilliant and well  deserved victory for Wycombe which left me very proud of my team.  I joined my fellow Chairboys in the queue for the train back which came and got to London Bridge very quickly. The Jubilee Line to Finchley Road was reliable too, but as ever the connection to Amersham left me with a long wait. Rather than hang around at Finchley Road I got the Chesham train part way to Chalfont, then waited 15 minutes for the final leg of my journey. I got back to Amersham just before 7, stopping off at a shop to get some Irn Bru on the way. I spent the evening on my computer and watching MOTD before going to sleep just after midnight. 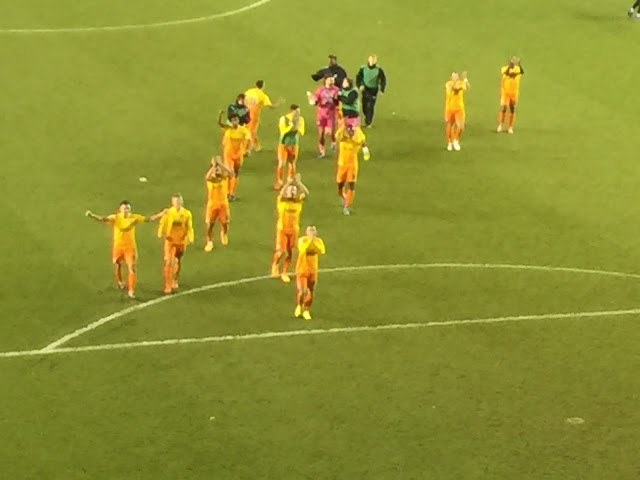 THE NEW DEN is a smart all seated venue. Despite Millwall's reputation, it's a fairly nice place to go to in the grand scheme of things. It has around a 20,000 capacity, with the away end seating around 3000 in the upper tier, though this can be extended to the lower tier. Views from all areas are excellent in my opinion and legroom is also good. There's all the usual amenities in the concourse, plus a well stocked club shop outside the ground. One notable fact is that the ground was used for the Sky One hit football drama 'Dream Team' with midlands based Harchester United using it as their 'Dragons Lair' ground when scenes were filmed there.

Around the ground is not the best area, though it is mainly industrial units, so there are no pubs that I know of. There is however the Millwall Cafe on the industrial estate, which has been OK when I used it. However your best bet is to go on the train and eat and drink elsewhere in London, where the choice is great if you buy a Travelcard or use an Oyster Card or contactless payment. 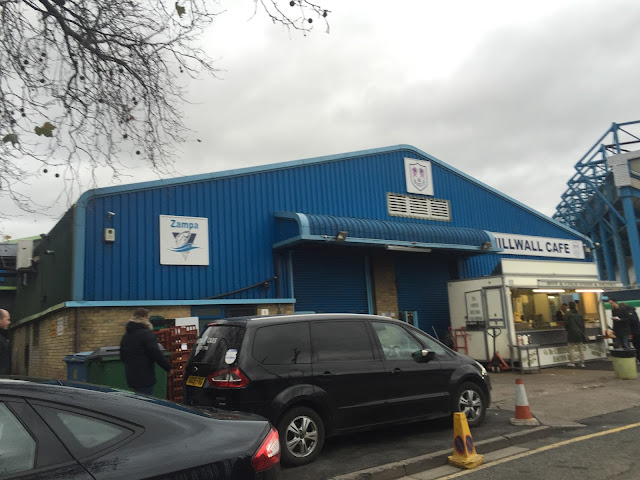 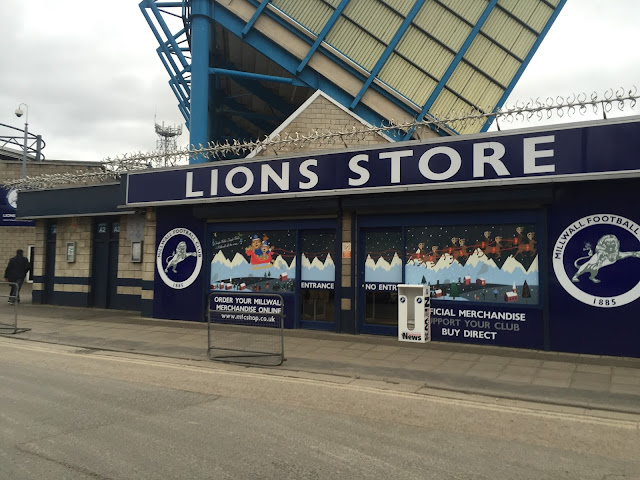 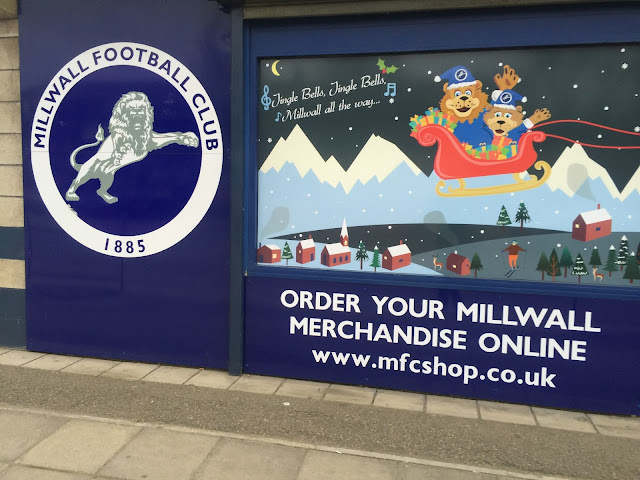 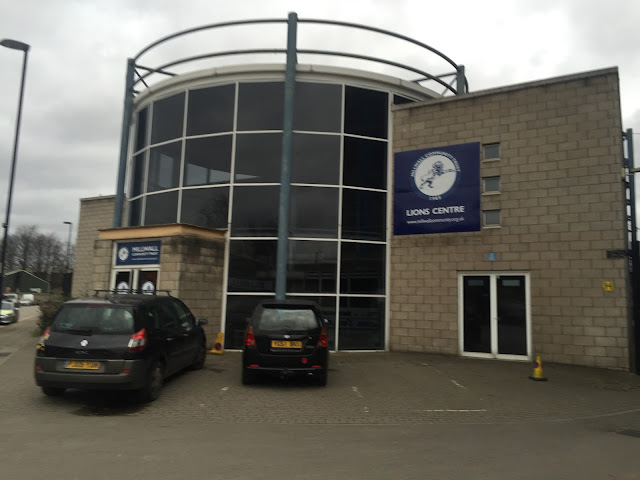 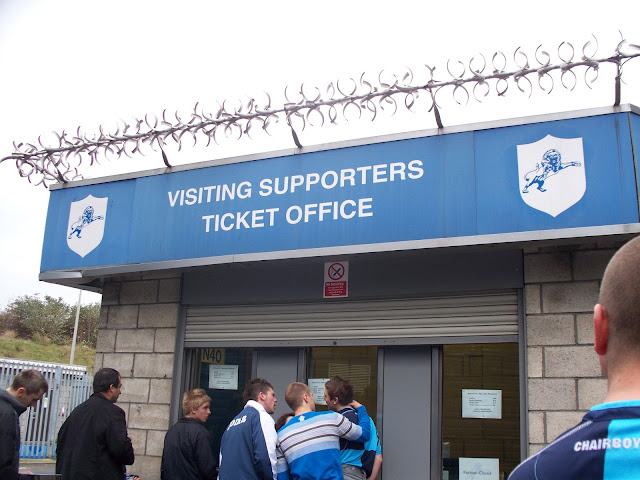 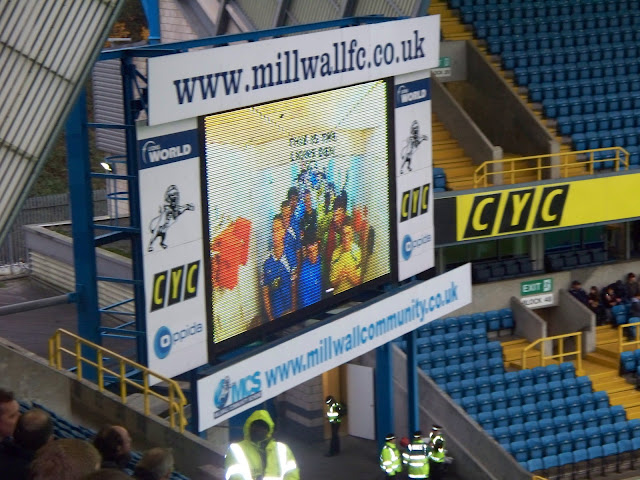 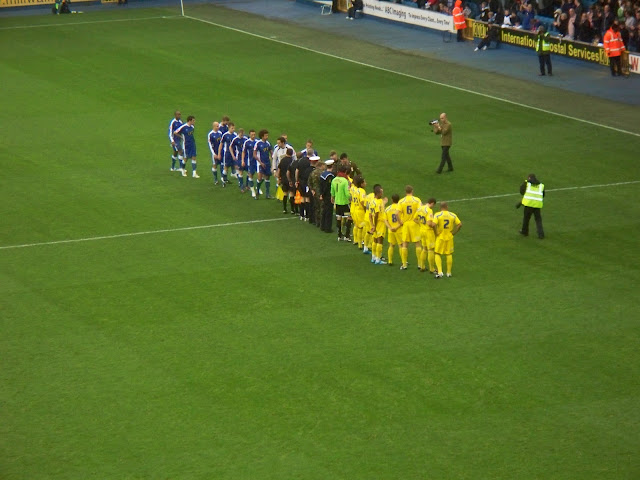 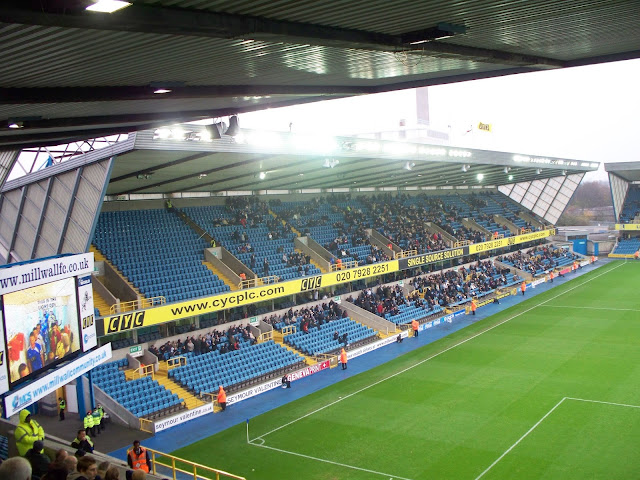 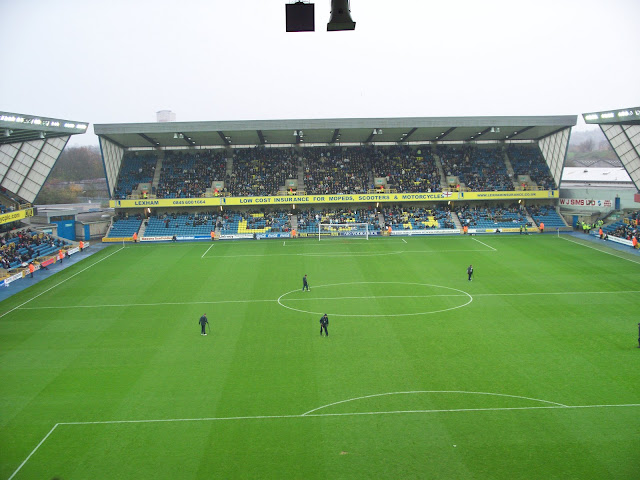 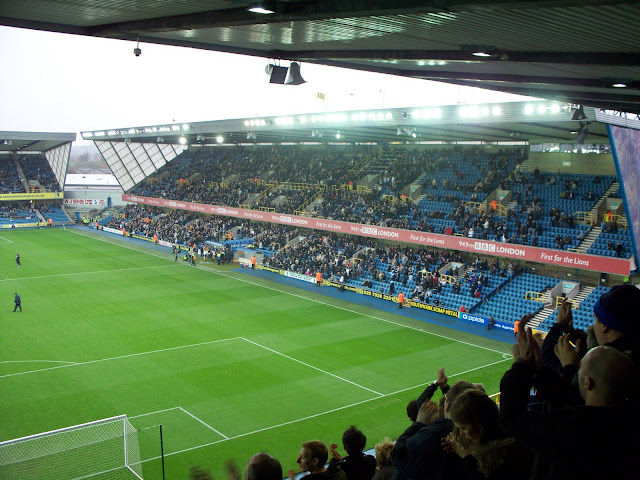