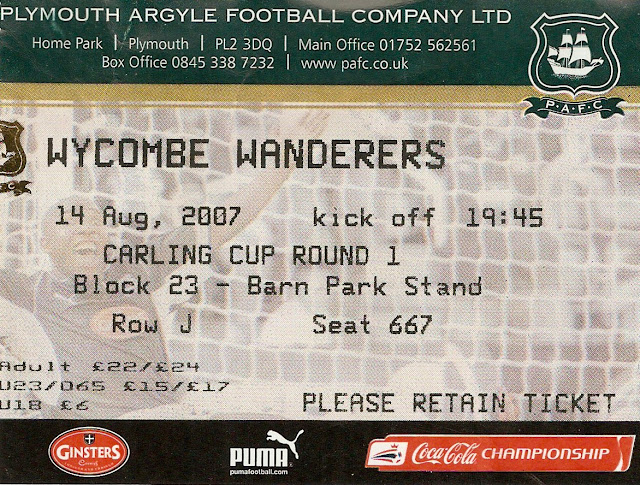 2:  The club joined the Football League in 1920, starting out in Division 3 South. They were runners-up six times in a row between 1922 and 1827, eventually winning the league and promotion in 1930. Their best league finish came in 1932 when they finished 4th in the second tier. Their worst finish came in 2012 and 2013, both seasons they finished 21st in League 2.

3:  Plymouth Argyle's best FA Cup run came during the 1983/84 season. They beat Southend United, Barking, Newport County, Darlington, West Bromwich Albion and Derby County before losing 1-0 to Watford in the semi-final at Aston Villa. The defeat to Non-League Stourbridge in the FA Cup 1st Round of 2011 will be less fondly remembered.

4:  The club has twice reached the League Cup semi-final - in 1965, losing to Leicester City and in 1974, losing to Manchester City.

5;  Home Park has been Plymouth Argyle's home since 1901. It was previously home of the Davenport Rugby Club from 1893 to 1898. Due to it's proximity to the town and naval base of Plymouth it suffered extensive bombing during World War 2. The oldest stand still present at the ground - The Mayflower Stand dates back to 1952 with the rest of the ground being completely rebuilt around 2001 and 2002.

7:  The club has had a few international players during their history. George Baker (for Wales in 1958) and Rory Fallon (for New Zealand in 2010) have played in the World Cup whilst at the club. Left-back Tony Capaldi was capped 21 times for Northern Ireland whilst at the club.

8:  Plymouth Argyle featured in an iconic TV advert for Aviva Insurance around 2009. Known for catchphrases such as 'Geddon You Janner', 'Green Army' and Ditmar Van Nostrilboy' it ran for around a year and gained many fans.

10:  The city of Plymouth has a population of 263,000. Plymouth Parkway are the city's next highest-ranked club and they play at level 9 of the English League system or step 5 of Non-League. Famous people from the city include Sir Francis Drake (the first person to circumnavigate the world), politician Michael Foot and Olympic diver Tom Daley. 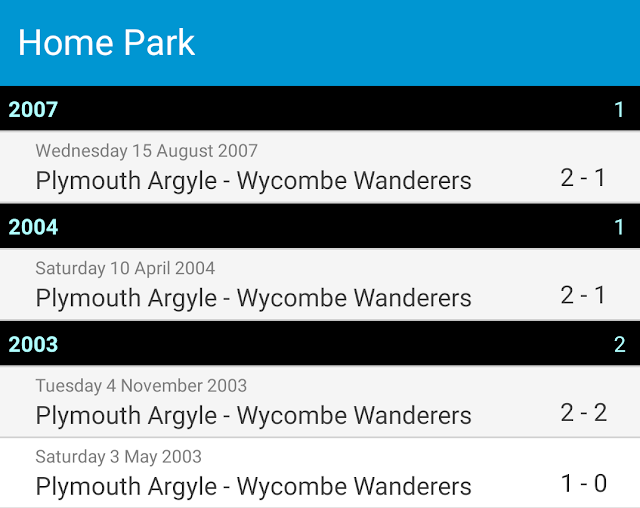 My trips to Home Park have not been the happiest with three defeats out of four. The first was just a minor disappointment as Wycombe played out the last of an eight-game winless run to end the season. We'd started to give some of the youth team a chance to play by then and so it was a youthful side that took to the field. Plymouth won 1-0 in a game of few chances thanks to a goal by Nathan Lowndes as the hosts finished the season in 8th and Wycombe in a safe but disappointing 18th. The lustre of Lawrie Sanchez's reign had long worn off by that point and following possibly too early criticism from fans due to them being spoilt with some good times in the first half of his reign, morale amongst the fans was at a low. Sanchez had not helped himself by responding to these barbs rather than rising above them and following a disappointing start to the following season and team morale at a low, he was sacked the following September. It was a real shame that his reign ended in such a fashion as we had some great times under him and it really should have ended in happier circumstances.

The second visit was by far the most enjoyable and memorable game. I travelled on the official supporters' coach as I always did around that time. This was for an evening game in the Football League Trophy which was actually a decent competition back in the day, rather than the utter shambles that it is now. We arrived at the usual time of around an hour until kick-off and I demolished a burger called 'The Gutbuster' which if I recall, cost a fiver and contained double burger, double bacon double sausage and cheese. Still hungry after that, I polished off a portion of chips from the same vendor before going into the ground. It was a top v bottom clash with Plymouth sitting pretty at the top of the table and the Chairboys struggling. Wycombe managed to get themselves into a two-goal lead after just 15 minutes thanks to Jermaine McSporran. This was caretaker boss John Gorman's last game in charge and typically with him in charge we were brilliant going forward but a little naive at the back. True to form, Wycombe had squandered their lead before half time - Graham Coughlan heading home from a corner on 22 minutes and Mickey Evans taking advantage of some slack marking to level the scores after 34 minutes. Plymouth had much the better of the game but Wycombe managed to hold on to take the game to extra time in an enthralling contest. Poor officiating from a linesman failing to spot an obvious offside in the last minute of extra time caused Guy Branston to get in a pickle and Wycombe were reduced to 10 men as he got his marching orders for foul and abusive language. John Gorman was also sent to the stands for confronting the referee but the extra time played out without too much incident with Andy Thomson coming on for Darren Currie to cover in defence following Branston's sending off.  The penalty shoot-out was one of the most dramatic I have seen, with three retaken kicks due to the keeper moving too early (two for Plymouth and one for Wycombe). Tony Capaldi needed three attempts to successfully convert for Argyle's last kick but Danny Senda kept his nerve to send Wycombe through 4-2 on spot-kicks. I'd been giving commentary to my mate Adam over the phone for the shoot-out, describing the referee in less than glowing terms. We didn't leave Plymouth until nearly 11 with us getting back home at 3.15 and me having to go straight to work. I was tired, but it was well worth it.

The third visit was undoubtedly the saddest occasion. Rather than be content with the good job that John Gorman was doing the Wycombe board were seduced by the celebrity status of Tony Adams. Though he did make some good signings, most notably club legend Matt Bloomfield, performances had been poor and some of the rants from Adams had been bizarre as he struggled to understand why Division 2 players were not as good as he was in his prime. Nevertheless, I wasn't going to give up until it was mathematically impossible to stay up. Again it was the official supporters' coach that got me there. Wycombe again had a bright start and took the lead through Nathan Tyson after five minutes to send the visiting faithful into dreamland. Tyson had a good chance to make it 2-0 on 29 minutes but it wasn't taken and it was inevitable when poor defending allowed Graham Coughlan to equalise after we failed to clear a succession of corners. Wycombe continued to play well and had a decent amount of chances to retake the lead. Plymouth eventually got a winner on 80 minutes when Mickey Evans headed home a loose ball which injured Wycombe keeper Steve Williams in the process. Midfielder Steve Bown had to go in goal for the rest of the game and Wycombe couldn't muster an equaliser. I shed a few tears as I finally realised the game was up but it was a shame we couldn't play as well as that more often under Tony Adams as we would have stayed up in that case. 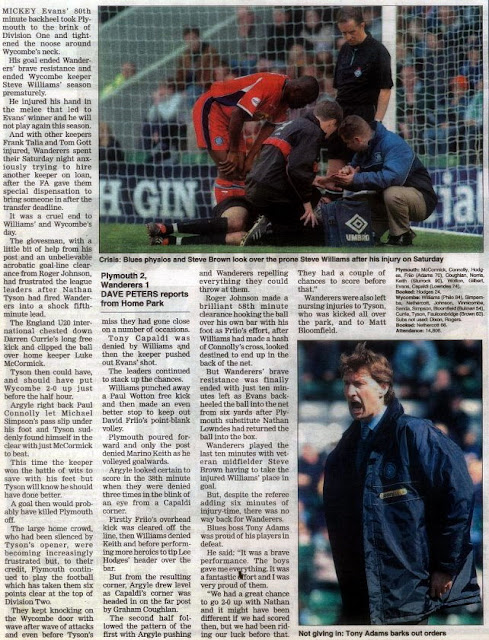 The fourth and last visit was recorded on my original blog 'Chairboys Forever' and is below:

Well, another game, another poor performance and inevitably another defeat. Wycombe were simply dire, only offering one shot on target, a deflected Stefan Oakes shot which mercifully for the 250 strong Wycombe following went in. We had 3 other shots, all of which went nowhere near on target. It’s not that I’m expecting us to beat Plymouth, who after all are a decent Championship side, even if they did play some of their reserves. But at least let’s have a go. Generally this season and the back end of last we have not been getting enough decent shots in or creating much attacking wise. Lambert says he wants to “win ugly” but what about when we are losing while barely mustering an attack. The total lack of willingness to help out those who try and create chances is concerning too. Several times Matt Bloomfield or Sergio Torres were trying to take on the whole Plymouth side by themselves as the other players were not supporting them by getting into positions from where they could receive the ball. It’s no the whole team that is the problem, indeed Matt Bloomfield had a very good game, but with so many new faces it’s bound to take some time for the new people to settle in. Dave McCracken and John Sutton look like they will need time adjusting to life in League 2. But all is not lost, let them get into the swing of things by coming on from the subs bench, not by sticking everyone in straight away. I’m convinced they will come good, no matter what anyone says, the SPL is a fairly decent level, probably akin to the lower half of the Championship or top half of League. So given time the new players will bed in and prove to be very good players for Wycombe Wanderers. And if the performances weren’t enough certain sections of the crowd decided to boo the team off the pitch. After a long awkward journey and a poor performance frustration sets in, but booing is counterproductive and only serves to make the problems worse, certainly this early on in the season. Come December if we are still in this position of being on a dire run of form then yes, questions need to be asked on whether the right decisions have been taken. And of course, there is the fans forum, next Thursday to put across some points of view, whether it be team-wise or what goes on elsewhere at the club behind the scenes. So Dagenham on Saturday, the return of Jermaine Easter which should spark some life back into the side. I sincerely hope that I have something more positive to write come Saturday evening.

HOME PARK has been redeveloped on 3 sides, in an all-seater semi-bowl. The one remaining stand, the Mayflower, is now all seated, though when I first went, the bottom tier was a terrace. It's a decent ground and one that still retains a bit of charm and character. The fans are generally a pretty decent bunch, at least they were whenever I visited. Not that you'd guess that from the club twitter or small amount of fans who enjoy a bit of sharp wit which sometimes comes across as bitterness online.

The food and drink at the ground is on a par with most other football league grounds. There's also a few vans within the vicinity of the ground. The nearest pub to the ground is The Britannia, a Wetherspoons which is around ten minutes brisk walk away but it can get quite packed. 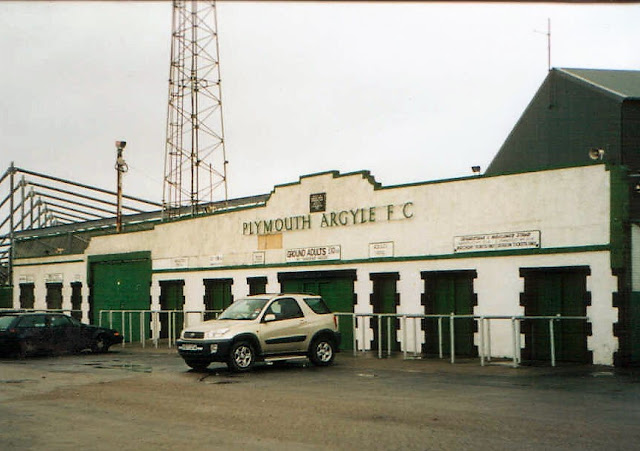 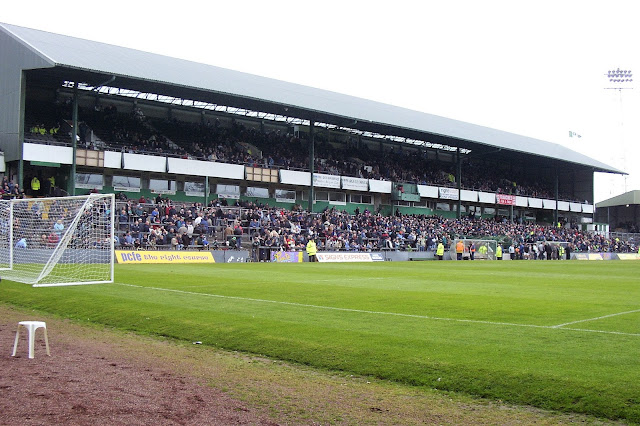 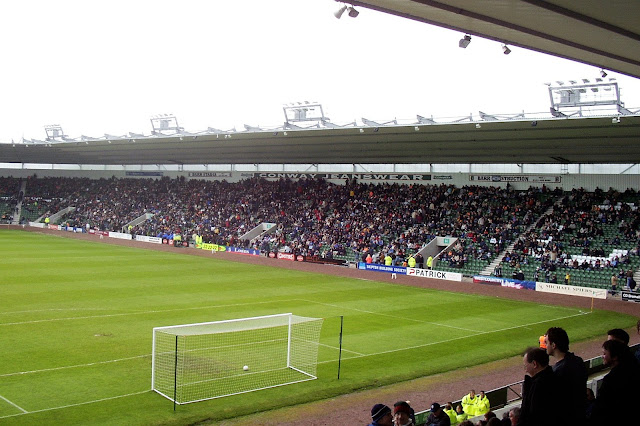 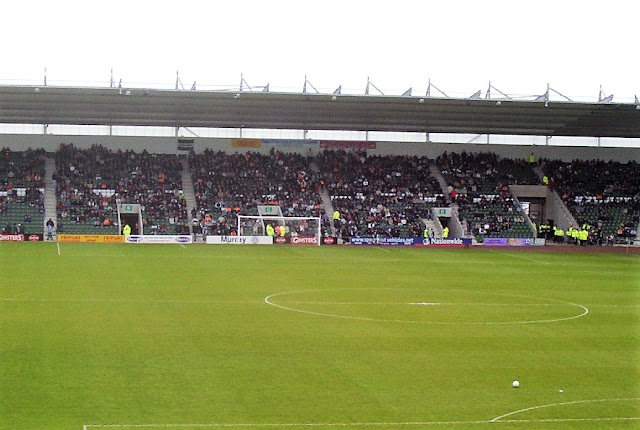