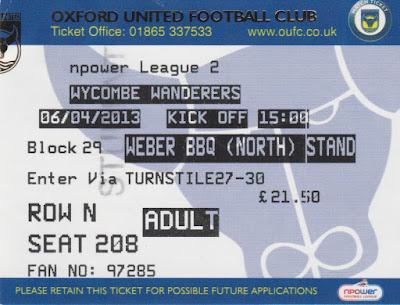 It was not a happy Oxford United that moved into their new stadium, having been relegated from the third tier of English football during their last season at The Manor Ground. Despite an 8th place finish in their first season of 2002/03 which saw them get within a point of the playoffs, things progressively got worse. So much so that by 2006 they were embroiled in a battle to avoid going out of the football league altogether. Former hero Jim Smith who had been at the club during the height of their success was brought in to arrest the slide but even he could not perform his magic as Oxford succumbed to a final day defeat at home to Leyton Orient to find themselves back in non league football for the first time in 44 years.

Four seasons in total were spent in the Conference with 2010 seeing their return to the league as they beat York City in the playoff final. Since making it back things have improved with top half finishes in all but one season. Things are looking good for a return to the third tier for the first time since 2001 on the eve of my 7th visit with them in prime position for an automatic promotion place.

In the cups they've not quite matched their former glories though an impressive run to the 4th Round of the FA Cup saw them beat Premiership side Swansea City before succumbing to Blackburn Rovers. On the flip side they will want to forget the 2007/08 FA Trophy campaign where they lost in a replay to Ryman League side Tonbridge Angels.

I know plenty of great Oxford fans, including fellow groundhopper Laurence whose blog you can find HERE. They have plenty of celebrity fans too, including 1980's kids TV hero Timmy Mallet whose son Billy I am friends with. Other famous names to support the club include Tim Henman, Jim Rosenthal and Richard Branson. 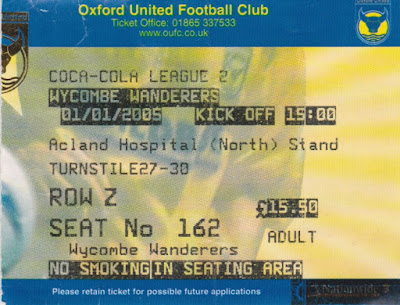 VISIT 1: OXFORD UTD 2-1 WYCOMBE (L2 01/01/05)
My first visit to Minchery Farm came on New Years Day 2005. Travelling on the official supporters coach I watched as Wycombe fell to defeat in miserable weather conditions. Jamie Brooks gave Oxford the lead but Wycombe were given an advantage when future Chairboy Chris Hackett was sent off for lashing out at on loan defender Tony Craig. Despite this Wycombe failed to capitalise and Steve Basham extended Oxford's lead five minutes from time with a deflected free kick. Wycombe then started to play and got back into it with a last minute penalty by Danny Senda. We had the ball in the net again, thinking we had equalised, but Craig Faulconbridge's goal was ruled out for pushing. 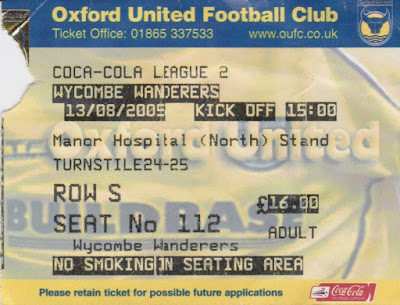 VISIT 2: OXFORD UTD 2-2 WYCOMBE (L2 13/08/05)
It was a rainy afternoon in Oxford that saw Wycombe draw 2-2 to continue their early season unbeaten run. Chris Hackett was again involved as he gave Oxford the lead on 17 minutes. A Nathan Tyson double put Wycombe in the lead but Oxford equalised on 88 minutes thanks to poor defending by Wycombe. It was Danny Morgan who took the credit but in truth the Wycombe defending was that poor, anyone could have scored it. 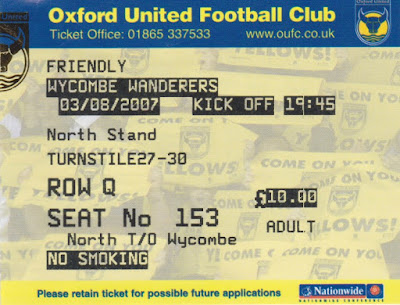 And so to Wycombe's last preseason friendly, at rivals (and now Non League) Oxford United. A trip over to the 3 sided Kassam stadium which recently provided a home for those stricken by the recent flooding in the Oxford area.There wasn't much flooding of football though, this being a typical pre season game, albeit with a few niggly tackles. Sergio Torres again the undoubted star, with a wonder goal - taking the ball past 4 players before placing it past a bamboozled Billy Turley in the Oxford goal.Oxford replied through Rob Duffy after a cross caused confusion in the Wycombe box, but that was about it really in terms of real chances. Paul Lambert has a fair bit of work to do before next weeks opening league game against Accrington Stanley if this performance is anything to go by 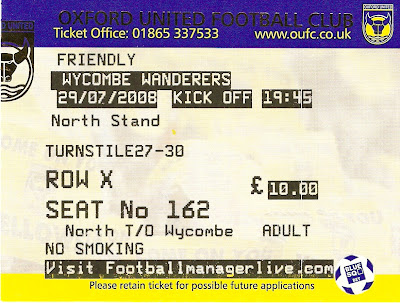 There were 2 Wycombe friendlies on this evening. The one I would have gone to if I had the choice would have been the game at one of my favourite grounds as a youth and reserve XI played out an entertaining 3-3 draw at Hayes & Yeading. However, I was persuaded by mates to drive to Oxford for a friendly for the second consecutive season. There we played out a dull 1-1 draw with Magno Silva Viera equalising Jamie Guy's goal for the home side. 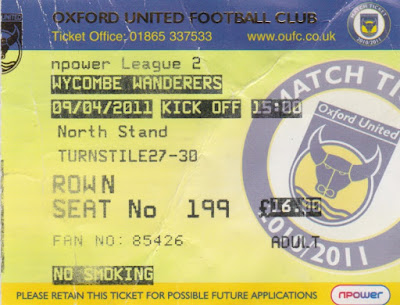 I travelled to Oxford as Wycombe were looking to gain automatic promotion under Gary Waddock, a feat that they would eventually complete at the end of the season. I can't remember how I got there but looking back at the limited number of Facebook posts I made, this was the first time I discovered how good the Priory Pub used to be as I enjoyed a couple of pints of Farmhouse Scrumpy pre-match.
On the field, Wycombe played out an entertaining draw against mid-table Oxford United. Alifie Potter gave the U's the lead on 34 minutes. Wycombe wewnt further behind following an own goal from Dave Winfield and it looked as good as over for us. However 2 late goals from future Oxford players Scott Rendell & Jon-Paul Pittman made it all square to the delight of the 1800 strong Wycombe support. Both sides could have won it, but in the end it ended a draw, a result that was probably enjoyed more by the visitors. 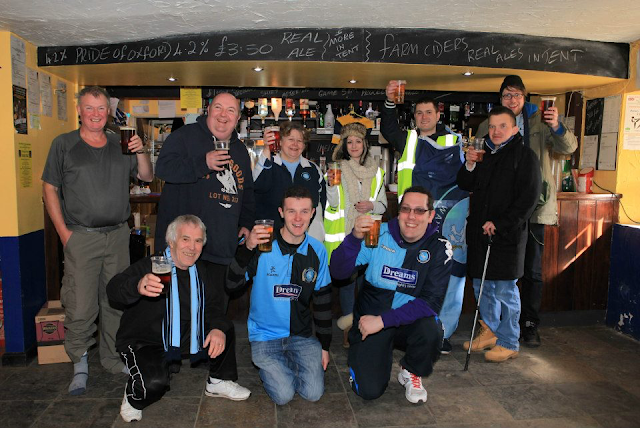 This must be one of the few games that I have walked to and was a result of some foolhardy bravado when I was at Bottesford Town with my Grimsby supporting mate William. A group of fans were walking to Oxford from Adams Park, a distance of over 20 miles and I put my name down like a shot without thinking about the practical side of it. It was to raise funds for the supporters trust - over £4000 was garnered in the end.

The first part of it was OK, starting at midnight at our home and seen off by manager Gareth Ainsworth. The first 15 or so miles oif the journey went fine with me trying to keep pace with the guys at the front, perhaps that was my downfall rather than pacing myself. I struggled the last 5 miles of the journey as my logs started to seize up, I felt sick and had blisters all over my feet, but at least I made it to the finish line, albeit very sore.

We got there at around 9.30 and I was glad half an hour later when the pub opened and I could have a lot of my favourite Gwynt-y-Ddraig cider. Though that eased the pain a bit, my legs were still very tight and I hobbled around until it was time to get the coach back after the game. I got home and crashed out on my bed, falling asleep at 7PM. At least I was rewarded with my first Wycombe win at the Kassam with Joel Grant getting the winner in a dull game. 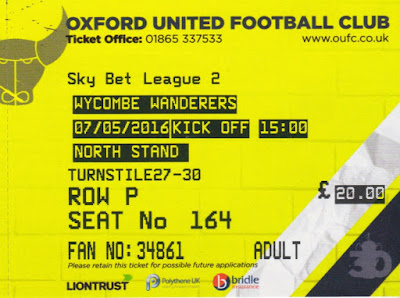 I'd not been to Oxford for a while, and needed to update this blog, so when my parents offered to treat me to a day out for the last game of the season, I jumped at the chance.As time wore on though, I was growing less and less enthusiastic - it was hardly the most inspiring of venues and Wycombe had been in poor form prior to the game. Had I bought the ticket myself, I'd have probably sold it on and cancelled my place on the coach.However it was a free day out, and our coach was stopping off for a pub lunch in a little village along the way, so I decided to make the most of it and enjoy it as much as I could. 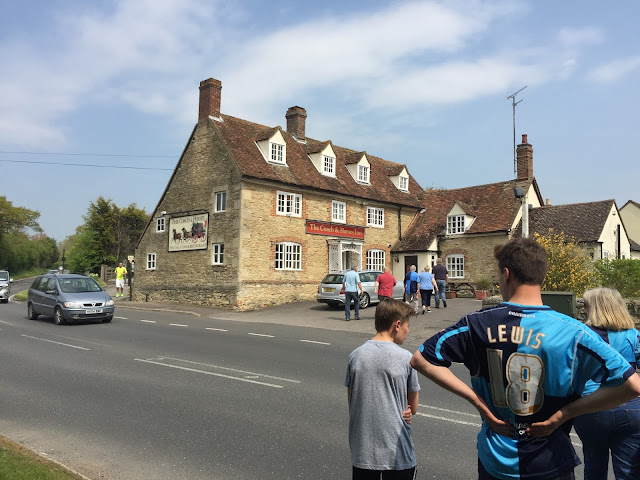 I woke on the day of the game with a stinking cold and not a lot of enthusiasm for the game. I tried to cheer myself up with a breakfast of sausage and black pudding and that perked me up for a bit. After having a shower I did some work on my blog before going down the post office to send something I'd sold on eBay. I got the coach from near my house with my parents at 11.15 and we made our way past the various pick up points, meeting my brother at the cinema on the last pickup. 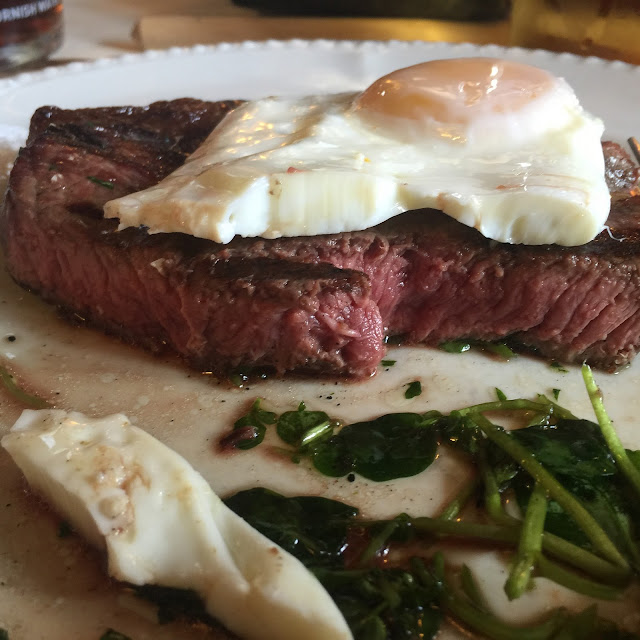 We got to the Coach and Horses in Stadhampton at 12.15. Initially there was disappointment that there was no real ciders and I had to make do with Stowford Press. Things improved with the steak which was excellent and as the drink flowed resentment towards certain individuals in the club came out amongst the gathered crowd. A few drinks later and we were off to the ground, arriving at 2.10 and going straight in. 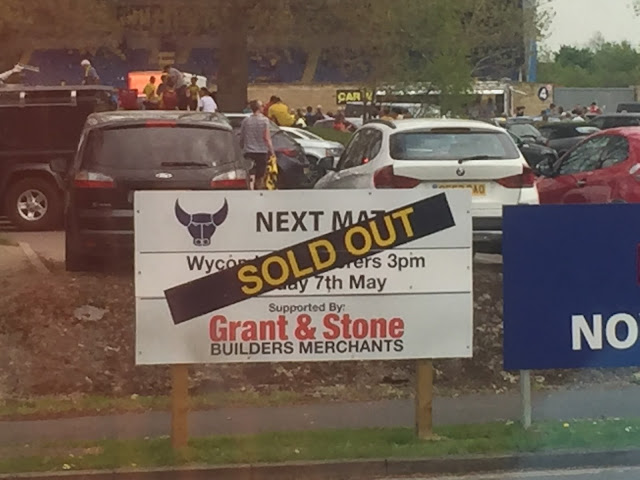 The atmosphere was decent with both set of supporters backing their teams well. There was even Wycombe support in the Oxford end via my Tranmere supporting mate Connor. The game was all Oxford but at least we held them off until around the hour mark when they took the lead as Cheyenne Dunkley headed in from a corner. They made it 2-0 with a penalty on 75 minutes and at that point I don't think we'd even had a shot on target. Oxford wrapped it up against a laughing stock attacking wise when Callum O'Dowda as the selfish referee prolonged the misery with 5 minutes of injury time. I was glad to get out in the end and so glad that after our dismal end to the season that it was all over. 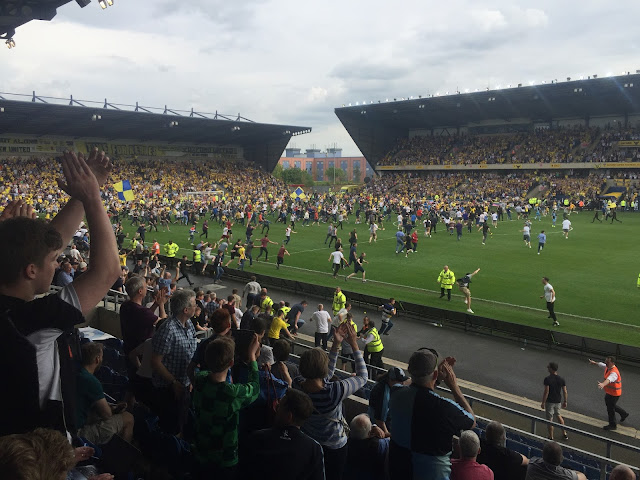 MINCHERY FARM is a decent step up from the club's previous home at The Manor, though it certainly lacks the former ground's character. It's best described as functional - excellent sightlines and legroom but not a great deal of personality. The ground is 3 sided with the 4th side being a fence. It has been mooted that a 4th stand will be installed there when needs and finances dictate.

It's not in the best area either, right in the middle of a leisure park full of bland chains and right next to the notoriously rough Blackbird Leys housing estate. There used to be a cracking pub called The Priory. This did all kinds of ales and some great Welsh cider. Now you are stuck with bowling alley and cinema bars, but there is at least a decent selection of places around the ground, so you could be a lot worse off. 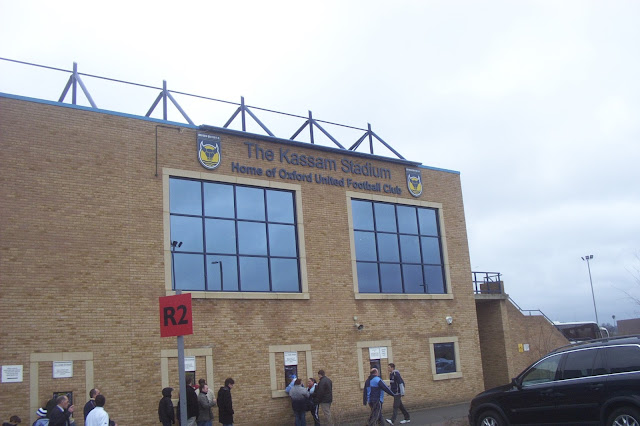 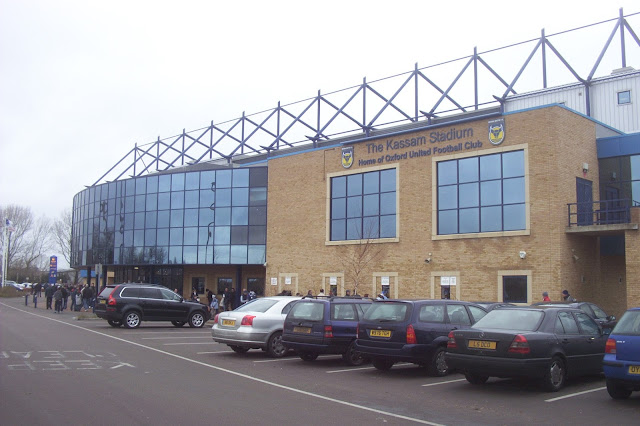 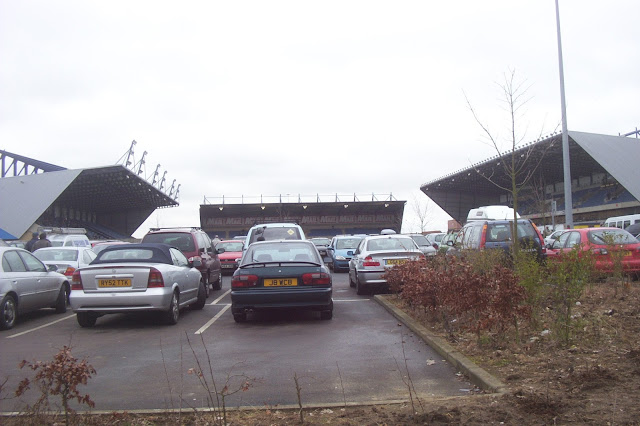 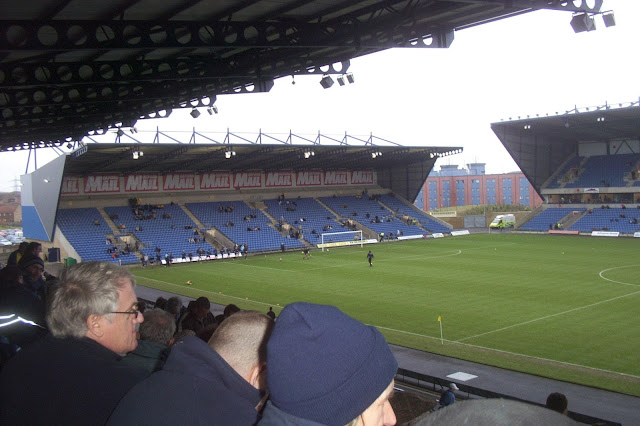 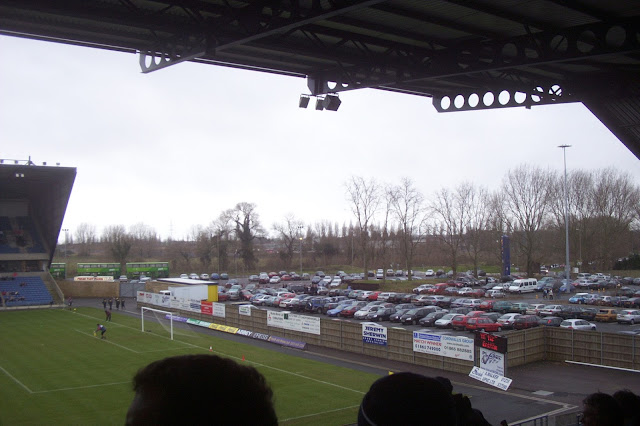 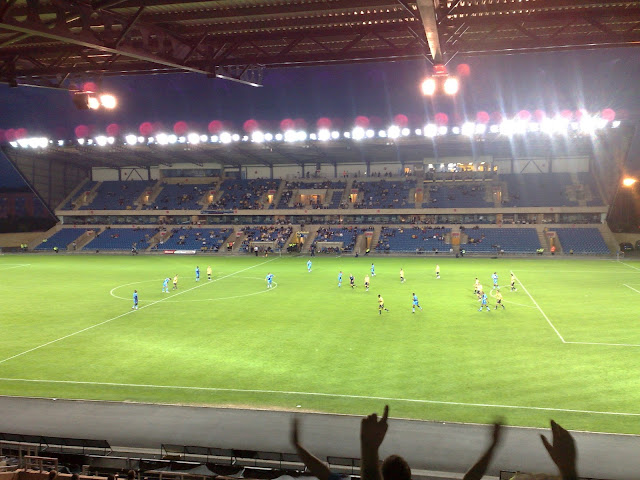 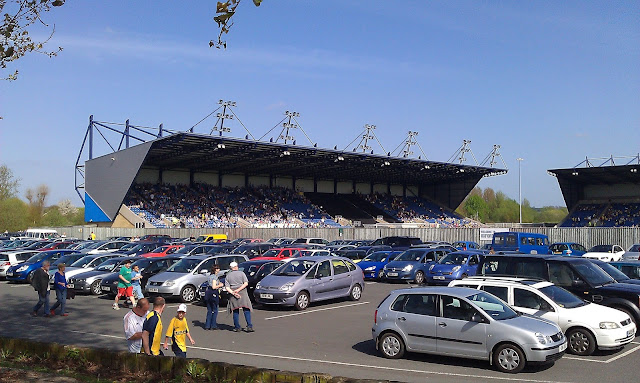 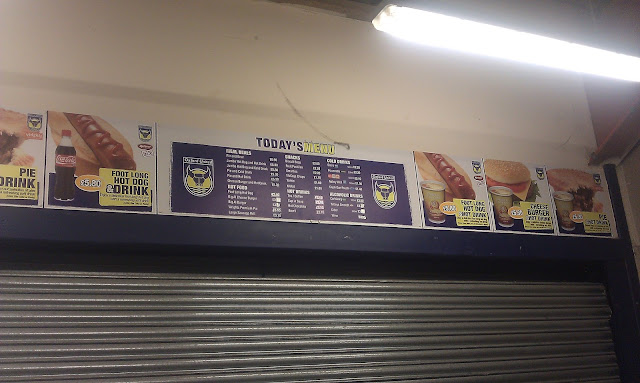