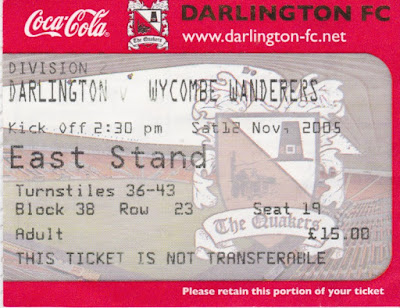 
10 FACTS ABOUT DARLINGTON AT THE ARENA

1:  Darlington Arena opened in 2003. The first game at the new stadium was a 2-0 defeat to Kidderminster Harriers in what was then Division 3. It attracted one of the largest attendances at the stadium when 11,600 turned up.

2: In 2008 the stadium saw its biggest ever attendance. However it was not for a football match as 17,000 turned up for an Elton John concert - the only music event to be held at the stadium.

3:  Initially known as The Reynolds Arena named after the egotistical chairman, it was changed to 'The New Stadium' in 2004. The convicted safecracker faced charges of money laundering which nearly brought the club to its knees. Only hard work from the fans and a benefit match saved them from closure. Later on sponsorship deals from Williamson Motors, TFM, Balfour Webnet and The Northern Echo saw it be known under various guises.

4:  Darlington's best ever league placing whilst at the Arena came in the 2007/08 season when they finished in 6th place in League 2

5:  The Quakers did not get past the 2nd Round of the FA Cup during their time at the Arena, losing to Hornchurch and Droylsden during their short stay

6:  Similarly the League Cup bought little success with only the 2nd Round being reached on 3 occasions.

7:  The FA Trophy was a much happier hunting ground. In 2011 they won the competition. A 2 legged semi-final against local rivals Gateshead saw them progress to the final at Wembley where they defeated Mansfield Town 1-0.

8:  The Football League Trophy also saw decent progress with Darlo reaching the Northern semi final twice. However defeats to Doncaster Rovers in 2007 and Rotherham United in 2009 saw them thwarted a couple of games away from the final at Wembley.

9:  The last game played at the Arena came on 28th April 2012. The result was a good one for the hosts as they beat Kettering Town 3-1 - one of the few bright spots in a horrible season.

10: Predictably The Arena sounded the death knell for Darlington FC. Running costs of £10,000 a week crippled them and they went bust in 2012. A reformed club - Darlington 1883 started up in the Northern League. Initially playing in the Northern League at Bishop Auckland, multiple promotions have seen them promoted to the Conference North. Now back home at Blackwell Meadows in their home town, they start next season just 1 level below where the old club finished. 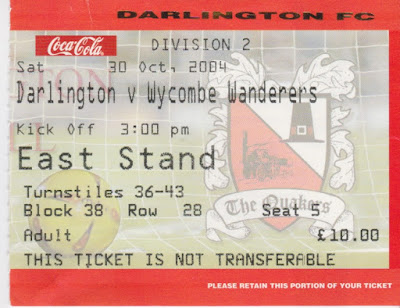 My first 3 visits failed to provide a victory for Wycombe, with me making a combination of coach journeys on the official supporters coach and on one occasion driving up and staying overnight in South Shields for the weekend. It was the car trip that provided my most memorable non-football memory. I'd gone with my mates Paul, Matt & Andy and we had got to the ground around 11.30 with the intention to park up and walk or get the bus into town. We were walking down the road when we spotted the bus coming, and started to run for it. Amusingly this happened at the same time as some youngsters yelled 'YOU FAT BASTARD!!' out the window at Paul who is a rotund and fairly aggressive looking chap with his bald shaved head and beer gut.

In reality, he is as nice as pie and rarely resorts to violence, but the youngsters were not to know that as they issued a grovelling apology to us, and we all had a laugh about it in the end. I enjoyed Darlington as a town, one of my favourites in fact and the fans were always friendly. It was just a shame that Facebook happened too late to include a visit here as I have got to know a few decent Darlington fans on the social network.

As for football, I like goals, so the highlight was probably the last one in April 2007. That's not saying much though, as the club were in pretty poor shape at the time. We came into the game in a dreadful run of form and though there was no upturn in the result, we did at least give a battling performance. Darlo were third in the league at the time and despite this would fall away and fail in the playoffs. Wycombe would go on to cling to their playoff place but would lose to Stockport County in the playoff semis. Two goals from Wainwright and one from Rowson were enough to beat Wycombe who replied through Bloomfield and Easter. 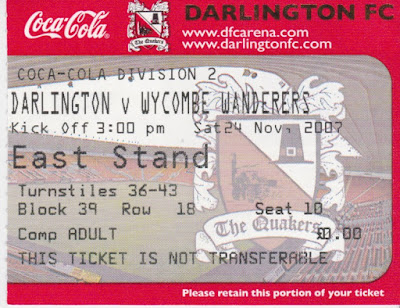 On a cold afternoon Wycombe lost to 1-0 at Darlington to continue their winless run away to the Quakers. The performance wasn't bad, but Darlington shaded the game as you would expect from a team who have been up at the top end of the table all season.

Maybe if we got in a new striker to help McGleish we would have got more from the game - Reid appeared uninterested and Sutton still hasn't recaptured the form that saw him lead the top scorers chart at St Mirren.

Frank Fielding was the undoubted man of the match for Wycombe, saving a penalty and making several other good stops. Sergio was unlucky in hitting a post, but could have seen himself red carded for an elbowing incident in the first half.

As well as a group of drunken students chanting random rubbish during the game, there were also chants of "Lambert Out" near the end, despite Wycombe putting in a reasonable performance in a tough game. I'm not naive enough to believe that everything at Wycombe, or Paul Lambert is perfect. But it will cost us a years wages as Lambert is on a 12 month rolling contract, plus the fact that if you look at our league position it isn't that bad. I think we could be a lot more positive at times in terms of attacking play, but it doesn't help when we only have 1 striker who has done well enough to merit a place in the first team all season. Hopefully someone will come in during the January "Transfer Window" to push us towards promotion as I think that's all we need to make the difference. 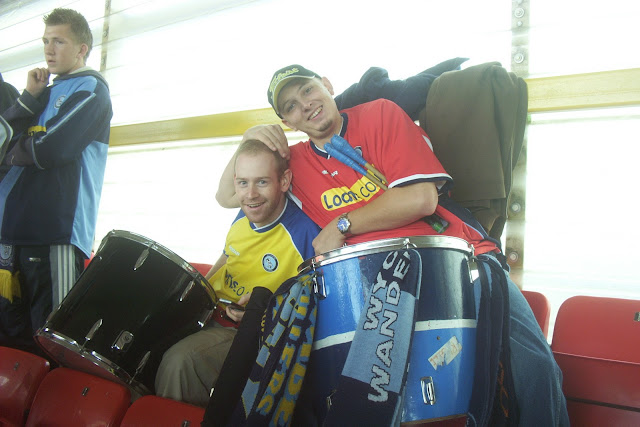 
THE DARLINGTON ARENA would have been a great stadium for most Championship or even some Premiership clubs but for a League 2 club whose attendances hovered around the 2000 mark, it was plain daft. The brainchild of an egotistical chairman, it offered superb facilities and a great view, bit all at a cost the club could not afford. Its location did not help in attracting fans, over a mile from the town centre and with very little around it. The car park charge of £5 discouraged car users too.

Offering seating for 25,000 in all, it was way too big and could never be fulfilled to its full potential as local planning regulations restricted its use to a 10,000 capacity. You obviously had plenty of seats to choose from and leg room and views were great, but it was a surreal atmosphere. In the corner was a belting sound system and a big screen which showed highlights from the game. The bar at the stadium was a decent sports bar with reasonable prices from what I can remember, and it had plenty of memorabilia and pennants from other clubs. 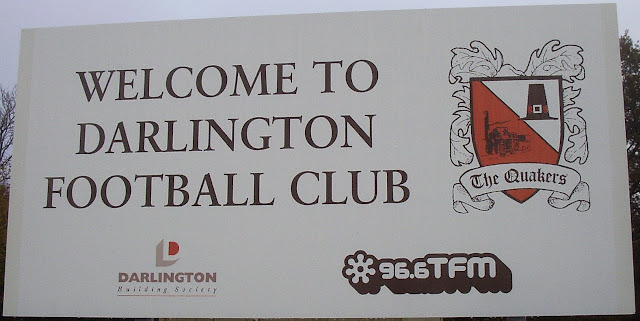 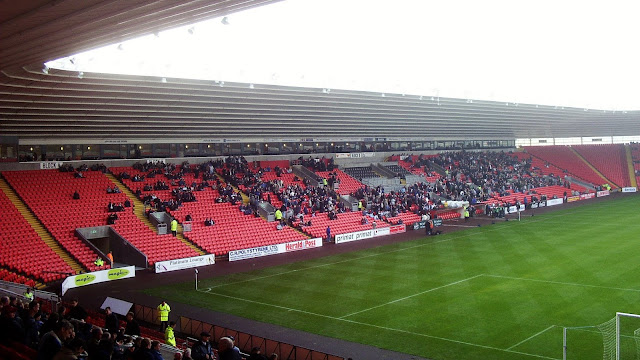 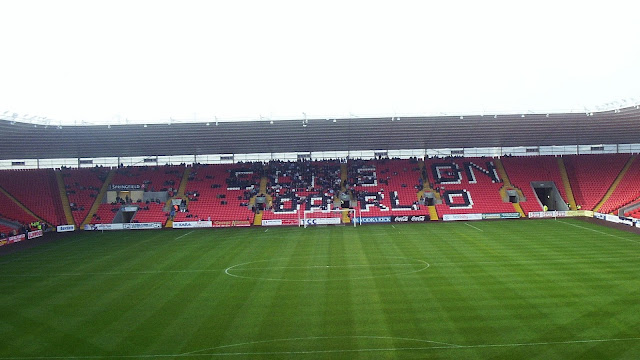 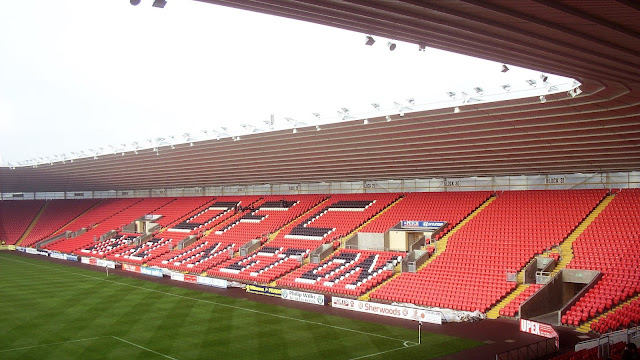