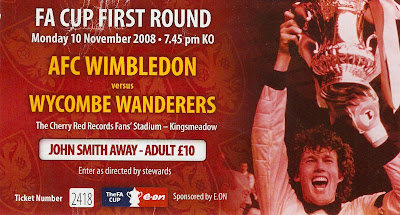 
After my second home Adams Park, Kingsmeadow is my second most visited ground with 29 visits so far at the time of the blog. My first visit to what was Kingstonian's ground came in July 1998, as Wycombe played a pre season friendly there. My dad, my brother and I made our way over there but were left disappointed as Kingstonian outplayed us and won 2-0. It would be another 5 years until I visited again, but due to my friend Paul, who at the time was an AFC Wimbledon fan, it became a regular haunt. This was when I was mad for football alone, and although I enjoyed it, I can't help but wonder what I missed out on by not seriously starting hopping until around 2012. 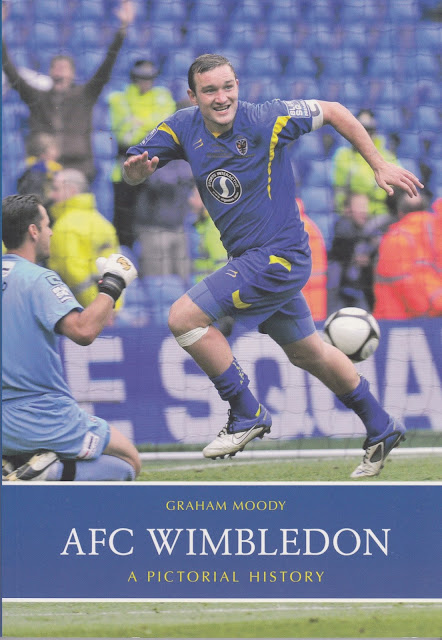 The club founded by it's own supporters came into being for the 2002/03 season. This was following the disgraceful act that happened on the 28th of May 2002, which totally went against the spirit of football. This was when a 3 man panel of the Isthmian League's Alan Turvey, Aston Villa's Steve Stride and media lawyer Raj Parker (why?!) were set up by the FA to decide whether the original Wimbledon FC could move 60 miles north to Milton Keynes, which was strongly opposed by the recently formed Dons Supporters Trust. It was not the first time the supporters had to fight off relocation plans either. Back in the 1980's the then owner Ron Noades had wanted to move to Milton Keynes, while in the 1990's a move to Dublin was blocked. It was thought that this would be the case on this occasion, but sadly the FA panel ruled 2-1 in favour of businessmen Charles Koppel and Pete Winkleman's twisted plans. 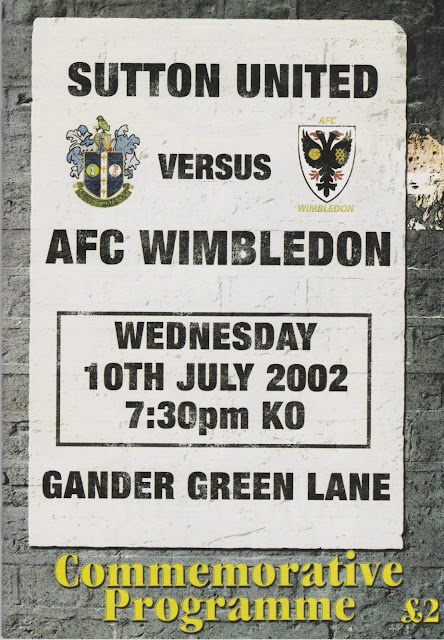 With their fate decided, Wimbledon supporters set about rescuing something from the ashes of their club. An emergency meeting was held and it was decided that they would set up a new club, run by the fans, for the fans. Bizarrely the warped minds at the FA's commission stated that the new club was 'not in the wider interests of football' but undeterred the club formation went ahead anyway. The new club had hoped to start in this Isthmian League, but despite 87% of the clubs in the league being in favour, it was still short of the 95% required to get them in. Not ones to rest on their laurels the application to the Combined Counties League was a success. Next they needed players, and a select group of players from the 300 that turned up on Wimbledon Common for trials in the summer formed the new side. Their first game was on the 10th of July 2002, when 4652 fans crammed into Sutton United's Gander Green Lane home to see them lose 4-0. The rest of pre season went the same results wise, though they did win the Supporters Direct Cup by winning 3-2 against Enfield Town. 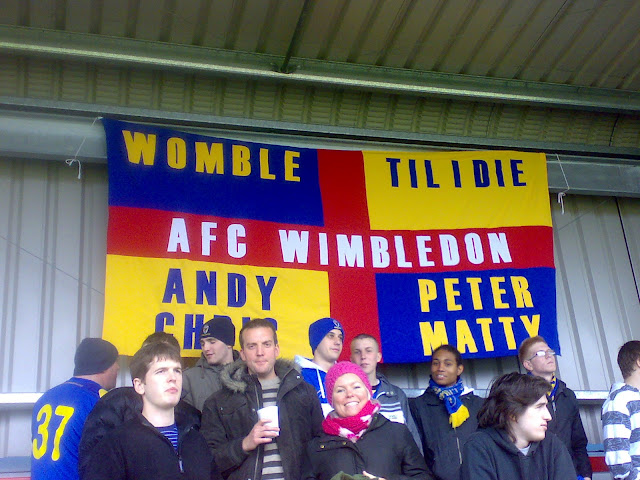 The first 2 seasons of their history were spent in the Combined Counties Premier Division. Despite amassing 111 points the club could only finish in 3rd place behind AFC Wallingford and Withdean 2000. My first experience of watching the newly formed Wombles was on the 1st of December 2002. At Hayes' wonderful old Church Road ground, AFC Wimbledon beat Viking Greenford 4-0. Visiting fans might have taken the mick out of the balding 38 year old Wayne Hailey who stared for Viking Greenford, but in reality he was the best player on the park. I would also see my first ever AFC Wimbledon home game the following March as they beat Ash United 5-3. The following season was when the bulk of my visits to Kingsmeadow were made and it was also the season that AFC Wimbledon would go on to lift the title and advance to the Isthmian D1 South. It was to be a double that season as I also saw them lift the CCL Challenge Cup as they defeated North Greenford United 4-1 in a game played at Woking's Kingfield Stadium. In a league where double figure crowds were the norm, the Wombles showed phenomenal support, averaging around 2500 fans per game. 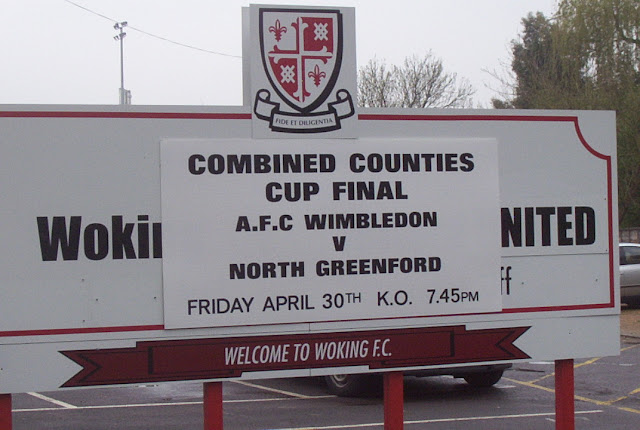 Though I went less and less, owing to them changing their midweek night from Tuesday to Wednesdays, the rise up the leagues continued. The Isthmian D1 South was one at the first attempt before they spent a few seasons in the Isthmian Premier. It was third time lucky in  2007/08 as they finished 3rd behind Chelmsford City & Staines Town. Victory over Staines Town in the playoff final was enough to see them elevated to the Conference South, which saw them go up as champions in their first season. After finishing 8th in their first season in the Conference Premier, they went up in the playoffs beating Luton Town in the 2011 final played at Manchester City's Etihad Stadium. Since then they have remained in League 2, with their best ever finish of 15th coming last season. 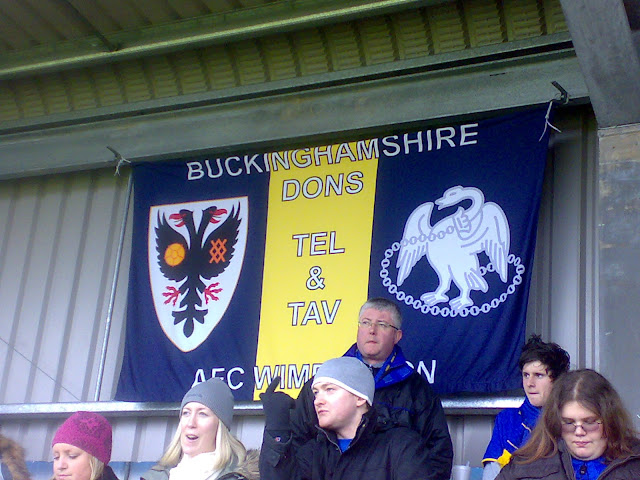 Last season also saw their record FA Cup progress. Wycombe have had a poor record against the Dons since they joined the Football League and this continued as they beat us on our own patch 1-0 in the second round. They would go on to play Liverpool in a huge 3rd Round Cup tie, eventually losing 2-1. They have lost every single cup tie, including a 2014 defeat to the hated MK Dons. The best run in the FA Trophy came in 2007/08 when they reached the 3rd Round before losing to Torquay United, whilst their sole season in the FA Vase saw a defeat to Colne in the 4th Round. As well as a couple of appearances in the Football League Trophy Southern Area Quarter Final, a number of smaller ups have been won including the London Senior Cup in 2014.

MY VISITS TO KINGSMEADOW 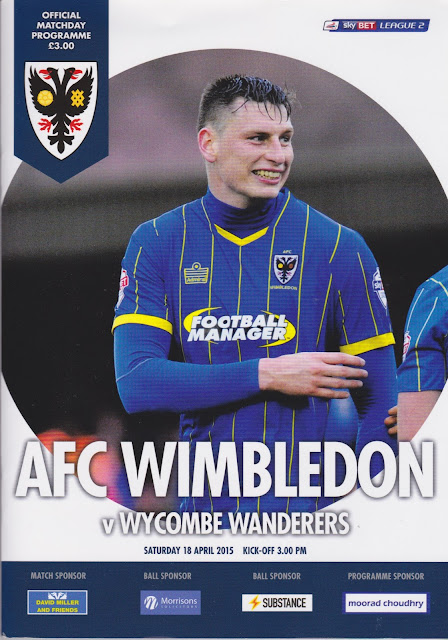 Of the visits to Kingsmeadow, there have been plenty of goals in the main, though there have been a few blanks. My personal highlight came in 2008 as Wycombe won 4-1 in an FA Cup 1st Round tie, with Matt Harrold scoring a hat trick, while the game where AFC Wimbledon beat Walton Casuals 5-4 in November 2003 was great viewing. 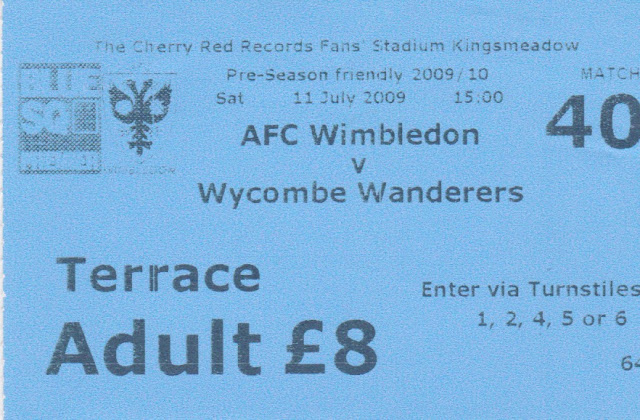 On the flip side Wycombe have had a terrible record against the Dons since we became League rivals with dire displays at Adams Park. Showings at Kingsmeadow have not been much better with the 2-2 draw in January 2013 being the pick. September 2009 saw the second of three goalless draws, this time in the Conference against Cambridge United. Officialdom had taken over the place then, as I'd bought a few cans or Irn Bru into the ground. Not that that bothered the humourless East European female steward who fished them out of my bag before tossing them in the nearest wheelie bin before grunting 'not allowed' at me. Appalling manners as well as flagrant breach of recycling rules! 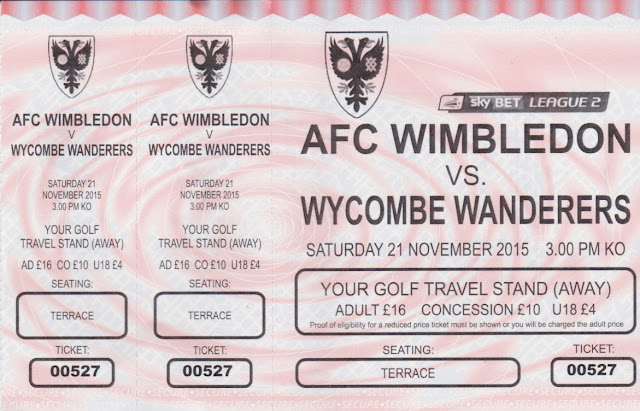 Ans so to my main blog entry in terms of a summary of a day out. I was always likely to make this trip given that I had written for the AFC Wimbledon programme for the 5th time in a row. However, having been to this venue 28 times already, I was willing to listen to suggestions from fellow hopper Anwar as to an alternative game. When on the Thursday he told me he would be watching his local side Aylesbury to save money, I went down to the ground and got my ticket. This also meant that I'd really go to town on updating this blog, having got more and more detailed in my jottings over the years that I had been groundhopping. 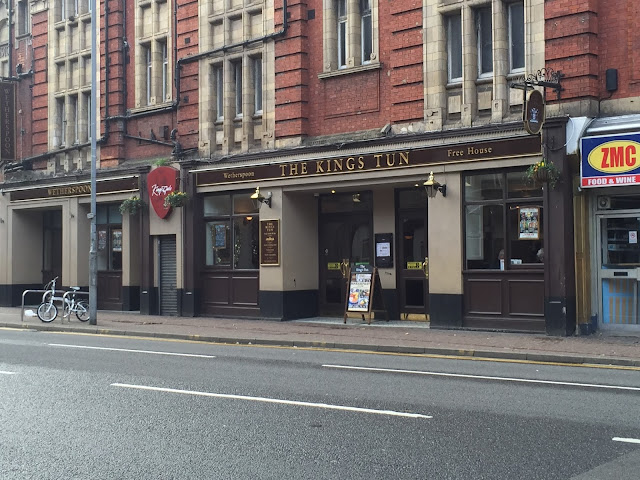 On the Thursday night before the game I had a few drinks with the Maidenhead v Port Vale game, where the league side snuck through to the next round. As a result I had a sober and quiet one Friday, and got to sleep around 10am. As a result I was up early at 6am on the Saturday morning. I made the strange choice of Lamb Rogan Josh for breakfast, it was going to be that kind of day. After having a bath and popping down the post office I left for Amersham train station, getting there at 9.45. 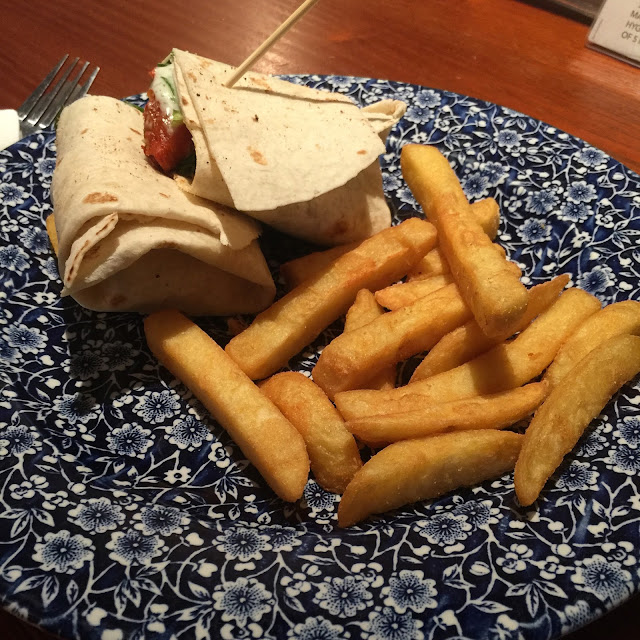 From there I made my way to Kingston, going to the local Wetherspoons which was imaginatively titled 'The Kings Tun'. It was a pretty bang average 'spoons with only one real cider on offer which was Marcle Hill, and sadly not my favourite Black Dragon which was advertised on the bar. It was only £2.20 with my CAMRA voucherthough, so I couldn't complain. Nor could I at the Tandoori Wrap with chips and a pint of Thatchers Gold for just £4.49, you'll be hard pushed to beat Wetherspoons for value, and if you know what you are doing the food is good. 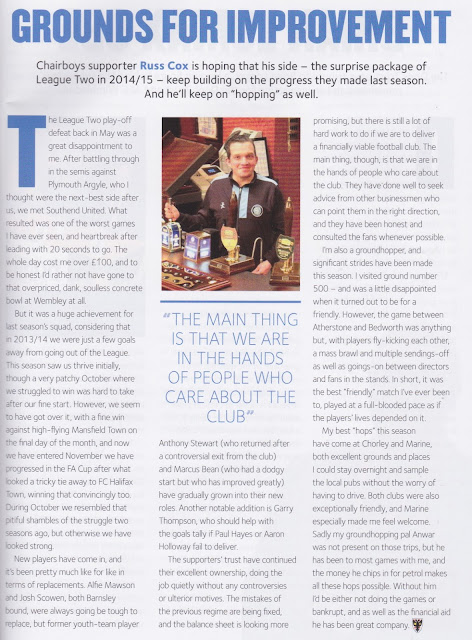 It was 12.45 by then, and so I made my way to the ground as being a shortarse I wanted to pick a good spot to watch the game from. It was a mile to the  ground, so I still had plenty of time to spare. I picked up a copy of the programme with my article in and went in the bar to catch up with some Wimbledon supporting mates. I then bought a matchday badge for £3, going in at 2pm and killing time before kickoff by chatting on Facebook. The game doesn't deserve much of a match report, a real war of attrition and not great to watch. It looked like Jason McCarthy's first goal had won it for Wycombe but our former loanee Ade Azeez popped up with a last minute equaliser in a game of very few chances and little quality. 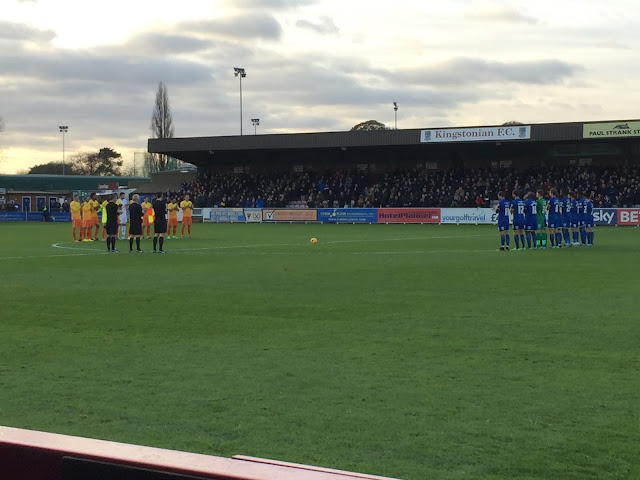 After the game I walked to another Wetherspoons in New Malden, around 1.5 miles walk away. It was well worth it, I had a hot jug of mulled cider, which was very nice and only 4%. From there I went and had a look round London, mainly Harrods, hoping to pick up something nice to have with Match of the Day later. They turned out to be hopeless, not one cider in stock but it was nice to have a quick look round. I then made my way back to Amersham, picking up a couple of bottles of my favourite Welsh cider at the newly opened brewery shop in the town. I went home and had these with the football, going to sleep around midnight. 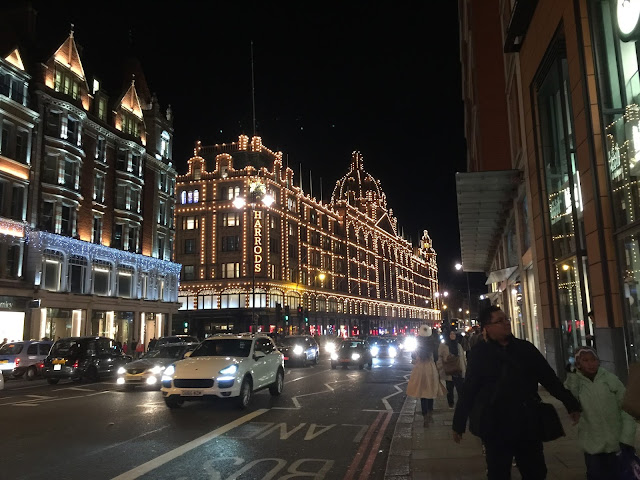 KINGSMEADOW is an excellent ground for the Conference South. Once you get above that. it's 4720 capacity starts to get a bit restrictive. At least the facilities at the ground, with a reasonable tea bar and clubhouse. Each club has it's own club shop, whilst there are plenty of takeaways and pubs nearby if you fancy more choice. 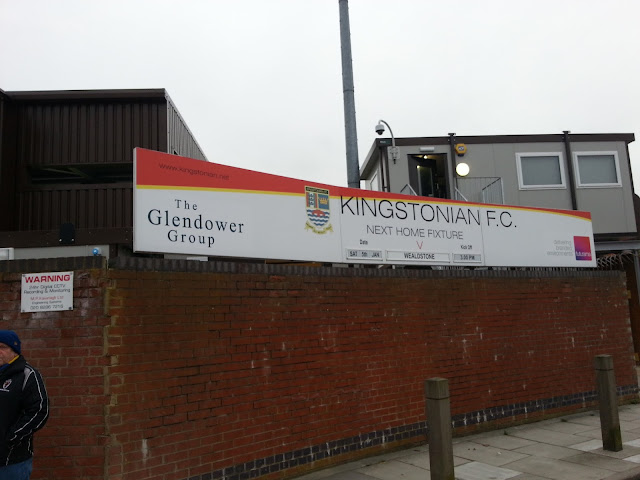 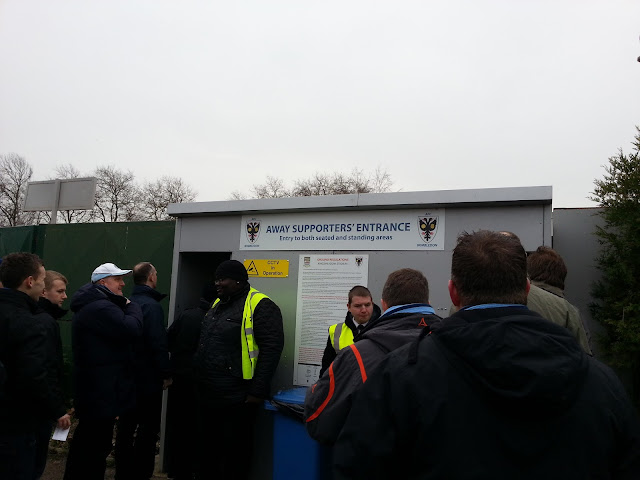 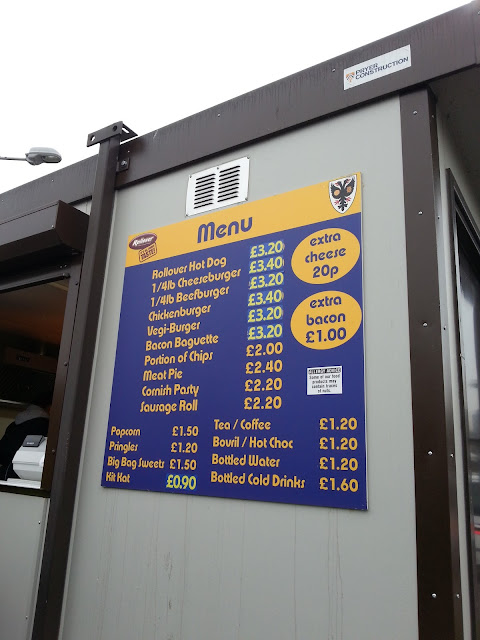 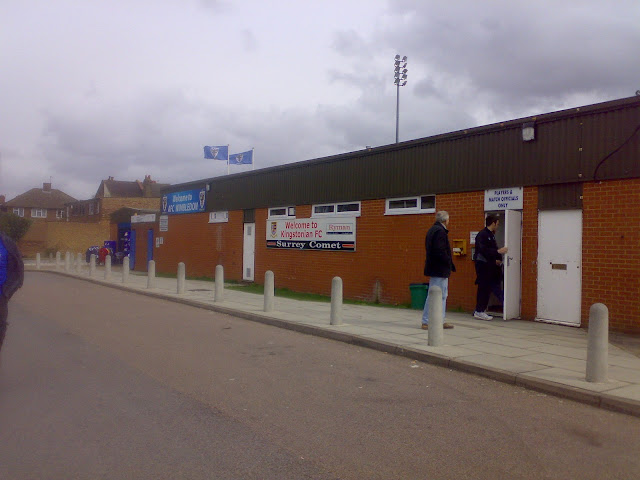 The main seated area at the ground is the PAUL STRANK STAND. Following their promotion to the Blue Square Premier, AFC Wimbledon upgraded it to a 1265 capacity, up from about 800. 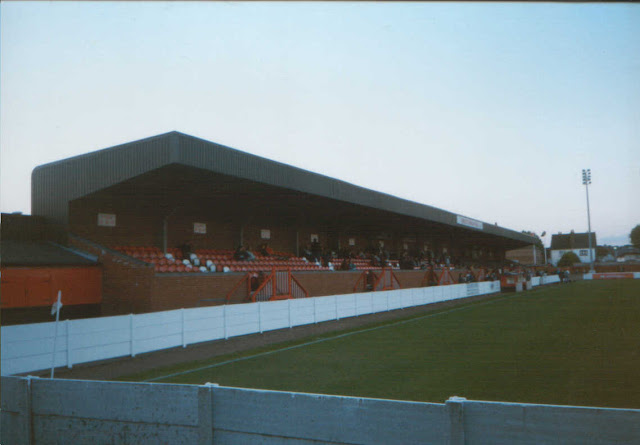 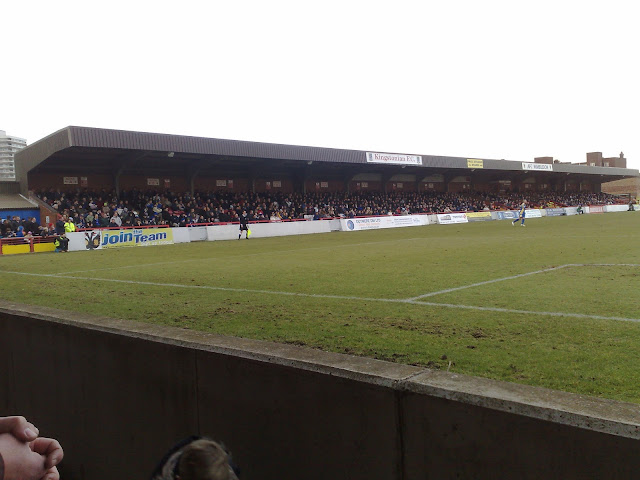 THE KINGSTON ROAD END used to be a shallow part covered terrace but following their promotion to the football league, more seats were required. So it was converted into an 600 capacity seated end which is split between home and away fans. 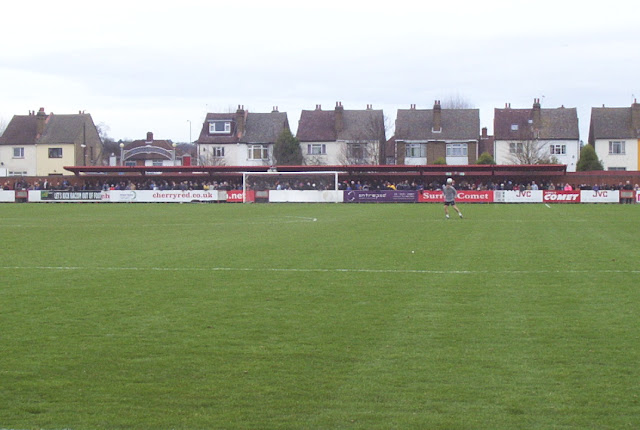 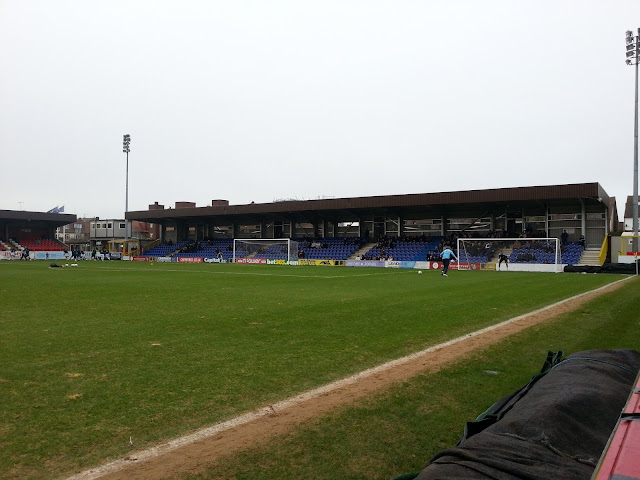 The TEMPEST END used to be uncovered, but around 5 years ago, this had a roof put on it and is now the best terraced area in the ground. The steps are quite deep, so you would be unlucky to have a bad view 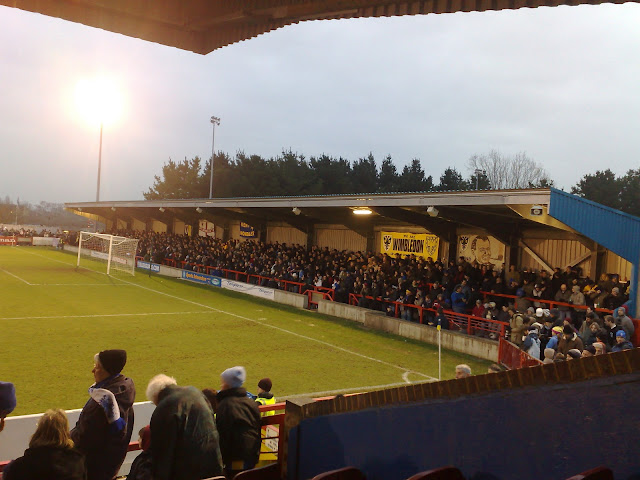 The YOUR GOLF TERRACE and is comprised of narrow terracing, so your view can be poor if there is a big crowd, which has been the case for most of my visits with Wycombe. This is the away end and offers the poorest facilities in the ground, though it is at least part covered. 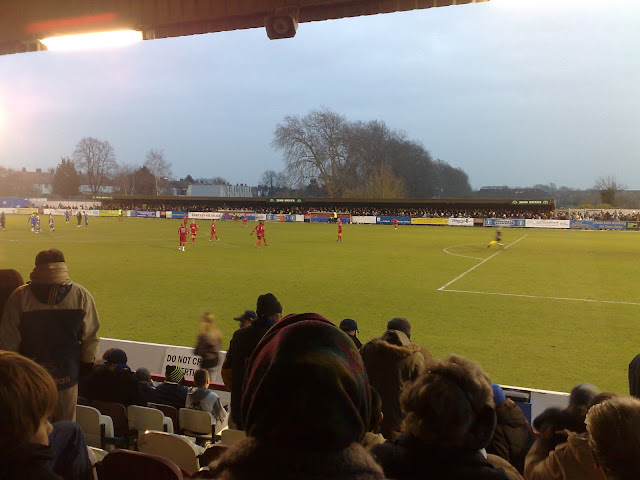