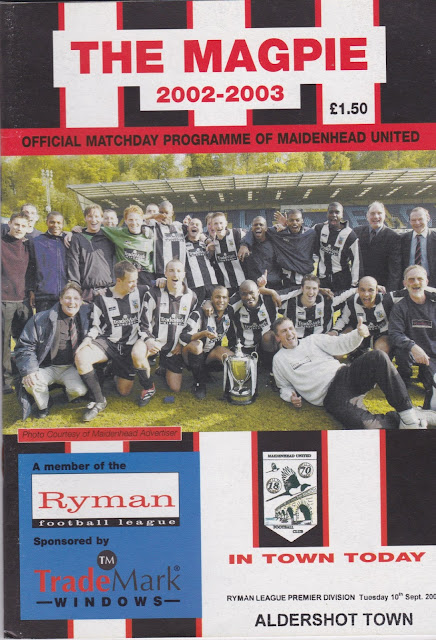 1:  The club were formed in 1870, moving to their current York Road home a year later. The ground holds the world record for being the oldest football ground in continuous use. They were originally known as Maidenhead FC, merging with Maidenhead Norfolkonians in 1918 to form the modern version of the club.

2:  Along with local rivals Marlow, Maidenhead United hold the record for entering the most FA Cup competitions. Starting in the inaugural 1871/72 tournament they have racked up 134 appearances as of the end of last season, missing only the 1876/77 competition up to the present day. They reached 3 Quarter Finals in the late 1800's, although in modern times their record is the 1st Round which they matched last season, taking League 1 side Port Vale to a replay.

3:  Maidenhead United only competed for 5 seasons in the FA Amateur Cup, however, that didn't stop them reaching the semi-final in the 1935/36 season. They ended their run by losing 4-1 to Ilford in a game played at West Ham United's Boleyn Ground.

4:  The club reached the Quarter Finals of the 2003/04 FA Trophy, losing to eventual finalists Canvey Island.

6:  From the years of 1963 until 1963 Maidenhead United played in the Athenian League. They had their best ever placing in 1966 finishing 3rd although things rapidly declined the following year as they finished 14th out of 16 teams.

7:  For the bulk of their modern history they have been in the Isthmian League, mainly around it's lower 2 divisions when it was a 3 tier league. They had their best ever finish of 10th in the Isthmian Premier in 2002/03 which at the time was at step 2 of the pyramid.

8:  Since non-league's reorganisation in 2004, they have been in the Conference South apart from one season, their 12th placed finish in the Isthmian Premier being enough to see them admitted following the introduction of a 2 league step 2. They have struggled, even being relegated and spending 2006/07 in the Southern Premier, bouncing back in the playoffs. They had their best ever finish of 6th in the Conference South in 2008/09 and were in a place of matching that last season as they finished 7th.

9:  The Berks & Bucks Senior Cup has been won on 18 occasions, with only Wycombe Wanderers with their 29 trophies winning it more than them.

10: Maidenhead have had several ex-Wycombe players in their ranks, given the locality of the clubs. Currently, Alan Massey plays for them though the most famous connection is Lawrie Sanchez who played for the club before going on to manage Wycombe to the FA Cup semi-final in 2001.

My first visit came on a Tuesday night in September 2002. It was probably my most enjoyable visit as I feel that York Road is always a ground that is better under the lights. Wycombe were in a state of transition at the time and the first cracks in Lawrie Sanchez's reign were starting to appear. So it was good to get down to a local club and see a number of our former players turn out for Aldershot Town who were on their way back up the leagues following the original Aldershot FC going out of business.

A number of Wycombe fans made the journey over to Berkshire and had an enjoyable time with plenty of nostalgic memories being discussed from our Conference and early Football League days. Dave Carroll and Jason Cousins had represented the club impeccably back in the day, while Paul Buckle, Lee Holsgrove and John Nutter had both played smaller parts in the day. We would also see future Chairboys representatives Nikki Bull & Martin Kuhl also played. However, the biggest reception was reserved for former Oxford United striker Paul Moody who took all the banter he received in good spirit. The game ended in a 1-1 draw, with Maidenhead scoring first if I recall correctly. 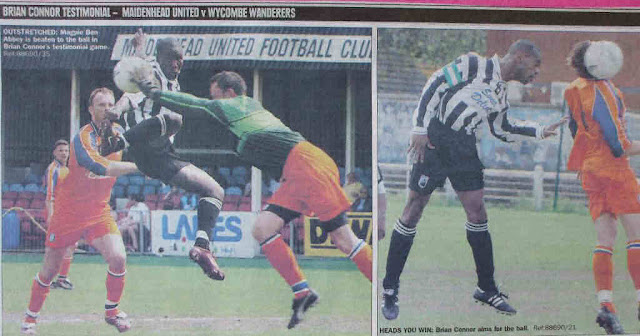 Subsequent visits were made with varying regularity down the years, with convenience playing a big factor whenever I fancied a random game of football and Wycombe were not playing. Wycombe used the ground for a number of reserve games once Wasps moved in having used Aylesbury United and Marlow in the past. Other than that, pre-season games and a Brian Connor Testimonial against Wycombe feature and I still can't remember the score of the latter, despite lots of Google searches.

The only other games I saw Maidenhead United at York Road  were for FA Trophy clashes. Firstly I managed to attend 117 games during the 2003/04 season. At the time that was a mad amount, but now that would be me taking it very easy! The game in question was a 2-1 win against Swindon Supermarine with the lower ranked visitors giving the hosts a good game in a replay. Later on, Maidenhead were again the favourites against AFC Wimbledon, being a league higher than their opponents at the time. But the Wombles took over York Road, cantering to a 2-0 victory that should have been a wider margin.

As part of my mission to update my blog, I was making revisits where and when it made sense. As Maidenhead United had been one of the 168 grounds that I had visited before I'd even started my blog, it was in prime position for another visit, especially as they had built a new stand since my last visit. Last season I had tried to get tickets for their FA Cup Visit v Port Vale but was unsuccessful. When Wycombe announced that they had a friendly at York Road in late July, it was also the same day as the Maidenhead Beer and Cider festival, I was delighted. It gave me a chance to practice my two favourite hobbies. When I checked in the week before the game they had 34 ciders that I'd not yet had, so I was sure to fill my boots as I could get 9 thirds of a pint for a tenner.

Of course, with that amount of drinking it would be a bus ride, but luckily my parents were going and could give me a lift back to save getting a return. I figured that I could get the 10.45 bus from High Wycombe, dropping me in Maidenhead at 11.37. That would give me just enough time to be ready and waiting at the festival for opening time. 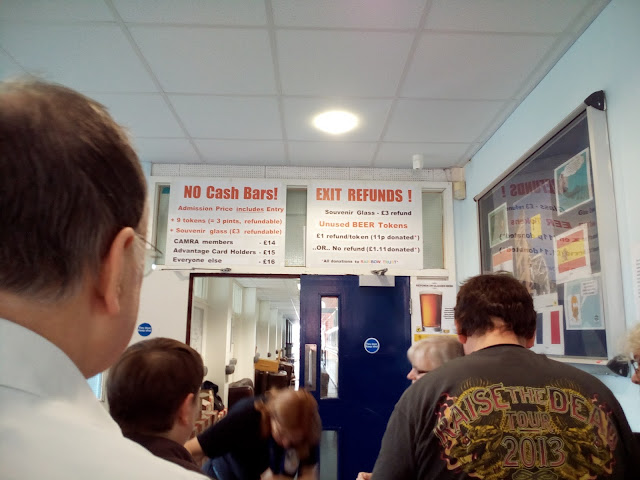 On the day of the game, I woke when my alarm went off at 8.15. I had a bath and got ready as well as catching up on Facebook. By the time I left it was nearly 9.30 and so time was pretty tight if I wanted to walk the 4 miles in time to get the 10.45 bus. I jogged some of the way and in the end made good time, getting cash out before meeting Paul & Sue at the bus station at 10.30. We had a 10 minute wait before our bus, with the day ticket costing £4.60. I say that but the driver only printed me off a £3.60 ticket and trousered a quid for himself. I didn't notice until part way into the journey and it's a good job I was only be using the bus to get to Maidenhead and getting a lift home with my parents. The bus was pretty busy, a rare phenomenon in my experience but the beer festival and football meant increased popularity. We made our way slowly but surely through Loudwater, Bourne End and the like as the bus tried to serve as many areas as possible on the way to its eventual destination. I'd not had any breakfast so I was quite peckish by the time we arrived in Maidenhead around an hour later. 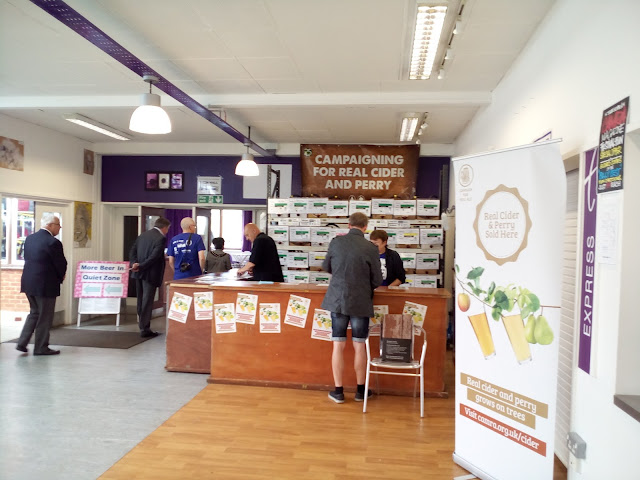 I walked across to the festival at Desborough College which took around 10 minutes. There was another 10 minutes to queue to get in, but soon enough I was in cider heaven. With 9 thirds included in my entry price I was going to tick a fair few off my list and Salt Hill Cider was top of the list. The guy who makes it is a Wycombe fan and I have campaigned, without success, to get it sold in the club bar. I had a pint of their Urban a Fox, and it was just how I like it. With 8 tokens still left, there were still a lot of magical tastes to enter my mouth - here is what I had.

Ham Hill Cider - bit sweet for my liking, but still delicious
Moons Farmhouse Dry - Nice and crisp
Salt Hill New Rose - had beetroot in it for a subtle flavour change
Venton's Sweet Maid in Devon -  a nice Normandy style cider
Cockeyed Hedge Rose - had Elderberry in it
Dorset Sunshine - finally a dry cider to end my time at the festival 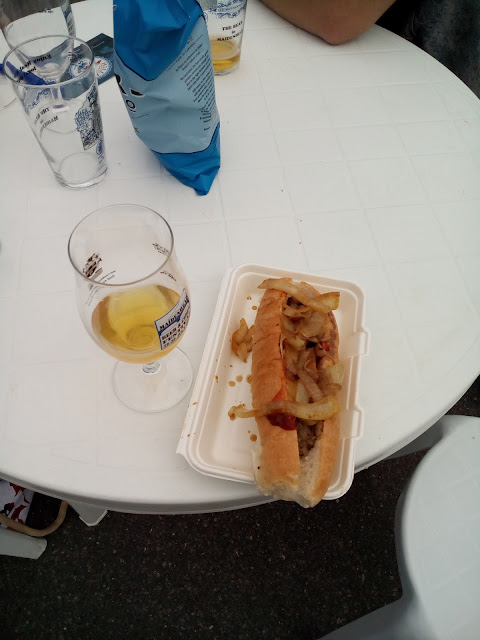 By now I fancied getting some food at Wetherspoons,  even though I'd already had a very nice Boerwors Sausage Roll at the Festival. I cashed in my glass and a couple of beer tokens,  getting a fiver back before I walked into town. I went to the Bear,  my 102nd Wetherspoons and had a pint of Strongbow with my BBQ Chicken Panini. Leaving at 2.30, I made my way to the ground,  arriving a few minutes later . I bought another pint of Strongbow to have with the match and settled down on the halfway line to watch the game. Wycombe put in not the most convincing first half performance, but improved after the break, as you can see from the Non League Paper's match report below.

During the second half I met my Mum & Dad as I was getting a lift home with them. I got home in good time but the over indulgences took their toll on me and I was asleep by 6.30, adding to my already strange sleeping pattern. I ended up waking about 1am and watching TV until I was due to go to work at 4am. Surprisingly I wasn't too tired the next day and didn't need a sleep in the afternoon. 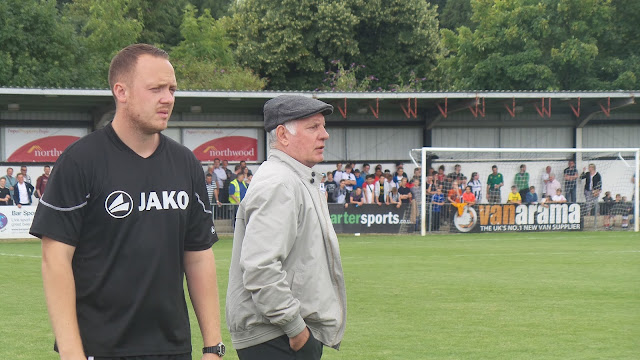 YORK ROAD is the ground that has been in longest continuous football use in the world - acknowledged by FIFA and the FA as it has been home to Maidenhead United a year after they formed in 1871. As a consequence, the ground is right in the town centre - a joy for coming via public transport but you face paying for an afternoon's parking should you choose to drive. There are a large range of outlets in the town, and the ground itself has a good tea bar and clubhouse, as well as a range of merchandise. As you would expect from a venue of this vintage, there are some nice touches, including a lovely painted mural on one side of the ground. 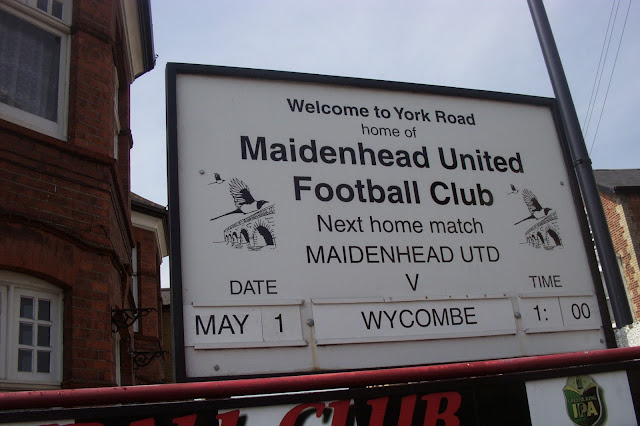 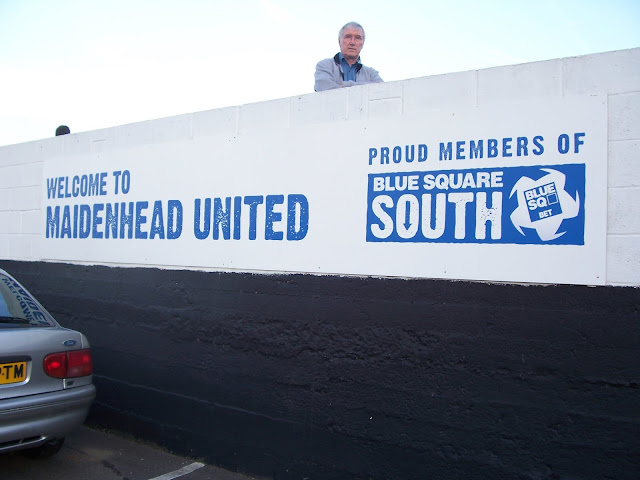 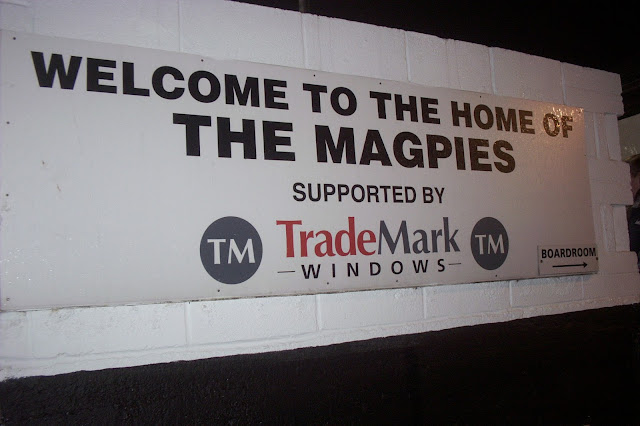 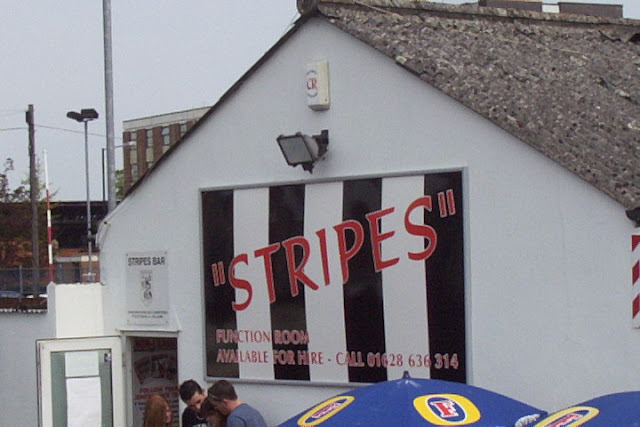 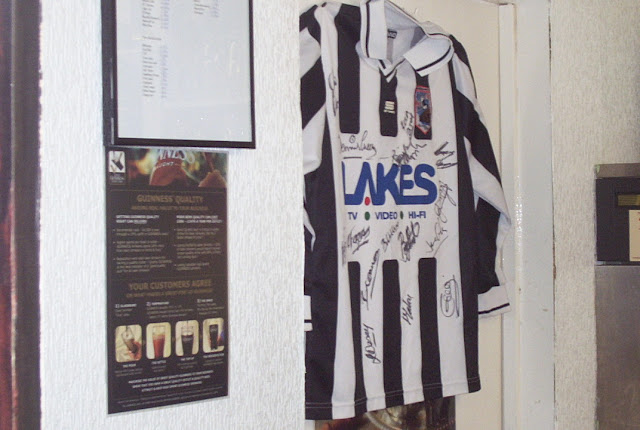 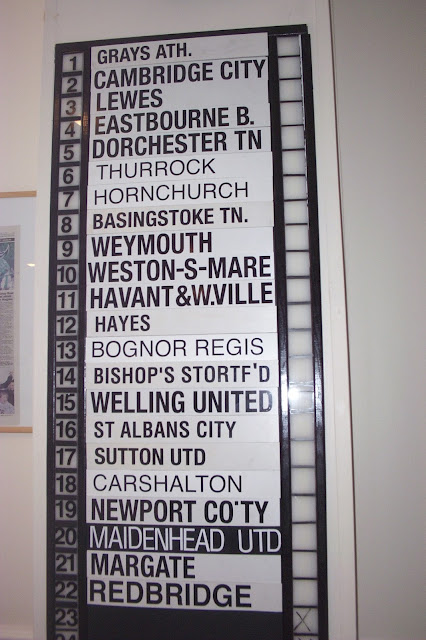 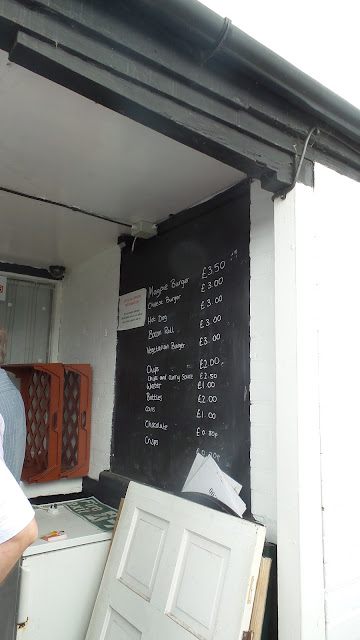 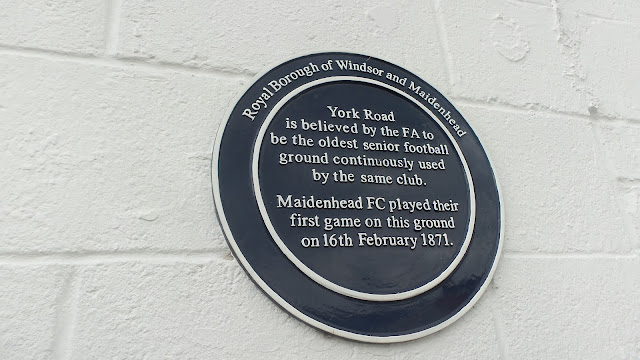 The East side is to your left as you enter the ground and is a partly covered terrace with a capacity of around 1000, approximately 300 of those under cover. 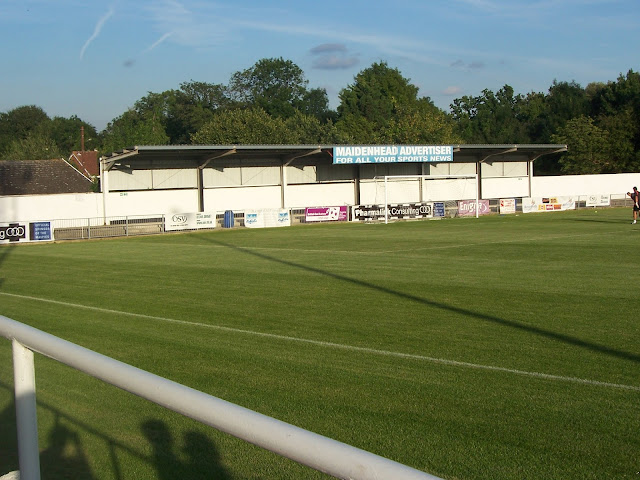 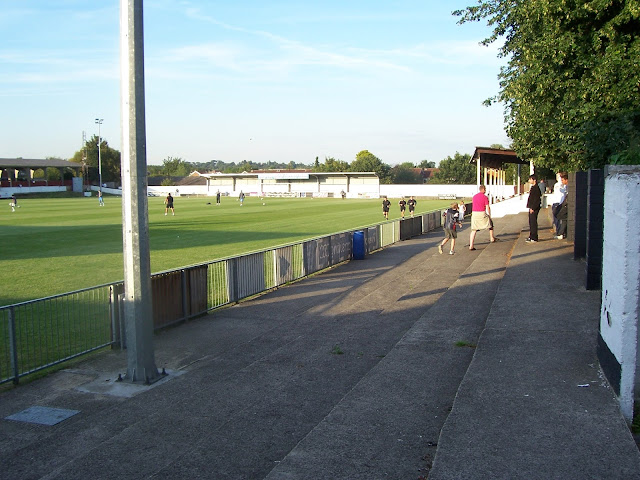 The opposite end is the BELL STREET END, again a terrace, but this time with 2 areas of cover for around 550. 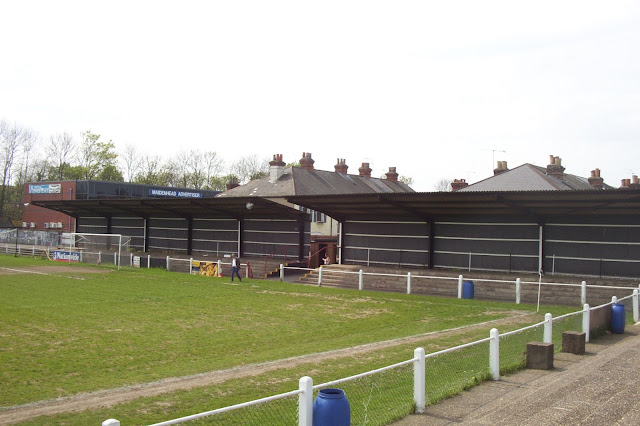 The CLUBHOUSE SIDE is also where all the dressing rooms are. There are areas of flat standing as well as a bank of uncovered terracing. 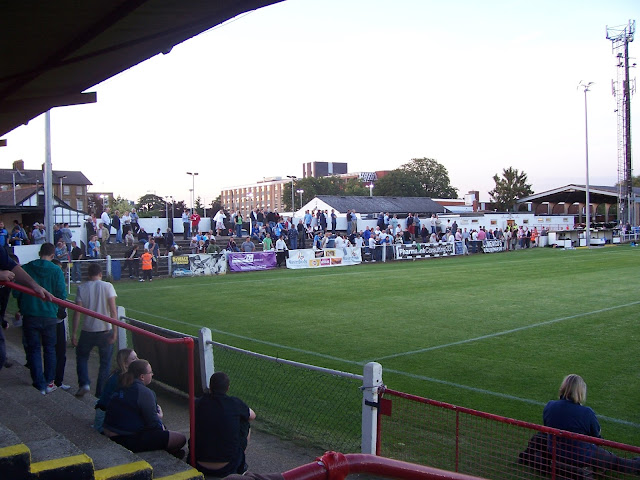 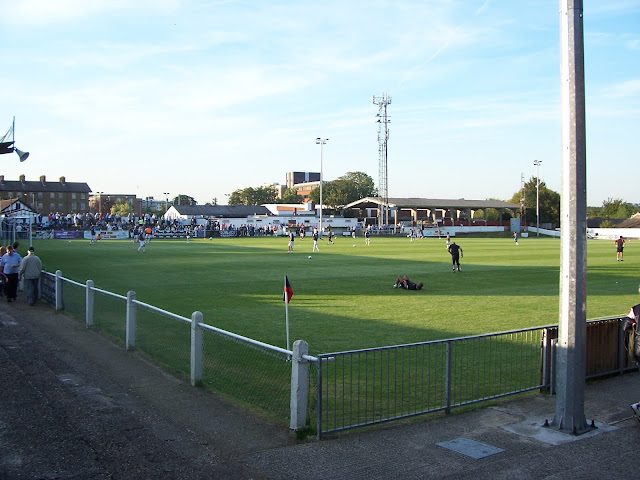 THE MAIN STAND is the only area of seating in the ground and was originally a 250 seater stand on my first 9 visits. However a few years ago it was upgraded to a 550 seater smart new stand with it being in place for my latest visit. It is located on the railway side of the ground. 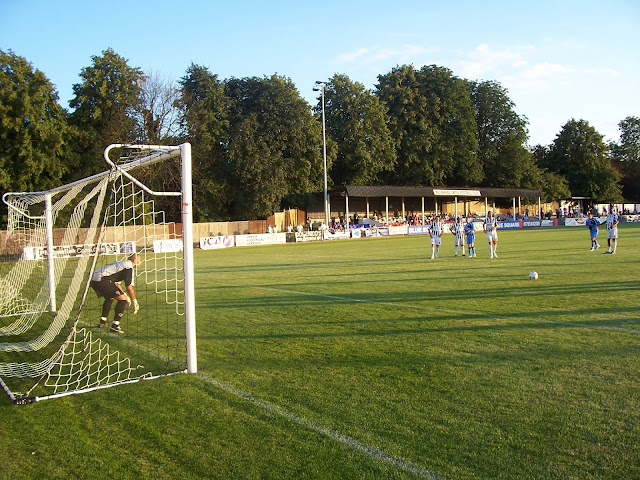 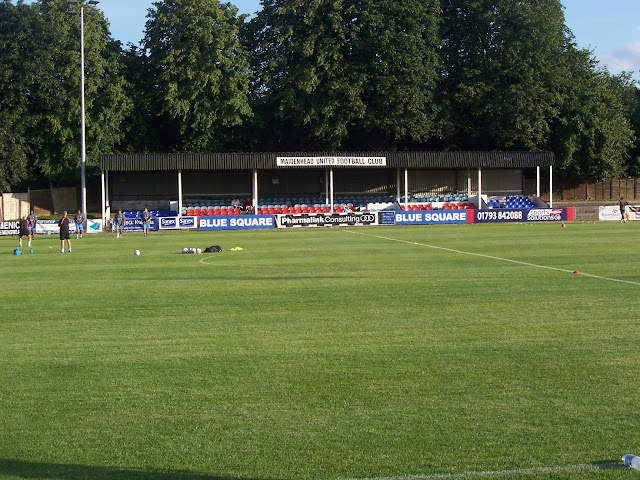 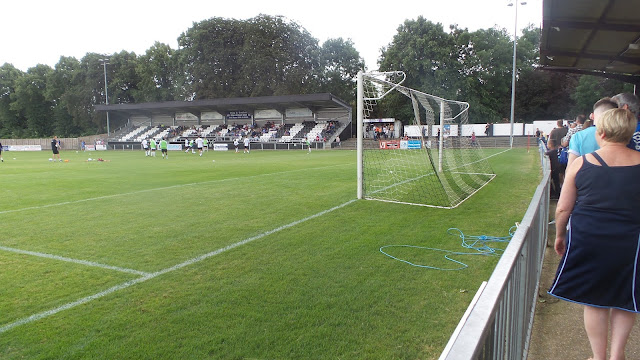