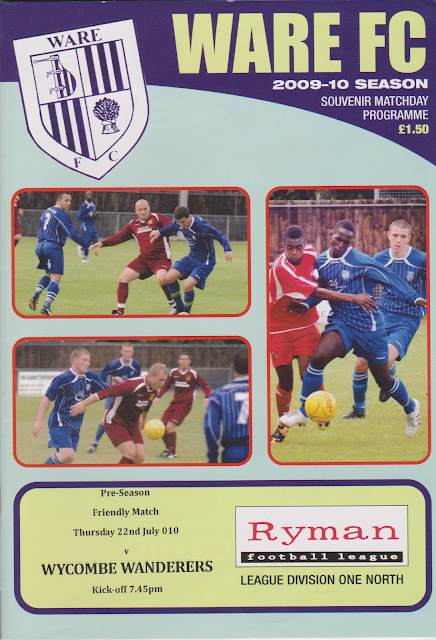 WARE FC were founded in 1892 and started out life in the East Herts League, before moving to the North Middlesex and Herts County Leagues. Joining the Spartan League when the Herts County League disbanded in 1925, they remained here for 30 years. Spells in the now defunct Delphenian and Athenian Leagues followed, before they joined the Isthmian League in 1975. They struggled in its second tier and after a number of near-misses they were relegated to Division 2 in 1982. Results continued to be disappointing and despite a couple of top-half finishes they were relegated again in 1997. Now in Division 3, things finally started to improve. The League was renamed Division 2 following the establishment of the Conference North & South and it was from here that they won promotion in 2006 after finishing as champions in the league's final season. Since then, they have been at step 4 of the non-league pyramid. Apart from season 2015/16, where they competed in the Southern D1 Central, they have been in the Isthmian D1 North for the entirety of that time. The best ever finish in modern times came in the 2007/08 season when they finished 4th, losing to Redbridge in the playoff semi-finals. Bottom half finishes have been the order of the day for the past 7 seasons, and this trend looks set to continue with Ware sitting in 20th at the time of my second visit. 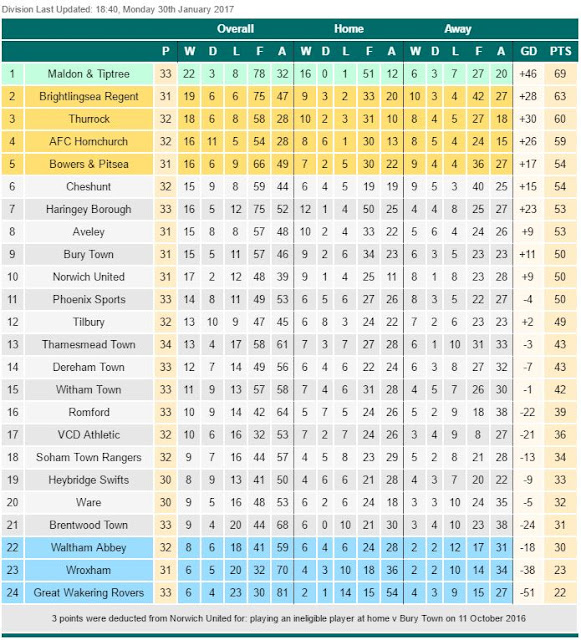 The best-ever run in the FA Cup came in the 2007/08. Starting against Wembley with a 4-1 win in the Preliminary Round they went on to defeat Great Wakering Rovers, Thurrock, Hythe Town and Tonbridge Angels in the remaining Qualifying Rounds. This set up a first round game against Conference side Kidderminster Harriers where they bowed out 2-0 in front of their record crowd of 2,123. There's not been a huge amount of success in the FA Trophy with a 3rd Qualifying Round defeat to local rivals Hertford Town in the late 70's being their best effort. 2002/03 saw a great run in the FA Vase, with a 4th round defeat to Clitheroe ending their hopes. There have been plenty of local cup wins, with the Herts Senior Cup being lifted on 5 occasions, the Herts Charity Shield six times and the East Anglian Cup once. The most famous player to turn out for the club was Micah Hyde who came out of retirement to play a game last season. Current manager Anwar Uddin also had a good career, making his name at Dagenham & Redbridge where he made 188 appearances. The town of Ware itself has had a few well-known residents, most notably Brian Wilde who played Mr Barrowclough in hit TV sitcom Porridge. 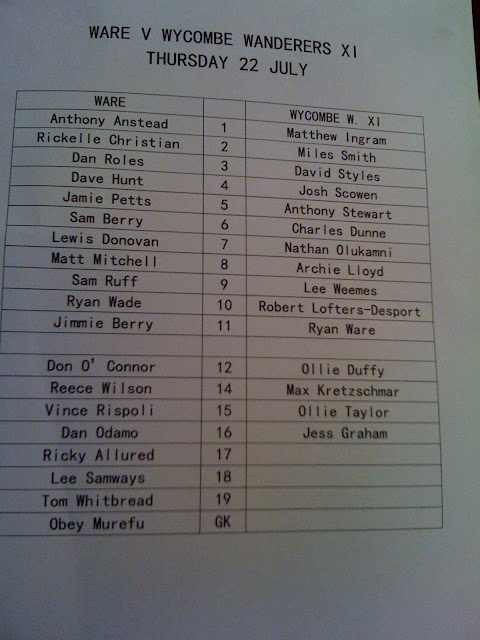 As I'd not visited Ware, I was pretty pleased when Wycombe announced that thwy would be sending a reserve team there on a Thursday night. I had arranged to meet my mate Dale at his work at 5PM, we thought this would be plenty of time to make the just over an hour journey, seeing as the kick off was at 7.30. However, we had not accounted for the M25 being even worse than usual and so after visiting Hertford Town en route for a quick few pictures of the ground, it was getting on for 7.40. We paid to get in, though at the time I didn't think there was a programme available at the time. However, I later picked one up when I spotted it in a programme catalogue, and decided to order it. It was a good effort, especially for a low-key friendly game.

The only goal of the game came in the second half of the game. A Lewis Donovan shot was only parried by Wycombe keeper Matt Ingram and substitute Ricky Allured was there to follow up from around 6 yards. A more detailed report is below, and the highlights above also come from the same 'The Cold End' blog. The Wycombe lineup was a youthful one, with several players going on to do well for Wycombe, and others drifting into non-league football. On the eve of my second visit, I google all the players to see what they were up to now, finding the following results. 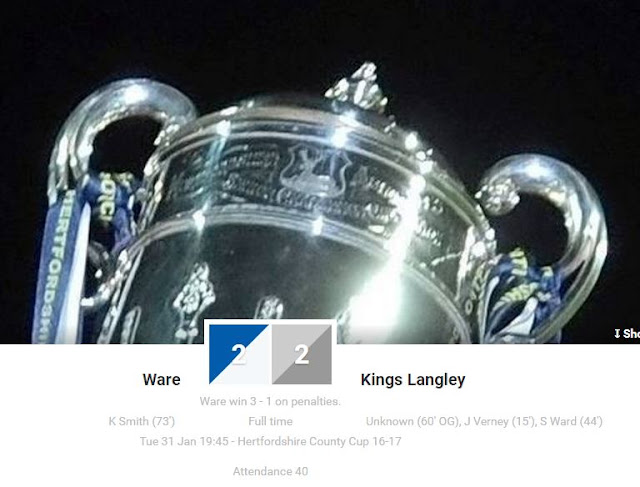 With there being very little choice on this date, a revisit was always a possibility. Ideally, I'd have gone to Exeter City v Wycombe Wanderers, as it was a ground that I really wanted to revisit, having only been once. However, I didn't fancy a trip on the coach, and try as I might I couldn't persuade fellow hopper and Wycombe fan Anwar to make the journey down in the car with me. Neither could I rope him into doing a new ground, but he did say he fancied a revisit to Ware, as it would be a fairly cheap one. With my blog entry from this one being really brief, having been done in a rush when I first started the blog, I was happy to do this one. As with all of my revisits this season, it would give me a chance to expand on my first visit, recall some memories and also get some better photos. 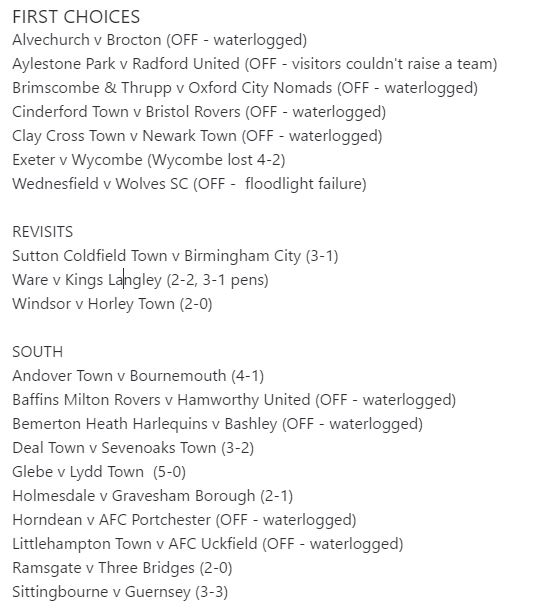 It was my usual day off on the day of the game, but I didn't bother with my usual walk down town. It was drizzly and I didn't need anything, but most importantly I couldn't be bothered. Instead, I stayed at home and caught up with some things that I'd been putting off for ages. After a dinner of Chicken Jalfrezi, I left at 5.45. The roads were terrible and it took me over 45 minutes to get to Aylesbury to meet Anwar. He was there and waiting for me at 6.30, thankfully the onward journey was a lot better. On the way we discussed Wycombe's epic game at Spurs at the weekend, where we put up a fine showing but ultimately lost 4-3. I also found out I'd be on my own on Tuesday as Anwar had chosen to support Wycombe in the Checkatrade semi-final at Wycombe. There was no chance of me doing that, such is my derision at the competition. At first I hoped we would get out of it ASAP, but now we have got this far, I hope that we win it, especially given the prize money on offer. However, I won't be at Wembley to see us there if we get through. 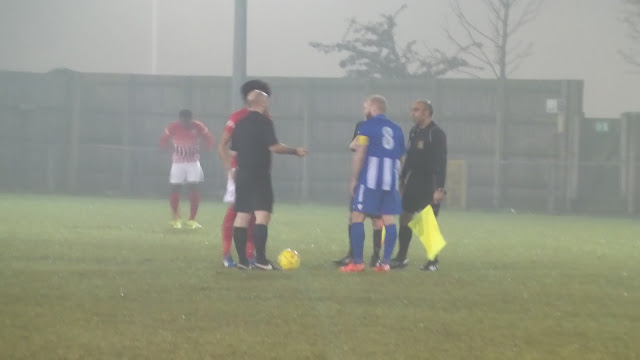 We got to the ground at 7.30, paying £8 to get in. There was a small crowd in attendance for this low-key game, and the club shop was closed, which was a shame as they have a great selection of programmes. Neither could I find any team lineups anywhere. The game started at a fair pace, and both keepers had to be on their toes to make good saves in the opening five minutes. Kings Langley started to take control and they got the opening goal of the game on 14 minutes. The home keeper spilled a fairly simple shot, and Kings Langley's James Verney was there to follow up with a simple finish. Ware had a good spell just before the break, but Kings Langley doubled their lead just before half-time. It was a great goal too, with an initial effort headed away but Steve Ward was there to volley it back into the top corner from the edge of the area. If the first half belonged to Kings Langley, Ware had the better of the second period. They started their comeback on 57 minutes when a deflected own goal reduced the arrears. Then on 70 minutes, more lacklustre defending by the visitors was punished when Kambo Smith headed home at the back post. The game finished 2-2, and I was expecting extra time. However, I was delighted when it went straight to penalties. Ware triumphed 3-1, with the visitors missing all 3 of their first penalties. Ware for their part missed the first 2 before normality resumed and players started actually scoring their spot kicks. I managed to get a video, which is below.

It had turned out to be a decent choice of game. I'd not have been in the greatest of moods if I'd made the mammouth trip to Exeter to see Wycombe make 7 changes and lose 4-2 in what sounded like a disappointing performance. A groundhop would also have been tricky, with every single one of my choices via Aylesbury off. Even in the south, it was only Kent that completely survived the deluge. All in all it would have been a highly frustrating night. We left around 9.45, listening to BBC Three Counties for the Wycombe report before switching to Radio 5 for a report on a distinctly underwhelming 'transfer deadline day'. I dropped Anwar off at 10.40, getting home myself at 11. I couldn't get to sleep for ages, having a very short nights sleep and having to catch up the following afternoon. 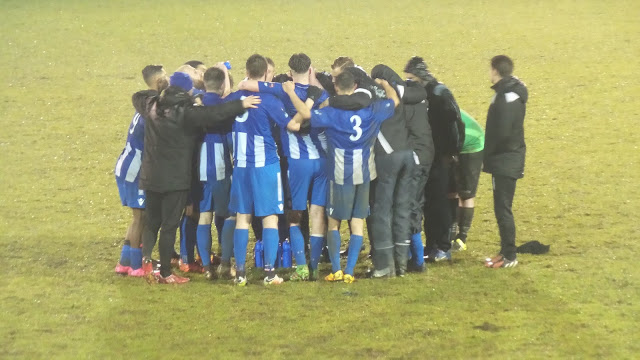 WODSON PARK is a smart modern ground. A nice sized main stand is complemented by an area of covered terracing opposite. The rest of the ground is uncovered terracing. The walls of the ground are made of wood, as opposed to the usual boring concrete. On my first visit there was an excellent range of programmes in the club shop, as well as other well-priced souvenirs. 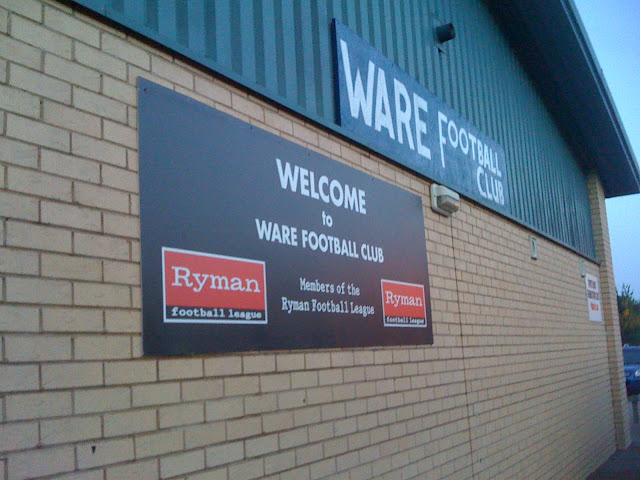 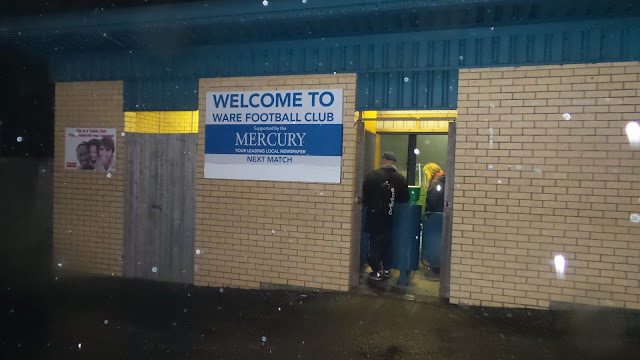 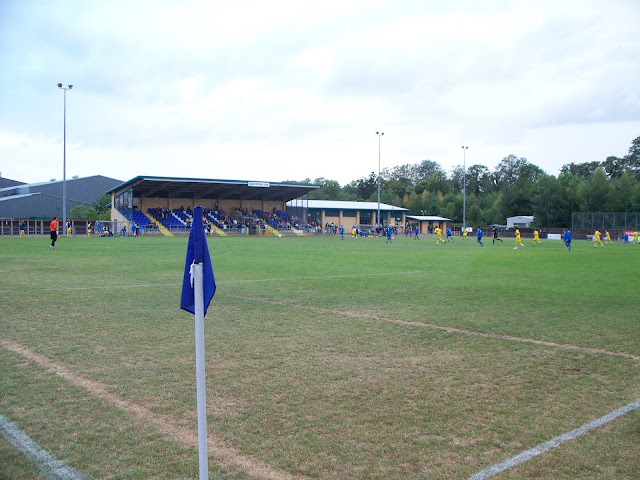 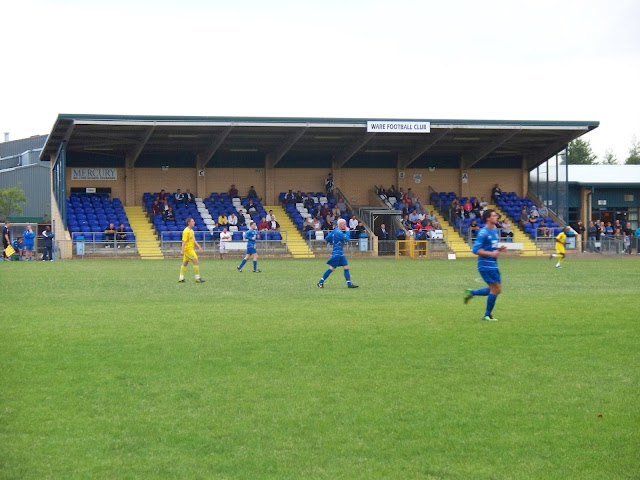 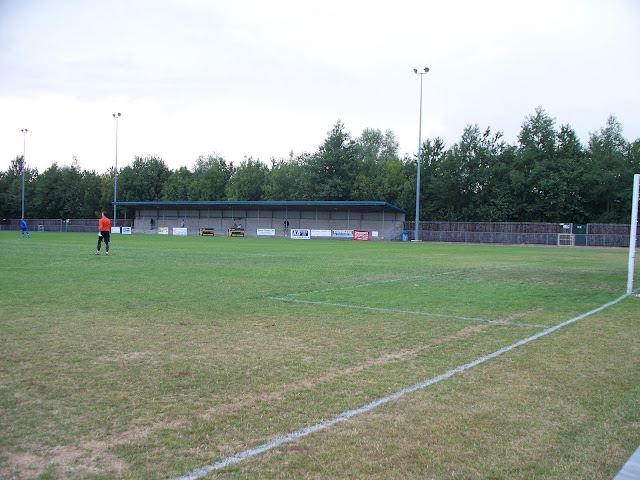 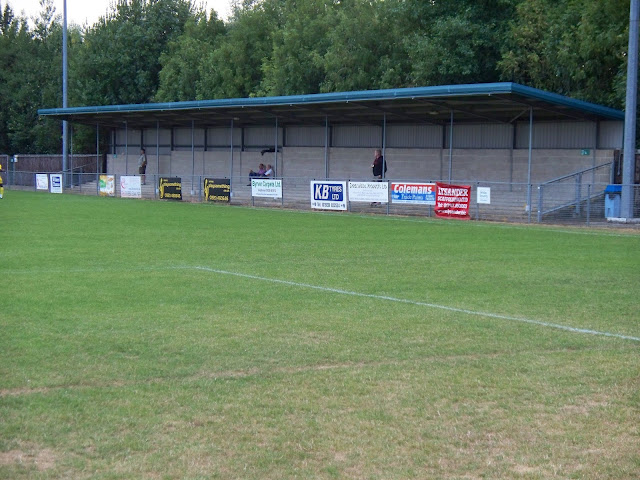 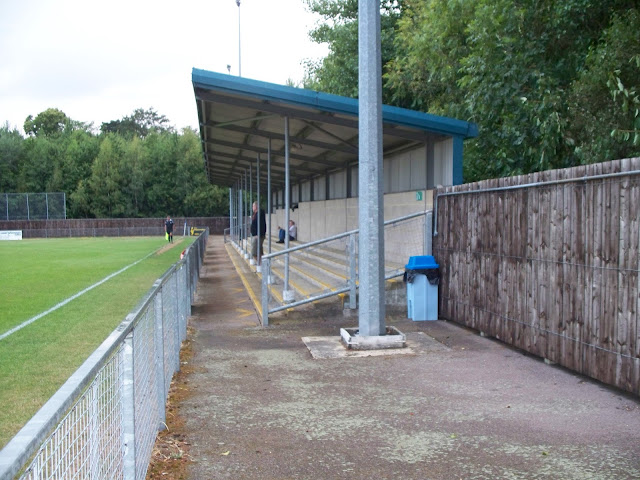 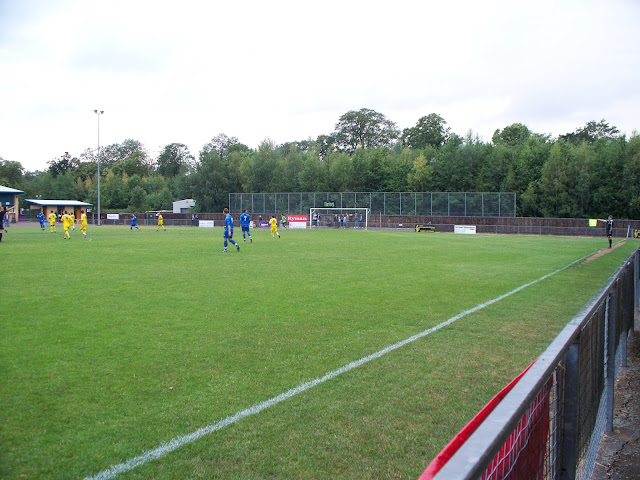 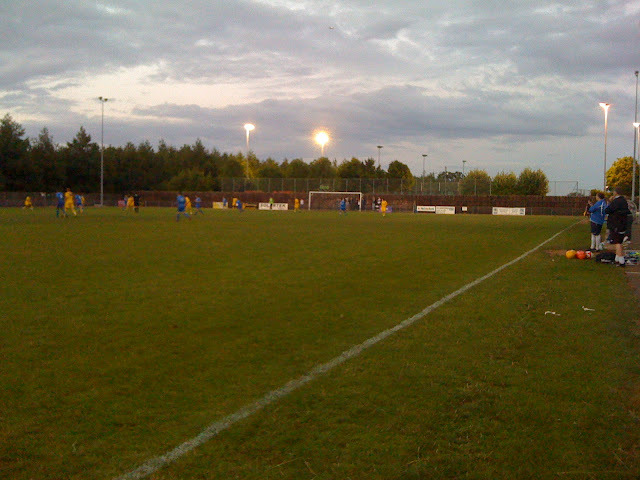 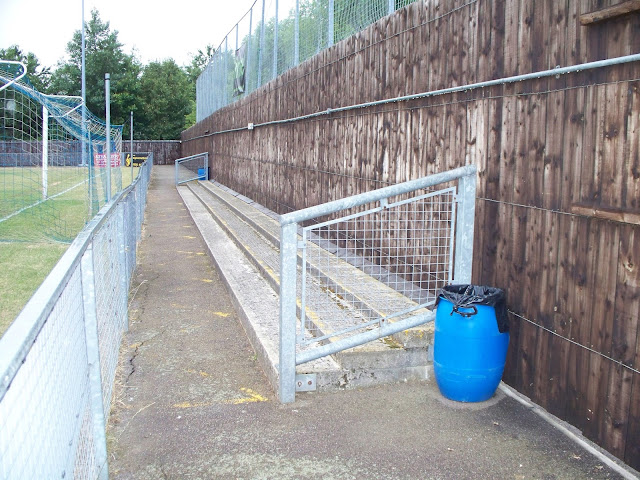 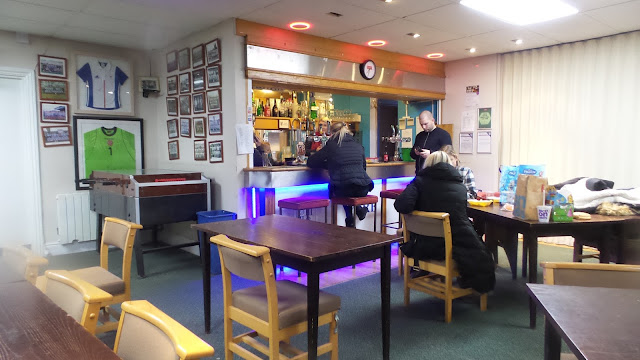 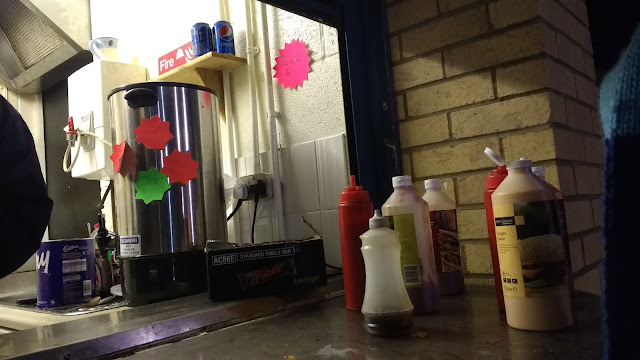