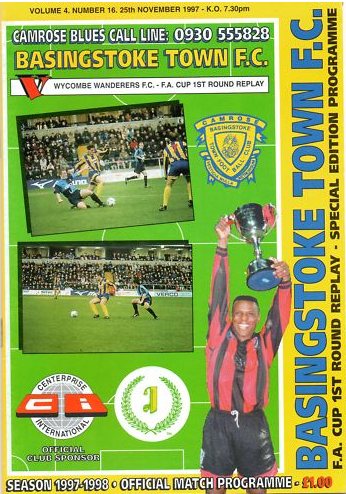 The club was formed in 1896 following a merger between Basingstoke Albion and Aldworth United. The first 75 years of the club's history was spent in the Hampshire League with varying degrees of success. After they had been crowned champions of the league for the third time, Basingstoke Town made the step up to the Southern League Division 1 South in 1971. They'd remain here until 1985 when they were crowned champions and won promotion to the Premier Division. A geographical move to the Isthmian League in 1987 saw Basingstoke finish bottom of the Premier Division, though they did bounce back immediately as runners-up to Staines Town. Despite an 8th place finish in 1990, the club generally struggled and suffered another relegation in 1994. This time they'd take until 1997 to return to the Premier Division, this time as runners-up to Chesham United. The 2000/01 season saw Basingstoke Town's record league finish - 3rd in the Isthmian Premier - at the time a step 2 league. Good results meant that the club was admitted to the newly formed Conference South in 2004. They enjoyed their best ever finish of 3rd in 2015, missing out on promotion to the top tier of non-league football with defeat to Whitehawk in the playoff semi-finals. The following season, a combination of financial issues and poor on-field performances saw a bottom-placed finish and relegation to the Southern Premier. A 12th placed finish last season has been followed up by another mid-table season this time out, Basingstoke Town sitting in 16th prior to tonight's game. 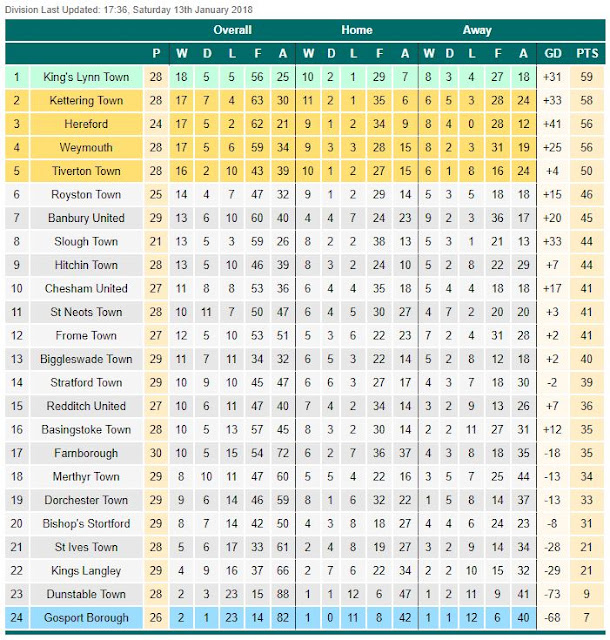 The club has enjoyed a number of notable FA Cup runs, reaching the 2nd Round in 1989, 1997 and 2006. Wins over Football League sides Wycombe Wanderers in 1997 and Chesterfield in 2006 have been the highlights. Basingstoke Town v AFC Bournemouth was the subject of a blooper on Match Of The Day in 1998 when the female narrator lost her thread and said 'The Rymans (sic) League side gave the visitors a second-half .... shit'  as they lost 2-1 in a 1st Round tie. The 3rd Round of the FA Trophy has also been reached on a couple of occasions. The Hampshire Cup has been won on seven occasions, while Basingstoke Town have won the Remembrance Cup twice lifting it two seasons in a row in 2005 and 2006. The record attendance of 5,085 came against Wycombe Wanderers for a 1997 FA Cup tie, whilst the record win of 10-1 also came in the FA Cup - against Chichester City in 1976.

My first visit to The Camrose was for an FA Cup 1st Round Replay with my own team Wycombe Wanderers. I'd witnessed my team surrender a two-goal lead at Adams Park ten days previously. I went with my Dad and my brother and the place was packed. Due to a lack of a proper turnstile, the gateman just opened and closed a door while he checked ticket stubs, though the queue was cleared pretty quickly. Basingstoke had been slightly unlucky not to get a last-minute winner in the first game and gave Wycombe a couple of early scares before we took the lead through a Steve McGavin chip. A comedy of defensive errors allowed Basingstoke's Paul Coombs equalise five minutes before halftime. Wycombe were fortunate to retake the lead on 75 minutes through McGavin's second, though Coombs also completed his brace after he converted a penalty awarded for a foul. Extra time passed without further incident and in the resulting penalty shoot-out male model Dean Beale was Basingstoke's hero, saving the decisive spot-kick from Keith Scott. 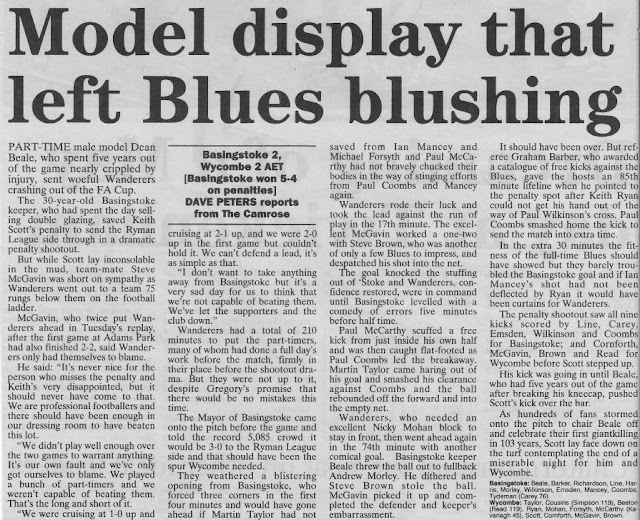 I had to wait another 8 years for my next visit to Basingstoke Town, this one ending in altogether happier circumstances. This time it was a pre-season friendly, with Wycombe winning 7-2 in an entertaining game, typical of the football we played under John Gorman at the time. A talented Argentinean was playing for Basingstoke at the time, whilst also stacking shelves at  5am in the local branch of Boots. He did enough on the night to convince Gorman to take the gamble on him and it was one that paid off with him being a firm fans favourite at Adams Park. The fee was around £15,000 - a real snip and as part of the agreement, we also played another Friendly at the Camrose the following summer. This time we featured a few trialists - former Hibernian midfielder Antonio Murray who is now playing in Australia, Torquay left-back Kevin Sharp who went on to play for Shrewsbury and Rochdale and ex-Bournemouth defender Jason Tindall who went on to play for Weymouth. Now under the tutelage of Paul Lambert, Wycombe adopted a more conservative approach and ran out 3-1 winners. James Taylor gave Basingstoke the lead after 4 minutes but goals from Stefan Oakes, Ian Stonebridge and Jonny Dixon saw Wycombe come through in front of 372 fans.

With Basingstoke Town due to vacate their Camrose home soon, I wanted to get a visit in if possible to get some updated photos and experience the ground as a hopper. Last week was a chance to do so, but in the end, the high £12 admission charge for a Southern League Cup game put me off. Especially when there was the distraction of Bracknell Town's FA Vase replay against Blackfield & Langley. This week had plenty of competition, with fellow hopper Anwar happy to join me for a game, but in the end, none of the choices inspired me. I decided, therefore, to go on my own to the Basingstoke Town v Stratford Town game. The admission was still £12, but the club was caught between a rock and a hard place. It was what they had to do to survive - they'd experienced financial difficulties easily - hence them having to leave their home at the end of the season. Non-League football at this level is getting more expensive to watch, thanks to many factors such as having to meet ever stringent ground grading criteria and increasing players wages. Their club Twitter was extremely helpful and friendly when I was trying to decide what game to go to last week, so I decided to make the fairly short journey over to Hampshire on Tuesday night. It meant that I'd be able to update my blog and recall one of Wycombe's worst performances when we lost to them in the FA Cup over 20 years ago. 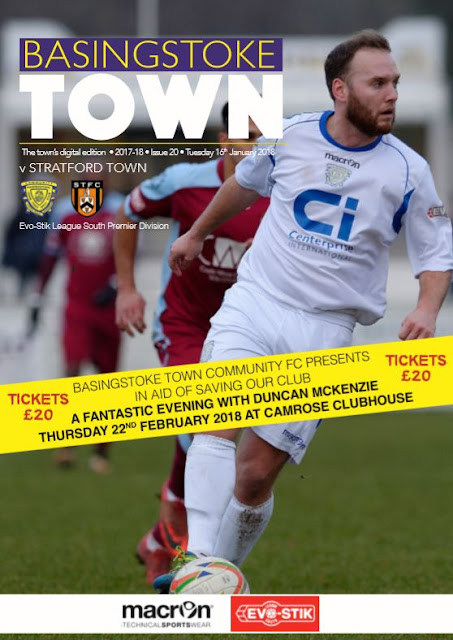 Despite waking at 6.30 on the day of the game, I'd had one of my best night's sleep in ages, having gone to bed at 9 the previous night. After going back to bed for another hour, I woke up, had breakfast and got ready for the day. I was expecting a parcel to be delivered, but with no update other than it was sent yesterday, I decided to walk to town and back to get a bit of exercise. It took me 3 and half hours overall, my only stop being Poundworld where I got some Irn Bru and some Guylian chocolate bars. After getting back, I had chilli con carne for lunch and watched some YouTube videos while playing Football Manager. I also downloaded tonight's programme from the Basingstoke website. I noticed their manager was Terry Brown, who was the manager of Hayes when I saw them beat Basingstoke back in 1994. There was also another couple of former Hayes & Yeading players that I recognised - Sam Argent and Ben Wright. As for Stratford, I didn't recognise any of their players, though I noted that Loyiso Recci and Simeon Tulloch were the only players still at the club, compared to when I saw them for the only time when they beat Wimborne Town 4-2 almost 4 years ago. Though I'd seen Basingstoke play 7 times, I'd not seen them win yet, save for the penalty triumph over Wycombe all those years ago. 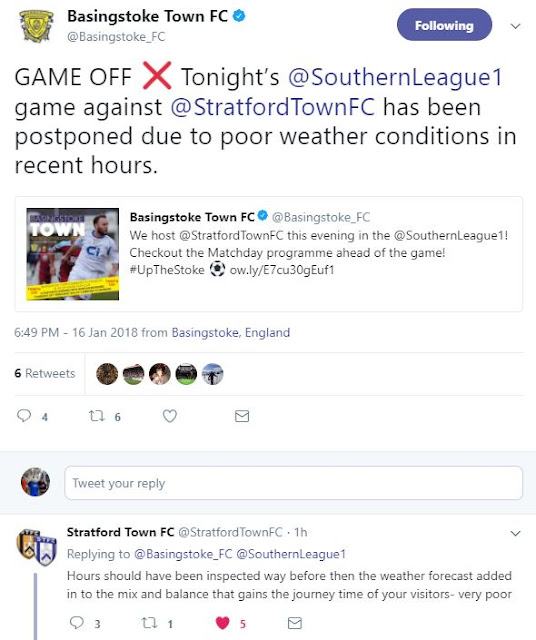 After having dinner, I left home at 6PM. I'd set my Twitter to send through notifications from Basingstoke Town's Twitter account, in case of a late postponement. I listened to the Non-League Nomads podcast which I'd discovered today. It was pretty decent and kept me company for a journey that was slow in places, as you'd expect at the tail end of the rush hour. Just as I was getting off the M4, I saw a load of notifications come through on my phone, so pulled over to see what was up. The news was bad, at 6.49PM, referee Matthew Russell had decided that the pitch was unfit and called the game off. I checked other local options - games at Fleet Town, Hartley Wintney and Reading were still on, but I'd done these fairly recently and was happy with my blog entry for these. I fancied options at Oakwood and Devizes, but both of these would have seen me arrive half an hour into the game. I decided to cut my losses and leave for home. I got in at 7.50, meeting my Mum & Dad who had been away for a couple of days. I went online to see what was being said - the Stratford Town team had been 10 minutes away from completing a near 200-mile round trip when the game was called off. The Basingstoke Town twitter blamed a late bout of bad weather, but looking at the pitch, it was just a light dusting of snow and the only snowflake that caused the game to be called off, was a fussy referee. I was disappointed, as I was looking forward to revisiting the ground. Whether I will get round to it now is anyone's guess - now that I've spent a lot of time updating my blog, there is less incentive with the work all done, but I won't rule it out. 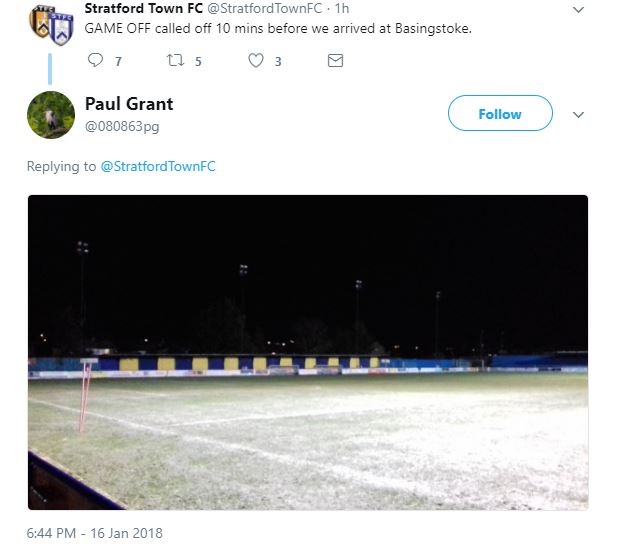 The Camrose is a classic non-league venue, which sadly will be no more in the near future. Tne ground holds up to 6000, with 650 seats, These are elevated above pitch level and offer a good view. In addition, further covered terracing for 2000 is available along the sides, while the rest of the ground is uncovered. The ground is situated near the M3 (which is how I got some of these pictures on a non-matchday) and has a couple of pubs and chain restaurants nearby. The town centre is around a 1.5-mile walk away. 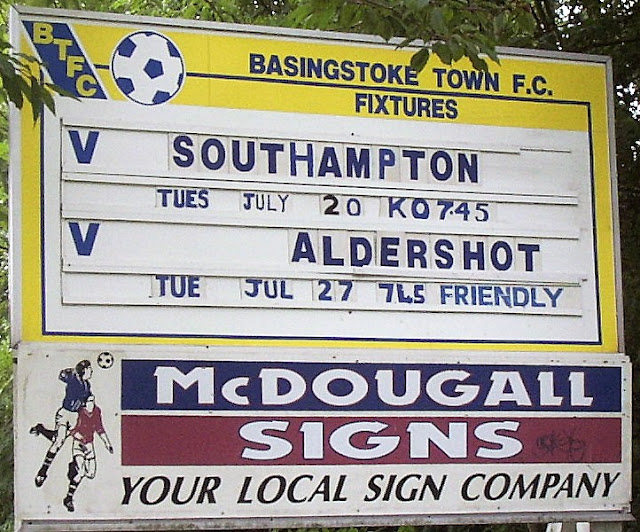 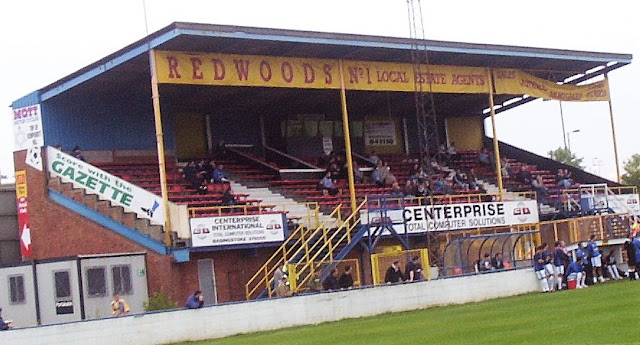 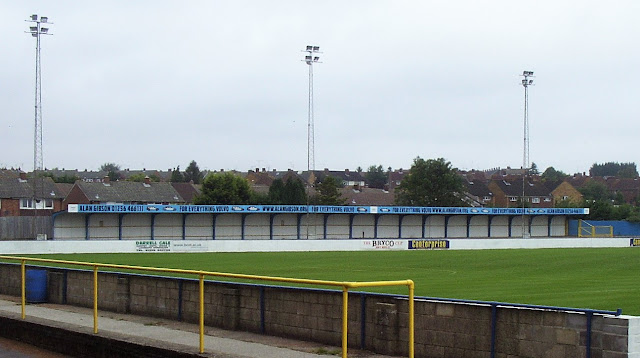 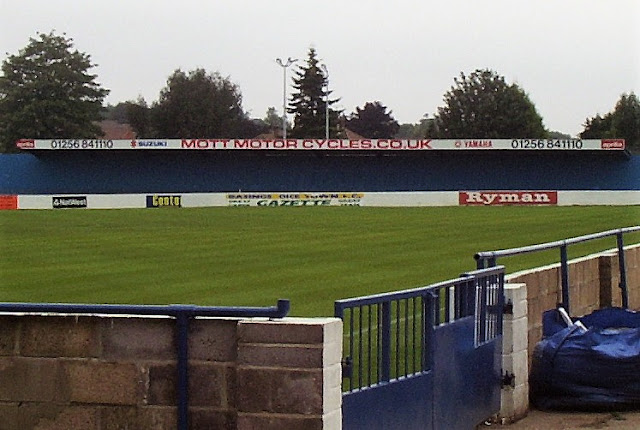