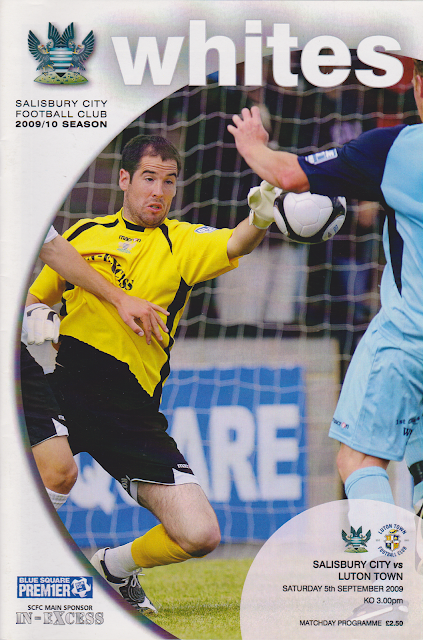 The original SALISBURY FC was formed in 1947 following the end of World War 2. There was a previous Salisbury City, but these folded prior to the outbreak of the war and played in the Western and Southern Leagues. The new club resumed in the Western League, initially in the second tier. They won this at the first attempt and were champions of the top tier twice. In 1968 a runners-up spot was enough to see them accepted into the higher level Southern League. They remained in the Southern League's second tier for over 25 years, bar 1986/87 when they spent a lone season in the Southern Premier, but suffered an immediate relegation. The club rebranded as SALISBURY CITY in time for the 1993/94 season and a couple of years later they had won promotion back to the third tier of non-league football. Despite their best finish so far of 12th in the Southern Premier in 1996/97, they finished bottom in 2002 and were relegated to the Southern League Eastern Division. In 1997 they had moved to their brand new purpose-built Raymond McEnhill Stadium, situated in the Old Sarum suburb of the city. It was named after the then chairman of the club.

Following the establishment of the Conference North & South in 2004, a 6th place finish during the previous season was good enough to see them placed in the Isthmian Premier. A credible 12th place finish was achieved in their only season in their only season in this league before they made the sideways step to the more geographically sensible Southern Premier. Salisbury City were champions in their first season, earning themselves promotion at the first attempt. The success continued with the club finishing as runners-up in their first season in the Conference South which was good enough to see them promoted in 2007. During their first spell at non-league's top table, they achieved two 12th place finishes, the latter coming during their first period of severe financial difficulty. They'd suffered a period of difficulty back in the 1990's but had emerged unscathed, this time they were not so lucky. Entering administration saw them suffer a two division drop and they would start 2010/11 in the Southern Premier.

They bounced back straight away, with Salisbury City finishing 3rd, before beating Hednesford Town in the playoff final in their first season. Two years later they were runners-up in the Conference South, earning promotion to the Conference Premier after defeating Dover Athletic in the 2013 playoff final. Heroic manager Darrell Clarke left for Bristol Rovers during the summer and in his place, Salisbury City appointed one of football's youngest ever managers in 28-year-old Mikey Harris. He guided the team to a decent 12th placed finish in his only season, but despite exiting administration the previous December, the club folded in June 2014. The city then spent a season without a team before the new Salisbury FC were formed in 2015. They started out in the step 5 Wessex League and were champions in their first season. Last season they finished 2nd behind fellow Phoenix club Hereford, before losing to Tiverton Town in the playoff final.

In the FA Cup, Salisbury City had several notable runs, the best of which came during the 2011/12 season. That season they beat Swindon Supermarine, Poole Town, Bishop's Stortford, Arlesey Town and Grimsby Town before going out in the 3rd Round with a 3-1 defeat at Sheffield United. In their only season in the FA Vase, Salisbury reached the semi-final in 2015/16 before losing over two legs to Hereford. They matched that feat in the FA Trophy as well, losing out to Barrow over two legs in 2010. Various local cups have also been won, including the Wiltshire Premier Shield on 15 occasions, most recently in 2009 when they beat Football League side Swindon Town 3-1 in the final. I'd seen them play once prior to my first visit, in my first season of watching Wycombe Wanderers. They came to Adams Park in January 1992, a game remembered most for the spectacular backdrop of a factory fire as Wycombe win 2-0 in an FA Trophy 1st Round tie. 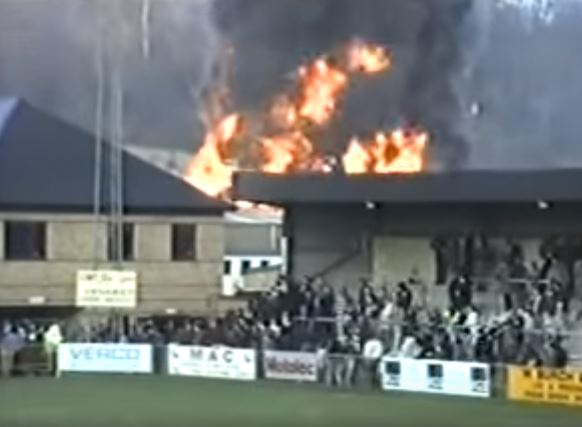 
The week before this game, Salisbury City had gone into administration, obviously due to financial issues. I decided to do what I could do to help, and as Wycombe were playing away at Brighton, I decided to make the journey down to Wiltshire. I had been to the Withdean Stadium before, it was a dreadful ground and so this made the decision easy. 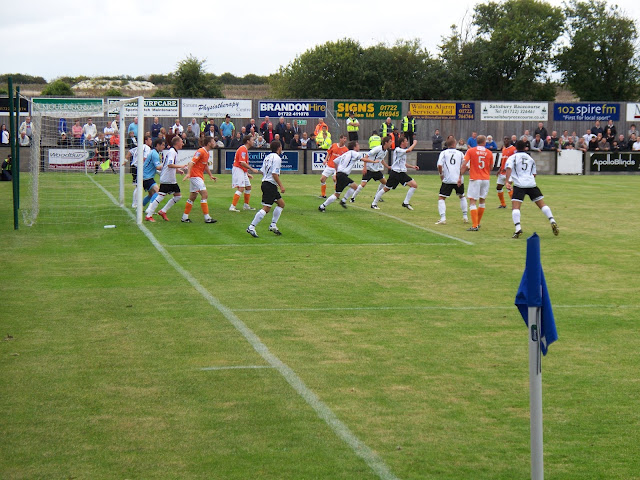 I left home about 10.30, so as to allow time to visit various grounds along the way, arriving at Salisbury just before 2. I went into their club shop to try and buy a pennant, but they were sold out. So I settled for a pint in their bar, as well as Sausage and Chips. And a programme, which although I chucked out, I repurchased at a later date. In a decent game, Kevin Gallen opened the scoring for Luton, before Matt Tubbs equalised for Salisbury. After an easy journey home, I was back around 6.45PM, having enjoyed my day out. 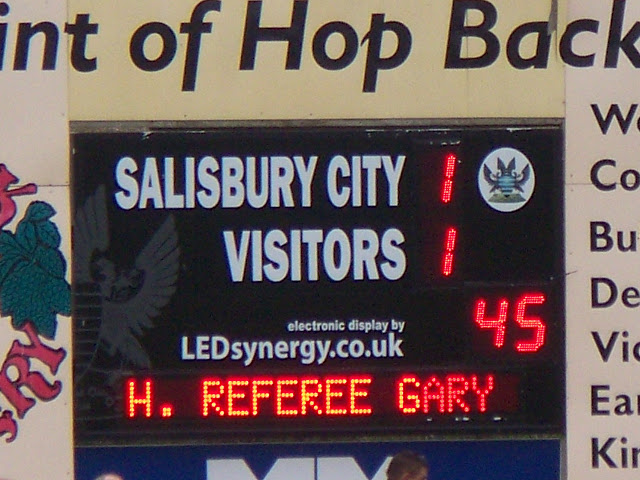 Since my last game on the 28th May, I had had a dull and frustrating summer without football. I'd been glad the boredom had been punctuated by a couple of England games on TV, though it was the usual underwhelming showings against Scotland and France. The plan had to been go easy on the drink and junk food, though that didn't altogether go to plan as temptation was never far away. I did at least get to save some money, with the petrol I bought prior to my last game lasting all summer and little other expense. The most disappointing thing about the off-season was work though. After 16 years loyal service, you should expect security in your job and support from your employer, though I wasn't feeling that. Thanks to a new supervisor, my job felt under threat, despite me trying my best and putting in plenty of hours and it remains to be seen what will happen in the future. My aims for the next season remain clear though - quality over quantity, fewer miles by car and more by public transport, but most of all a far more economical season this time out, after spending nearly £3400 last time out. I'd also finally got around to finding a way to scoring the grounds I visited and rating them out of 100 in the form of a league table. 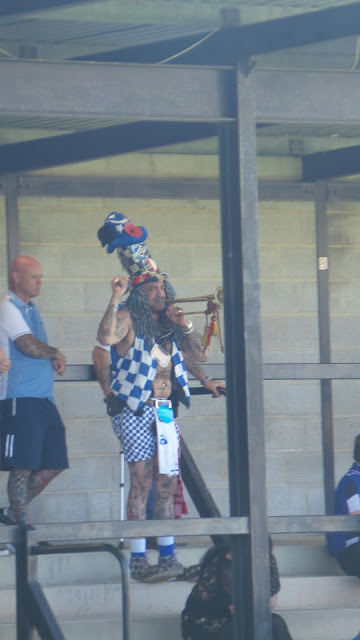 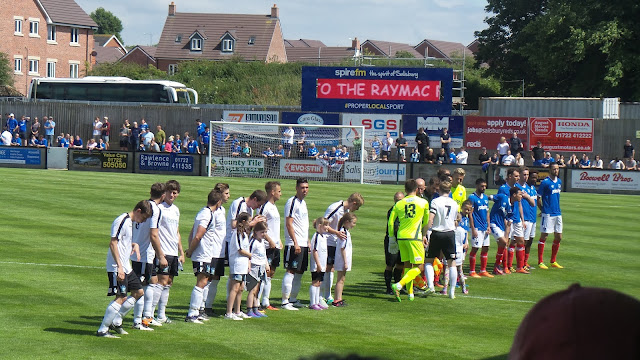 In the days leading up to the game, things at work had calmed down a bit, but I was still glad to have football back and had been looking forward to it for the whole of the previous week. I spent the previous night updating my blog along with a few ciders that my parents had kindly brought me back from the Isle Of Wight. The history of Salisbury was certainly a complicated one, with several periods of financial instability, as well as a lot of periods of success. On the day of the game, I woke around 5 am and despite hoping for a lie in, couldn't get back to sleep. After getting ready and doing various things to kill time, I left at 10.30 as I wanted to go to a few shops before meeting Anwar. Crisps and drinks for the game purchased, as well as some cider for later and we were on our way. The journey took around 2 hours, with us getting to Salisbury at 1.30 There was nothing around the ground, so we went straight in and I went up to the bar for a pint of Strongbow Dark Fruits at £3.50 I then went in search of food, but it was very basic with only Sausage rolls and pasties. I was glad of the crisps I'd bought in and wished I'd done the same with a can of cider to save cash. There was a barbeque but I really fancied some chips. There was still plenty of time until kick off, so I sat and chatted to Anwar and his son Hitcham while we waited for the game to start. Subjects of discussion then and also on the journey included Wycombe's lack of friendlies, lack of signings and the disgraceful decision to move the Coventry away game to the last Friday before Christmas. This meant that I'd be unlikely to go as I wanted to go on the train and do a pub crawl. The evening kick-off made it impossible to get back as the trains stop so early. 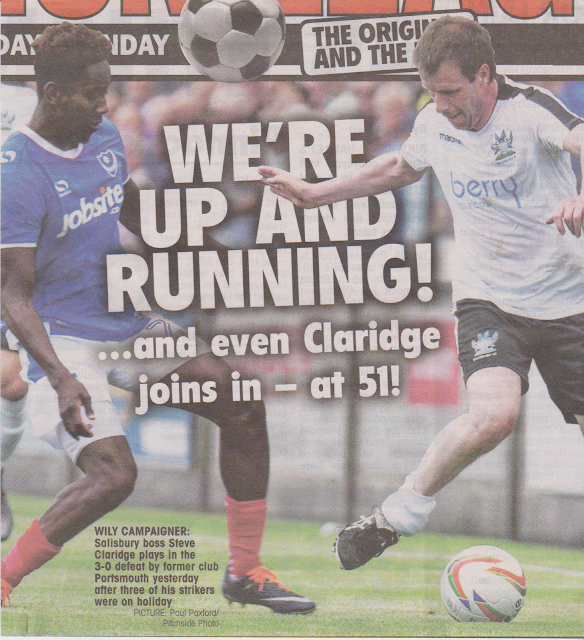 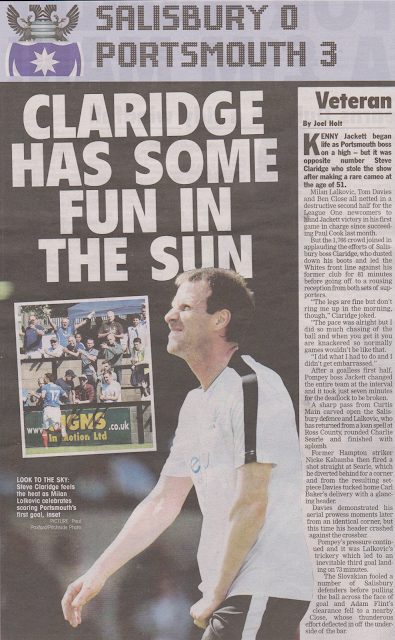 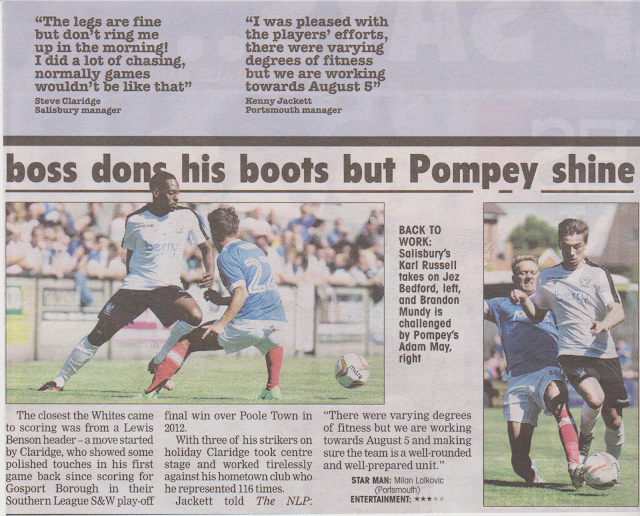 The game started at a pedestrian pace as you would expect for a pre-season friendly. It was goalless at the break but the game livened up in the second half. Milan Lalkovic opened the scoring on 53 minutes, capitalising on a good through ball to finish a low shot from close range. Tom Davies glancing header from a corner doubled the lead on 63 minutes before a real beauty from Ben Close wrapped the game up on 75 minutes. It was an early goal of the season contender as the shot from around 20 yards flew into the top right-hand corner. Salisbury for their part played well and were unlucky not to get a kinder scoreline, but in the end, fitness told. They included a couple of ex-Wycombe players - one of our worst players ever Stuart Green had a fairly solid game. The real star of the show though was Steve Claridge who at the ripe old age of 51 managed 80 minutes, showed some good touches and was the hosts best player. The attendance was an impressive 1,766 with a good number from Portsmouth, including their famous fan, John Westwood. We left promptly and after dropping Anwar and Hicham off at 6.40, I was back home shortly after 7 PM. I had a couple of ciders while typing up my blog as well as chatting online. I was in bed watching TV by 10 pm, not really looking forward to the 4.10 alarm for work in the morning. 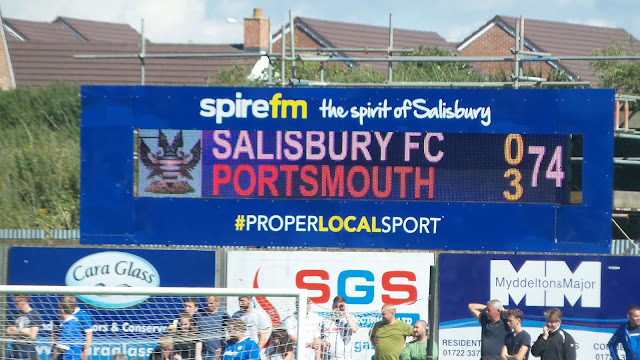 
THE RAYMOND MCENHILL STADIUM is a smart but compact ground that opened in 1997. The main stand is situated on the same side as the turnstiles and holds around 250. In addition, there are a couple of stands on the far side which hold the same amount. The biggest area of cover is the terrace which fills the whole of behind one goal, plus some of the other side. There is enough space for around 1500 fans here. The rest of the ground is open terracing, with a physical capacity of 5000, but the official capacity is 4000.

The ground is in the middle of nowhere, surrounded by a housing estate and the only local facility is a Co-Op convenience store. There is a small club shop at the ground, selling a range of souvenirs. The tea bar is standard football fare with nothing to write home about. The bar is above average, there are two of them. The one in the ground offers views of the pitch, has two ciders on tap (Strongbow Dark Fruits and Symonds) though I'd prefer a local real one. There is real ale available however, prices are average for a clubhouse at £3.50 a pint.

4: Value for money
Average for this level (5)

9: Bar / Clubhouse
Above average, spacious and had TV and decent range (7)

10: Club Shop
More than most at this level, but nothing special (5) 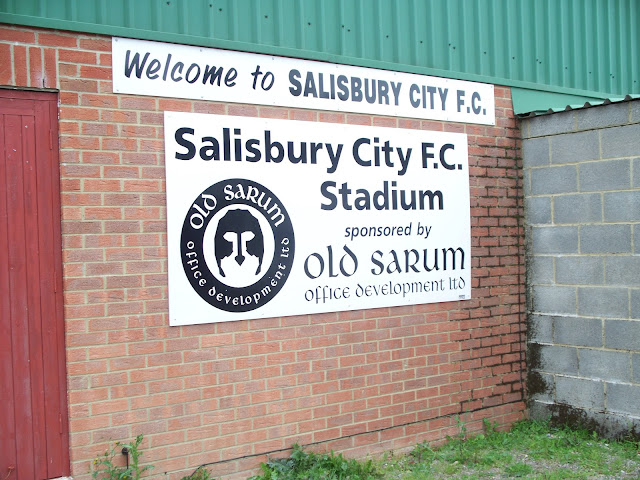 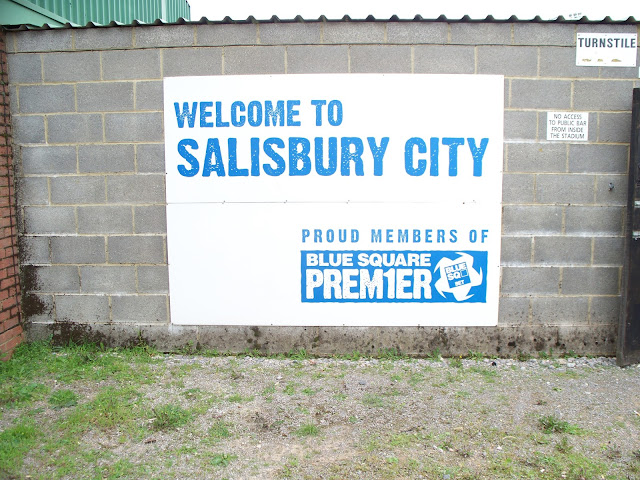 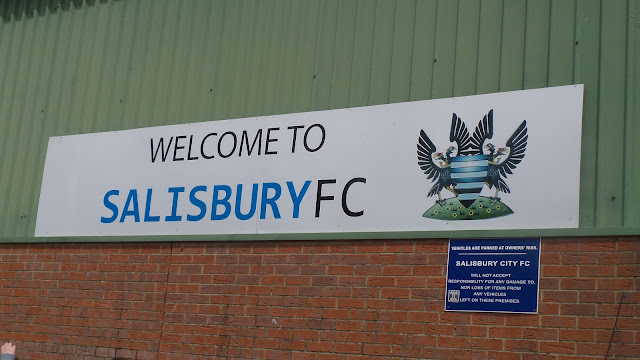 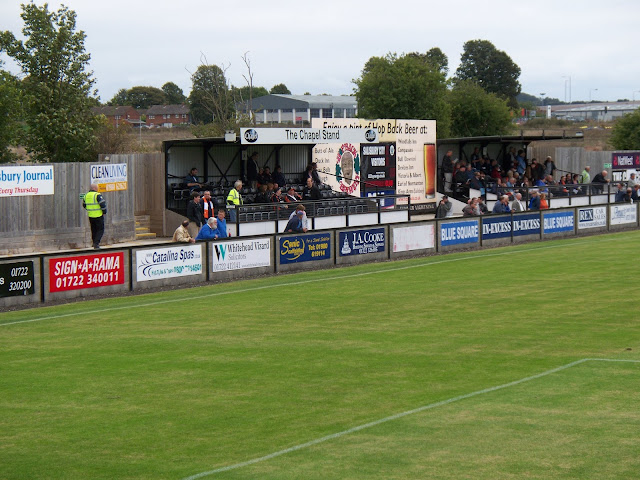 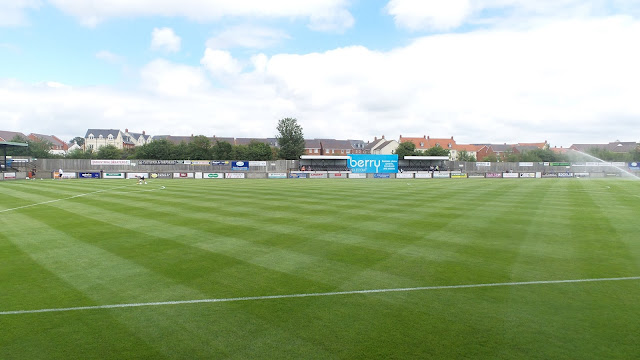 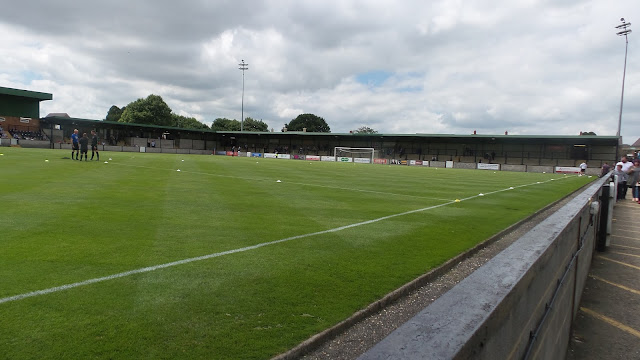 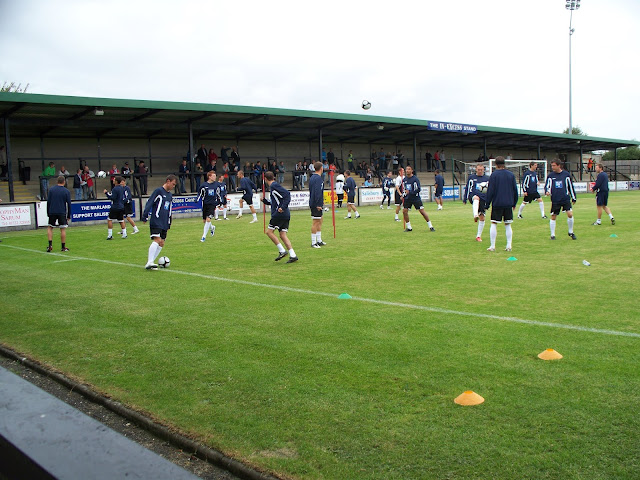 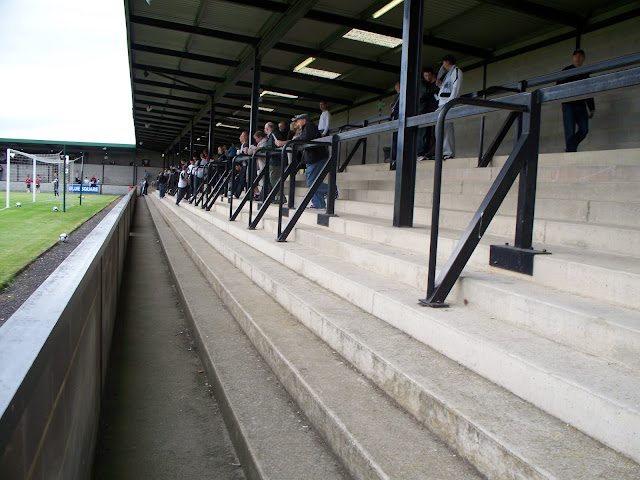 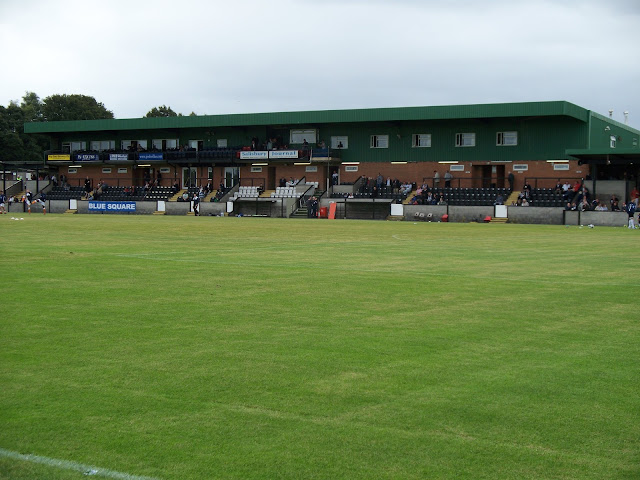 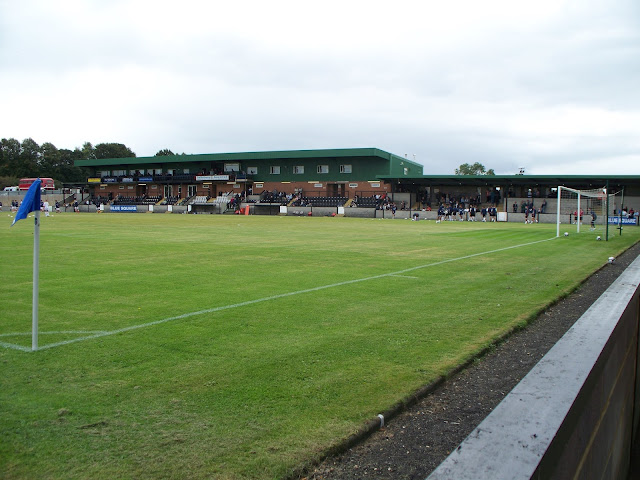 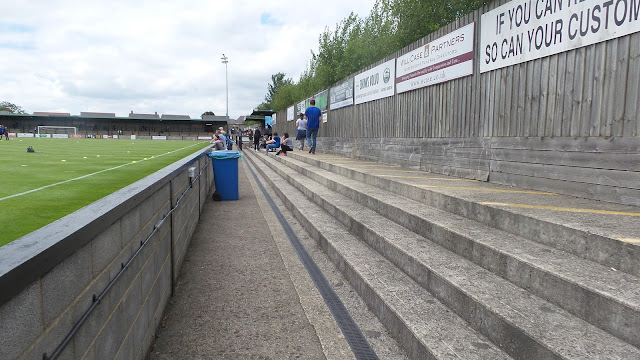 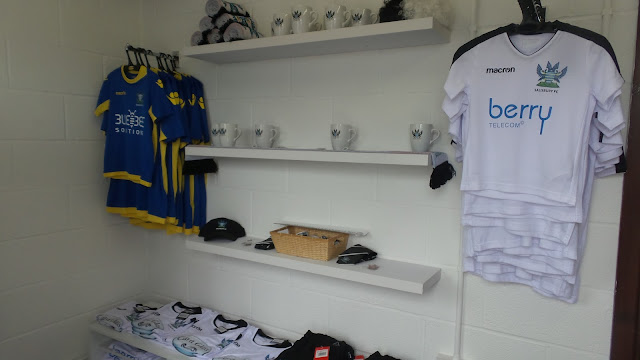 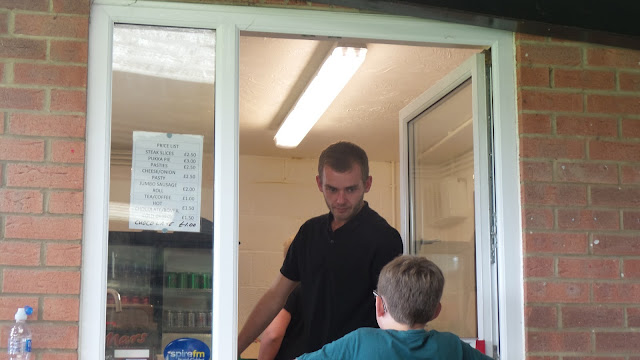 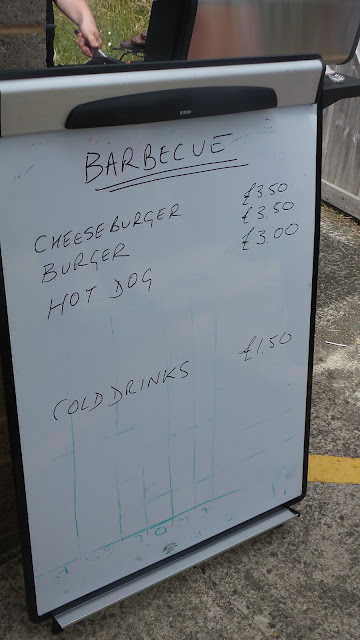