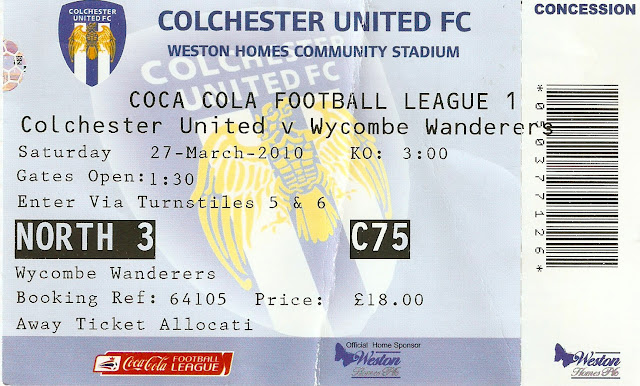 2:  In 1950, Colchester United were elected to the Football League. Aside from two seasons in the early 1990's where they dropped down to the Conference.

3:  It was during this time that they developed an intense rivalry with my own team, Wycombe Wanderers. You can read more about it HERE but after finishing runners-up in their first season, Colchester won the title on goal difference after both they and Wycombe finished on 94 points from 42 games.

5:  There have been a number of FA Cup runs, not least in 1971 when they reached the Quarter Finals. After beating Ringer, Cambridge United, Barnet and Rochdale, they faced Leeds United in a famous 5th Round game. Ray Crawford was the hero as 4th Division Colchester's 'Grandad's Army' toppled the mighty Leeds United 3-2. They would go on to lose 5-0 at Everton in the Quarter Final.

6:  A few years later in the 1974/75 season, Colchester also reached the League Cup Quarter Final. Oxford, Southend, Carlisle and Southampton were beaten before a narrow 2-1 defeat to Aston Villa.

7:  In 1992, the FA Trophy was won at Wembley Stadium as Colchester defeated Witton Albion 3-1 at Wembley Stadium to complete the non-league double. The Football League Trophy Final has also been reached - losing to Carlisle on penalties in 1997.

8:  In the early 1990's, Colchester's biggest rivals were Wycombe Wanderers after a close battle in the Conference. This died down after a long spell when the clubs didn't play each other in the 2000's and now the main rivalry is a local one with Southend United.

9:  Famous Colchester fans include BBC DJ Steve Lamacq who has been a season ticket holder since 1982.


Colchester United left their ramshackle Layer Road home in 2008 for the brand spanking new Community Stadium. Their old bitter rivals Wycombe did not visit in the first season, but after promotion, it was decided by the fixture planners that it would be late March before the Chairboys visited.

I had decided to go with the Independent Supporters Club for this game, as they always stop at a decent pub, and there was nothing around the ground. Situated off a dual carriageway, near an industrial estate, the nearest pub was miles away. We set off in good time around 11 am and eventually got to a pub in a nearby village, just before 12.30. The pub we stopped at last time I went with them was fantastic - good, but unspectacular food at reasonable prices, and best of all a homemade cider - though at 9%, it was best to go easy! This time however, proved to be one huge disappointment. The only food available was a Sunday Roast carvery - on a Saturday so it would be like groundhog day tomorrow, food wise. For £8, all you got was one plateful. A small piece of fatty meat, a Yorkshire pud, and some veg (which I don't like much) I tried to go up again to get some more meat, but they said I would have to pay again, even though I took away less than half a plate, the first time. So one bad mark for being so lazy as to offer just one choice, another bad mark for offering rubbish portions. And a hat-trick completed for doing a lousy selection of cider - think it was just Bulmers. I was glad to get out of there and to the game as it was the worst pub I'd ever been to and I'd give it a good kicking on Trip Advisor if I remembered its name 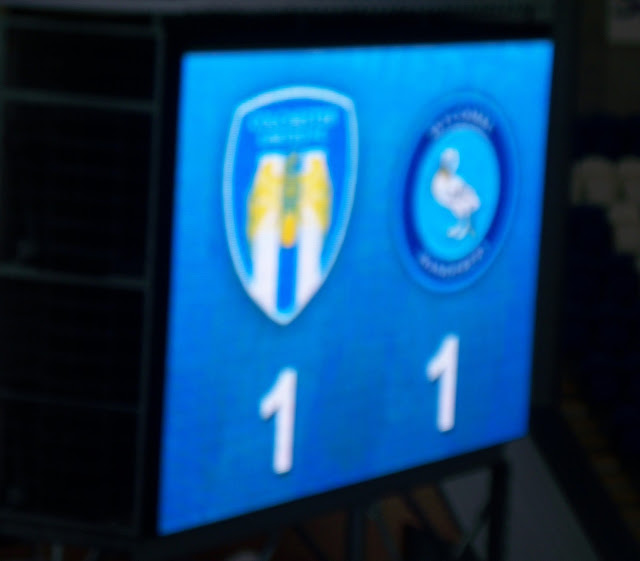 We got to the ground, just after 2.30 and went straight in. I saw that Colchester had got Kingstone Press on tap under their stand, also the food was better than the pub too, even though it was the generic stuff you get at all football grounds. The match itself was a fairly entertaining affair. Goalless at the break, Colchester drew first blood just after the interval with Ian Henderson scoring. Wycombe had to wait until the 90th minute for their moment. Matt Phillips' corner was bundled over the line by Gareth Ainsworth, amid claims from the home side that he had used his hand. Did he? Most likely, but, hey, who cares. Sadly this point was not enough to aid Wycombe's escape from relegation, and they went down with a game still to play. 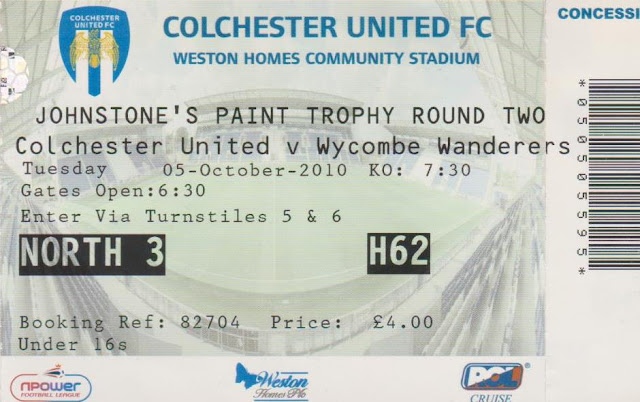 Just a few months later, the two sides were drawn together in the Football League Trophy, back in the days when it was a worthwhile competition. This time, I don't recall there being a coach, so myself, my mate Paul and a couple of other mates drove down. We stopped at a few grounds on the way down - back in those days, I wasn't a groundhopper and only really wanted pictures of places. I also had a fairly partisan take on the town centre, where we stopped on the way to the game, recalling it as dull. Now that I've got into good pubs more, I can see that it has a number of pubs well worth visiting, especially the Victoria. 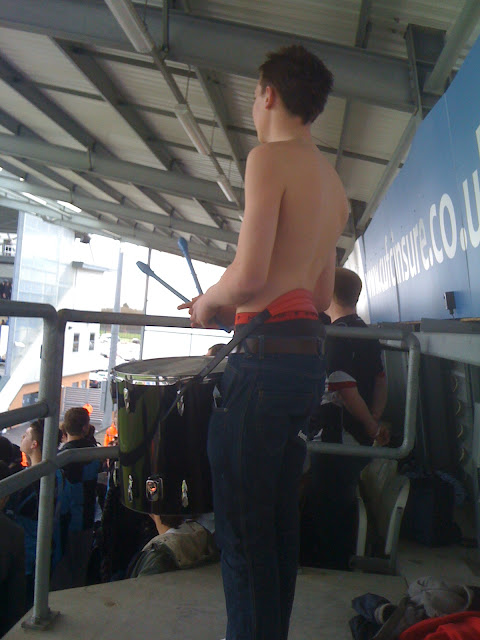 We must have got to the ground just after 6, paying money to park in the official car park. It was a fairly poor pre-match again and these days my planning would be a lot better. By this time, Wycombe had dropped down to League 2, while their old rivals remained in League One. Despite the league difference, Wycombe would eventually come away with a 2-0 win. Both sides had 5 changes from their sides at the weekend and perhaps that's why it was goalless at the break. Wycombe left it until 75 minutes to score their first goal, Kevin Betsy chipping keeper Ben Williams after a flick on from Matt McClure. Scott Davies made it 2-0 on 81 minutes from the rebound after Ben Strevens' initial shot was saved to complete a great night, football-wise, at least. 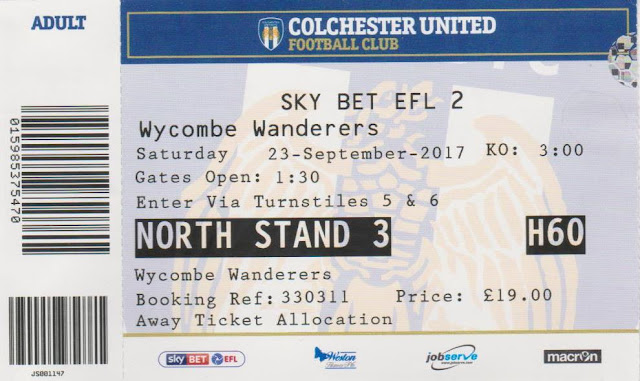 I'd planned this trip as one to go to back when the fixtures came out in June. I was aiming to visit all the grounds that I'd not been to in a while so that I could update my blog. The original plan was to do the game by train and go to some pubs in Colchester. There was a cracking looking one called The Victoria which I'd wanted to visit for a while. However, the train was pretty expensive, even in advance, plus there was the inconvenience of getting to the station and then the ground. So after biding my time and checking what pub the Independent Supporters Club were stopping at, I chose to go with them. Although our stop in Stanway was nothing amazing, it did promise a real cider and had a menu at reasonable looking prices. Plus it picked up a few minutes from my house and was a lot cheaper at £17, so using it was a no-brainer as long as the pub was decent. 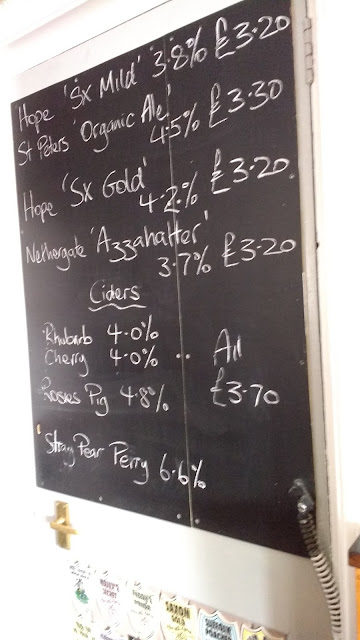 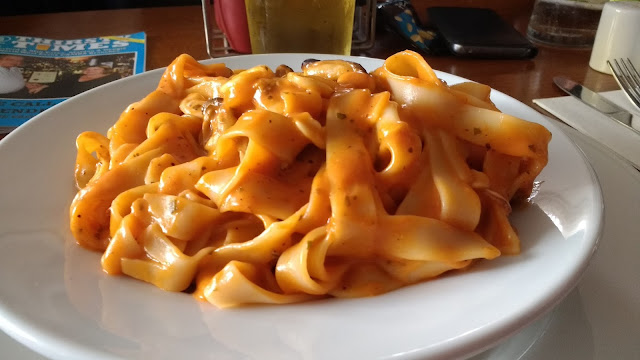 The night before the game I had a late night after football at Bilborough and didn't get to sleep until 2.30 am. I still got a reasonable sleep before waking at 9 am though and after having a quick wash and getting dressed, I had a southern fried chicken burger for breakfast. I left home at 9.35, jogging down the shops to get a paper. 15 minutes later I met my parents to get the coach. The journey there went nice and quickly with me reading my paper at first and then listening to the first hour of The Two Mikes. I was exceptionally grateful to my parents for paying my coach fare and ticket as I've had an expensive time recently. I pre-ordered my lunch, unusually opting for a healthy option of seafood tagliatelle. We got to the Live and Let Live in Stanway at 12. The cider selection looked great looked decent but there was initial disappointment when my priority tick of Stray Pear Perry had sold out. There were still a few to try from the Dengie Cider Company though and I started off with a light cherry one which was pleasant enough. Then it was their medium dry which was brilliant. The barman warned me that it was very dry, but that was perfect for me. Lunch was good too, a huge portion of pasta which helped soak up all the cider. I had subsequent halves of Dengie Rhubarb and Weston's Rosie's Pig before we left at 2.15. The visit was capped off by seeing a lovely friendly dog before we left, who lapped up the attention from lots of tipsy football fans. 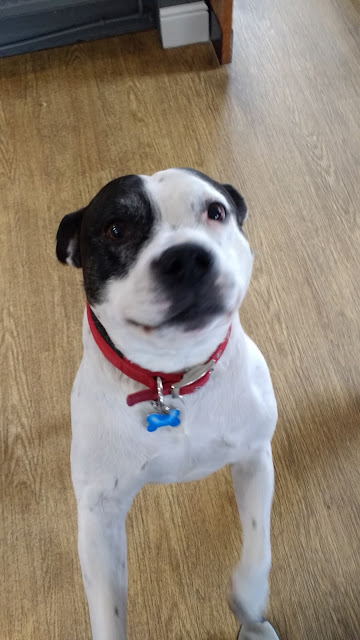 The team selection was a decent one for once and I was hopeful that my sweepstake picks of 2-1 and 3-2 victories for Wycombe would come to fruition. Pre-match had a good atmosphere and got me in the mood as I got into the ground just after 2.30. Wycombe started well and were ahead on 32 minutes. Craig Mackail-smith's powerful shot was parried and Nathan Tyson followed up with a header from point-blank range. Typically, Wycombe couldn't hold onto the lead and Colchester were level before the break. The defence took their eye off of the ball and Brandon Hanlan, on loan from Charlton, nipped in to equalise. We rode our luck in the second half with Scott Brown having his best game in a Wycombe shirt and pulling off several good saves. The Chairboys got the winner on 67 minutes when Scarr headed against the post from a Joe Jacobson free kick and Craig Mackail-Smith followed up. It was tense but we held on. 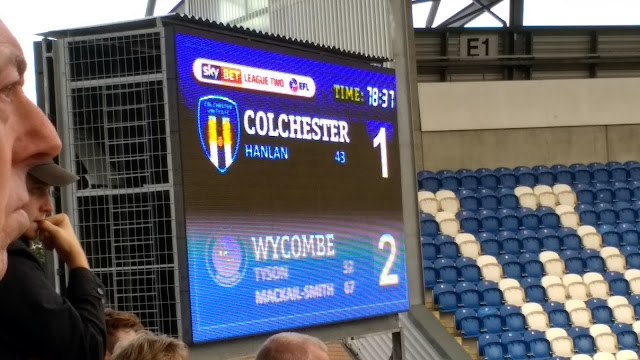 There were a few scuffles between opposing fans at the end, but I was soon safely back on the coach. I picked up my tenner winnings on the sweepstake and listened to various phone-ins on the way home. I was glad to get home around 7.30. It was the standard Saturday night ritual of chatting online until Match Of The Day came on. I had thought of sacking it off for an early night and doing an FA Vase game tomorrow, but in the end, I'd had a busy weekend and there were plenty of goals in the days' games to enjoy. 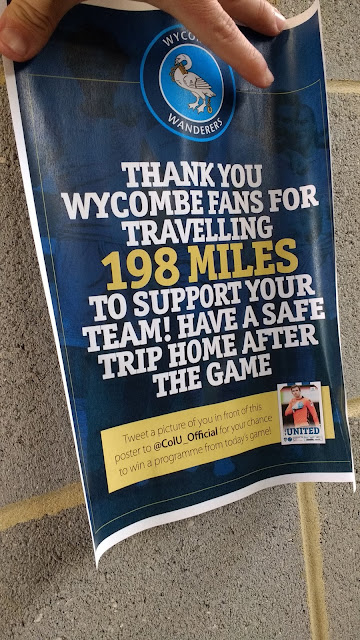 The COLCHESTER COMMUNITY STADIUM is typical of a new build, situated well out of town near a faceless industrial estate. Much like Wycombe's own home in fact. It may be bland, but at least views and legroom are good and you can get a reasonable atmosphere going under the roof. Stewarding is fairly relaxed too. Away fans facilities are restricted to the concourse below the stand, which offers the usual dull range. Therefore, it's probably best to stop en route, if you come by train, the town has a number of decent looking pubs. 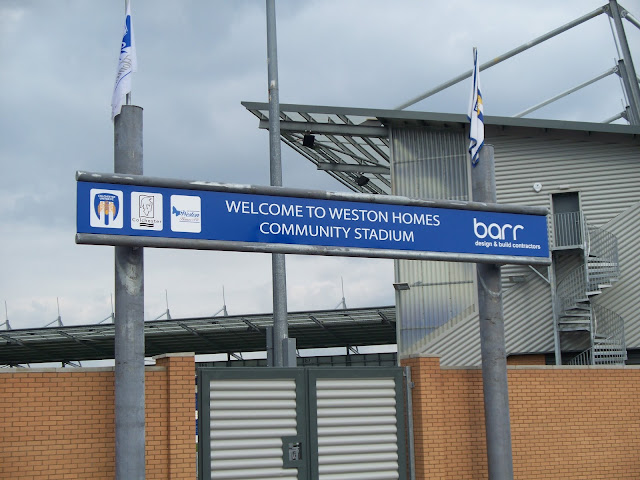 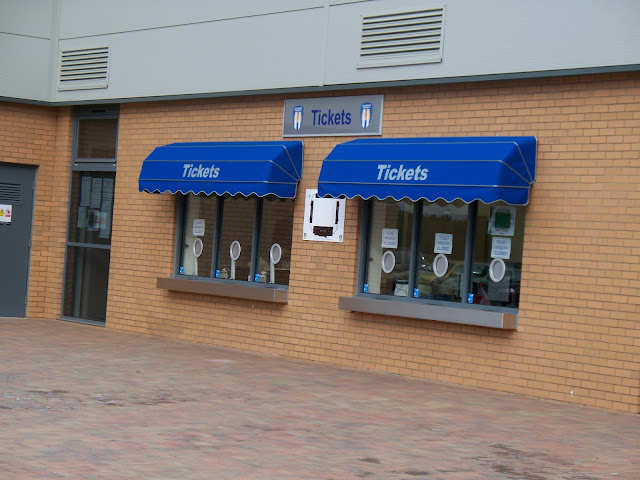 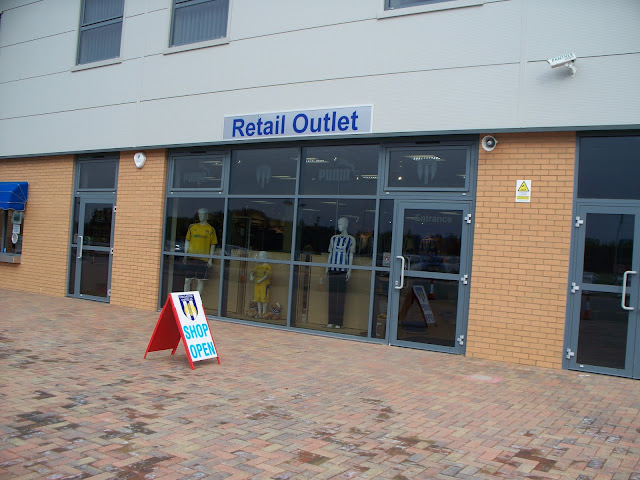 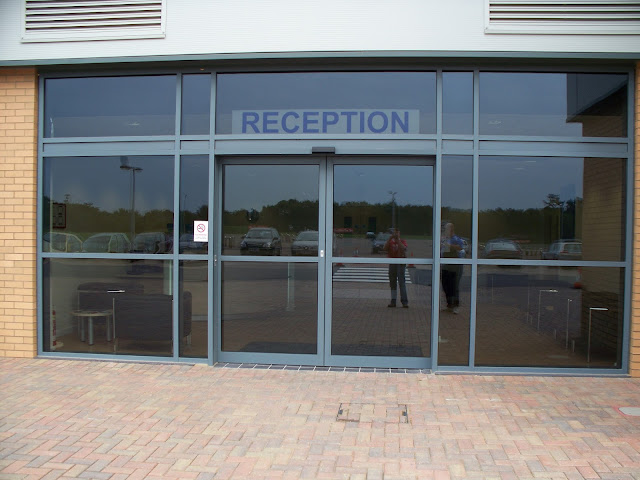 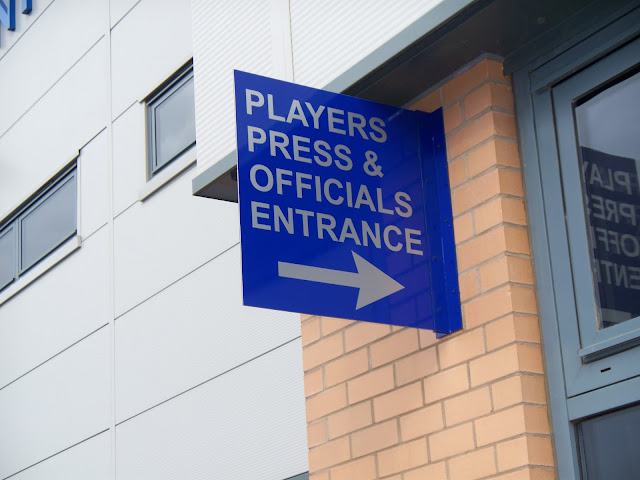 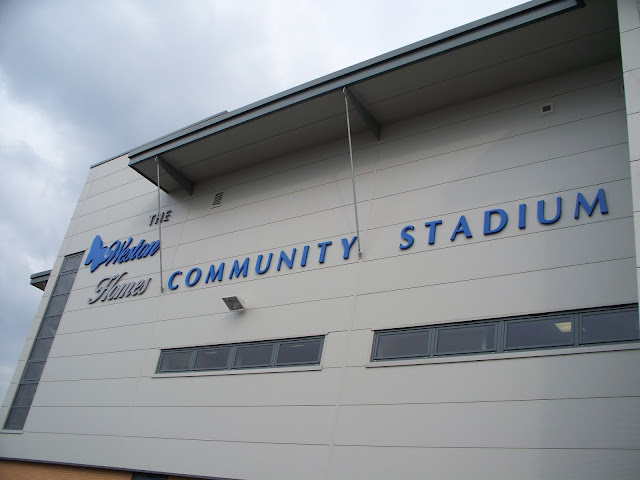 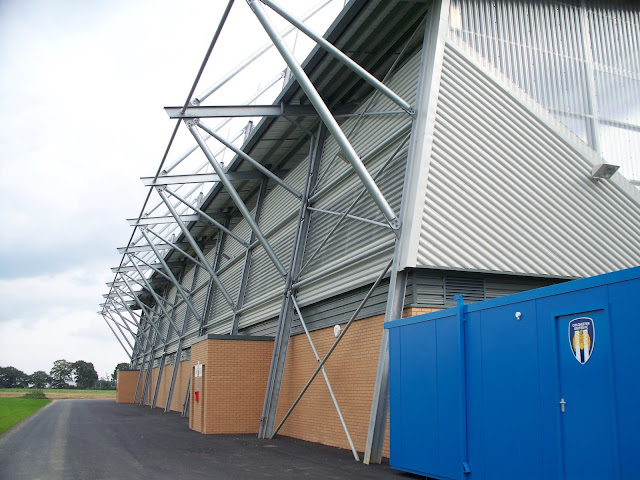 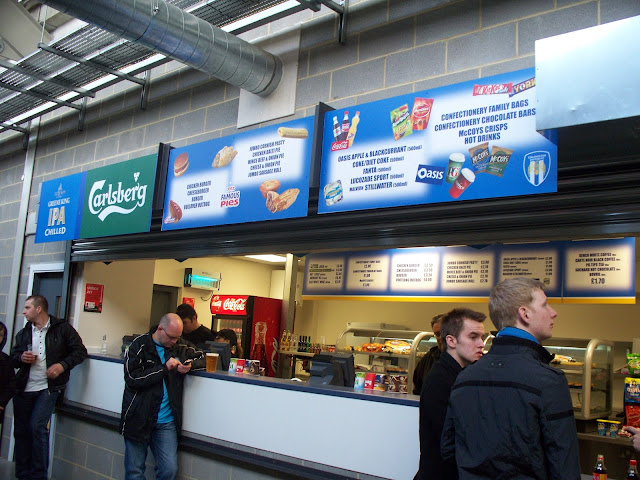 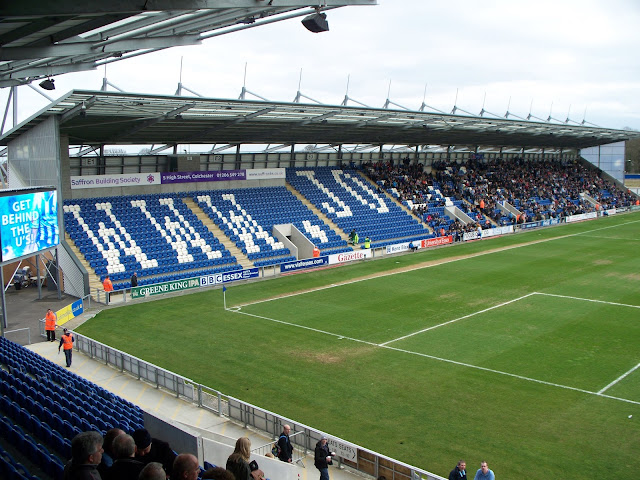 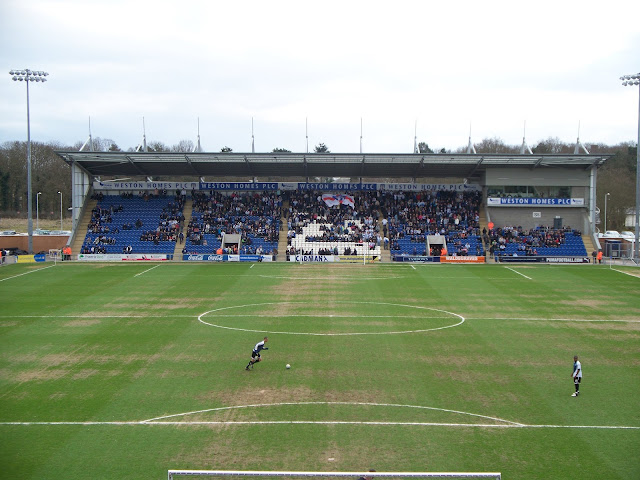 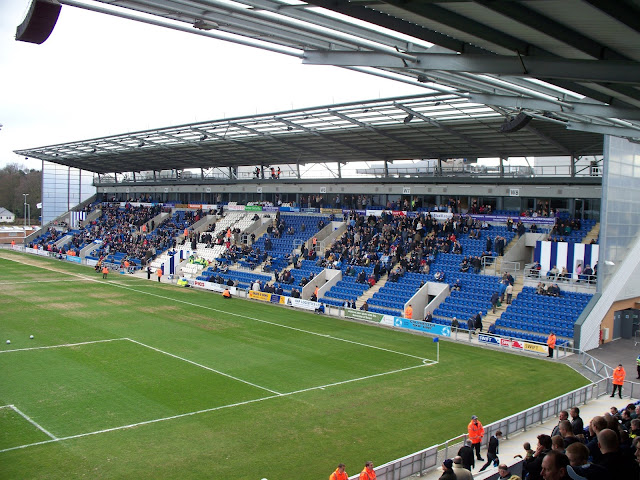 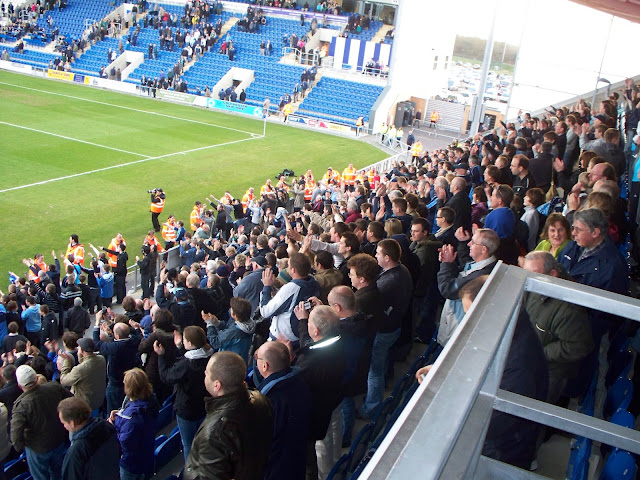