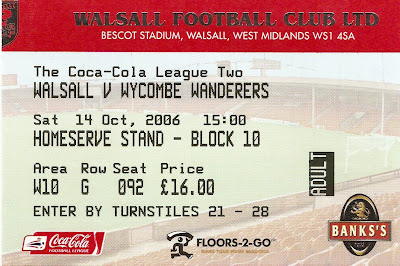 1: The club was formed in 1888 when two local teams - Walsall Town and Walsall Swifts merged. They were known as Walsall Town Swifts up until 1896 when they adopted their present name.

2: They initially played at The Chuckery, moving to the West Bromwich Road sports ground in the 1890s. They only played there for a few years before moving to Fellowes Park. This was their home up until 1990, when they moved to their current home, The Bescot Stadium.

3:  Walsall have had two spells in the Football League. They were founder members of the 2nd Division in 1896, staying until 1901 when they finished in a relegation spot and were not re-elected. Their second spell started in 1921 and they have remained members ever since. Their best ever finish was 14th in the second tier in 1962.

4:  During their exile from the Football League, Walsall played in various non-league divisions, such as the Birmingham, Southern and Midland Leagues. The best position they could manage was 3rd in the Birmingham League on a couple of occasions. Despite finishing bottom of the Football League on a number of occasions in the early 1950s, they kept their league place as there was no relegation spots at that time.

5:  Their most famous win came in 1933 as they defeated Arsenal in an FA Cup 3rd Round game. They've reached the 5th Round on a few occasions, the most recent coming in 2003 as they lost out to Sheffield United.


6:  In the League Cup, Walsall reached the semi-final in 1983-84. They beat Blackpool, Barnsley, Shrewsbury Town, Arsenal and Rotherham United. Despite managing a draw at Anfield in the first leg, they lost out 4-2 to Liverpool over the two legs.

8:  The club's record home attendance came on 29th August 1961 when 25,453 saw them play Newcastle United. At the Bescot Stadium, 11,049 witnessed their Championship game against Rotherham United on 9th May 2004.

10: A number of players have played for both Wycombe Wanderers and Walsall. Amongst the best are Kevin Betsy, Tommy Mooney, Jermaine McSporran and Chris Westwood. 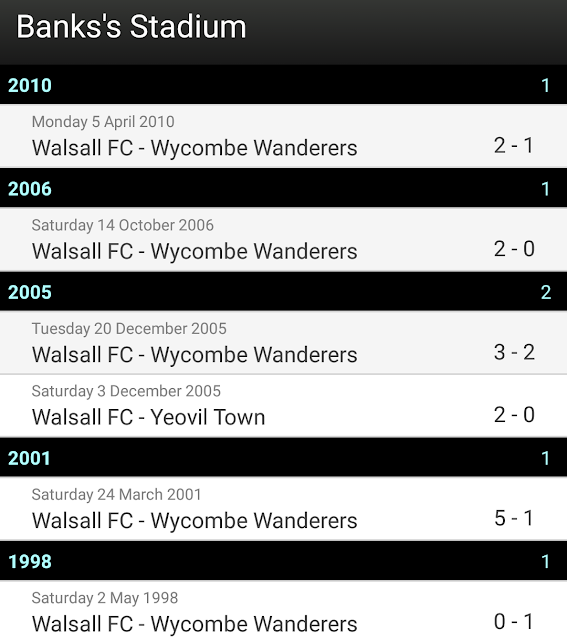 My first visit was in May 1998. Wycombe were just finishing the 1997/98 season, and this was their last game. The Blues had assured safety from relegation a couple of weeks back and had recently announced Neil Smillie as permanent manager, following the departure of John Gregory to Aston Villa. The team were unbeaten in 5 games, despite not scoring many, things had been tightened up at the back. Paul Read made it 6 games unbeaten, his goal ensuring that Wycombe won 1-0 to seal all 3 points. I do remember a couple of things from that day - firstly that Walsall was the first ever club to do Balti Pies (of which I had a few) and secondly. the Wycombe fans doing the conga around the away end, to the bemusement of the home fans and the stewards. 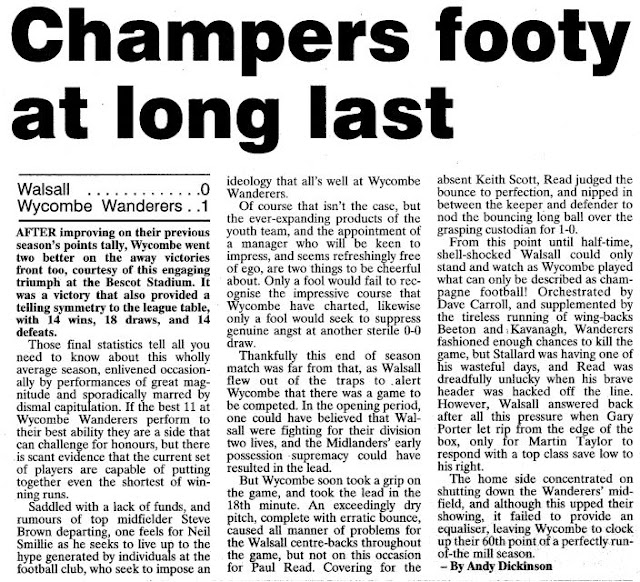 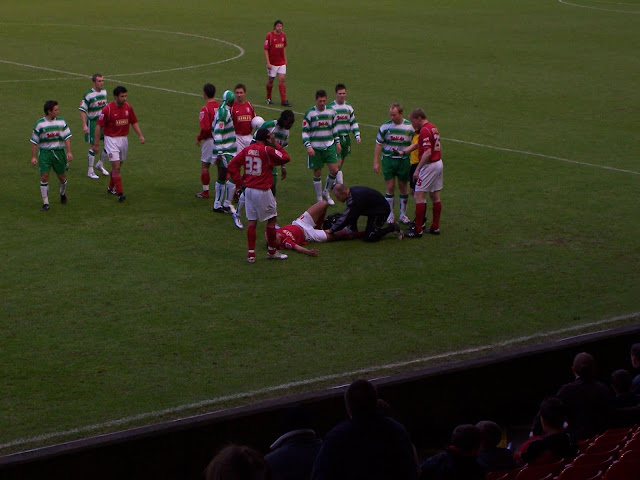 I visited Walsall on 5 further occasions. It proved to be an unhappy hunting ground for Wycombe, with defeats on all four of the occasions that I saw them there. Particularly poor was the 5-1 defeat we suffered in 2001, having just beaten Leicester City to reach the FA Cup semi-final in recent weeks. There was an occasion that I didn't see Wycombe there - that was in 2005 when I watched them beat Yeovil Town 2-0. My mate Paul and I had been heading to Burton t watch their FA Cup game, but it was called off at midday. Not a groundhopper at the time, I stupidly chose this game over an FA Cup game at Nuneaton Borough, missing out on the chance to visit their old Manor Park ground in the process. 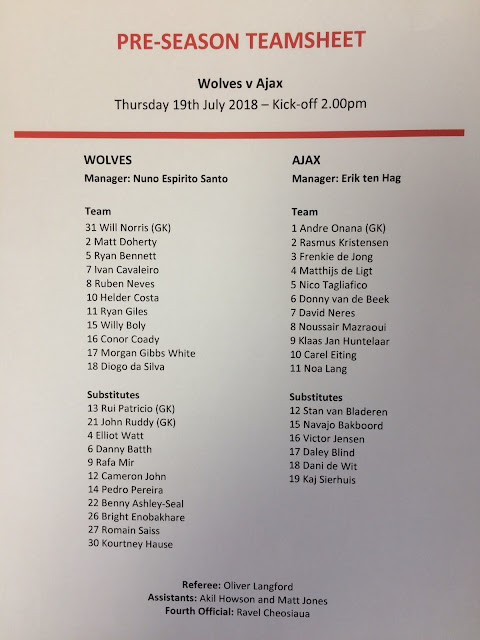 Originally, I was going to make the visit to Walsall to update my blog at the end of October when Wycombe played there. But keen to make the most of my week off, I was happy to see that they were hosting an afternoon game between Wolves & Ajax and better still, tickets were only £6. It would mean I had another free Saturday during the season and would be seeing another game on Thursday evening, having slept overnight in Retford on the previous evening. This took a bit of searching with so many cancellations due to dry pitches, but I eventually found one, albeit a lot further away than I'd hoped. 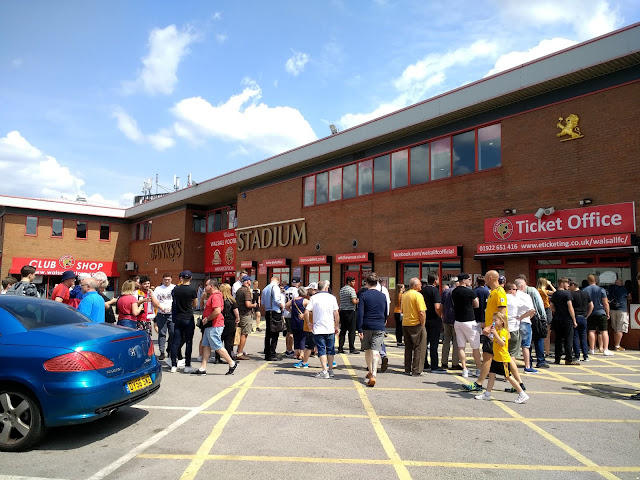 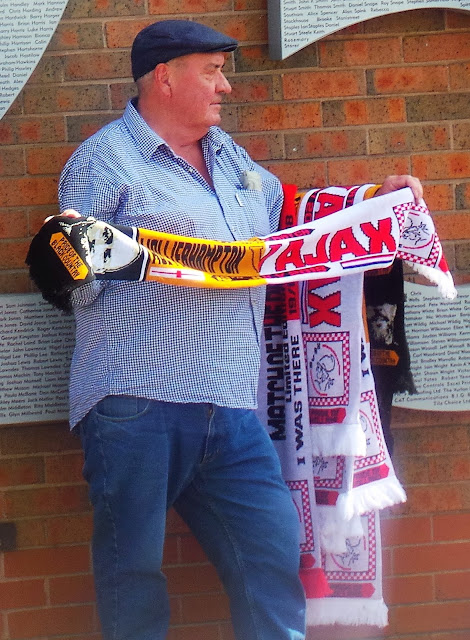 The day of the game came, and despite me camping near Retford, I was unable to break my habit of waking up at my 4 am work time. I went back to sleep for another couple of hours or so before getting up at 6.30. Thirsty and without a drink, I got washed and dressed and walked into town. I got a few bits in ASDA and went in search of breakfast. I fancied a breakfast sub from Subway, but typically for them, they didn’t open until 8.30. My only real option was Greggs, where I had a sausage and omelette bap for £1.90. I walked back to my tent and started editing last night’s pictures on my laptop, at least until the battery ran out. I then typed the rest of it on my iPad, knowing that I had plenty of time to spare. I left around 10.30, stopping at Kirby Town’s ground for pictures. It was a lot better than expected, with a decent sized stand and one that I hope to see a game at in the future. Just near the ground, I stopped at Morrisons, getting some chilli cheese bites and some drinks for the game. It was only a short way to the ground, but it took a while due to it being busy. I was surprised when I got to the ground to be charged £4 parking, as I thought only a few would turn up. I was wrong, the place was really busy and the entire side stand was sold out. I had to get a ticket for behind the goal, which was busy also. There were even half and half scarves on sale too, madness for a midweek daytime friendly. I think the club was as surprised as me to be honest as they had to open the whole ticket office rather than just a couple of windows. 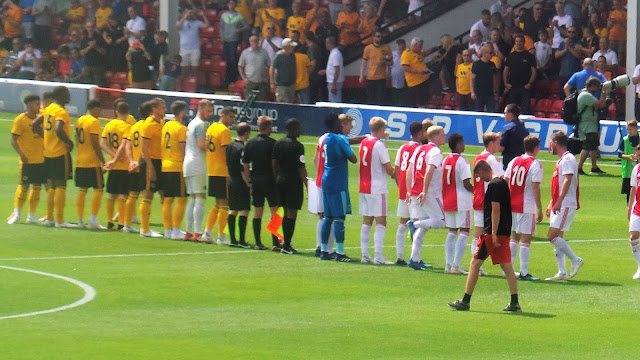 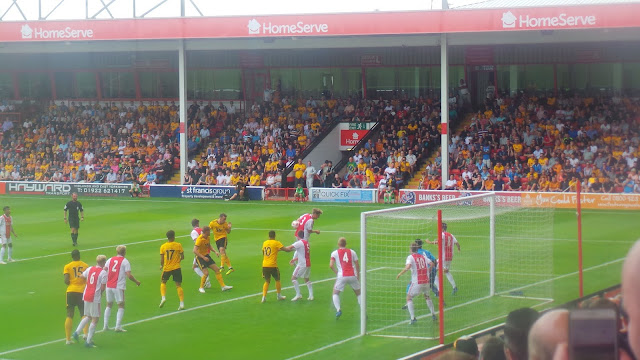 I got in and found that I had a really rubbish seat - right behind the net. Luckily I was able to move to something better, sitting right in the corner. The opening exchanges saw Ajax look the neater side, but Wolves have the better chances. Diogo da Silva had a great chance for Wolves, one on one with Andre Onana, but the Ajax keeper came out and foiled him. Ajax took the lead just before halftime, Donny Van De Beek running into the area from the right and putting a low shot into the bottom left-hand corner from around 15 yards. The second half was pretty dull but Wolves equalised on 74 minutes. A foul in the area led to a penalty being awarded and Noussair Mazraoui stepped up and slotted it in the bottom left-hand corner of the net. Wolves had the better chances from then on, a header from a corner being their best effort, but there were no further goals. The attendance turned out to be 3,328, a lot more than I was expecting. 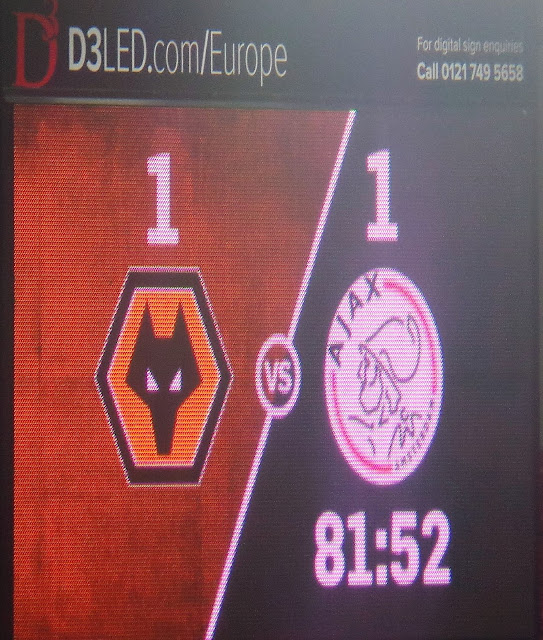 THE BESCOT STADIUM was built around the same time as Wycombe's Adams Park ground. Originally it was a bowl like construction, with all stands the same height - 3 sides seating and 1 side terracing, when I went there in 1998. However, following their promotion to the Championship, the one remaining terraced area was made all-seater, a tier added on top and renamed the Floors-2-Go stand. It is clearly visible from the M6, meaning that the club can gain more than most at their level in sponsorship money. Overall I quite like the Bescot, it's not the most inspiring stadium, but you'll generally get a decent view and leg room.

The tea bar was pretty decent when I visited the first time, although I'm not sure what it is like now. I didn't visit the bar, but I've heard it charges £2 entry. Otherwise, there is a McDonalds, a Morrisons with a cafe and a pub called King George V around 15 minutes walk from the ground as well as various other takeaways. 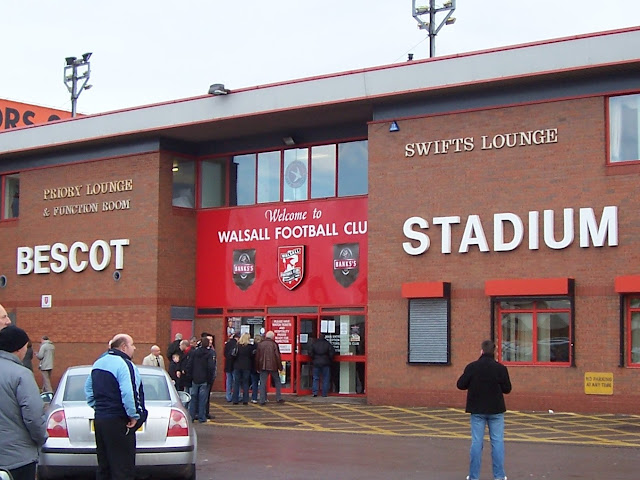 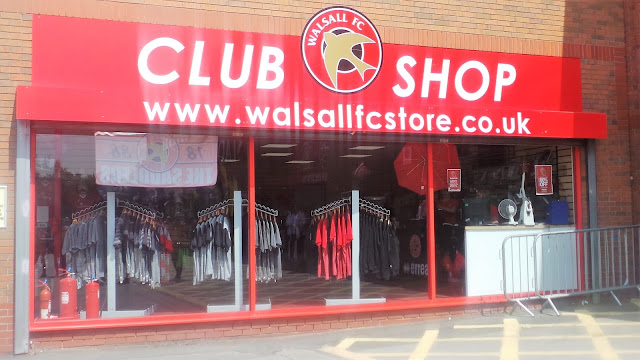 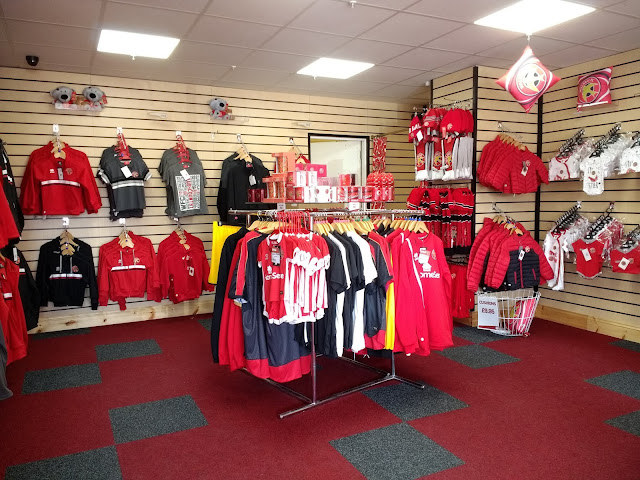 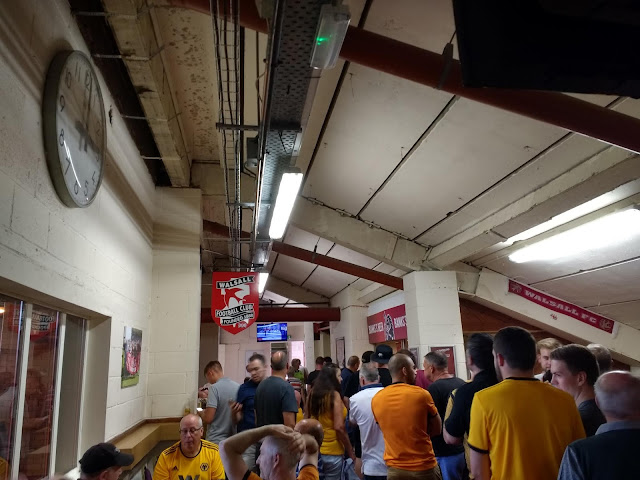 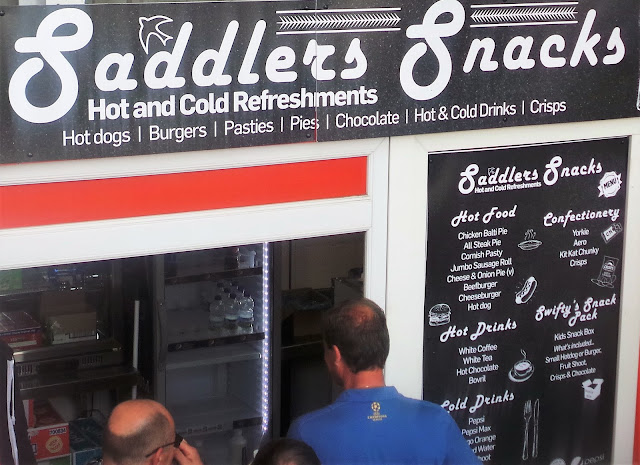 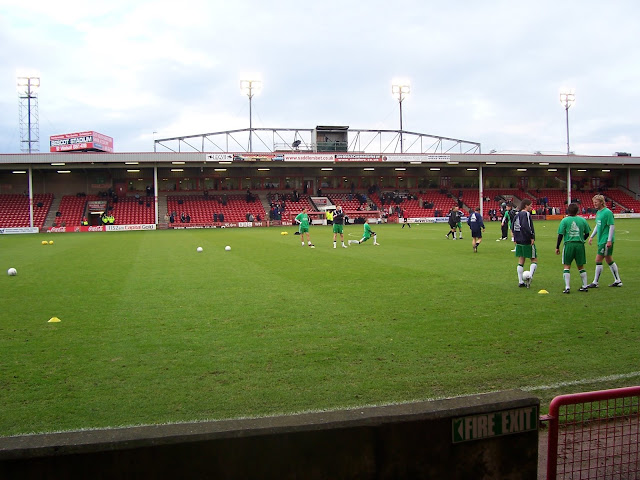 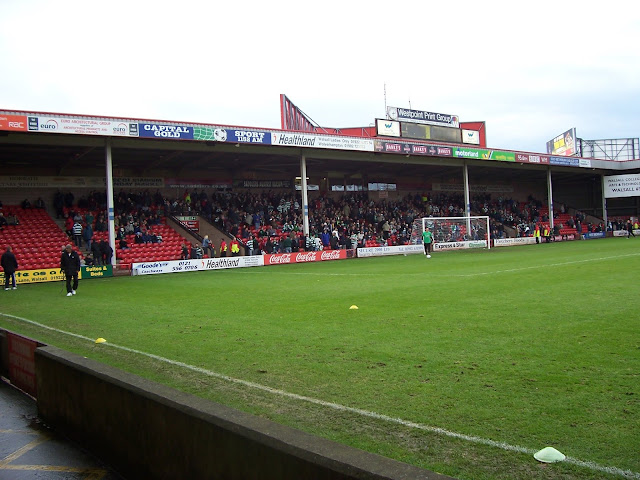 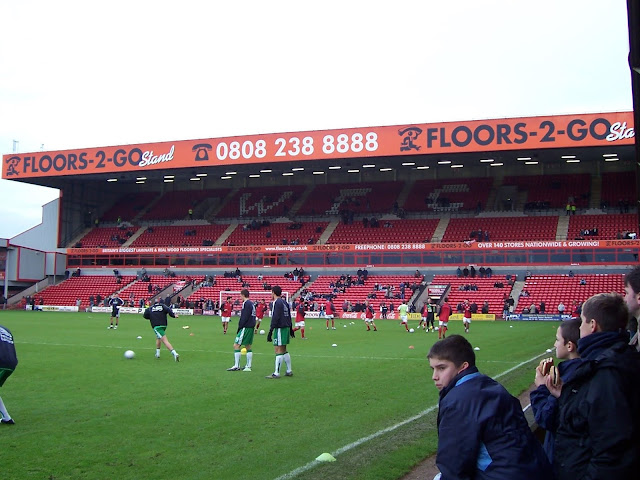 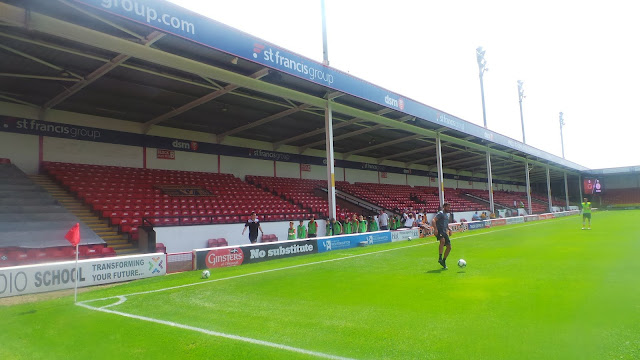