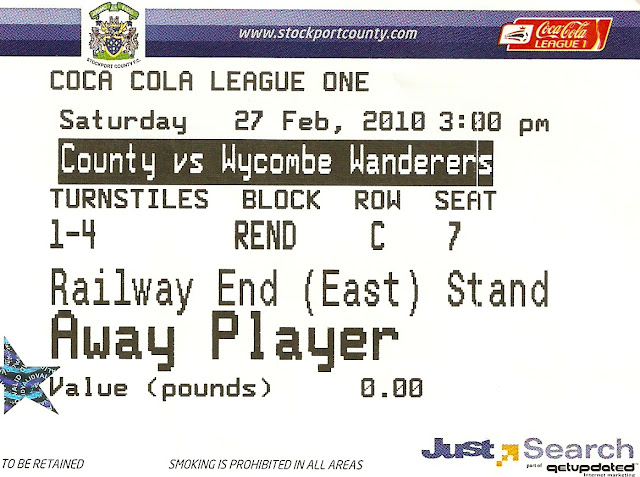 1:  The club was established in 1893 and were initially known as Heaton Norris Rovers. They adopted their present name in 1890. From 1891 until 1900, they played in the Lancashire Combination, finishing second-bottom in their first season and winning the title in their final season.

2:  They joined the Football League in 1900 and remained there until 2011 aside from 1904-05 which they spent in the Midland League after failing to gain re-election after a lowly finish. Their best finish in modern times came in 1998 when they finished 8th in the second tier.

3:  Financial difficulties saw an alarming tumble down the leagues. Two rock-bottom finishes in 2010 and 2011 saw them drop from League 1 to the Conference and a couple of years after that they dropped into the Conference North. Their first season here saw a 14th place finish, but gradually they've recovered. After losing to Chorley in the playoffs in 2018, they were champions last season, winning promotion into what is now known as the National League.

4:  Stockport County have twice reached the FA Cup 5th Round - losing 2-1 at home to Liverpool in 1950 and 4-0 at Tottenham Hotspur in 2001. In 2007 they went out to non-league side Staines Town, losing on penalties after a replay.

5: In the League Cup, Stockport County reached the semi-final whilst still a third-tier club. Chesterfield, Sheffield United and Blackburn Rovers were beaten before they faced up to Premier League side West Ham United in the 4th Round. The result went to a replay and a bizarre own goal from Iain Dowie and a Brett Angel header gave the Hatters a famous win. Southampton were also beaten after a replay before a narrow defeat over two legs to Middlesbrough in the semi-final.

7:  The club has played at Edgeley Park since 1902 and have built it up to suit their needs. Rugby team Sale Sharks played at and for some time owned the ground. There have been a couple of possible moves away - in 2002 there were rumours of a move to Manchester City's Maine Road, prompting fan protests. There were also rumours of a move on 2012, but they were dismissed by the then chairman Lord Peter Snape who sounds a bit like a Harry Potter villain. Since 2015, the ground has been council-owned, with County enjoying a more favourable rent compared to previous years.

8:  The club has often struggled to attract support, with many local people choosing to support Man United or Man City. They played home games on Friday nights for a period, enjoying increased crowds. They played in the same division as City for five years, but more traditional rivals have included Oldham Athletic, Bury, Rochdale, Crewe Alexandra and latterly Macclesfield Town.

9:  Stockport County's most successful manager, percentage-wise, is Marcus Rashford. Not the current Manchester United player of course, but his namesake who managed the side between 1926 and 1931 with a 57.9 per cent win rate. Other records include a 13-0 win over Halifax Town in 1934, also a Football League record and a record attendance of 27,833 for an FA Cup game against Liverpool in 1950. Conversely, serious crowd trouble saw a game moved to Old Trafford in 1921 and just 13 fans paid for entry to their game against Leicester City as many had stayed over from the Manchester United game, played a few hours earlier.

10:  The town of Stockport has a tradition of hat making, hence the team's nickname of 'The Hatters'. It has a population of around 136,000. Famous people from the town include actress Michelle Keegan, tennis player Fred Perry and boxer Ricky Hatton. 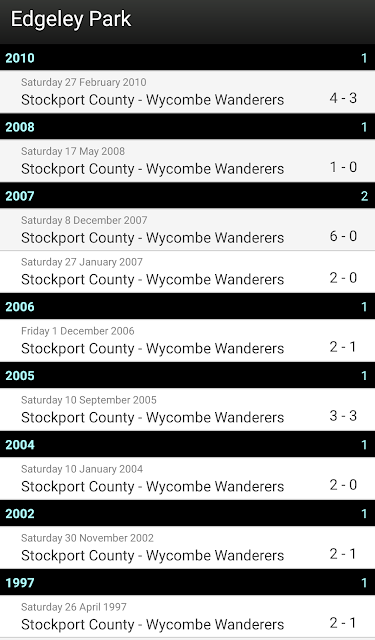 Wycombe Wanderers have an utterly dismal record at Edgeley Park. It reads P12 W0 D3 L9 F11 A29 - garnering three out of a possible 39 points. I have been to 9 of these, missing a 4-1 defeat when tall striker Kevin Francis tore our defence apart, and 1-1 and 0-0 draws. My first visit was in April of 1997. Wycombe could guarantee staying up that day if results went for them, even if they lost. Which was just as well, as Stockport were league leaders that day, and deservedly so. Packed full of great players like Paul Jones, Alun Armstrong, Chris Marsden and the like, most of which would go on to play at a higher level. I'd say they were the best team I have seen league wise in all my time of watching Wycombe. That day, I made my way up on the Independent Supporters coach, which by now were offering a stop at a fairly decent pub on the way up. As the motorway had been well behaved for once, we arrived well in advance and as a consequence had a lot of time to drink. Being younger, I used to drink a lot faster. I think I must have got through 5 or 6 pints. When I've had a few, I either get pretty sleep, so I spent most of the game nodding off in the stand. Maybe it was a good thing, as per usual we didn't play that well and spent a lot of the game under pressure. 2-0 down at half time, was not the result we needed, but other matches were still goalless. County's goals were scored by the blond-haired Armstrong, who would later go on to play for Middlesbrough and by an own goal from Wycombe's Michael Forsyth. 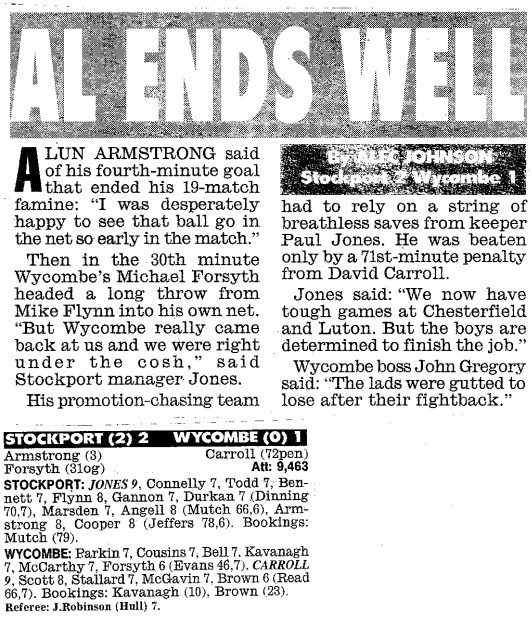 The second half continued in pretty much the same fashion, though Wycombe were starting to make some chances at last. They got a goal back through a Dave Carroll penalty on 70 minutes and Stockport faced a nervy final 20 minutes as Wycombe pressed for an equaliser. Great news for Wycombe came through from elsewhere while all this was happening. Preston were winning at Shrewsbury, the Shrews being one of Wycombe's rivals for relegation. So if the results stayed as they were, Stockport would be champions and Wycombe would be safe. This is how it turned out to be. At the final whistle, the Stockport players came and applauded the away fans and shook hands with us. Whether this was intentional I never will be sure, as the away fans had a different area to usual, to allow more space for the Stockport promotion party. Whatever, it was a nice touch. I was still feeling a bit groggy then, but still enjoyed the occasion, we were staying up after all. 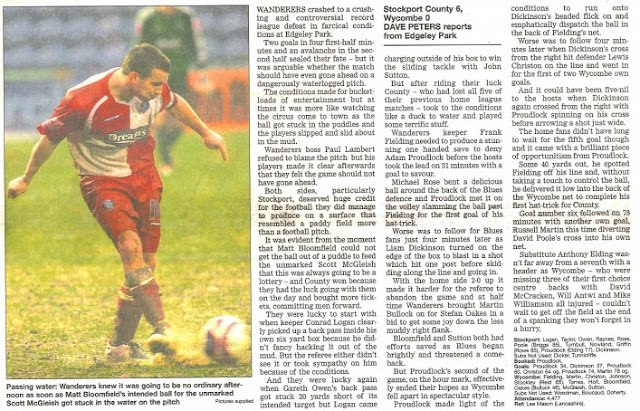 Subsequent visits proved less happy. A 6-0 defeat in the driving rain in 2007 was no fun, the manager's head was even called for by some fans, despite us reaching the Carling Cup Semi-Final less than a year earlier! Another notable visit was in the playoffs the next year. A couple of Swedish girls decided to go completely loopy and play "chicken" with the traffic on the M6. This resulted in the delay of most of our fans until half time. I was sitting smugly in the local pub at the time, watching the FA Cup Final and reading all the irate text messages and Facebook statuses about being stuck. It made a rare change, usually, I would have been in the traffic jam with the rest of them, I just got lucky that day. 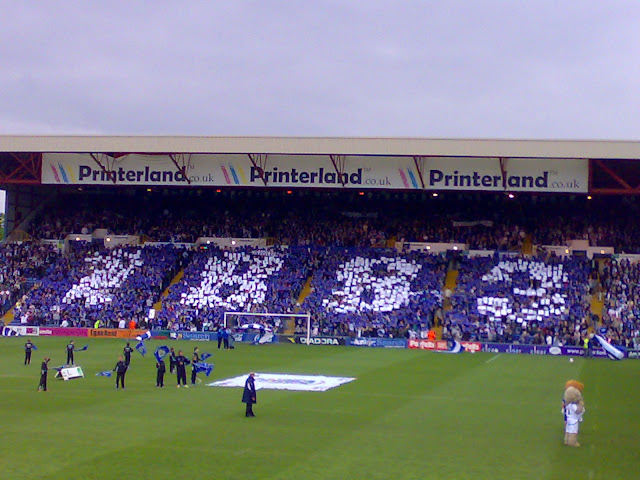 From my game at Stockport Sports Village, I walked to the bus stop and got the bus into Stockport. After a look around the shops and a steak baguette from Greggs, I commenced my pre-match pub crawl. First up was the Petersgate Tap, a lovely micropub where I had a pint of Mad Hatter Nine Holes, a delightful local cider. It was then a ten-minute walk to the Railway, a really traditional place where I had a pint of Sam's cider. I ordered my ticket online as the club had tweeted that they were having issues with card payments. It was just as quick to walk as to get the bus, so I headed towards the ground, getting some salt and pepper chips from a takeaway called Wang Wang along the way. My pub crawl was cut short as the Alexandra didn't do real cider as advertised, so I was in the ground at. 7.20. The DJ was playing some great tunes from Mancunian artists pre-match. 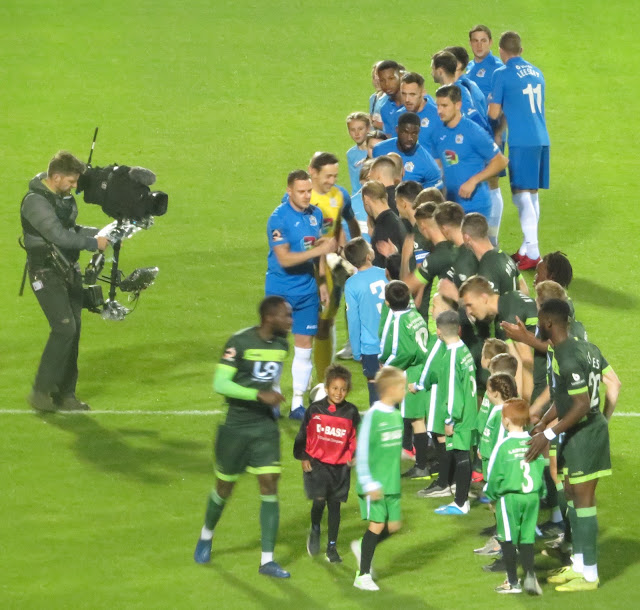 The Stockport fans were in great voice and they were overjoyed when they took the lead on 5 minutes, a header from centre back Ashley Palmer. 20 minutes in and it was 2-0, a shot from the edge of the area after Hartlepool keeper Ben Killip was caught in no man's land. The game was a bit flat after that as Hartlepool offered little, not that the majority of the 3,465 crowd would have minded. The visitors did grab one back with a few minutes to go from close range but Stockport held on for a deserved win. I walked back to town, getting the bus just before 10. I was back in Manchester by 10.30 and so headed to the Smithfield Market Tavern for a couple of pints of Oliver's cider. They went down very nicely and with me leaving plenty of time, I was back at the coach station with 25 minutes to spare. As ever, the overnight coach proved popular and was nearly full. I was lucky enough to only have to share a seat from Wolverhampton as the coach spent six and a half hours visiting various places. It wasn't the most comfortable, but I did manage to get a couple of hours sleep. I was back in London by 6.30 and was quite peckish by now. However, there was nothing I fancied at the train station so I waited until I got back to Chalfont to get a baguette from the local bakery. I was back home at 8.30am, having enjoyed a good couple of days away.

EDGELEY PARK is a pretty decent ground by league standards and even more so now they are in non-league. By far the most impressive stand is the huge Cheadle End, behind one of the goals, which towers above the rest of the stadium. The Main Stand and The Popular Side are the 2 stands along the side. Away fans are allocated part of the Popular Side unless it's a large following, in which case they get the Railway End. This used to be a terrace but is now uncovered seating. Behind it is an electronic scoreboard, which has spelt out many messages of doom for the Wycombe followers over the years. On the whole, the Stockport fans are very friendly, save for a few idiots that turn up for the big games. The area around the ground has plenty of pubs and takeaways, which means, whatever the result, at least you can have a decent time pre-match. I'll try and put in some recommendations on my latest visit, but the stuff in the ground is the usual dull football fare. 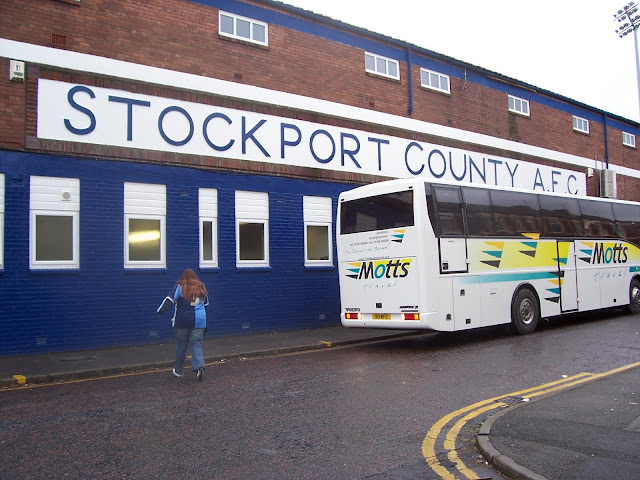 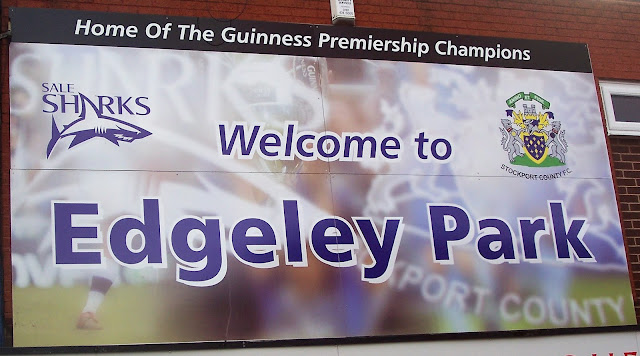 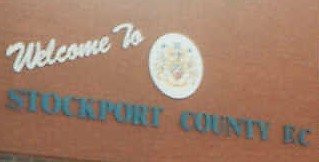 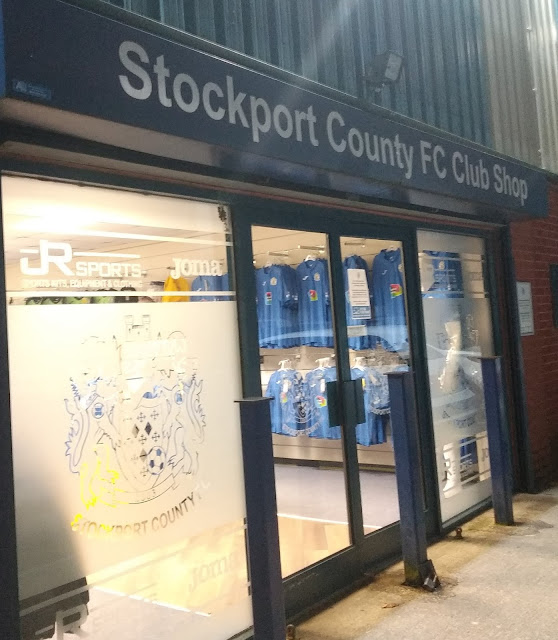 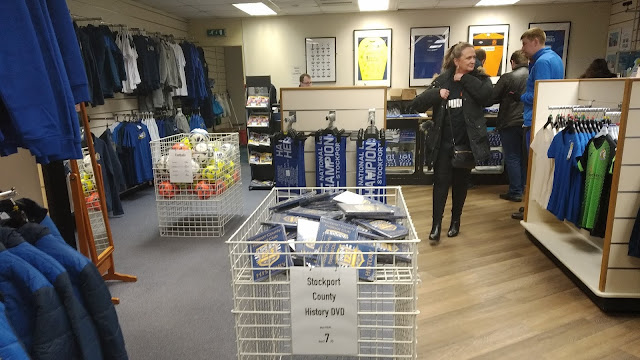 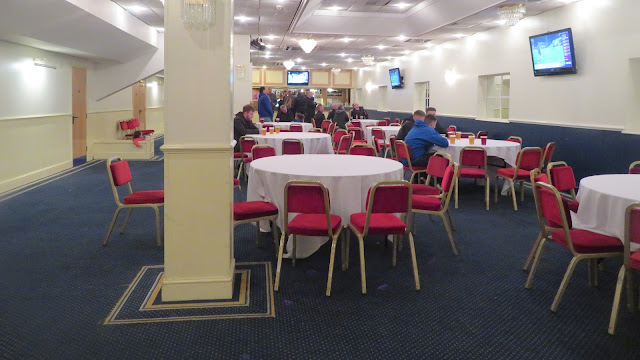 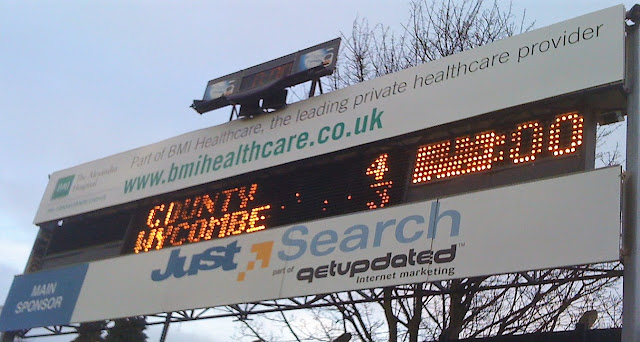 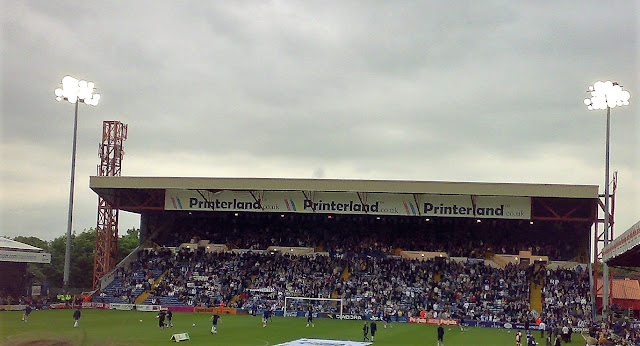 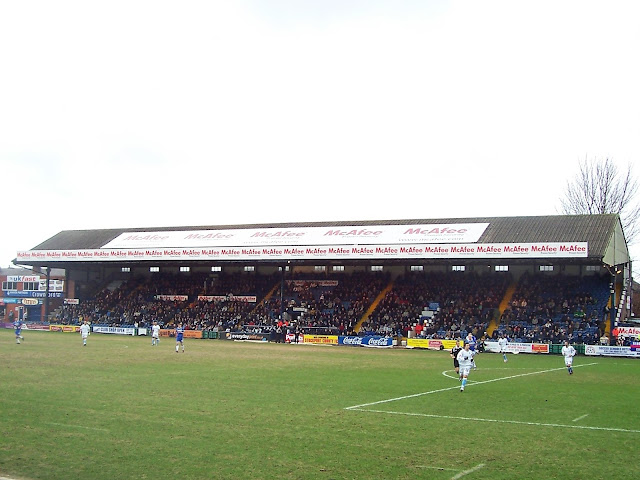 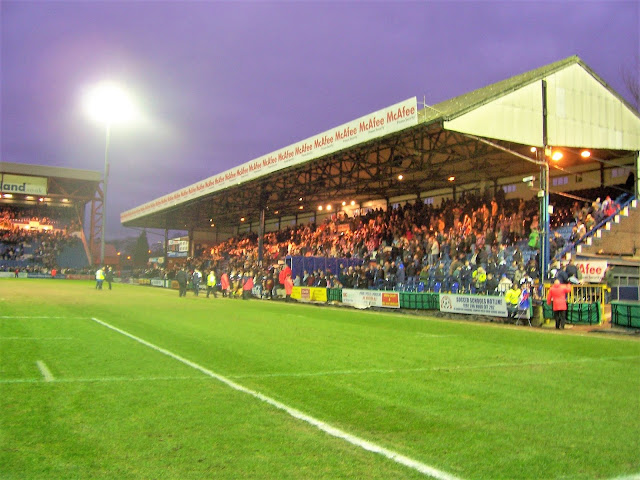 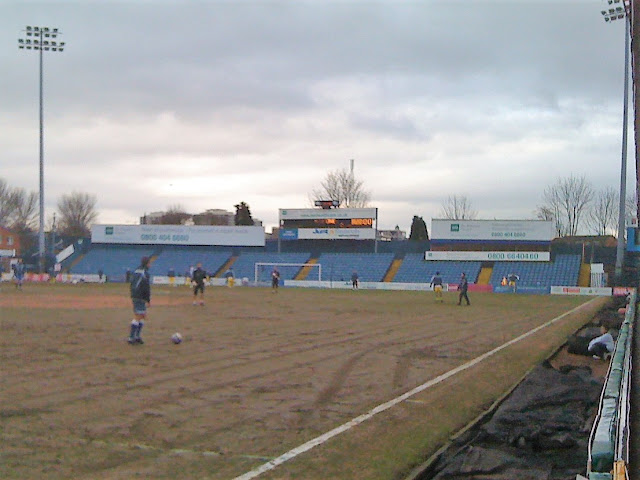 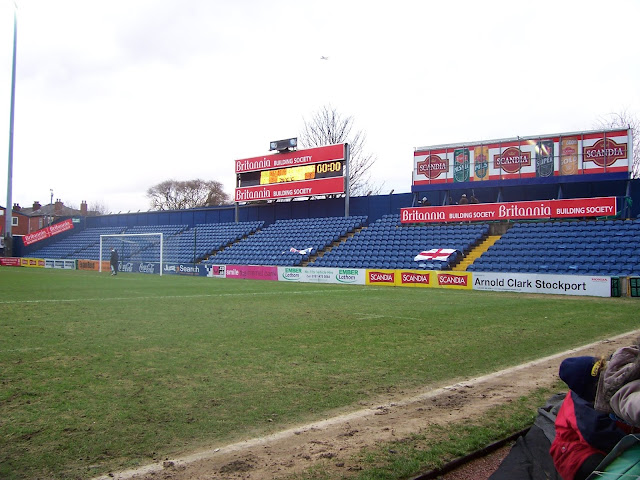 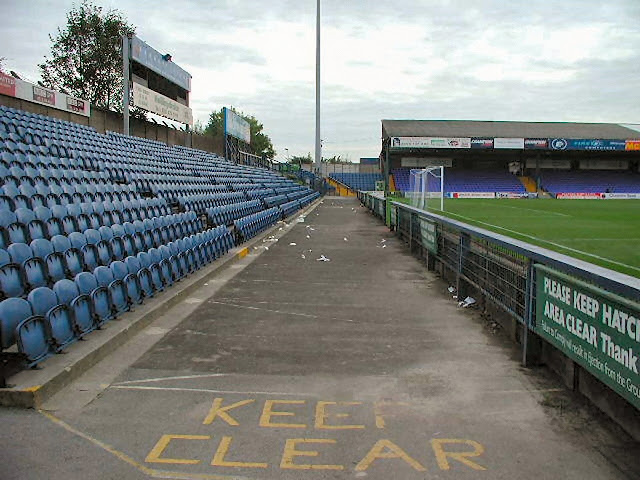 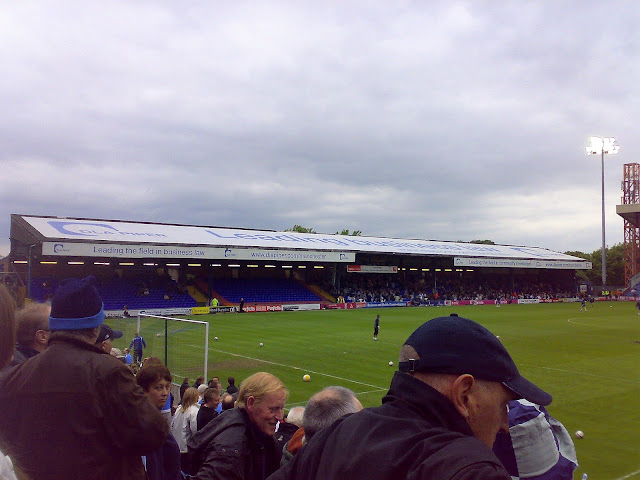 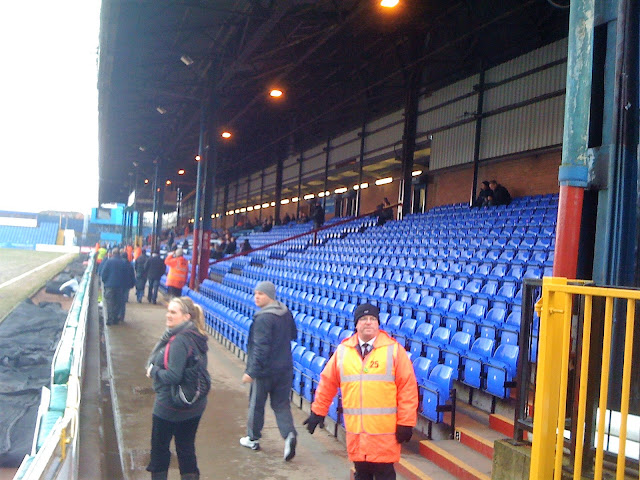