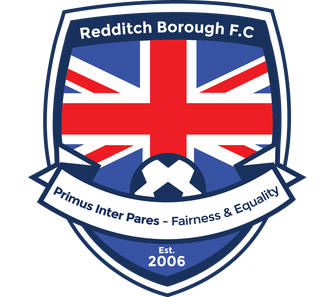 The club is a fairly young one, having only been formed in 2006, initially as an Under 10's side managed by current first team manager Julian Workman and family relation Kim Workman. They progressed up the age groups playing in local leagues before joining open-age football and the Midland League in 2014. Starting in Division 3 (step 8) they finished a credible 4th in their first season. The following year, they finished as runners-up behind Leamington Hibernian. They have been in Division 2 ever since, their highest finish coming in their debut season of 2016/17 when they finished 4th. They were not enjoying the best of times last season, sitting second-bottom when the season was cut short in March.

Redditch Borough have played once in the FA Vase - in 2016 they played Rocester at home, losing 5-2. Local cups won include the Lee James Challenge Cup in 2019, the MFL Challenge Vase in 2016 and the Evesham Hospital Senior Cup in 2016, 2017 & 2018. The town of Redditch has a population of just over 85,000 and was once the centre of the needle and fishing tackle industry. Notable people to be born or live in Redditch include comedian Freddie Starr, politician Jacqui Smith and various footballers including Nottingham Forest's Joe Lolley. Borough share the town with Redditch United who play in the Southern League Premier Division. 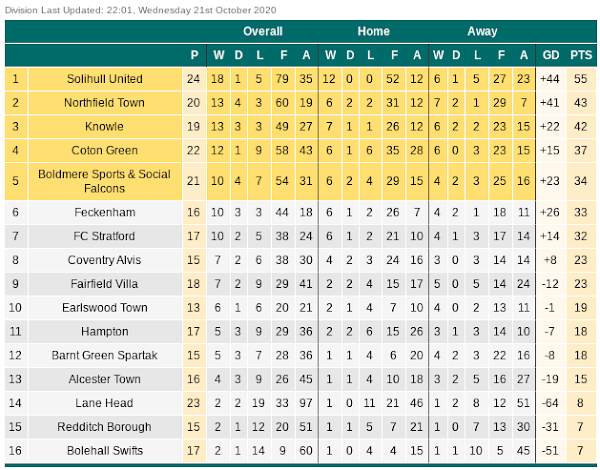 After our morning game, fellow hopper Anwar & I needed an afternoon game. Several options were considered, but eventually, we came to an agreement that we'd do Redditch Borough. I'd originally meant to do this game on the train last year, but the enemy of the people, the weather rained off this and most of my backups and so I ended up doing Team Dudley on the 3G instead. I'd still had a great day out doing it on the train, getting cheap tickets and visiting some great pubs. It was an even bigger enemy, a global pandemic that meant that doing this game on the train would be unwise and also I was trying to avoid areas that were in the 'high' Covid tier. Redditch was fine in this respect and so plans were put in place to double up with a morning game. We left our game at Bartley Green and headed off for lunch. It was a slow old journey to AK Grill thanks to local roadworks, but we got there just after 1. The parking situation was not great and we had to park about five minutes away - not great with torrential rain in situ. Lunch was good though, I had a half-pound handmade burger with chips and a drink for £5.39 and it was excellent. From there, we headed off to Northfield Town FC to get some pictures and we both keen to return for a game. We got to the ground at 2.10 and as it was still raining, we went in the bar. I had a pint of Thatchers Gold for £3.20 in pleasant surroundings and with efficient table service. We went outside with 15 minutes to go with plenty of cover available. There was still plenty of rain too, so this was appreciated. As with the morning game, the players and the referee gathered in a circle, though this time there was a minutes applause as opposed to a minutes silence. It turned out to be for Dave Taylor who had been involved with Alcester Town and who had recently died. 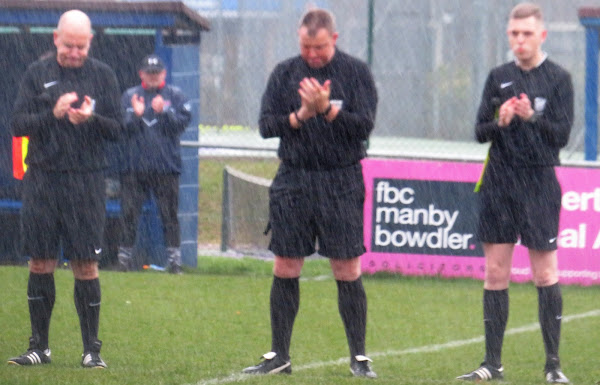 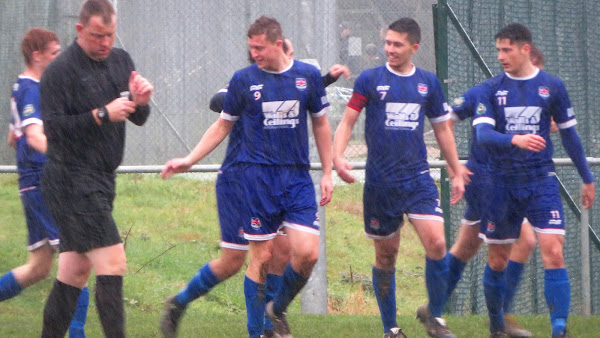 Redditch Borough hadn't enjoyed the best of seasons last time out and the hangover had continued into this term with the team sitting 13th out of 16 teams so far. They'd won 3-1 at Coventry Alvis and drawn 2-2 at home to FC Stratford. However, they'd lost 3-2 to Barnt Green Spartak, 2-0 to Bolehall Swifts, 6-0 at Coton Green and 4-3 to Hampton. Opponents Knowle were in 5th place so far, having played a couple of games more. Highlights had included a 7-1 win against Lane Head and a 4-3 win over Fairfield Villa although they'd suffered a 4-0 defeat to Solihull United. The hosts started on fire and were ahead within a couple of minutes, a good through ball and a composed finish into the corner. On 8 minutes, it was all square when a corner from the left was headed home at the near post.  It was a similar routine on 14 minutes to put Knowle ahead, this time the ball cannoned in off the bar on the way in. It was all square on 19 minutes, in a similar style to the first goal, another good through ball and a smart finish. On 38 minutes, a long drop-kick from Knowle keeper Craig Johnson took an awkward bounce and deceived his opposite number and resulted in an extraordinary goal. It was all for nothing though, as the referee, maybe fancying a full days pay for half a days work, called the game off. Both teams wanted to play on with Knowle ahead and Redditch Borough having the advantage of playing down the slope in the second half. A number of volunteers for the home team worked on the pitch but the referee told them to fork off and defiantly called the game off. It was a shame and had been a well balanced and entertaining game, but there was nothing I could do about it. I was still going to count it as visited after seeing five goals though.

Anwar was keen to see the tail end of another game and so we headed off to Alvechurch v Needham Market where I'd already visited. It was nice for me to get some fresh pictures, even if I wouldn't be adding the game to my records. We even saw a late goal, a penalty winner in the last minute which helped the visitors win 2-1. We'd been following the Wycombe match all afternoon and feared the worst after they went 1-0 down after three minutes at Norwich. However, we equalised ten minutes after and looked to be heading for our first Championship point until a hotly disputed free-kick was dispatched in the last minute for the hosts, not the only questionable decision according to BBC Three Counties which we listened to on the way home. I'd decided to pay another visit to an off licence called Cotteridge Wines which was six miles away in the wrong direction though it was worth the effort as I got a load of ciders that I'd not tried before and it was indeed an excellent establishment. The 606 Radio 5 phone in kept us company on the way home and made the journey pass fairly quickly. I dropped Anwar off at 7.05, getting home by 7.30. I had a few of the ciders I's bought earlier as well as some beef burritos that I'd got from Lidl the previous day. I completed my blog from the morning game but as usual, was easily distracted and left this one until the next day. I watched the EFL Highlights and some of Match Of The Day before going to bed at 11. The clocks went back an hour and so I appreciated the extra hour in bed and although I'd have preferred more sleep, I felt fine the next morning. Next up for me is looking to be Kirby Muxloe v Cadbury Athletic on Tuesday, one of my nearest unticked grounds. 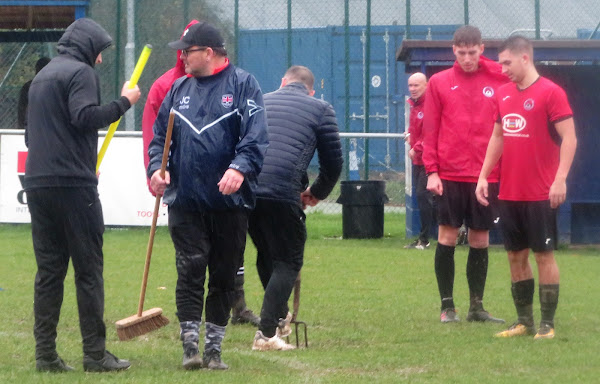 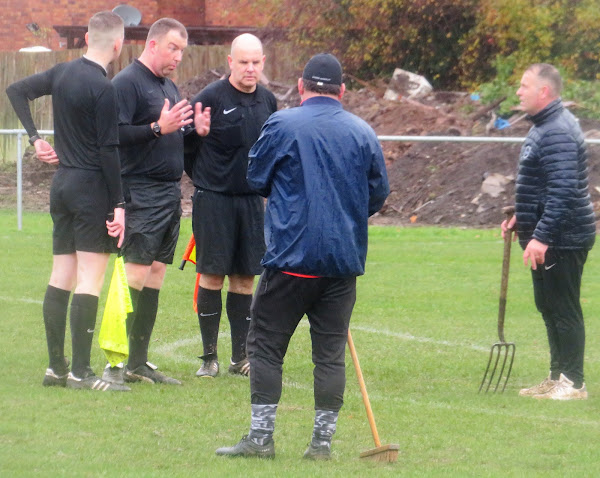 THE MSS GROUND is a decent venue for step 7. There are small areas of cover on three sides, these probably provide space for around 100 people to stay dry. There's a smart bar at the ground this is well priced and has sports TV. Cider drinkers have the choice of Thatchers Gold or Carling Mixed Berries. I didn't see any food but the town is 15-20 minutes walk away where there are plenty of takeaways and pubs including two Wetherspoons. There's plenty of parking at the ground but I'm not sure about public transport. 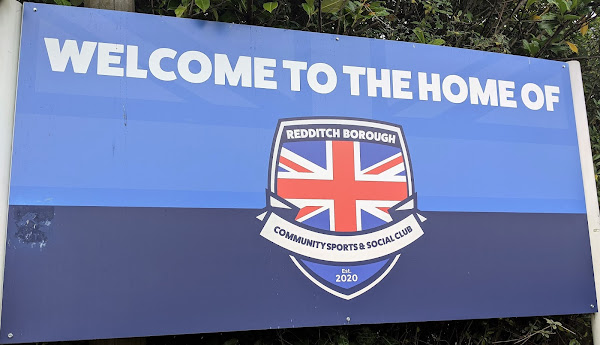 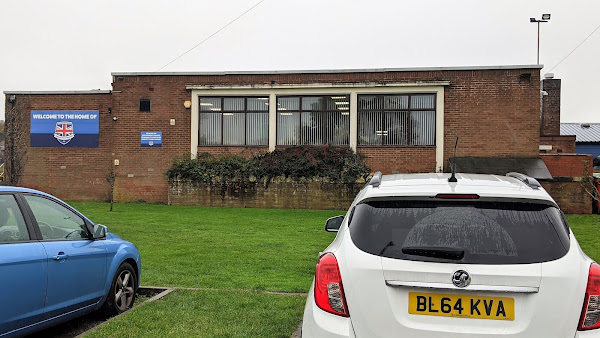 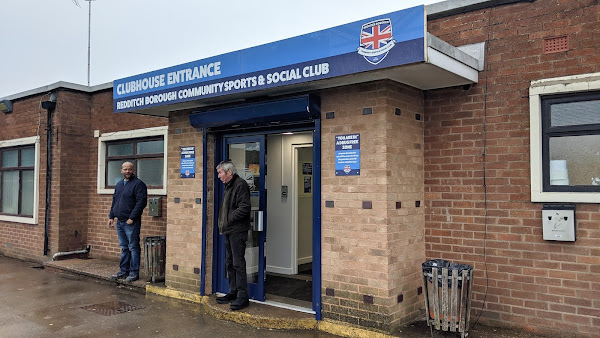 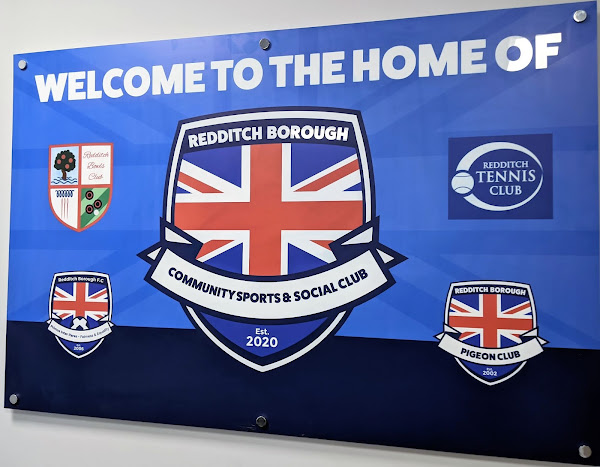 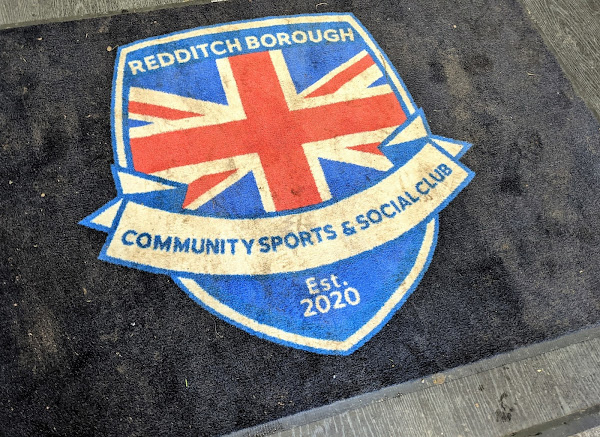 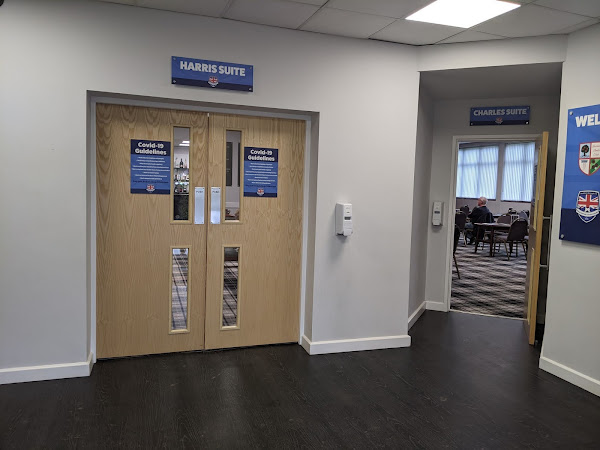 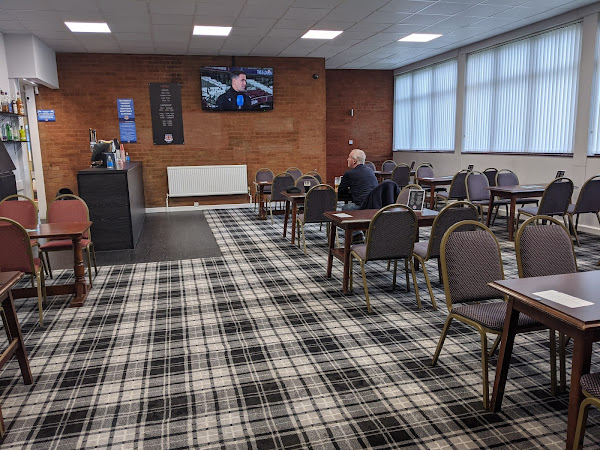 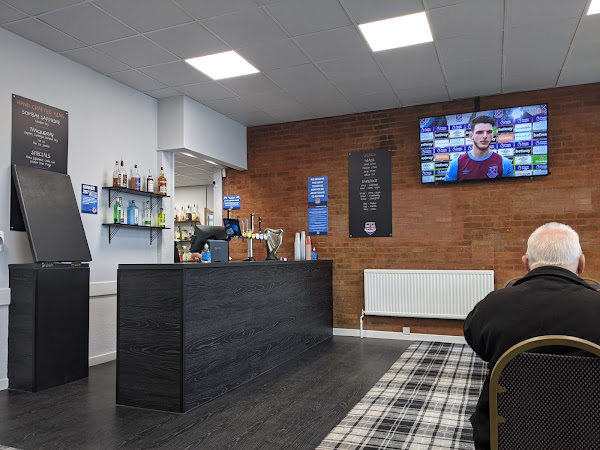 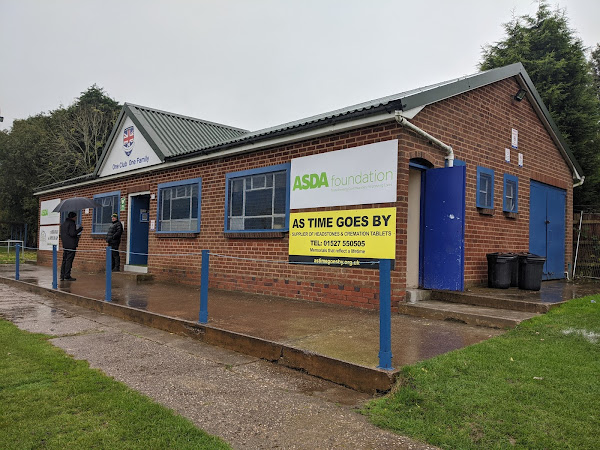 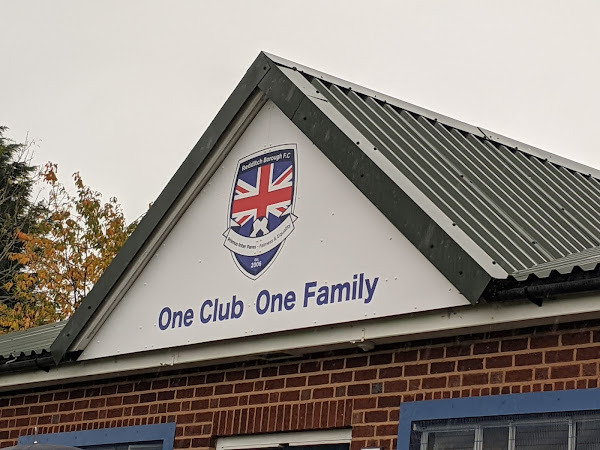 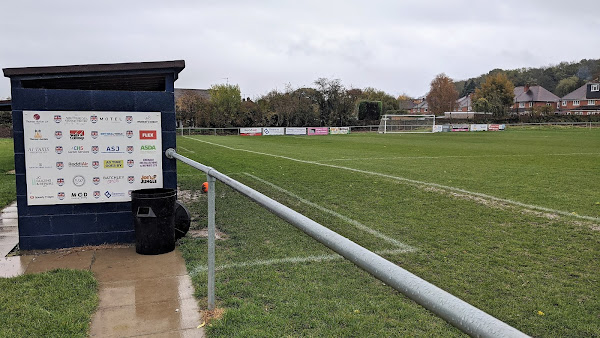 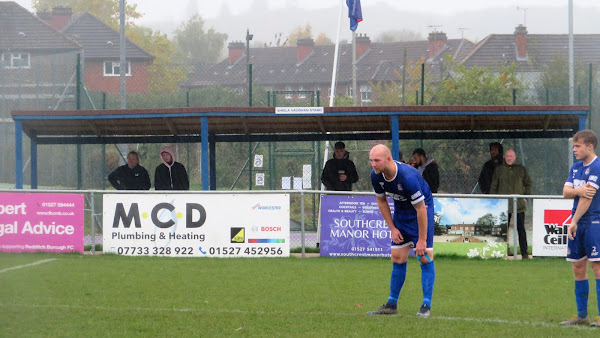 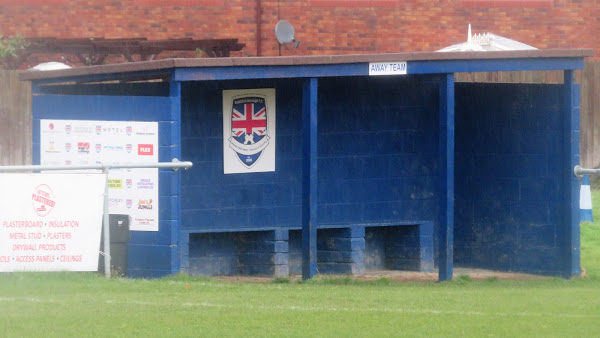 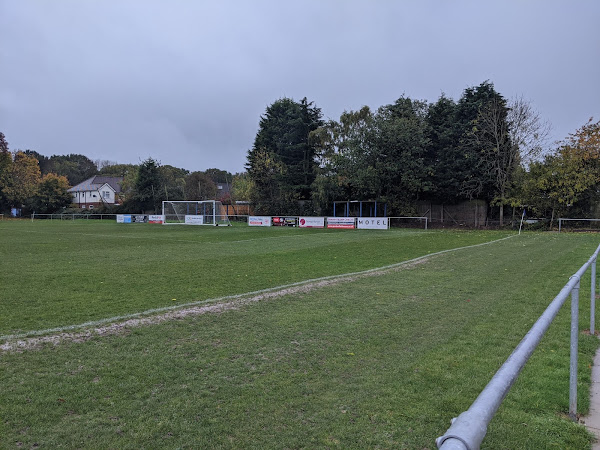 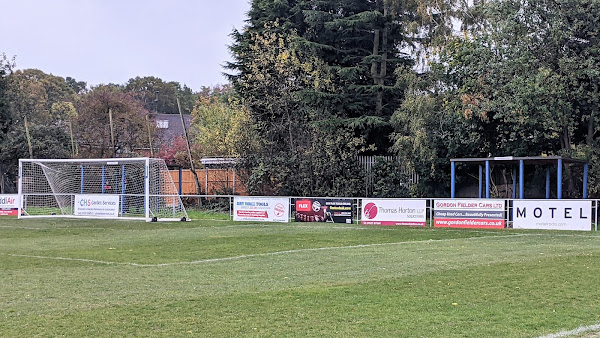 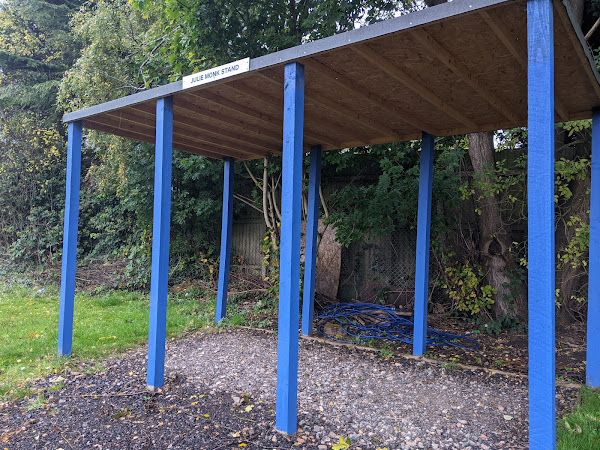 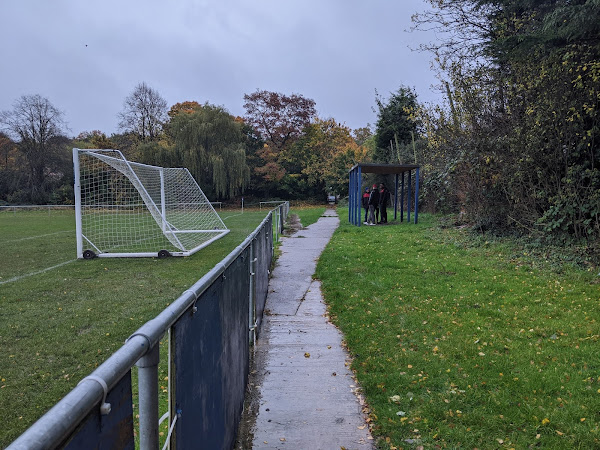 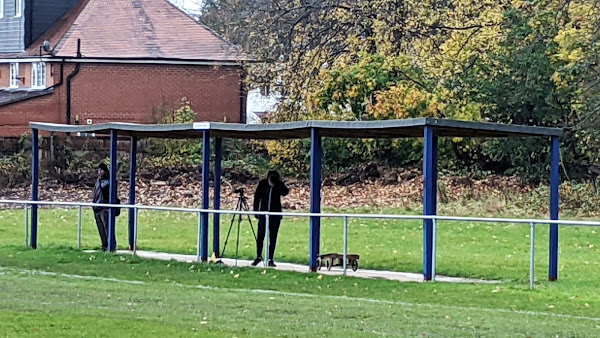