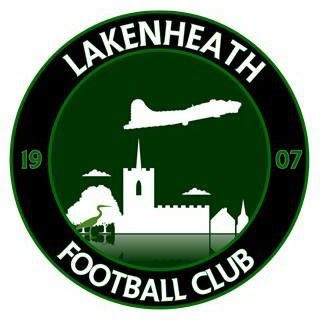 The club was established in time for the 1907/08 season and started out in the Ouse Valley League. They played in the Essex & Suffolk Border League and Norfolk & Suffolk League before the latter merged into the Anglian Combination in 1964. They progressed through the leagues, finishing as runners-up in Division 3 in 1969, runners-up in Division 2 in 1975 and runners-up in Division 1 in 1982 to reach the Premier Division. Their stay was a short one and by 1986, another relegation saw them back in Division 2. In the late 1990s, they transferred to the Cambridgeshire County League, winning Senior Division A in 2008 to reach the Premier Division. Lakenheath adapted well to life at the higher level, finishing as runners-up in 2009 and champions the following season. A championship and a further pair of runner-up spots would follow but in 2018, they joined the expanded Eastern Counties League, despite only finishing 8th the previous season. Their debut season at step 6 was a decent one, with a 5th place finish.  When proceedings were called to a halt in March, the team were in 2nd place and on course for promotion.

Last season saw Lakeheath make their FA Vase bow, losing 2-1 at Walsham Le Willows. They made up for that this season with a 7-1 demolition of Framlingham Town to set up today's game. In terms of local competitions, they won the Suffolk Junior Cup in 1937 and 1975 and the Suffolk Senior Cup in 2015. The village of Lakenheath has a population of just under 4,700 and is home to RAF Lakenheath, the largest deployment of USA personnel in the UK. 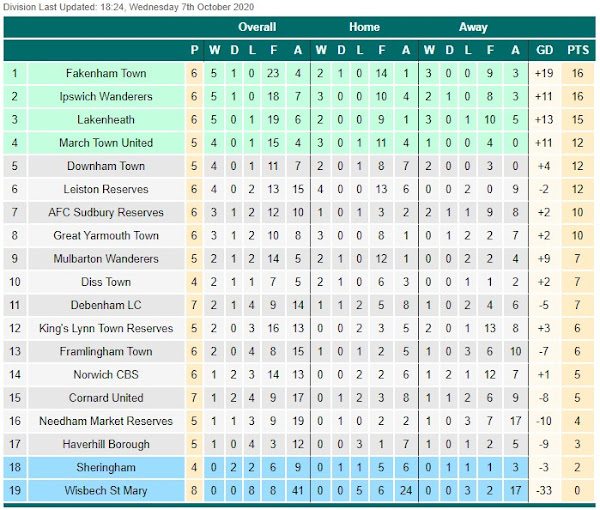 Once again, it was a free Saturday for me and with it being FA Vase weekend, I was keen to see a game in the competition. I checked with my fellow hoppers as to who was available and was glad when my usual hopping partner Anwar said he was interested. There wasn't a huge amount of choice available - most of the Midlands and North was out due to the coronavirus unfairly affecting them more than the rest of the country and a lot in the south meant coming via Anwar was uneconomical. It boiled down to three options and uninspiring grounds and games were passed up at Thornbury Town and Whittlesey Athletic. It was a shame as these both had decent options for a pre-match. In the end, I decided to go for the best game and ground. The Nest was much admired amongst groundhoppers and just over five miles separated the destinations of Lakenheath and Mildenhall. I made the decision on Wednesday night and researched the club history the following day. The day before I walked down town after work and had a couple of pints. It was good to have an unexpected catch up with an old mate before getting a lift home. I did briefly consider seeing if I'd sober up in time to drive to Binfield for a revisit but in the end, I just had a couple of cans at home. I must be getting old as I was tired and in bed just after 8 and asleep an hour later. As a consequence, I was awake at my usual work time of 4am. I caught up online and was disappointed to find out that I'd missed out on a 4-4 draw between Binfield & Windsor last night. 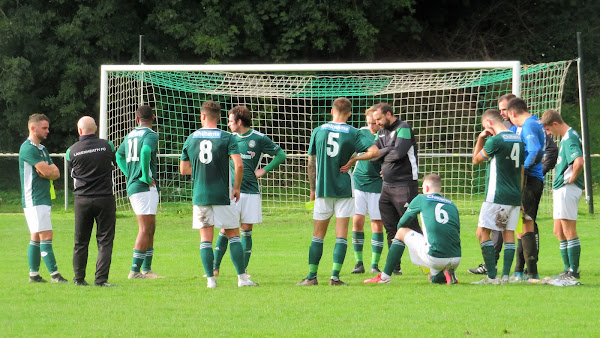 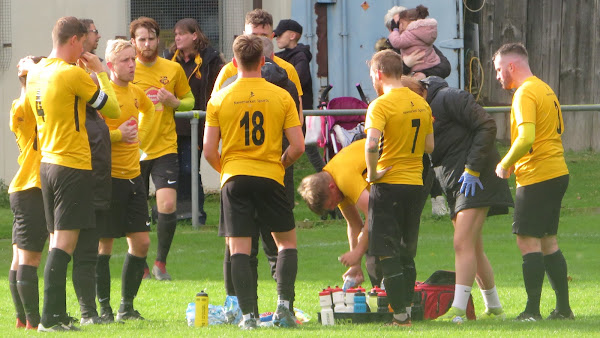 I had some jerk chicken sausages for breakfast and did some more work on my upcoming blogs. After researching Baldock Town's history for my planned revisit to Arlesey tomorrow, I got a text from my fellow hopper Colin saying he had binned me off in favour of going to Tooting Bec instead, marvellous. I'll have a decision whether to continue to make the short journey or to save it for another time when I can go with someone. That said, it's a fairly short journey which would probably cost less than the ludicrous £15 the Premier League are charging to watch a stream of their soulless product. There was drizzle at home and plenty of games falling victim to the weather up north but thankfully, my choice of game appeared to be OK. I left at 11, picking Anwar up at 11.30. We had a good journey over to Suffolk with no major traffic at all. I needed the toilet so we stopped at a services around 30 minutes away from the ground where I had a Greggs Southern Fried Chicken baguette which was decent. It saved the need to go into the village before the game and so once we'd got to the ground at 2, we went straight in. Admission was £6 and a programme £1. I bumped into fellow hopper Richard and we had a good chat. Typically, after being dry all day, it started to rain. I went into the bar, but thanks to the government, it was table service only. After waiting ten minutes with no service, I gave up. The same was true of the food with the volunteers stretched to the limit. I don't blame the club at all, it was an unenviable position to be put in, but I heard similar tales of woe from others. The silly rules cost them a fair bit of money, surely wearing a mask to the bar would suffice. We decided to stand along the other side where there were less people, standing in the half in which Mildenhall were shooting. 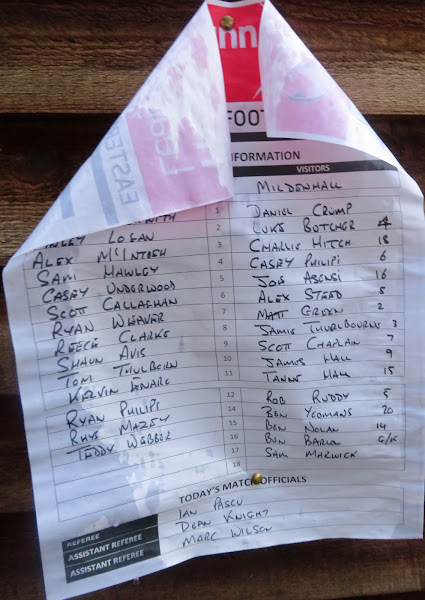 Lakenheath had enjoyed a flying start to the season and sat 3rd in Eastern Counties Division 1 North. As well as progressing 7-1 against Framlingham Town in the FA Vase, they had enjoyed league wins over Sheringham (2-1), Wisbech St Mary (5-1), Haverhill Borough (4-0), March Town United (2-1) and Great Yarmouth Town (4-0). Their 100% record had come to an end against Debenham LC last Saturday as they suffered a 3-2 defeat away from home. Mildenhall Town were sitting in 9th place in the Premier Division and were unbeaten - they'd defeated Godmanchester Rovers 1-0 in front of me on 15th September and had also beaten Gorleston 4-1 in their latest game. They'd also had draws - 2-2 and Newmarket Town and 1-1 at Woodbridge Town. In the FA Cup, they'd won 4-3 at Hadleigh United and beaten higher league Corby Town on penalties following a 1-1 draw before their run came to an abrupt end with a 4-0 defeat at Leighton Town. They had won 2-0 at Huntingdon Town to get this far in the FA Vase. It was the visitors who were the better side early on, they saw plenty of the ball but didn't really test the keeper. Lakenheath were restricted to chances on the break, but they looked more dangerous. Tanner Call had the first real chance of the game after he found himself in a good position but he fired narrowly wide. The opening goal came on 20 minutes, a brilliant ball in by Jamie Thurlbourne found a Mildenhall head, home keeper Charlie Beckwith made a great save but he was unable to prevent Casey Phillips follow up from close range. The lead was doubled on 25 minutes when Call made up for his earlier miss with a delightful goal, running through the defence and showing great ball control and composure to slot into the bottom right-hand corner from just inside the area. A few minutes before half time, Beckwith made a great double save to prevent the visitors from extending their league. Lakenheath sought to get back into the game and they had a promising start to the second period, forcing a series of corners. However, they were caught by a sucker punch on 48 minutes when James Hall had all the time in the world to turn and finish well. Mildenhall continued to dominate possession but the game slowed to a lull. Lakenheath were given hope on 65 minutes. Mildenhall keeper Daniel Crump took too long on the ball and Tom Thurlbourn nicked the ball off his toes and slotted into the net. A number of free-kicks and corners were put in, but there never seriously looked like there would be any serious chance of a comeback.

We left around 4.50 and needed a drink so we popped to the Co-Op across the road. I got myself a 2-litre bottle of cloudy lemonade for 65p. I really fancied listening to a commentary of a game but couldn't find any. Instead, we tuned into BBC Three Counties and listened to the local results coming in. After that, we listened to TalkSPORT quiz which helped the journey pass quickly. There was a whole ton of rain on the way home as the weather showed it's usual contempt for the British people. I dropped Anwar off at 7. After passing up the chance to try one of the Aylesbury Chinese takeaways for salt and pepper chips, I stopped at my local shop, South Hill to see what they could do. It took ages to come and when it did, it was a small portion. They were quite tasty but they came bottom out of 11 establishments so far tried on my spreadsheet. I had a couple of drinks whilst I typed my blog and listened to the Wycombe Wanderers show on YouTube. I planned to get into bed around 10, but with it being a Saturday night, that was a moveable feast. Next up for me, I am not sure. With an early look indicating a sparse choice of fixtures on Tuesday night, I can't be sure when my next game will be. 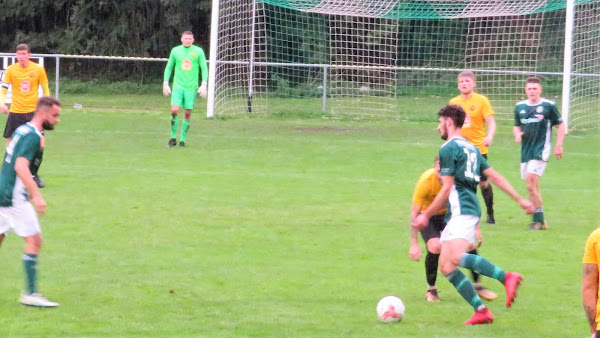 THE NEST is set in a quarry with pleasant and high woodland on three sides, giving it an imposing feel. There's just the one area of cover, a stand with benches holding around 150 people. The rest of the ground is open with plenty of hard standing. The bar and tea bar facilities looked decent and under normal times would be perfectly serviceable. The ground is right near the village and there's plenty of choices here with a chip shop, a Co-Op and a Chinese/Japanese restaurant a few minutes walk away. 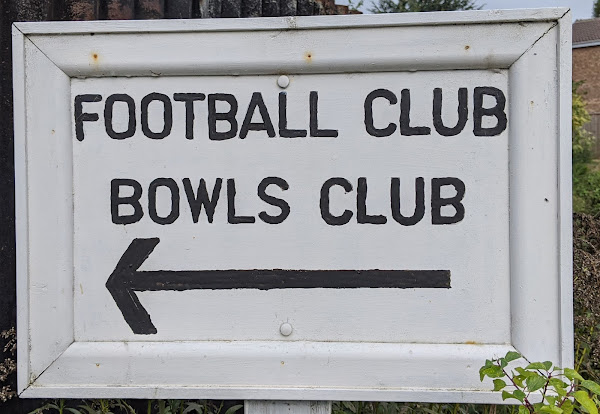 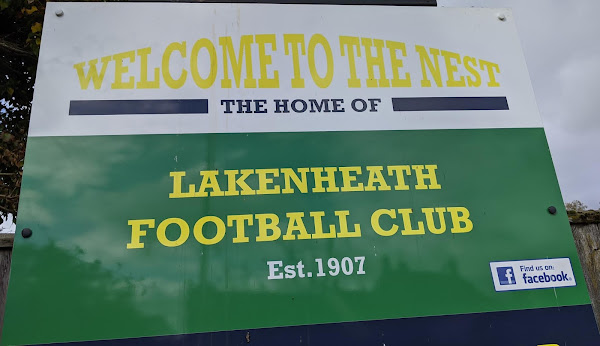 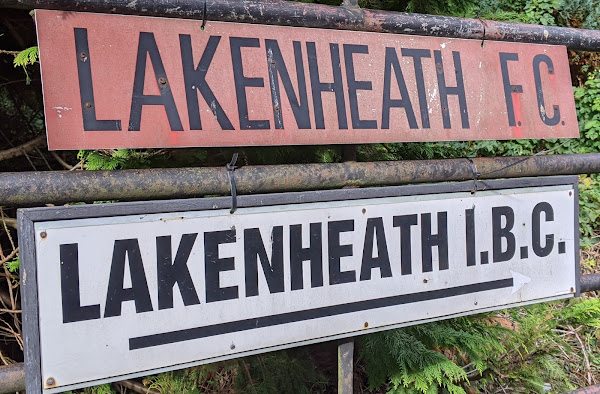 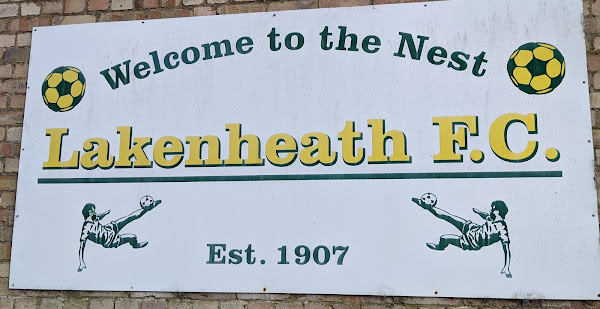 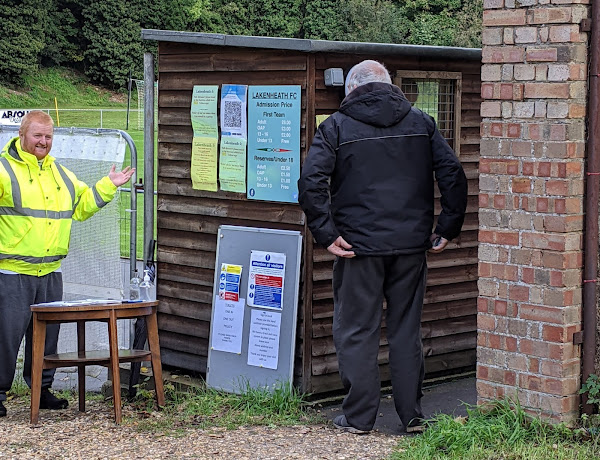 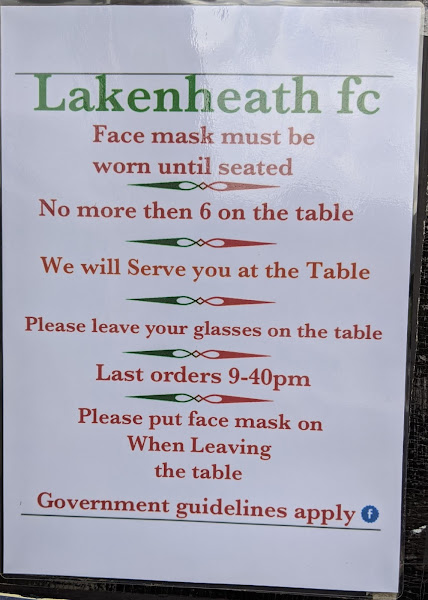 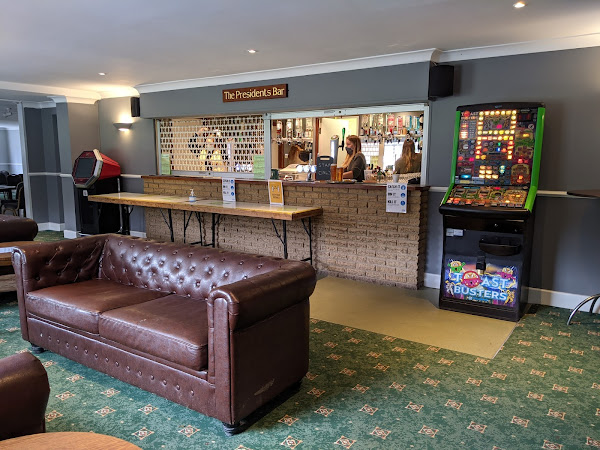 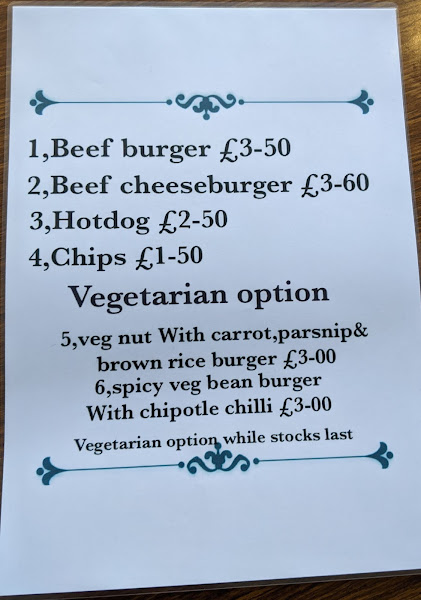 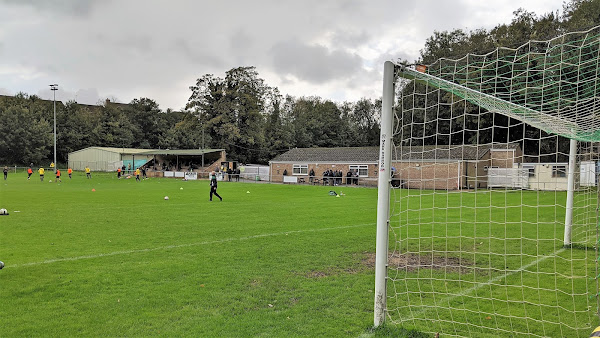 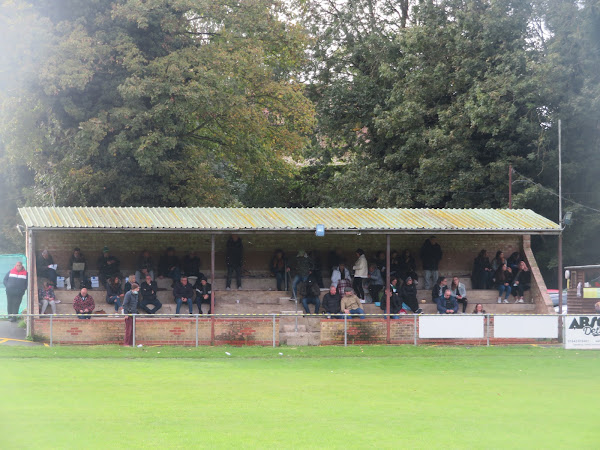 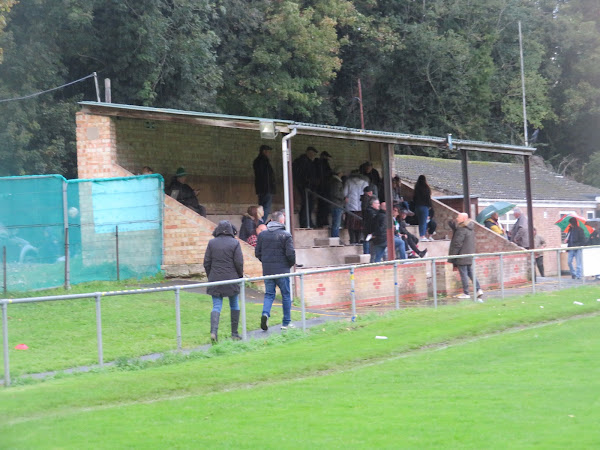 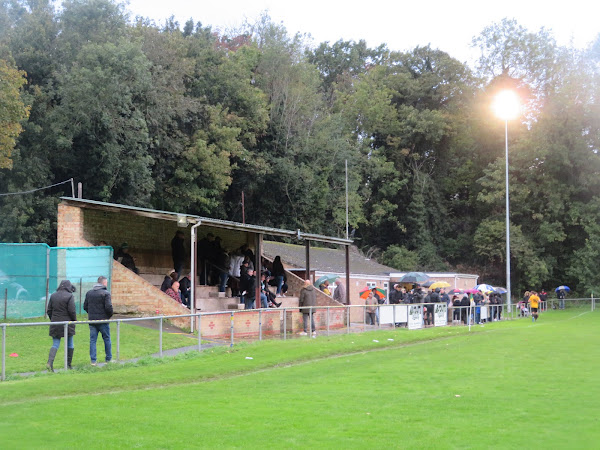 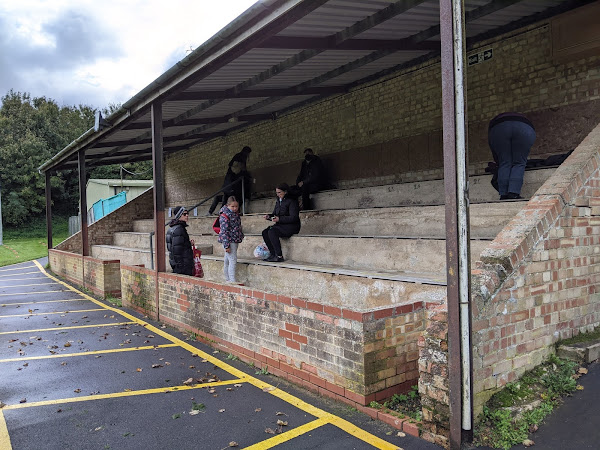 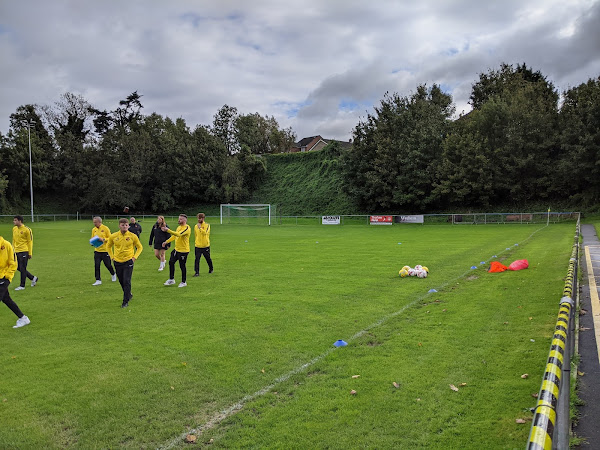 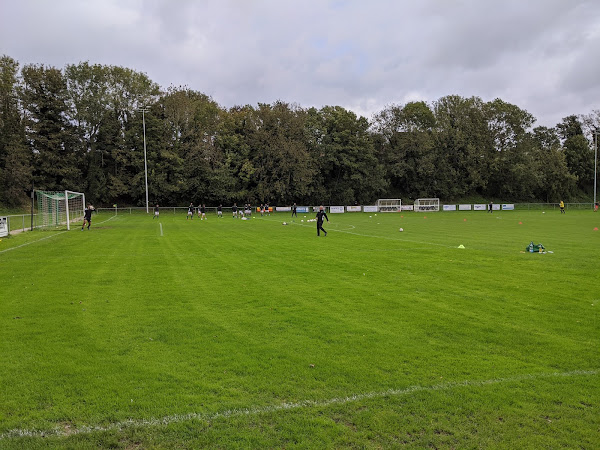 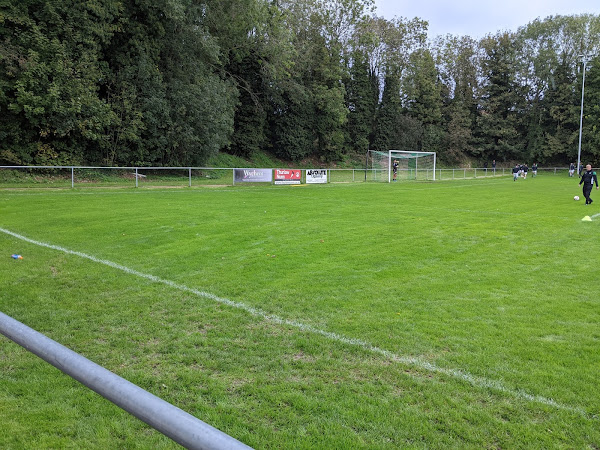 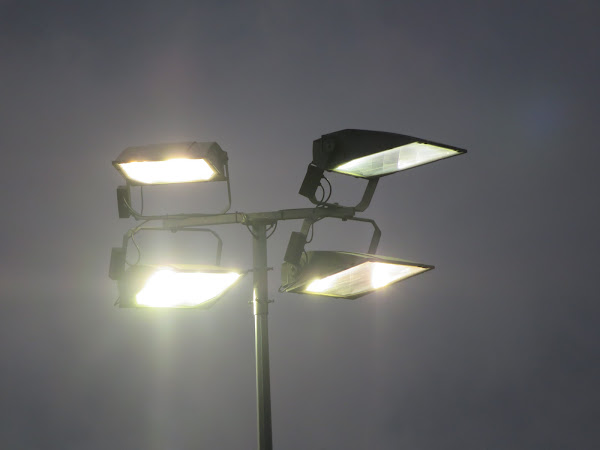