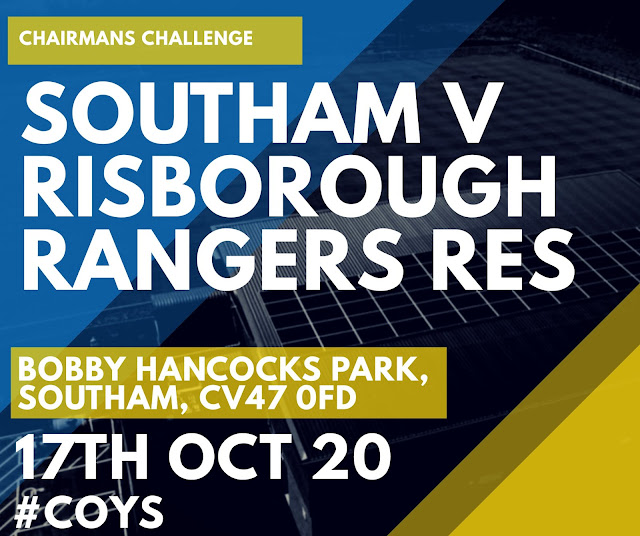 The club was established in 1905 following the amalgamation of two local village teams. They played in local leagues for the first 75 years of their history, including a very successful period in the Coventry & North Warwickshire League between 1947 & 1956. In 1980, Southam United joined the Midland Combination. Starting in Division 3, they were champions in their first season and runners-up in Division 2 in their second. The following season, they finished 3rd and were promoted to the newly-renamed Premier Division. They struggled at this level but it was not down to the playing side that they suffered a double relegation in 1987. It was discovered that the pitch was too short following the construction of a bowling green at one end of the ground and Southam United were relegated to Division 2. They spent a couple of seasons here before 4th place was good enough for promotion in 1989. In 1995, they finished in 3rd place in Division 1 and were promoted back to the Premier Division. They'd remain in the Midland Combination for around 20 years, the best finish coming in 1998 (the club's all-time record finish behind Worcester Athletico who would later merge into Pershore Town) and 2012 as they finished as runners-up to Continental Star. In 2014, the league was merged into the Midland League with Southam United placed in Division 1 (step 6). Despite a 7th place finish in their first season, two consecutive bottom-placed finishes in the next two seasons saw the club leave the Midland League and the adult team disband. It was also during this time that they left their previous ground, selling it to Bloor Homes and moving into a more community-based facility. It was named Bobby Hancocks Park in honour of their record appearance make who scored over 1,200 goals for the side. Last season the club re-emerged in the Hellenic League Division 2 North and were top of the league by 15 points when the season was abandoned back in March.

In the FA Cup, Southam United exited at the first hurdle in 8 of the 9 seasons that they competed. In the other, 2008/09. they beat Boldmere St Michaels, Lye Town & Gornal Athletic prior to losing to Atherstone Town in a 2nd Qualifying Round Replay. 2012 saw them reach the FA Vase 2nd Round - beating Continental Star and Pegasus Juniors before a defeat to Long Eaton United. Local cup wins include Midland Combination Challenge Vase in 1981, the Birmingham FA Vase in 1998, the Birmingham Midweek Floodlit Cup in 2009 and the Coventry Evening Telegraph Cup in 2011. The market town of Southam has a population of 6,500 and was home to a short-lived RAF base that saw service during World War 2. It is home to the computer games publisher Codemasters who started out in 1986 publishing games for the ZX Spectrum and are still going to this day. There is also an excellent cider firm, Napton cider, based in nearby Napton on the Hill. Famous people to live in the town include Eastenders actor Adam Woodyatt and former football manager Arthur Cox. 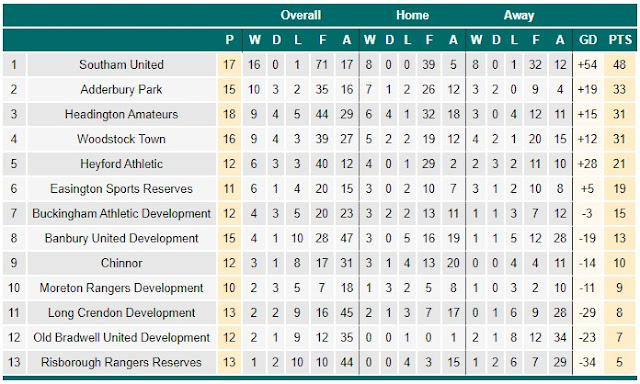 MY VISIT
What with the ever-dwindling list of midweek options, I resolved to try and do a step 7 ground on this Saturday. I presented fellow hopper Anwar with a list of around 40 possibilities and he chose one of the nearest options in Southam United v Risborough Rangers Development. This was fine by me, as it was a cup game and I'd been doing a lot of driving lately, so didn't mind the short distance. I'd visited the original ground in 2014 as Southam United played Cleethorpes Town in the FA Vase. The day before was my standard football-free Friday. I walked down town to the Rose and Crown, had a couple of pints and walked home. The world was a truly depressing place, no sign of an uninvited and unwanted virus disappearing. With the stubborn government ignoring the fact that schools had caused the spike and the inhumane opposition in Keir Starmer trying to force a lockdown, freedom felt like it was going to disappear rapidly. Therefore, I was going to enjoy things whilst they lasted. I firmed up things with Anwar on Friday night, arranging a meet time. I had a few more drinks but would have much rather been out watching a game. I had a fairly early night and was asleep by 10. I woke up early too, eventually getting out of bed at 7 and having a bacon & egg roll for breakfast. I then had a shower and put together a list of potential games for Tuesday, around 20 options with only Friar Lane & Epworth being ruled out to being in the 'high' Covid tier. After watching some YouTube videos, I left at 12, getting to Anwar around 25 minutes later. He was already there along with his son Hicham and one of his mates. Soon enough we were on our way, making the slow but steady journey along mainly country roads. We were at Napton Cidery by 1.50 which was around four miles from the ground. The route had not been the greatest and I was getting fed up of driving as I was avoiding public transport & London. I picked up a couple of bottles before driving to the ground. There was little choice in the town according to my research and what was open had now closed, food-wise. The wrong entrance was shown on Google Maps but a friendly but firm local resident didn't fancy me parking outside her house and told me the way round which was quite a trek by road considering it was just around the corner. I was there by 2.30 and as I'd not had lunch yet, got a Pot Noodle for £1.40 and a Kit Kat for 80p. I decided only to scan social media as I didn't have much time and through I'd write my blog instead. 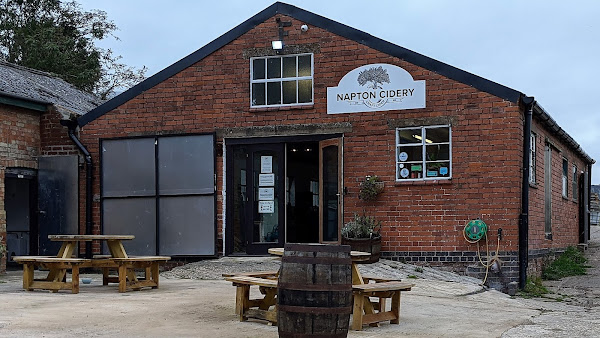 Southam United had enjoyed a decent start to the season. In the league, they'd won their only game 4-3 against Aston Clinton Reserves. In the Blufin Sports Cup, they'd beaten Langley 3-2 before losing to Easington Sports on penalties. Risborough Rangers Development had lost their only game, 2-1 at home to Ardley United. The two sides had been due to meet a fortnight ago but the game was called off after Risborough were unable to raise a team. The game was fairly even early on and both keepers made good saves. Chidlim Okolo was harshly booked for kicking the ball away though it was more a case of miscuing his shot after he was ruled offside. The home side took the lead on 29 minutes when after a great save from the Risborough keeper Ricky Barby followed up from a few yards out. Southam doubled their lead a couple of minutes before the break. A good ball was played down the right, the ball was squared and Simon Barby curled into the bottom right-hand corner. Risborough started the second half strongly and Southam keeper Eddie Cox made a superb one-handed save to preserve his side's clean sheet. A Risborough man got a head injury with a bit of blood and needed to be patched up. They didn't deserve to be on the end of the late rally by Southam. Firstly on 79 minutes Levi Steele put home a low shot at the back post following a cross from the left. A drilled low shot gave Steele his second a couple of minutes later. A couple of minutes from time Brandon Hallmark headed home to give the scoreline a slightly flattering look.

It had been a decent game and the majority of the 48 in attendance went home happy. It was just past 5 by the time we left and we listened to the report of the Wycombe game on BBC Three Counties. We had been screwed over by a nonsensical decision to disallow a perfectly good goal which would have given us the lead at 1-1, instead we went on to lose 2-1 at home to Millwall to make it five straight defeats in the Championship. At least we got our first goal, but the stubborn Oliver Dowden who runs the department of culture, media and sport for the government must take his share of the blame. He has consistently failed to allow supporters in any number into games. As well as lost revenue for clubs, fans might well have guided the referee into making the correct decision. I dropped Anwar off at 6.10 and got home myself around 20 minutes later. I had a green salmon curry and rice for dinner and a bottle of perry that I bought earlier. It was very good, but then it should be for a tenner. I finished up my meal and typed my blog, watching Steptoe & Son as I typed it. I planned to get an early night with me being up at 4 the following morning, but as usual with Saturday night, that time was a moveable feast. 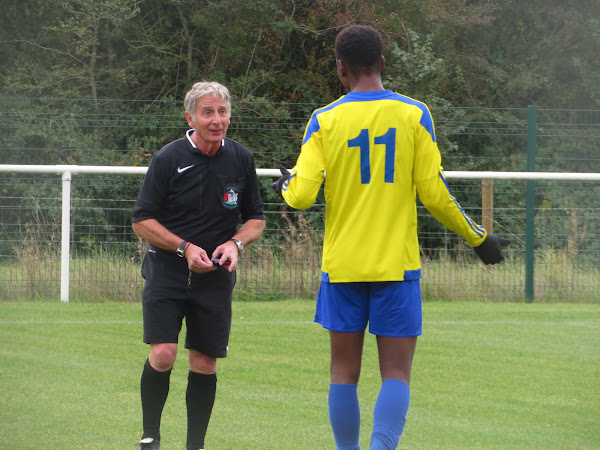 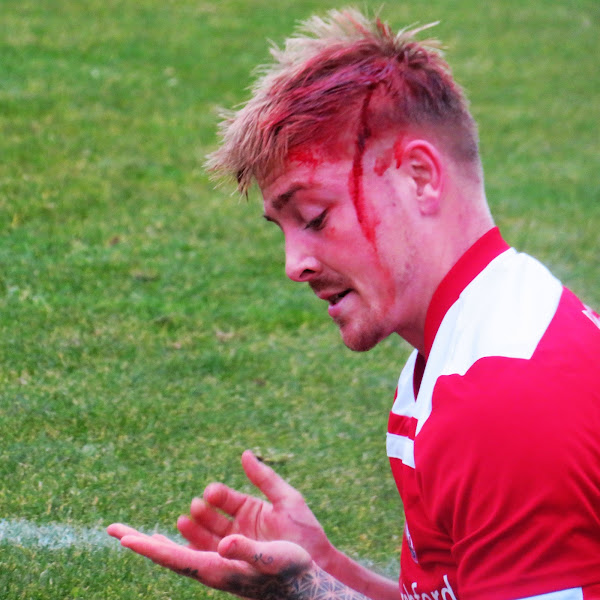 THE GROUND
BOBBY HANCOCKS PARK is a decent setup for step 7. There's they typical metal seated stand holding around 100 as well as some steps of terracing opposite. The rest of the ground is open hard standing. All in all very neat and modern. There's a basic tea bar where the only hot food is a pot noodle. The bar was closed on my visit, but looked smart and had a viewing balcony for an elevated view. The town is not too far away, certainly walkable and offers a few pubs and takeaways. There's also plenty of car parking. The only slight disappointment was the lack of club branding or signage that I could see. 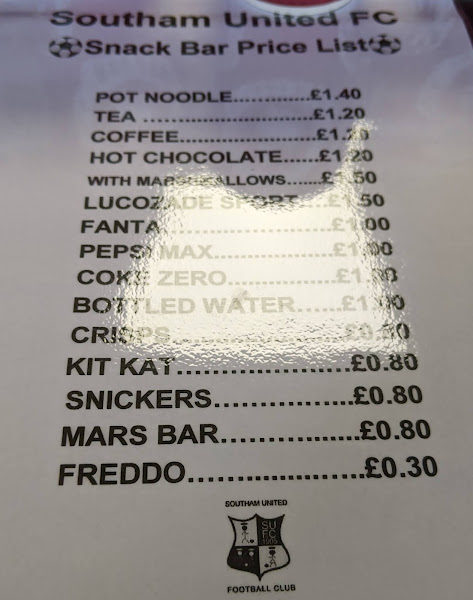 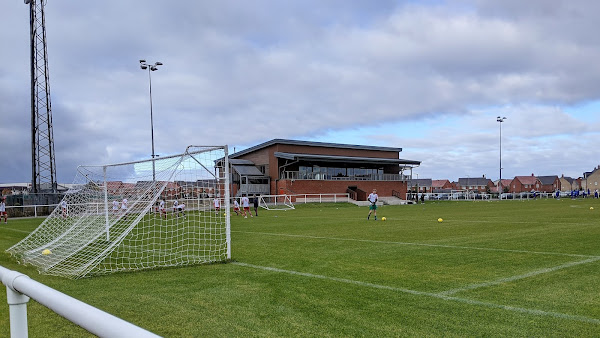 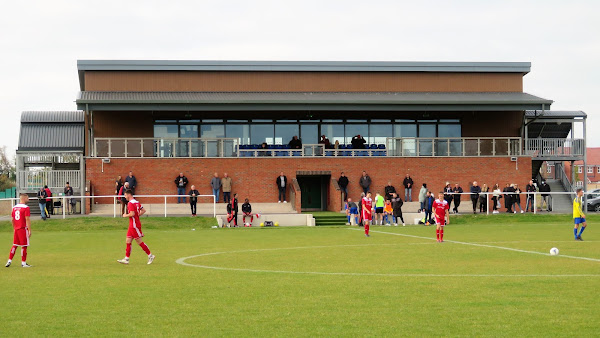 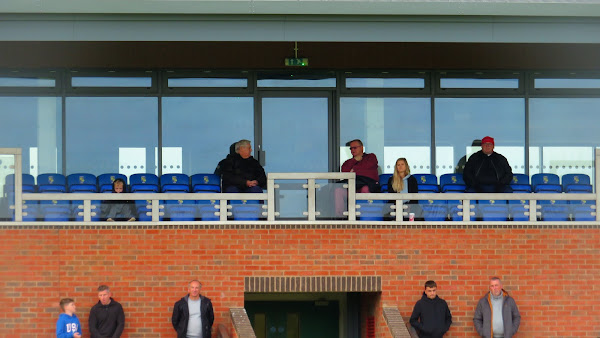 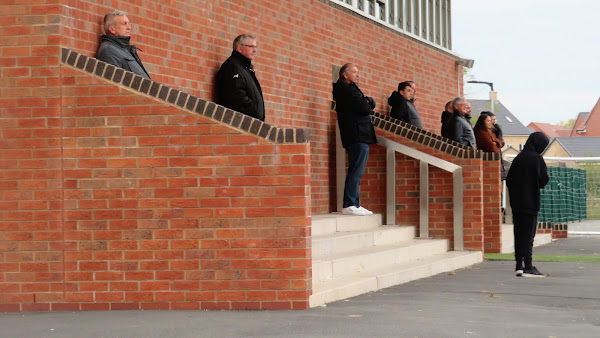 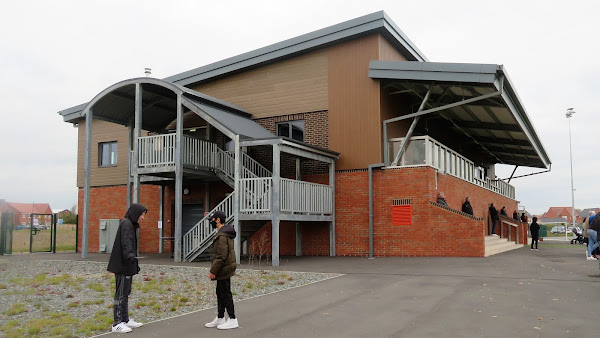 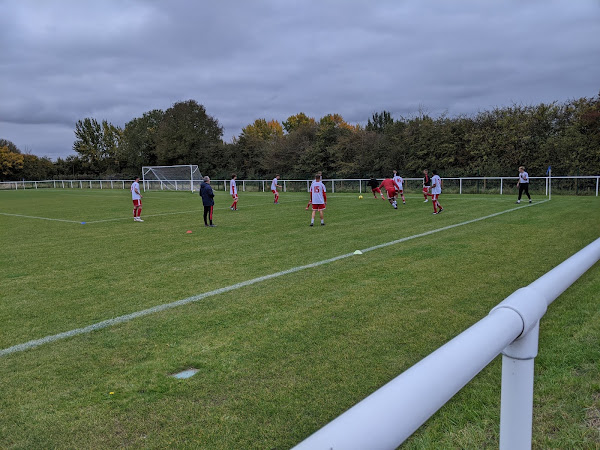 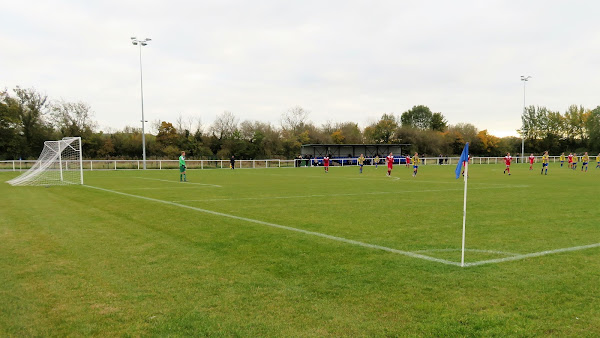 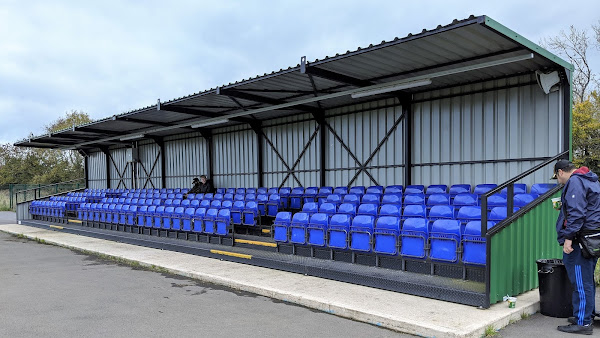 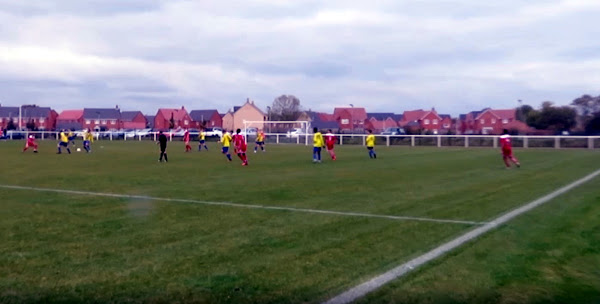