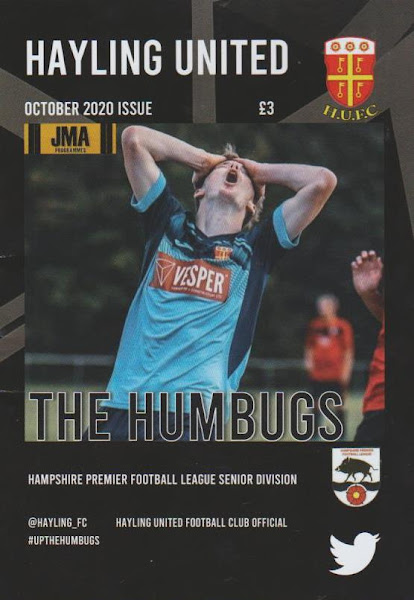 Ground Number: 936
Tuesday 13th October 2020
Hayling United 7-3 Chamberlayne Athletic
Hampshire Premier League - Senior Division
HAYLING UNITED FC - A BRIEF HISTORY
The club was established in 1884 as Hayling Island FC and were long term members of the Waterlooville & District League. They then joined the Portsmouth League in the early 1950s and would remain there until 1991 when they joined the Hampshire League. Starting in Division 3, a 6th place finish in their debut season was good enough for promotion to Division 2. They finished as runners-up in 1994, earning promotion to Division 1. In 1999, they changed their name to Hayling United and upon reorganisation, they were placed in the Premier Division. Despite a credible finish of 9th in their debut season, they were demoted to Division 1 and would remain here until 2004, winning the title in their penultimate season. They then joined the Wessex League Division 3, finishing as runners-up to Coldon Common in their first season and earned promotion to Division 2. It was the start of a highly successful few years for the club as they finished as runners-up to Locks Heath in 2006 to earn promotion to Division 1. It was a third successive promotion in 2007 as Hayling United finished as Division 1 champions. Their debut season saw them finish 12th, which was the best ever in the club's history. The club suffered relegation in 2013 as their ground was not fully enclosed and then a points deduction resulted in a second successive relegation the following year. They dropped down to the Hampshire Premier League Division 1 in 2014, finishing as runners-up behind Andover Lions in 2016 to earn promotion to the Senior Division. They've been there ever since and prior to last season being cut short, Hayling United were on course for a 5th place finish which would have been their best finish since leaving the Wessex League.
Hayling United have entered the FA Cup on four occasions but they have exited at the Extra Preliminary Round on each occasion. They made their debut in the FA Vase in 2008 and this represented their best-ever progress as they beat Carterton and Brading Town before a 4-2 defeat to New Milton Town in the 2nd Round. They also won the Hampshire Senior Cup in 2018. Famous players to turn out for the club include Chelsea legend Bobby Tambling who played for Hayling as a youth and came back to manager the club in the 1990s and even turning out for the team a couple of times, despite being in his fifties.The club play at Hayling College on Hayling Island, a popular holiday destination and the place where windsurfing was invented which has a population of around 17,000. It is well-known for its oyster beds and is the starting point for the Hayling Island to Paris bicycle ride which has been going since 1986 and has raised nearly £2m for good causes. 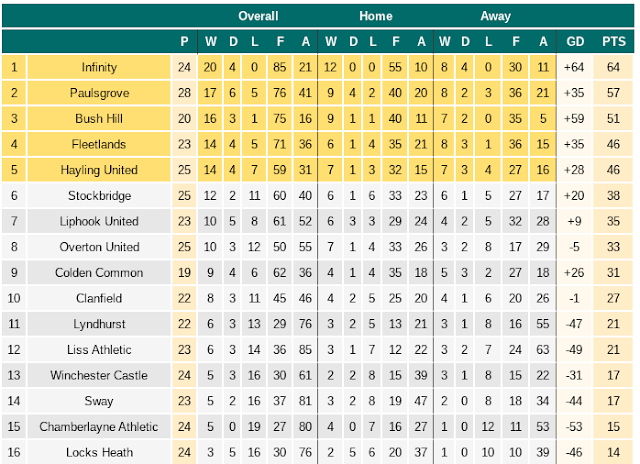 MY VISIT
I was on my own on this Tuesday as both my hoppers were busy. There were very limited choices that I could do with Anwar so maybe it wasn't a bad thing that he was off to Badshot Lea with another hopper. COVID-19 was limiting my choices up north with Leicester and Nottingham and Leicester badly affected and anything south would add an hour to my journey - not great when I was up for work at 4 am the following day. The FA Cup would have been preferable, but my nearest unticked ground was at Longridge Town, up near Preston. None of the revisits appealed either. So a league game it would have to be and so with all my options around the same time away, I searched for a 7.30 kick-off. Hayling United came up trumps and thankfully they were very engaging and helpful on Twitter. This was also my joint-nearest option at 84 miles away, showing a  mixture of how many grounds I've done at this level and the limited fixture list. It was my far the most interesting place geographically, being on an island, even if the ground was not the greatest from looking at pictures. Unlike the Isle Of Wight, there was a handy road meaning I didn't have to pay for exorbitant ferry crossings. I'd long wanted to visit the likes of East Cowes but it was £60 return with the car or a more reasonable £20 as a foot passenger and that was if you booked well in advance. I'd love to have done a double, even if it meant going over on Friday and stopping over, but there was never any games, probably with the difficulty with getting back for the away team. In fact, the whole lack of choice on Friday nights was disheartening, especially with it being proved time and again that attendances and subsequently, club finances get a big boost. 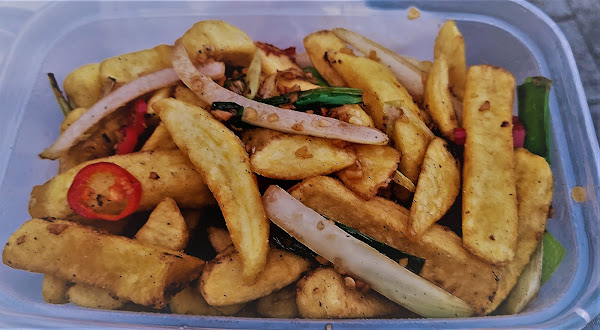 I spent the Monday afternoon drawing up a list of possibilities for Saturday, trying to concentrate at step 7 and below, what with my ever-dwindling choice of midweek options. In the evening, I started doing my research for this blog, including researching club history and food options. I received great news on Monday night that Colin wanted to come with me after our mutual friend Paul pulled out of going to a game at Fisher with him. It would add minimal time on to the journey and it would be great company and help with costs. On the day of the game, I had a good nights sleep, waking up at 8, four hours after I usually get up. I spent a few hours lazing about at home before walking to town and back. Whilst down there, I had a great pulled pork roll for lunch from Aldi for £1.99 and got a few other bits of shopping. After I came back, I spent another couple of hours at home, spending some of the time to write an article about the 1994/95 Premiership shirts for the Squires Gate FC programme. I got my stuff together and left at 4.15, picking up Colin 20 minutes later. We had a decent journey down for the time of day. I'd planned a visit to a Chinese takeaway in Waterlooville called Jade Garden. Here, I got my usual favourite of Salt & Chilli Chips for £3.50. They were really good, but the portion was a bit stingy for the price. From there, it was a 15-minute drive to the ground. We got a great welcome from a club official and spoke to Dan Bishop, the team manager. They gifted me a hot drink and were surprised we'd come this far for this level of game. We also chatted to some great Portsmouth fans throughout the game and it was probably the friendliest club I've been to this season. 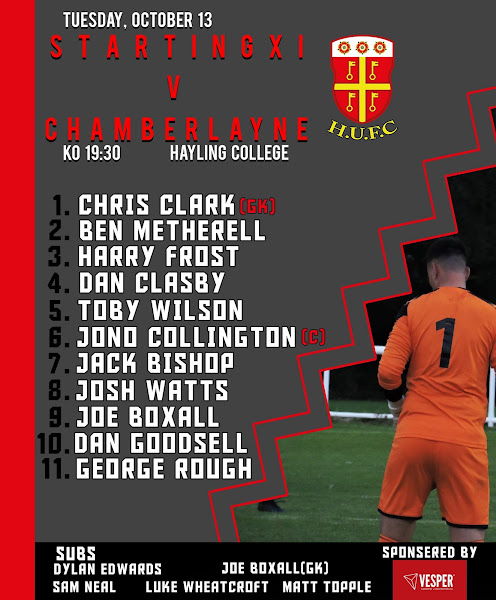 Hayling United were in 9th place and in mixed form. They'd had a slow start to the season with defeats to Infinity (1-4), Overton United (1-3) and Liphook United (2-3) in their first six games. They'd also drawn against Winchester Castle and Coldon Common (both 1-1). They'd been in better form in recent weeks with wins over Clanfield (1-0), Liss Athletic (5-1) and Saay (9-2). On Saturday, they'd lost 3-0 to Moneyfields Reserves in the Hampshire Premier Senior Cup. Chamberlayne Athletic were only being kept off the bottom by Lyndhurst. They were yet to win a league game with draws against Locks Heath, Infinity & Overton United (all 1-1) as well as against Sway (2-2). They'd suffered defeats to Bush Hill (0-12), Clanfield (0-4), Stockbridge (1-4) and Chamberlayne Athletic (2-5). The following match report will not be the best as I didn't note down the teams and the goals were flying in at a rapid rate. Hayling United took the lead after 5 minutes when a cross from the right was put home at the near post. They then had a chance to double their lead on 9 minutes but a goalmouth scramble saw the visitors survive. Chamberlayne Athletic took full advantage, equalising on 11 minutes after the Hayling keeper could only parry the ball.. Hayling were back in the lead on 13 minutes when a corner was headed home at the back post and it was 3-1 a minute later following a well-worked move. The game continued to flow and although the hosts were well on top, it was far from over as on 36 minutes a Chamberlayne man used his pace to get away from the defence to place the ball past the keeper and reduce the arrears to 3-2. Hayling restored their two-goal lead on 42 minutes with a flying volley at the back post. It was a pity I didn't get it on camera as it was a great goal but the hosts were 5-2 ahead a minute later, the left midfielder rode a tackle well, continued down the left and squared the ball for the striker to finish from a few yards out. 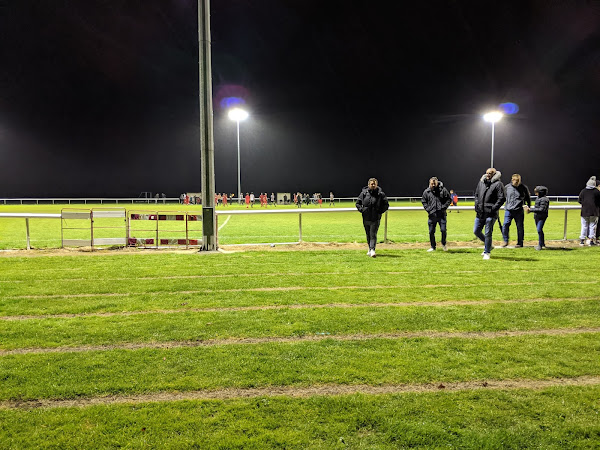 There was a quick turnaround with the second half starting at 20:24. It was 6-2 on 52 minutes when a diagonal shot from the right found the bottom left-hand corner of the net. Chamberlayne Athletic reduced the arrears on 77 minutes, making it 6-3 and though a great save and the post prevented Hayling United from scoring a couple of minutes later, they made it 7-3 in the last minute when a square ball was put in the bottom right-hand corner from 15 yards. It had been a decent night in good company and we were away by 9.20. The majority of the 74 in attendance would have gone home happy with the result. I dropped Colin back at Amersham at 10.50 and was home myself around ten minutes later. I got to sleep pretty quickly, dropping off just before midnight but I was a bit tired the next morning. Therefore, a mega ten-and-a-half-hour shift was not what I wanted, although I still got this blog done the following afternoon, albeit after my late finish meant that it took me 45 minutes rather than the usual 10 to get home. 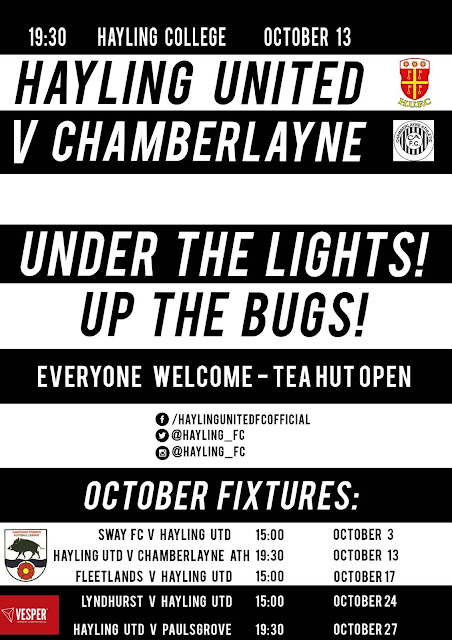 THE GROUND
HAYLING COLLEGE is a fairly basic setup by step 6 standards but is a very decent one for the level they play at. The pitch is fully railed and has hard standing and there are a decent set of floodlights that illuminate the pitch well. There's just the one small stand, seating around 20 but this was being used by the players to change due to the virus. There used to be a bigger metal stand, but it wasn't present on my visit. There's a tea bar with hot and cold drinks and snacks and a clubhouse was mentioned but I didn't visit. There's a chip shop called Nobbies around ten minutes walk away for those wanting a meal. There's plenty of parking too at the college. Overall, well worth the journey. 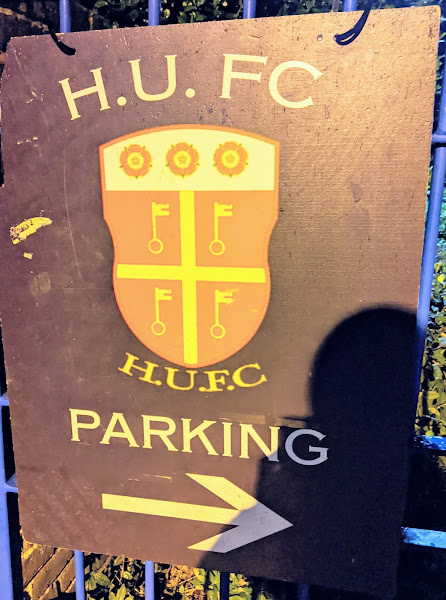 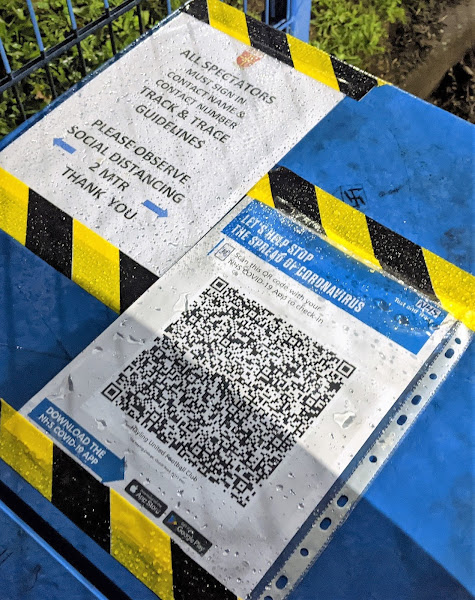 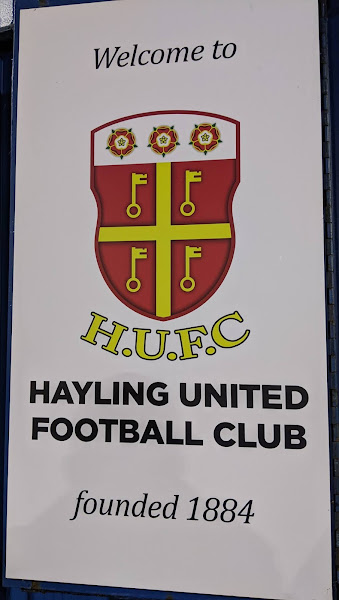 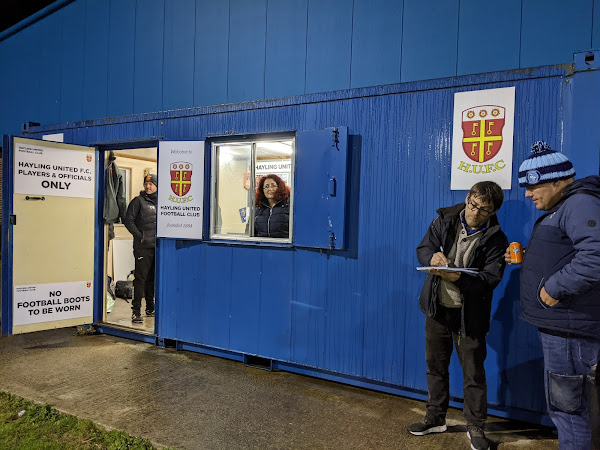 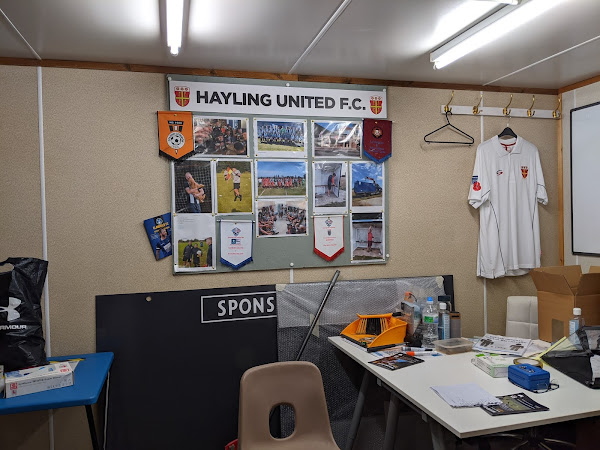 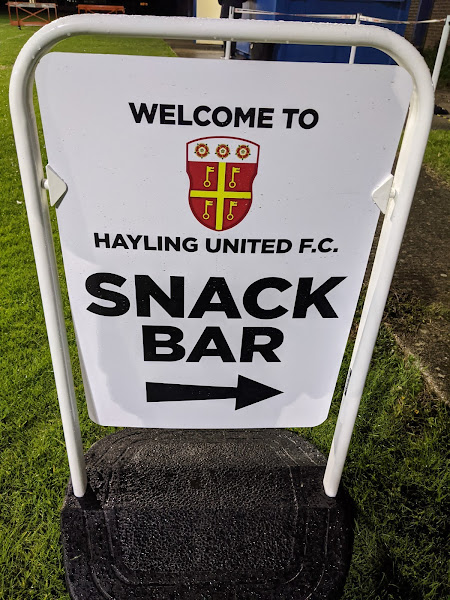 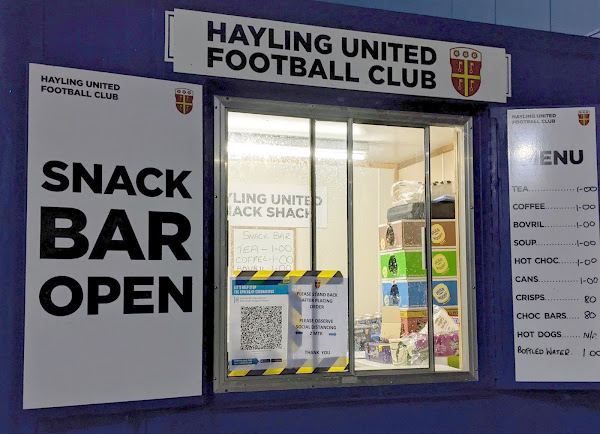 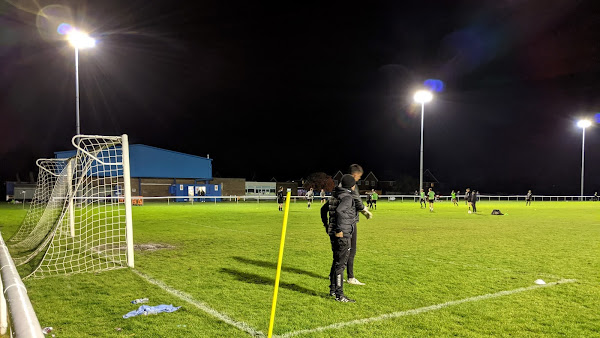 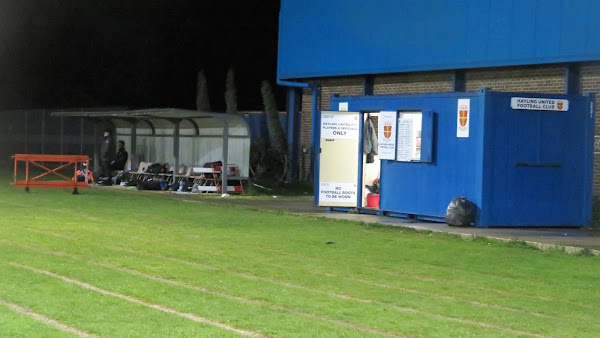 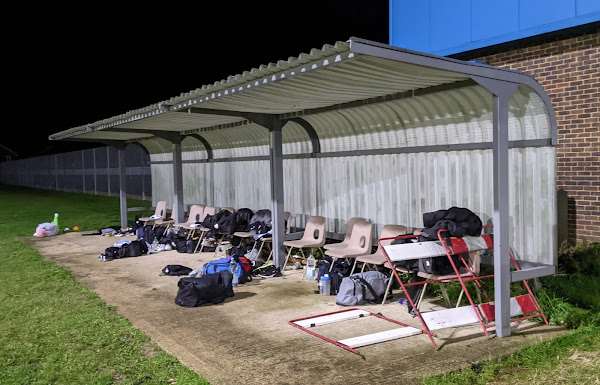 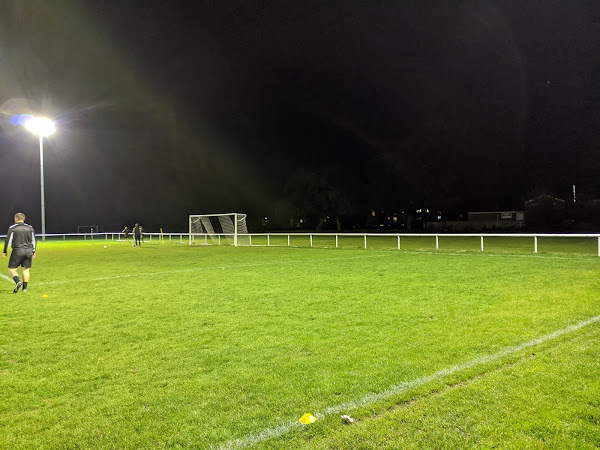 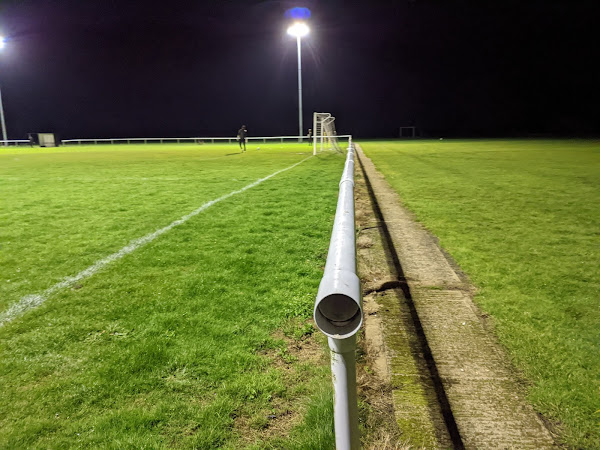 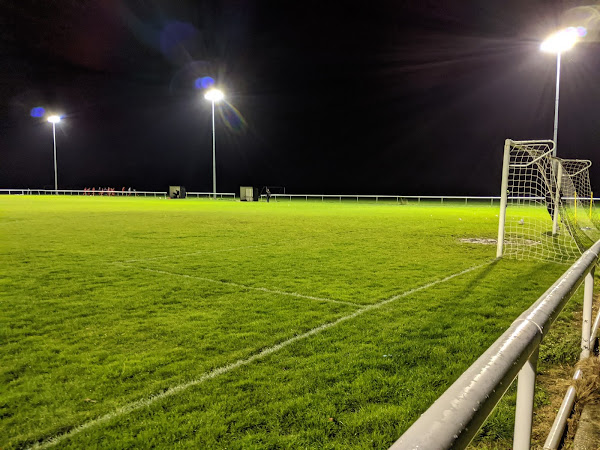 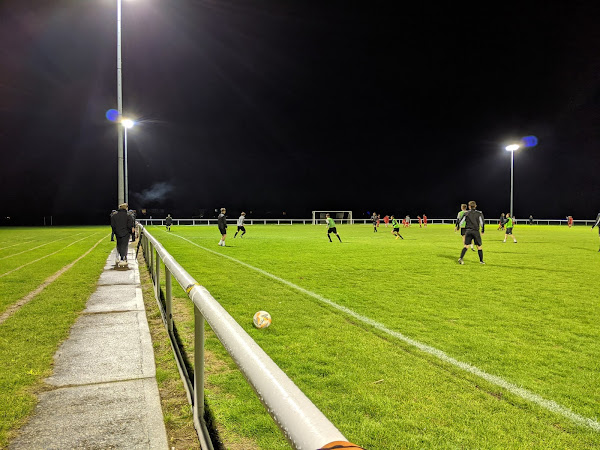